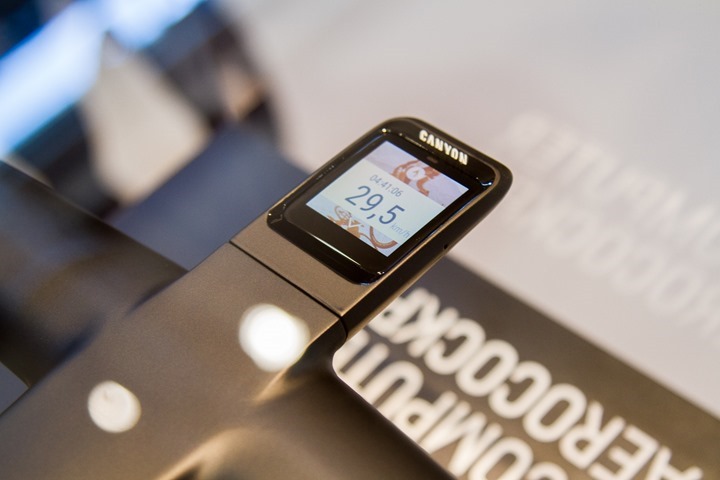 This past week at Eurobike, bike manufacturer Canyon was showing off their new bike computer prototype, which is based upon Android Wear.  The unit is simply called the ‘Smart Bike Computer’.  The use of Android Wear for a bike computer is a bit unique in that most (perhaps all?) Android Wear devices are wrist-based, as the branding sorta implies.  Still, the flexibility of the Android Wear platform certainly makes for an interesting way to create a bike computer.

Further, and more importantly – there’s already a fair number of Android Wear apps out there today.  But, let’s back up and understand the hardware first before we dive into software.

The unit starts with being built onto a custom bike mount that’d be available for future Canyon bikes.  It’s not actually built directly into the bike, but rather into different stem attachment pieces.  That design allows them to easily swap it out down the road if required (for either eventual upgrade or replacement).  It also allows you to slide the computer on/off to charge, or just remove temporarily from the bike. 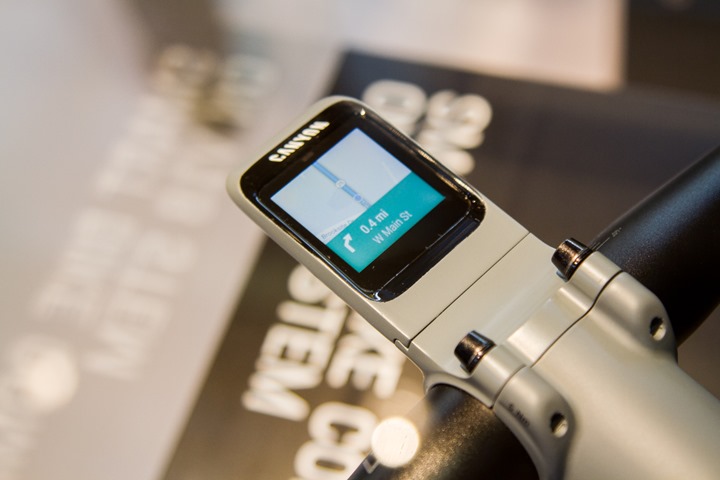 The bike computer includes GPS and storage built in (4GB), as well as of course Bluetooth Smart.  This means that it can connect either to your Bluetooth Smart sensors or your phone. 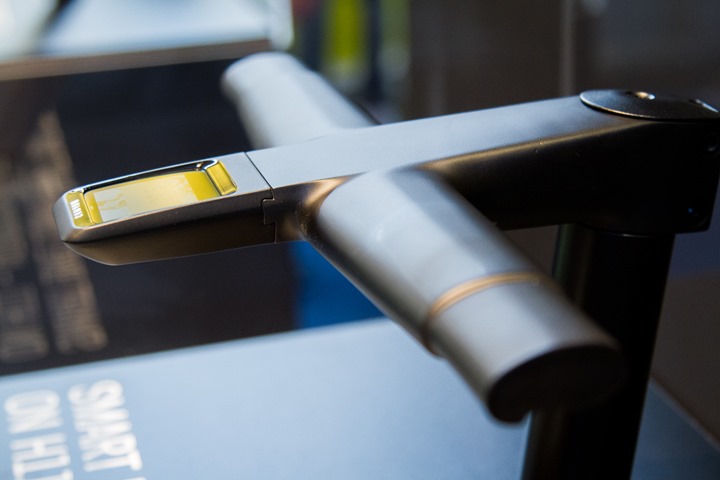 The unit it designed such that you can start or stop a ride without you having to have a phone on you, giving it a bit more freedom than some phone reliant devices (such as the Wahoo RFLKT/RFLKT+).  But at the same time, the Canyon unit also relies on the phone for extended functionality (such as updates or internet connectivity).  Note that some 3rd party apps may require phone connectivity at all times. 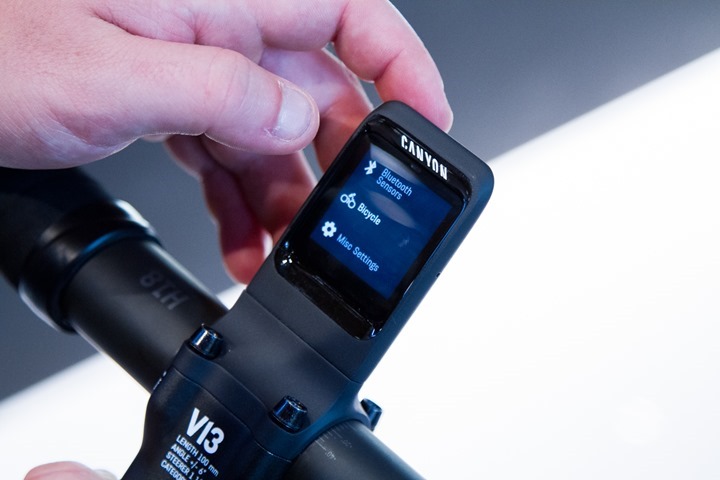 The Smart Bike Computer includes a 1.6” trans-reflective LCD capacitive color touch screen.  On the (dry) show floor the (albeit beautiful) touch screen was pretty finicky, though the Canyon person seemed to indicate it was a known issue that’s fixed on other units.  That of course will be a key aspect of any touch screen device used in cycling – especially when looking at conditions like rain, sweat, and cycling gloves.  While companies like Garmin and Polar do have touch-screen cycling devices, it often takes these companies quite a bit of time to get the touch functions working well across a wide range of environmental conditions.

They had three different stem connected options there, one for a mountain bike, one for a general commuter bike, and one for an aero bike. 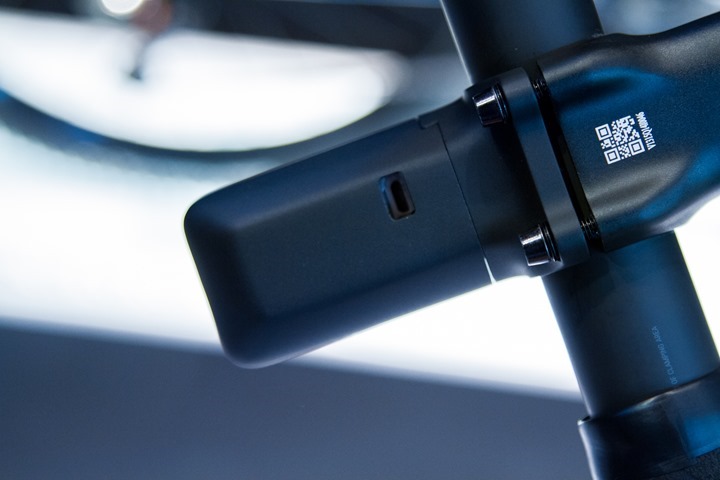 Finally, the unit has a micro-USB port on the bottom for charging.  The current plan is to get about 8-10 hours of battery life, though right now they’re getting about 6-8hrs.  That sort of difference is actually pretty normal though for products early in the development cycle, so that’s actually pretty good news that they’re getting as much as they are this early with as vibrant a display as they have packed in there. 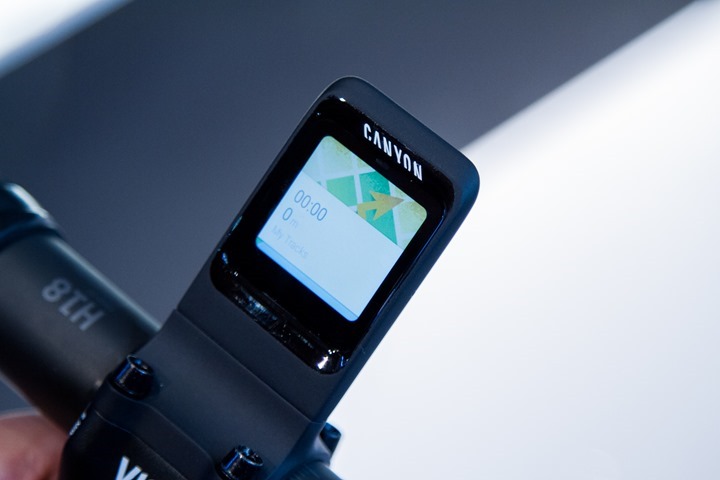 Next is the app side, which is arguably where the coolness is.  To start they do have a base bike computer app of their own.  That means that you can get core metrics like speed/distance/etc using either the internal GPS functionality or paired sensors.  Note that it doesn’t depend on your phones GPS, so that’ll reduce battery drain on the phone side.  Further, the unit will allow you to pre-load maps for given areas ahead of time to the internal storage. 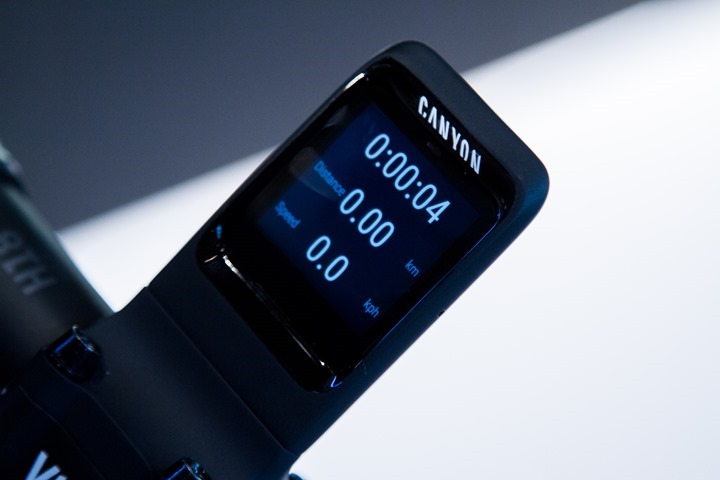 But the real coolness with an Android Wear based concept is the 3rd party apps.  After all, if you’re going to go to the trouble of developing an open device, it’s because of the accessibility of 3rd party apps.  And best of all, those apps already exist today for Android Wear.  For example: Strava, MapMyFitness (MapMyRide), Komoot, RunKeeper, Runtastic, MyTracks, and more are all already available. 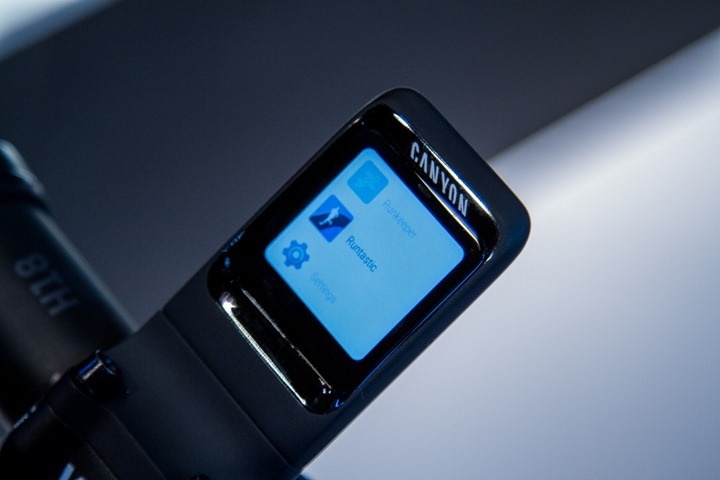 And then you’ve got even stock Android apps like Maps (Google), and Google Fit, and even just the simple photos app.  All of these are accessible from the touch screen too.

Now one challenge is that you do have to keep in mind that the Android Wear versions of these apps are different than the Android versions.  Sorta like how the Apple Watch versions of apps are dramatically different than the iOS versions of apps.  You might have 1/50th the features in the watch versions of an app, for example.  Part of this reason is simply the low adoption rate of these apps.  Companies like Strava, MapMyFitness and others know that there are realistically only a handful of people actually using these watch variants today compared to their full blown apps.  And thus they focus their resources elsewhere in their product lines. 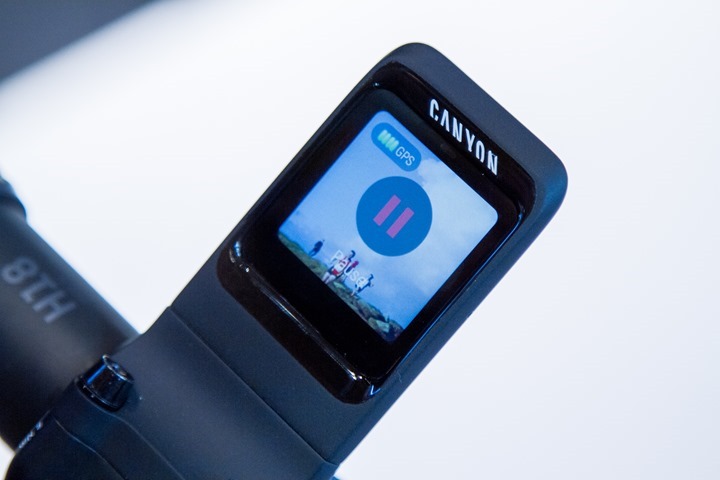 As a general rule I’m always very hesitant on the idea of integrated bike computers with bikes.  Why?  Well, technology advances very quickly – usually far quicker than you’ll buy yourself new bikes.  It’s sorta like when you get into a bit older car and look at the stereo/nav system and just shake your head at how old and clunky it is?  Well, that’s today’s technology 5 years from now.  So if you’ve got something heavily tech-focused that’s permanently there – that’s kinda iffy years from now.  Versus a standard bike computer you just go out and replace as needed.

On the flip side, Canyon has designed it so that it slides off, meaning that it’s really just the mount piece that’s on the bike.  So in their case you could indeed swap that out down the road, or just get rid of it easily all together.  So that’s definitely good.

Next, the Android Wear concept for a bike computer is rather interesting – though also keep in mind at present it’s limited to Android devices (Update: As of just this afternoon, Google has announced compatibility with iOS).

But the last catch?  Well at this point they’re saying it won’t be available till Spring 2016 – which is an eternity in the bike computer space (let alone fast moving software platforms like Android Wear).  It’s also an eternity when it comes to anticipated timelines, so if you take that Spring 2016 timeline and apply the usual bike tech delay factor they’re really probably talking Eurobike next year.  Though the pricing of 200-220EUR isn’t too bad.

It’s also important to note as well as that Canyon has a long history of showing off really cool technology stuff at bike shows.  But they have an equally long history of never actually delivering those concepts to market.  Meaning, it’s cool that they’re pushing the boundaries of connected bikes, but I certainly wouldn’t make any purchasing decisions on these concepts until they actually ship one of them (any of them).