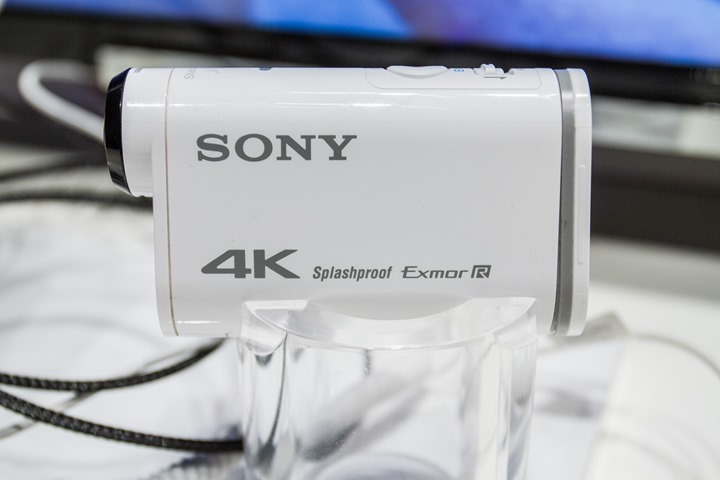 Last week at CES Sony announced their latest action cam, the Sony FDR-X1000V, which is capable of shooting 4K video.  They also updated their HDR-AS camera line with a new 200V version  (HDR-AS200V).  These came as a surprise to approximately nobody.  The reason being Sony aligns to just as much clockwork as GoPro does when it comes to action cam releases.  GoPro in September/October, and Sony at CES in January.  Wham, bam, thank you ma’am.

However, despite that predictability, Sony continues to really push the envelope on coolness that extends beyond just straight image quality.  And to a certain degree they probably don’t get enough credit for it.  But before we get there, let’s just briefly note the 4K aspects.

The FDR-X1000V supports 4K in the following frame rates:

Now what’s somewhat interesting here is that unlike GoPro series neither the X1000V nor the AS200V support 2.7K video as a ‘middle ground’ for increasing frame-rates.  The GoPro Hero4 Black for example can step down to 2.7K at a slew of frame rates upwards as high as 50fps.  The Black also has a 1440p mode upwards of 80fps, and the GoPro Hero4 Silver can hit 2.7K at upwards of 30fps. 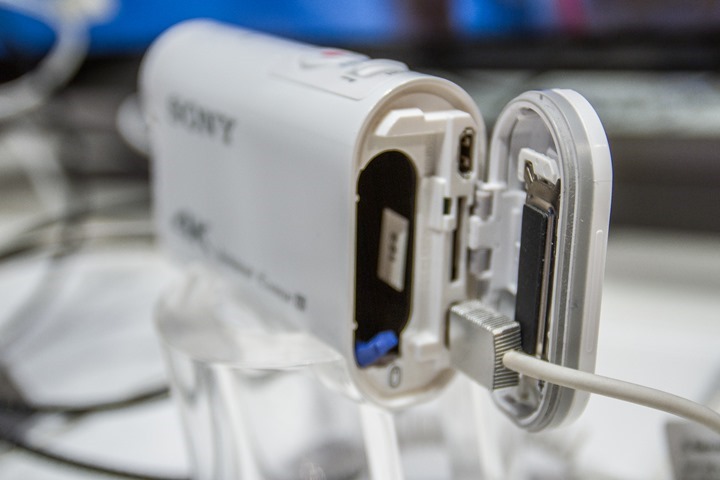 Outside of the image quality updates, both the GPS-enabled FDR-X1000V and HDR-AS200V did receive exposure control, and new white balance & color temperature override mode, which from talking to the guys at the Sony CES booth is roughly in the same vein as the GoPro ProTune mode that allows a bit more control in post production in those areas.  Both units also got wind noise reduction capabilities.

Finally, they also get the new highlight reel function I talk about a bit later in the post.

(Side note: I always enjoy talking to the guys that Sony brings to CES each year to staff the action cam portions of their booth – they actually know their products technically quite well.  Something that the GoPro booth folks rarely manage to pull off.  In general I find Best Buy folks know more about GoPro units than the GoPro staff at the booth do.)

Do note that at this point the battery life is still to be determined.  This will definitely be a big ticket item because with 4K footage on the competitor GoPro Hero4 Black you’re basically looking at about 60 minutes of battery life (on a good day).  Sony says they’ll release that information closer to release.

One other disappointing item is that Sony didn’t update the rather dated LCD screen on the side of the camera.  There’s nothing wrong with a small monochrome LCD.  GoPro has such a display, except GoPro’s is actually a very clean interface.  The Sony is simply not; and clunky to navigate.  Plus, the GoPro Hero4 Silver now has a full color touchscreen on the back for those that want it, whereas Sony has no such built-on offering aside from a separate wrist remote. 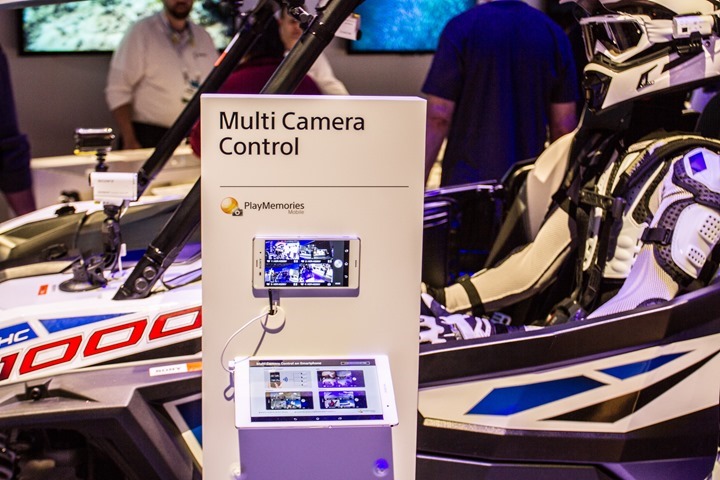 Now, while everyone is focusing on all the 4K stuff – it’s actually the multicam preview capabilities that’s really cool.  Currently most cameras on the market allow you to control all the cameras at once through various remote systems.  But what they don’t allow you to do is to concurrently preview all these action cams.  This meant that you either had to manually connect to each one via individual WiFi networks and preview them one at a time, or, just hope for the best.

With an update planned for this spring, Sony will bring multi camera control to all their recent action cameras – anything that supports the WiFi Direct, which is pretty cool.  Below you can see the cameras showing live as seen mounted around in the above photo.  If you look around the vehicle you’ll see some of the action cams shooting the various shots below (including of me). 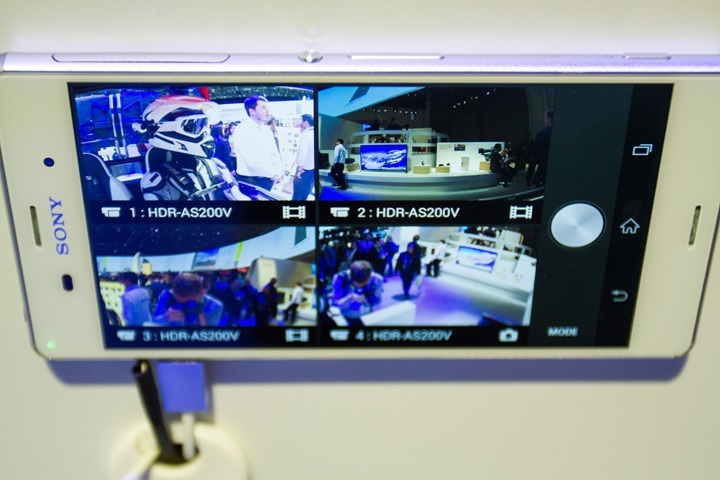 That will come to both iOS and Android apps as part of PlayMemories Mobile 5.2.  It will be able to support up to five concurrent action cams with preview – inline with what their latest WiFi remote (RM-LVR2) can do. 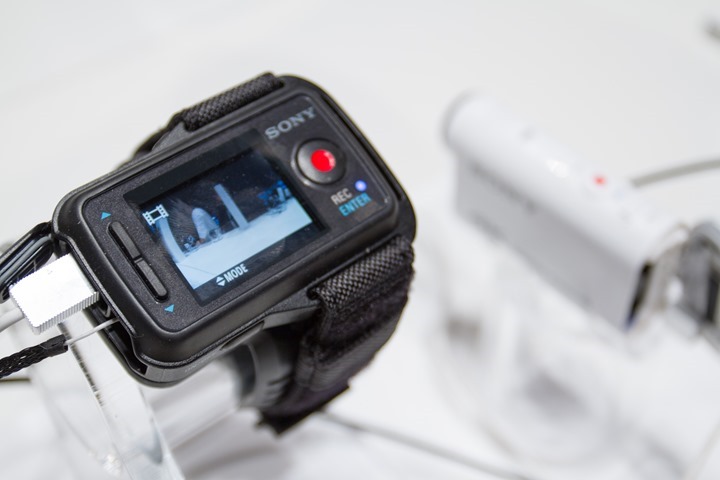 For those that might be a little bit unsure of what all this means, this diagram helps to explain it a little bit.  The most important part is that you’re concurrently both controlling and previewing the below four cameras at once.  All other solutions out there today can only trigger the concurrent start/stop, not the concurrent preview. 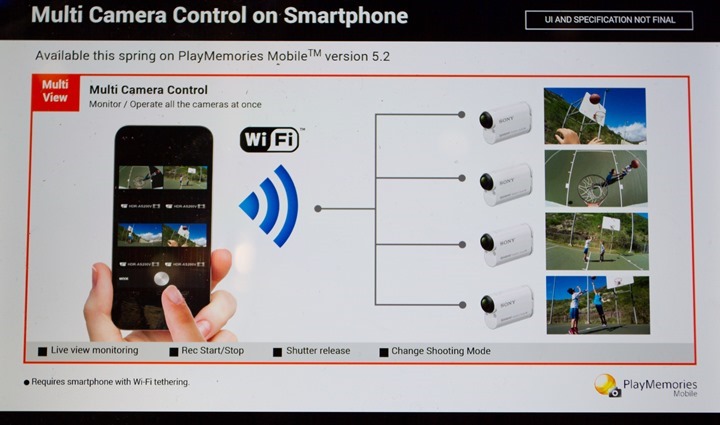 It’s worth noting that Sony’s desktop software is very powerful when it comes to taking all of this footage from multiple cameras and then giving you multi-cam videos (for example, split screen).  It’s an area that both GoPro and Garmin really lack in, especially since both of them have remotes to trigger such multi-cam operations.  I’ve never understood why they bother to provide that capability in hardware yet lack the follow-through in software to put cool split-screen style videos together.  Sony definitely delivers there.  Plus you’ll get all the cool GPS overlay information too.

A Few Other Software and Hardware Notables: 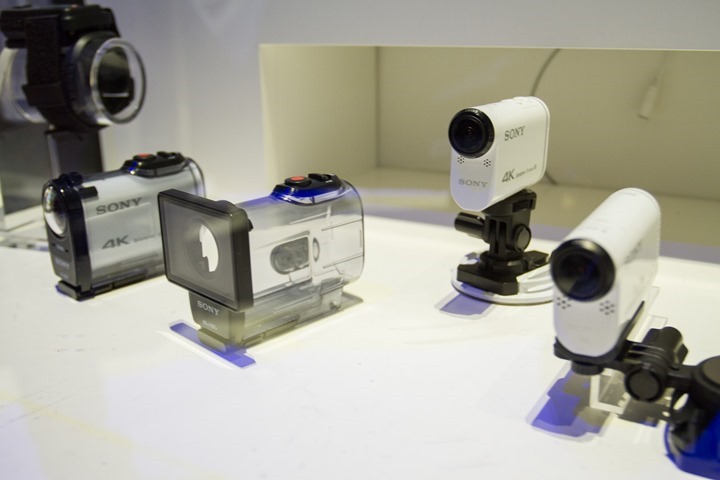 Now in addition to the above, the X1000V and 200V will get a new highlight reel feature.  They say this will automatically spit out a few-minute highlight reel from your day, using facial recognition and scene detection to determine what’s ‘important’.  You’ll remember one or two Kickstarter projects recently that are also doing this for GoPro footage, but with the concurrent use of an Android phone.

In the case of Sony, they’re lucky in that both of these units contain GPS chipsets on them, so they can better analyze things like speed changes and likely GPS elevation as well.   By focusing on shifts in those metrics they can reasonably predict ‘exciting’ things.  Or at least, that’s the theory.

Moving towards hardware items, Sony has expanded their mounts with this release wave.  This includes a new waterproof case for the X1000V (seen left above), along with a different dive door for better focusing (seen middle left above).  Also, both a helmet mount (seen far right above), and then a board mount for surf and snowboards (seen middle/back above).

Next up we’ve got a sweet little mount for the DJI Phantom2.  Note that it isn’t a gimbal mount however, which is kinda a bummer.  So that means that it won’t quite be as smooth as video shot by gimbal mounts (like what’s available for the GoPro series). 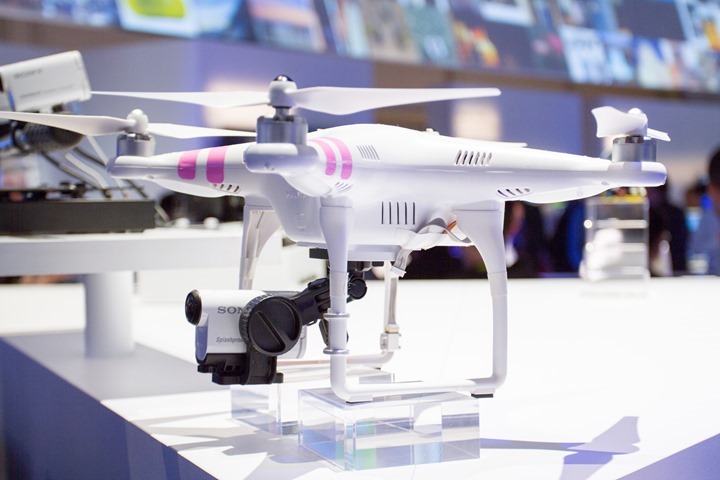 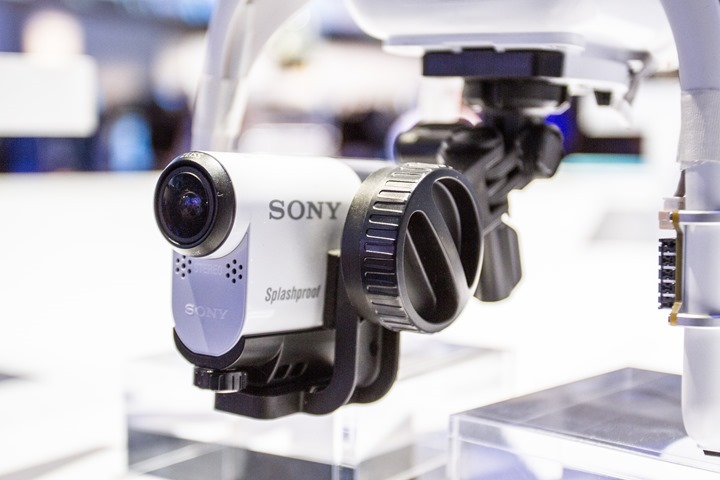 Now, the only odd part is that nobody could seem to actually provide me the name of the 3rd party company producing above said mount.  Not for lack of trying on their part, it was just the one area where a large lot of folks couldn’t seem to find the answer. 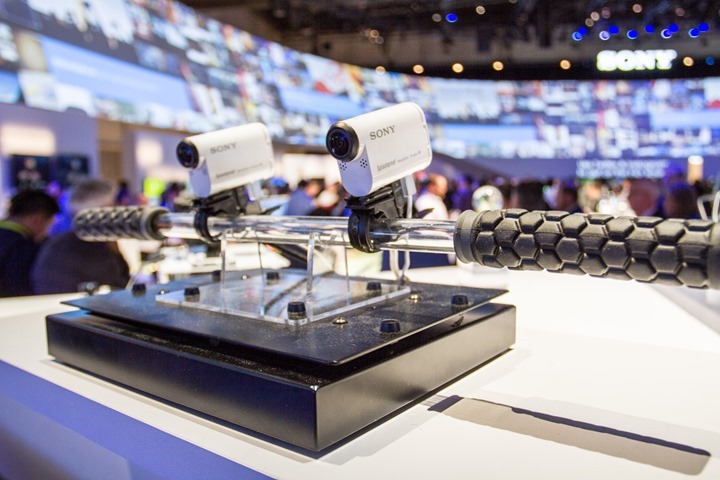 Here’s a short clip I shot of it in action. The left TV screen is with stabilization, and the right is without.

Pretty neat stuff.  Anyone want to build one of those for me?  Love it!

Welcome to CES 2015 posts! Don’t forget to check out all my CES 2015 coverage, as well as a slew of updates that were only seen on Twitter.  It was a crazy busy week!

Update: You can now order the latest Sony Action Cams via Clever Training.  In doing so you not only help support the site, but also save yourself 10% and get free US shipping using coupon code DCR10BTF!  There are basically four SKU’s, one for each camera and then a variant with or without the Live View remote/display wrist band:

As a reminder, the 1000V is the 4K capable cam, and the 200V is the smaller unit that’s not 4K capable.  The Live View remote is identical no matter which camera you choose.

Thanks again for your support via Clever Training!