Sometimes, I don’t know where the weeks go.  Before I knew it, I had flown to Wales and back for work, and it was already the weekend.  While I’ve still got to post my Wales Runaround from last week, here’s a look at our weekend!

1) Enjoying touristy Paris with friends from the states: 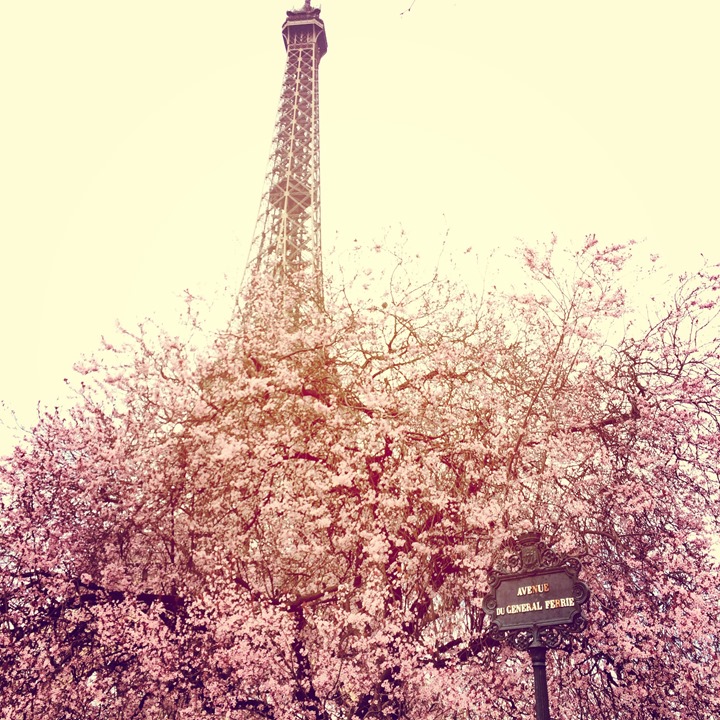 We had some good friends arrive on Saturday from the states, and since then we’ve been showing off the city.  Thankfully, the city has largely cooperated with great weather thus far, and even better weather planned for the rest of the week.

While overdoing the obligatory Tour Eiffel walk-through, I noticed this tree blossoming.  Given our highly warm weather this winter, I can definitely understand the flowering already – and definitely not complaining!

I’ll get more photos of our antics later this week.  Good times!

2) Watching a short bit of the Paris Half-Marathon

This weekend was the annual Paris Half-Marathon.  I ran it last year with The Girl.  This year, the race was scheduled a bit earlier than I anticipated – the first weekend in March as opposed to mid-March.  So with completing the Barcelona Marathon just two weeks ago, it didn’t really fit the training schedule/blocks too well.

No worries, I just integrated a spectating tour of it into my long run on Sunday. 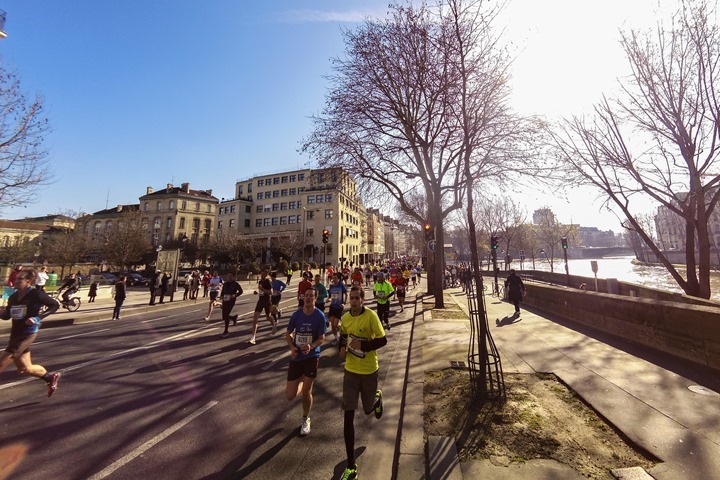 The race started around 10AM (*love* the late starts…), and by time it swung down to near our place it was about 45 minutes later.  We’re roughly the half-way point at the turnaround near Hotel de Ville.

I continued running upstream a bit on the sidewalk.  Below, along the canal leading to Bastille with one of the music acts beating away. 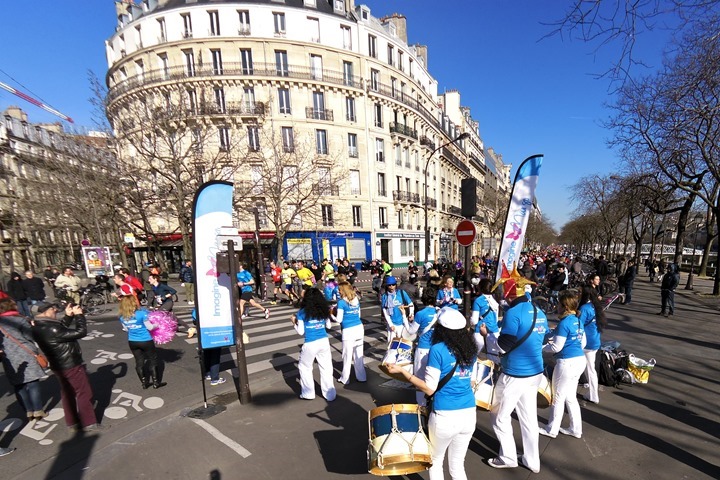 I’d actually cross the route twice on my long run round.  Of course, it’s fairly easy to cross, you simply run with the crowd for a short bit slowly working your way over. 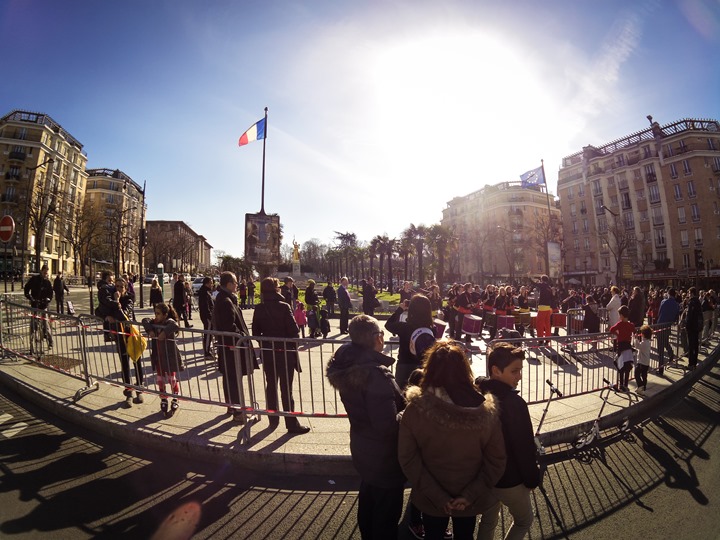 At this point in the race there’s enough separation that it’s easy to make the crossing seamlessly. 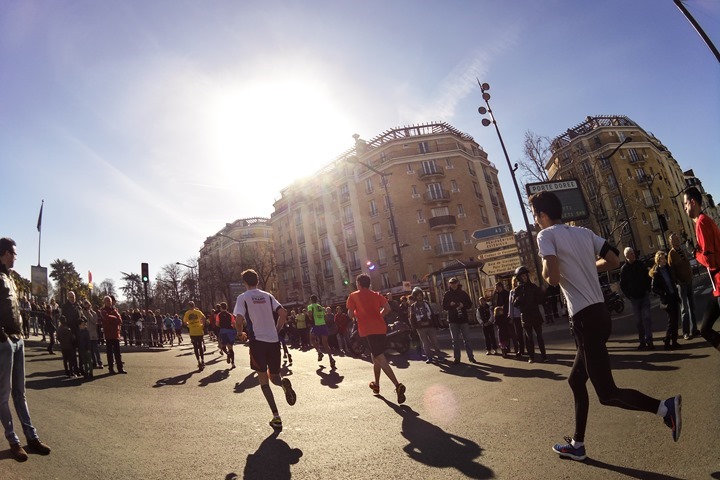 Congrats to all the runners (and numerous DCR readers) that ran yesterday.  And it was cool to hear a few of you (runners) shout out my name as you saw me along the course.  Quite surprising that anyone would notice me!

As noted above, I had started my long run roughly a short bit after the half-marathon started.  I stayed along the river working my way opposite the runners, heading away from the center of town.  My goal was to run the other half of the perhipherique that I ran last weekend.  That’s the ring road around Paris.  Like last weekend, I wasn’t technically running on the ring road, since that’s a gigantic highway.

Instead, I was running along the fairly new tram tracks that are just inside of the highway.  The path has bike/pedestrian lanes along the vast majority of it.  Oh, and as you can see – it was beautifully sunny and warm out – about 60°F. 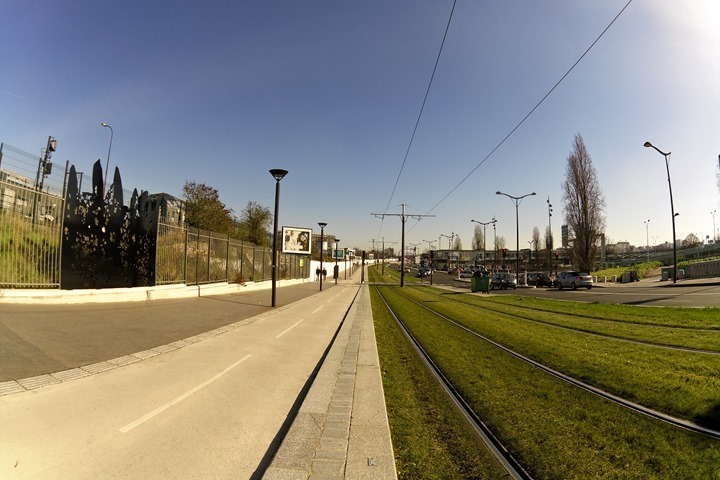 For the first few miles, the tracks were actually closed down, due to the half-marathon crossing it in two places.  Here, you can see the tracks headed into the runners just up ahead beyond the medics. 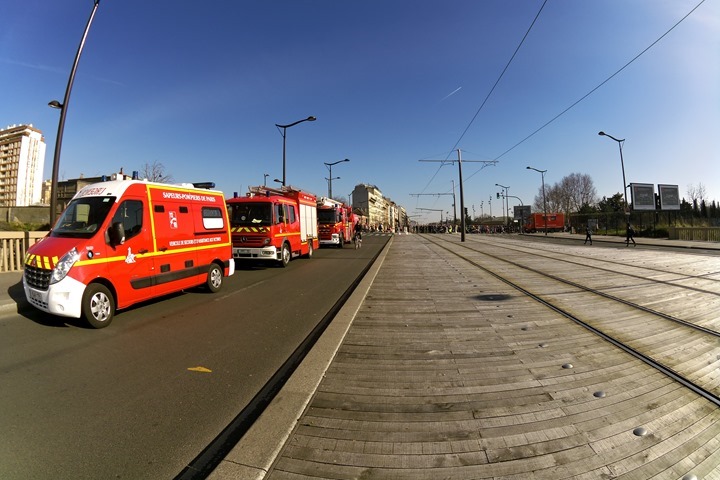 The best part about this route is that it’s un-screw-up-able.  You simply follow the tracks.  Forever. 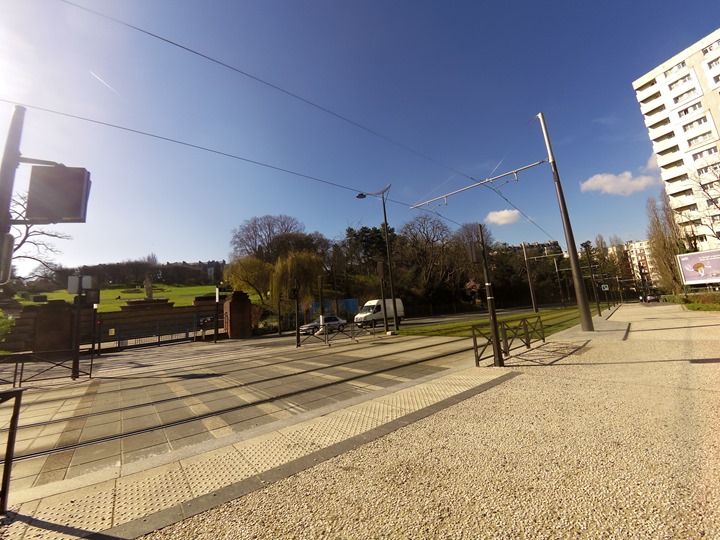 It was cool though in that I’d never run up that way (north).  And I was somewhat surprised away by how nice it was along the tracks.  I guess I always assumed that area was a little less nice.  Below, crossing a canal that has more running paths and is also being re-done to make it even more walk/runner friendly. 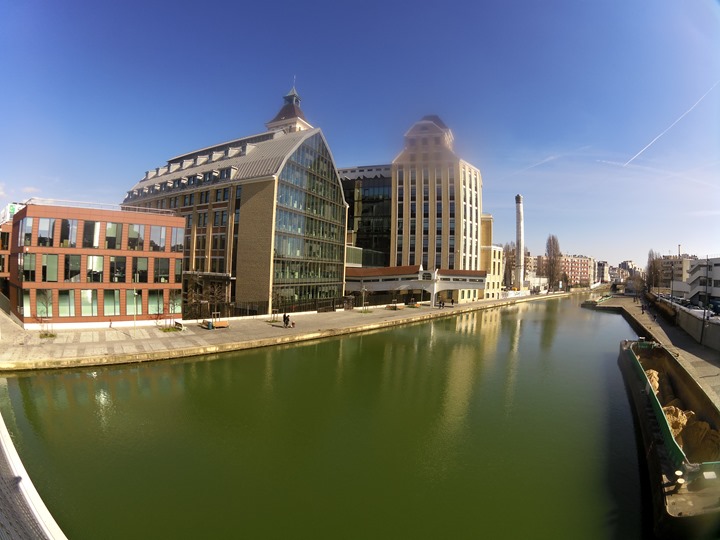 Now, eventually the tram tracks do end for a short distance.  Thus it goes about 90% the way around the circle, but not this one stretch.  Which is sorta strange because there’s some old derelict tracks right next to where this ends, that ‘completes’ the circle.  Perhaps that’s next, since large portions of the route were just finished this past summer. 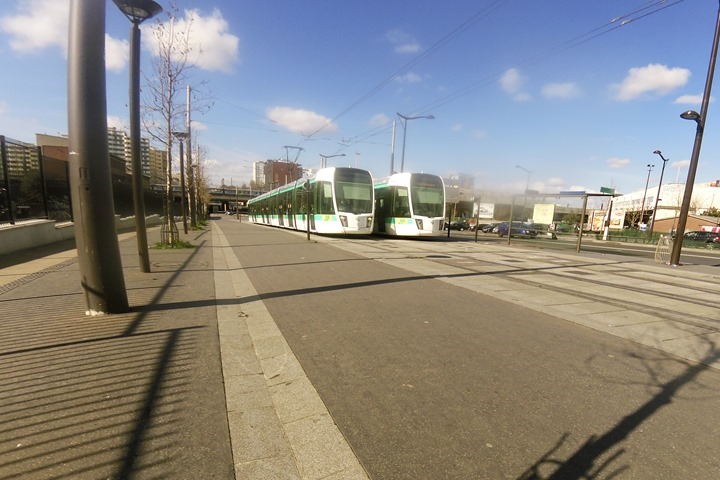 After I left the loop, I headed inland back directly across the city, passing the Arch along the way. 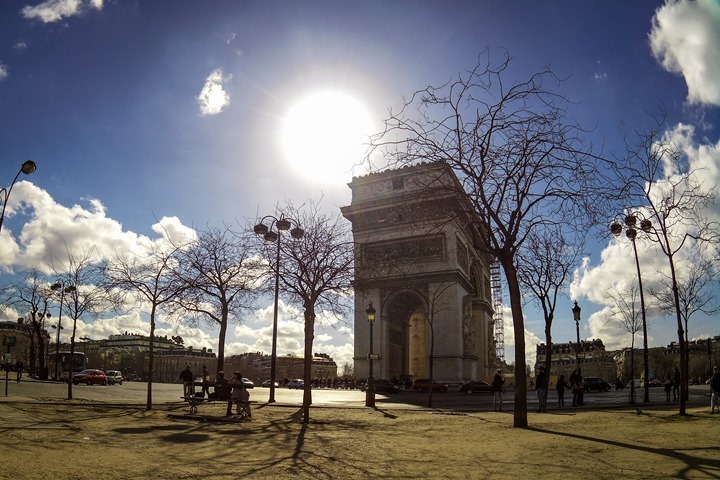 Once I passed the Arch it was three miles to home, and also the last 20 minutes of my 2hr and 10min workout.  For this last section my schedule had me bumped up to race-pace.  Which is both easy and hard coming down the Champs-Élysées (below).  It’s easy in that it’s downhill.  It’s hard in that you’re dodging more people than you can shake a stick at. 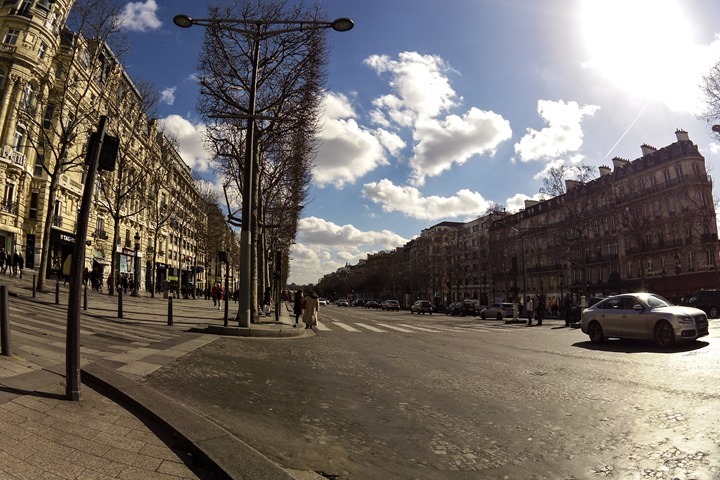 With about a mile or so left to go, I dipped into the tunnel that’s closed on Sundays for pedestrians and cyclists. 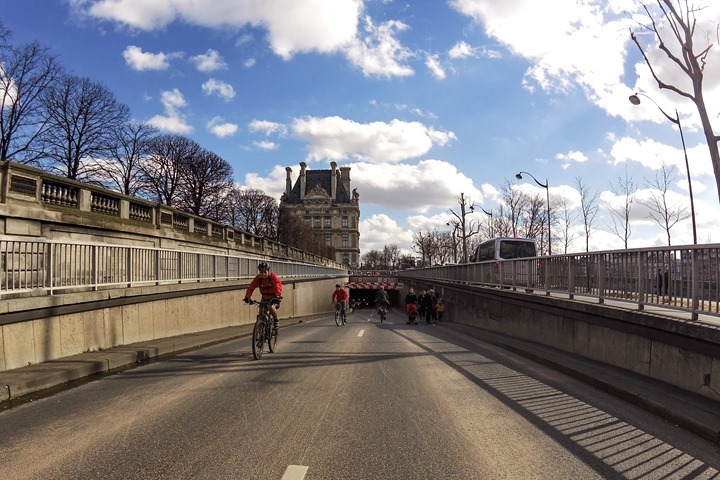 The tunnel is fairly long.  Perhaps 1/3rd to 1/2 a mile.  So perfect for testing out various internal pace systems in many of the new watches. 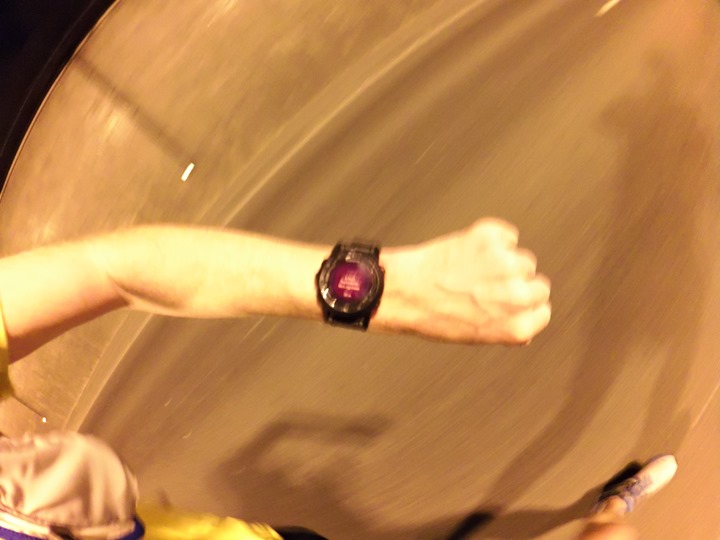 Once I popped out – blue skies and clear roads along the river for the remainder of the run home. 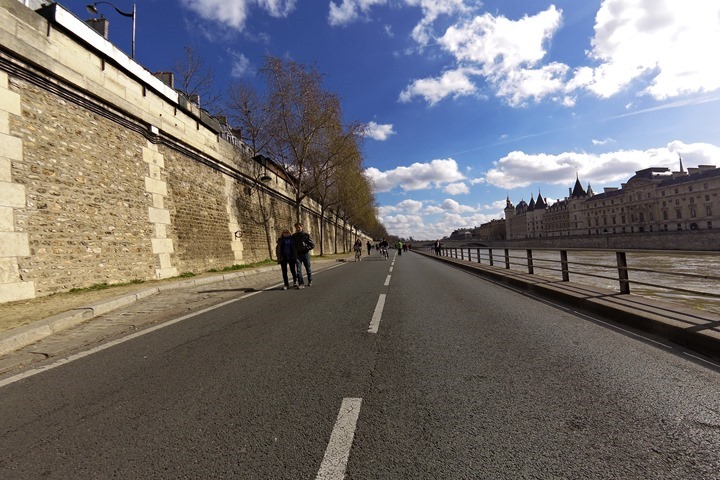 A perfect day for a run!

4) Cycling to the market, grabbing ingredients for dinner

Post run, I zipped right back out again on the bike share Velib bike to try and get to one of the markets in time to pickup ingredients for dinner.  I was sorta successful.  I had to tweak the planned menu a bit since a few of the stalls had already packed up by time I arrived. 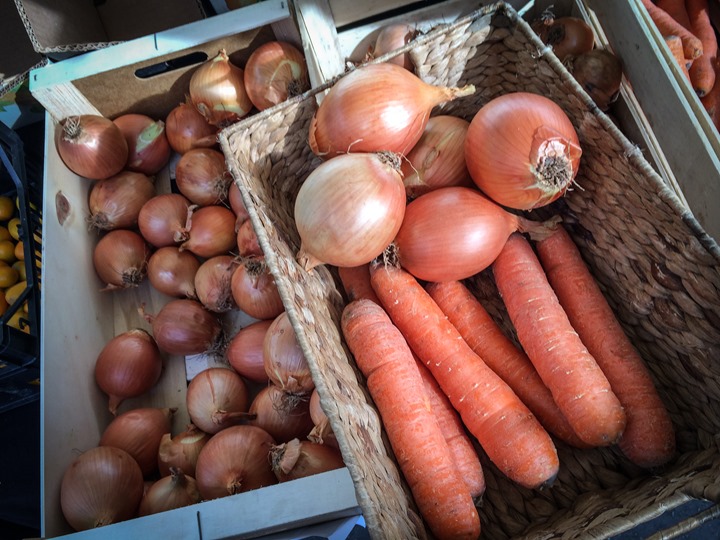 So I grabbed some ingredients there and then biked a few miles away to another market that I knew was also close to closing, but figured I might luck out.  Below, the tops of celery, in case you were wondering. 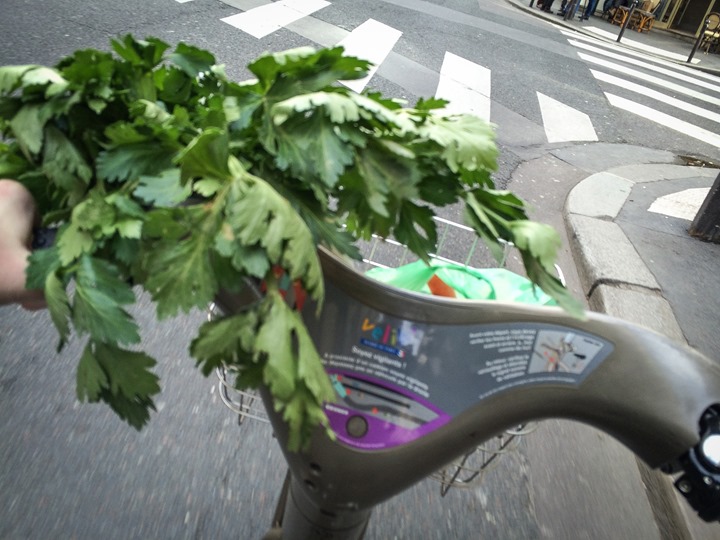 When I arrived at the bike lanes next to the market – I was definitely too late (I went past the house, so I dropped off stuff there).  The stalls were torn down, and the lane cluttered with remnants of the market.  Within an hour it’ll be cleaned up and look pristine, but in the meantime, it looks more war-zone like. 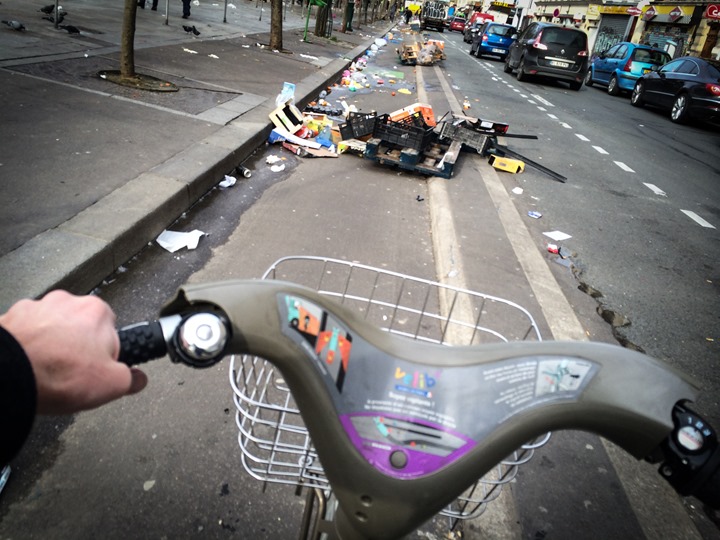 Which, is also how the streets looked 5 hours after the marathon, with water bottles everywhere near the water stops: 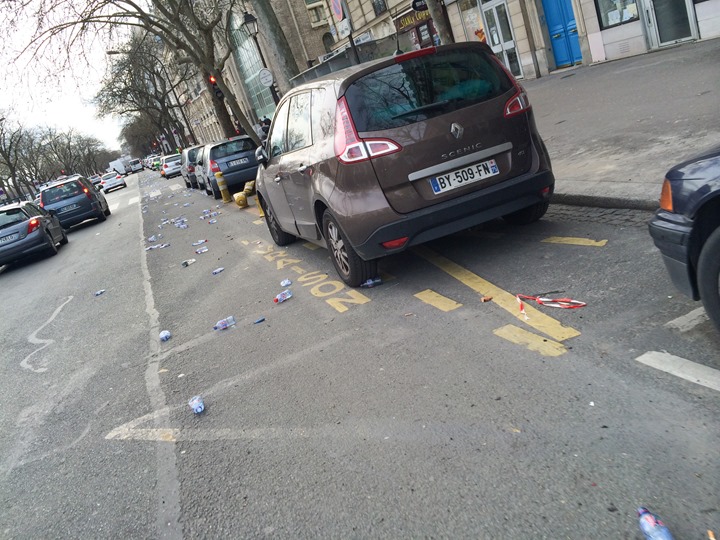 They were slowly working their way down the course cleaning these up too.  But in the meantime, if anyone needed a spare plastic bottle or 10,000…you were golden. 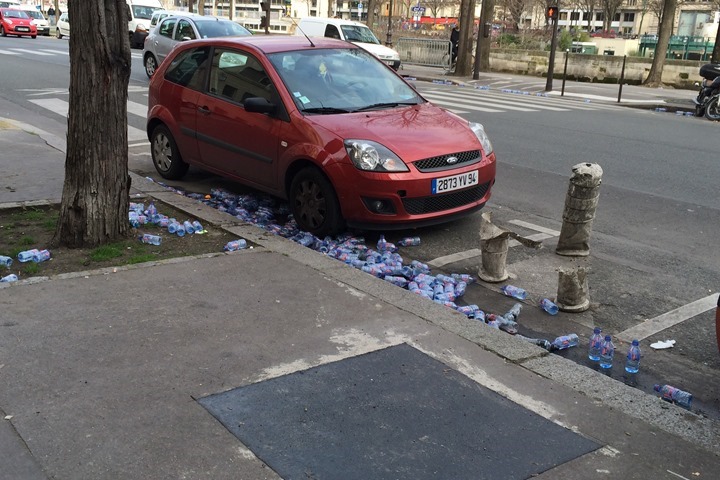 For dinner, The Girl took all the ingredients and whipped up some green apple and chorizo risotto, which used the carrots/celery/onions that I picked up, all minced. 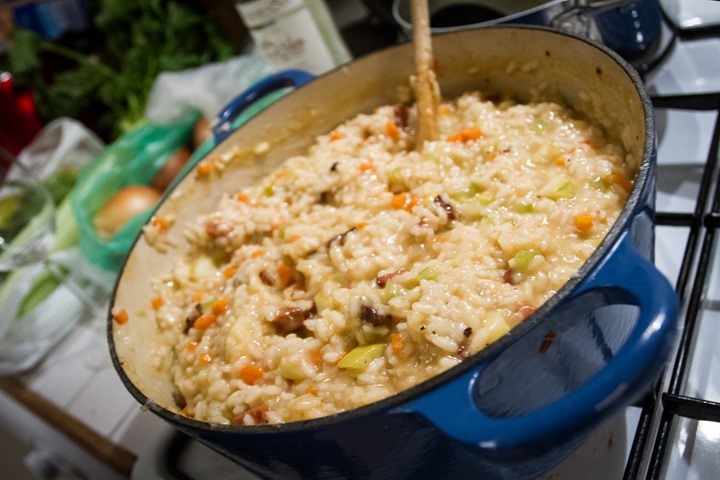 5) Some movies were shot 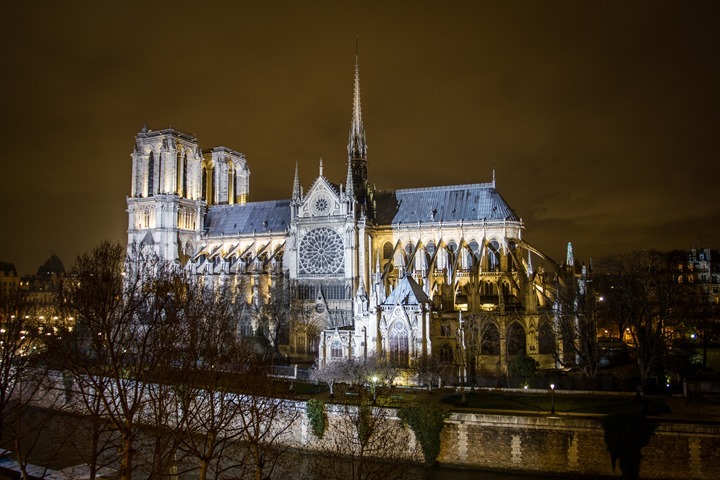 This weekend saw multiple productions – potentially related, potentially not.  There was some sort of car scene going down at one point where they blocked off our road for a short while, along with some big bangs/explosions.  Then, later at night they actually lit up Notre Dame.  Now that may sound normal, but in reality, it’s quite different.  Normally the church has much less powerful lights that shine upwards on it that are on daily till around 12AM-1AM.  Except this time, the above shot was lit by giant spotlights from across the river.  You can see them here: 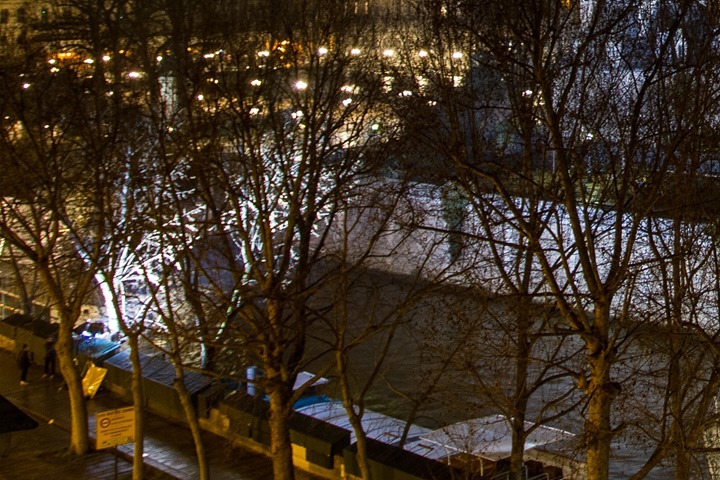 The next day, there was more activity on the bridge in front of the church, as well as below it.  Two separate shots.  There was a woman in a red dress hanging out with lots of cameras fawning over her. 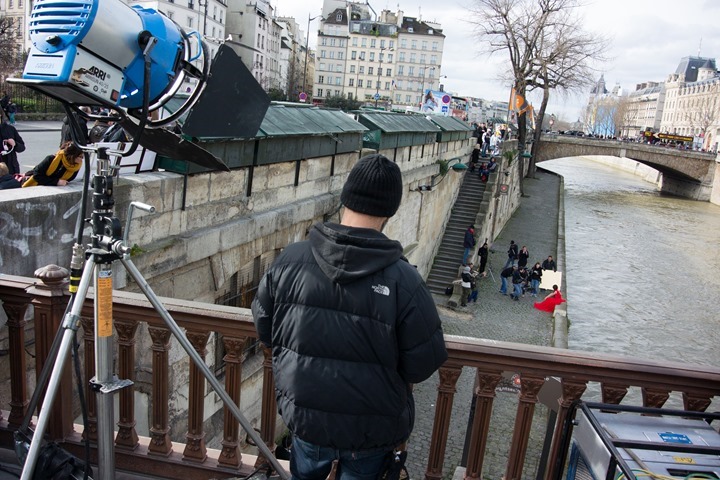 And then another crew that was likely waiting for the action to come.  They lacked said woman in red dress, and thus looked bored. 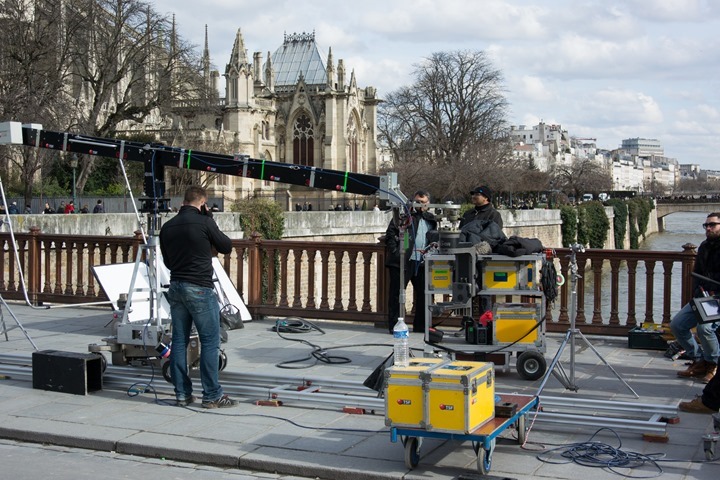 We’ve seen everything from them making it snow on our block to cars going into the drink.  Always entertaining.

With that – thanks for reading!  Enjoy the week ahead!