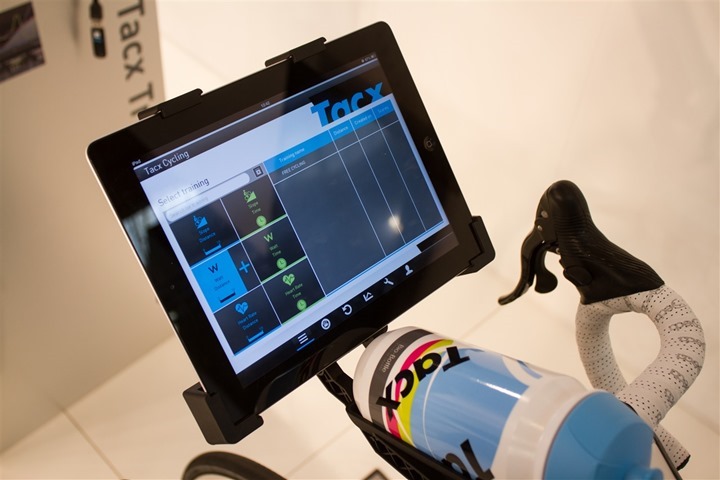 This morning I spent a bit of time going hands-on with the latest product from Tacx – their iPad training app.  In addition, I got details on their upcoming Bluetooth Smart trainers, and their plans to play better and more openly within the existing ANT+ ecosystem.

Let’s dive right into it!

The app features three main modes: created workouts, videos (from outside), and a standard training mode.  All three modes control the resistance on the trainer, as well as display information about your ride on the iPad.

Before we get to more detail on the three modes, you’ll need to setup the iPad to talk to the trainer.  To do so you’ll need an ANT+ adapter for the iPad.  You can use the standard Wahoo Fitness ANT+ adapter, or you can use one that Tacx will sell (it’s the exact same as the Wahoo adapter, just branded Tacx).  In the event you have a newer iPad with the new Lightning port instead of the 30-pin port, you’ll need to pickup Apple’s adapter for it.  The Wahoo ANT+ Key works with the Lightning adapter (though, beware that Wahoo notes that they have seen some problems with non-official knockoff Lightning adapters that are typically cheaper). 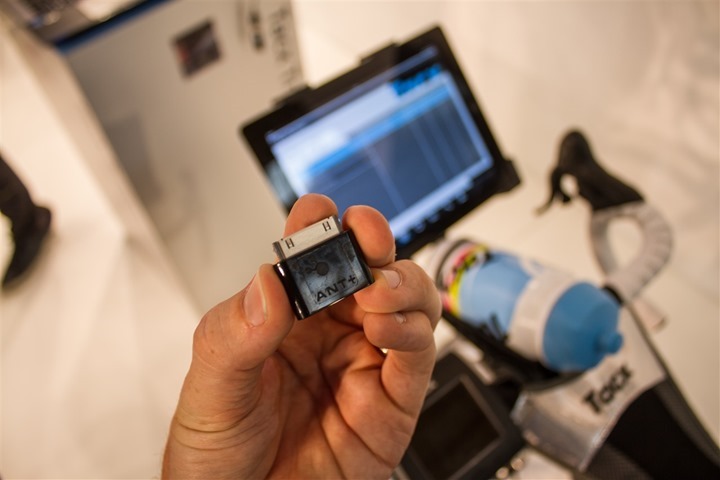 Once that’s done you’ll pair the Tacx app with your trainer.  The unit will support all existing Genius, Bushido, and Vortex trainers.  No special firmware updates to those trainers are needed, they’re good to go today. 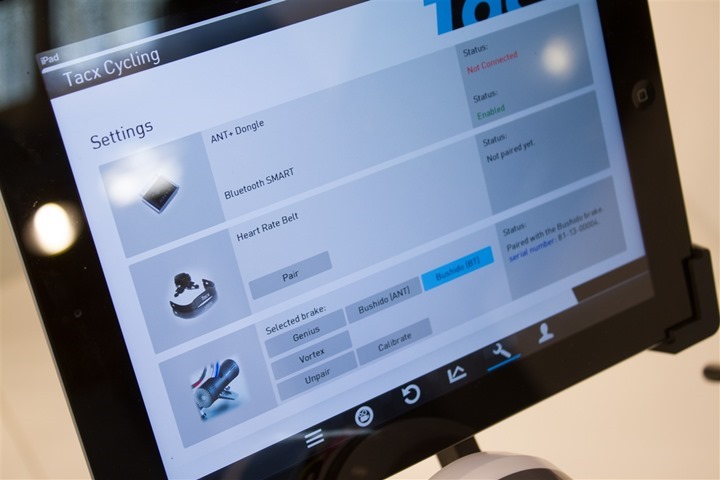 In addition you can also pair ANT+ heart rate straps as well.

You’ll switch between the different modes using the buttons along the bottom of the app.  In the case of below, I’m in the standard training mode (effectively like the ‘Catalyst’ mode on the desktop TTS software).  In this mode I can specify a set distance or time, along with a focus on wattage, slope or heart rate. 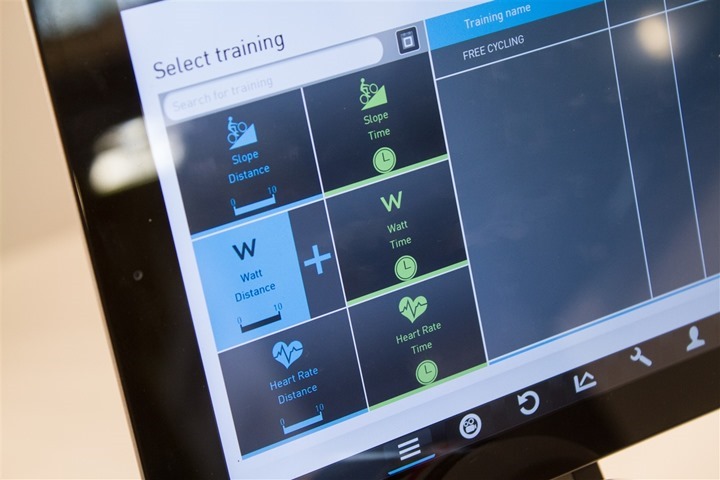 Next we have the workout mode.  In this mode I can define workout targets (in the below case, wattage levels) and the trainer will automatically adjust resistance accordingly during the workout.  You can simply add segments and then using your finger you can increase or decrease the time/duration as well as the target wattage. 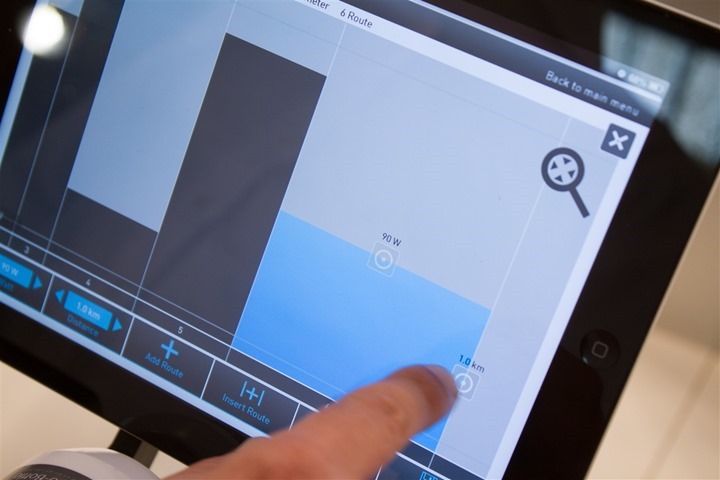 Finally, there is the video mode.  In this mode you’ll download a video from an online Tacx service directly to the iPad.  The videos are from the fairly substantial library of videos that Tacx offers today for sale.  For example, you could ride Alpe d’Huez or other famous routes or races. 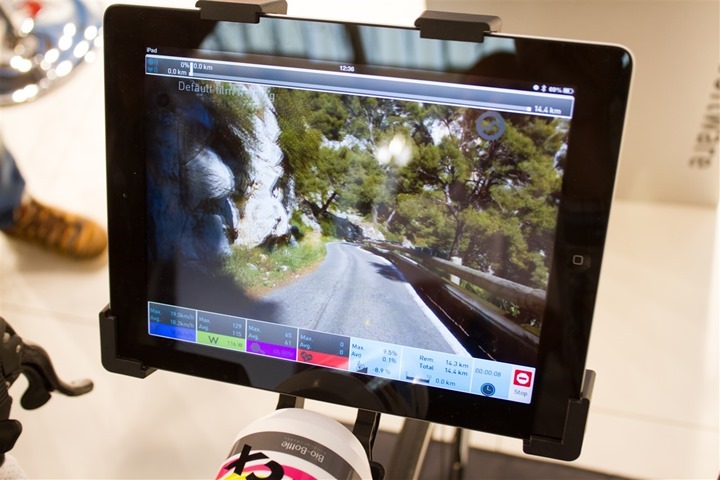 While the video is playing the unit will adjust the the resistance automatically based on the terrain recorded along with the video. 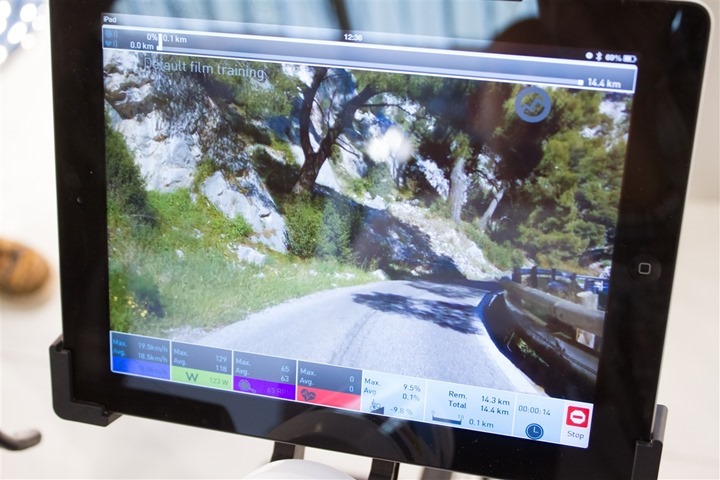 You can swipe left or right to change the view to the upcoming terrain graphs: 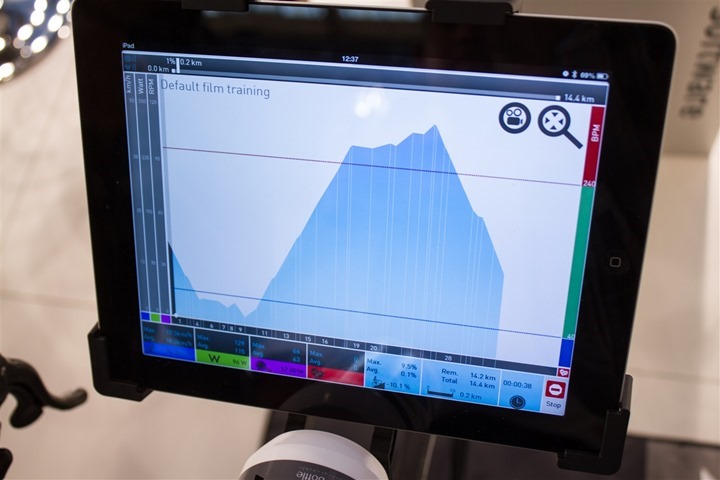 Additionally, you can dig into your current training efforts via the same graph, as seen below. 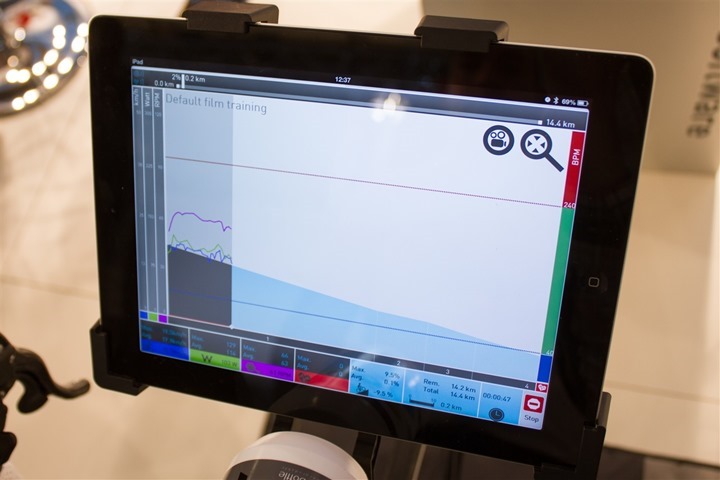 Finally, along the bottom in all training modes you’ll have your current stats displayed.  These include speed, wattage, cadence, and heart rate.  Additionally you’ll see video/workout status such as remaining time left, current time, and current grade. 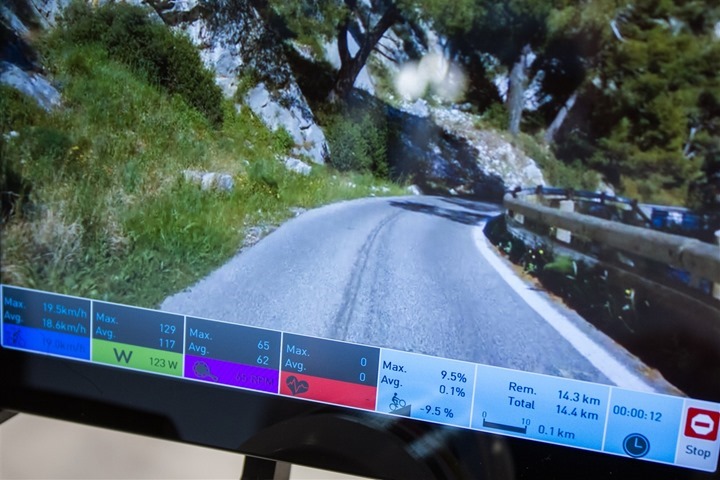 The only shortcoming I’m currently seeing is that they don’t have any ability to export out the workouts from the iPad today (to 3rd party services or files via e-mail). That’s planned for 2014.

In addition to the iPad app (which is compatible with existing trainers), Tacx has announced they will start shipping Bluetooth Smart (BT4.0) enabled trainers later this year.  In fact, the trainer used at Eurobike was Bluetooth Smart enabled (which is why you don’t see the ANT+ adapter on it in the photos above): 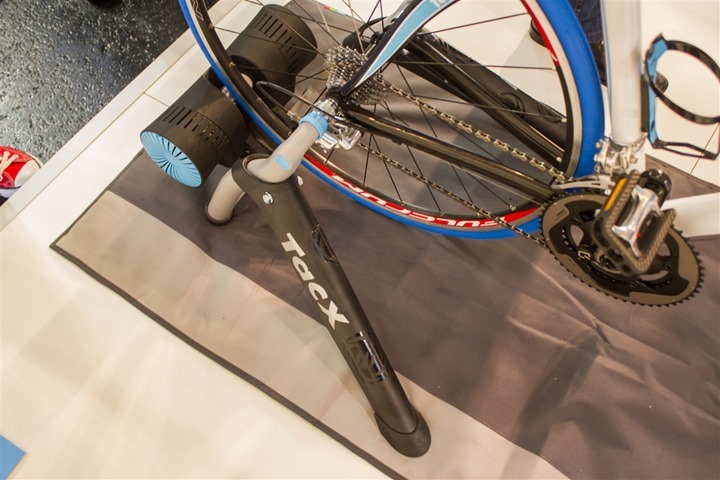 They’ll initially start with the Bushido trainer (that’s the lower-priced one that has no wires), before moving onto other units.  The Bushido Bluetooth Smart package will not include the typical Tacx handlebar unit (shown below to left), but instead require you to have an iPad.  It will however include the iPad mount seen below. 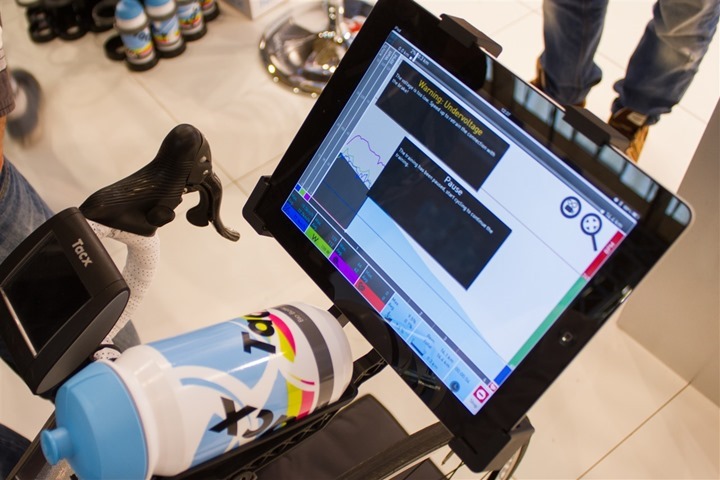 In addition to launching the iPad app, they’ll also be retailing a new iPad mount they’ve designed.  The mount is designed for road bikes. 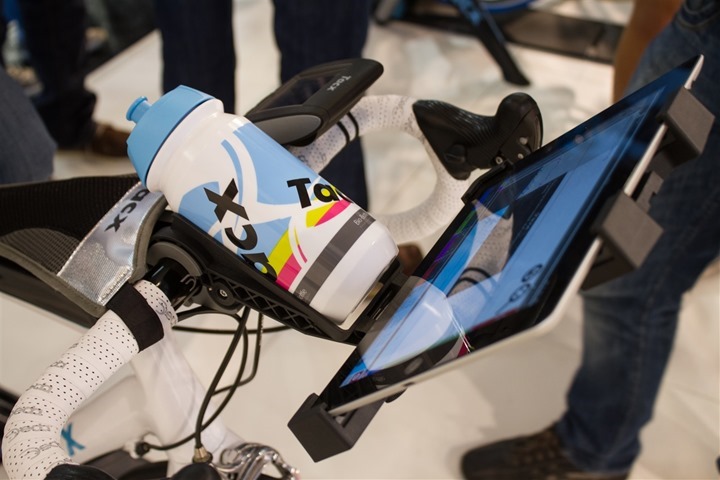 You’ll notice the design accommodates both an iPad, as well as a water bottle. 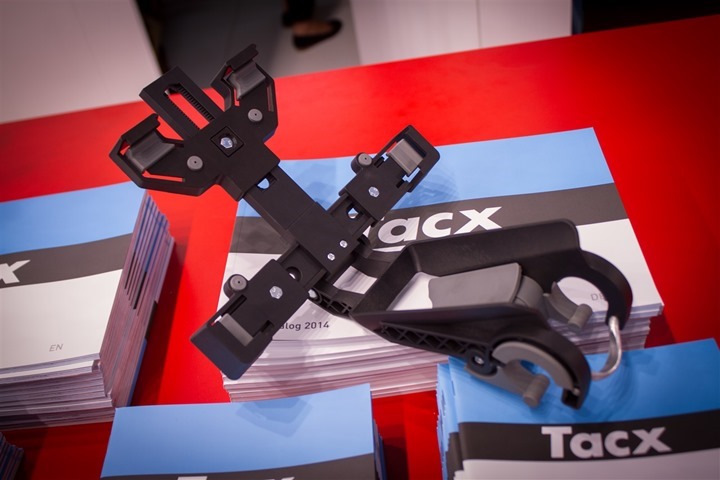 In playing with the mount, the thing is built like a tank (in a good way).  Quite frankly the most stable and secure iPad mount I think I’ve ever seen.  I’m reasonably certain you could launch missiles off this thing if you had too. 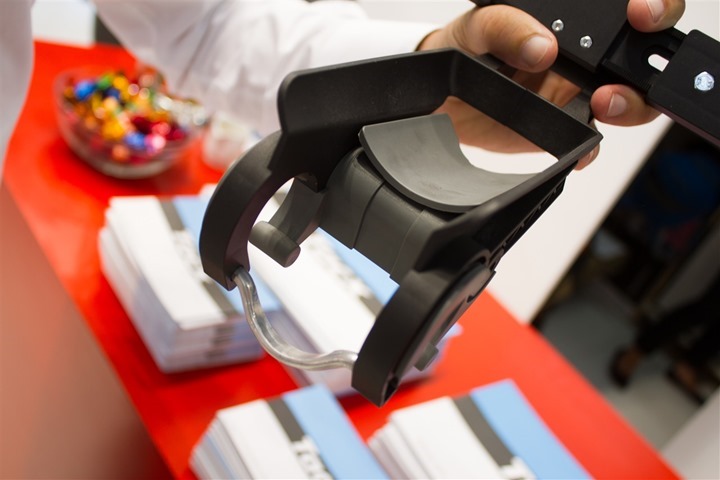 Note the inclusion of a metal bracket on the bottom to ensure it doesn’t flip over.

Random other items of note: 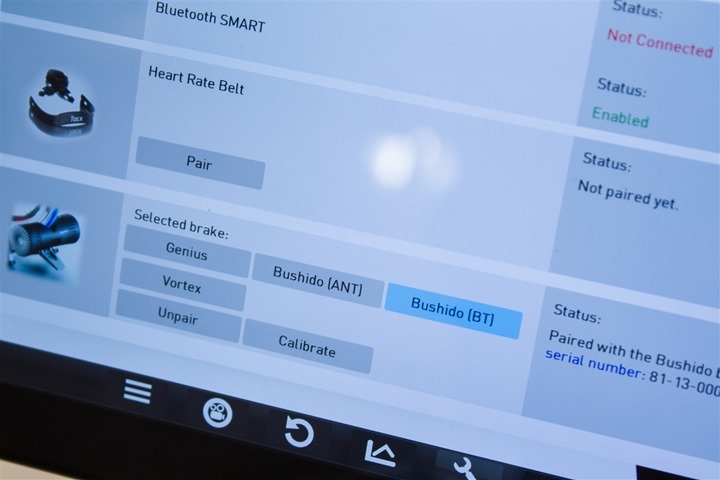 I’ve got two miscellaneous other items to note that will be big deals for those that have been asking for them for years.

First up is that Tacx will be adding the ability to have the existing trainers broadcast out Speed, Cadence and Power via standard open ANT+.  This means you’ll be able to simply use your Garmin or similar ANT+ unit to record the file.  Personally I’m excited about this because it makes my life a bunch easier when doing power meter comparison tests.  They plan to do this in the coming months.  It sounds sooner rather than later, and definitely before Christmas.  This will be rolled out in conjunction with an upcoming TTS (desktop) update.

Once that’s out, they’ll be adopting the ANT+ Trainer Resistance Control profile that the rest of the industry will be adopting.  This means that down the road (likely not in time for this winter), you’ll be able to mix and match software.  So if you want to use TrainerRoad for example to control the Tacx units, you’d be able to do that.  Same goes for the CycleOps software.

The very clear trend amongst all the trainer companies is moving to the standard Bluetooth Smart and ANT+ trainer control profiles, which means that likely by next spring you’ll be able to mix and match any trainer with any software app.

It should be noted however that the profile that Tacx is going out of the gate with on the Bluetooth Smart side is not the same profile that’s used today with the Wahoo KICKR, meaning that Wahoo KICKR apps unfortunately won’t be compatible with the Bushido. 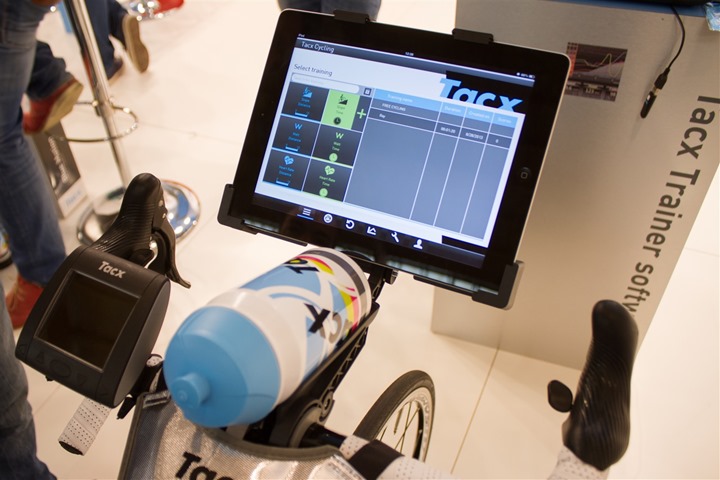 The best part of the Tacx app is probably the price: Free.

Yup, they’ll be publishing the app for free, and you’ll be able to use the standard workout and training features without any additional cost.

The component that will cost money is the individual videos, which are planned to be offered for ~$9US per video, with each video lasting about 30K (20 miles).  Once you’ve paid for the video you ‘own it’ from the standpoint of allowing you to play it over and over forever.  Though again, you don’t have to use the video functionality to use the app.

The iPad app should be available on the Apple store within the next 2-3 weeks.  The Android variant of the same app is scheduled for 2014, along with a slimmed down version for the iPhone, allowing those just looking to control/record the workout without a full experience.

Finally, the iPad mount (officially called the ‘brace’) will be available for 35€. It wasn’t immediately clear what the USD price would be, but within that ballpark (that’s roughly $40US).  Additionally, they will sell a branded version of the Wahoo ANT+ adapter, but the pricing version wasn’t on hand.

As always, thanks for reading!  If you’ve got any questions, feel free to drop them below and I’ll do my best to get them answered.