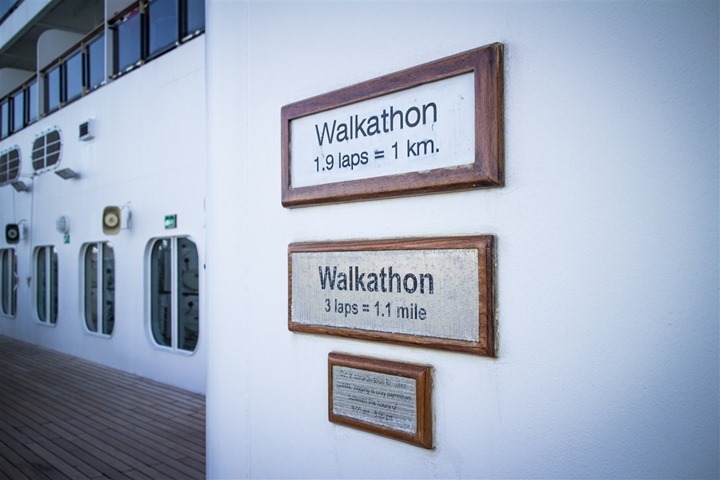 The past few days we’ve been floating along on a rather large boat. Technically more of an ocean liner, but still, it did float. The Queen Mary 2. Yes, a long lost but still rather close relative of the Titanic. Thankfully, this post is proof that we didn’t have any Titanic-like moments.

The run on the table for this evening was a 15-minute warm-up & build, followed by some intervals, before a cool-down. I decided that the best course of action would be to do the 15-minute warm-up and build outside, then going inside to the treadmills for the intervals. The reason being I wasn’t sure how difficult it would be to run the outside loops from a people-in-the-way standpoint. Running on cruise ships in the past I’ve learned it can be a mixed bag. Sometimes you luck out, and sometimes you’ve got people wandering around eating hot dogs and double-fisting alcoholic drinks the size of baseball bats.

Of course, first up you need to make it past the doors leading out to the deck. 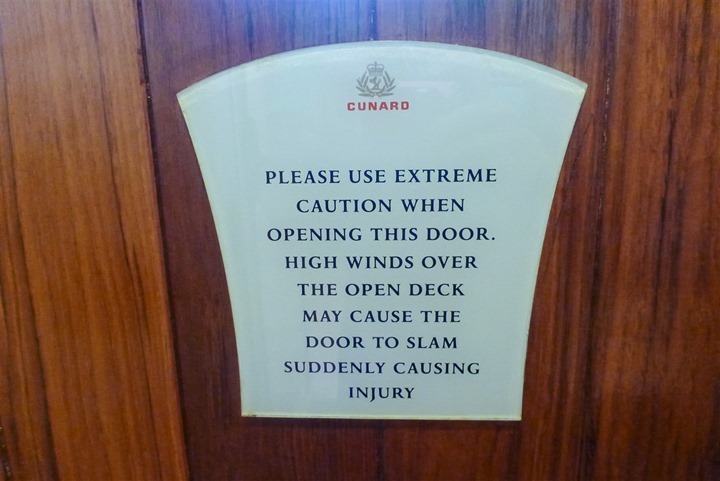 I started my run just about 7PM. We’ve learned it’s best to go either early or late. Given the demographic on the Queen Mary 2 is typically of older vintage, we figured going at 7PM would put it at most others people’s dinner time. 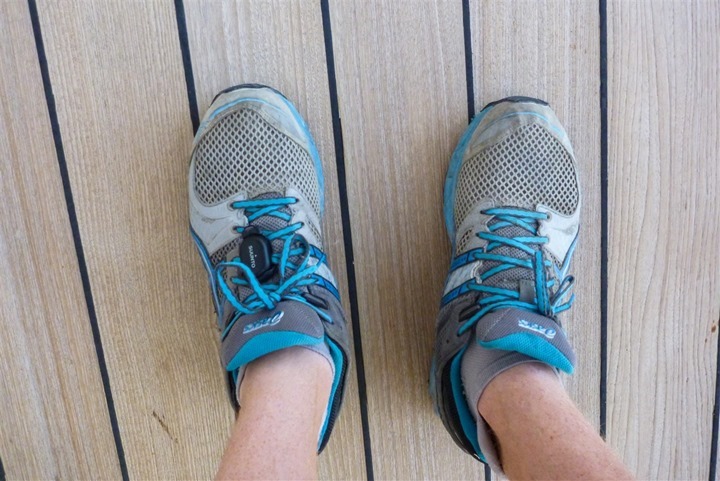 And we definitely guessed correctly. When I stepped out, there wasn’t much of anyone out there: 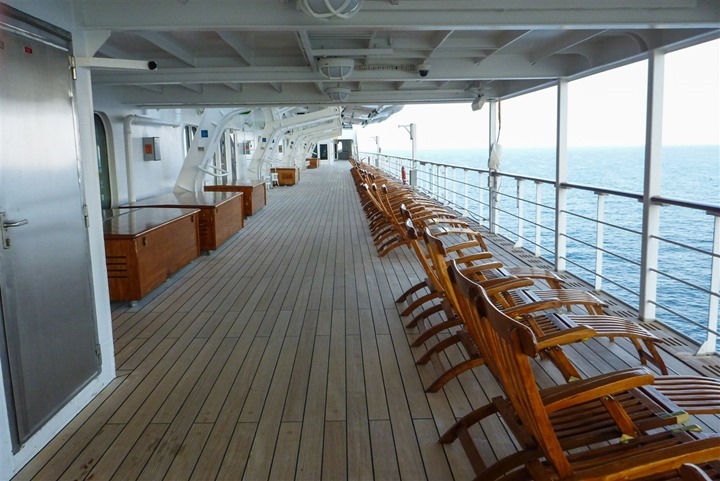 I set my watch to utilize the footpod for pace. This means the watch will show me my pace using the footpod as opposed to GPS. With GPS, the pace would show essentially the ships speed. 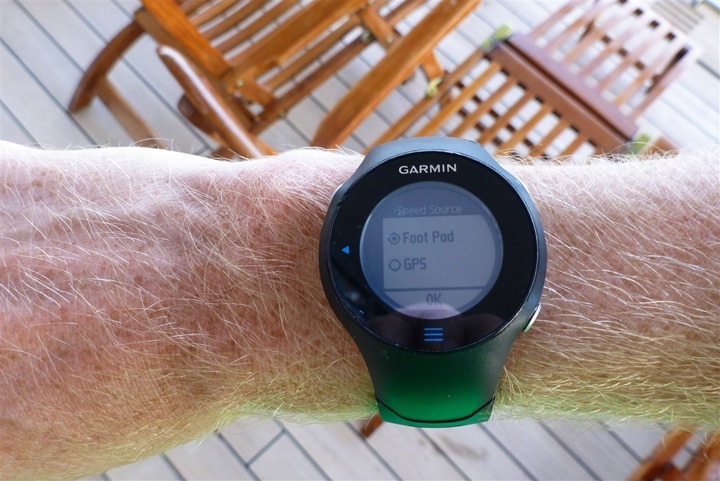 Then, off I went!

Each loop is slightly more than 1/3rd of a mile, which is actually quite big when you think about it – it’s larger than a standard track. 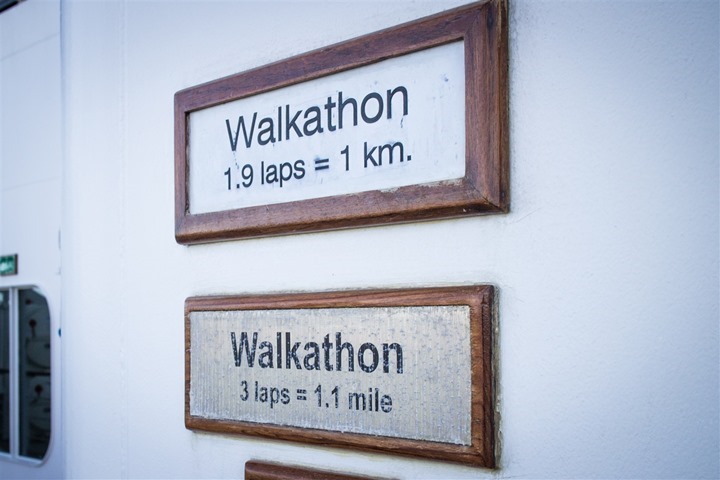 They limit your running or “power walking” (yes, it’s in the binder in our room) to 8AM till 8PM. This is because there are actually rooms below you. 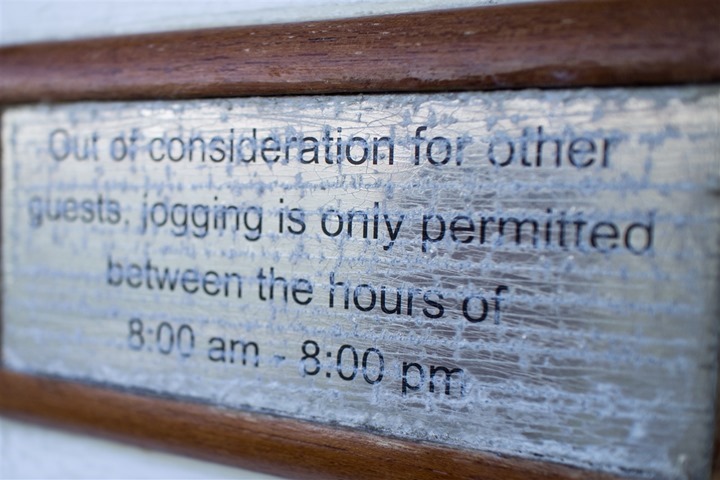 As I began my first loop I passed the first of two turns – one at the bow (front), and one at the stern (back). 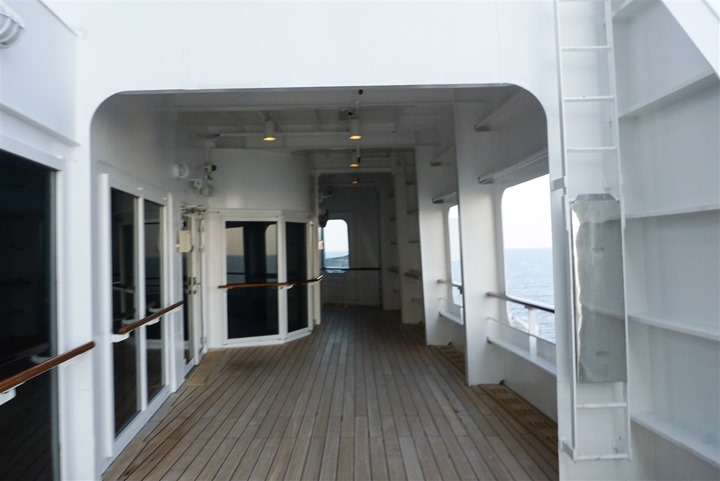 I’d pass through a tunnel crossing the entire width of the ship, just in front of the gym actually. 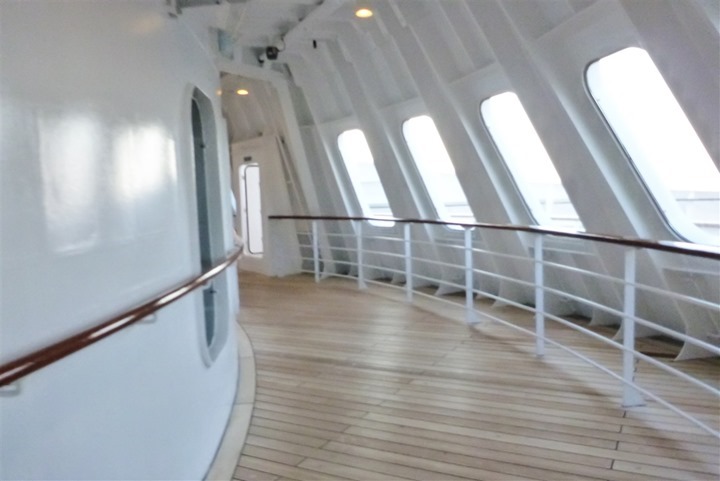 Then I’d round towards the edge, coming into the setting sunlight: 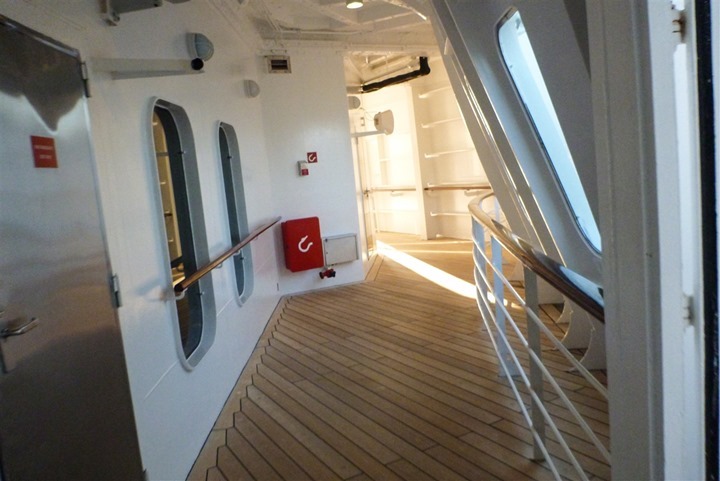 Once on this side I’d be running towards the back – so not only did I have the sun, I also had a bit of a tailwind. It was great! 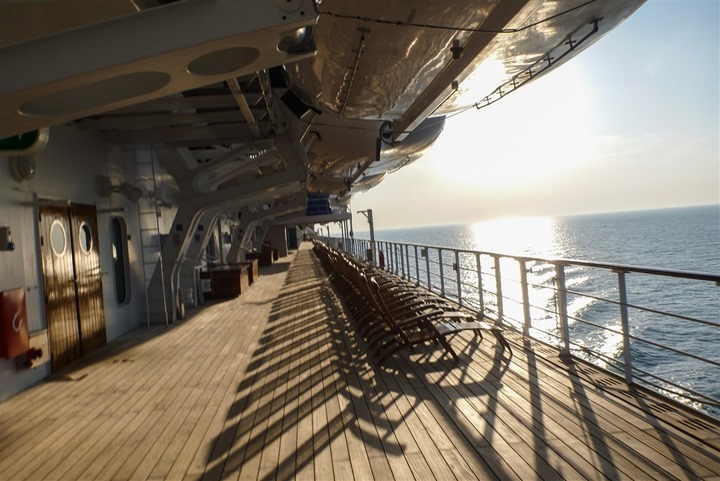 Looking at the railings, there were plenty of little life rings around. I assure you, if you fell over, those life rings would be useless by time they stopped the ship. 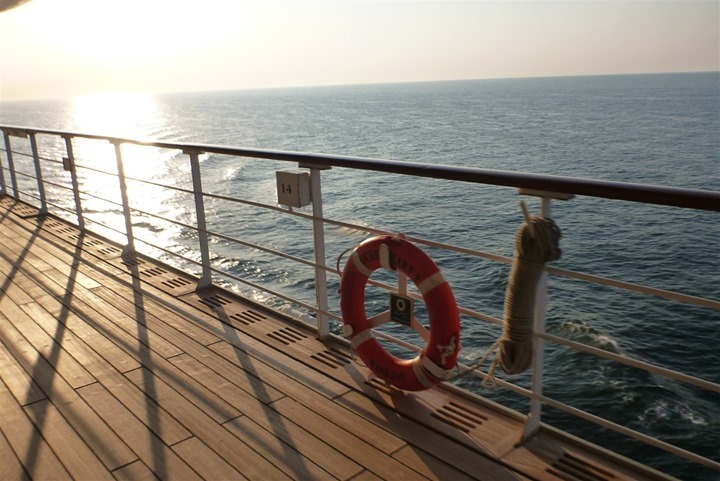 On the other hand, the little boats above you served as a constant reminder of a situation you’d like to avoid: 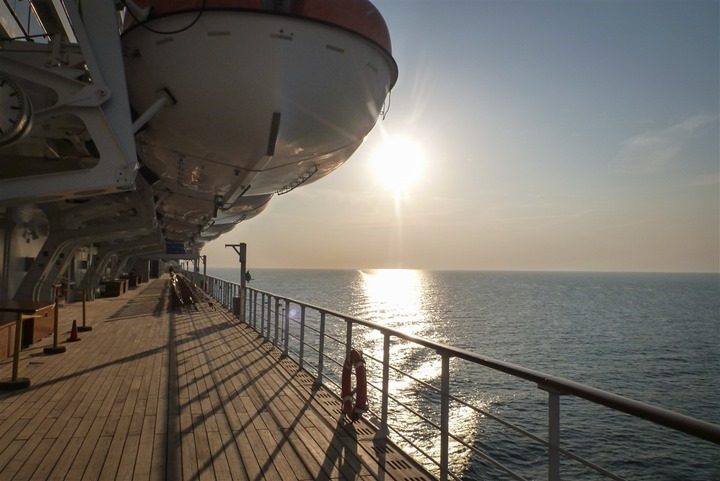 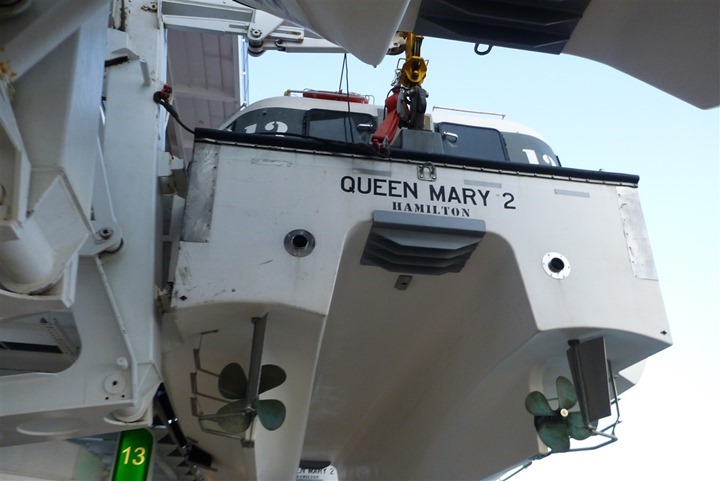 Here’s the view from above of those boats: 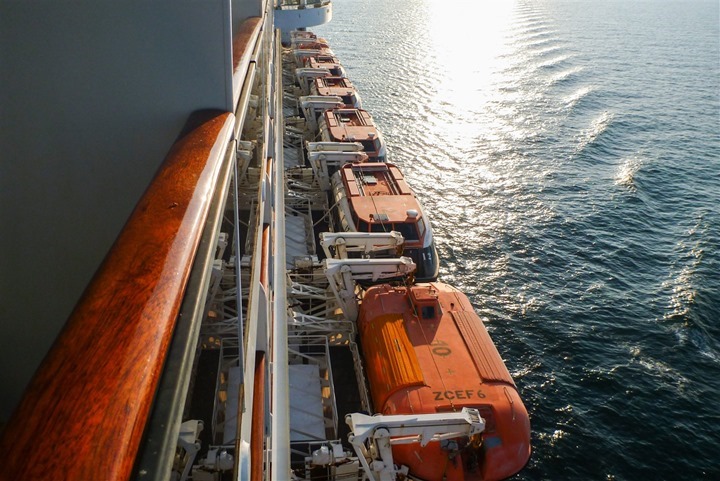 I’d then approach the rear of the ship. This was the only part of my route where a few people hung out. It backed up against some restaurants. You can see the typical attire worn on the ship: 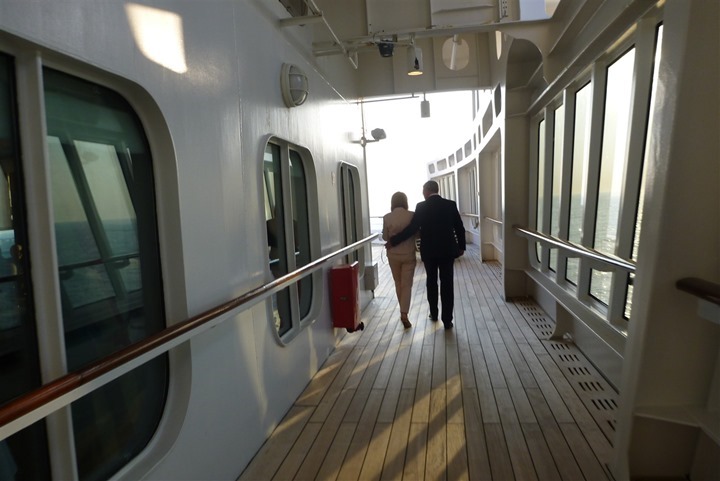 And here we go, looking out to sea behind the ship as I made my way across it: 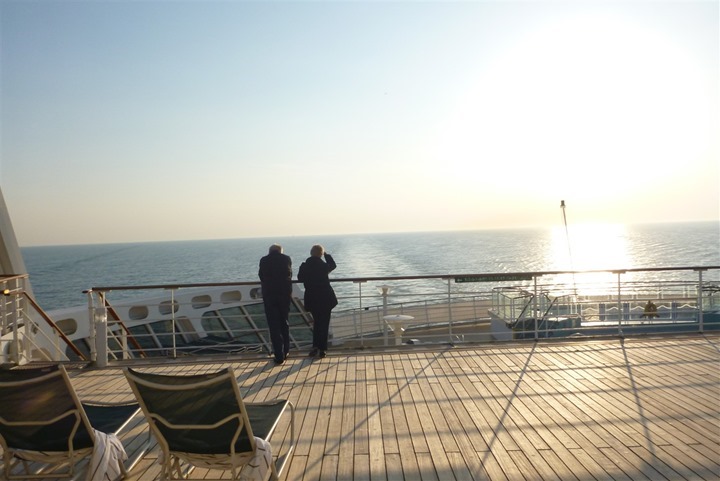 Then it was back into the shade again. 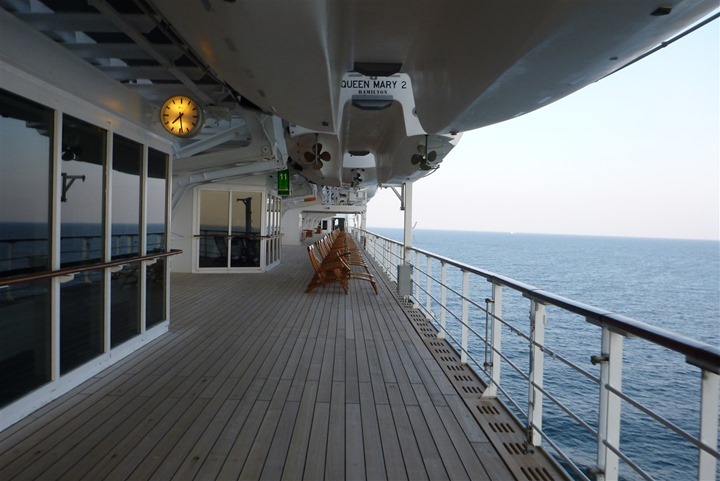 In this area towards the back of the ship you’d actually run past some dinner tables. I was kind looking in scoping out what I’d soon be eating. 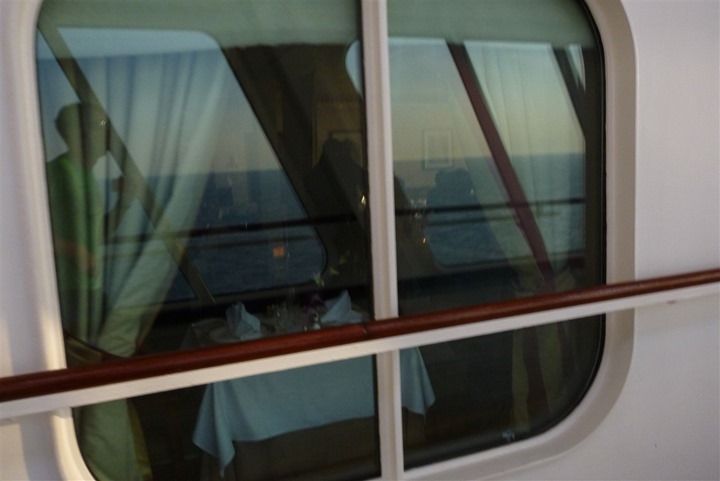 As I got closer to the front a few laps later I’d finally see the only other set of runners I’d ever see out there. 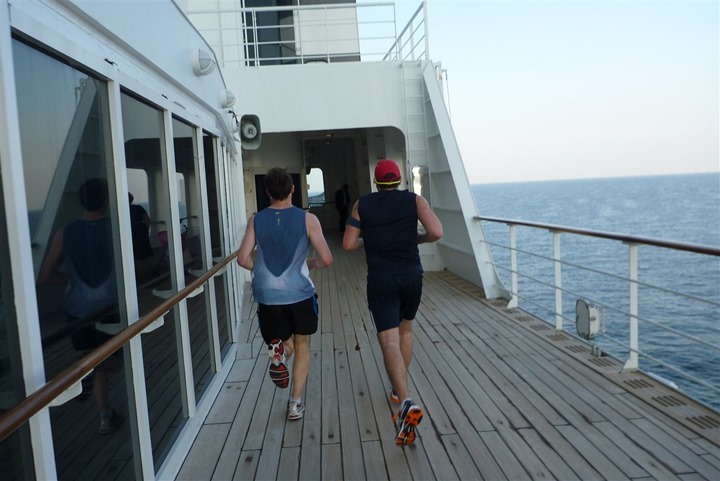 Yes, of course I passed them. Obviously.

Speaking of speeds, it should be noted that while the FR610 was using the footpod for display pace, I had left the GPS on – mostly just to be able to explain a key point. The FR610 will still use the GPS for distance, even though pace is being shown from the footpod. Additionally, it’ll actually record via the GPS pace as well.

Outside, I’d make one more loop into the sun grabbing a selfie before heading in: 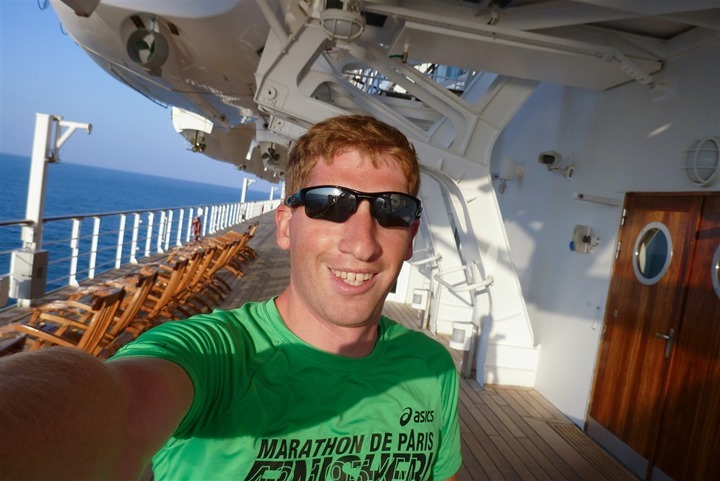 Then it was back up to the front, where just under the bridge I’d head in the doors towards the gym: 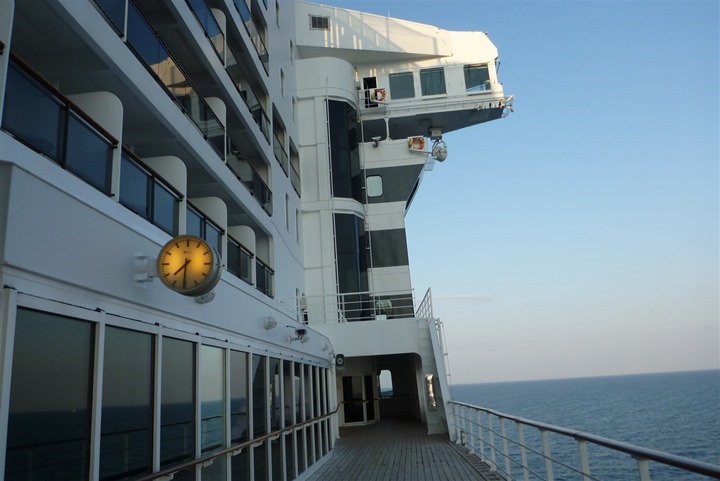 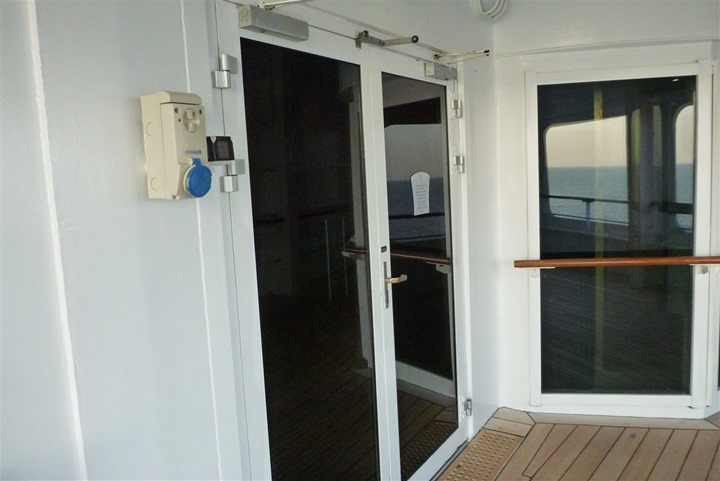 I’d say that the gym appeared to be the least-used part of the ship. While I took the below two photos earlier in the day, it wasn’t any busier when we were there. Just one other person. 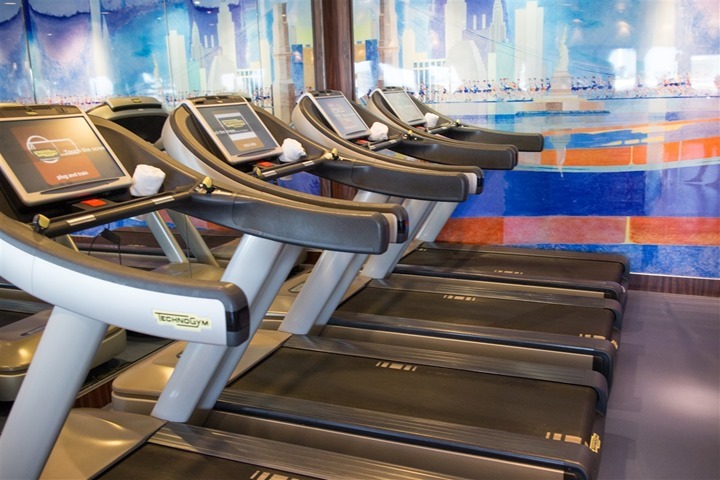 I did like the painting behind the treadmills. It shows a long line of runners running from London to New York City. Given the Queen Mary 2 is designed to simply go back and forth between the UK and NYC, this was a nice touch. 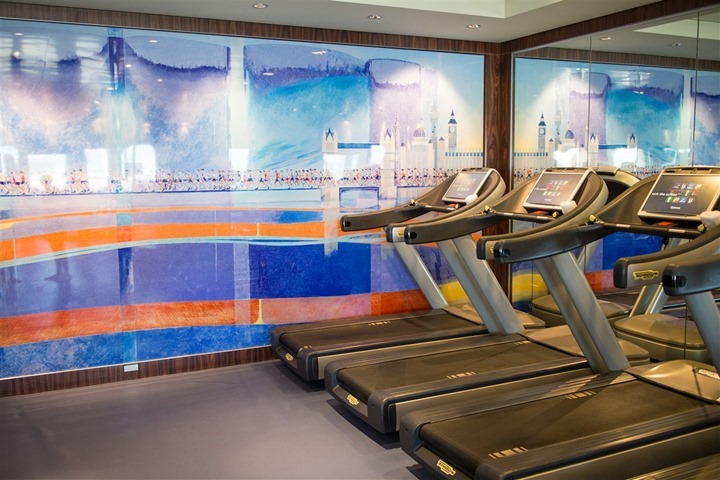 On the treadmill, I knocked out my intervals pretty quickly. I had actually started a new workout for these, and this time left the GPS off and just did them as I normally would on a treadmill.

Perhaps the coolest part of the treadmill with this little speed handle. I’ve run on a LOT of treadmills, and I’ve never seen this before. 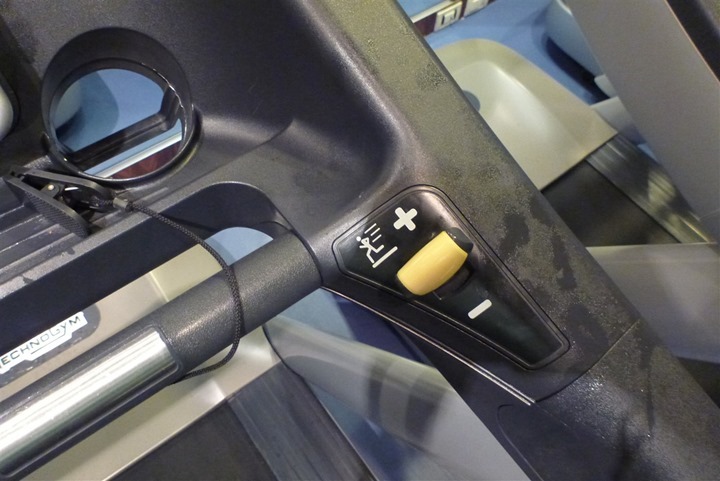 At 8PM as I was finishing up my workout we were kicked out. Apparently the gym closes then. Yikes. 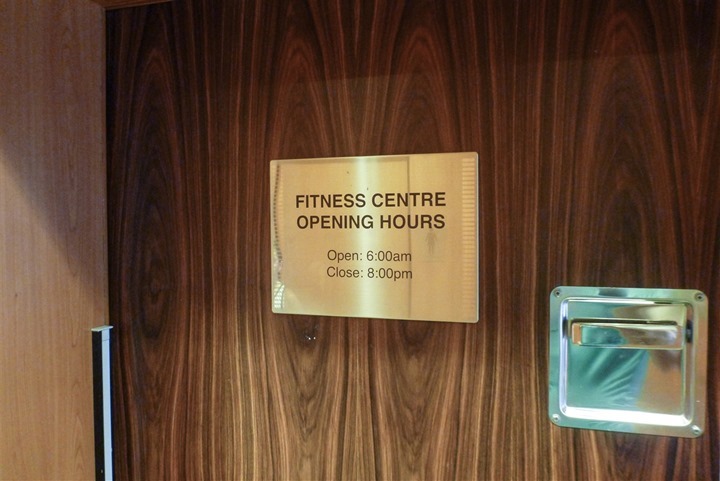 So, we went outside and enjoyed a cool-down walking lap on the deck at sunset. 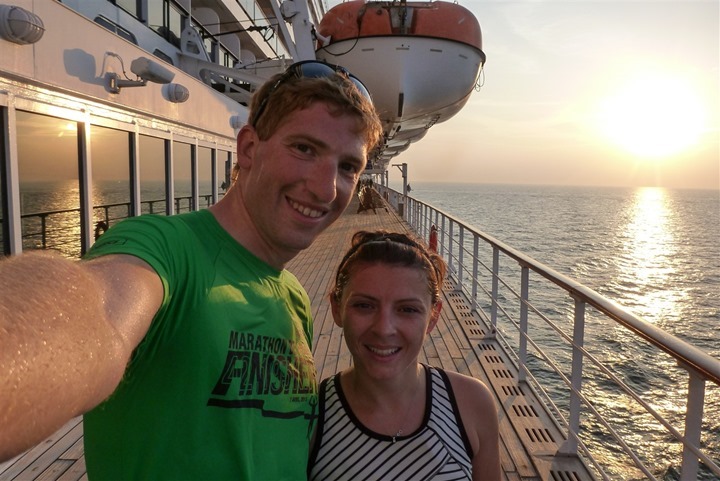 With that, runaround complete – and feasting begins! Well, that was the theory anyway. More later…