Ever since booking our honeymoon months ago I was curious exactly what the GPS map would look like while running outside on the circular running track while the ship was underway at sea.  Would you be able to see the circular pattern at all once you mapped it onto a satellite view?  And what exactly would the distances and speeds look like?

Well, I set out to find out.

During our 10-day cruise I ran a handful of times on the ship while a sea.  In most cases I simply ran indoors on the treadmill because the pool deck was crazy crowded with civilians that were busy munching down hot dogs while aimlessly wandering around and moving beach chairs onto the running track.  Thus, running during normal hours wasn’t really an option.

But running indoors wasn’t entirely without entertainment.  See, once the boat starts to rockin a bit the treadmills became quite interesting.  This is because the treadmills faced the ocean and were fairly close to the edge, which meant if you rocked the boat to port/starboard (left/right) it felt like you were instantly going uphill or downhill. 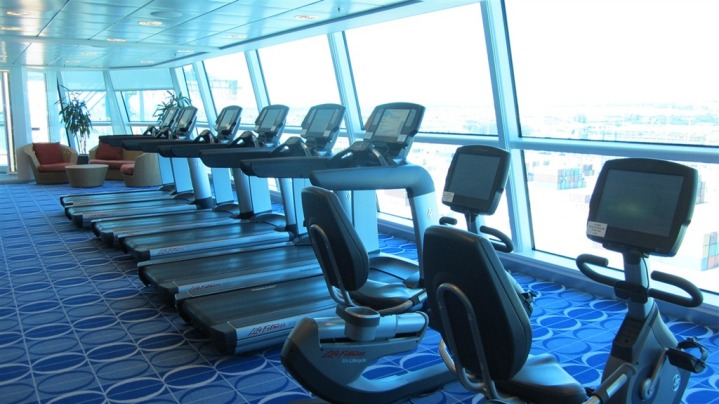 For fun, I’d sometimes leave the GPS portion on while running on the treadmill (or on the stationary bike), just to see later on where we’d gone while I was running or biking:

The cool thing here is that I can actually set it to see the real treadmill running speed vs the GPS boat speed…but I’ll talk about that in a minute.

The cruise ship had a track that looped around one of the upper decks overlooking the pool area and was about a tenth of a mile long.  During the day this was prime sunbathing grounds, but in the very early mornings it would be clear.  Additionally, if you managed to hit the timing just right it was empty in the evenings in between the sun starting to set and the first dinner seating, but before the evening outdoor dance/party activities would kick up. Here’s the track: 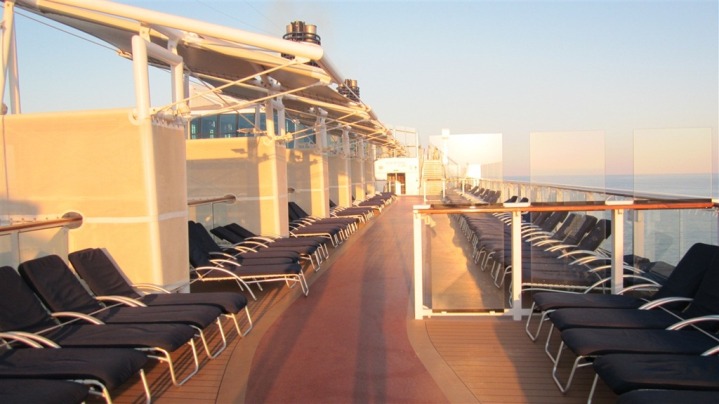 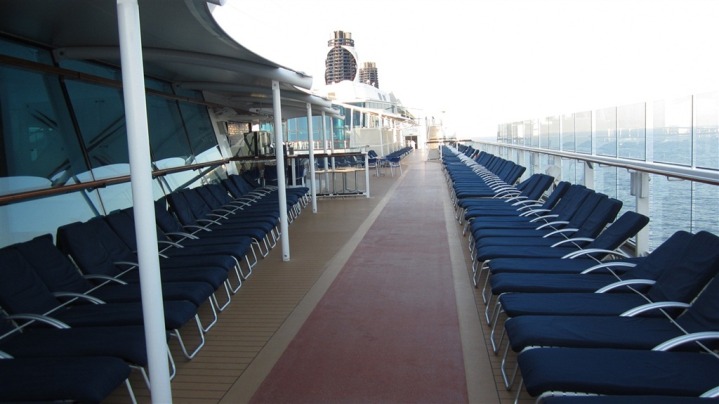 First, I’ll note our actual speed over the water.  I simply put it in cycling mode for a moment to take this picture – it’s the bottom number, 23.5MPH: 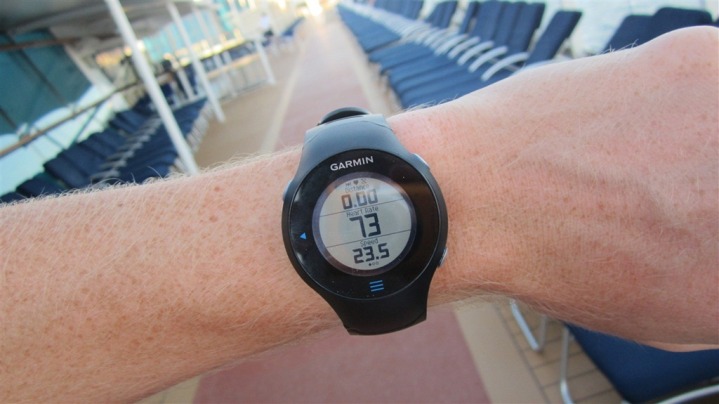 Next I switched over the FR610 to running mode.  Then I did something important – I switched the Speed Source in the footpod settings to be from the footpod and not from the GPS.  If I had just set it for indoor mode it wouldn’t have recorded the GPS track or my location. 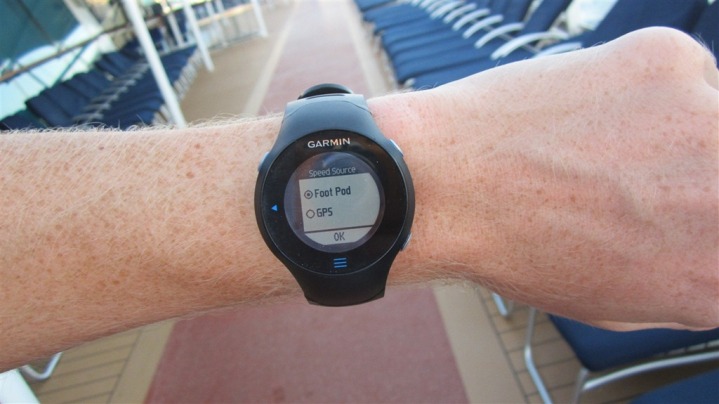 Why’d I do this?  Well now instead of showing me the GPS speed on the watch, it’ll show me the speed that I’m actually running by using the ANT+ footpod I had on my shoe (see this post for everything you ever wanted to know about the footpod).  Now you can see as I’m running along the top data field shows my actual pace over the deck of the boat (6:55/mile), versus my pace over the water (23MPH!). 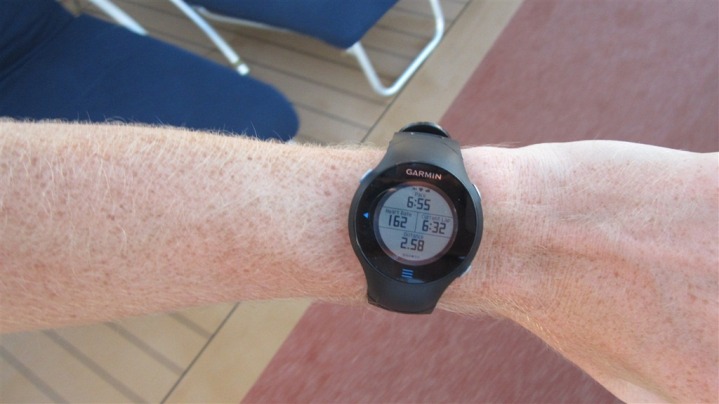 So off we went running.  We tied off our bags to some chairs and went about doing a LOT of laps. 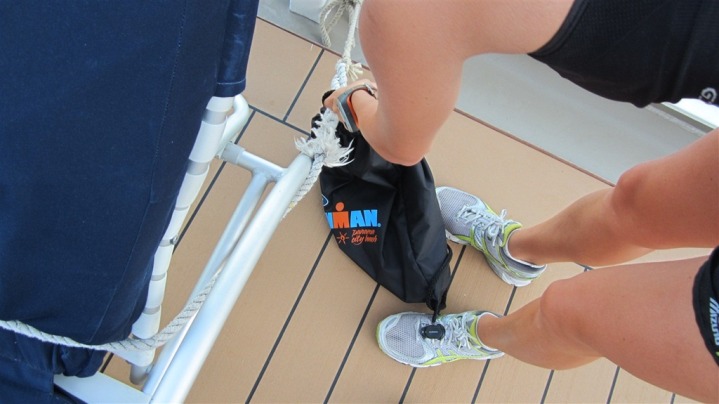 Honestly, I can’t quite remember how many laps, but I suspect it was about 30 laps in total.  I’m not sure I could do many more laps, it was almost getting dizzying how quickly you’d complete each circuit around the pool: 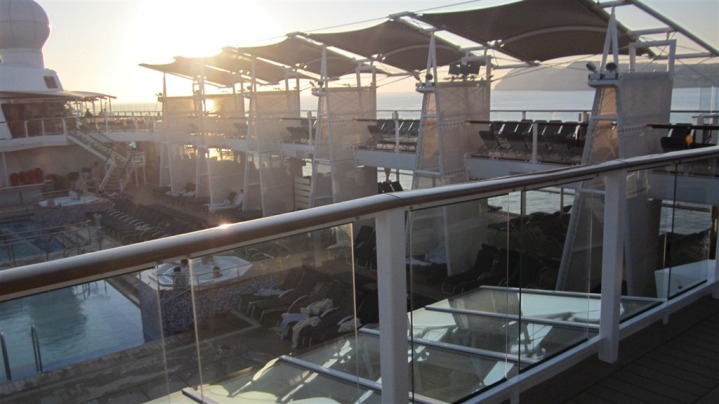 But, it did provide for some fantastic views as we got to watch sunset from from virtually every angle: 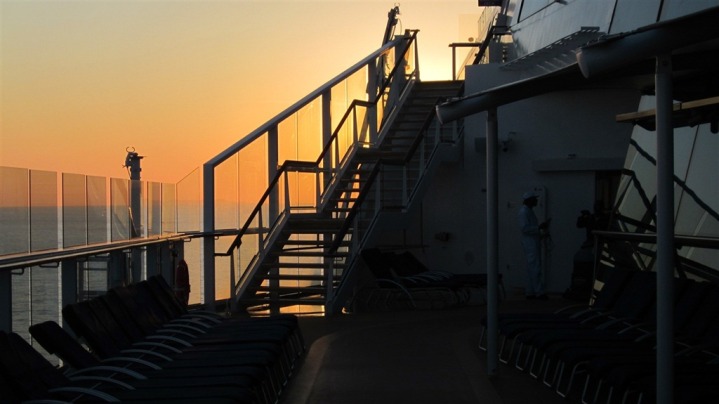 Of course, there’s still the outstanding question: How’d the GPS piece look?  Well first let’s check it out from on high: 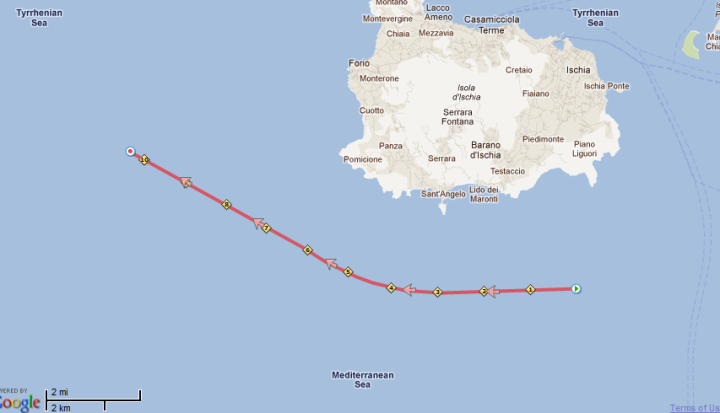 From that high up it doesn’t look too much different. For the most part it just looks like I ran 10 miles in a straight line on the ocean.  But let’s go ahead and zoom in a bit…or rather, a lot:

From here you can just barely start to see the weeble-wobble back and forth in the GPS track as I crossed each side of the pool deck.  But let’s zoom in a tiny bit more: 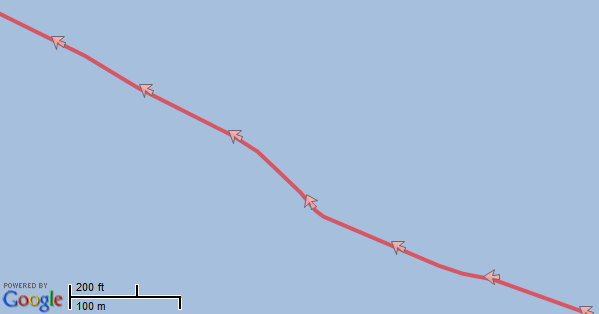 Yup, you can now very clearly see when I ran across the deck to the other side. And it roughly matches the scale compared to the width of the boat.

While this would be much cooler if you could actually see the boat overlaid in the picture – you’ll just have to imagine it for now.  I’m sure someday satellite technology will be able to show it all in real time playing back images from whenever you’d like.  Regrettably, today is not that day on Google Maps.

What’s that I hear?  You want me to draw it in instead?  You mean you want a comeback of some of my past MSPAINT skillz (click the link and scroll a bunch if you weren’t here two years ago)?

Ask, and you shall receive! 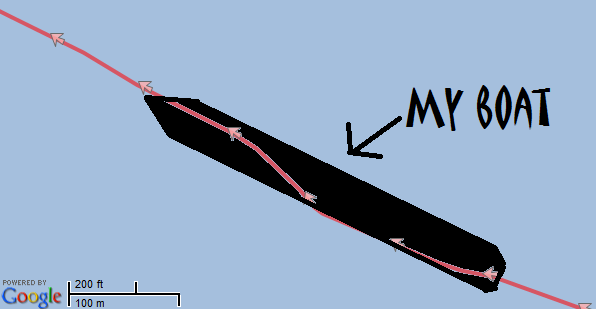 But you know what the best part is though?  While the speed/pace shown on the screen uses the footpod, the distance displayed actually uses the GPS.  Thus the following: 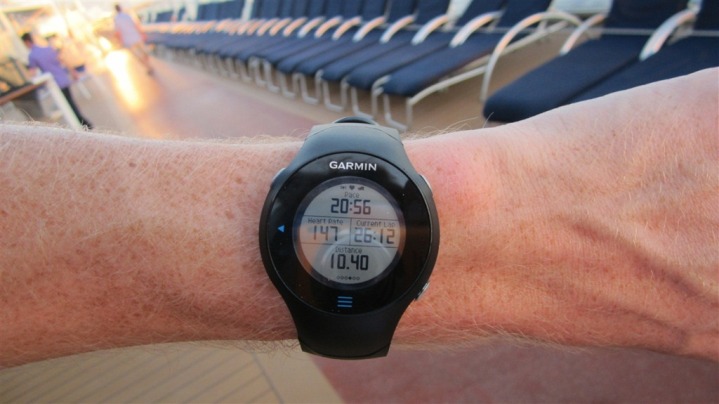 Yup, the way I see it I just set a new 10-mile PR at 26 minutes and 12 seconds. I think they should just give me the Olympic Gold Medal now, no need to wait another year till London 2012.