Getting our Christmas tree home by bicycle: 2012 Edition

Like the US, Christmas trees are readily available in France.  Be it at just about every corner convenience store or small grocery, or even at gas stations.  Here the trees are a wee bit shorter in general, and a little bit less bushy than most trees found in the US.

We’d been looking at trees since late-November when they first started appearing on street corners.  But it wasn’t until this last week that we had a chance to go get one.  While we had initially planned on going to the grocery store to get one, we ended up actually going to a large greenhouse area not too far away.  Perhaps a 10-15 minute walk. 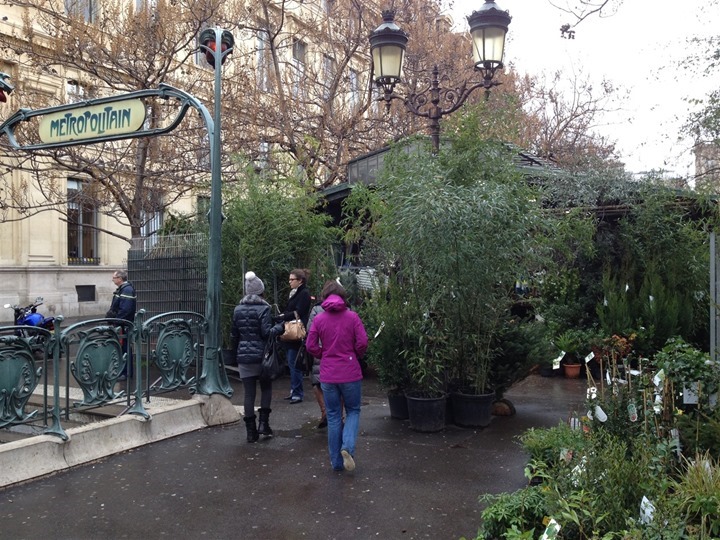 We walked through the various greenhouses, trying to decide which tree would be best for us.  We didn’t want something too big, since our apartment is a bit small.  Further, we had to get the thing home, as well as get it up a small elevator. 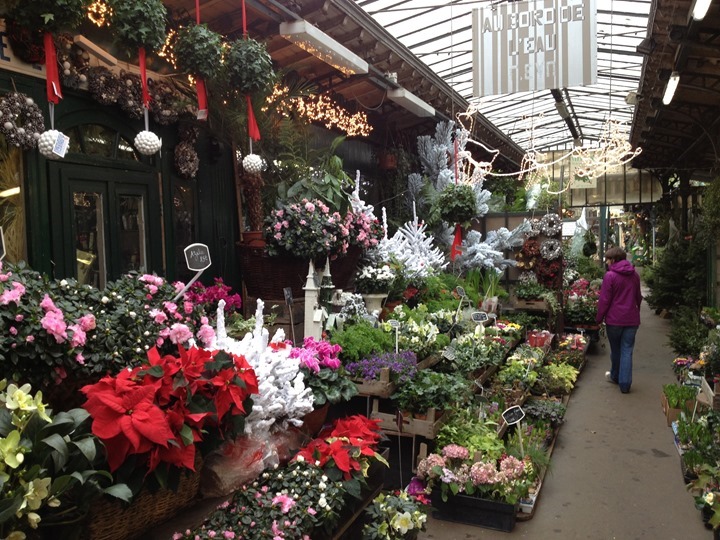 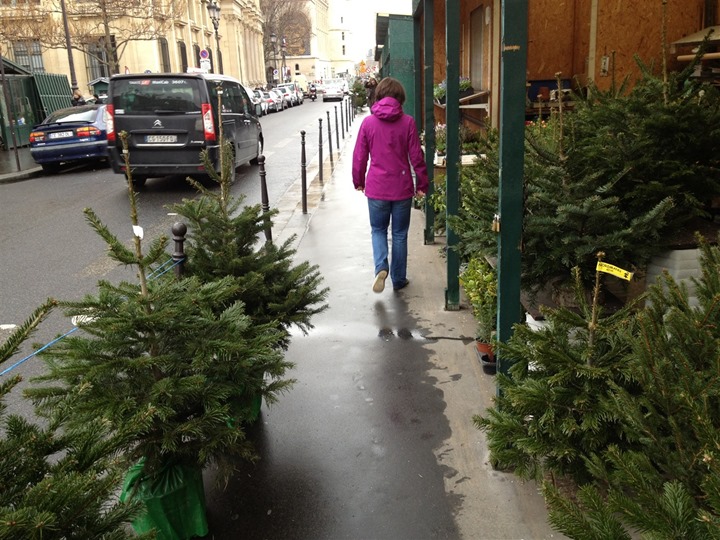 It was interesting that some of the trees were root-bound.  I guess you just stick it in a pot instead.  Of course, then afterwards you can plan it somewhere.  In our case, we don’t really have any yard, and I’m not sure Notre Dame would be terribly happy if we planted a tree on their grounds (though, since they apparently forgot to put-up a Christmas tree this year, perhaps they’d appreciate our gesture). 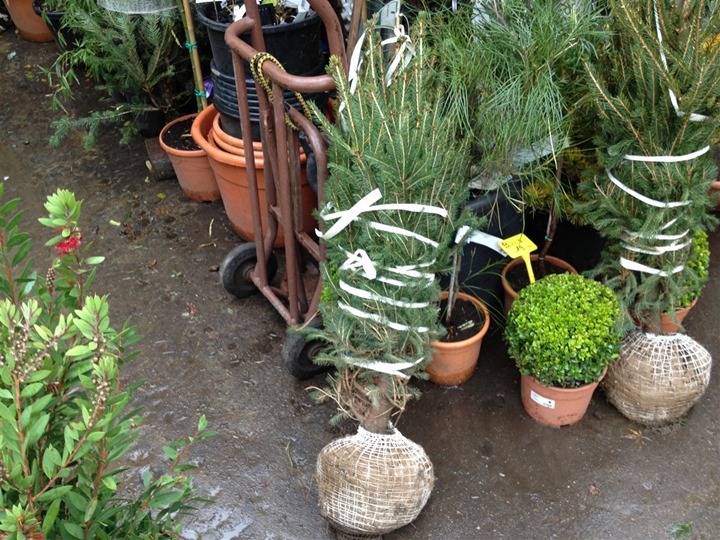 Most trees we’ve seen in Paris are actually stuffed into a log.  The log acts as the stand, though there isn’t any way to water the tree like you would in the US into a basin of some sort. 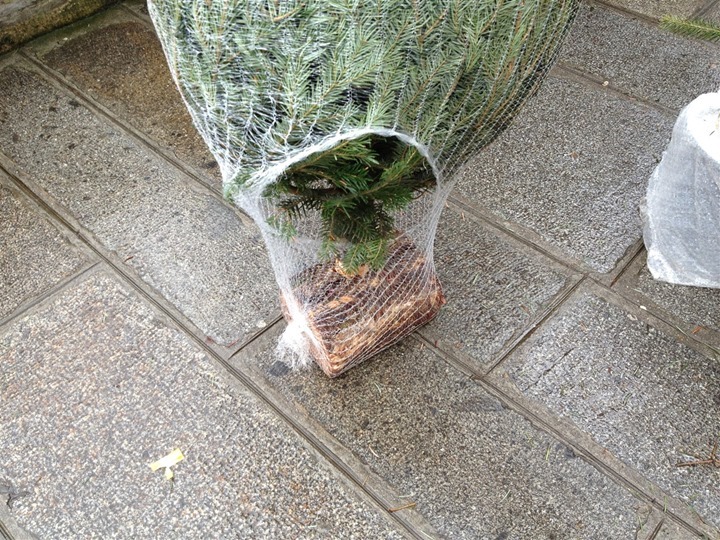 We then slowly narrowed it down to a few trees before picking the winner. 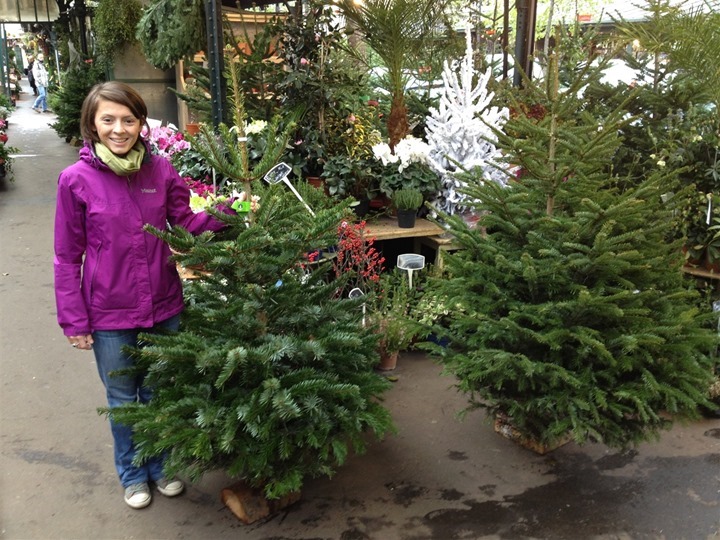 After we picked out our little tree, we had the owner for this section of greenhouse help us out.

At this juncture, he…uhh…well…mounted our tree. 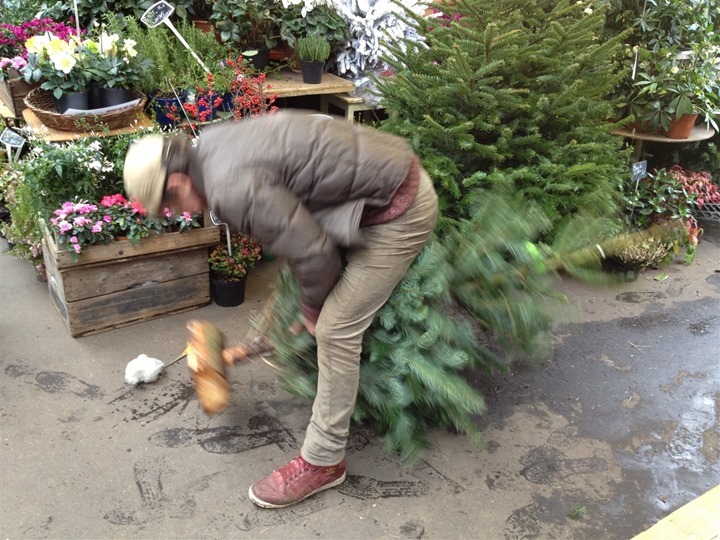 And then bound it up. 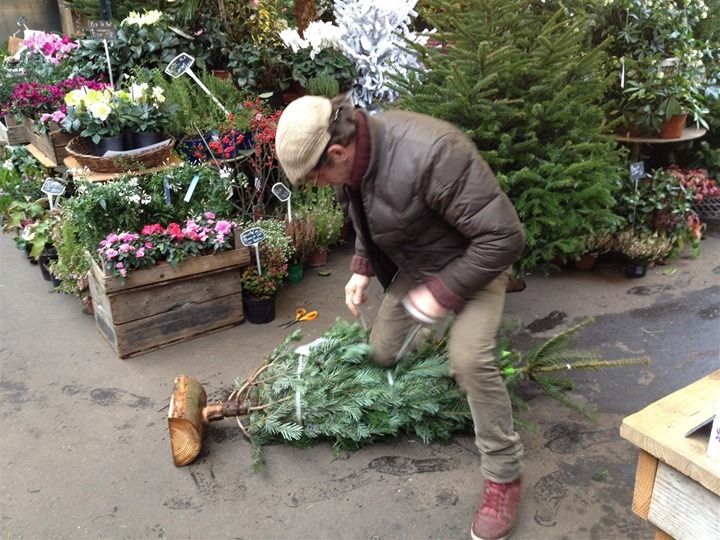 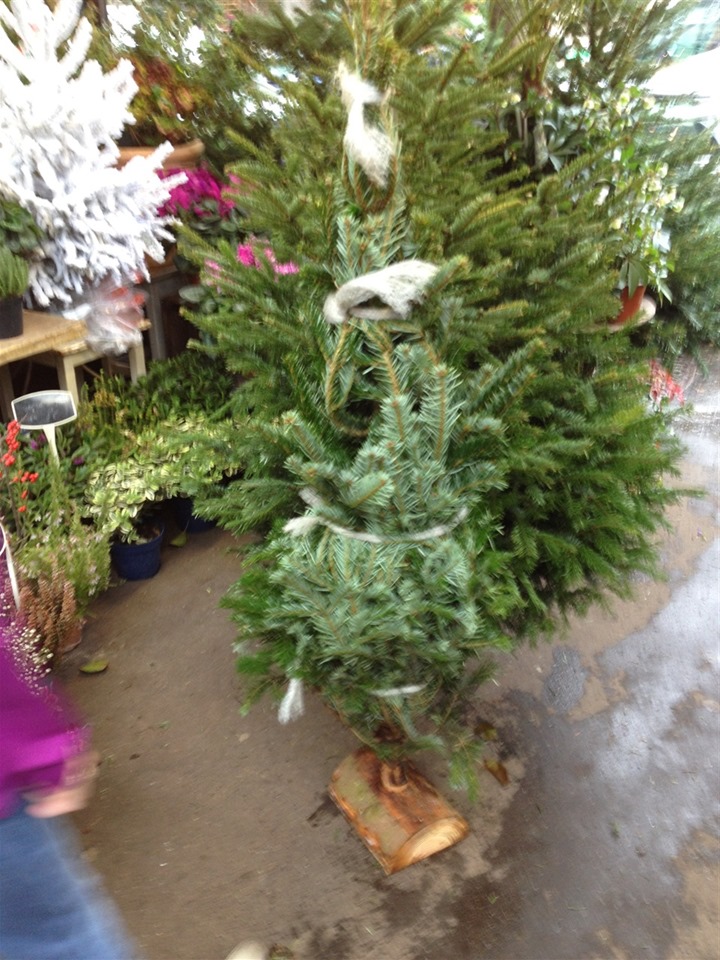 From there, I threw it over my shoulder and we went for a short walk about 50 yards away to a rack of Velib bikes: 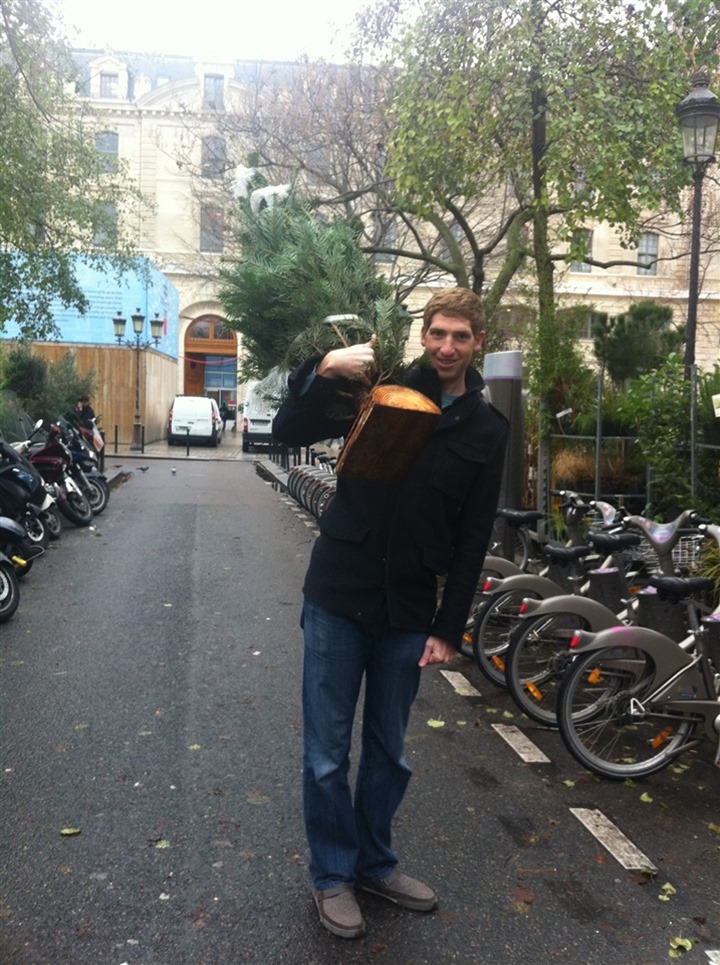 For us, this meant a bicycle.  If we had tried to get a taxi, it would have probably taken longer due to the complexity of one-way streets (for cars) getting between the greenhouse and our house.  Plus, it wouldn’t be as much fun.

We then plunked the tree in the front bike basket and used the included bike lock cable to hold it down.  It fit surprisingly well, and was far more stable than I expected.  I could have easily done a sprint-triathlon with it in there and not been too worried. 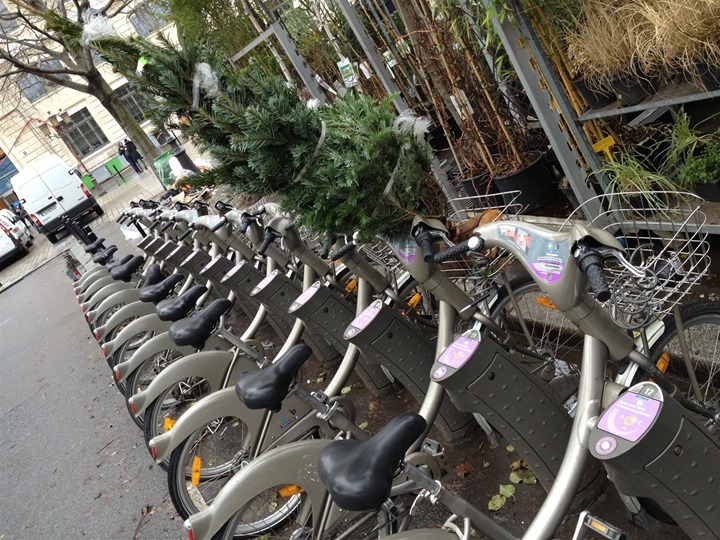 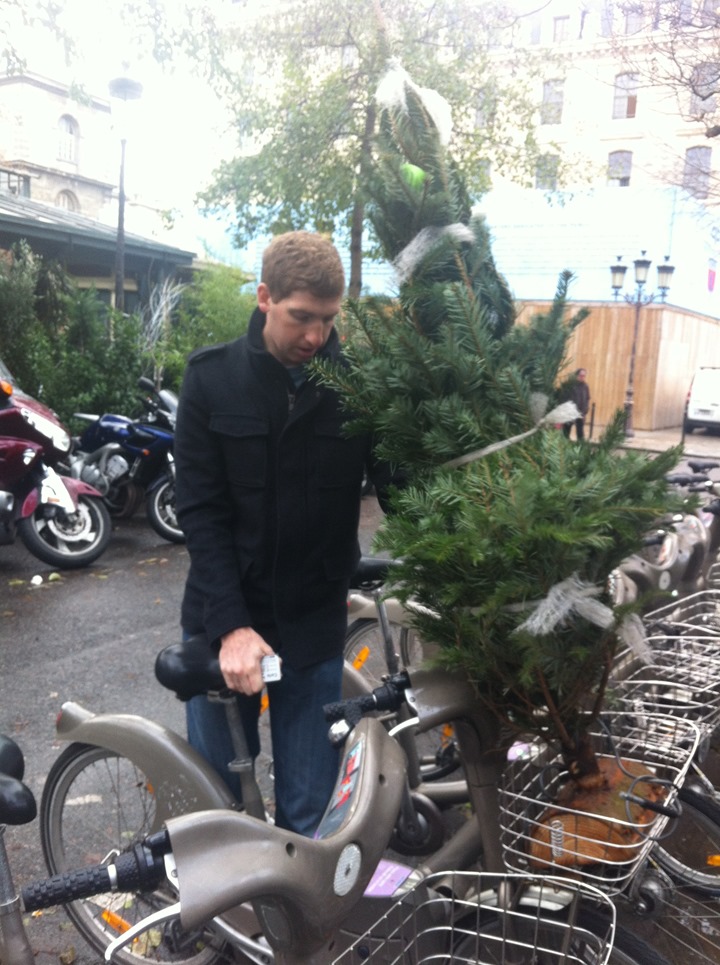 From there it was a quick 5 minute bike ride home..no worries, traffic easily saw me and avoided hitting me like any other cyclist. 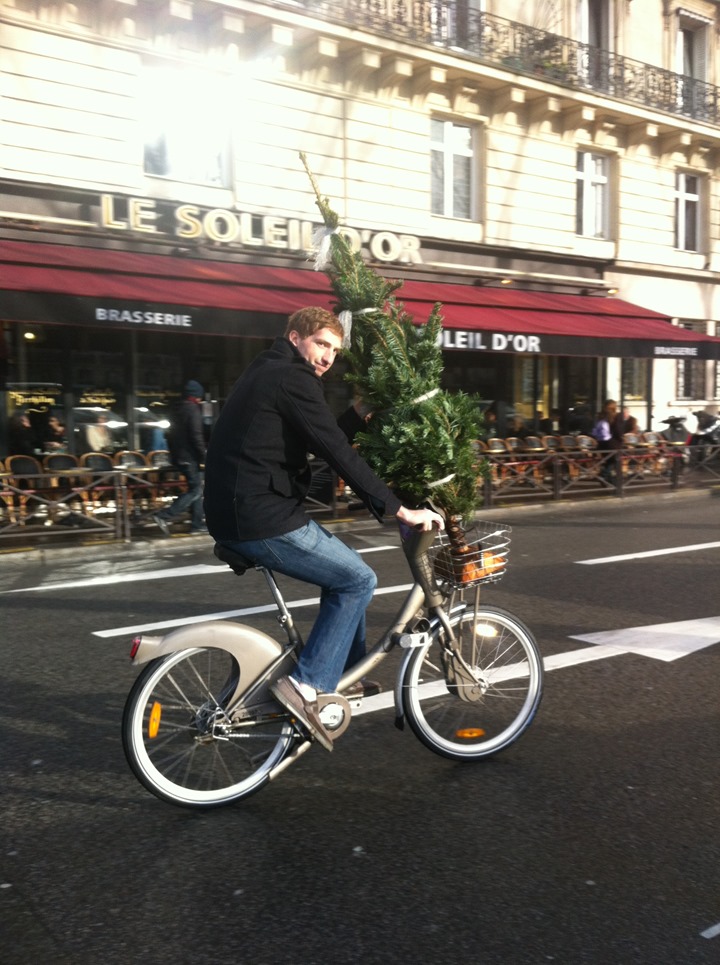 Soon I was at the Velib station nearest our house, ready for the short jaunt home. 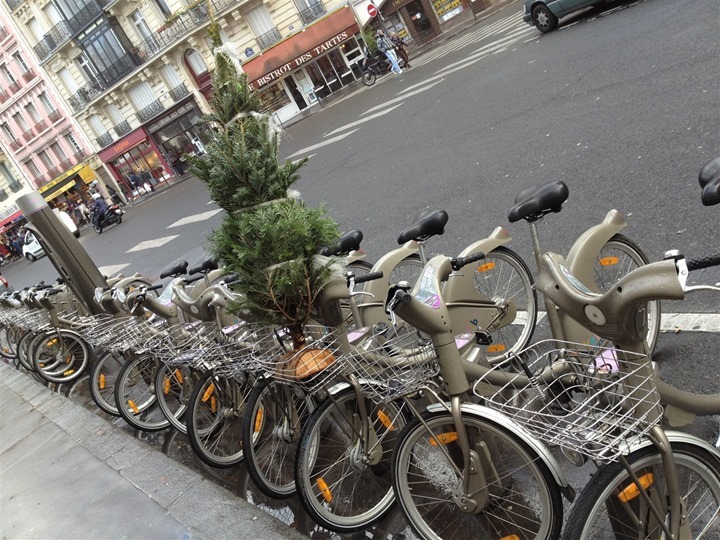 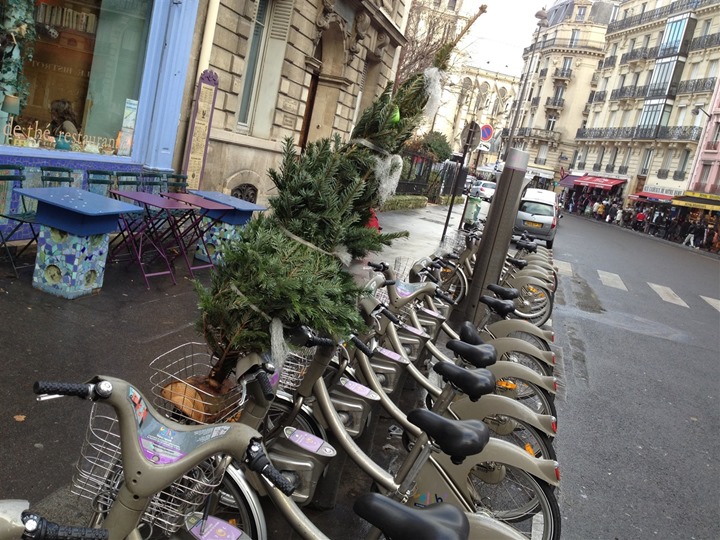 Here’s us, our tree, and our little elevator – all crammed in: 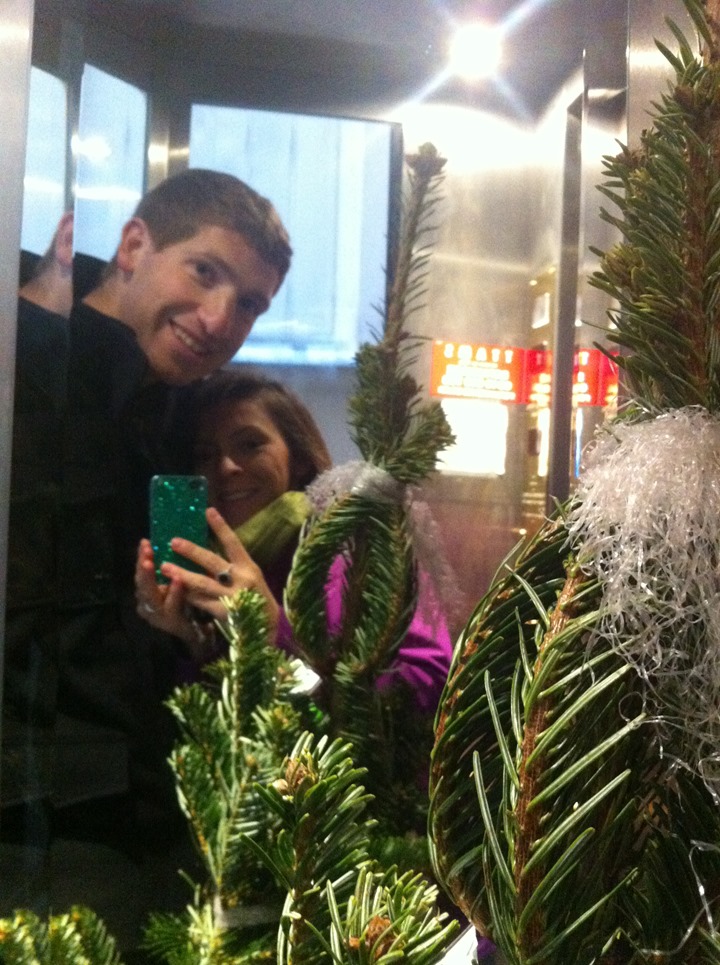 A couple nights later we went ahead and put ornaments on the tree.  Including a good mix of sports related ones, baking ones, and ones of us (like these two of us from our wedding): 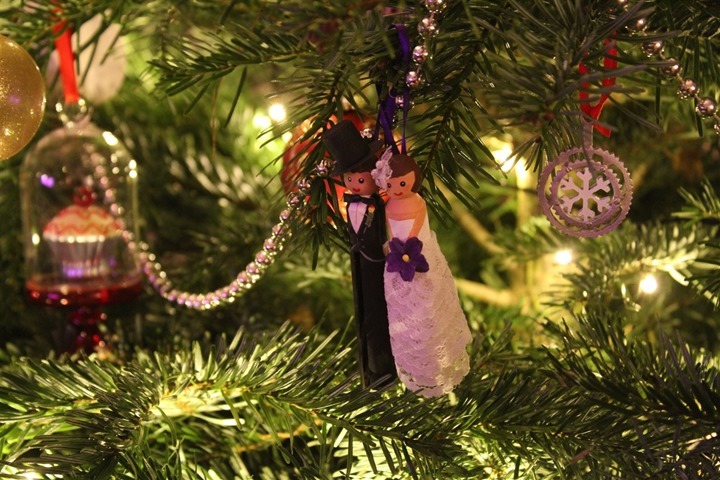 With that, we’re ready for Christmas!