I was out running errands the other day and stopped in one of the big Paris department stores – BHV.  Despite it only being a few blocks away, I hadn’t gone in yet.  But I was in need of two pots (a certain local bakery seems to have re-allocated two key pots from our collection) and since they had giant sale signs up I figured I’d drop in and see if they had anything on sale in the pots and pans department.

Upon entering the vastness of this seven or eight story building (actually, there are two buildings as I came to find out, one for men, and one for everything else), I started looking around for the cooking department.  I got lost along the way and ended up in the arts and crafts area, which is oddly where I found the below toaster.

Upon finding the toaster, I realized I wasn’t clear on what happened to our toaster in the move over here.  In fact, I hadn’t seen it at all since May.  So I asked The Girl about this just realized travesty. 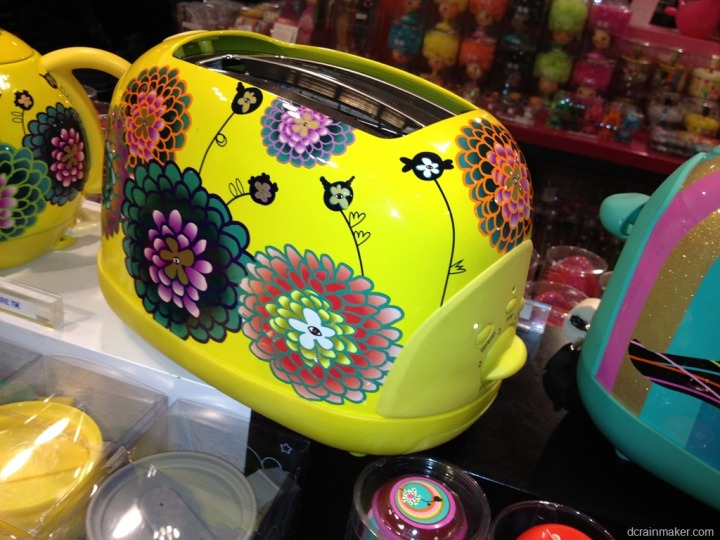 My vote to buy the above toaster was vetoed via text message.  However, upon seeing the price (79€ – or basically $100US)  – I immediately joined the veto train.

Anyway, while I was trying to find my way out of the arts and crafts department to whichever floor or locale the kitchen stuff was in (because apparently toasters are considered arts and crafts) – I started hearing a whole lot of racket.

More specifically, hand held microphone speakers and drums, and banging, and chanting.  Lots of chanting.  Not one to miss a spectacle I started wandering towards the noise (I know, probably unwise, like fire alarm procedures in reverse).

In doing so, I ended up in the ladies department.  Which, is why I was there and why you may see women’s clothing in the below photo.  I had no other reason to be there, other than it was between the toaster and the racket.

I just wanted that clarified so there’s no ambiguity about my placement in the ladies department.

Soon enough, I found the source of my noise: A full on marching protest through the middle of the store. 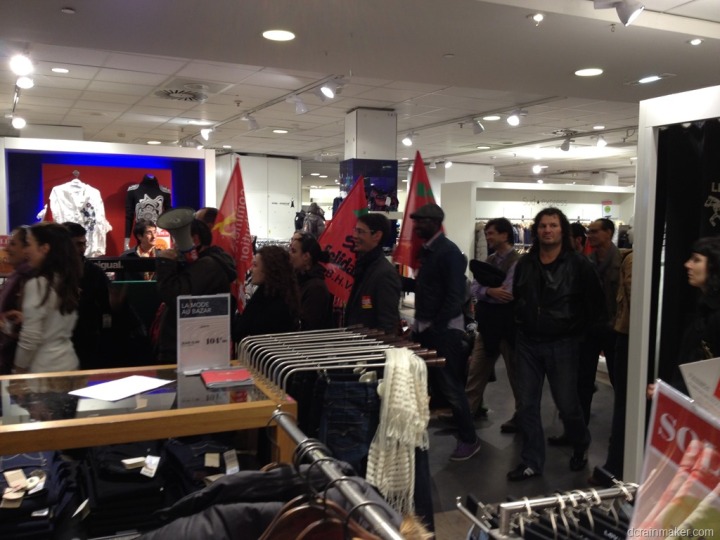 In total there were somewhere between 25 and 40 people.  It was a bit hard to tell since it wrapped through the various clothes racks.  And, there were some unwitting customers likely mixed up in it.

It wasn’t terribly clear to me what they were protesting.  And in fact, they didn’t seem quite as serious or upset as your run of the mill American protester.

The real kicker though was how little anyone else in the store seemed to care (aside from a curious me).  Store employees completely ignored it, and most other patrons appeared to as well.

Perhaps it really comes down to just how much folks seem to like protesting here in general.  For example, the topless protesters this past summer I ran into.  Or, any number of other protests that I run into on a near daily basis.  In fact, it almost seems more like a joyous sport.  Like a preplanned athletic event where people bring peanuts and cracker jacks and sing take me out to the ball game.  Serious and upset protesters I have not yet seen.

Which is good.  I enjoy topless and women’s department protests more anyway.