Unlike our attendance at the Women’s Triathlon the day prior, we didn’t have any tickets to the Women’s Marathon.  Instead, we’d just join a million or so others that would simply find a spot on the course and enjoy a mid-day rinse in the rain. 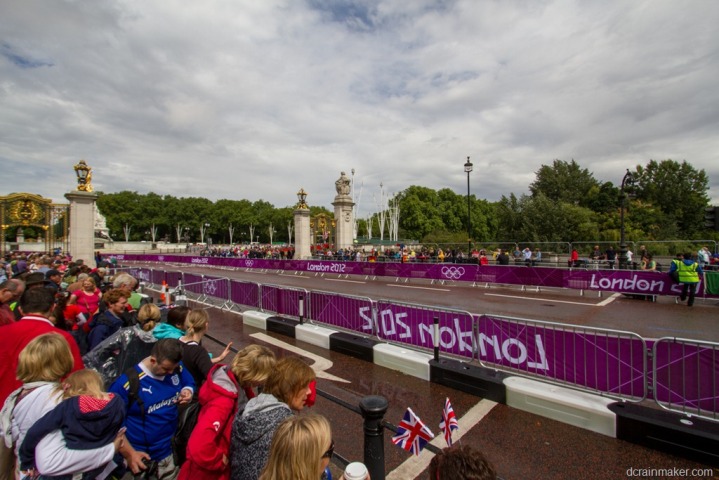 Initially, we got off the Tube (that’s their underground subway system) near Buckingham Palace.  However, in that area they had done all sorts of funky fencing work (see above) to make the athletes much farther away from the crowds, so we decided to Keep Calm and Carry on. 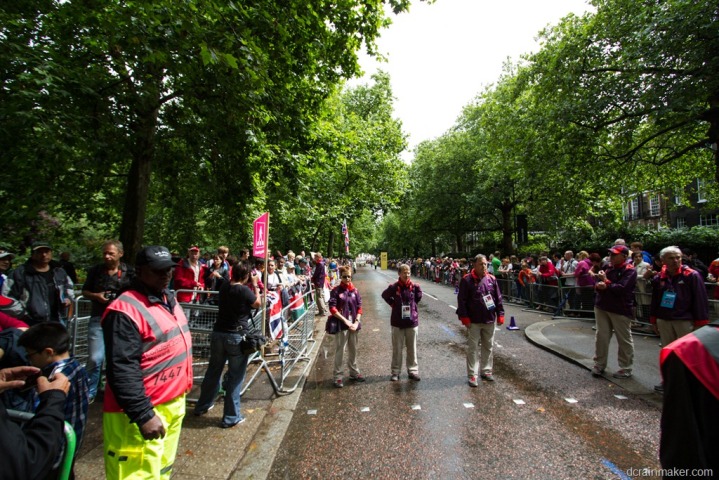 So we followed the course backwards about 800m or so.  Speaking of which, the Olympic course is a bit interesting.  There was one mini-loop of about 2 miles, followed by three bigger loops of about 8 miles each.  The mini-loop overlapped a smaller portion of the bigger loop.  Ultimately, depending on where you were on the course you’d see the runners either three or four times.

We decided on a spot under a nice tree lined bit of roadway, and nearby a water station as well.  Not too long after we arrived the lead runners came on through. At this point they were for their second larger loop.  First up though, was the pace truck (actually, prior to that were two other cars with various official-looking folks in them – about 2-3 minutes ahead). 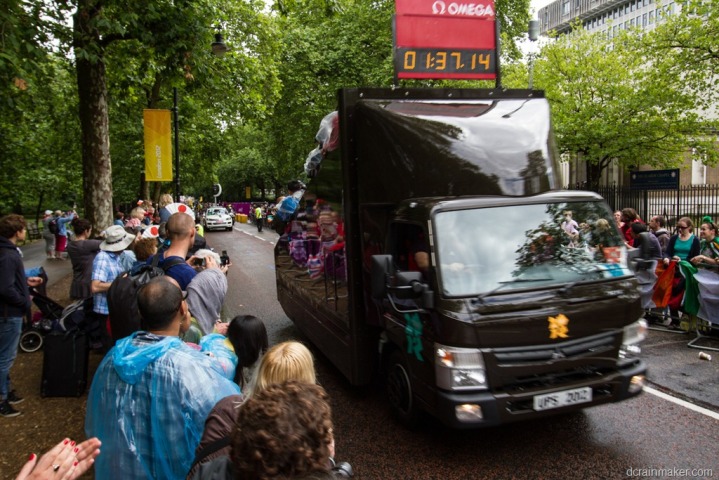 And in fact, prior to even those cars were the sounds of the helicopters above.  Just like the Tour de France, the helicopter sounds are the best indicators the racers are near. 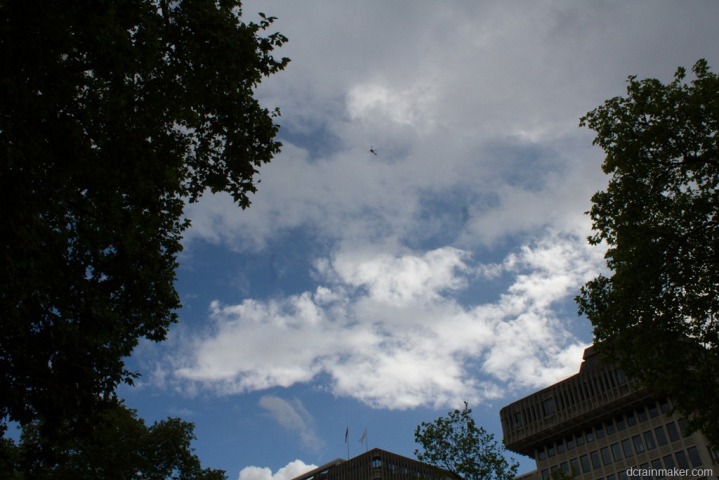 The time truck is interesting because while it may look like a normal truck from the front, it’s actually the media truck: 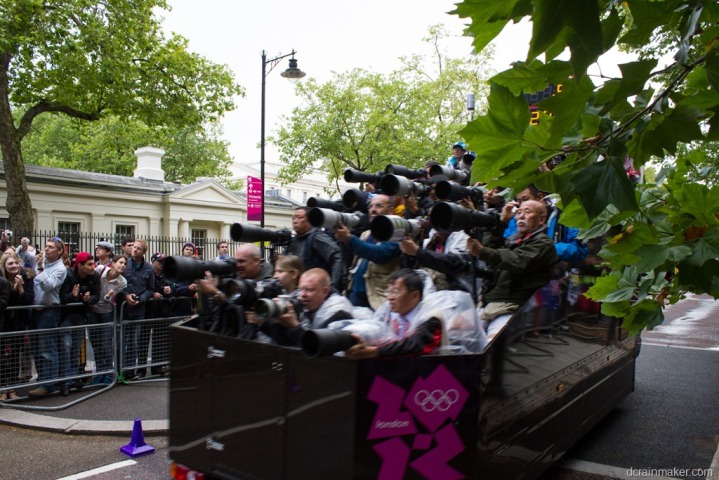 Then we’ve got the leader car.  This car has a camera built into the top of it – sorta like those Google Streetview cars: 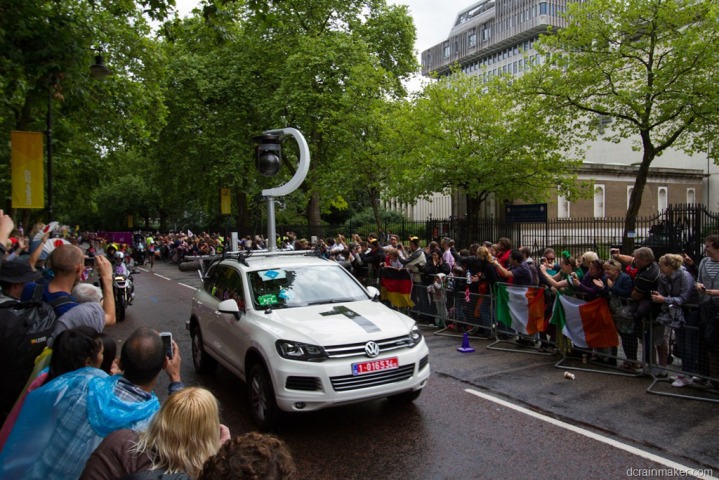 And then, finally behind that – were the lead runners: 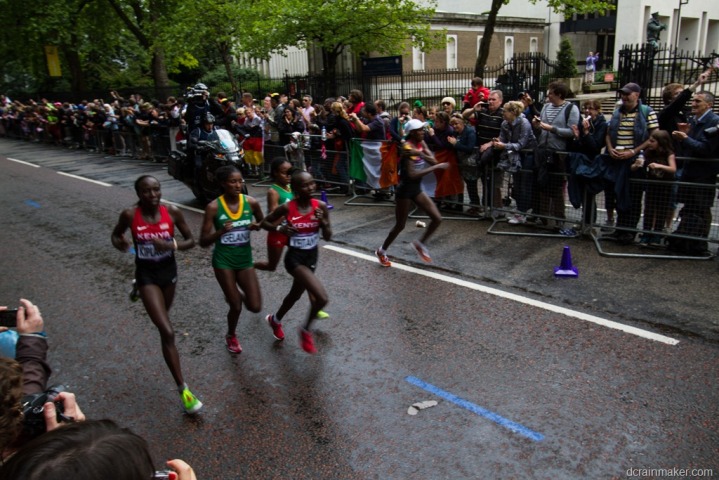 At roughly 5 minutes/mile – they weren’t staying around very long.  In a flash, they’re gone.

Next up was a string of the field in chase – including the American Runners: Flanagan and then Goucher. 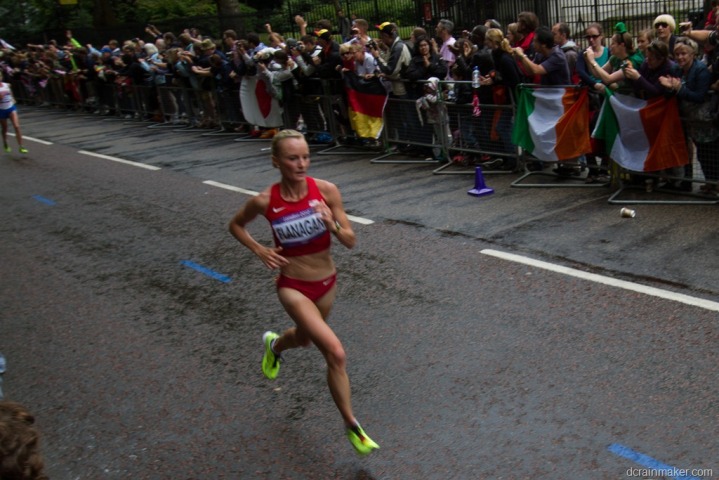 From there on out, there’s a long string of athletes.  It’s really just like a marathon in your local city – different competitors will run a variety of paces, and not everyone is going to be a medalist. 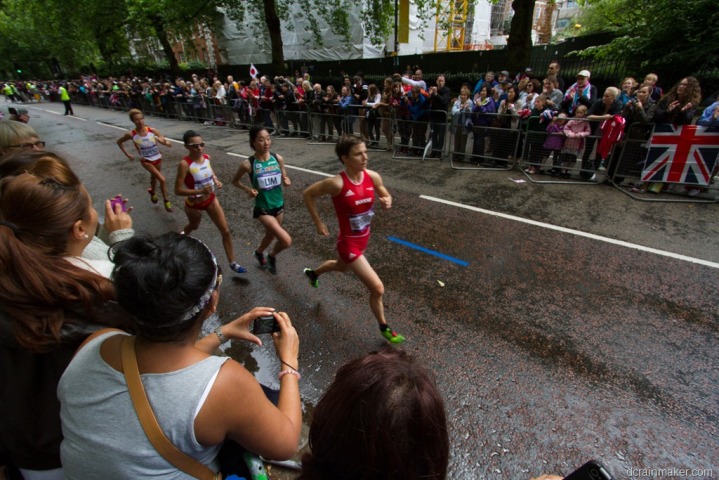 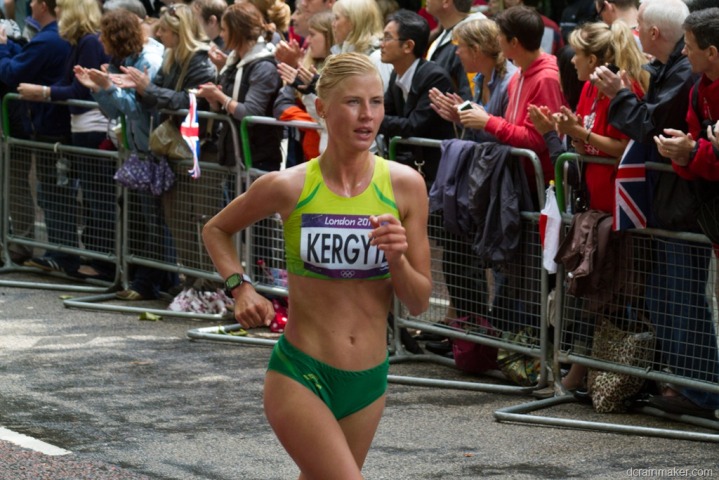 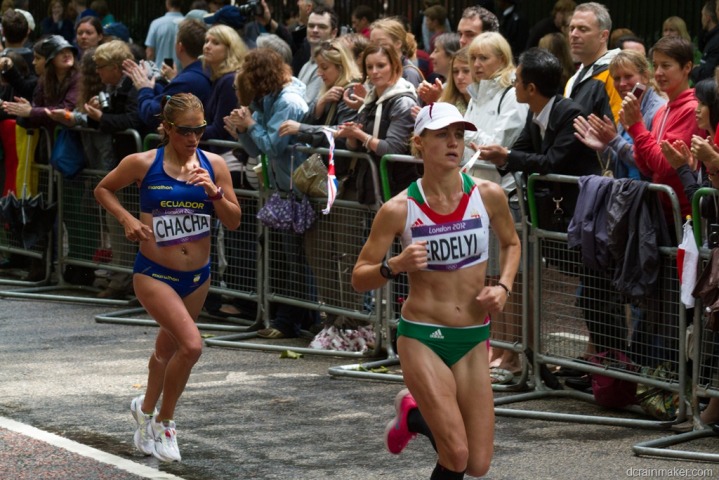 In fact, the field was so spread out by the second loop that there really wasn’t too much of a gap between the leaders coming around for the third loop, and some of the trailing folks on the second loop.

However, what did come as a surprise was the SAG wagon.  I guess I just never contemplated this in an Olympic event.  Perhaps I thought that the athletes who dropped out simply got picked up by a BMW hovercraft or something.  In actuality, it’s a minivan: 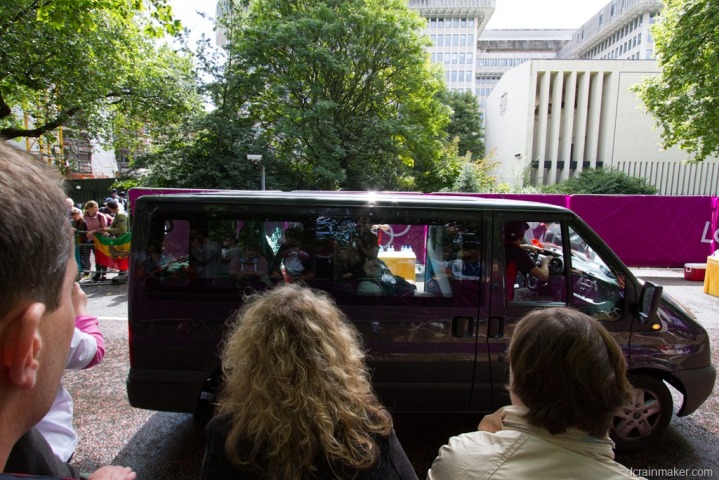 But worst of all, they share it with other athletes who were unable to finish.  In fact, one stopped right in front of me at a water-stop to let an athlete get on.  No doubt a heartbreaking way to end your Olympic journey. 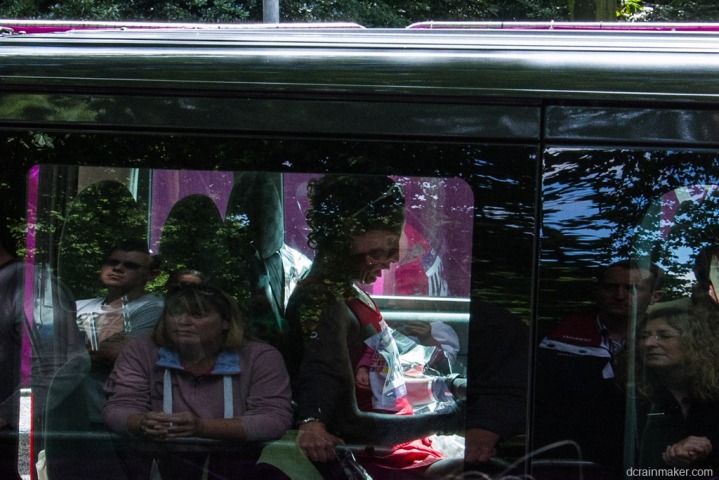 Meanwhile, in the very short time gap between when the leaders came by again – I walked over to try out some of the marathon course’s finest food options: 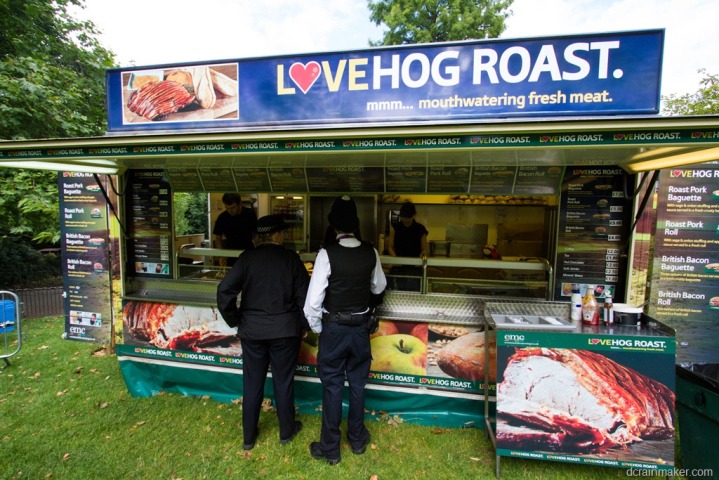 I decided on a pulled pork baguette (though called Roast Pork here).  And while it wasn’t greasy (a theme we’ve found with a fair bit of the food thus far), it did lack any juiciness or moisture.  So we added a lot of BBQ sauce.  Probably not enough.  Perhaps I have a future opening a BBQ place here – or perhaps I just needed to find a better BBQ truck.  I’m told my BBQ Pulled Pork is pretty awesome. 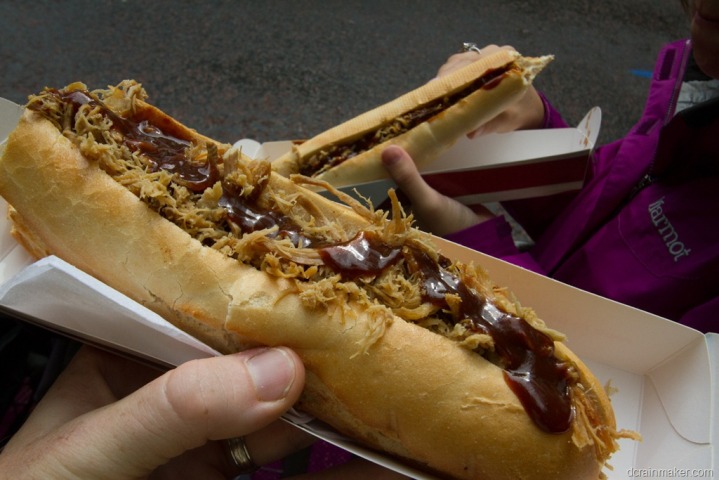 Back to the course, and the leaders.  We were at this point only about 800 meters from the finish – so standings were getting pretty close to being concrete. 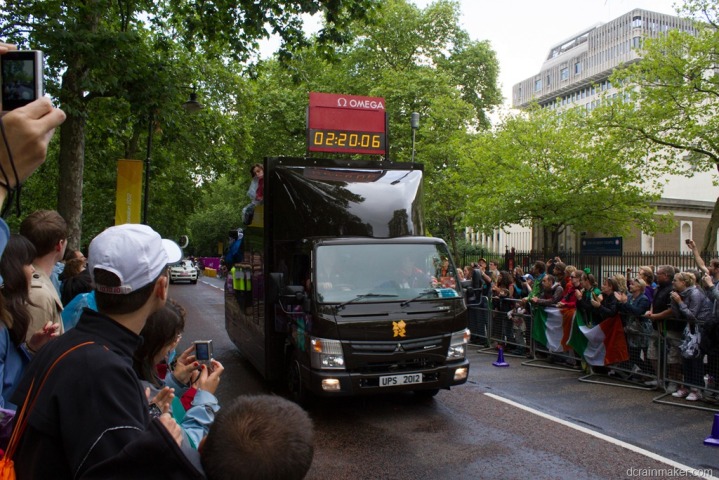 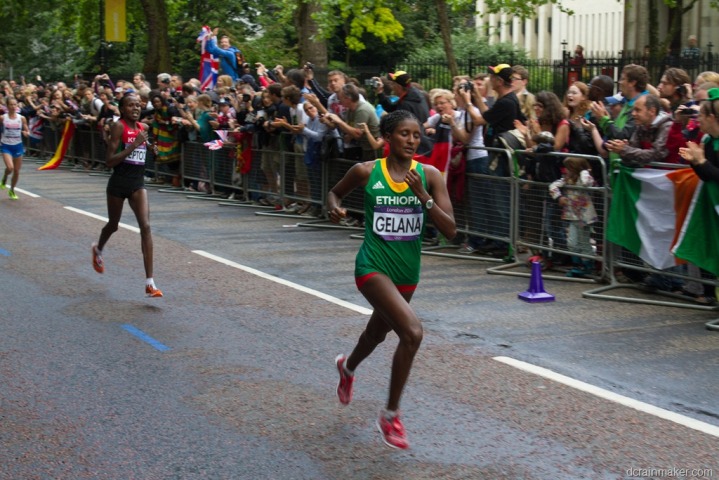 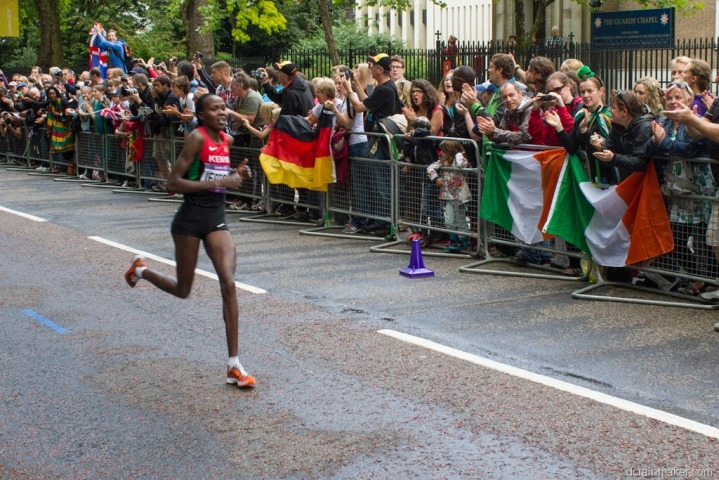 Around this time, the rain started to really come down.  Pretty much outright downpour.  Thankfully the Brits were well armed with umbrellas: 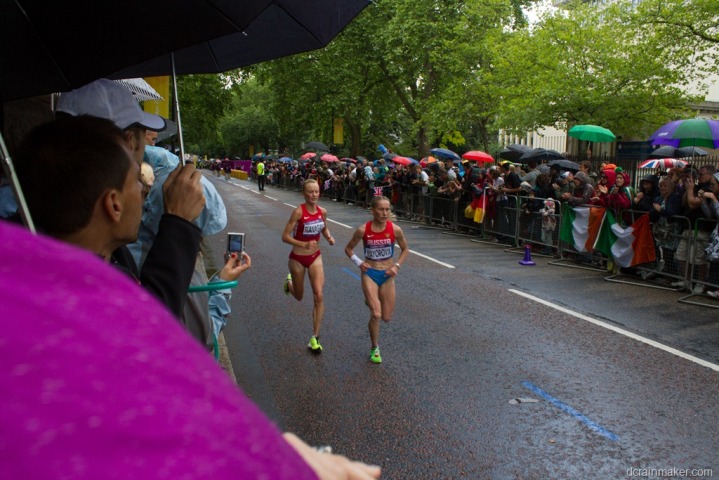 And everyone kept the cheering up quite loudly – especially for both British and American, but really for just about everyone: 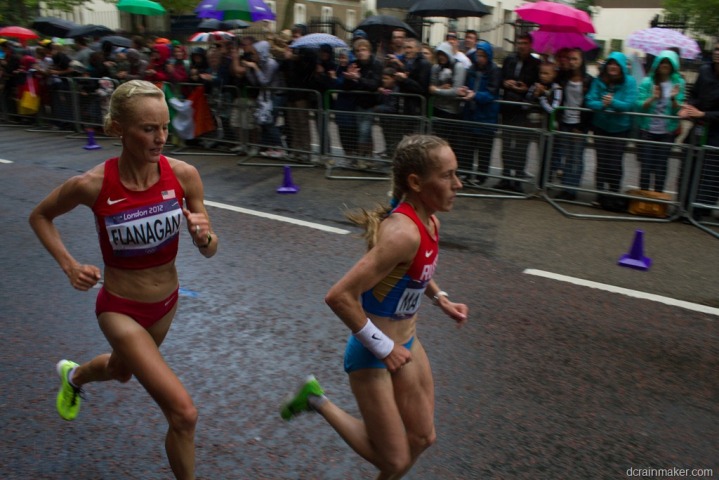 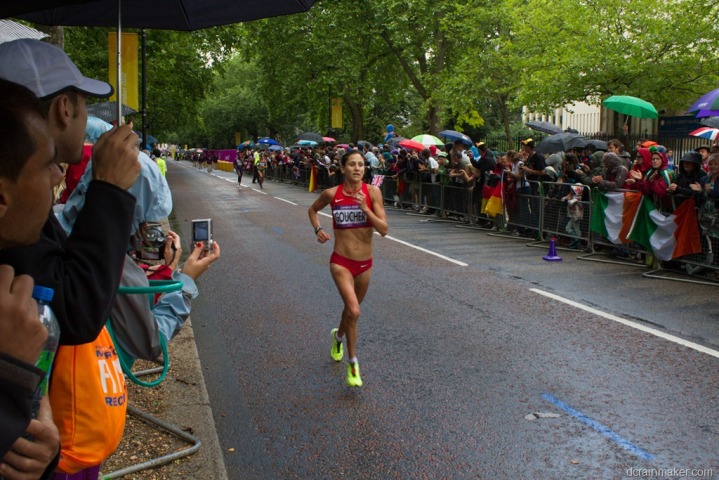 And despite the rain and being only 800 meters from the finish – the athletes kept on picking up water, both for themselves to drink, and to cool themselves with water.  Interestingly, some athletes preferred the sponges that were available, while others preferred the good ole water bottle emptying method: 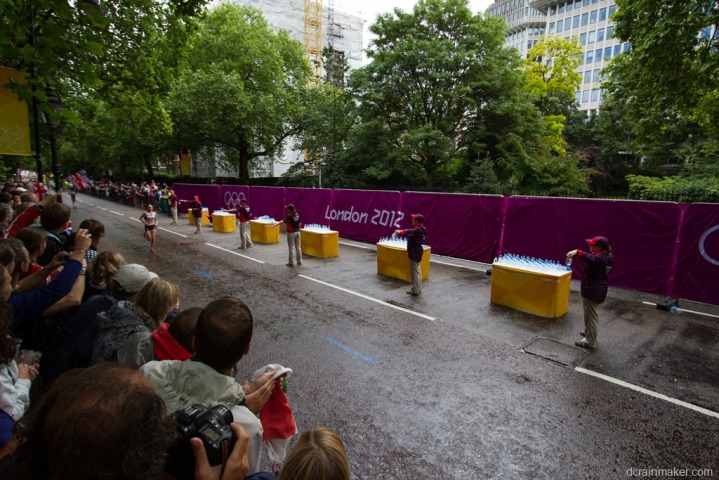 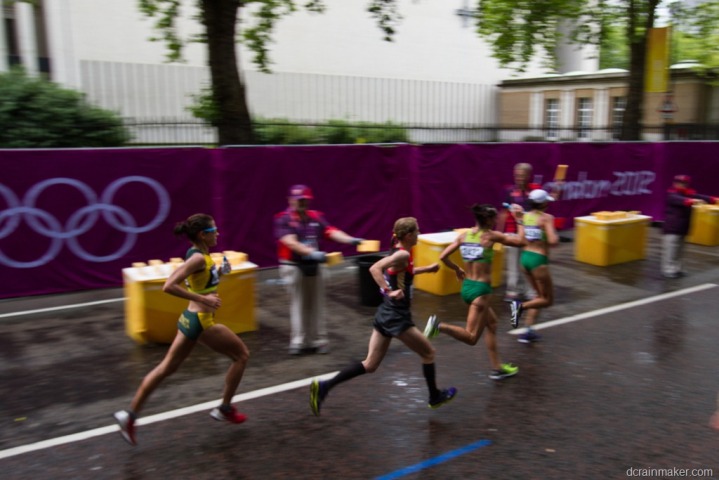 I also found it interesting how many attempts most athletes took to get the bottles.  On average, it seemed it took two tries to pickup a bottle.

After the leaders had passed and finished, we started moving forward through the course towards Buckingham palace (and the finish): 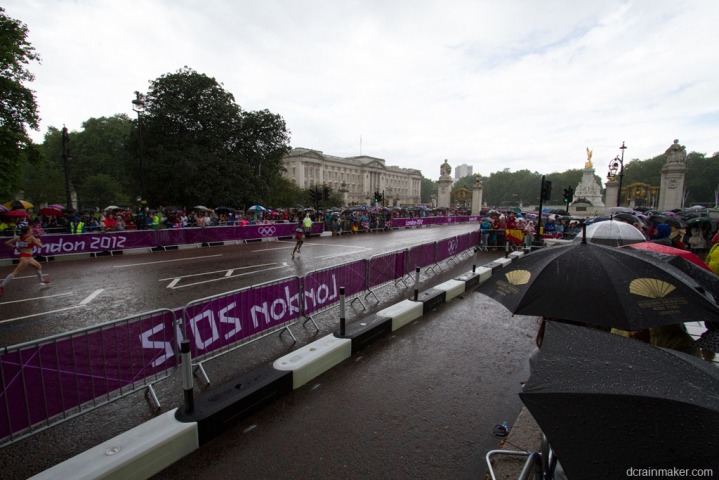 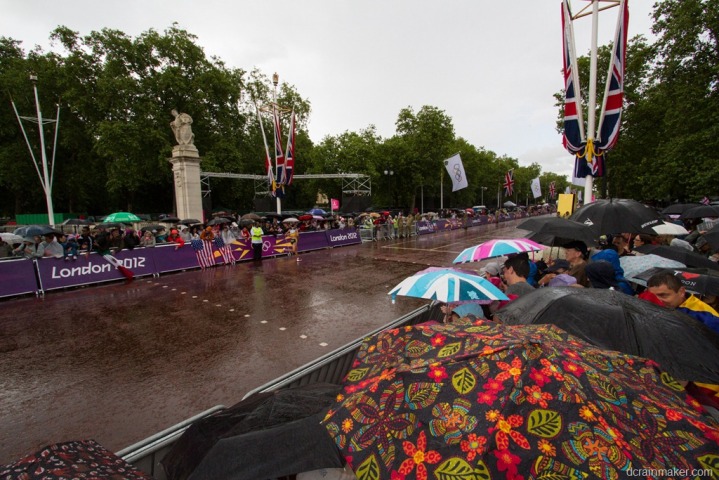 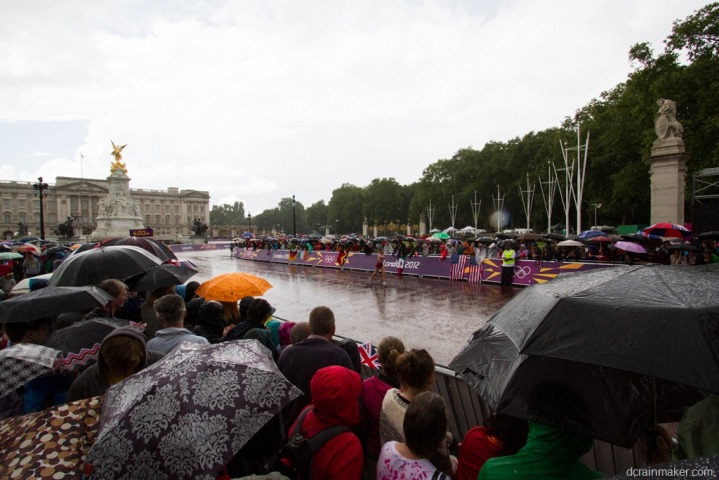 Perhaps I thought it would get drier.  More sunny even. 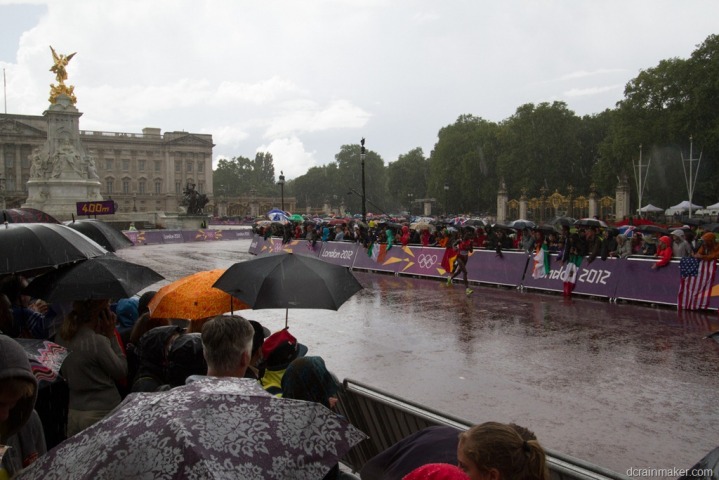 Only wetter.  Much wetter.

So we walked back in the other direction – quite a ways in fact, all the way to Big Ben (the tower/clock thing).  And indeed, we found sun.  Lots of it.

But, what we didn’t expect to find was one last athlete.  I posted this photo to Facebook yesterday, which became immensely popular – but I thought it was worthwhile posting here with a bit more to the story.  After everyone else had finished, there was one last runner out the course – though with the fences clearing out you wouldn’t have known it (we didn’t).  Turns out that Caitriona Jennings, from Ireland was still out on the course.  All by herself – just the entirety of London watching her. 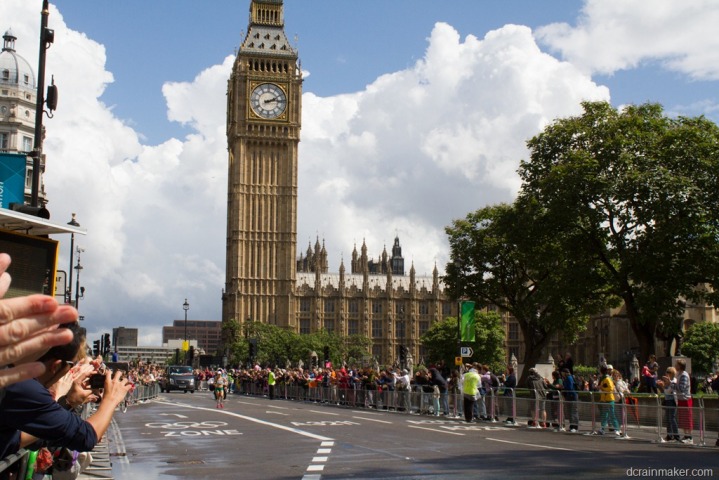 But she wouldn’t give up.  Despite not having the day she wanted (her PR is in the 2:35 range), she didn’t just call it a day.  Nope – she kept on chugging. 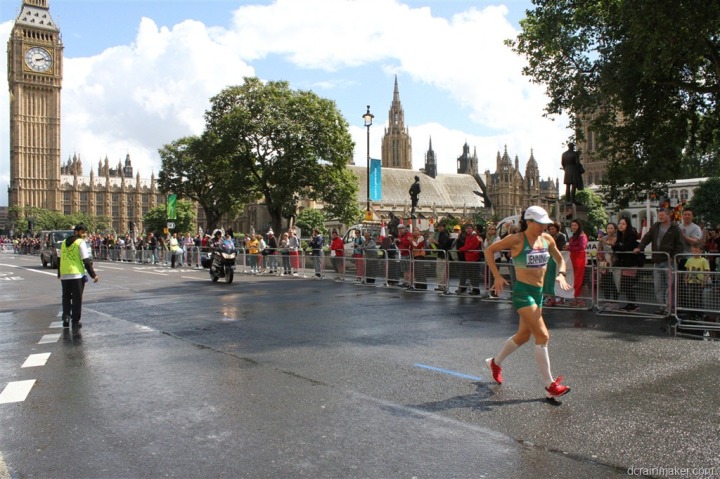 She’d go on to finish in 3 hours and 20 minutes, nearly 57 minutes behind the leaders.  For the vast majority of athletes here, they only get one Olympics.  She made the most of it.

Well, almost the most of it.

With the SAG wagon slowly creeping behind her, she decided not to make the most of their services – and finish the course fully on her own. 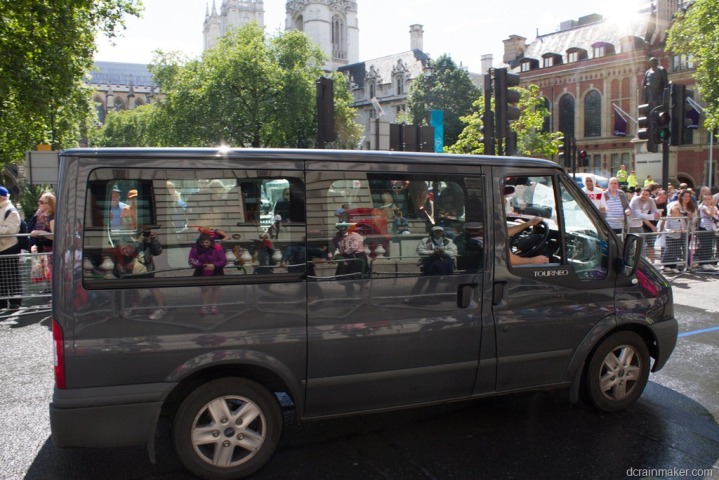