Our stay in London was fairly short – only four days.  But we still got to see a lot during that time.  Including both the men’s and women’s triathlon – as well as the women’s marathon.  But we did get to see one other event I didn’t post about – the Great Britain vs Korea Football game (that’s soccer, btw).

However, we almost didn’t get to see it at all.  We had purchased the tickets at the last minute when a bit of them came available on the official site earlier in the week.  When I bought them, I thought I looked at the venue and mentally placed the stadium roughly in London.

Turns out, it wasn’t.

In fact – it wasn’t even in the same country as London at all.

Rather, it was in Wales.  Which, is not England.  Yes, it’s confusing.  And no, I’m not going to try and explain it here.  Go watch this short YouTube video explaining it, and then come back.

No – really, go watch the video.  I can’t help you if you don’t watch it.  Even though you’ll still likely be confused afterwards.  At least you (and I) tried.

Now, all in all – this wasn’t a horrible thing.  At least it wasn’t like finding out that your Sailing event at the Beijing 2008 games was actually held in Qingdao – over 800km away (don’t worry, not an issue for us).  The only catch to our Welsh dilemma was that we didn’t realize it until about 4 hours before game time.  Which isn’t a lot of time to figure out how your going to take a 2hr train ride to somewhere in a different country.

We quickly started scouring the Olympic site – which offered tons of transit options…all of which were noted as sold out.  And, none of the information on the site helped to clarify what our alternatives were (of course, they’d never suggest anything not an Olympic sponsor).  So we decided to head on down to Paddington Station and simply see what the rail folks there could do.  We only paid 20 Pounds for the football tickets – so if all else failed, it wouldn’t be a horrible loss.

Once we got there, we surprisingly found they had wide-open trains about every 30 minutes to Wales, with the journey being about 2 hours.  The friendly lady kindly got us return tickets and we were on our way.  I’ll note that the train ticket cost was three times that of actual event: 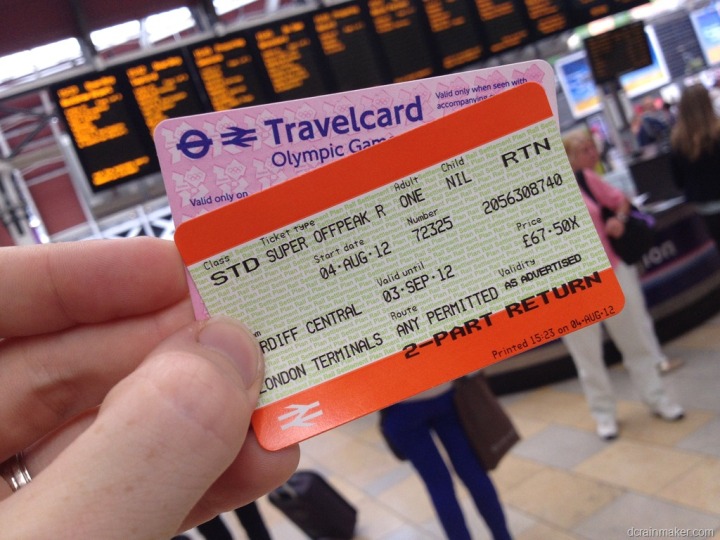 Onto the train we went for a nice ride across the countryside, ending at the chaotic train station where 70,000 football fans were streaming into the stadium a few hundred meters away: 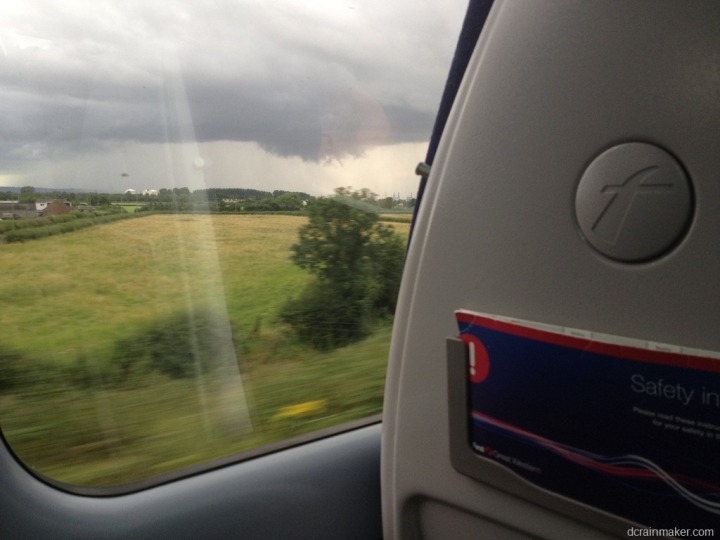 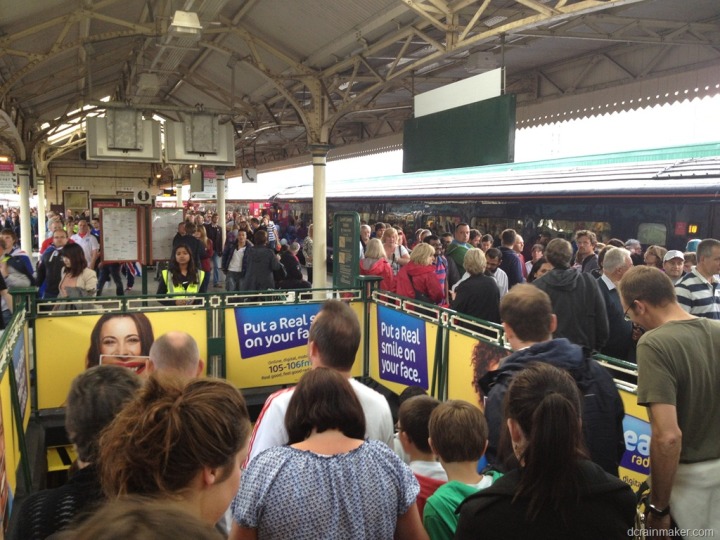 Once we got in and  found our seats – total sweetness!  Oh, and yes, there was plenty of GB flags: 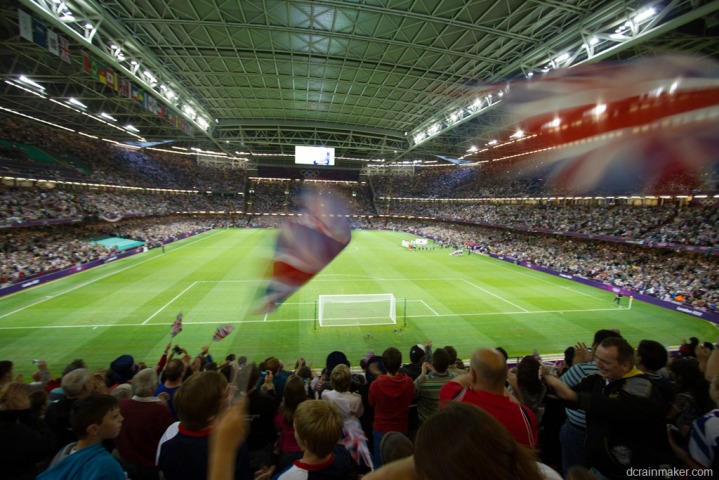 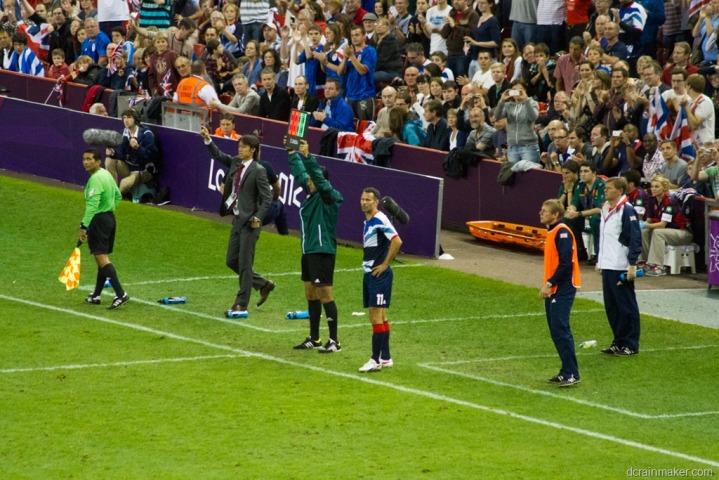 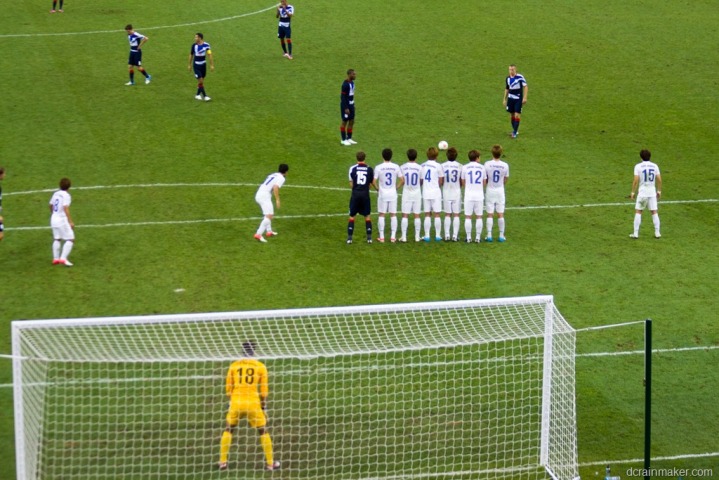 The game itself wasn’t exactly the sporting pinnacle of football for Great Britain.  In fact, despite cheering for them, one could probably say they deserved the loss based on how they played (which wasn’t well).

On the bright side – with the game going into double-overtime, plus penalties – we got our money’s worth! 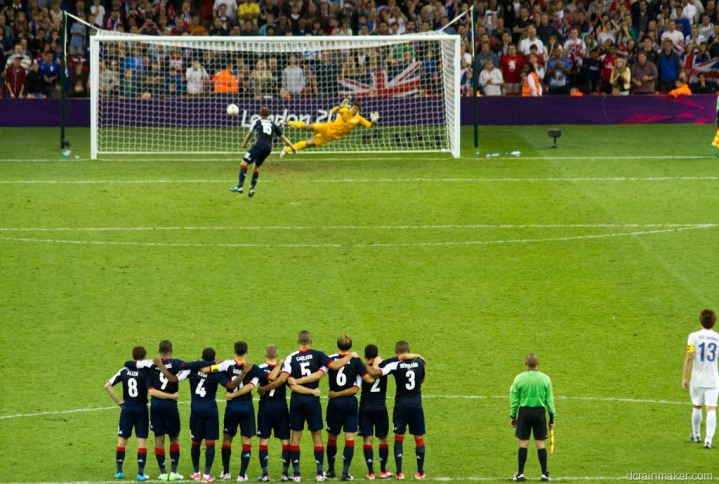 I thought it was interesting to watch some of the credentialed press setup remote trigger cameras behind the goals.  On our side there ended up being two cameras behind the goal (plus three mics).  Whereas the other side had half a dozen.  The thing was – they weren’t protected at all from errant balls, as we saw one mic get nailed by a missed kick later on.  Also of interest was how few photographic press were covering the game compared to other events – likely just not worth the 4+ hour round trip. 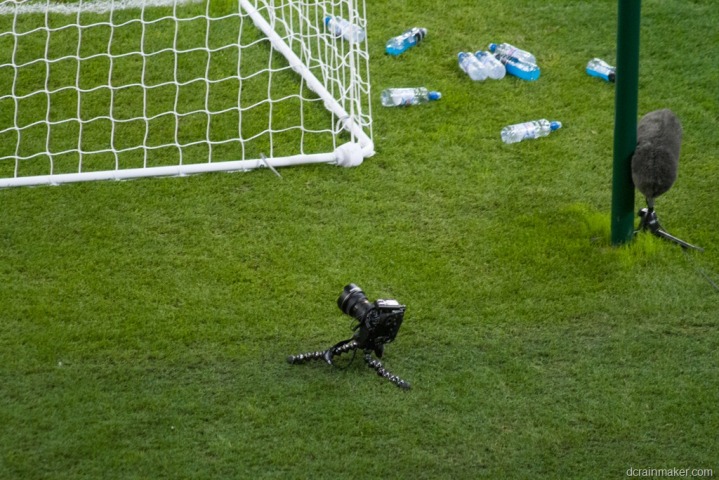 After the game, we caught a completely packed standing-room only train back to London (two more hours): 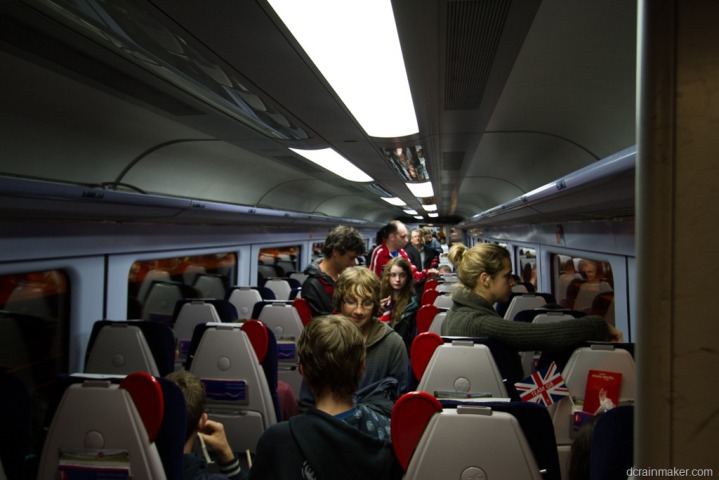 Only to counter that packed train was a completely deserted 1AM subway train to our hotel.  Nobody got on the entire train except us. 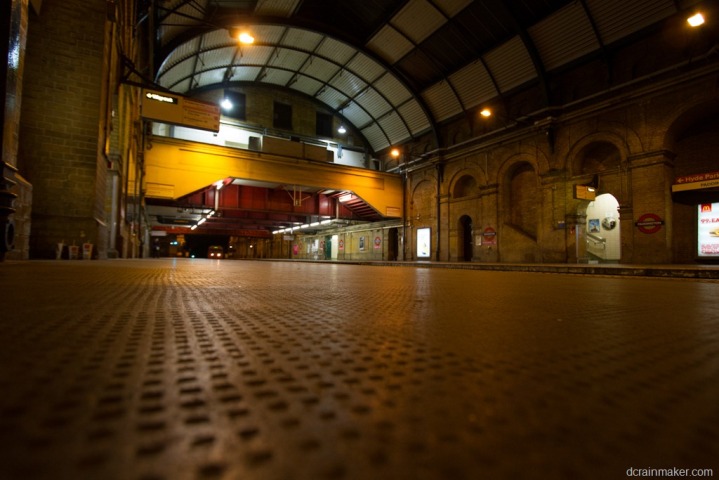 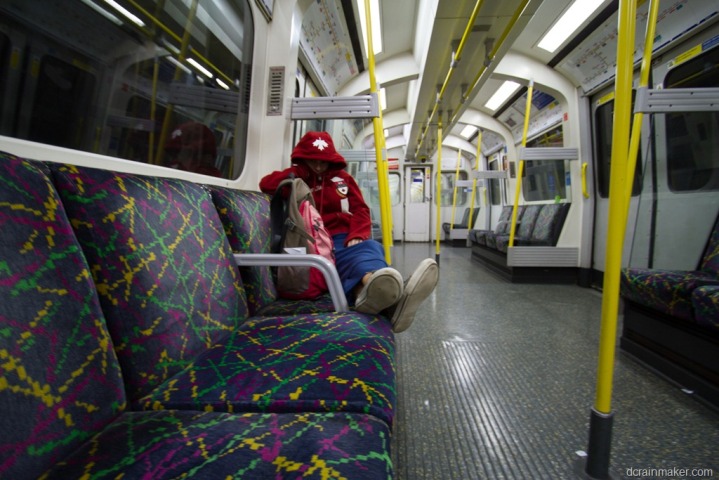 Here’s a few other odds and ends from our stay…

London has a nifty bike sharing program, however, I don’t believe the owner of this particular bike understood how it works: 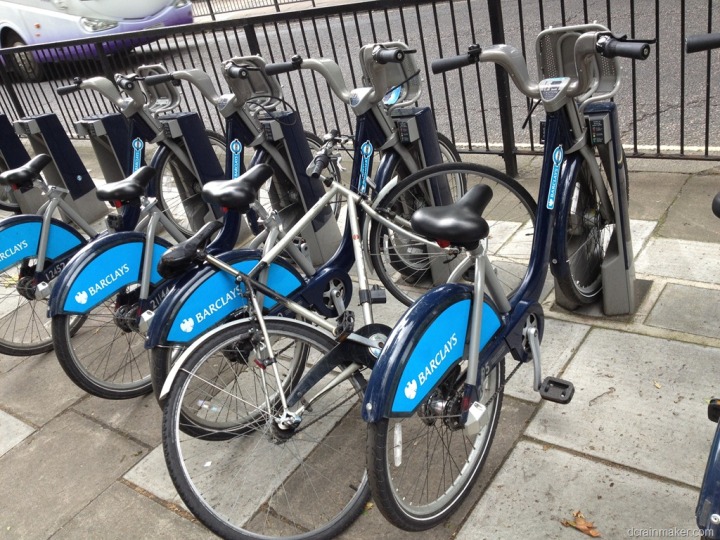 I thought it was interesting that while in Wales, all of the Olympic signage had both English as well as Welsh: 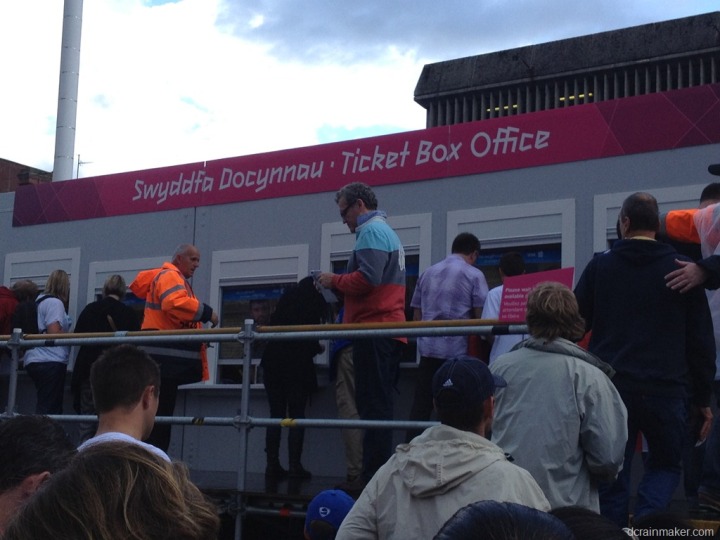 All day and night in Hyde Park they had setup five massive screens to watch different events on.  We went out one night to hang out on the grass (err…woodchips) and watch the 100m sprint final with Bolt: 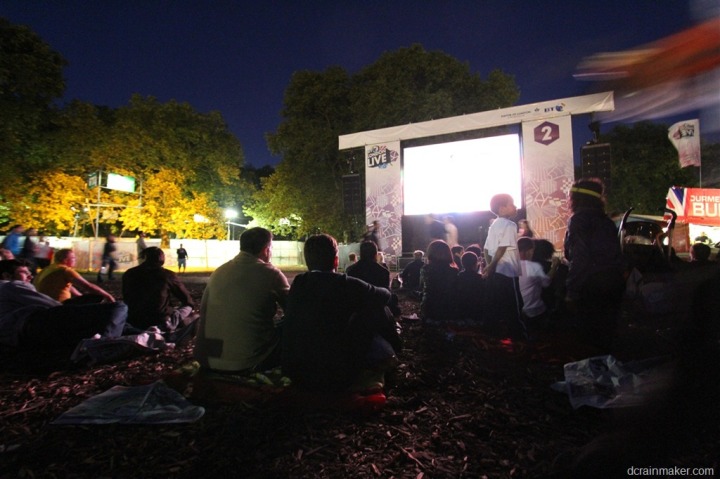 We were surprised by just how much trash would be left behind though at the end of the night – everything you see is bottles/garbage.  However, this was somewhat the repercussions of having approximately 1.2 under-the-sink sized trash cans per five stadium screens.  In general, we found trash cans extremely hard to come by throughout many of the venue areas (likely for security reasons). 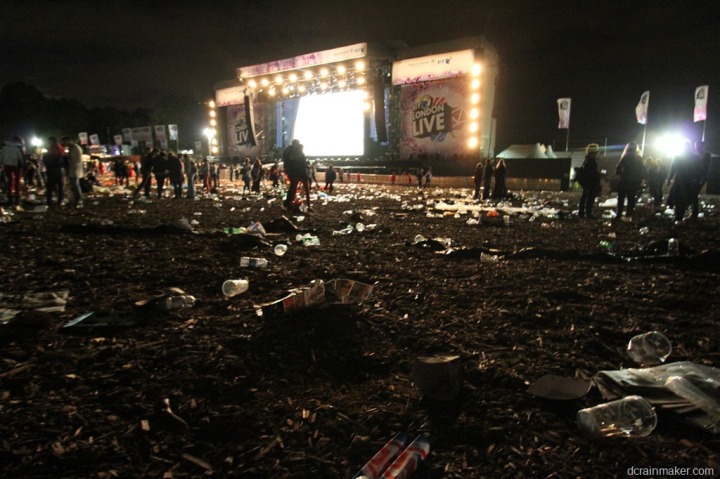 It was cool how all over the city every bar, eatery and place with a TV had it tuned to the Olympics.  You’d just be walking by and pause for a second to watch an event finish: 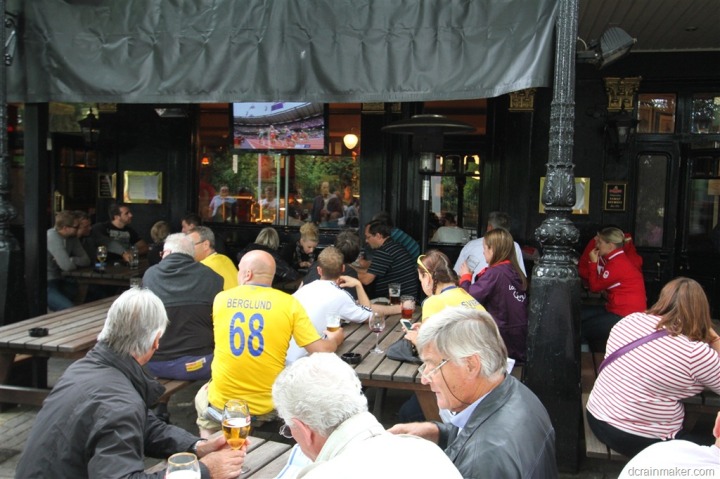 I stopped by the Hyde Park Olympic shop to check out the goods.  Unfortunately we didn’t have access to the main Olympic Park (only ticket holders in that venue area did), so we poked around in the smaller version instead.  Want a rubber duckie? 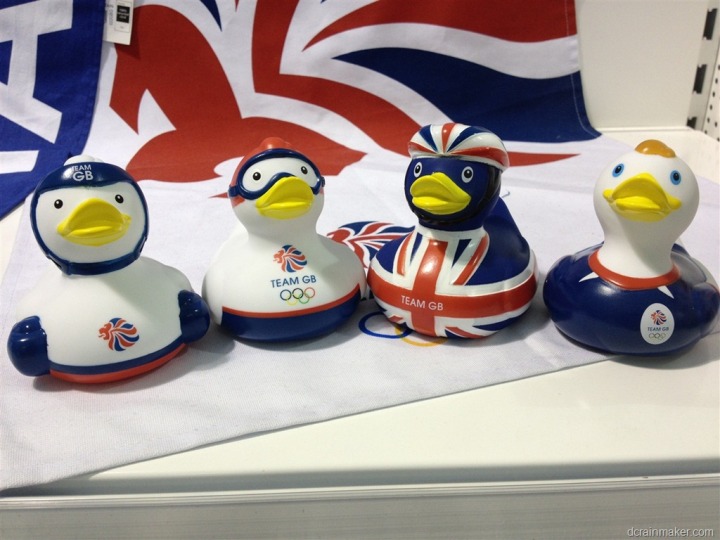 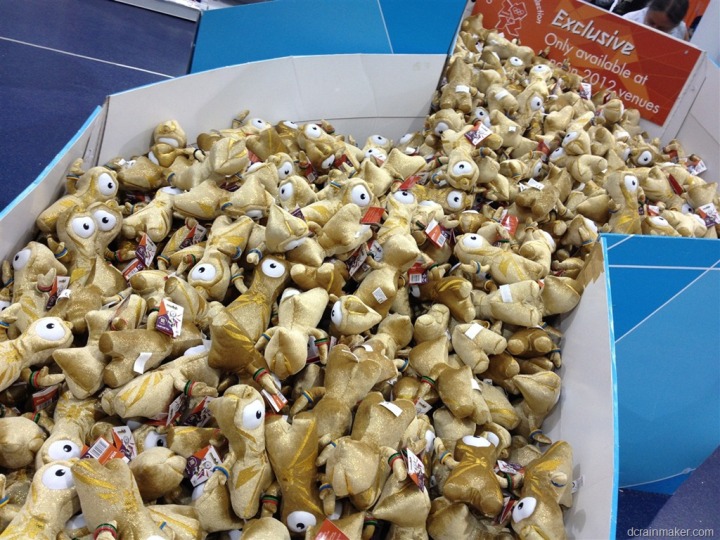 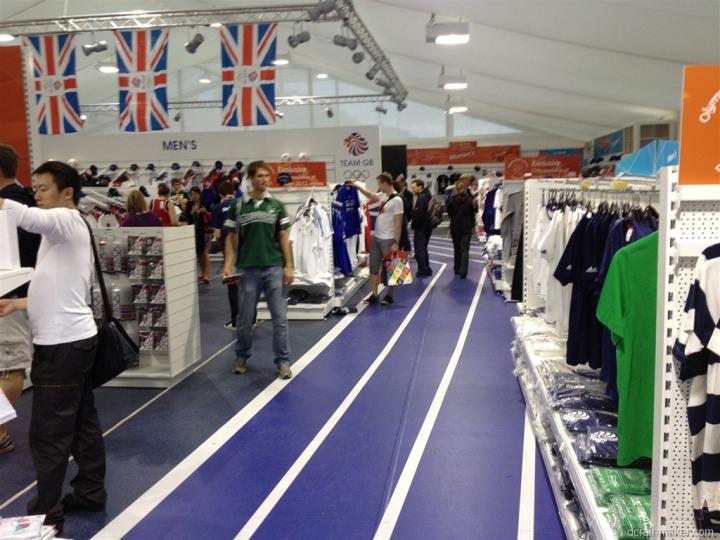 Next door was a booth with Adidas MiCoach stuff setup, you could run around and do all sorts of things: 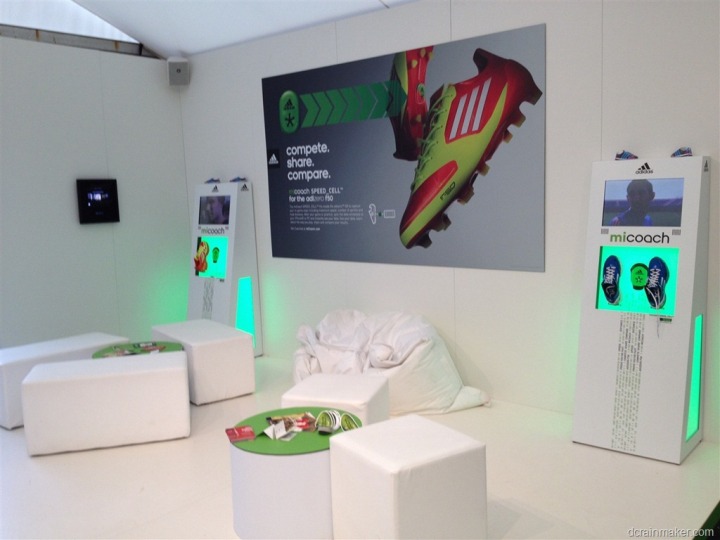 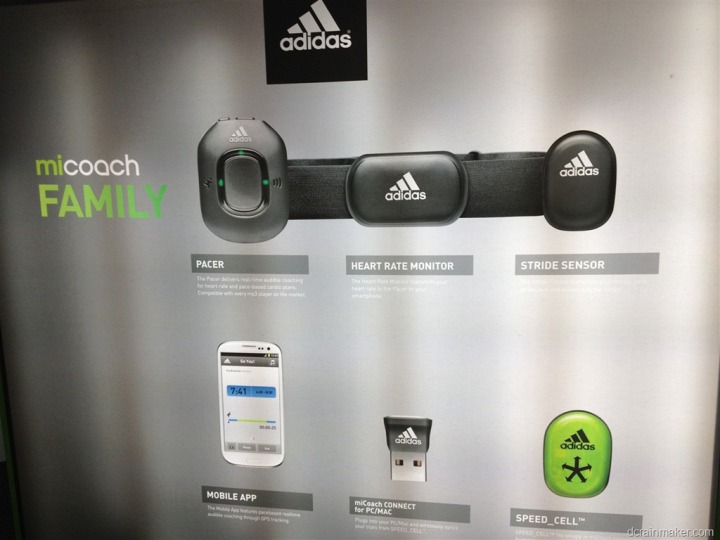 Or, you could just built a little paper shoe-shark.  I know which one I did: 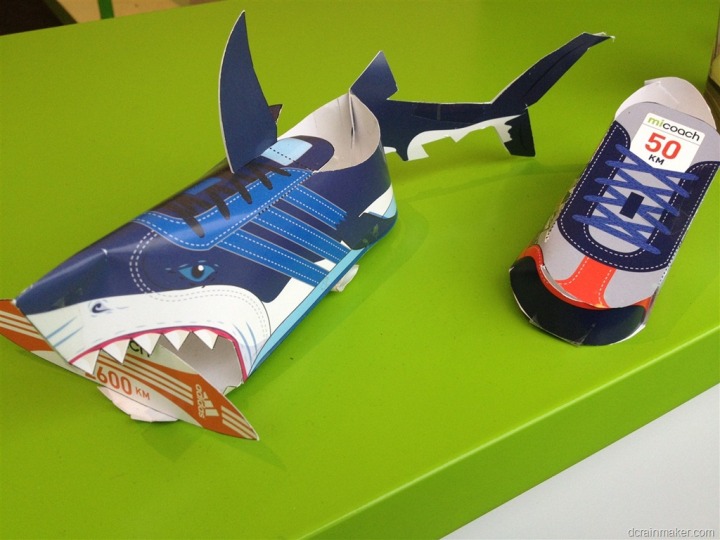 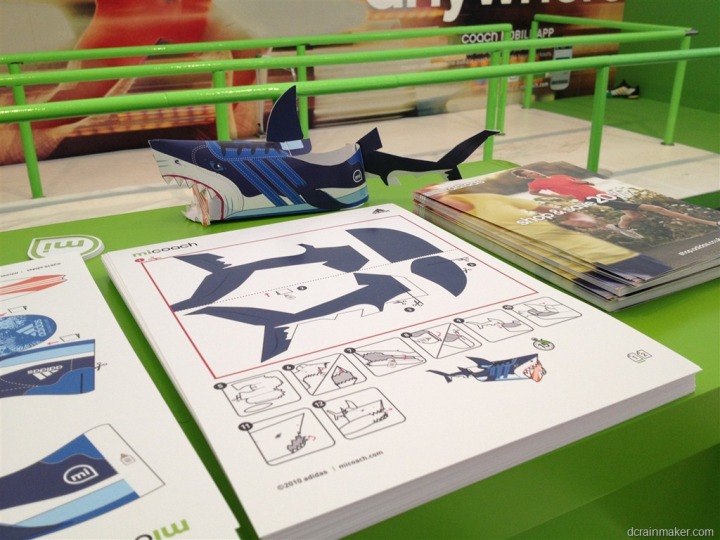 If building a paper shark wasn’t your thing (why not?), you could instead go buy something really expensive – like this giant metal cyclist: 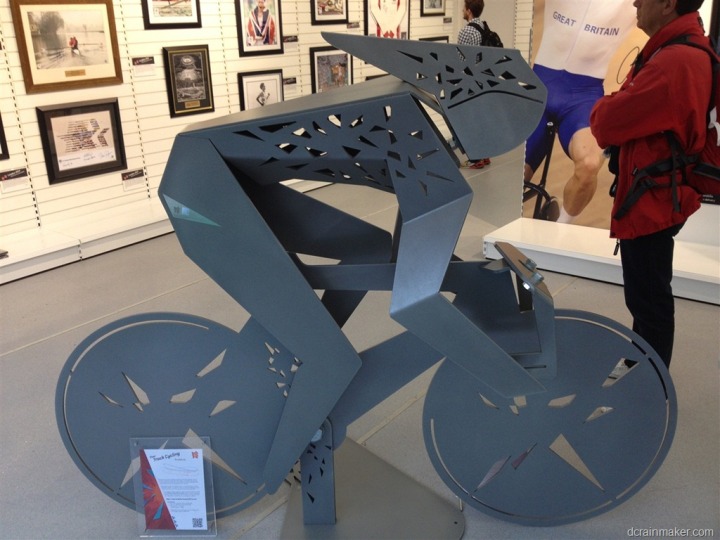 Meanwhile, they remind you to ‘alight’: 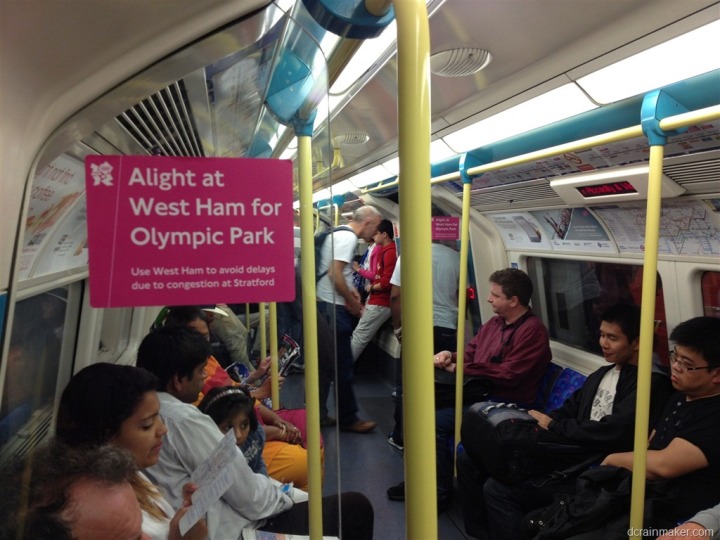 With that – our trip to London was done.  Time to alight for us as well!  Thanks London for a great games! 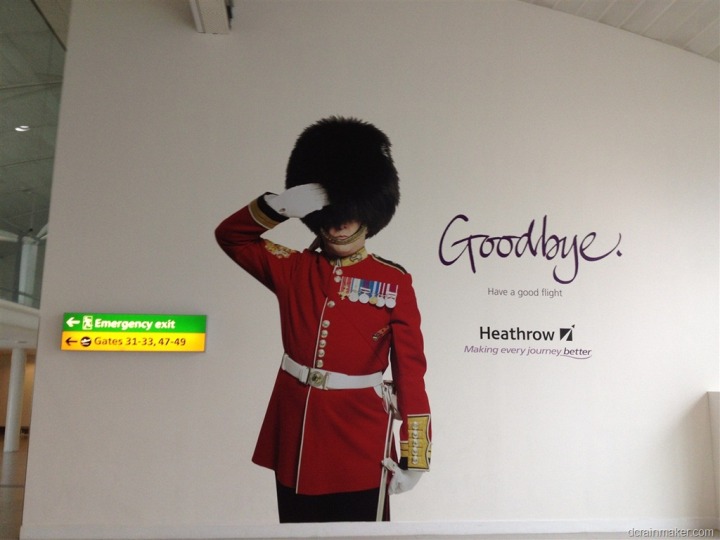 Oh, and for those curious why I would fly, rather than train (per above photo), I was heading to Germany next.  The Girl rode the train back to Paris though (which is how we initially got to London).

And thanks everyone for reading and following along!