Going into this morning, we knew the crowds would be big.  Really more like huge.  Gigantic even.  The media had warned how packed the Hyde Park venue and surrounding areas would be with the Brownlee brothers competing for another Team GB medal (or two), and the women’s triathlon photo-finish on Saturday only helped to elevate the sport within the local press.  It’s quite likely there’s never been a triathlon event with so many people spectating in person (or online) at once.

We got to the venue about two hours prior to race time.  Like 99% of those here, we lacked tickets to the Men’s Triathlon.  Only a few thousand of thousand of those existed – and it was one of the hardest tickets to get in the entire London 2012 games.  However, I did receive a ton of requests to meet up with folks along the fence, and ended up meeting up with two former Washington DC area (now Ireland) readers on the north side of the course just outside (to the left) of the transition area.  This would give us on-fence access to the bike and run, and some visibility to the swim.  Here’s what it looked like prior to the start: 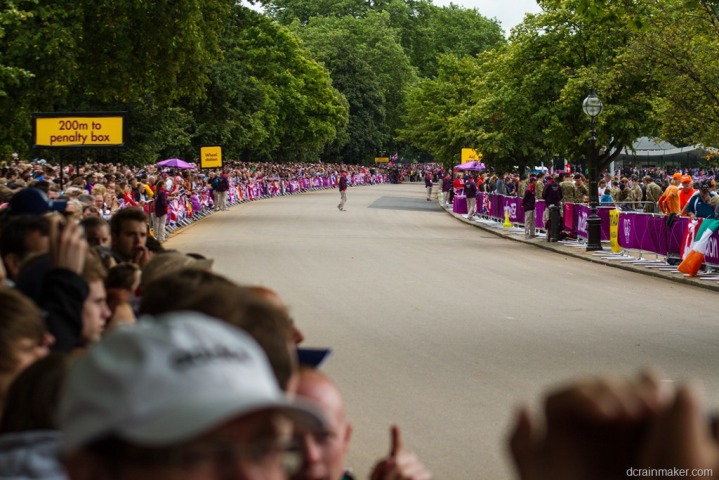 Due to the significant number of trees and ill-placed people in our way – we didn’t have a terribly clean photographic view of the swim start.  Though, as I noted on Saturday with the women’s triathlon, aside from the roughly 1-second that the athletes are in the air, there’s not a ton of buildup or excitement in a triathlon swim start (from a spectator standpoint).  Nonetheless, if you look below you can see the little green heads lined up on the pontoon: 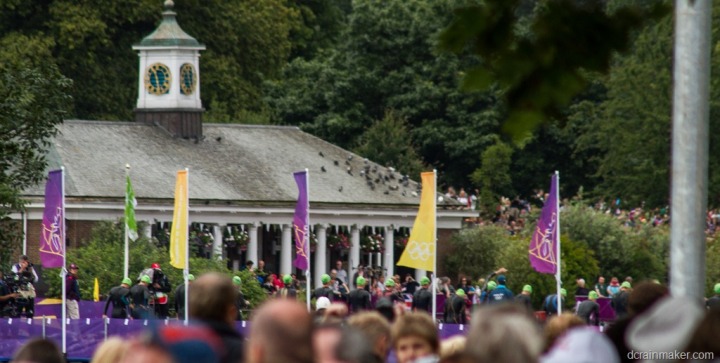 Eventually, those heads would disappear – hence our signal that the race had started (or, I suppose, that they just all decided to go get Ice Cream instead).

With the swim-course being a single-loop around the pond/lake – we didn’t get to see them for the first half of the event, as it was on the far side – away from us.  However, once they hit about the 700 meter buoy, they came into view.  From our perspective, it was mostly just a green bobbing thing in the water with splashes around it.  I had to trust that all the cheering was for Olympic athletes – and not just some random London swimmers taking a dip in the chilly wetsuit legal waters. 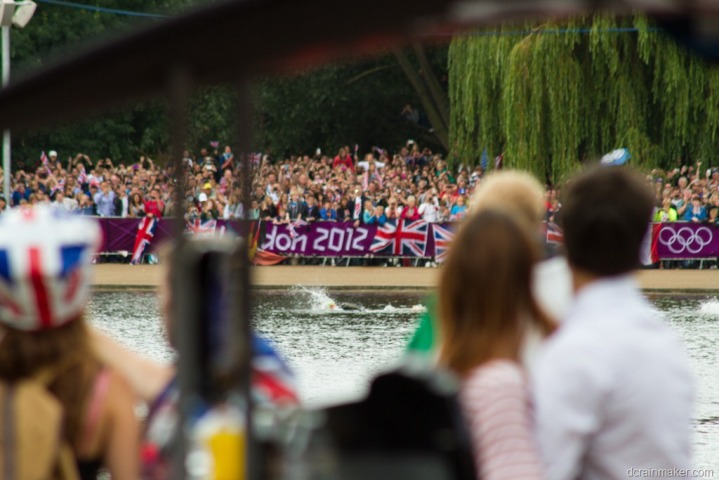 The swim pace was crazy fast – blowing through the first 500 meters in five minutes.  Unreal speeds for a triathlon. In total, the leaders would exit the water at 17 minutes – incredibly quick.  You can see the green capped men exiting the swim and heading into the blue carpeted transition area, below. 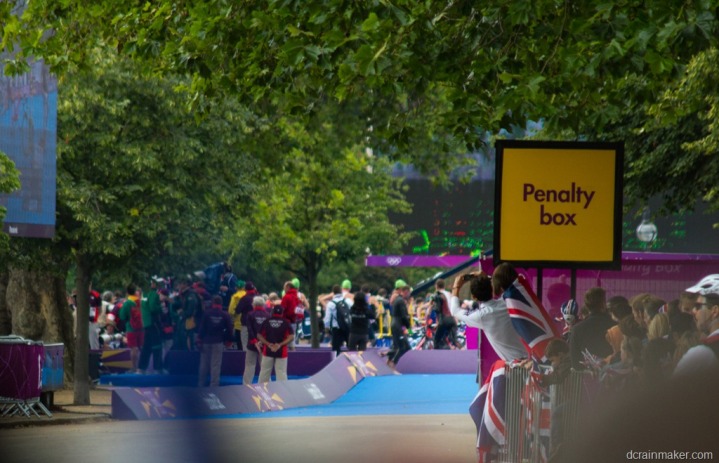 Within a minute or so of the leaders exiting the swim, we heard the unfortunate news that multiple-Olympian Simon Whitfield was in a crash – which would ultimately take him out of the competition.  Not a good few days for Canadian triathletes.  A causality of that crash was also Costa Rican Leonardo Chacon, however he was able to finish the race.  Here’s a photo of him that I took later in the run – note the shredded tri suit: 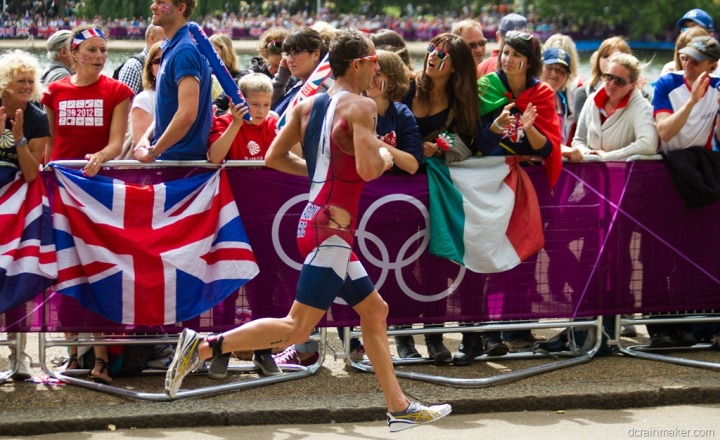 The bike course consisted of seven loops at 6.3KM per loop – for a slightly wonky total of 43KM.  Given there was no rain or wet roads (unlike the women’s triathlon), the speeds were definitely kicked up a notch – and it wasn’t long before the men were swinging back through.  Leading the charge at the front were the Brownlee brothers: 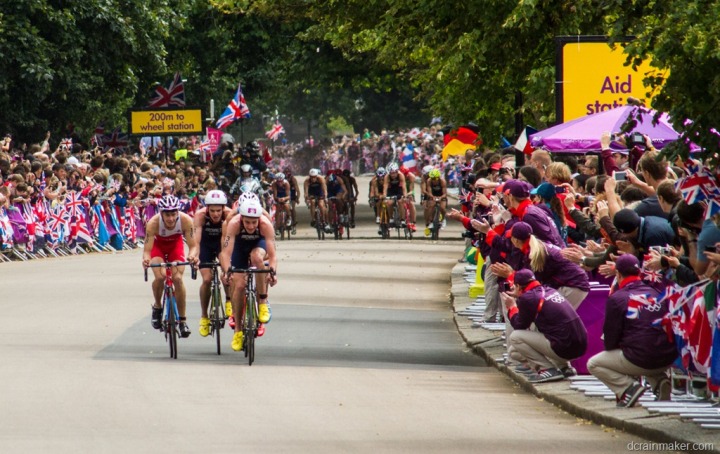 Though you could see that not too far behind was the first chase pack.  Here’s the initial leaders flying by early on: 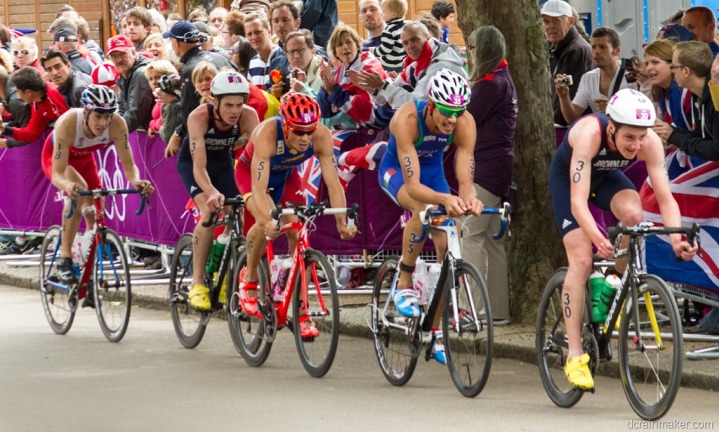 I should point out that while I have/took over 400 photos this morning – a significant majority of them consist either partially or entirely of the British flag.  While we were close to the fence, we weren’t quite at the front of it – so all of my shots were taken with my camera over my head, aiming and hoping for the best.  At the same time, all of the British flags were positioned over their heads, waving and flapping. 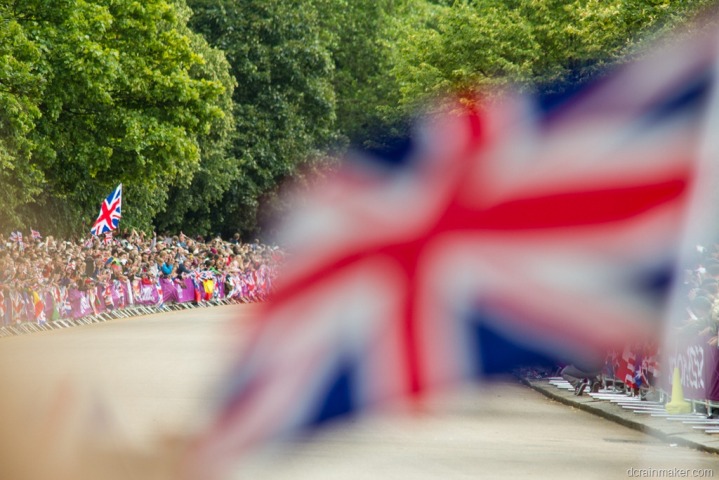 Over the next several laps the different chase groups would merge together into two distinct groups.  Clearly the men selected to work together, especially in the case of the chase pack that reeled in the lead group.  The initial 30 second lead that the leaders initially had simply wouldn’t have been enough to hold off most larger packs in a flat and fast course like London.  Perhaps in an extremely hilly or technical course with rain – but certainly not today. 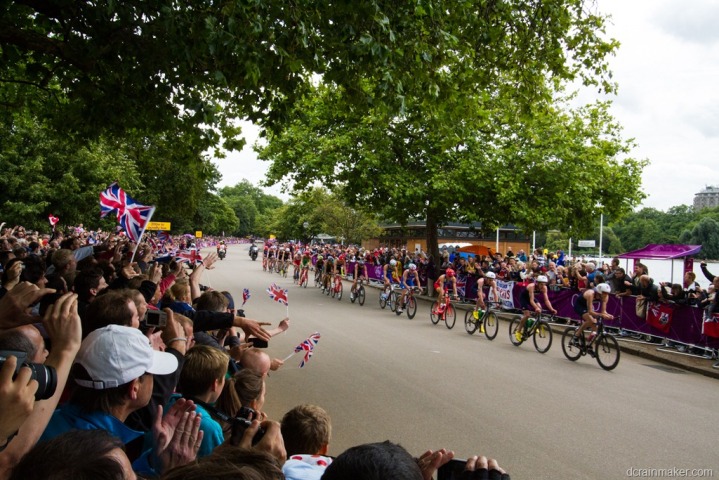 As always, it was interesting to note the tactics of different athletes within the pack – some choosing to work harder on the bike, and others selecting to save their energy for the run.  This is obviously tied to the strengths and weaknesses of each athlete.  Stronger cyclists will try and break away to make up for a slower run time, however, it’s a bit of a cat and mouse game – with the pack athletes having to make decisions on whether or not a given breakaway attempt is a true threat.

As the final bike lap neared, you could notice out the athletes taking their feet out of their shoes in preparation for the flying dismount.  Most elite athletes do this to save time within transition.  Occasionally it doesn’t work out (usually on the mount, rather than the dismount), but in most cases it saves precious seconds. 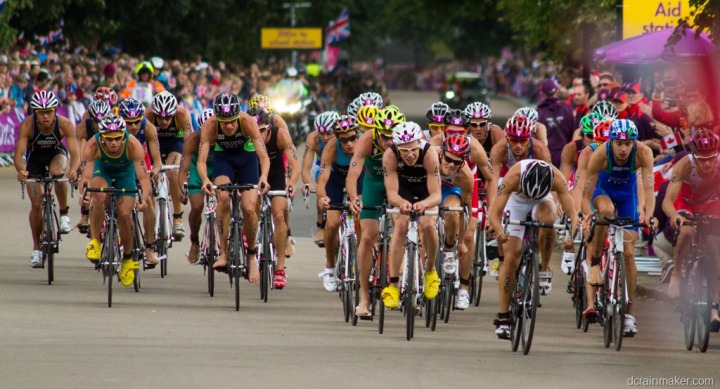 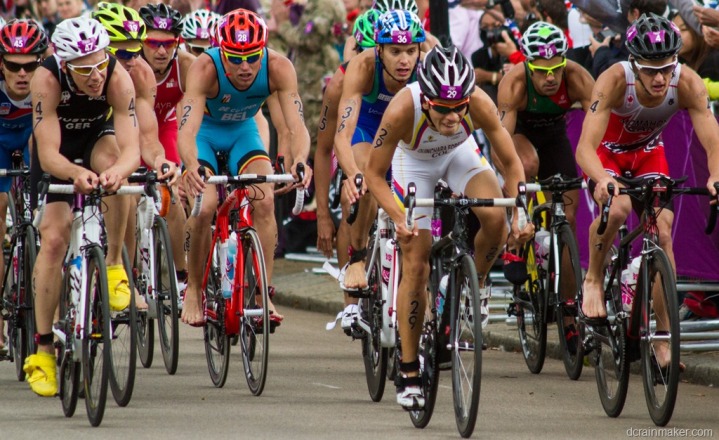 By time the chase pack had finished up in transition we were just getting our first glimpse of the leaders across the pond from us.  This is a heck of a ways away, and shot through a lot of heads, high rise hairdo’s and waving British flags:

Each of the four loops around the pond was 2.5KM, and with an initial pace at 4:40/mile – it took less time than a typical commercial break for the leaders to be back on our side of the pond from our sighting a couple minutes prior.  Here you can see towards the end of the first loop with the two Brownlee brothers as well as Javier Gomez (Spain), with the first chase group in the background.  This would be the last time the chase group would be anywhere near this close to the leaders. 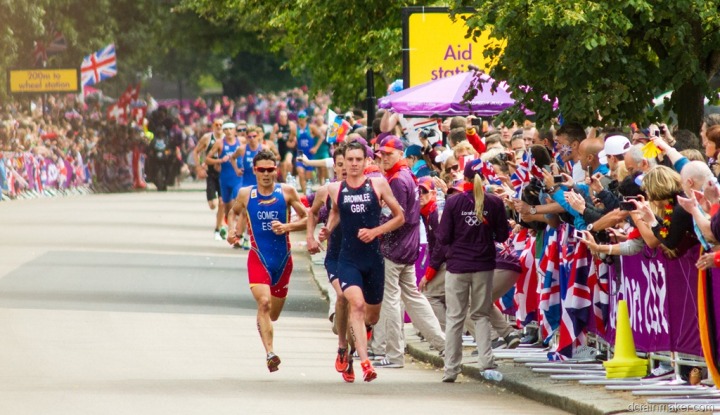 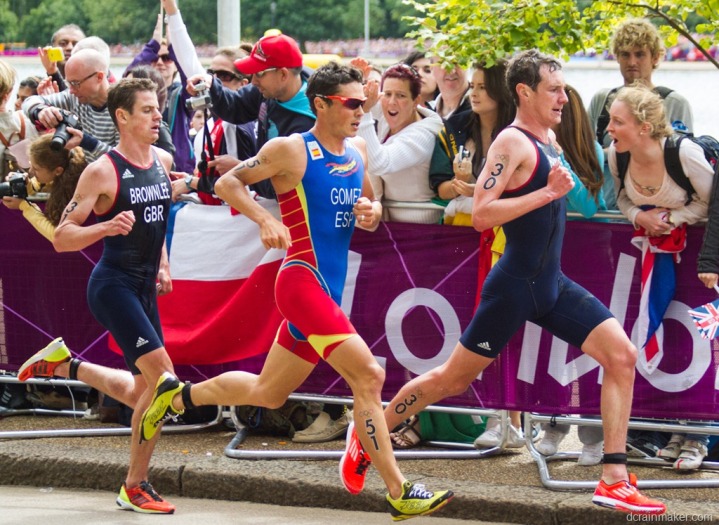 One particular aspect that made the race so exciting was actually Jonathan Brownlee’s penalty that he received at the bike mount line (for mounting too early).  This would cost him a 15-second stand-down penalty that he would need to serve on the run at the time of his choosing within the designated penalty box near the transition area.  Given we didn’t know when he’d select to serve it – it only further added to the suspense about how the race would end – primarily the three podium positions. 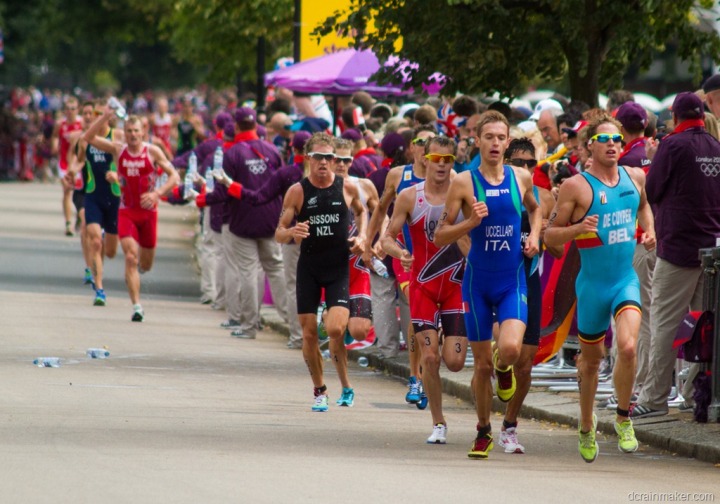 After two laps – it was still the same up in the lead – with all three going at it neck and neck. 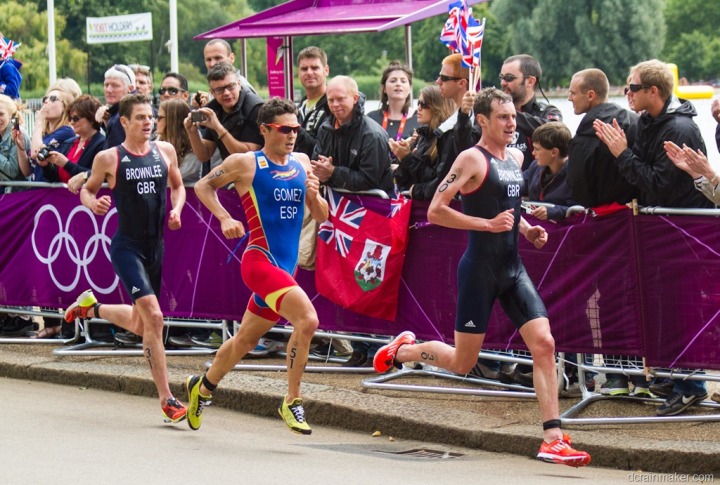 Meanwhile, the main chase pack had largely fractured, leaving a string of followers.  This Olympics served to highlight the end of careers for a number of Olympians that have been featured in Olympic triathlons for years.  For example, American Hunter Kemper below: 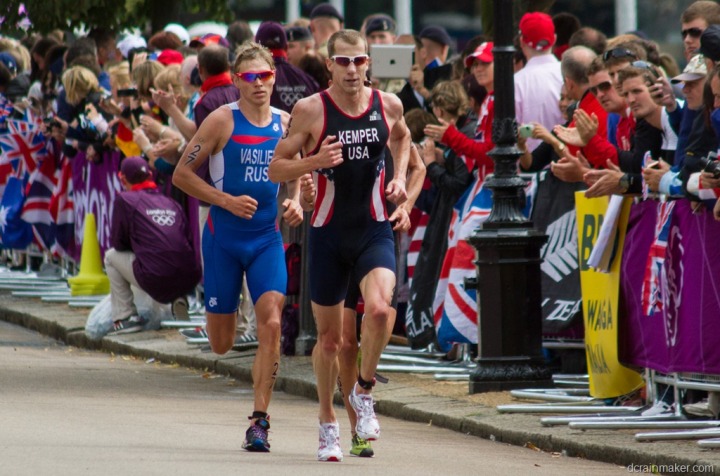 It was cool seeing the Olympic rings that were painted on virtually every athlete – just above their race number.  Seen below, Hunter Allen’s rings:

Finally, onto the last lap.  With Jonathan Brownlee choosing to serve his penalty between the 3rd and 4th lap, it put him further down on Gomez – who had already started to develop a 10-15 second lead on Jonathan.  Meanwhile, Alistair Brownlee continued to build his lead on Gomez.  He can be seen here at about 400 meters from the finish:

Of course, he was continually checking to see where Gomez stood – though the lead was pretty significant given the distance left.

Here’s a short video I shot showing what it looked (and more importantly SOUNDED) like as Jonathan passes by my position – headed for his bronze medal just over 200 meters away – surrounded by thousands of screaming British fans.  If nothing else – remember this: You’re not watching a football game or other normally wildly popular event – you’re watching a triathlon.  Yet, it could easily be mistaken for a major stadium somewhere.

Ultimately his brother, Alistair Brownlee would run a mind-blowing 29:07 10K for the gold, pretty damn impressive.

With the race complete – our view was as well, as the finish area was just one too many trees away.  Of course, everything about the race from a spectator standpoint was awesome – so no complaints here.

Hope everyone enjoyed the photos – and thanks for reading!