A Weekend Peaking in Transition

This weekend was the last push before the first triathlon race of the year occurring next weekend.  Since next weekend’s race isn’t an ‘A’ race, the goal is focused more on a steady build to Boise 70.3, exactly 8 weeks away.

As a result Saturday morning started off with a pretty big workout.  First up was 54 miles on the bike, including the last 30 minutes of which being a time-trial across 10 miles of fairly rolling terrain. 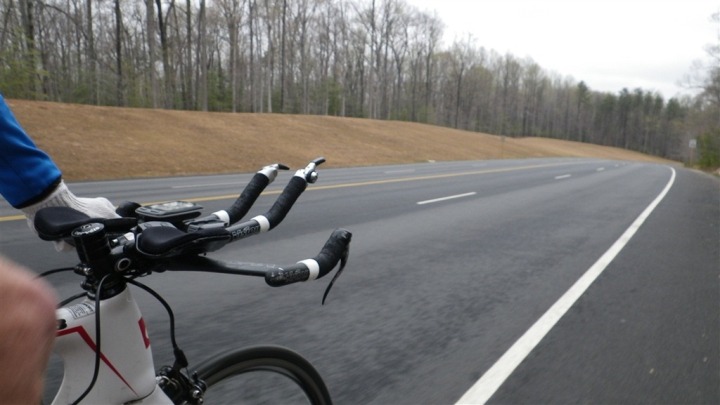 Post-bike I got the pleasure of a 30 minute brick run, building in intensity as the run progressed.  By that time though, my body was pretty much in ‘WTF?’ mode – clearly unhappy about the longest workout to date this year.  So while the run certainly wasn’t pretty, it did the job to cap off the brick.

The remainder of Saturday was spent getting prepared for the week ahead and doing random chores around the house.  With The Girl’s parents in town, we also cooked up some great steaks on the grill this weekend too…but I’m lacking in photos from that extravaganza.  Doh!

Sunday morning brought around some pool time.  All in a bit over 3,000 yards in increasing effort and decreasing distance sets starting with 1,200y. 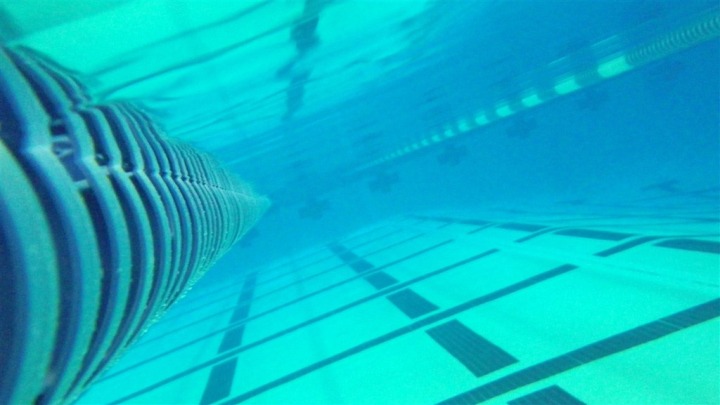 I’ve been spending a lot of time over the last month completely redoing my stroke.  It’s much improved in certain areas, but still lacking a lot in others.  I can make it look pretty descent with paddles – but keeping everything tied together when I remove the paddles is a slow going (but improving) effort.

After the pool and a few hours shopping, it was back to training related efforts.  With the race this weekend, Coach reminded us (via our schedule) that it would be an ideal time to practice our transition area tasks.  The majority of this task centers around mounting and dismounting the bike.

I’ve talked at length about this area before, so I won’t double-up on the details again.  Instead, I’ll just give ya the links:

With those details in mind, we spent about 30 minutes doing loops around the parking lot.  We divided it up into a fake swim run (T1), then onto the bike for a long loop, before transitioning (T2) to the run for a short loop. 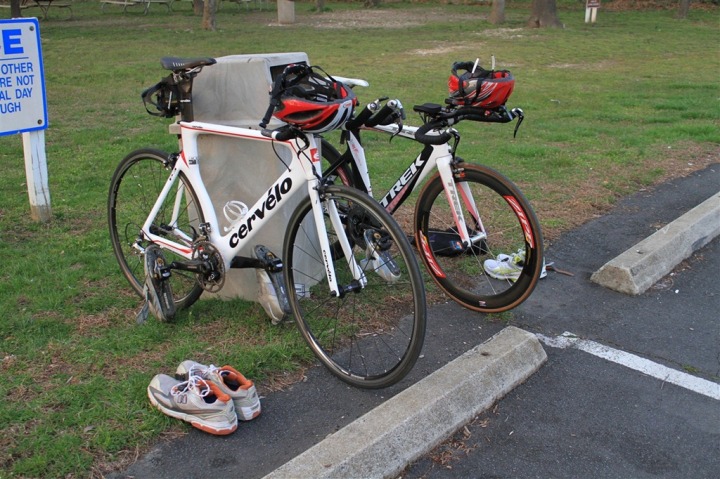 And as usual, we chalked out a mount and dismount (crash) line: 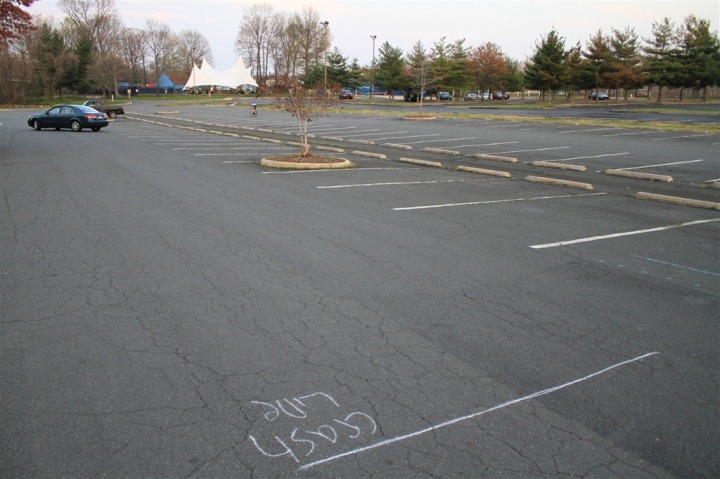 And then from there, we just got to it: 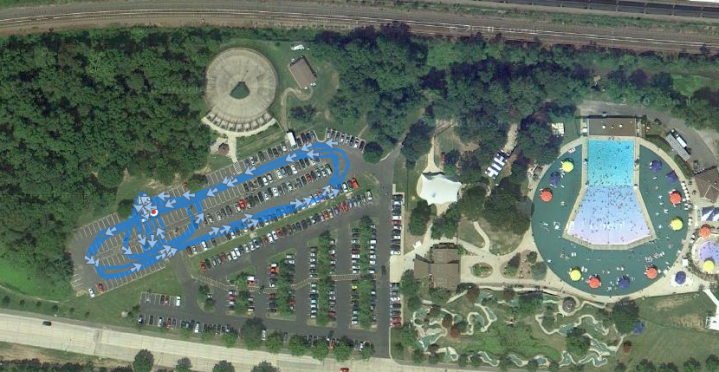 Regrettably we could not incorporate the massive wave pool next door into the routine.  Can you imagine how awesome that would be if we could?  Talk about winning…

Speaking of winning – I’ve gotta hand it to my fiercely competitive fiancée in her efforts to master the art of the flying mount.  While my mount is functional, I also take a less risky approach by placing my foot on the pedal and pushing off.  It takes an extra second or so, but less things can go wrong than the full out flying and jumping variation. 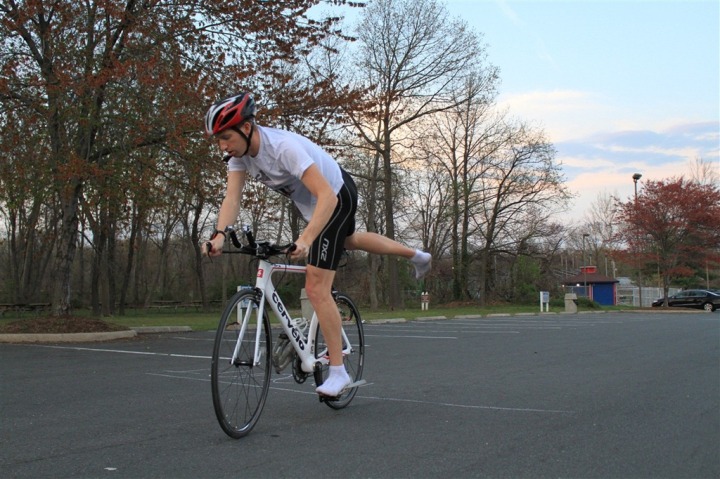 But just like the song “Anything you can do, I can do better!” (and sang in the same cute kid-like voice) she went out there and outdid me.  Pictures say it all: 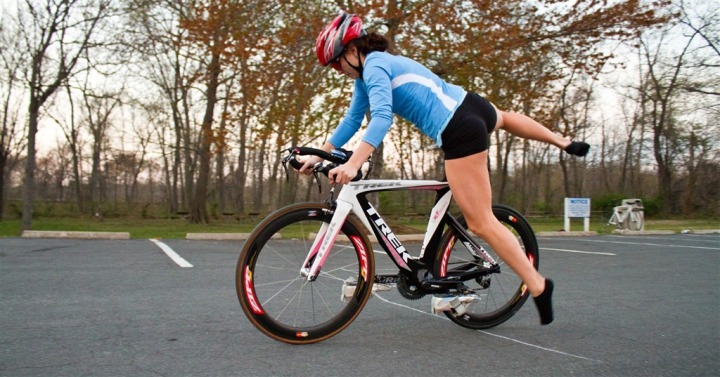 Note both above and below that she is fully in the air at the exact point her wheel starts to cross the line, all while running.  Below, the only thing touching the bike are her hands. 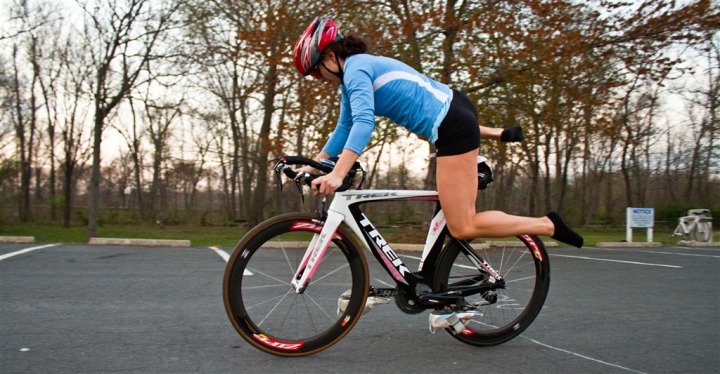 Yet…all this coming from someone who still prefers not to take her hands off the handlebars for any task while riding.  Impressive, ehh?

Of course, you can hear the whole experience directly from her mouth instead…it’s actually far more entertaining that way.  Plus, her post includes bunnies.  Mine does not.

Now I was actually going to record the whole thing using the Go-Pro HD with the ‘Chesty’ mount system that I picked up a week ago (btw, I really hate that picture they used on their packaging…not sure why, just do).  Except, I regretted one minor detail: 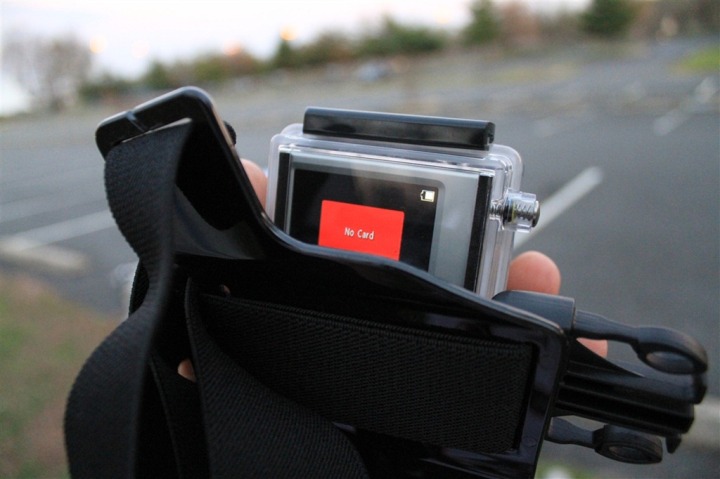 Doh!  Well, maybe for another transition training later this week I’ll remember the SD card and be able to record it all from my perspective.

In the meantime, I sit here at Dulles Airport waiting in a desolate gate area for my now delayed and almost cancelled flight for a short trip to Charlotte.  It would have been about 15 hours, but now it’s looking closer to 12h…if at all. 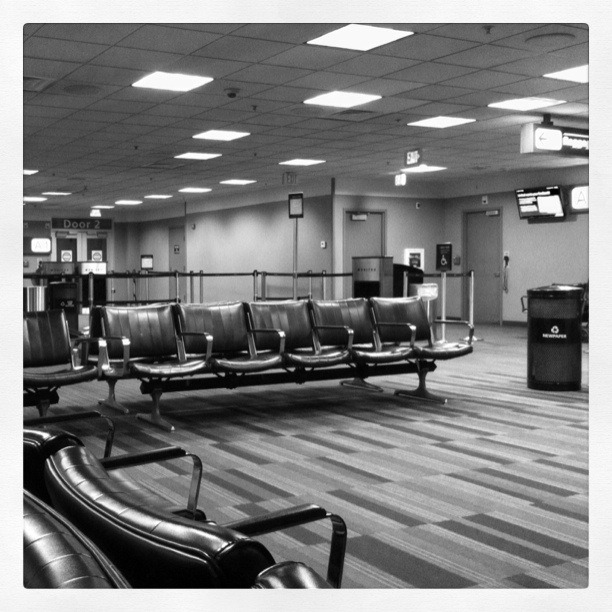 Have a great week all, and thanks for reading!