(Sorry for the delay in posting…the last five days since being in Botswana we were at a location that while promised internet…did not actually have fully functional internet…thus…no posts.  Let the posting resume!)

When I originally started looking at places in Africa for my winter holiday, I wanted something a bit different than my past experiences in Kenya, Tanzania and South Africa.  But I also wanted a more ‘normal’ experience for The Girl, who hadn’t been to Africa at all.  Thus, we ended up starting with nearly a week in South Africa, before pairing it with Botswana.

Well, the area that we ultimately decided on is the Okavango River Delta, which is a enormous swath of the country that’s essentially a giant marsh.  You’ve probably seen the classic National Geographic type video or photos of elephants plodding neck-deep across the watery landscape.  It would offer an interesting contrast to South Africa, while not being too far away.

Of course, ‘far away’ is all relative.  Due to changing flight schedules, it would in the end take us over 5 hours to get there – first an hour’s drive to the capitol of Botswana – Gaborone – then a 2 hour prop flight north to Kasane, before finally a 90 minute small private plane flight south to a non-flooded grass strip in the middle of the delta (and then another hour drive across the watery landscape in a Jeep after that).  While the small plane may deter many – I found it an incredible aerial shooting platform for the region.

Here’s what much of it looked like – as far as you could see – without a single human element in view: 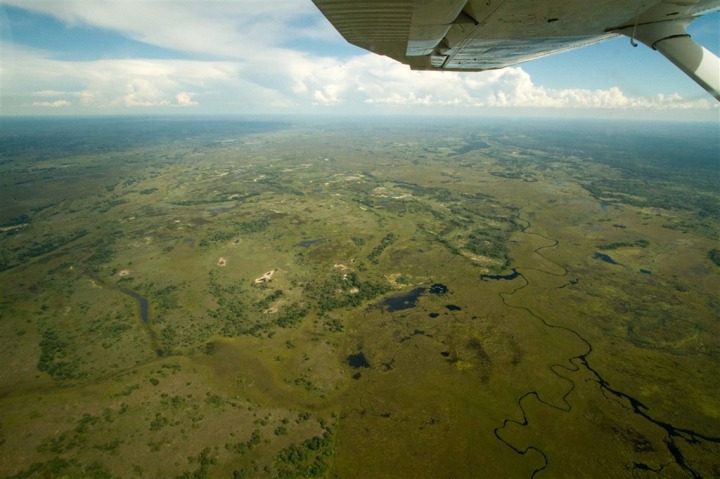 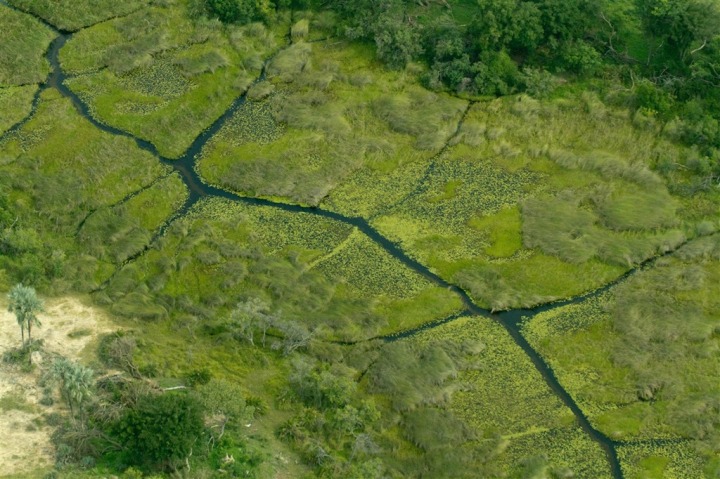 Of course, down below were endless herds of elephants, giraffes, and hippos. 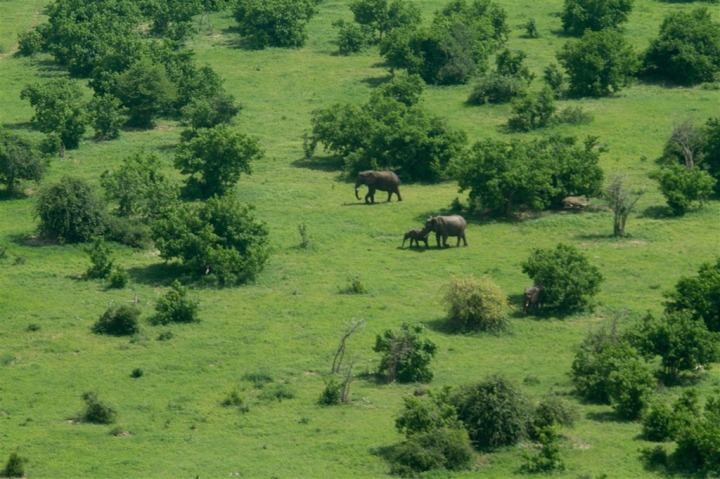 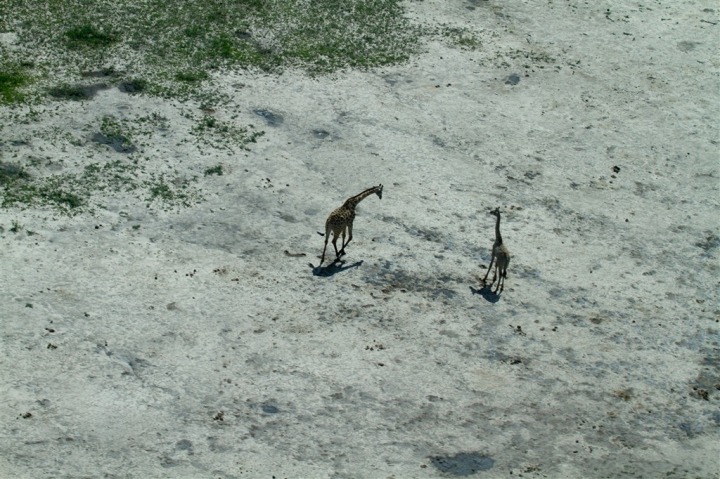 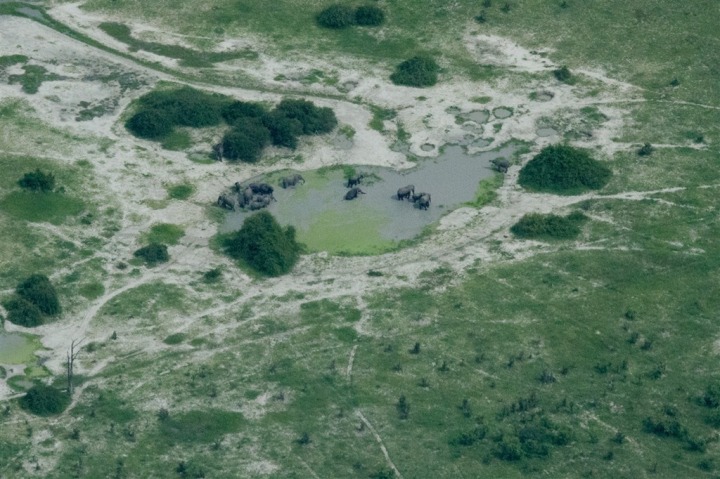 Upon arrival at the grass patch in the middle of nowhere, we were greeted by guides from &Beyond’s Xaranna Okavango River Delta Camp, for the hour’s drive across sometimes nonexistent tracks. 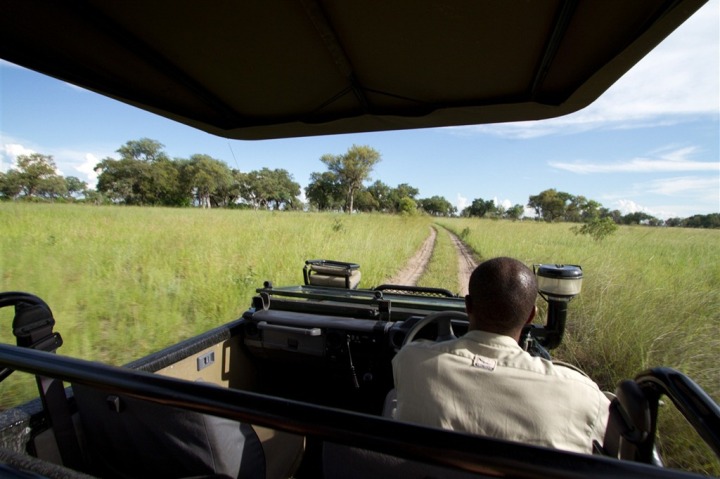 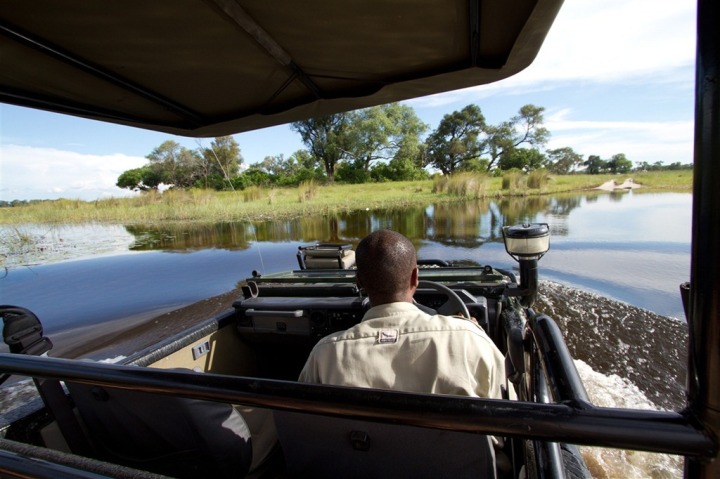 (No, the water crossing never got old – especially the deeper ones…always fun!)

But soon we arrived at the camp and were finally able to breath a sigh of relief. 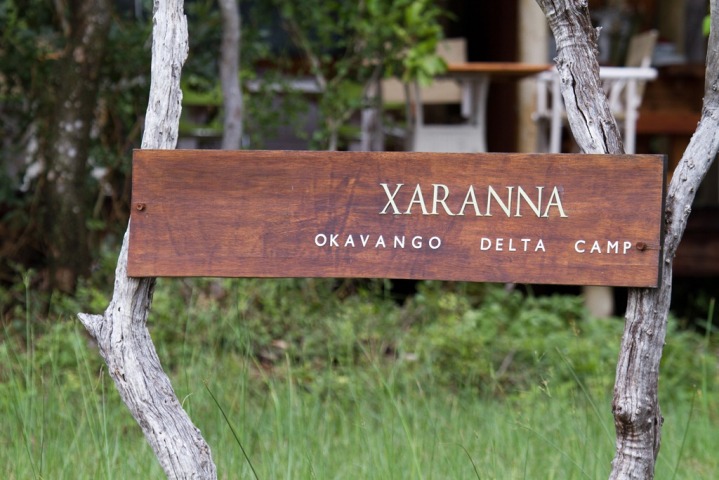 In the case of this lodge, the individual villas were a combination of canvas and structural elements.  For example, a night you’d clearly hear the rain tapping against the canvas.  And because the external walls were merely fabric – you’d easily hear the hippo’s commotion just outside in the river. 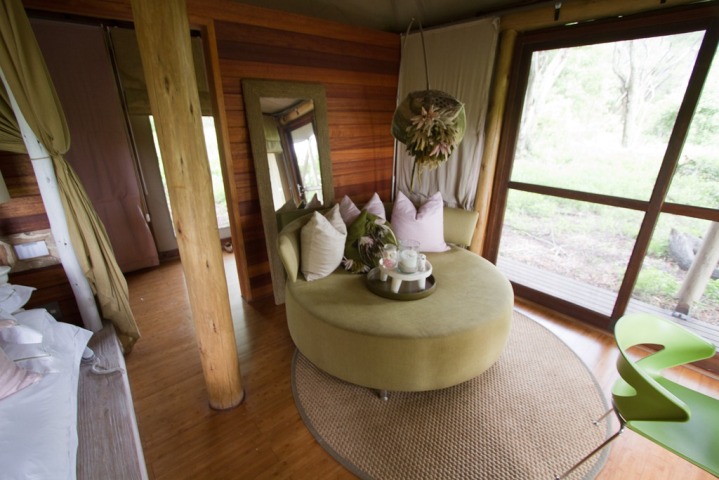 But…that didn’t mean it didn’t have all the amenities of a typical five-star resort…you know…like a private plunge pool…in the middle of the Okavango Delta. 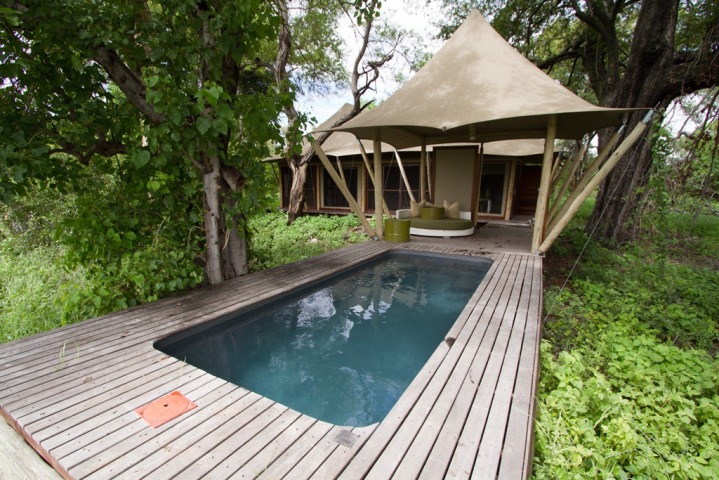 A funny story here actually.  On our last night, somehow the light didn’t turn off out near the pool – and when we awoke, it was filled – literally – with flying ants.  Rather impressive really. 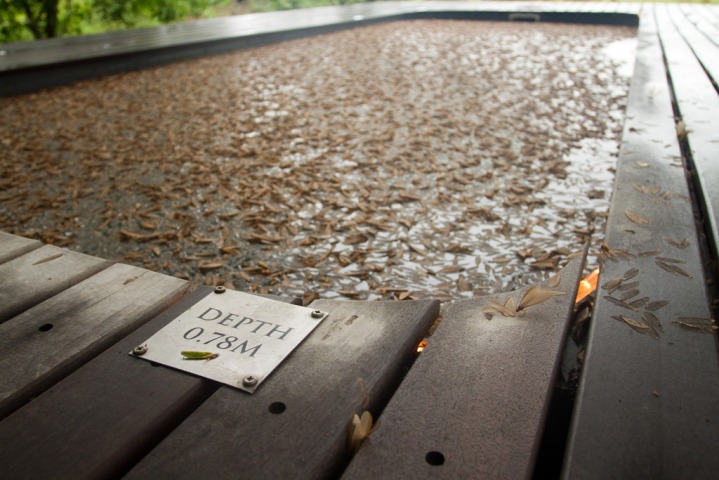 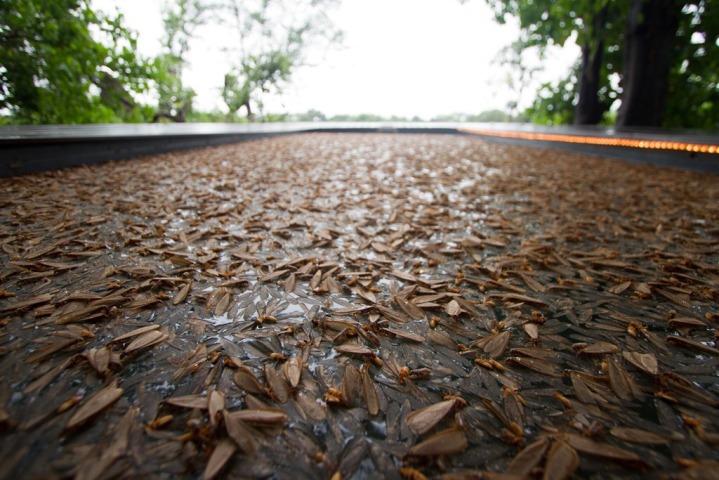 In fact, that night, every single light bulb you could find outdoors that had been left on had massive piles – literally a foot high in some cases – of flying ants trying to get to the light.

No worries though, within a few hours the camp’s staff had cleaned up the pool and it looked just like new again.  In fact, the original photo above was taken post-ants. 🙂

Of course, being we’re out here to see wildlife, we saw virtually all the biggies here.  For example, starting with two different lion’s just hanging out in the plains. 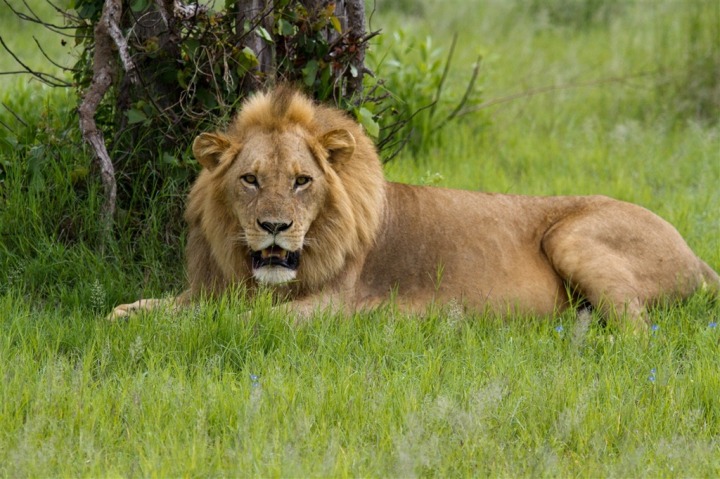 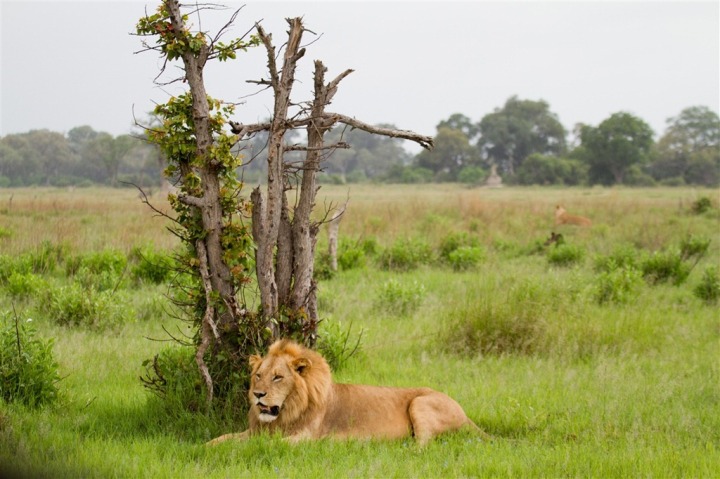 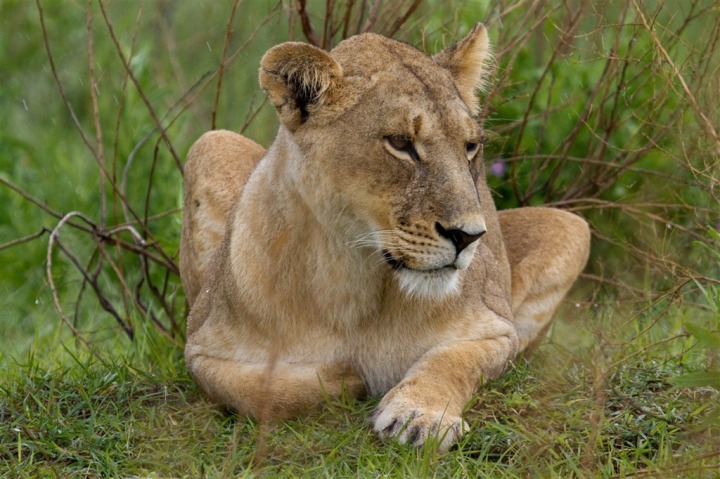 Unfortunately, we couldn’t quite find her cubs, which she hid nearby – as they were born recently and would have been cool to see.  Oh, and it’s hard to tell from the above photos…but it was dumping out, as you can see below in this photo from farther away: 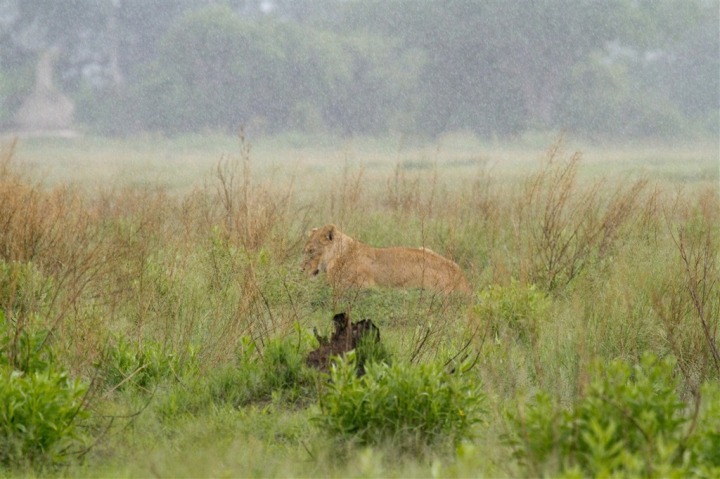 Shortly after the lion’s we were able to find a very well hidden leopard.  You know, some of the animals you literally find it open sight…but not usually cats like lions and leopards.  It was rather impressive to see the guides following footprints for a very long time, to finally be able to find him hidden in a bush at the base of a tree. 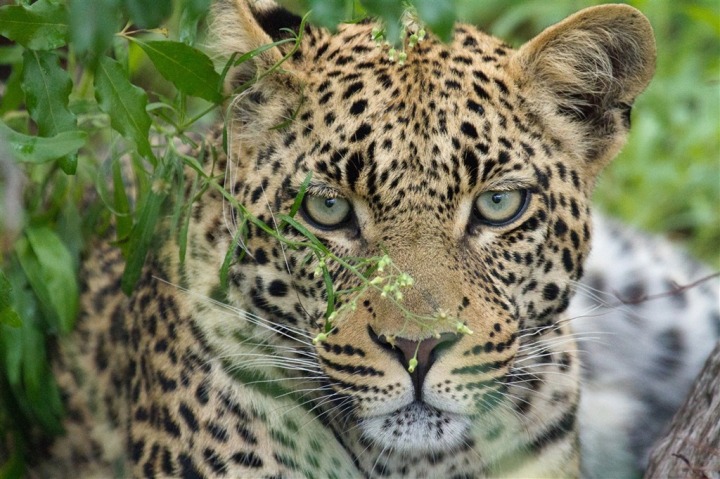 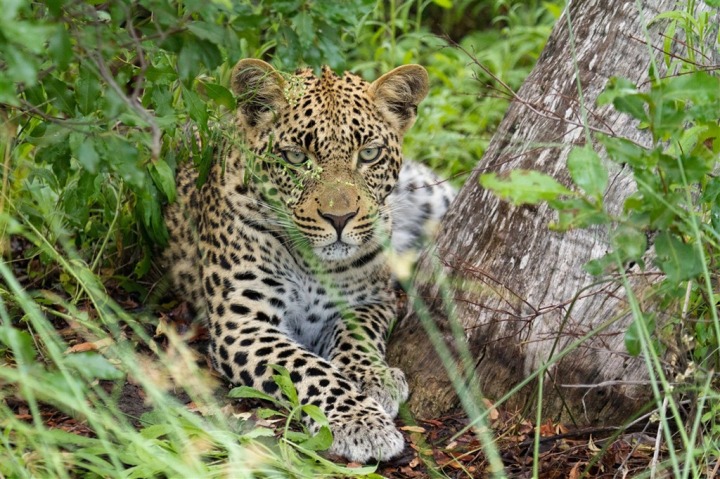 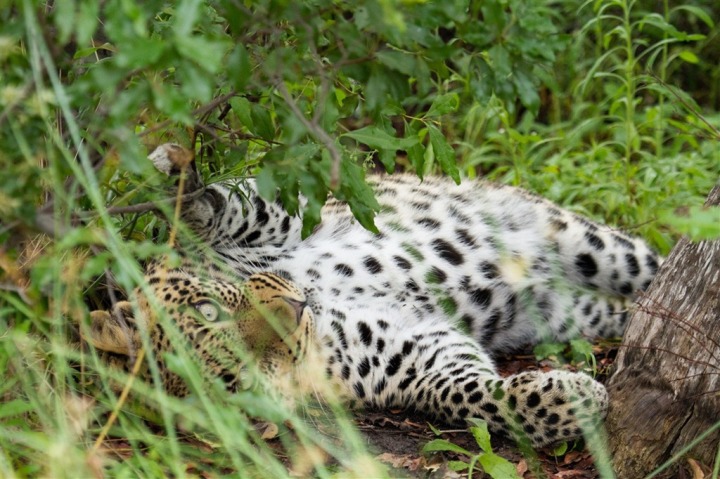 While we did a lot of driving over a dozen hours worth – without seeing anyone beyond only one other vehicle…from our own camp.  Very cool.

Oh, and did I mention yet how awesome all the water crossing were? 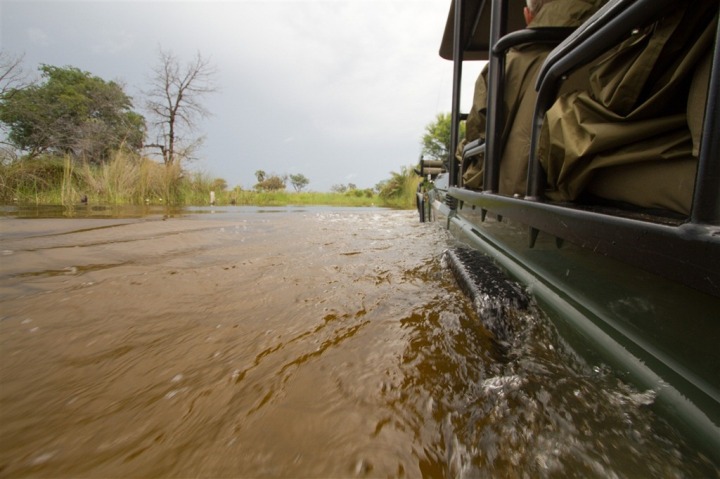 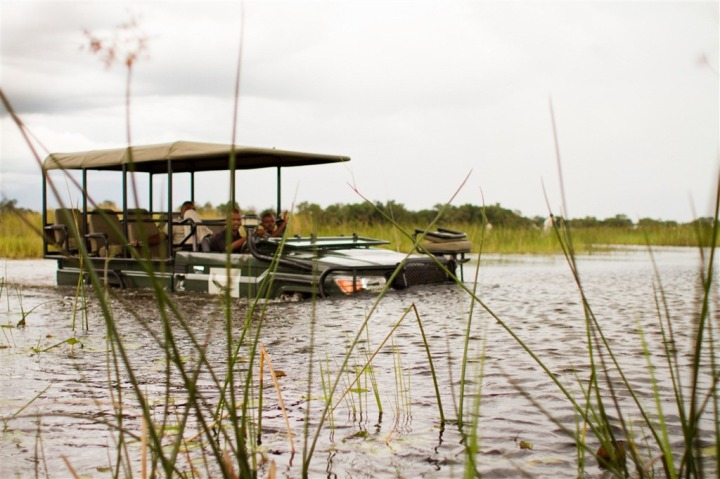 Or the stuff at night – also lots of fun. 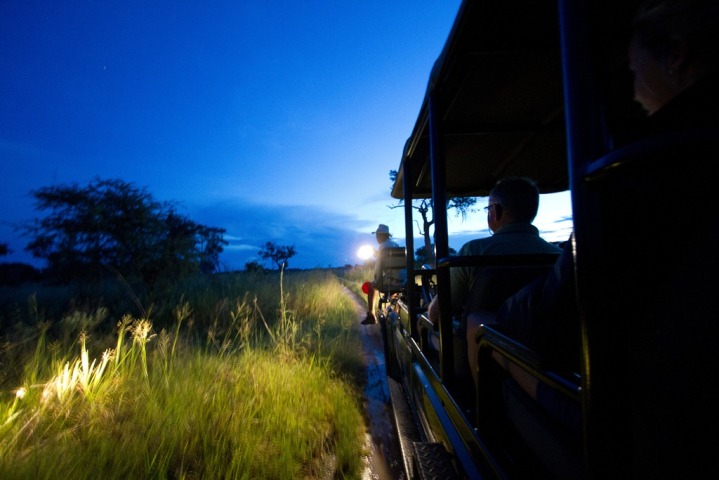 Perhaps one of the coolest thing about the lodge though was being right next to the hippo’s, which hung out directly in front of the camp.  In other seasons, the area that you see in the photo below would actually be completely covered in water – making all ‘drives’ done via boat, instead of vehicle. 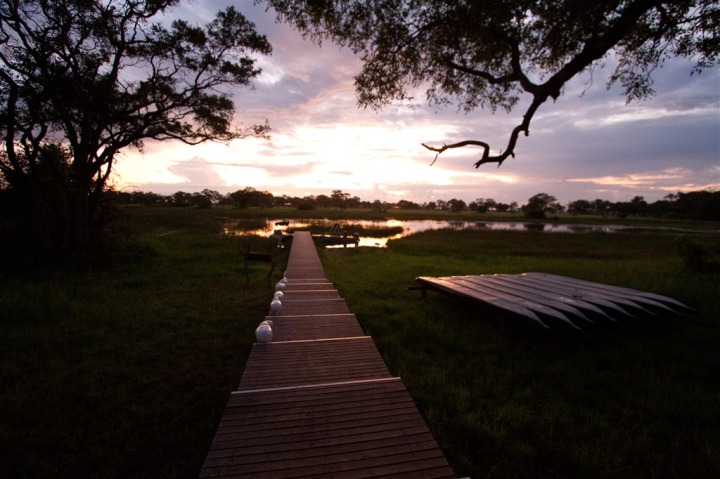 We did get to take out one of the canoe-like boats, and go for a spin.  It was great to have an eye level view with the hippo’s. 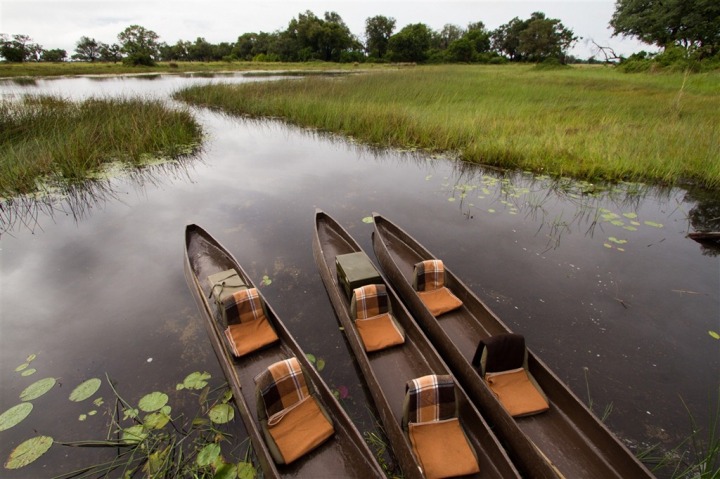 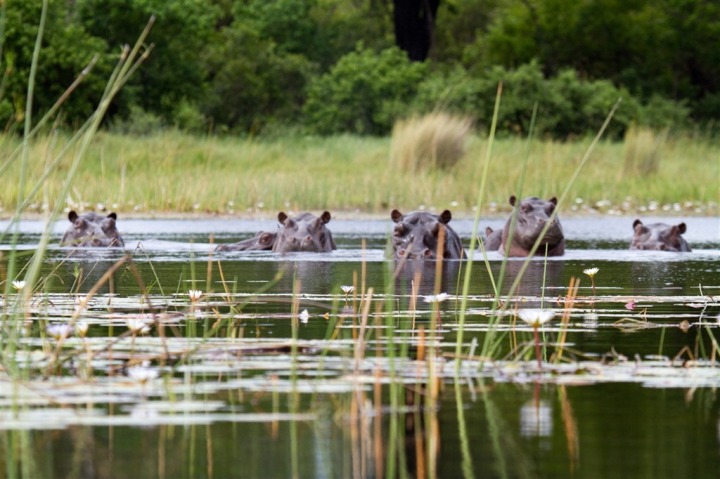 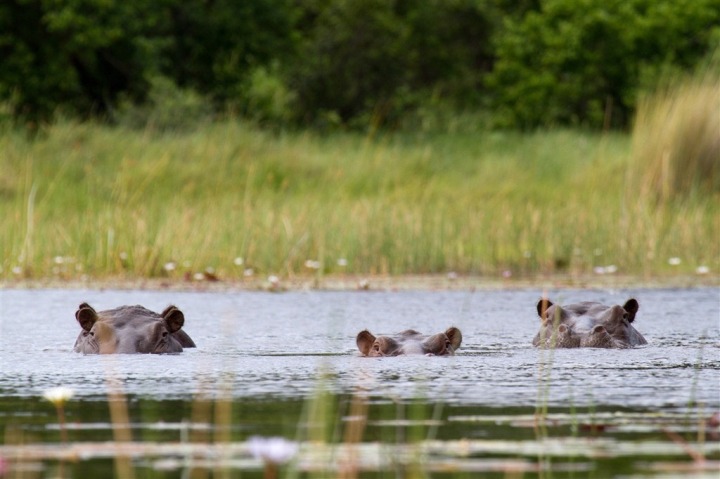 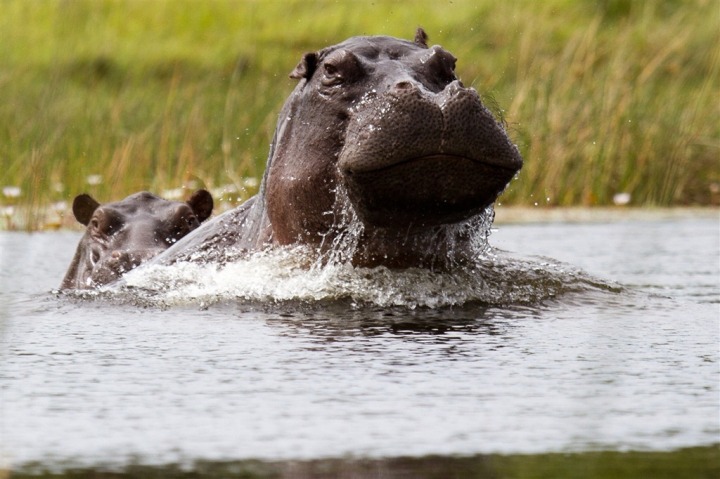 We had to head back a bit early though, due to the thunderstorms closing in on us a bit quicker than we wanted. 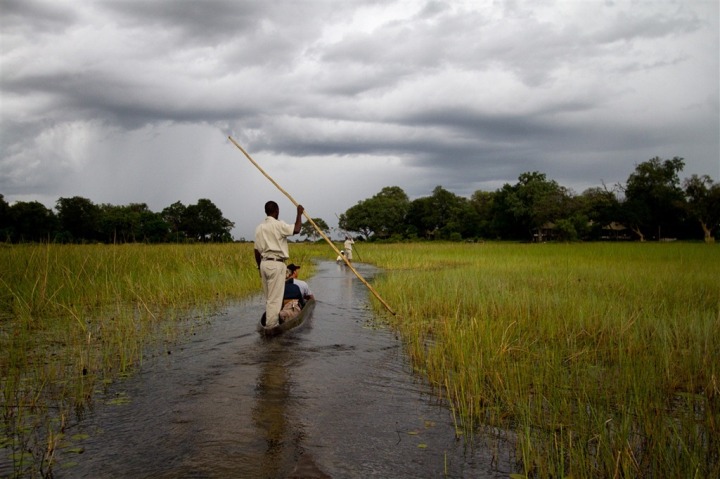 No worries though, we were able to enjoy the rest of the afternoon just lounging around. 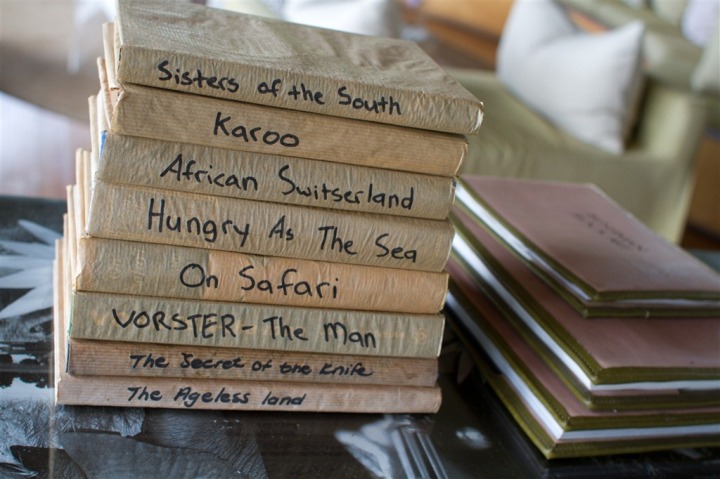 (Note: For the photo-peeps amongst ya, all of these were shot with a Canon 7D, and the vast majority were using a 100-400L lens that I rented for the trip.  I find that for specialty lenses like that, there’s very little point in owning them when renting them for a few weeks is barely a fraction of the cost.  All the rest of the photography details are here.)