One of the items that makes a cycling power meter so useful as a training tool is it allows you to make objective statements about how your training is going – regardless of how things like weather or terrain may twist your weekly workouts.

But first, let’s look at running as an example to understand what I’m talking about.  Saturday I had my usual tempo/interval run thing.  It essentially consists of a 15 minute building warm-up set, and then straight into three sets of 9 minutes each at a Z4B pace – not quite all out, but pushing it a bit – a steady hard effort.  Each set has a couple minutes of easy jogging in between.  While I can see very clear and steady improvement over the past two months, it’s often hard to determine exactly how much I’m improving – even on the same routes.  In my case, that’s because of the impact of weather (snow and wind as of late).

For example, on Saturday the wannabe-hurricane winds slaughtered me in certain directions – but assisted me in others.  So, my set times were a bit all over the place on the three core interval sets (with checkboxes, Lap 3/5/7): 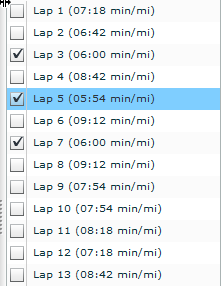 Now, if I were to try and compare them to the previous few iterations of doing this workout – I’d also have to figure out how to account for the snow on one set, terrain on another, and wind on this one.  Four very different runs.  Yes there’s a general improving trend across the areas I’m most interested in, but determining exactly how much is difficult because the conditions have differed so much each time:

(Click to enlarge – Each frame from Training Peaks, I just combined them all together using MSPaint, would be great if TP had the ability to easily compare workouts for me…hint hint.)

At least in swimming I can see improvement since the pool doesn’t usually have windy conditions indoors (Note, that isn’t my 500y time, it’s just by time I got around to getting the camera out, unfortunately you can’t just simply ‘stop’ the timer on this watch…very frustrating). 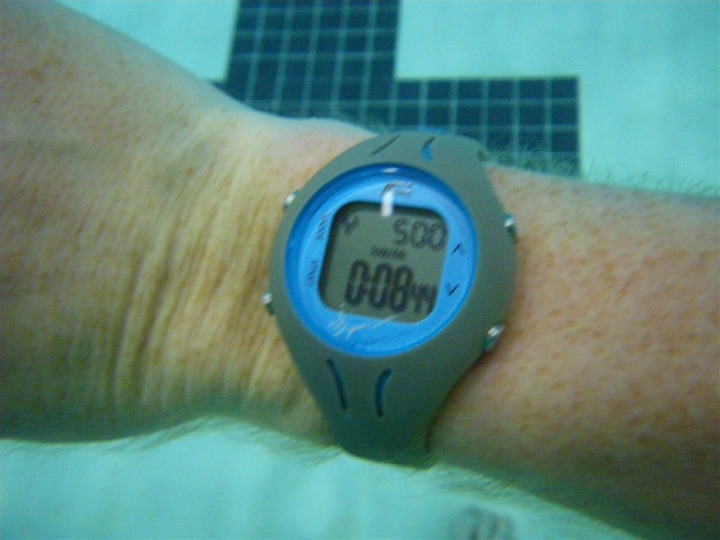 Though, this Saturday’s swim (a few hours prior to the run above) was all about technique and drills.  4,200 yards of it to be exact – so not too much for comparison there week over week.  In fact, in this Saturday’s case, had I been pushing it, it would have defeated the purpose of what I was doing (focusing on technique). 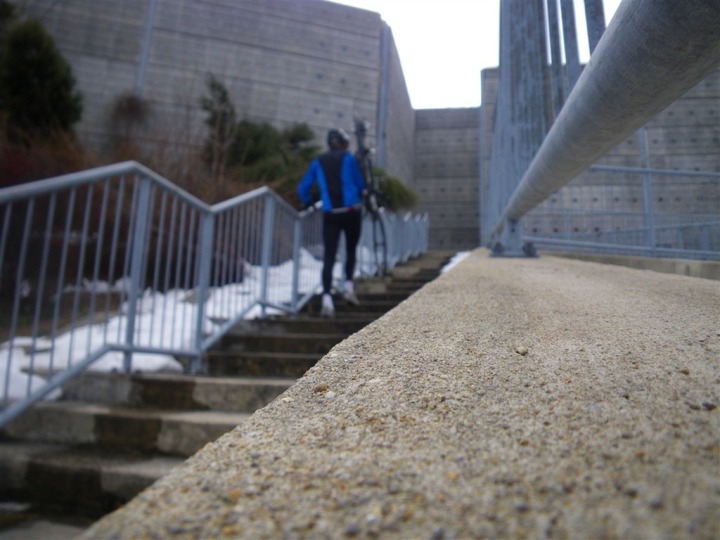 (Today – Sunday – some of the pass-throughs were covered in snow and ice still, so I had to hike-a-bike up them)

Let’s look at cycling, by going back to the power meter thing I started off with.  In this case the power meter measures my output – in watts – which means that it doesn’t matter if I’m on the flats or into the wind – it’s all normalized.  Normalization is simply taking the phrase ‘Comparing Apples and Oranges’ and making them all Apple-Orange Juice.  Or something like that.

For example, today (Sunday) I went out for a 45-ish mile ride.  The wind pummeled me many times.  In some cases, I was going 12-13MPH into the wind.  But because my power output was constant – so I was able to validate that despite my slow forward progress, I was still hitting the HR and power zones that I wanted.  You may remember me using this in some races this fall – such as the Iron Distance Aquavelo – to help pace into the wind.

Now, let’s take that concept and spread it across the last 6-8 weeks worth of serious bike training(anything in December wasn’t really truly serious, it was off-season).  In my case, I have the same basic structured workouts each week.  Essentially four trainer rides (one of which – the long ride – I can opt to do outdoors).  Each week on Monday for example I have IT1 (Indoor Trainer #1), IT2 on Wednesday and so on.  Each of those IT’s have a specific structure that’s the same, just slightly building the number of repetitions depending on the week.  This means that I can compare this Wednesday to last Wednesday and see specific power improvements.

I do one to note one really important item – all of these wattages are for a specific set heart rate zone.  Meaning, that this isn’t just a case of ‘let’s see if I can beat last week’s numbers’.  Nope, I have a limiter set by Coach Alan on heart rates – so it has to remain within that range in order to be ‘legit’.

For example, let’s look at this past Wednesday, to a January Wednesday: 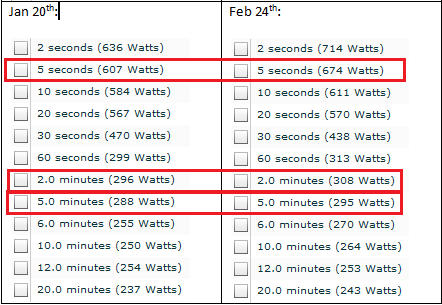 They key areas I’m looking at are max wattages for certain time periods.  Now note that because I’m on a CompuTrainer I pretty much control the wattages – so this isn’t an outdoor free-for-all where I could get some really big terrain/car/bus/light/whatever-induced spikes, like today’s ride:

(You can see the larger power fluctuations of being outdoors – simple stuff really – like waiting at a red light for it to change green, and then really pushing it across the intersection to not get run over – compare that to below, for being indoors during a typical IT) 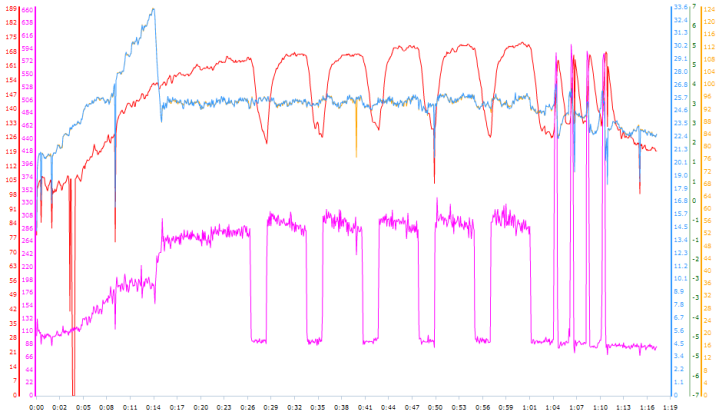 Now we take that same set of key values I’m looking at (particularly 10s, 3m, and 5m sets) and plot it over the last 8 weeks for that given IT2: 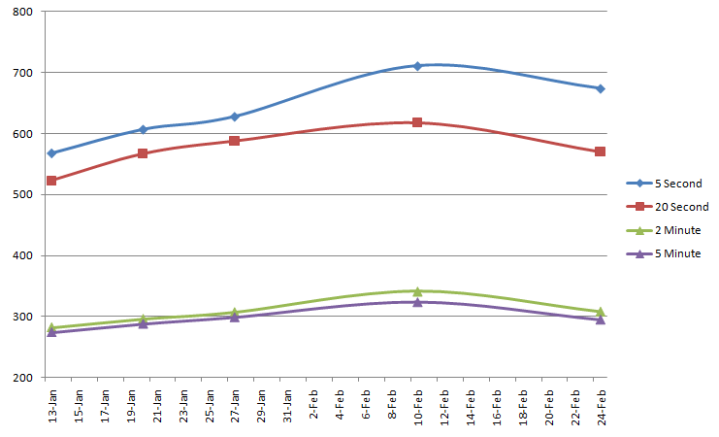 Now why the drop-off this past week you might ask?  Well, two things I suspect – one is the week previous I was in Vancouver and didn’t get any bike rides in, so I lose some strength there – just the reality of the situation.  But probably more important is that I was sick coming out of Vancouver – I’ve previously noted how much of an impact that can make.

Finally, as for the bottles in the post title – I managed to somehow lose a screw on the bottom cage, likely due to the extreme rattling from the rough roads and potholes post-blizzard from the plows.

Adding to the suck-factor was that somehow my standard bike tool wasn’t in my bag – so I couldn’t remove the cage and carry-on.  I was super-concerned it would swing out and catch in my shoe or crank – causing a fall (and thus a fail).  I tried to snap it off, but it just bent.  So I ended up bending it into a little egg-shaped thing to keep it out of the way for the rest of the ride. 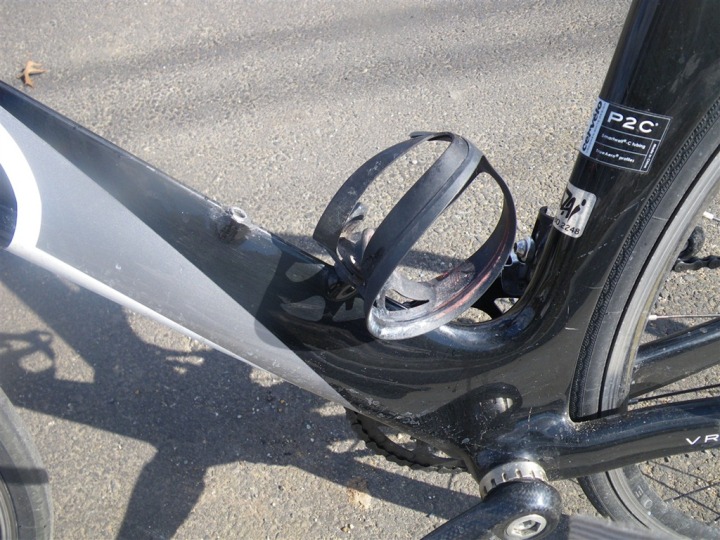 Then, just a few minutes later as I was storing my bottle into one of my rear cages – I managed to fully snap off the entire cage.  No idea how.  So I just stuck it between my aerobars for the last few minutes of the ride. 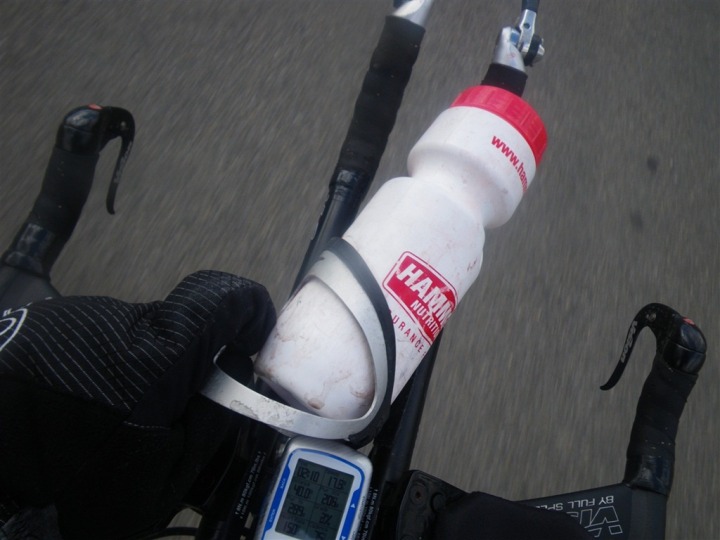 With the cages being something like $20 a piece, that’s dang expensive to be out two of them.  I have a Love/Hate relationship with the TACX cages.  I love that I’ve *NEVER* had a bottle pop-out of the cage.  I hate that I’ve managed to have snapped off half-a dozen of them…in training and races.  Big races. If you have any recommendations for cages that don’t cause bottle pops (I don’t want to deal with little straps or anything), I’m all ears!

Oh – one little random tip for you from today’s ride.  If you have triathlon-targeted cycling shoes, you probably have a substantial hole on the bottom towards the front.  This is to keep airflow in the shoes and keep them from becoming all stank.  But, in the winter, this leads to frozen-toes (yes, I have booties too, but I hate them).  Simple solution for the winter – tape: 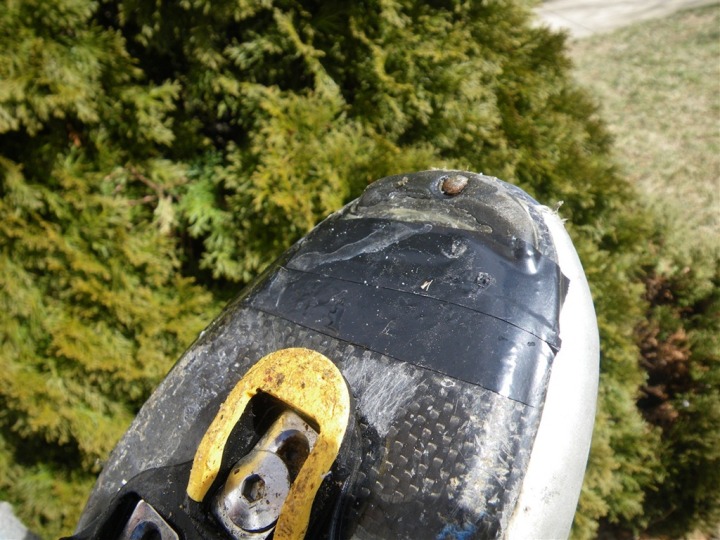 Anyway, I’m off to one of my favorite places on earth… 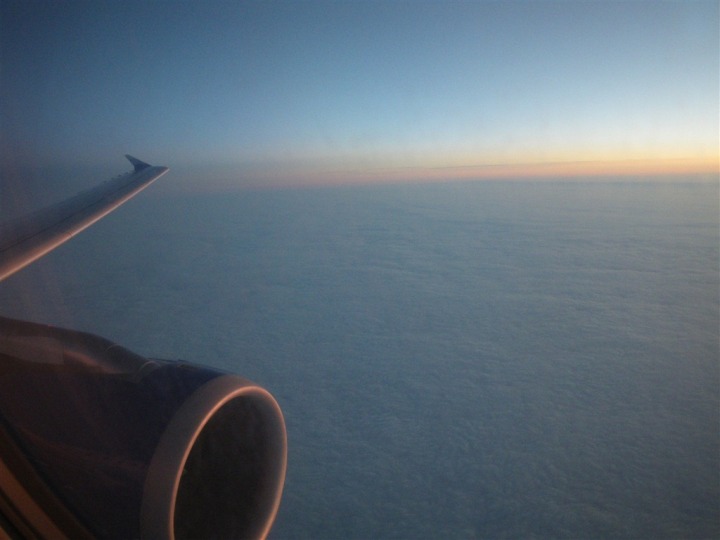