Since the weather first shifted towards snow on Saturday, I was pretty jazzed.  I like snow, lots of it.  And even though the Washington DC has no useful hills (Read: Nothing to ski down or chairs to ride back up), I still like the white stuff.

I spent Saturday morning waiting for the snow inside a big indoor track facility watching an indoor track meet.  Which was actually a lot of fun, more than I expected.  About half way through this endeavor the snowflakes finally started falling, and then it rolled into a pretty heavy snow dumping session.

Thus I was fairly excited to venture out into the snow and get my run on.  Coach had scheduled a track workout for The Girl, but with the track covered in snow – that seemed a bit more difficult.  So instead we decided to do it on the road with a pair of Yak Tracks.

Except…by time I drove from the indoor track (near the outdoor track) back to my little place, I found that I had dropped about 100-200 feet in elevation, and that snow wasn’t really sticking anymore.  Boo!  At least it was still trying…still snowing.

So, we went for the run anyways…without the Yak Tracks.  Here’s our Garmin’s getting ready for the run. 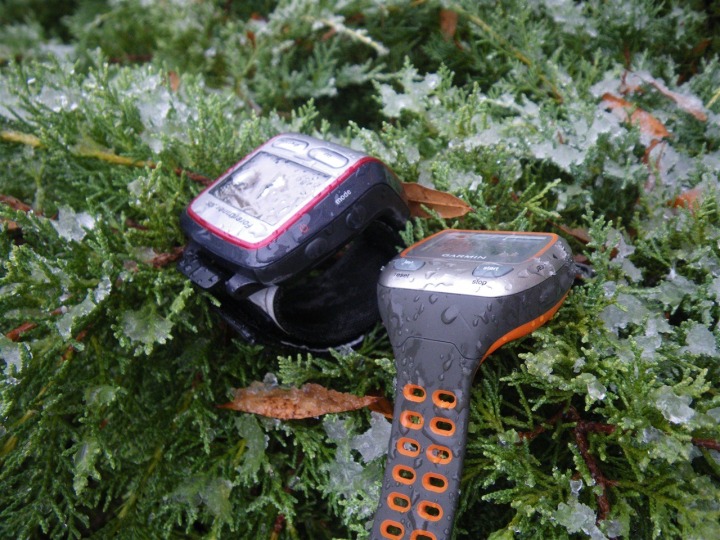 It was a nice 8-ish mile set of fast paced goodness in the continuous snow.  Dodging puddles and getting snowflakes in my eye.  Based on the below photo, it looks like the camera got a snowflake in its eye too. 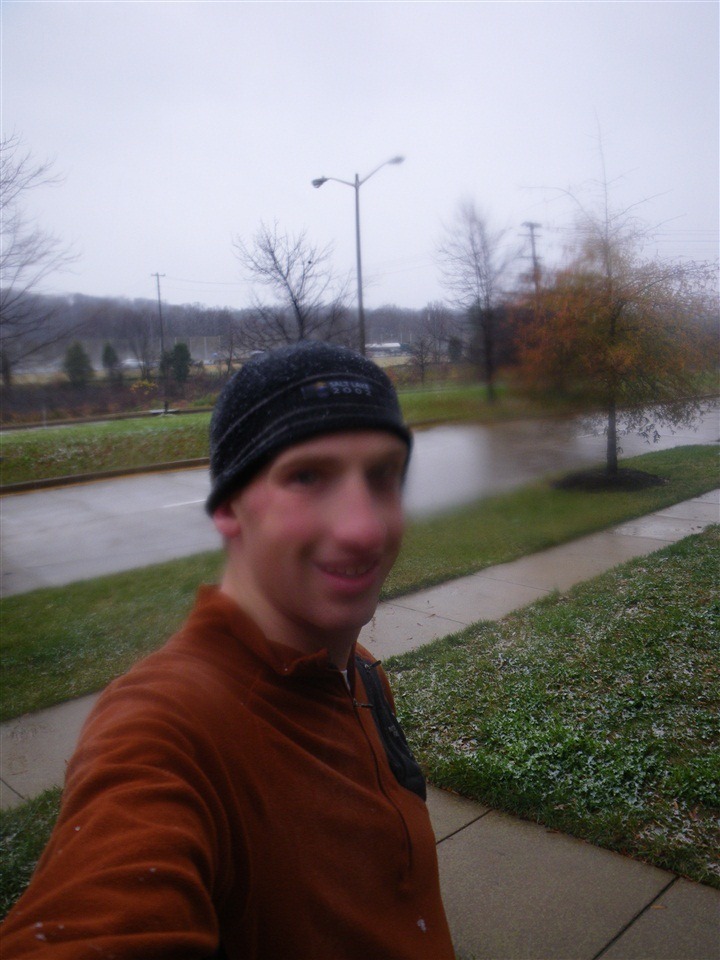 After that I didn’t really do much.  It had been a long day.  Eventually we hit up a local Italian place in Old Town based on the recommendations of some friends.  The food was pretty good, and fairly reasonable – so all sorts of goodness there.

Post-food, we watched food.  Well, Food Inc.  You may have seen little flyers/coupons for this movie if you’ve been to Chipotle recently.  It’s a film about the American food production business and how things are grown.  Think of it as a film like The Inconvenient Truth or Supersize-Me, but for food production.  Incredibly fascinating (and somewhat disheartening) stuff.  As of this past Thursday it’s available on Netflix Instant Watch, so if you have Netflix – you can watch it right this second.

Interestingly, the movie features an organic family owned farm just a hop away from where I often ride my bike on Skyline Drive, in Shenandoah Valley.  After looking at their site, I found that some of the places I enjoy actually buy from them – including Buzz – where I bought the cupcakes a few days ago, as well as Lavender Moon Cupcakery, where I usually buy cupcakes (when the Girl isn’t busy making them).  I’d HIGHLY recommend you check out the movie, either via Netflix or from your local Blockbuster.

We decided that December might be a fun time for the Girl to try her hand at mountain biking (this would be her first time).  If for no other reason that pure entertainment (on my part).  Though, I’m fairly certain Coach would not be entirely pleased with our biking choice (sorry Coach!, we won’t do it mid-season). 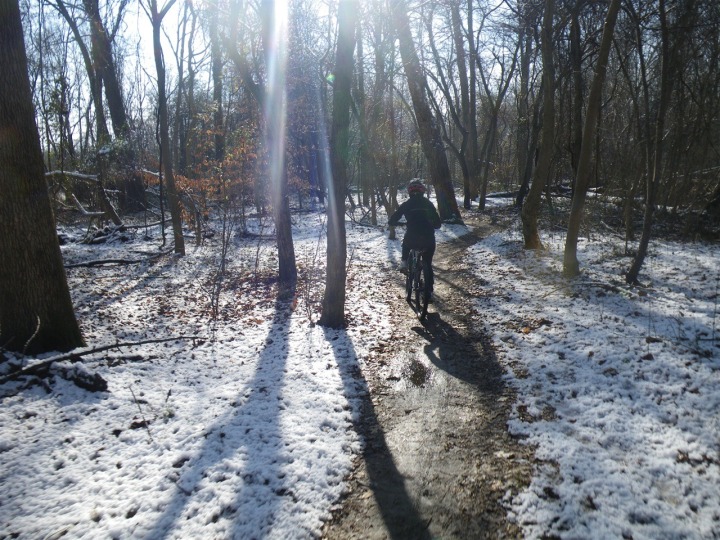 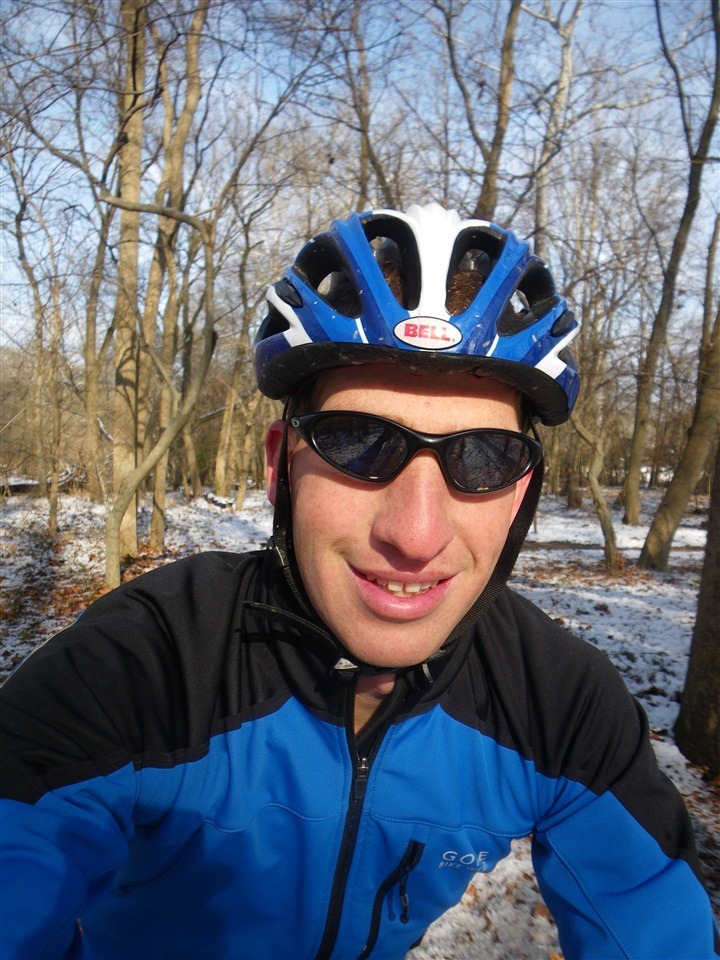 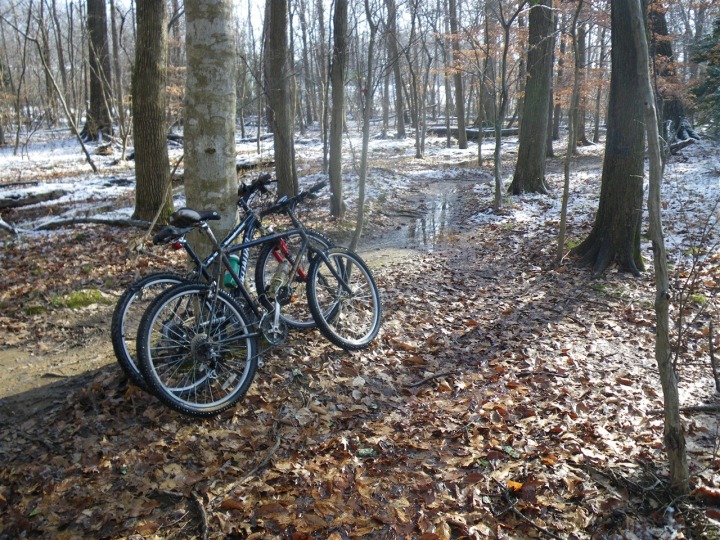 I played around with the Edge 500 some more, this time on my mountain bike.  It seemed like a fine (and fun) place to test out some of the functionality in a more bumpy environment.  For example, how would the rubber-band mount system work?  Or how might it hold up to mud? Or what about tree cover and the GPS signal? 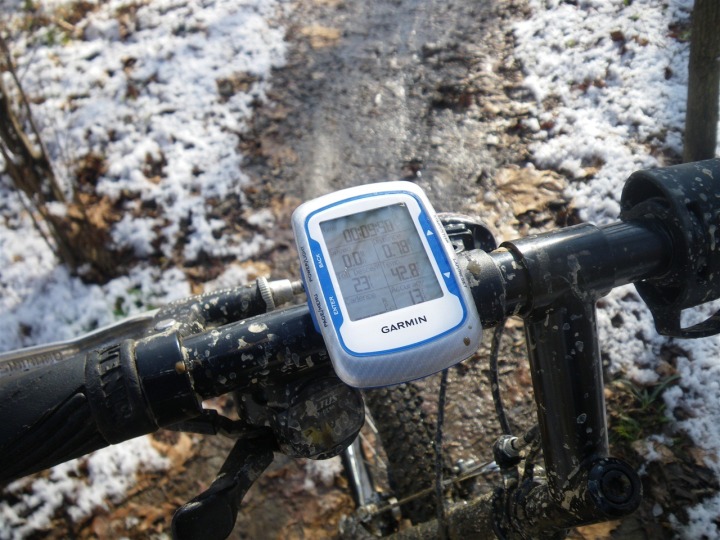 We also had a bit of fun again in the massive mud puddle that is in one area.  It was much bigger than last time, and this time the water was damn cold.  Given it was partially frozen when we first arrived.  On the 3rd or so loop we actually stopped and played around a few times, trying to successfully cross it.  Kinda like being kids again playing in the massive mud puddle.

Of course, the key to this puddle is pure speed.  And the first few times led to some failed attempts, either due to sliding on mud during the approach, or simply underestimating the amount of power required to push through the deep mud:

But, third time was the charm – for both of us.  The Girl however, was hilariously excited, check out this short video of her 3rd and final attempt (you may have to click to view the video).  Also do take note of her supplemental vrmmm engine sounds on the approach (may have to turn up speakers slightly) – the additional engine sounds are absolutely key to successful passage of the puddle:

It doesn’t get any better than that – either her excitement – or the simple fact I’ve got an awesome girlfriend that actually takes on the massive mud puddles as big as her multiple times…despite the fact that our toes were frozen.  And keep in mind – this was her first time mountain biking no less.  Pretty cool.

And at the end, we were both pretty well decorated in mud.  Very…very…very…cold mud. 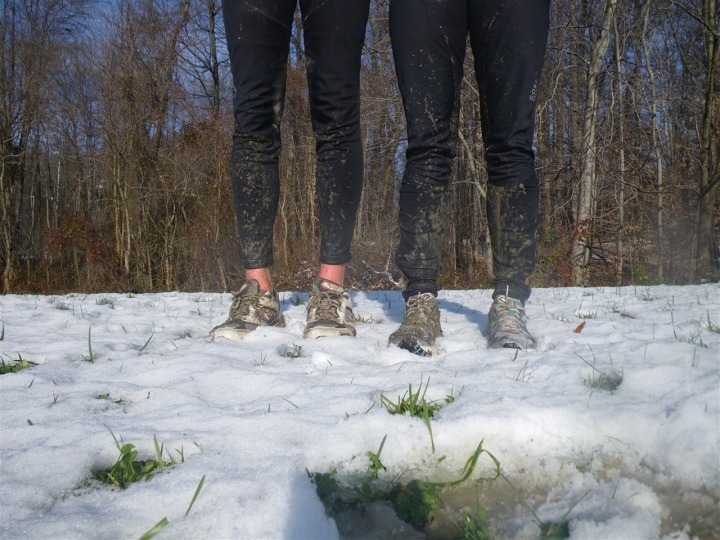 And with that…I’m on my way now to a solidly snowy place.  Though the weather forecast has changed slightly, some days for the better, but other days..not so much: 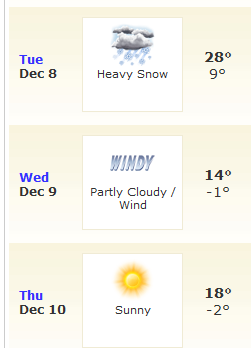 Catch ya in a bit…