But first…let’s rewind to last year.

Last December DC runner/blogger Peter was taunting me to show up at the monthly Tidal Basin 3K that’s been going on for some 35 years.  So I did.  And I threw down.  And I won.

Life got busy and the monthly race never quite fit into my training or travel schedule.  But December somehow is a bit of a quiet time, and I managed to secure a spot on today’s calendar to have enough time between meetings to jet out for a quick loop around the tidal basin.  I was feeling pretty good given last night’s Z2 run was sub-7.  Which meant that despite my lowered training volume over the past few weeks (ok…maybe 5 weeks), I hadn’t completely fallen off the rocker.

So off I headed across the river into the district. 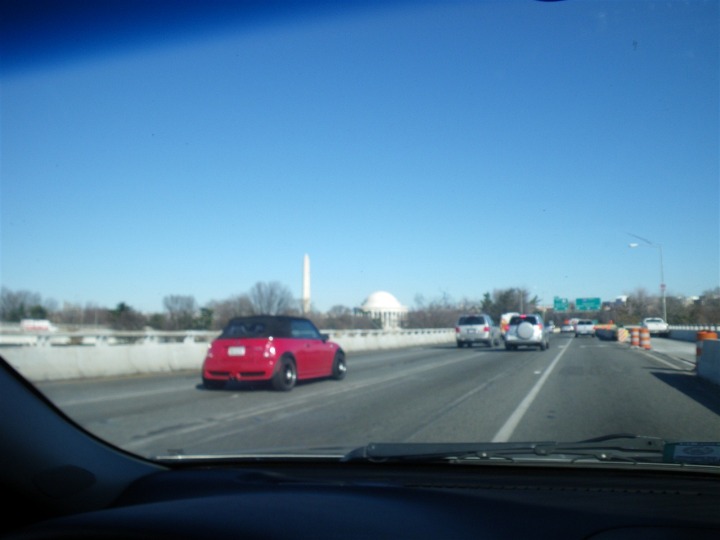 The race starts at 12:00PM sharp, and last year I was smart enough to arrive around 11ish so I could get a nice solid warm-up in before holding on for dear life.  This year however, schedules wouldn’t quite permit it…so i got there at 11:40AM – just in time to see the start of a small group forming. 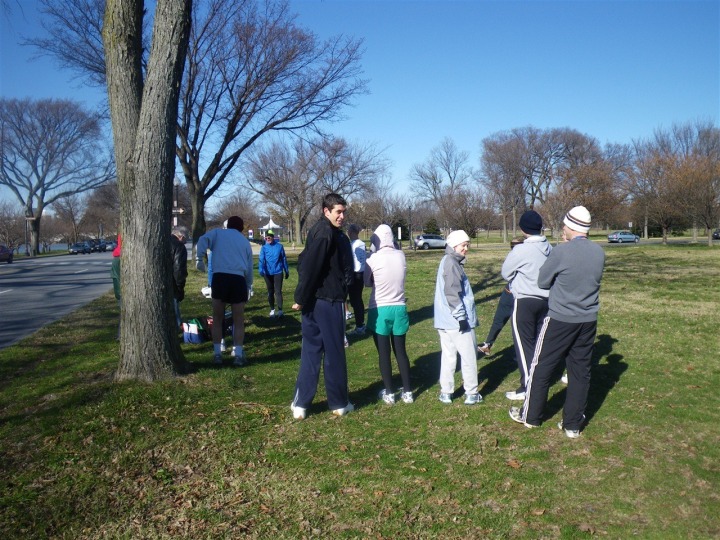 I take the little bit of time I have and head out for a very brief 10 minute warm-up run.  Given the temperature is cold-ass, and the winds are colder-ass, I think I actually ended up colder than I started.  Not helping matters was that my Z2 pace from last night had somehow morphed into a Z4 pace.  Eek.

Nonetheless, I got all registered (which is free, and takes approximately 12 seconds – or the time to right  down your name and sign off on a waiver saying if you die, it’s your problem).

Before I knew it we were lining up at the start line (aka the crosswalk).  I think I was actually more anxious at the starting line about this race than either of the two Ironman’s this year.  It’s simply a different kinda pain. 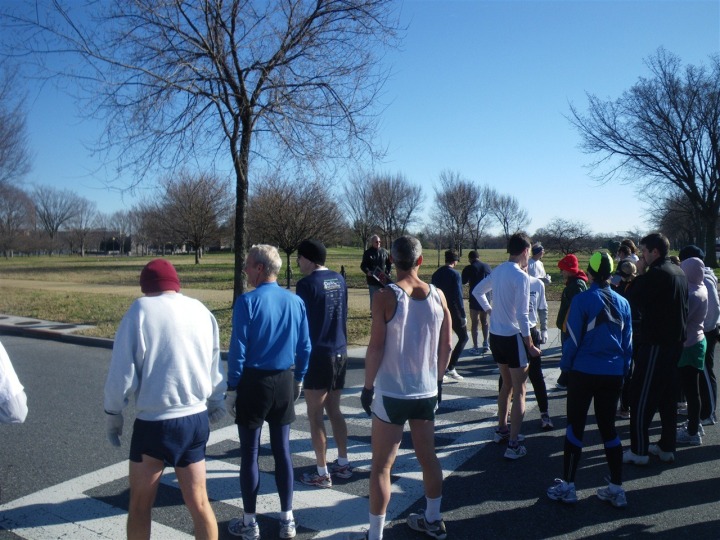 And off we went.  Oh and before we continue, I should note that 3K is equal to 1.8ish miles. 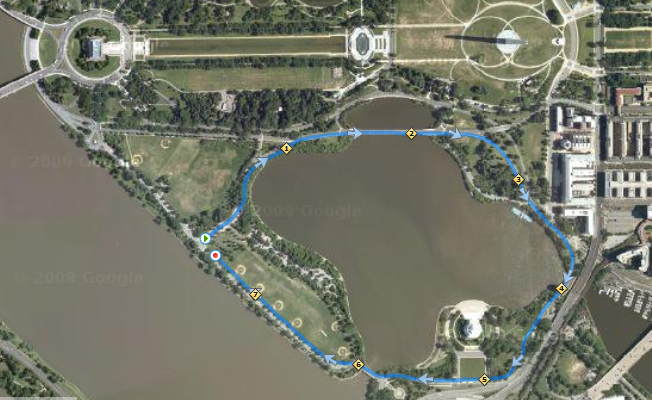 Like last year, I found the pace pretty comfy for the first little bit.   We started off at basically 5/minutes/mile flat, and then fell into the low-5’s.  Me and another guy were pretty much side by side.  We hit the bridge sidewalk where your kinda forced to go single file for about 45 seconds.  It’s at this juncture I made a serious tactical error.

See, I should have realized the pace we were going was not viable for me today for another 1.4 miles.  But I failed to consider that.  Instead I did the dumbest thing possible – I sped up.  No idea why.  I think I thought I might be able to drop them and then they’d back off in defeat.  Again, lack of oxygen to brain may be the culprit.

The smart thing would have been to slow down to allow myself to actually breath so that I could push again hard once off the bridge (read: So I could hold on for dear life or otherwise prolong my death).

Now would be a great time to take quick look at the today’s pace chart (yellow lines are every quarter mile, also noted above on satellite image).  Stop laughing at how much it slows…I hear you laughing.

See that section above at about the .40 mile marker?  Where the pace drops?  Yup, that’s were dumb me decided to speed up.

Then we hit a slight hill.  That hurt.  I took a quick picture of the guy right in front of me (he passed me post-bridge and became 1st place). 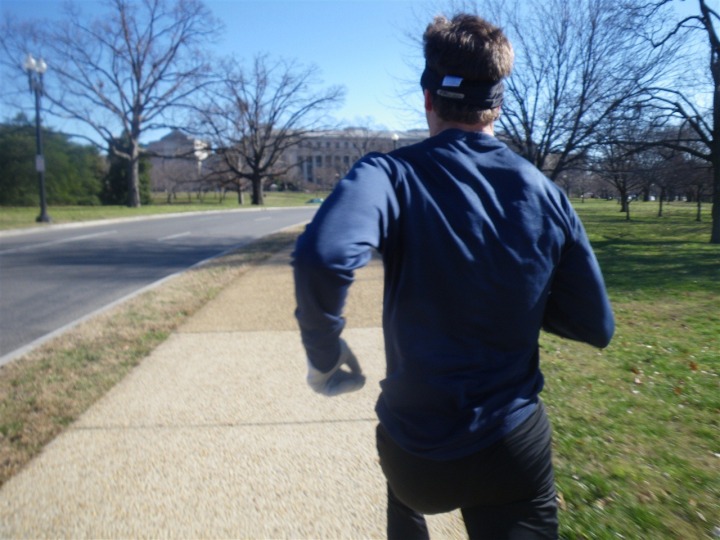 From there we went down and rounded the backside of the basin near the little paddle boats.  It was roughly in this range that dropping into the near-icy water seemed to be a better option than continuing.  It was also at this time that my HR was really starting to hit red-line max:

Though, that was only half-way.

Around then the 1st place guy started to make a pretty solid few dozen yard lead on me.  And 2nd place wasn’t far behind me.

A short bit later as we passed Jefferson, 2nd place dude made the pass (in white below).  You can see the zig-zags in the pace chart above as I sorta tried to hold on, but my body wanted to die. 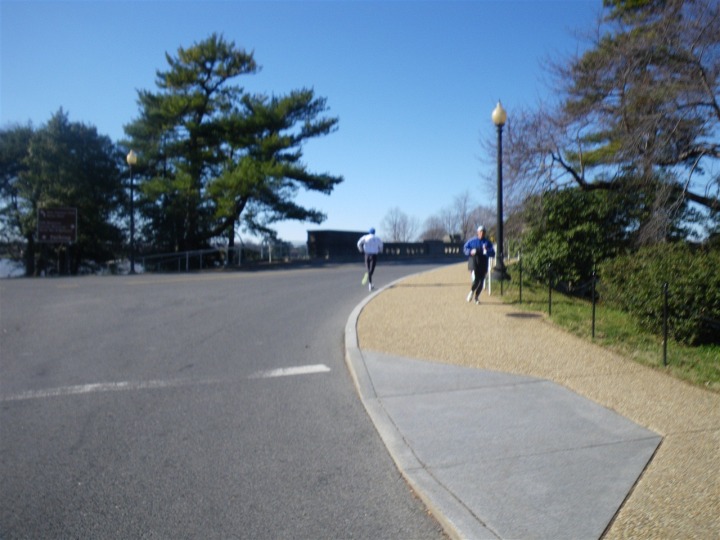 Finally, we turned towards the home stretch.  Normally a joyous time celebrated by runners the world around.  But not today.  Today that meant a direct headwind for the last 1/3rd of a mile.  Who knew a a simple 1/3rd of a mile could last so long? 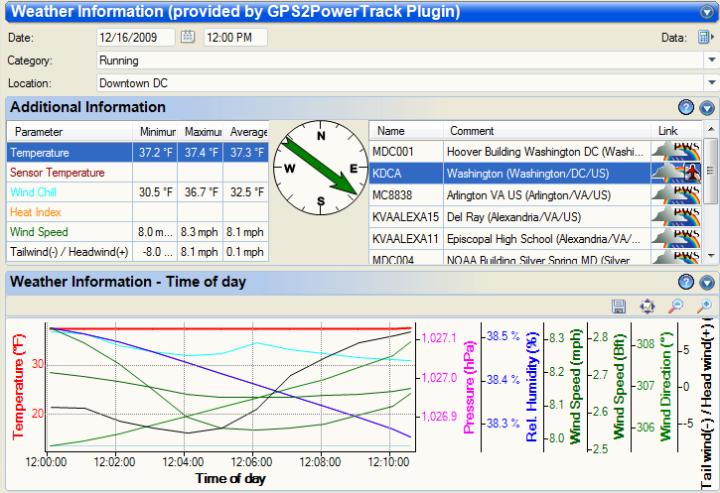 (All these graphs and stuff are from Sports Tracks, the weather plug-in above I talk about here)

Now would be an ideal time to refer back to the pace chart – but this time overlaid with my desire to curl up and die (Green = low, Red = High):

(Do note in the above graph that just because the race ended, my pain did too.  No, I felt it for a number of minutes afterwards, and my lungs felt it for a solid few hours)

Here’s a picture of the 2nd place guy, some 7 seconds ahead of me (that’s how fast we were moving, that massive gap is only 7 seconds). 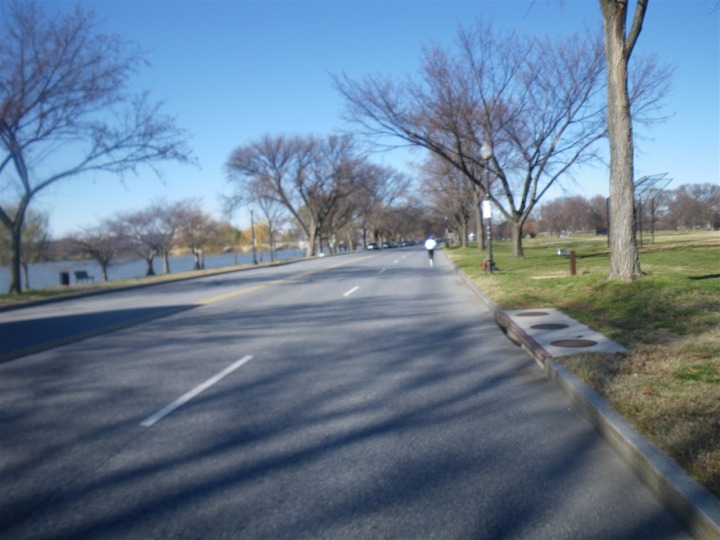 Now, to be fair, I did speed up a little bit at the end for the last 1/4th of a mile or so.  Mostly because I wanted this thing to be over…so badly.

After you finish you fill out your own little form.  The wind blew all the sheets around, so they just told us to simply write our position number over the other number.  For me that was third.  And like last year my fingers were frozen so my hard writing was reduced to kindergarten levels. 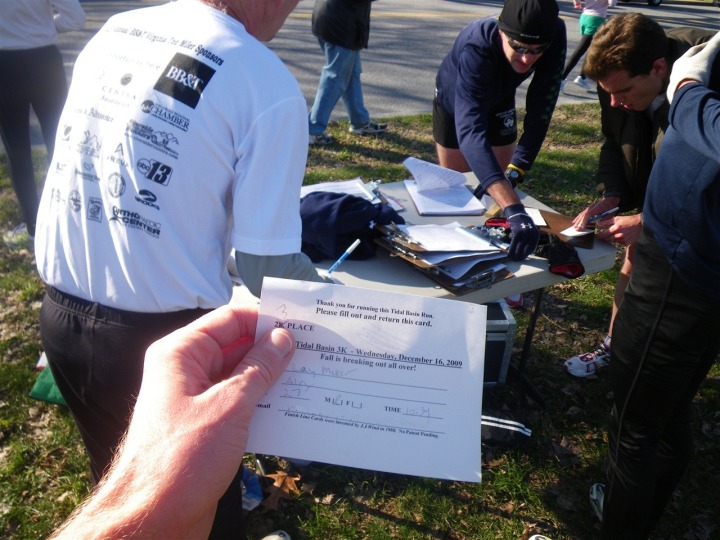 I then watched a few people finish in between continuing to want to puke. 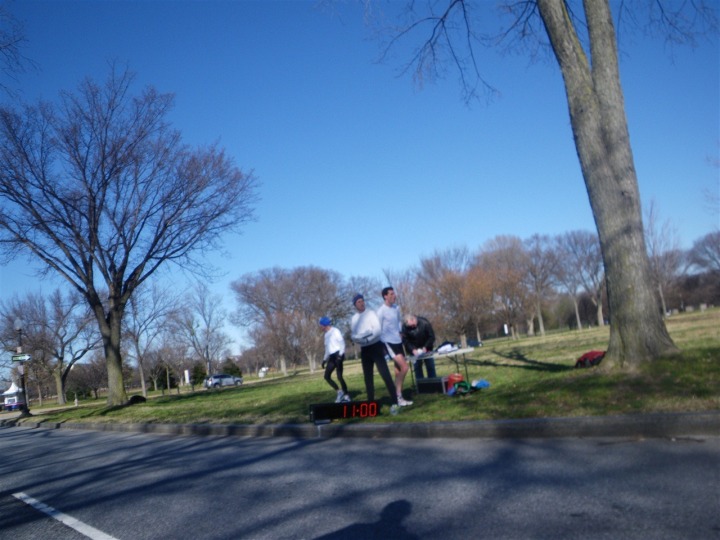 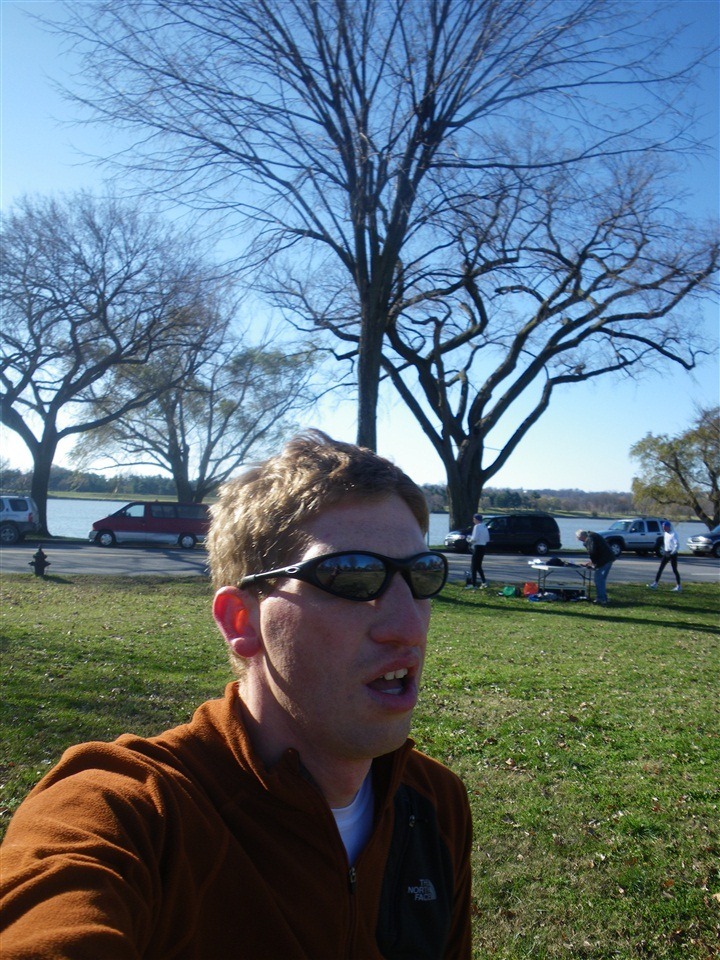 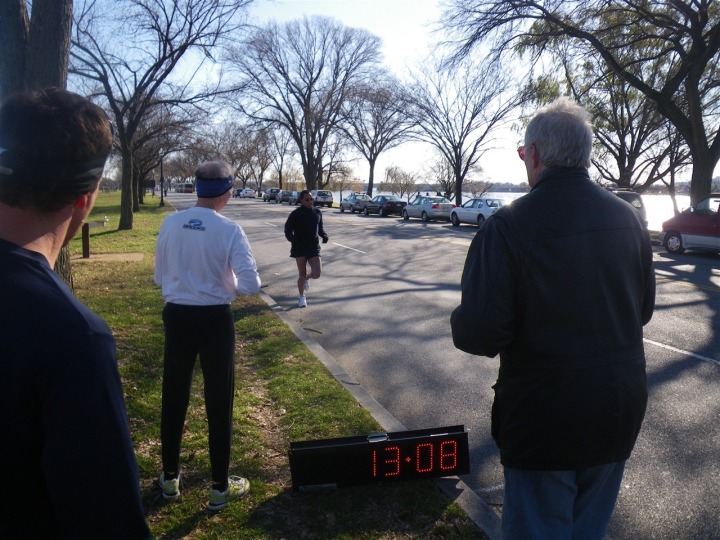 Following which…it was time to go on home and back to work.

On a side note, you have to be impressed with a race that e-mails you the results within three hours of the race.  Pretty damn impressive: 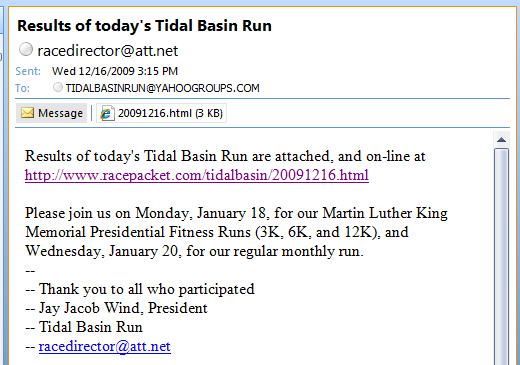 Oh and yes, for those curious there were more than three people in the race (and more than the screen clip below). 😉

Maybe I’ll try and get out there again sometime before next year.  I’m relatively confident given a few track sessions (I haven’t been on a track in a while) I can pretty easily drop my time a fair bit.  Plus – with next year’s focus on short-course, they’ll be all sorts of opportunity for puking pain.  Fun times ahead…