It’s been about a year.  A year since Peter first started poking me about coming out and running the Tidal Basin 3K monthly race.  But earlier this week I poked him back and asked him if he was going to be there this week to run in it.

He in turned replied with: “Time to put up or shut up.” (it’s an exact quote, see the comments section of this post)

So clearly, once prompted – I can’t back down.  Especially not to someone that may be a whole number multiplier of my age.  Thus yesterday around 11AM I headed to downtown DC for my first 3K race.  Mind you, I’ve never done a true 5K race (well, racing in a Turkey costume doesn’t count from a ‘race’ standpoint).  Add to that I wasn’t even sure how long 3K was anyway, it’s like Canadian money or something.  All funky.  Turns out it’s 1.86 miles.

I arrived at the site around 11:30 and went for a 3ish mile warm-up run around the basin and a bit extra here and there.  I ended up back at the start at 11:50AM, just in time for registration.  There is no packet pickup or fancy bibs or numbers.  You just run.  Kinda refreshing, but then again – perhaps the refreshing part comes from knowing this monthly race has been going on for 32 years. 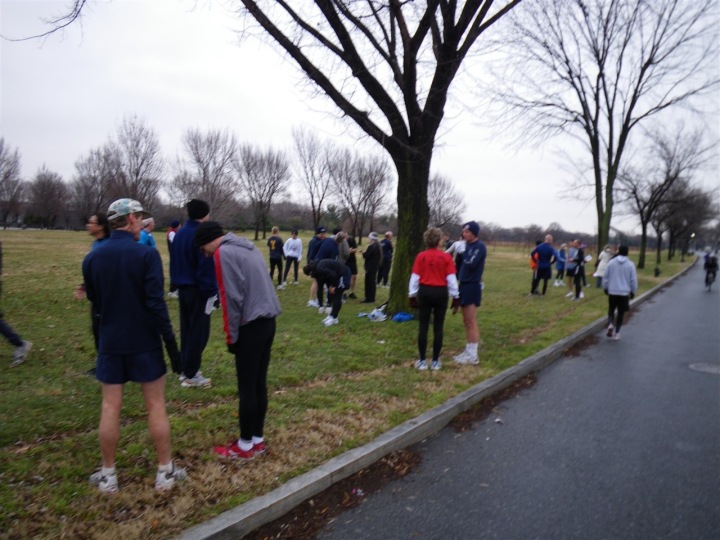 You write your name, age, city and gender down on a clipboard and then wander around a bit.  I met up with Peter and he gave me the deets on the course.  Roughly translated it was: “Run around the big puddle of water”.  Check.

Except, there’s a lot of ways to do that, multiple sidewalk paths and the whole bit.  The only part that was super-clear was once I passed Jefferson at the bottom of the clockwise course, it was straight onto the road and blast home from there. 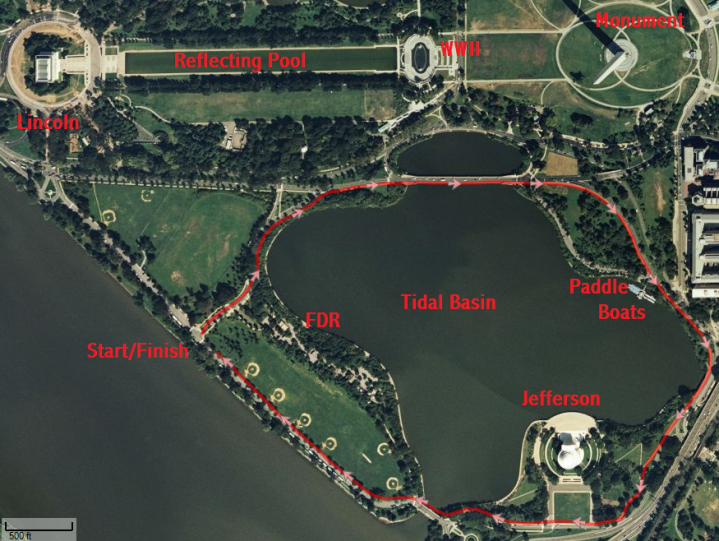 About fifty folks turned out for it, and a little after noon we all lined up across a crosswalk in front of the FDR Memorial and waited for the whistle.

Soon we were off.  And thankfully – at a much tamer pace that I expected.  I was expecting some bolting sprint like you often see in every race.  But everyone was quite tame about it.   I should clarify that tame was a 5:36/mile.

Because I didn’t know where I was going, I basically sat in 2nd/3rd place with three guys.  We were generally running abreast in a line, but anytime there was any doubt I’d slide back a foot or two to make it clear they were leading.  However that lead to the overriding realization of the day: It’s hard to win if you don’t know where you’re going.

As we cruised by the paddleboats we passed some random tourists I wondered what they thought as a group of 50+ people barreled down on them – arriving and then disappearing again much like a high speed train.

From an exertion standpoint the race was going pretty well.  I wasn’t hurting by any stretch.  Just sorta bumbling along.  Shortly after the paddleboats someone in the mini-group made a play.  Well, it wasn’t clear it was a play – but the pace definitely picked up.  You can see it right at the 5:00 minute marker below (the drop in pace).

The play didn’t last long, less than a minute.  Although I was hovering in 2nd/3rd, I found that I could actually drive the pace.  If I slowed, they slowed, if I sped up – they sped up.

As we flew past Jefferson I knew it was almost time to make my play for the lead going into the finish.  I slowed a tiny bit as we crossed the little canal footbridge (to the left of Jefferson) to make the impact of speeding up seem greater.

In the span of about three seconds I kicked it up and left them behind.  You can see that kick above at the 7:00 minute marker.  Once I had settled into the lead by a good 100 feet or so I slowed a bit.  And then over the final 90 seconds or so I kept on speeding up to ensure the nail was in the coffin.

Once you arrive at the finish you get a little slip of paper with your place on it.  You then write your own time.  The only catch was I forgot to wear gloves and my hands were freezing and virtually numb.  Writing was rather difficult.  I promise I normally have handwriting better than a 2nd grader…like you know…a 4th grader. 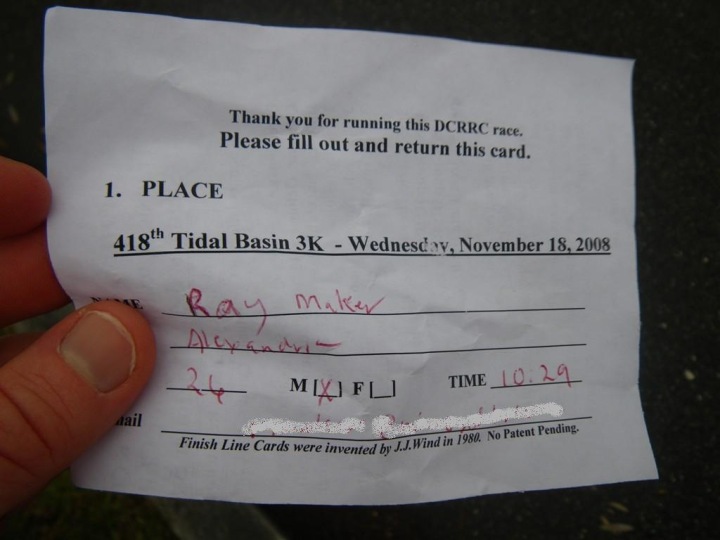 A short bit later I caught Peter coming into the finish: 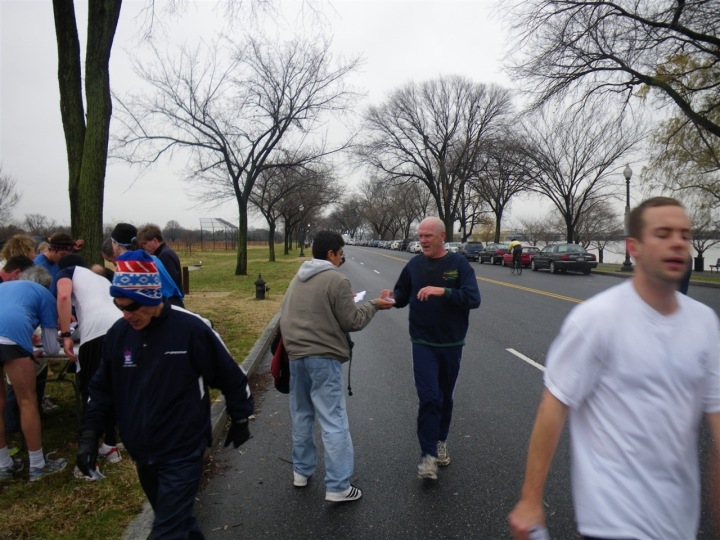 And then afterwards met up to chat a bit and get a quick photo: 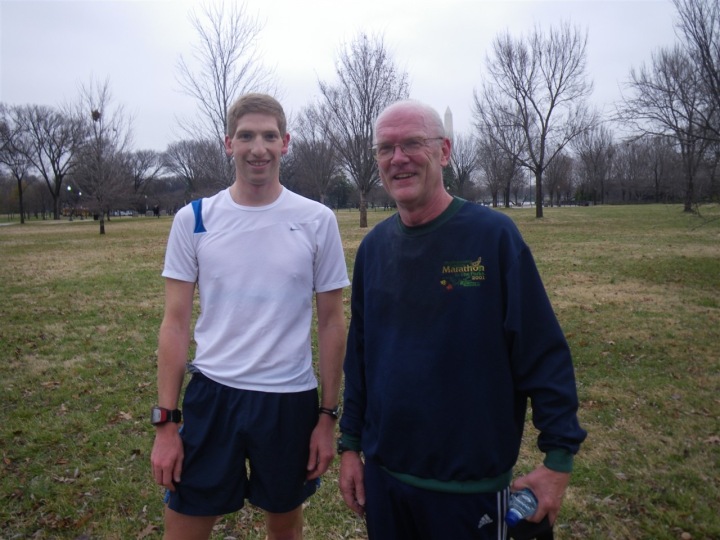 Peter’s a pretty cool cat and you should definitely take the opportunity to run with him if you can.  He’s a coach with the National Marathon training program, and is always out and about running around the DC.

In addition, you should absolutely check out the 3K race.  It’s FREE, fun…and fast!  Plus, it’s low-pressure.  I’m definitely coming back next month…and as often as I can!  And now that I know the course…’fun’ will ensue next time.  I definitely appreciate Peter letting me know about this little hidden gem.

Oh…and for the record…I put up.