After attending a wedding Saturday evening, the girl and I were mixing up our nutrition for our long ride the next day when I realized that I had just gone through an ENTIRE CONTAINER of my sports drink (EFS) for the next day.  A full brand new container…gonzo!  At $19 a pop…or in effect, $19 per ride.

While lamenting the fact that this brand new container was now gone, she correctly pointed out that if you compare it to the prices of drinks at a bar, it’s actually a pretty good deal.  So…I feel better about it when you think of it that way…

With that minor (though costly) detail out of the way, I was ready to head to the mountains the next morning (Sunday) for a nice 102 mile ride.

Upon arriving, the rangers had created this cute little sign describing the weather: 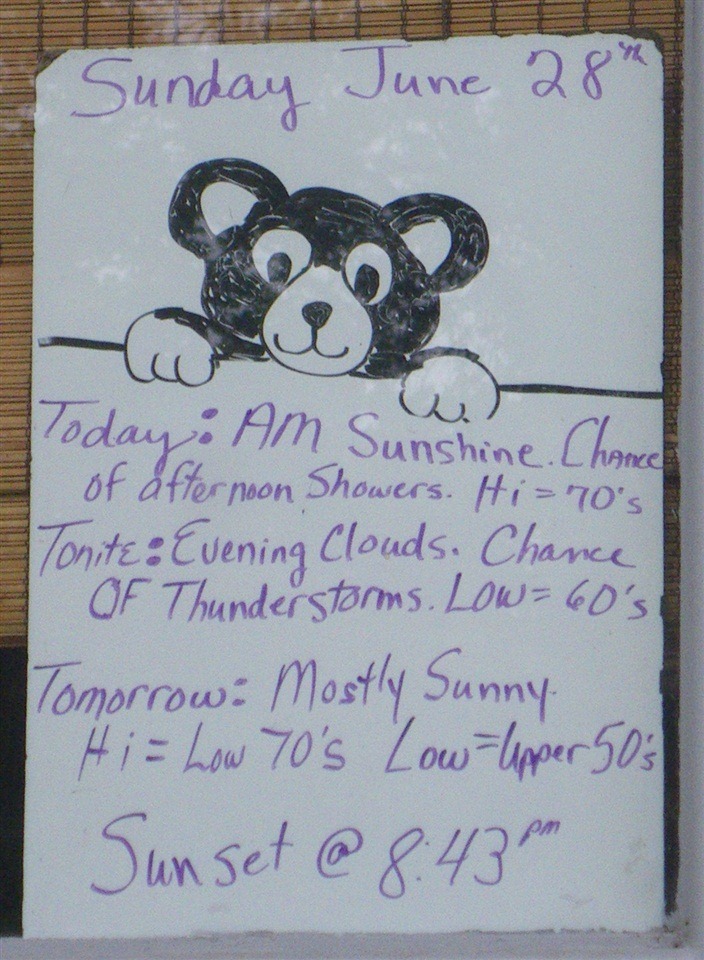 A few minutes later we arrived at the visitor center where I usually start.  I quickly unpacked my gear so I could get the show on the road. 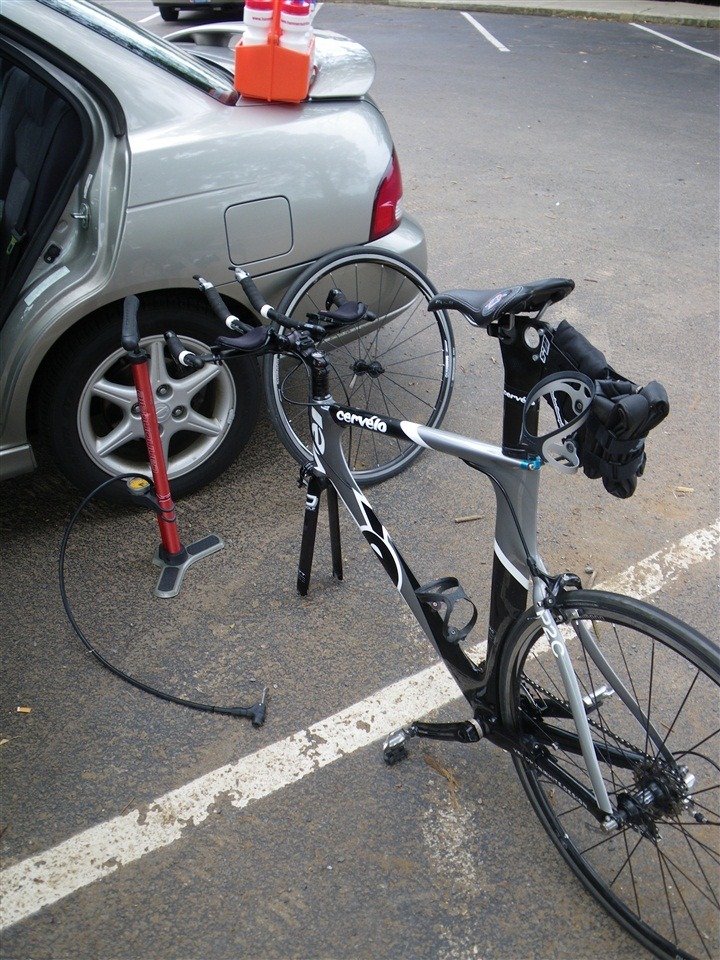 And before you knew it, my flight was ready for departure.  Again with all of the bottles I felt like a big ole’ airplane ready for departure.  Very…very…heavy.  But, that’s how I usually do my long rides.  I’d be out there 6+ hours and only make three very brief (under 3 minutes each) stops along the way to replenish water. 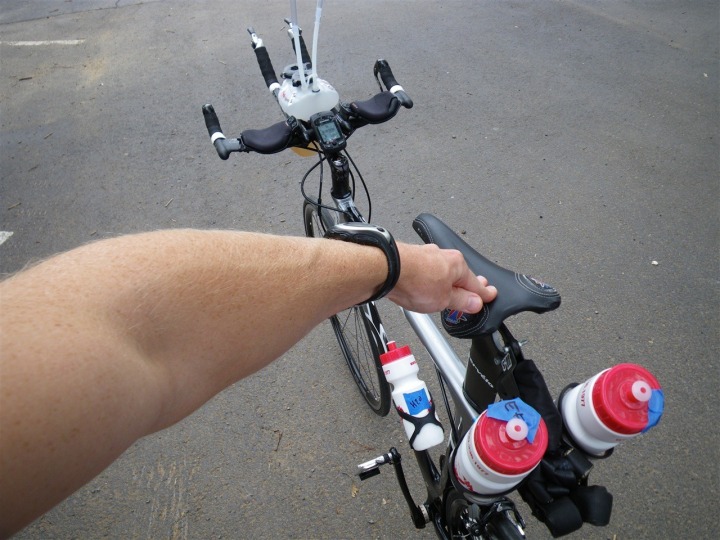 In general my ride was very…quiet.

Not sure why, but there weren’t many people up there, nor many cyclists.  It was kinda a blah overcast day that seemed to threaten rain shower (like the little bear), so I suppose that kept away most of the tourists.  So it was sorta lonely compared to normal. 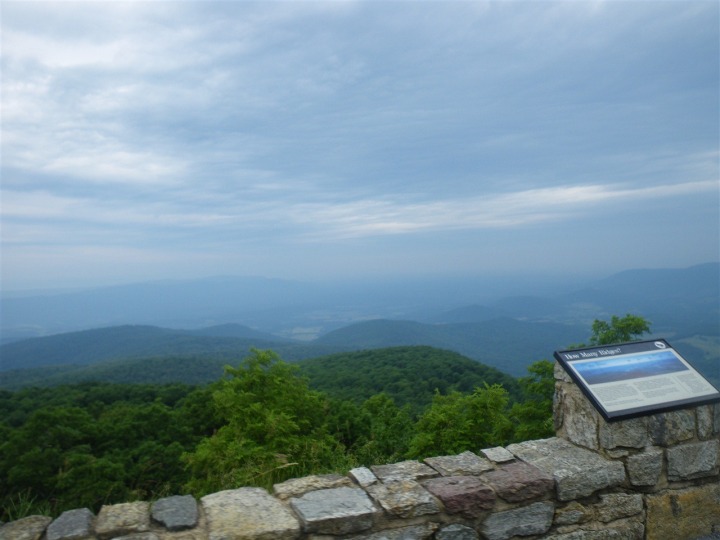 But I made good time to my first and second checkpoints, so that wasn’t too bad.  But my cadence was a fair bit lower than I would have wanted.  No real reason – I think I just kinda started out lazy and didn’t snap out of it, so I got ‘stuck’ there.  I find that the first 15-20 minutes are pretty critical for setting the ‘standard’ of a ride – even a ride of 6 hours.

Eventually I’d pass the highest point on the drive where I turned around last time. 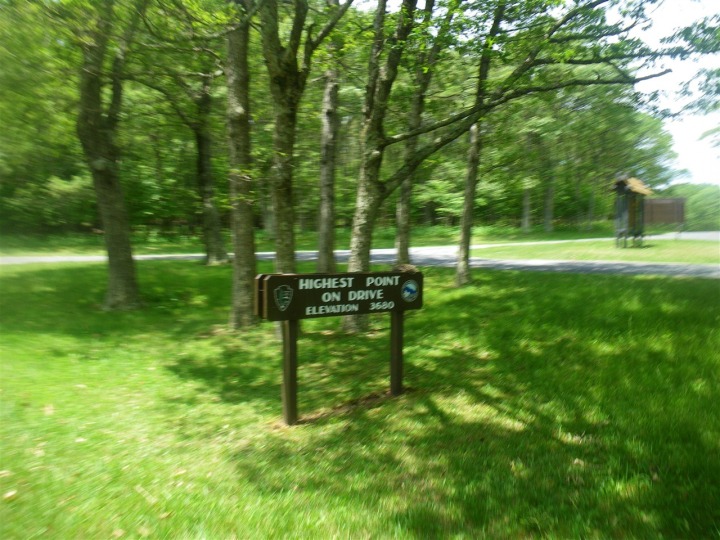 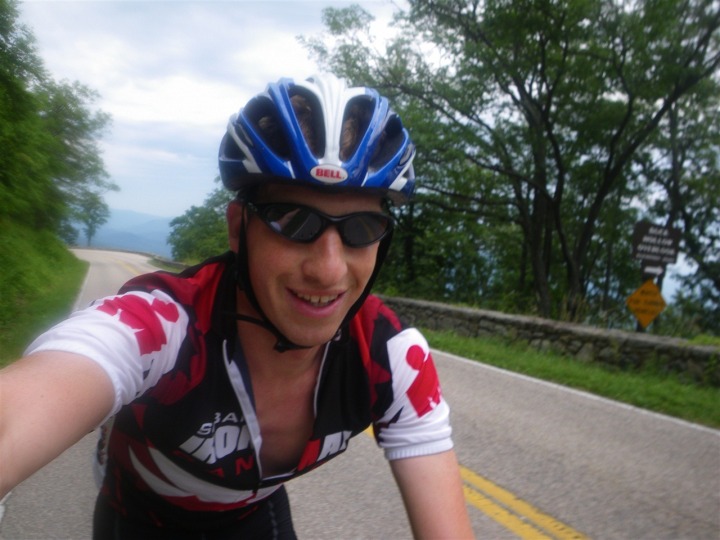 For those newcomers who may not be familiar with Skyline, it’s basically what happens when someone decides that instead of building a road up and over a single mountain (like normal humans do), they’d build a road on top of an ever changing ridgeline, so you go up and down for many many miles on end (the road is about 100 miles one way).

Here’s what my ride looked like elevation wise, in total just shy of 10,000 feet of climbing yesterday:

Now, the good news is that apparently all my Skyline joy is rubbing off, as both Jeanne and Adam tackled it Saturday with a group from the DCTri Half-Iron Training Program.  So woot to them!

Meanwhile, I slowly worked my way towards the faux-summit (what all the tourists think is the summit, since it’s where they all stop).  Luckily this sign wasn’t an issue: 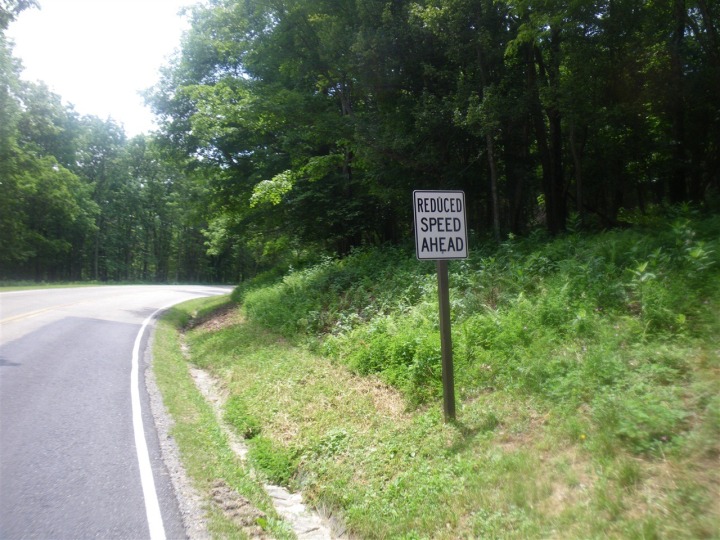 Which reminds me of a brief moment of humor on my ride…Around mile marker 24 I made a fast descent down past a rest area of sorts.  The speed limit drops to 25MPH there (from 35MPH), but coming off a hill and going into some flats, I like to maintain my speed a bit.  A speed of say…41MPH yesterday.

And what would I find as I rounded the bend and cruised through the rest area?  Umm..Mr. Cop.  Meanwhile, at the same time a small contingent of well-kitted out pro-looking cyclists meandered out onto the road (probably at only 2-3MPH).  All as I blew past at 41MPH in aero (how else?).  The cop gave me this look of “Really?”, and the cyclists just looked confused with a solid “WTF?” look on their faces. 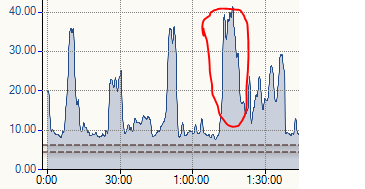 Now of course, once I passed them all I couldn’t just slow down.  As I feared Mr. Cop was coming after me and I wanted to at least look like I was working my ass off when I pulled me over.  So I pedaled my ass off for a least the next 1-2 miles.  Full tilt 30MPH across the flats hauling ass.  It would end up being my biggest HR spike of the day, easily surpassing my time trial later on.  He never chased after me, so I never got my badge of honor (a speeding ticket on a bike).

I found it (the faux-summit): 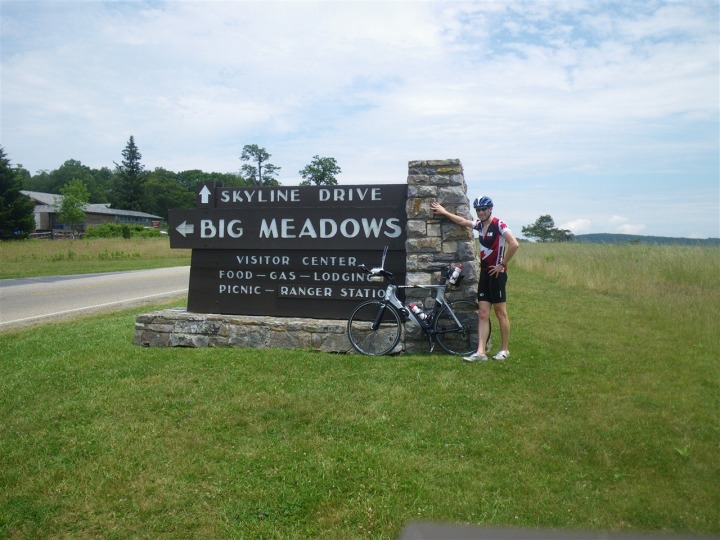 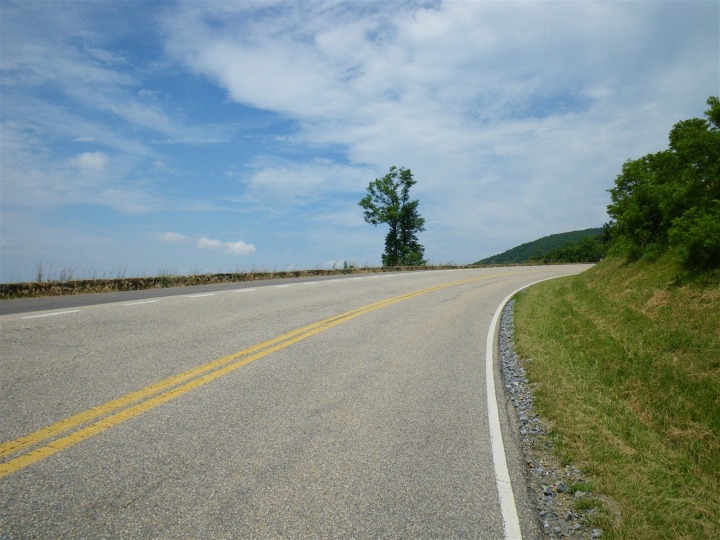 And a fair bit of deer, though all were by themselves: 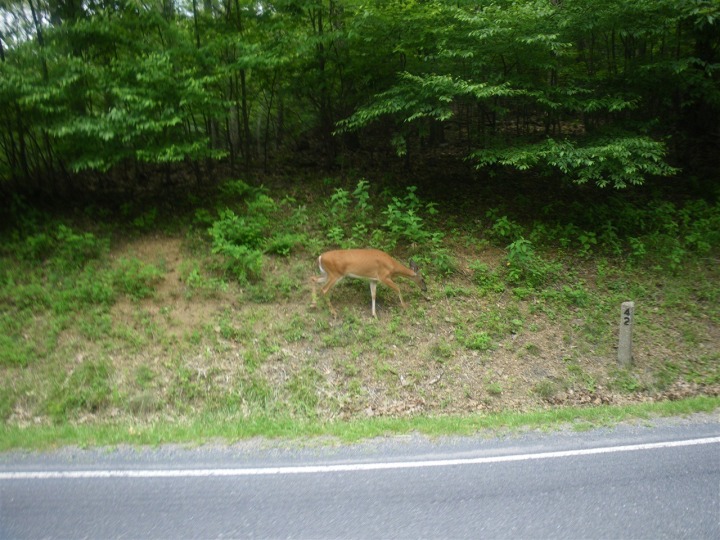 Eventually I made it back down to the park entrance (passing my car in the process), where I had the joy of going back up the 4.5 miles to the visitor center.  As I’ve noted in the past, this is really the steepest climb of Skyline drive at 1,000ft of climbing in just that section, so it’s lots of fun at miles 98-102. 🙂

Though, at 5PM, the sun was starting to fade being the inbound rainstorms, making for an interesting picture: 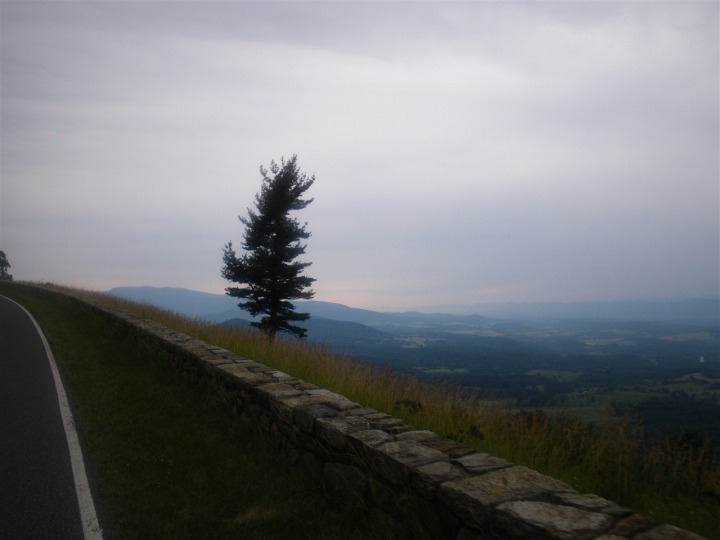 Finally, I arrived back at the visitor center to knock out a quick 5K run before calling it a day.  The run went very well for Z2 (low 7’s per mile, despite the 100 previous miles of cycling).  So I was happy about that.  But…I was far happier about getting a burger: 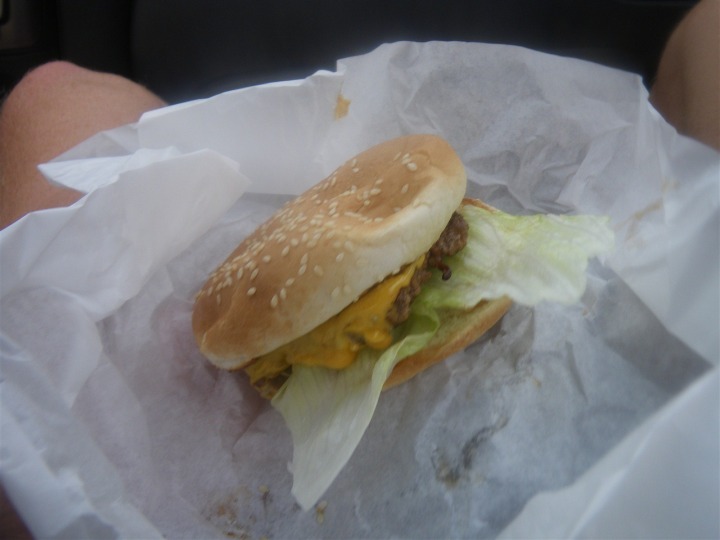 And with that, another Skyline ride in the bag, and the first century of the year – just 2 months ahead of Ironman Canada.  This week I’ve got a mixed bag of intensity early in the week (with another 20-miler run for Tuesday), before I began a solid 10ish day taper for Rhode Island 70.3.  With both Kona and Clearwater slots on the line (which is unique), we’re trying to really through it all out there on the line.  More on that later this week though…

Antarctica Update: Oh – and for a quick Antarctica update (sending me to Antarctica)…we’re making good progress, but…I’ve got a long ways to go to catch up to some of the leaders.  Now, I’m all about being the underdog, so…it’s definitely GET OUT THE VOTE TIME!  Feel free to post the link on your blog, Twitter, Facebook, or even paint it on the side of your garage (note to kids: ask parents prior to painting…actually, on second thought – just do it!).  If you do paint it on the side of your garage or car, I’ll post a picture of it here, and perhaps the Girl and I will even send you a special penguin cupcake…