This week has been full of all sorts of random stuff.  Given it’s been a recovery/taper week leading up to Sunday’s race here in DC, I’ve had a lowered volume of workouts.  A quick recap would be:

Monday: 20.02 mile run…ok, so that one wasn’t lowered – but it was a pretty kickass run to finish off the build period.
Tuesday: 2200y swim ending with a 500y time trial.  The TT was 6:40, which is one of my better ones, though I’ve been making some pretty solid time increases the last month or so, slowly chipping away at it.  Still lots of work to be done there though.
Wednesday: Wednesday was another fun track-brick combo dish.  34 minutes of high intensity bike followed by 5.55 miles of track circles. Most paces were hovering right around 6:00/mile, which is nice.
Thursday: An even shorter 2000y swim ending in a 250y time trial.  I got this TT done in 3:14, but I should have been faster given the first few laps were a fair bit faster than the last two laps.  Need to ensure that I don’t get lazy on the finish of the stroke when I get tired.
Friday: Day off – booyeah!  I so rarely get a day off that it’s pretty awesome.  Going out tonight on the town with the girl…though with both of us racing on Sunday, likely no drinking…

Given the reduced volume of training, that’s allowed for other activities – such as actually making a semi-real meal during the week.  So last night the girl and I made pizza’s, they were pretty kickass.  Oh, and the basil on my pizza is from my little deck garden, which is coming along quite nicely.  That’s her mushroom pizza below…Yes, there is actually some dough below all those mushrooms. 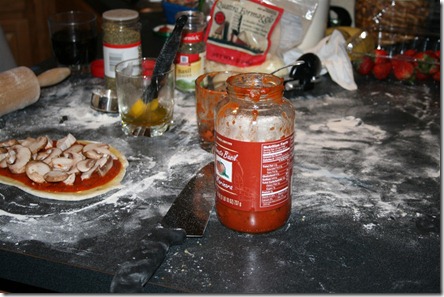 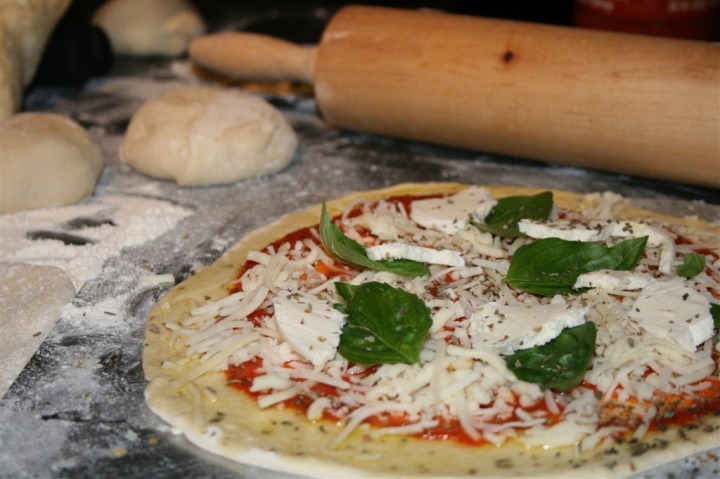 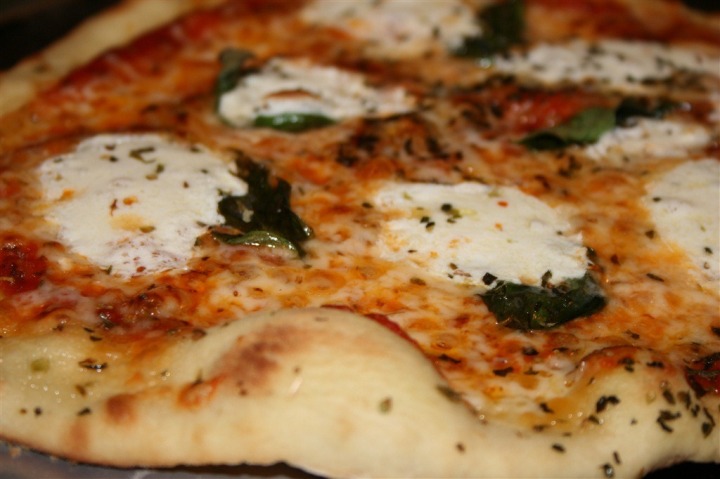 Rewinding a bit more…on Monday night’s run I switched to using a CamelBak for hydration.  For long runs it’s simply too difficult to carry the right amount of water (more than a single water bottles worth), as well as the gel.  Up until this point I simply just carried a water bottle in my hand, along with a gel bottle.  But last week’s long run I ran way short on hydration and the pace suffered pretty heavily.  Further, in last week’s track session Coach Alan found that it actually dorked up my running technique a fair bit, even when I wasn’t carrying it. So…no more water bottle. 🙁

Surprisingly, the CamelBak wasn’t as bad as I thought it’d be.  I was able to drink as much as I wanted without fear of running out, which is nice.  Interestingly, it led to my fastest 20-miler run yet (despite being 80*F outside).  Sweet!  CamelBak is here to stay! 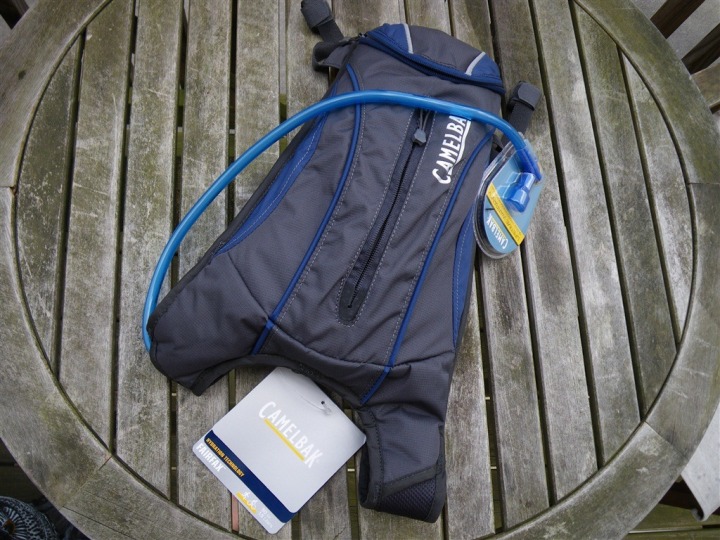 I had initially read Running and Rambling’s (Donald) massive series on hydration packs, which was awesome and really helped quite a bit.  But in a time pinch I had to go with what the local REI had available, and my coach recommended the CamelBak Fairfax (above), which is what I got.  It holds 60 ounces of water and two little pockets for gel bottles, which worked out perfectly for my 20 miler. 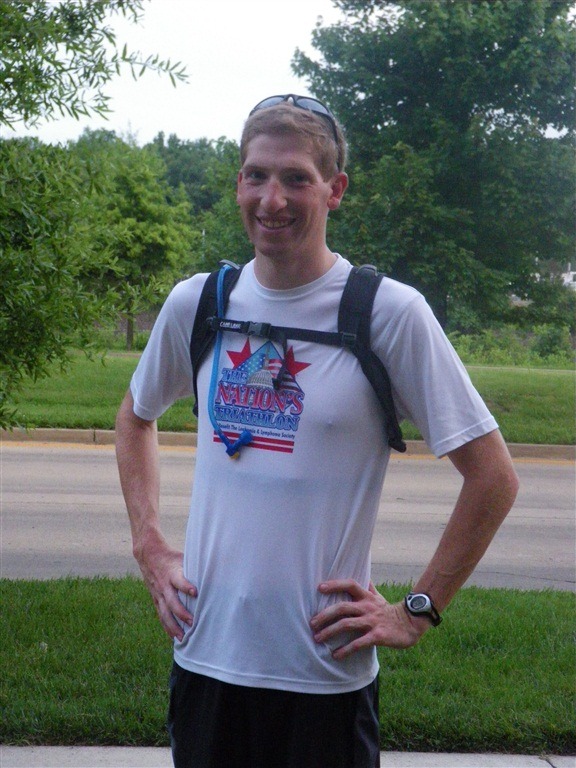 Me, after my long run last week.  And soaked… 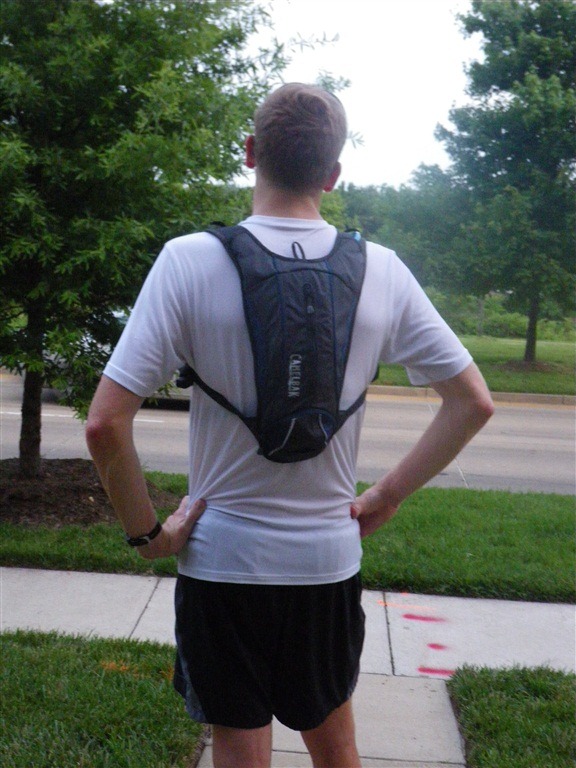 Finally, also on the list of things to ‘deal with’ this week was replacing the tire on one of my race wheels.  Back a few weeks ago my rear race wheel flatted while sitting at home for no apparent reason.  I eventually found the tiny gash, but that still meant I had to replace the $90 tubular tire.  Of course, I waited around until today to deal with this as it required ripping off the old one (relatively easy), and then getting the new one on to stretch it a bit, and then later tonight actually gluing the new one onto the wheel.  It should be a fun-filled occasion. Normally you simply rotate your spare (which is stretched out already and usually with a touch of glue on it) to your flatted wheel.  But given that I didn’t flat out on the road, I might as well just keep the ‘good’ spare there, and do the work now to replace the back tire with a new one…which, resulted in thus much fun so far: 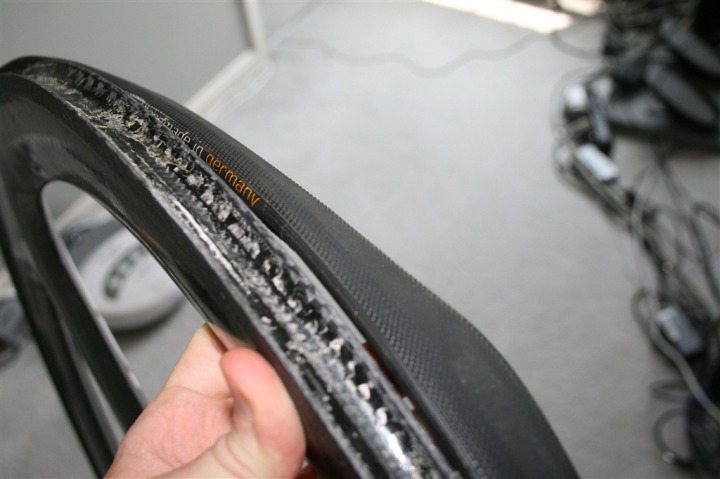 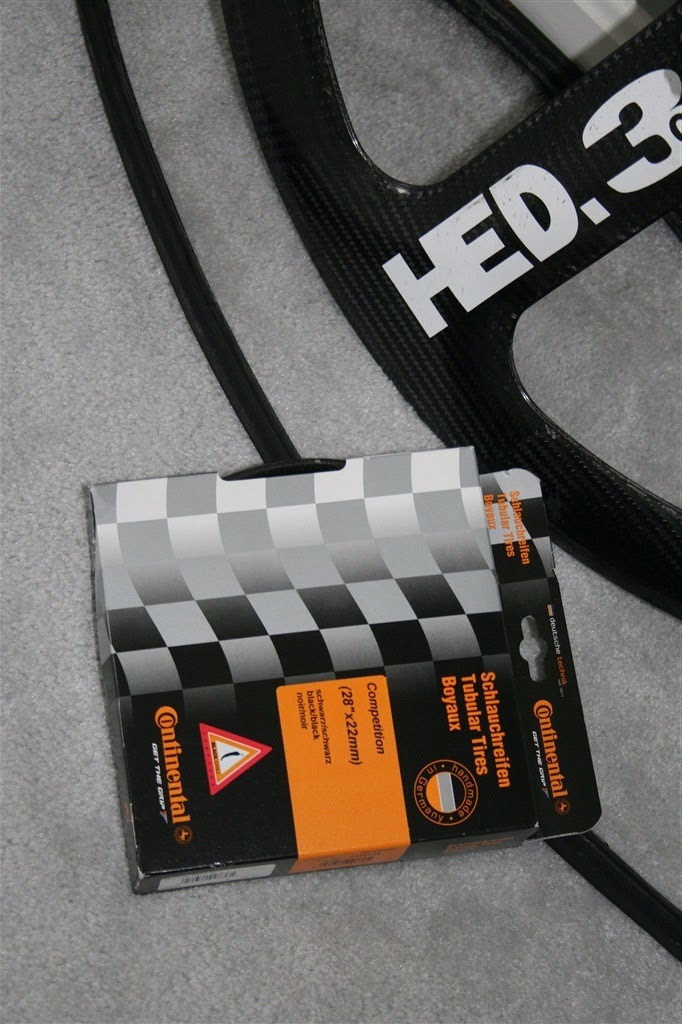 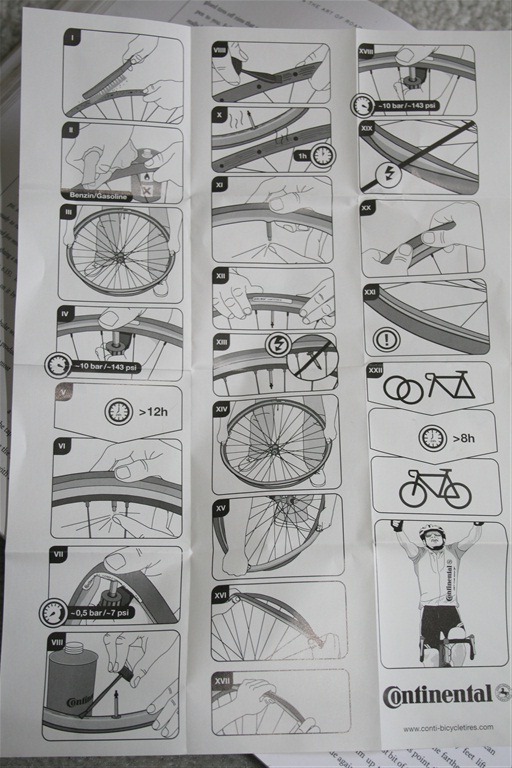 At any rate, off to dinner!  Catch ya after the race Sunday.  If you’re anywhere near DC, you should really come on down and at least watch the Pro’s go off at 11AM and 1PM – it’ll be well worth it given how big of an event it is. I’ll be out there watching.  And if you’re anywhere else in the world, you can watch it on live TV on the Universal Network, or numerous other TV networks worldwide, plus the Internet live.  Have a good weekend!