Finalizing the list and checking it thirty billion times

It’s not even the end of the race year yet – and I’m already putting on the finishing touches for next year.

One of the sucky things (actually, really the only sucky thing) about triathlons is how early the races sellout.  Of course, everyone knows that the major North America Ironman races sell out within hours of opening – and a year in advance too.  But what many folks don’t realize is that many of the more popular regional races also sell out within hours or days of opening.  Thus the necessity of figuring out the major chunks of the schedule for next year.  A number of races begin to open now through December.

I started almost two months ago – mostly in my head first.  And then over the last month I’ve cracked open my massive Excel sheet with all sorts of races from the past three years in it.  In that I add interesting races whenever I hear about them, and then come this time of year I can start to narrow down the list. 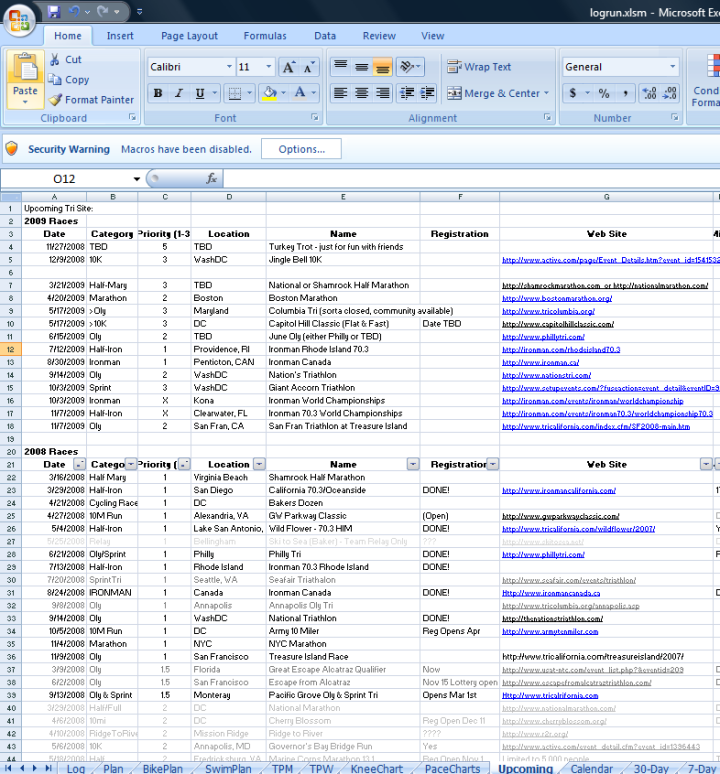 (You can see my multiple duplicates for both this past year and next year, I use grey to indicate races crossed off the list, and I have a priority system.  The sheet goes on for quite a ways.  Also note, I’ve changed up some stuff on the upper half, so it’s in flux still.)

So what’s going into my race pickens for next year?

Here’s a few difference resources I’ve been using though to look-up races.  Note that some races haven’t announced/published when the race is next year, so I often use the 2008 schedule to get an approximate date (and flag it as such in my sheet).

Here’s some DC-Metro/Virginia/Maryland Companies with lots of events:

One other way I find events is reading peoples race reports.  Places like the DCTri Forums, and the TriFuel forums are great for that.  It also helps as they offer the athletes view – separated from the typical  marketing sites the races put up.

Oh, one last thing.  I use Outlook reminders to put in my calendar when a race options for registration.  For example, I had a reminder on Monday morning for the Philly Tri – and I have a reminder in December for the Nation’s Tri.  Both being races that expect to sell out quickly.  Good luck!