Today…well today was a long day. I knocked out my first century ride. Technically 101 miles. Except, this wasn’t no flat-ground century. Nope, this was back up on Skyline again (in case you haven’t noticed by now – every one of my long rides is up in the mountains on Skyline Drive). And yes, it’s a Friday. Normally I do them on Sunday, but I got family coming in early tomorrow morning – so I had to move things around a bit. 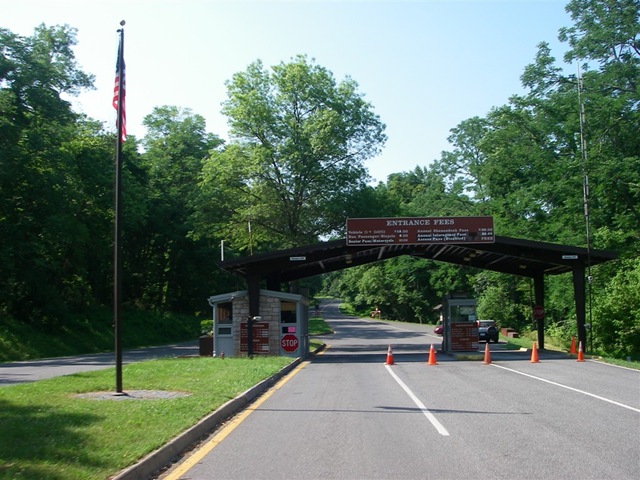 (The North Entrance to the Park) 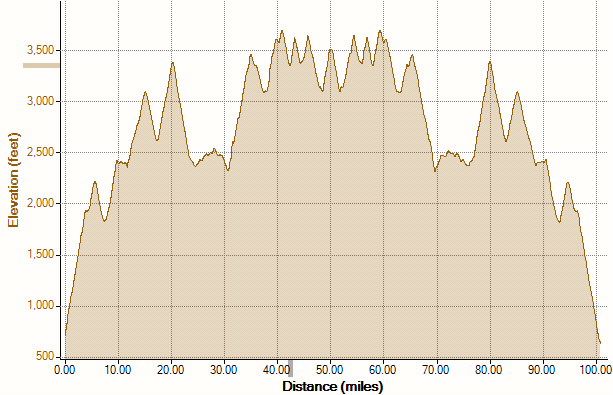 Over the course of the 101 miles I had the ‘privilege’ of pedaling my ass up 9,811 feet of climbing. That…that’s a fair bit of climbing. In addition to going up and down a gazillion times, I got to see quite a bit of wildlife today. And I’m not just talking the 48 or so caterpillars I think I killed. Or the one squirrel that tried to play chicken on an ascent (I won, I held my ground, I was only going 8MPH – it was my way or the highway – he ran away at the last second), or the hedgehog looking thingy, or the two snakes, or the one vulture (holy crap that was big), or the other eagle-ish birds.

Holy cow the deer were out in full force today! Revenge of the deer apparently. I saw probably 30-40 deer today, rather impressive. Some of them were pretty darn stubborn. I had to stop quite a few times. I probably could have fed Bambi if I had the patience. It really had no desire to go anywhere but look at me. 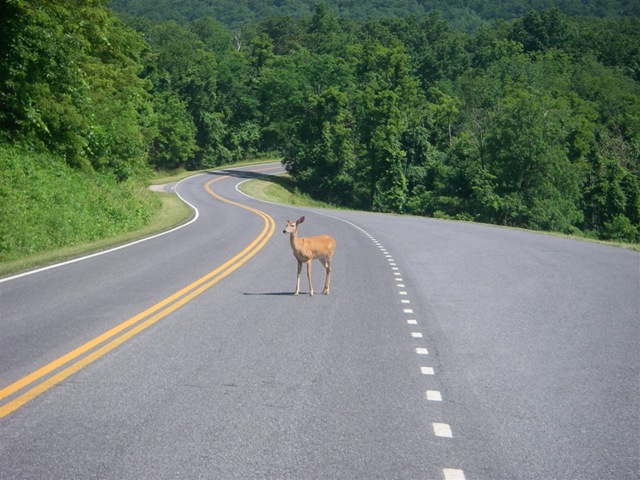 In addition to Bambi, I saw both Boo-Boo and Yogi. First I saw Boo-Boo just a few feet away – maybe 10’. he was munching on stuff in the grass. So I stopped and watched for a few minutes. He was REALLY into the grass (and really close). I could have put on a tutu and done an Irish jig and he still wouldn’t have blinked. But I got a ton of photos, none of which are very good because his head was munching bush the entire time. 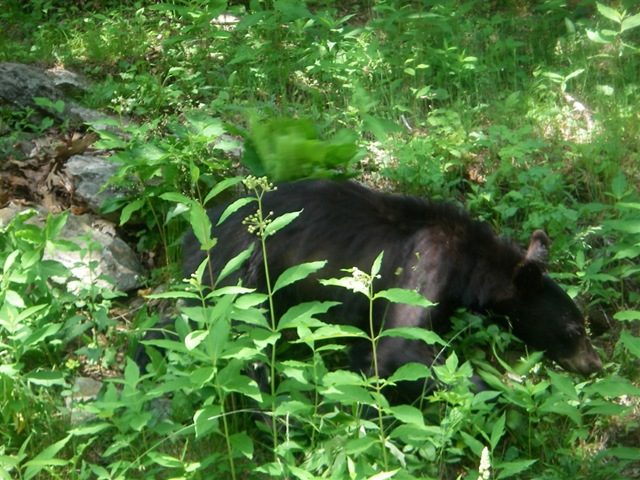 He looks bigger than he was. He was smaller than my bike. Like a big teddy bear from the fare! 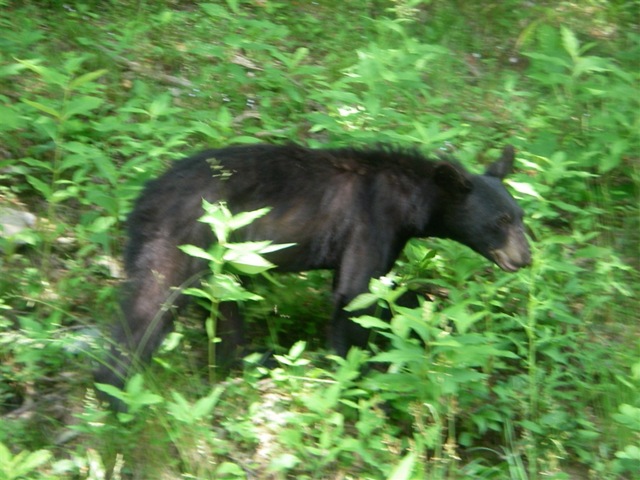 My ultimate goal on this ride was to get to Big Meadows – at mile marker 51, and then turn around and go back. So here’s the welcome sign to Big Meadows…it’s named after…well…a big meadow behind it. 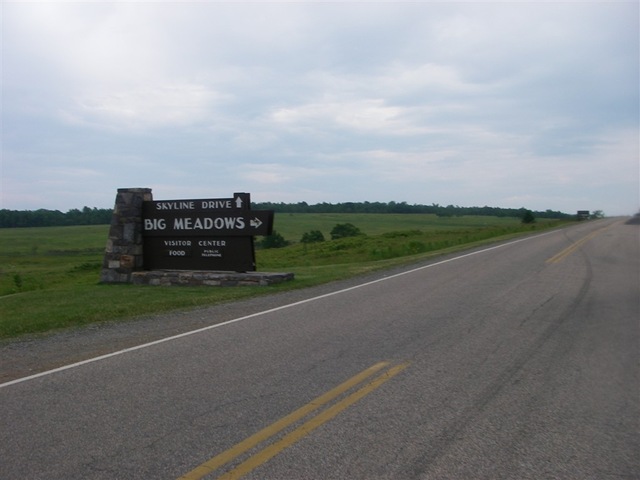 The weather was a mixed bag today. Sun, rain, thunderstorms, wind, clouds, sun. All while maintaining 90*+ out and some less than pleasant humidity. The wind and rain didn’t make for fast descending.

There’s a little country store and campgrounds and gas station at Big Meadows (in the middle of the national park). I was starting to feel somewhat tired after all the climbing, so I tried to refill the tank. But I couldn’t decide where to put the pump. Speaking of which, I went through 11 bottles of liquid today (24-28oz) during the ride. 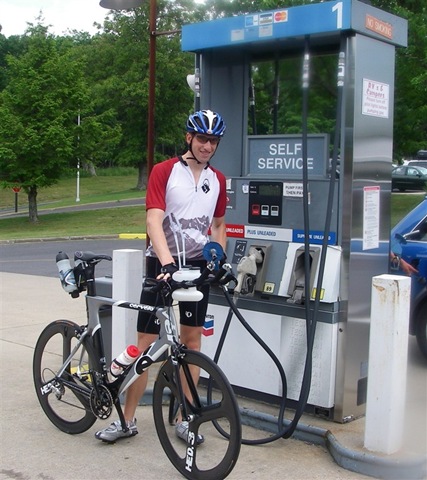 Oh, while I was descending I was thinking about what would be worse: Hitting a squirrel (again), or hitting a deer. I decided that if I had to hit an animal again above 25MPH, I’d rather hit a deer. See with a squirrel, when I hit it I will likely fly off the bike and direclty into the concrete (I got lucky once, but I’m not going to get lucky again). There’s no getting around it – once I leave the bike and become airborne the only place I’m going to go is onto the concrete…at 25-40MPH. 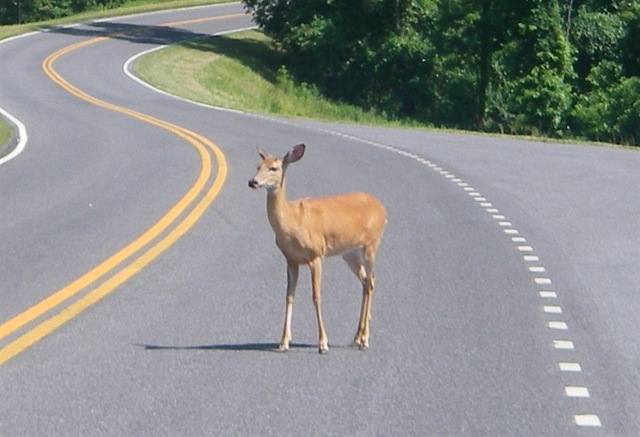 But a deer – if I broadside it, will act kinda like a big airbag. My bike will crumple (but I’ll lose energy in the process), and then my body will likely hit the deer. Now assuming I don’t go over the top of the deer, I’d stop fairly quickly (but at a lower velocity). If I go over the top – then I’m no worse off than the squirrel situation, except maybe a few MPH slower because of the initial airbag.

Now, it should be clarified that if I rear-end the deer and end up impaling myself up the deer’s ass – that would be less than ideal. Just sayin’. 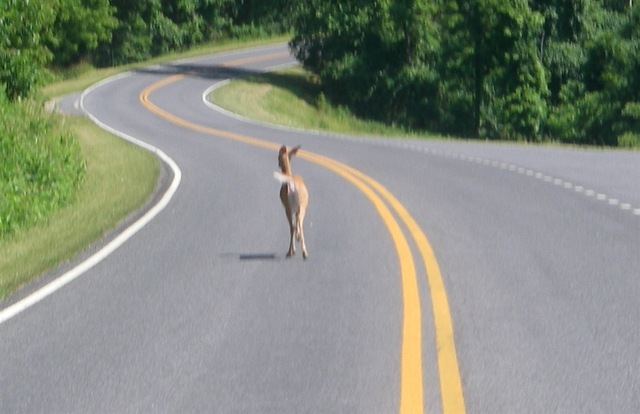 Also, I haven’t come to a conclusion on whether hitting a bear would be better or worse than the deer. It’s a fairly low to the ground animal – so my chance of going over the top are higher. Btw, I saw another bear a few hours later. Yogi was MUCH bigger than Boo-boo, so I just kept on going and only took a quick photo.

I also learned some interesting things about descending and wind gusts. I found that even when the cross-winds pickup and your brain says “Sit up, apply brakes and slow down”, that if you get into the most aero position possible and really squeeze into the top tube – the ride is smoother. It’s very counter-intuitive because if I hit side gusts at say – 30MPH, the last thing my brain says to do is become a bullet and accelerate quickly to 40+MPH. By the end of the ride I was starting to get the hang of it (or just wanting to finish so badly I lost my ‘common sense’ chip). 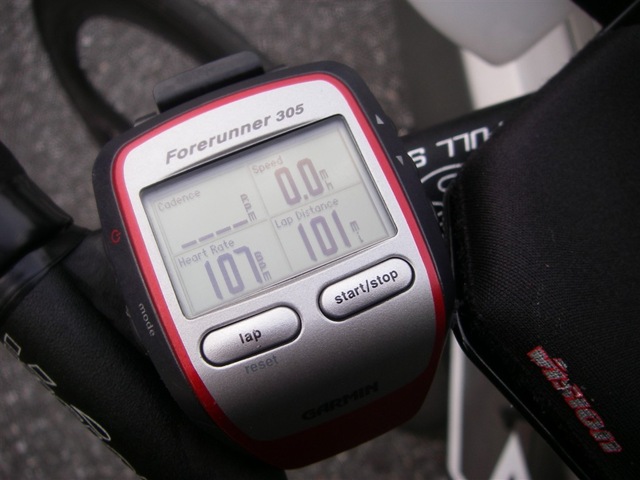 (Miles is in the lower right hand corner)

Afterwards, I set out to knock off the usual 5K brick run. I neglected to remember how darn hot out it was at the lower altitudes. Plus, I think I need to increase my calorie intake during the bike a bit – I was feeling a bit ‘empty’ by around mile 80. No worries though, I’ve got two months till Ironman, and plenty of more century rides and bricks to get everything sorted out. Onto the weekend!