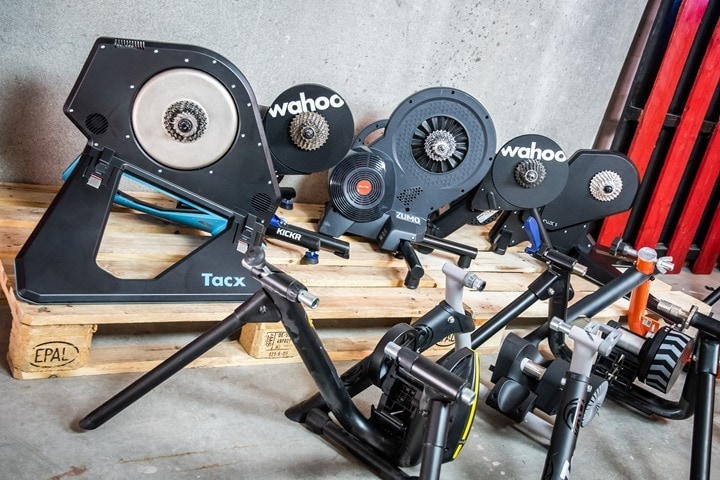 Wahoo’s KICKR Bike with Built-In CLIMB: Everything you ever wanted to know

*** Check out the Wahoo KICKR Bike In-Depth Review Here*** In a move that probably shouldn’t surprise anyone– Wahoo has joined the indoor smart bike fray, with their new KICKR Bike. This unit is far more than just a KICKR and … Read More Here →

Almost exactly two years after announcing the Wattbike Atom, the hard to get indoor smart bike is finally going to be available to purchase in the US. The company has made significant tweaks to the bike in the last two … Read More Here →

Stages is the first company at Eurobike 2019 to bring a new smart bike to market, though, it’s hardly the first smart-ish bike they’ve made. In fact, it’s likely nobody in the world is more familiar with connected bikes than … Read More Here →

Update: My complete Tacx NEO 2T In-Depth Review is now available here! Hit it up for all the details after months of testing! At Eurobike this year Tacx has announced their latest update to the Tacx Neo Series, with the … Read More Here →

While Eurobike doesn’t officially start for another 15 hours, Elite is joining Saris in getting a jumpstart on things, this time on Eurobike Eve. Elite has just announced three new products – the Elite Direto X (this post), the Elite … Read More Here →

CycleOps…err…now Saris is getting a bit ahead of the Eurobike show announcement flood by starting early. Today they’ve announced three new products. First, is this post – the Saris H3 (Hammer 3) trainer. This trainer gets a bit quieter while … Read More Here →

In the indoor training world there are roller people, and there are trainer people. It’s sorta like politics or religion. Fighting with one camp over the benefits is mostly futile. The only people who benefit from such discussions are the … Read More Here →

From the first ride to the initial power accuracy, plus sound levels and more - I dig into what may be the best value trainer of 2019. Read More Here →

While the company is no longer in business (and still, nobody seems to know who purchased the CompuTrainer assets specifically from RacerMate), there are undoubtedly many CompuTrainers left in service out there. And aside from a handful connected with the … Read More Here →

Update: The CycleOps H2 has since been replaced by the Saris H3, though frankly, the only meaningful difference is noise. Here's the link to my full H3 in-depth review. This past summer at Eurobike, CycleOps somewhat quietly announced their new … Read More Here →

(** Update: the Tacx NEO 2 has since been superseded by the Tacx NEO 2T. Check out that link for the most up to date information on this Smart Trainer line up!**) While the Tacx NEO 2 was the last product … Read More Here →

It’s that time of year again: Indoor trainer season. Though in reality, that’s actually not terribly true these days. With indoor training apps and the entire experience becoming more and more immersive, more and more people are using them all … Read More Here →

Update: Skip over and see my full in-depth review of the Tacx NEO 2 (or now, the NEO 2T review), where I've got tons of testing data and final conclusions. Squeaking in just under the wire for the 2018 … Read More Here →

It’s been a bit over a month since Tacx first announced the Flux S, which despite looking similar at a distance to the also newly announced Flux 2, is indeed different. Aside from price (the Flux S is $749USD and … Read More Here →

(** Update: There has since been a Tacx Flux S In-Depth Review. Follow the link for the most up to date information**) Last week at Interbike, Tacx announced the Flux S, making it the second Flux trainer announced in almost … Read More Here →

Update - December 2019: You can find my full Kinetic R1 In-Depth Review here! Which is packed with plenty of real-world details after months of usage. And just like that, Kinetic has joined the direct drive trainer flotilla. But unlike … Read More Here →

Can the KICKR CORE save you $300 over the regular KICKR? I dig in for all the pros and cons, from accuracy to road feel, apps and more. Read More Here →

It's Wahoo's first totally silent trainer - but is it worth an upgrade? Plus - how well does it work with Zwift, TrainerRoad and other apps? Read More Here →

I’ve written many in-depth reviews over the years. Trainers, GPS watches, action cams, drones…and yes, even a blender once (I still have the blender, it’s awesome). But, never a fan. But there’s a first time for everything, and today is … Read More Here →

[Update - June 2019: At this point I do not recommend this trainer. While the feel is good and mostly it's fine, it is inaccurate in ERG mode (structured workout mode). It is fine in simulation mode, which is what … Read More Here →

Here's your first dive into all the details on the new Wahoo Fitness KICKR CORE, from accuracy testing to sound/volume testing, plus feature comparison to the existing KICKR 2018. Read More Here →

I anticipate the cheapest sports technology gadget I’ll release a review or early look on here at Eurobike 2018 will cost about $60. But perhaps I’ll end up finding something that fits into my realm for cheaper.  What I don’t … Read More Here →

Last year at Eurobike Tacx announced their intentions to make a smart bike, the blend of an indoor trainer and a bike. Similar to a ‘spin bike’ in looks, but under the hood totally different.  It’d have full resistance control … Read More Here →

How well does Elite's high-end trainer handle apps like Zwift and TrainerRoad? I dig in with all the detail to see if it can stand up to it. Read More Here →