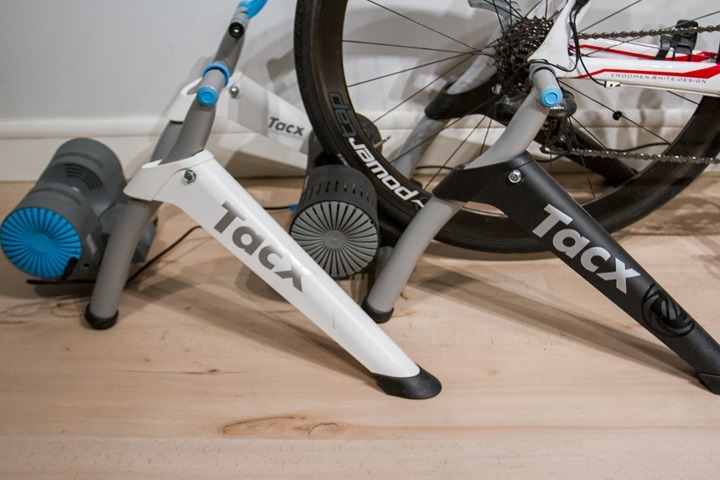 The trainers are attractive in that they support dual ANT+ and Bluetooth Smart broadcasts.  This means that any ANT+ capable head unit (be it a Garmin device or a PowerTap Joule) can pickup the signals.  Similarly, any Bluetooth Smart device (such as those from Polar and Suunto) could conceivably pickup the broadcasts of power, speed, and cadence.

The challenge however, was that while the Tacx Smart trainers (Bushido, Vortex and Satori) broadcasts open ANT+/BLE, they didn’t allow for control of the trainer.  Instead that required the Tacx suite of applications, albeit available on Android, iOS and PC.  That also meant that one couldn’t use any of the 20+ applications that supported more open control, like that of the Wahoo KICKR.

With the Tacx FE-C control though, that fully changes.  This is in some ways one of the lesser kept secrets out there, with some news slipping out by a 3rd party back a number of months ago as to the planned support.  Still, it’ll be much appreciated by many given the lower prices of the Tacx trainers. 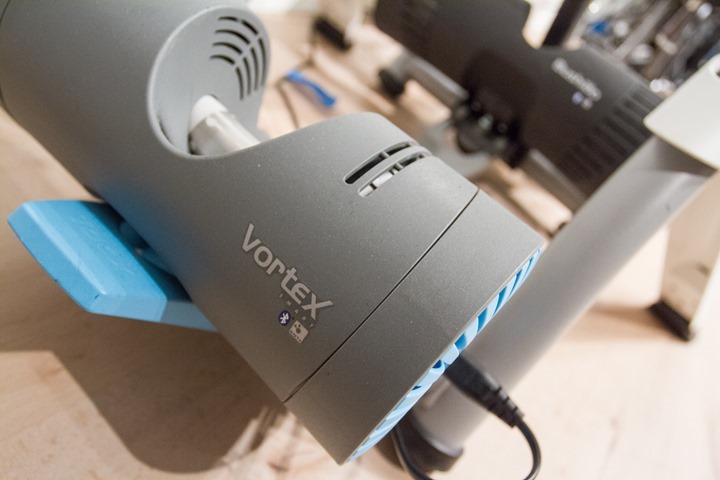 Tacx has rolled out control within their Smart series of trainers that support resistance control.  This means that these trainers can have the resistance dynamically changed by apps as those apps see fit.  For example, if you’re climbing a hill, the app will automatically change the resistance.  Similarly, if you’re doing interval workouts the trainer will automatically iterate through different wattages.

Why not other trainers? Well, Tacx has said that their other electronic trainers (such as their Genius and non-Smart series) don’t have enough channels on the older ANT+ chips within them to enable control.  Similarly, for cheaper trainers such as their Tacx Satori Smart, that doesn’t support automated (computerized) control, since it has a cable control mechanism – so that’s not supported either.

To summarize, the following trainers are not supported:

So how do you upgrade your trainer? Via a simple app. Tacx today released a new utility app called ‘Tacx Utility’, this app connects to your Smart series trainer and updates the trainer’s firmware.  Once upgraded, then 3rd party apps that support the ANT+ Trainer Profile can control it as they see fit. 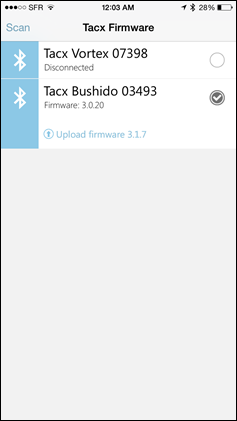 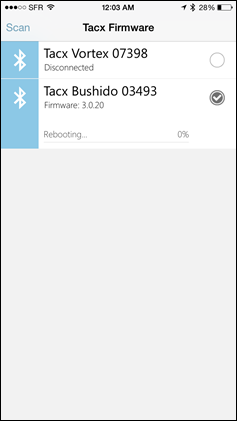 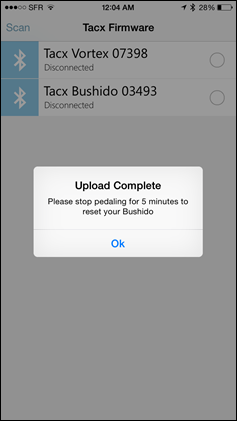 As for Android support, that’s coming shortly – Tacx is aiming for the end of June to have that complete.  If you look back to other companies that initially supported firmware updates wirelessly, such as Wahoo Fitness, it was similar with iOS first.  As I noted then – if you lack an iOS phone yourself, simply offer an iOS friend a beer in exchange for the few minutes to upgrade your trainer.  You only need it for the initial upgrade.

One of the challenges that I’ve complained about with the ANT+ Trainer Control support is that it not only lacked any trainers, but lacked any apps to support it.  Thankfully, Tacx seems to have knocked out two birds with one stone.  Not only did they release the firmware update today, but the three big apps in the trainer profile space have also announced near-immediate availability of support in their lineup.

Trainer Road: Their update will allow both iOS and Desktop control of the Tacx Smart series trainers in the next few days.  They plan to roll out support later today (Tuesday).  At the same time, they’ll also release support for their desktop app control.  You can see this below.

Trainer Road is known primarily for their power-based workouts.  With this release they’ll support the ability to control the Tacx trainer for any of the workouts they have.  This includes both workouts with videos (i.e. their SufferFest videos), as well as ones without videos.  As with virtually all other electronically controlled trainers, Trainer Road supports calibration of the Tacx Smart units as well. 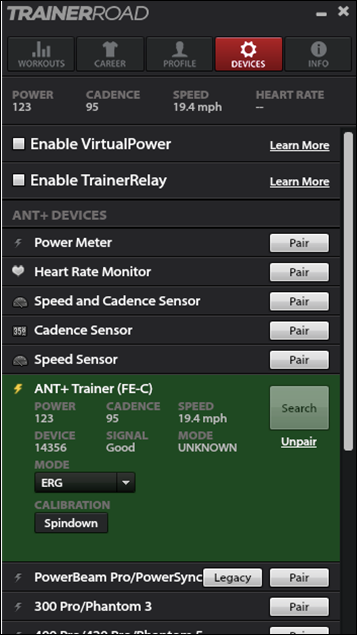 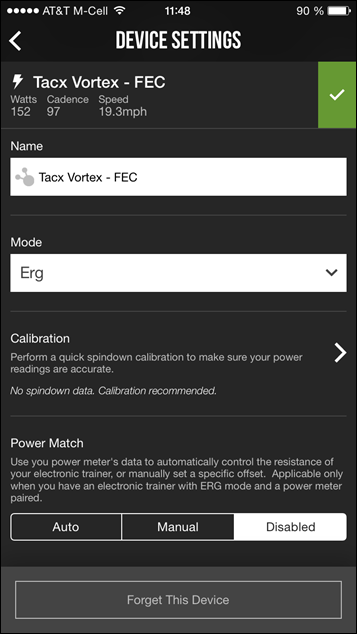 Kinomap: Longstanding trainer app Kinomap has also added this in effective this past Thursday, primarily on the Android side where ANT+ connectivity is a bit cleaner/easier to achieve than on iOS.  With iOS they’re still working through what level they’ll support it, though it sounds like direct Bluetooth Smart control is likely to happen (since the Tacx Smart trainers support that).

Whereas on Android there are numerous phones that have built-in ANT+ connectivity, such as the majority of recent generation Samsung phones.

Zwift: Finally, we’ve got Zwift.  Zwift quietly implemented support for the Tacx trainers a while back – though you wouldn’t know it otherwise.  As long as you upgrade your trainers firmware first, you can then scan for the trainer using the usual Zwift option, which will in turn find the trainer and allow you to control it.  Super simple.

Zwift is most well known for their massive online multiplayer 3D world that’s attracted thousands of cyclists (or tens of thousands by Zwift’s released numbers).  You can earn points and prizes based on your interactions within the environment and other players.  They recently announced switching to a public/open beta program – meaning you no longer have to wait in line for an invite.

PerfPro: Just as a quick post-publishing update, I received confirmation from the folks behind this popular trainer app that they’ll support the ANT+ FE-C (and thus by extension the Tacx Smart Trainers) in their next update.  Definitely good news – especially so for the many cycling studios that use this software for multi-person sessions. 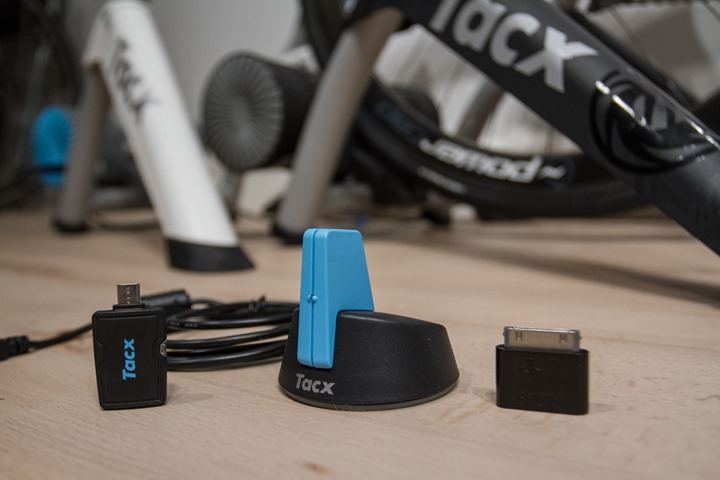 There’s no doubt this is a massive move for Tacx.  They’ve had some extremely competitive trainer offerings price-wise with the Bushido & Vortex Smart, but their app software has always been a bit of their Achilles heel for the company – causing some users to look at more open options (mainly the Wahoo KICKR, but also the CycleOps PowerBeam Pro).

With the open ANT+ FE-C though, that will quickly enable more than just these three major trainer apps to support the Tacx trainers.  In fact, I can’t foresee a scenario at this point where all of the 20+ apps don’t have FE-C support by the Eurobike/Interbike timeframe.  There’s just no reason for them not to, especially since it opens up such a huge customer base at a lower price point than any other trainers.

Now, I do expect there will probably be some growing pains over the next few months – but hopefully Tacx will iterate quickly, ensuring that by time the North American trainer season hits this fall, things are smoothed out.  The more apps that sort out those issues now, the cleaner it’ll be later.

As for other trainer companies adopting the standard?

Well, Elite has long-committed to it for a large chunk of their resistance-controlled trainers.  They had initially said by the end of December, then January, then February – and then finally said they were pushing it till Summer in preparation for the 2015-2016 trainer season.  I’d imagine that the Tacx move will get that settled out rather quickly.  In the European market the two companies compete head to head much more than in the US market.

Then you’ve got BKOOL, another mid-cost player.  And also another one that’s long since promised it. In fact, BKOOL committed to it before everyone else – even demoing it years ago.  Yet, they’ve since backed away from any commitments, angering numerous folks who purchased units based on those statements, in the process.  While their BKOOL apps support the FE-C control protocol, their trainers themselves do not – effectively locking you into the BKOOL software.  At this point, there is little reason to buy a BKOOL trainer over a Tacx trainer.

Finally, you’ve got CycleOps and Wahoo.  In many ways, they already offer much of what the FE-C aimed to provide – an avenue for apps to control trainers.  Both companies readily gave developers access to control their trainers – and as we saw last year, developers took advantage of that – adding support for both trainers quite widely.  So while it’d be easier for 3rd party developers if all trainers used the same protocol, I’m not sure it’s really a high priority for either company at the moment.

Oh – as for trainer recommendations in general, it’s just too soon there.  Most companies release trainers at Eurobike the last few days of August, so I’d really encourage folks to wait and see how thinks shake out then.  If you’re Down Under though and need something more immediate – I’d focus on either the Tacx Smart series at the mid range, or the Wahoo/PowerBeam at the higher end.