There's a newer model of this product. It's been replaced by the Garmin Forerunner 255 Music, you may want to check out that review instead. 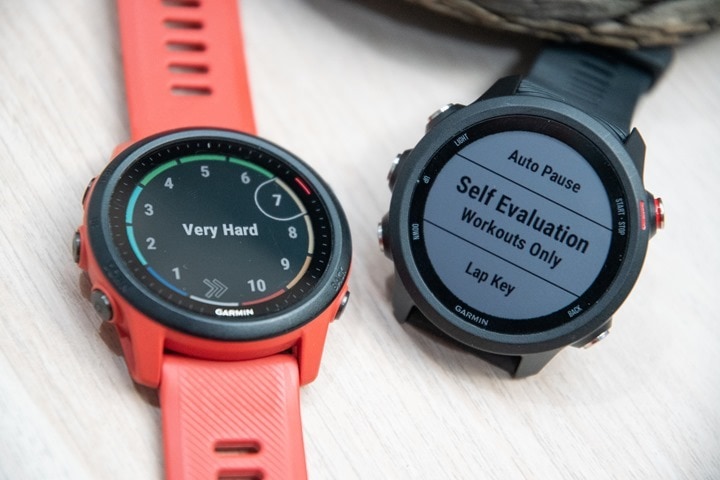 Just a quick item to start the morning off, but it appears Garmin rolled out overnight two beta firmware versions for Forerunner 245, Forerunner 745, and Forerunner 945 users that include long-awaited features from last fall, but also more recent features from the Garmin Enduro in the past few months. Both of these are being released as a public beta, so you can go download them if you want. For this cycle, I don’t expect the public beta will last too long – meaning if you don’t want to try beta software, I don’t think you’ll be waiting long for the production releases.

Here’s what each of them is getting (the links are there to download the beta versions if you want):

Now, most of these things are ones that we’ve seen before on other watches. As a quick refresher:

However, the perceived effort tracking one is new to the best of my knowledge. First, you’ll need to enable it, within the settings of swim/bike/run activity profiles. It’ll show a new option called ‘Self Evaluation’: 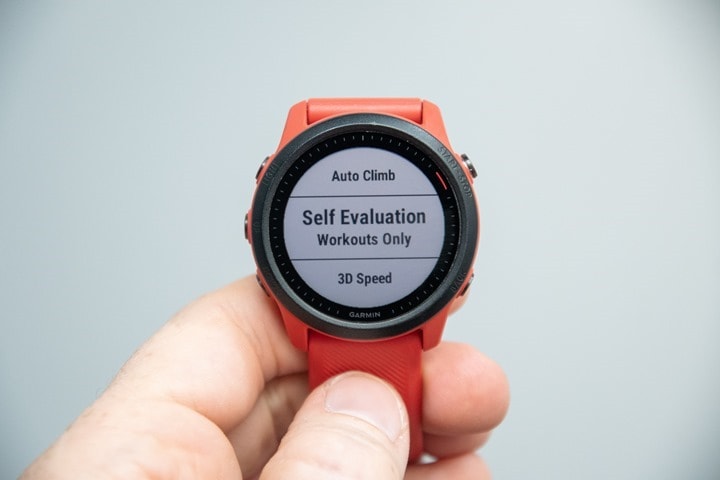 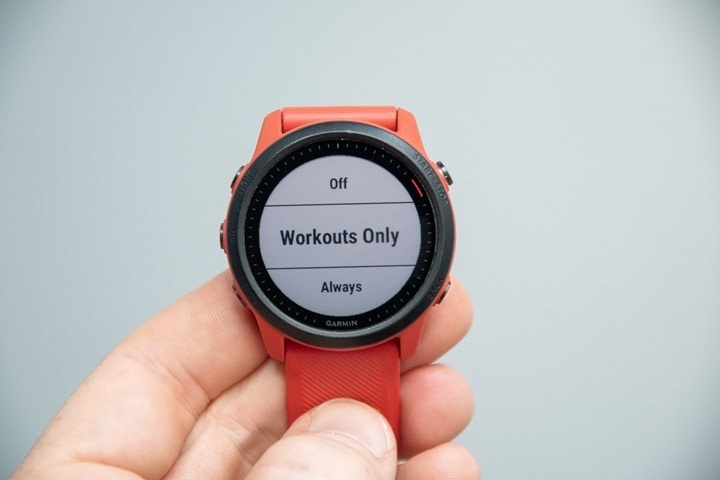 Once enabled, anytime you press save, you’ll get two quick rotary-style question prompts to rate your workout and how you felt. Because I haven’t gotten to my workout yet today, here’s a quick 2-second test activity. First, you’ll choose a grade between 1-10, with the colors getting more ‘intense’ as you go along. Then you’ll choose from non-colorful smiley faces. Apparently they ran out of Crayons in the box at this point: 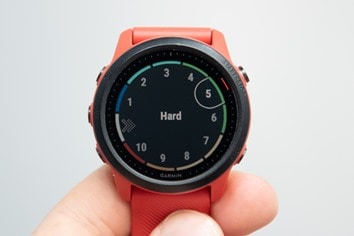 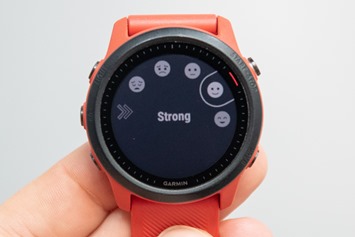 That’s it. At that point it gives you the workout summary like normal (meaning, this is immediately shown upon pressing save, but before you get things like total distance and such). This is relatively similar to what Suunto introduced a number of years back, I think on the Suunto 9, but it might have been the Suunto Spartan series. Either way, a long time ago.

Afterwards, on Garmin Connect and Garmin Connect Mobile, you’ll see these ratings displayed there. As I said, this was a very intense workout for me, all 2-seconds of it: 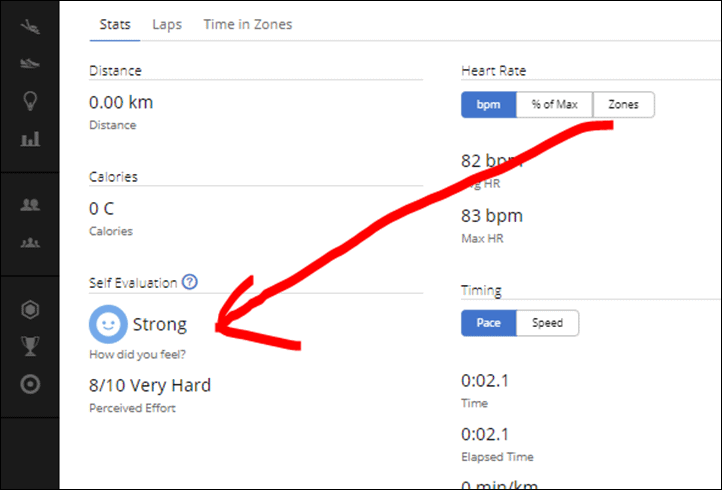 Now, I was hoping this might come through to TrainingPeaks, but alas, it doesn’t. At least – not yet anyway. This would be super helpful for coaches if it did, helping to bridge the gap between athletes that fill in complete “how the workout went” details after every workout, versus those athletes that don’t bother to do anything and let the coach try and use his or her imagination. This seems viable middle-ground. 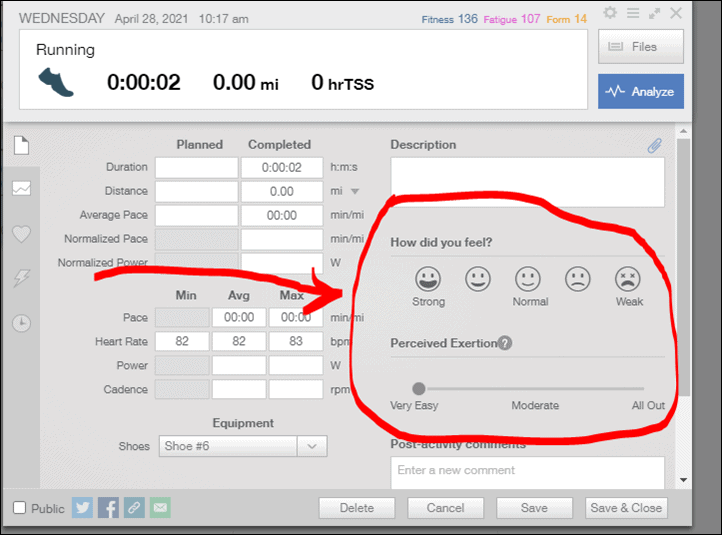 Meanwhile, on sleep tracking, it’s nice to have this back on my Forerunner 745. When I first started testing the FR745 last August it was there, and then it got pulled out at the last second to fix issues. I’ve had it again lately while testing the Venu 2 series, and it’s handy. I loaded up the beta last night on the Forerunner 745, and then went to bed.

(Somewhat interestingly/cool, Garmin did actually pull down the previous night’s sleep data into the watch to display in the watch, which was from the Venu 2. Kinda neat.)

In any case, here’s what it showed this morning, after my children decided to actually sleep-in for once. This is down in the widget glances roll: 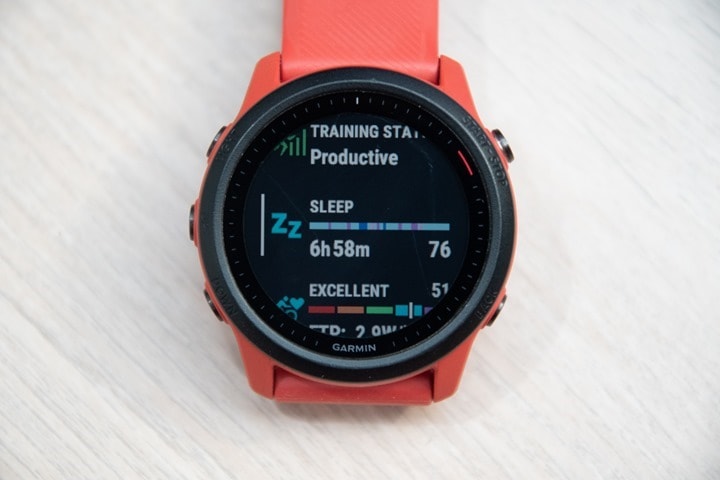 And then I can tap on that specific widget to see a gallery of sleep details:

Again, no different than what we saw with Enduro, Fenix 6, or the Venu 2/2S.

However, there is that aforementioned difference with Body Battery. With the Venu 2/2S last week, they’ve rolled out a new algorithm that basically more heavily weights your sleep (or rather, lack thereof) into the Body Battery calculations. Said simply: It’s far harder to get to 100% ‘re-charged’ on a mediocre (or crappy) night of sleep. I showed this in the Venu 2 review with data on relatively similar sleep-quantity/quality weeks, in how rare it was to get to/near 100% with the new algorithm:

In the case of last night with the Forerunner 745 and the new Body Battery algorithm, I continued what I saw with Venu, in that I only topped out at 71%, versus this amount of sleep on the previous firmware undoubtedly would have given me a champion-level 100% score.

Ok – with that, I’ll let you go off and update to the beta build if you want, or not if you plan to simply wait till the production builds go out. Updating to the beta build takes just a couple of minutes (but does require a computer to copy the file over). As always, beta versions can have risk, though in this case I think that risk is pretty darn low. Still, if you’ve got some big race this weekend or something – never use beta firmware for your ‘A’ races.

(And side note: If using the Forerunner 245 or 245 Music, make sure you click the correct link above for whether you have Music or not-Music versions. It won’t hurt your watch if you grab the wrong one – it just won’t update. Trust me, I tried…)

At the end of the day, I’m an athlete just like you looking for the most detail possible on a new purchase. These posts generally take a lot of time to put together, so if you're shopping for the Garmin Forerunner 245, Garmin Forerunner 745 or Garmin Forerunner 945 or any other accessory items, please consider using the affiliate links below! As an Amazon Associate I earn from qualifying purchases. It doesn’t cost you anything extra, but your purchases help support this website a lot. Even more, if you use Backcountry.com or Competitive Cyclist with coupon code DCRAINMAKER, first time users save 15% on applicable products!