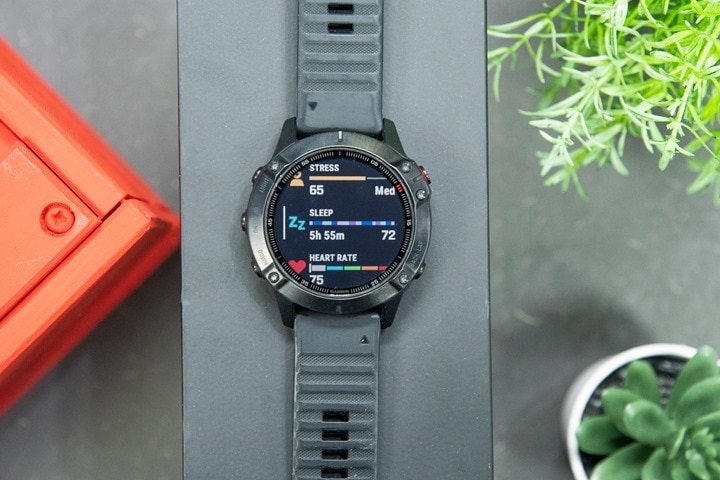 On the list of things that I didn’t think would be all that exciting, I’d put forth ‘Widget that shows my sleep from last night’. Turns out, I was wrong.

Turns out an overwhelming number of you were interested in this. As in, flooded my Instagram DM box about it. So naturally, I decided to write a post on it instead. Oh, and a video. All you need to know in about 5 minutes!

But if videos aren’t your thing, just keep scrollin’. 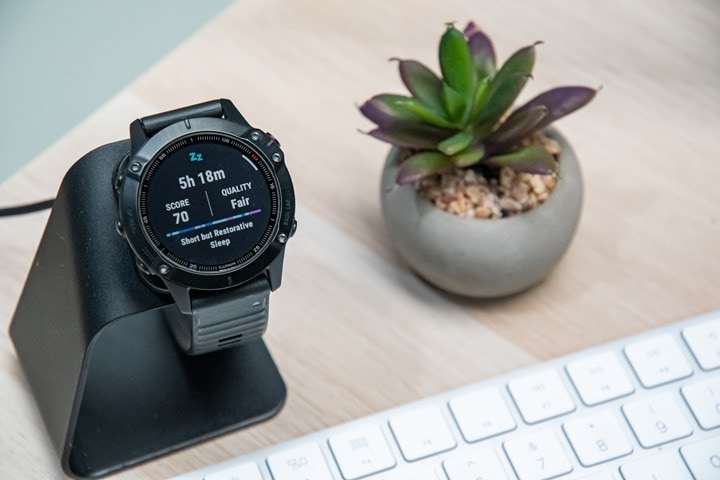 Ok, my goal here isn’t to write too much. Likely, I won’t succeed. Also, since I know you’ll ask – that’s the $14 Garmin watch charger stand. I’ve been using it since last year after the other watch charging puck thing y’all went crazy for.

In any case, Garmin has released a public beta firmware update for the Fenix 6 series (all of them, and the MARQ series), that brings sleep functionality from previously being an app/cloud function/calculation to being an on-watch calculation. As such, you can now also see your sleep metrics on the watch. The update brings some other widget-related tweaks that are largely user interface related. They’re nice too, but I’ll skip them for now.

(I’m not going to do a step-by-step on how to install the beta update, because those steps are already here. As always, if you’re not comfortable with beta software, then I’d wait till this magically shows up on your wrist as part of a normal update. Of course, given nobody is doing any races right now – it’s probably as good a time as any to try new things out. Also, if you do run into bugs, there’s a special e-mail address to report them, or the forum thread.)

Got your firmware all updated? Good.

Ok, with that done, here’s what you’ve got from the mini widget roll: 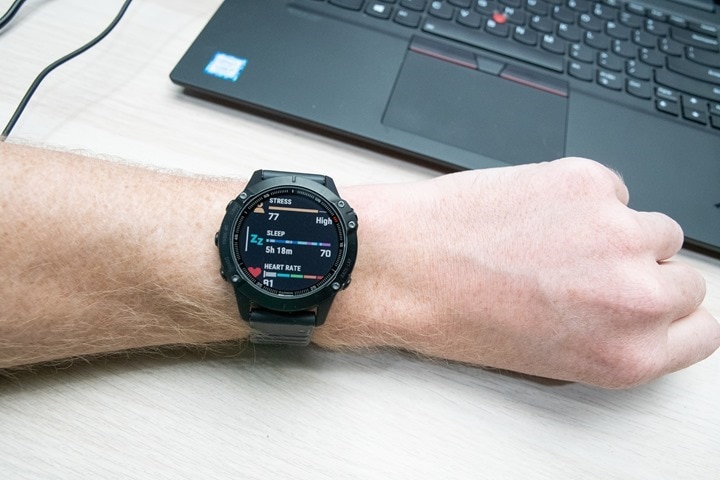 You can then press to open it and get a summary of your night’s sleep: 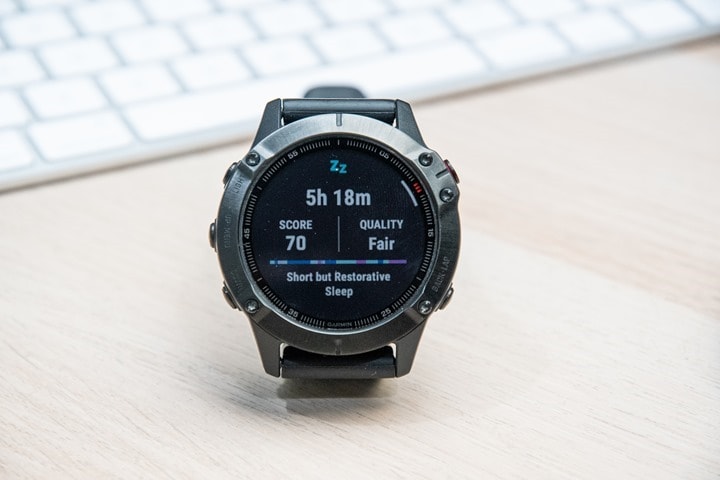 Next though, you can press down within this widget to get more details, which includes the timeline for the night in terms of sleep stages: 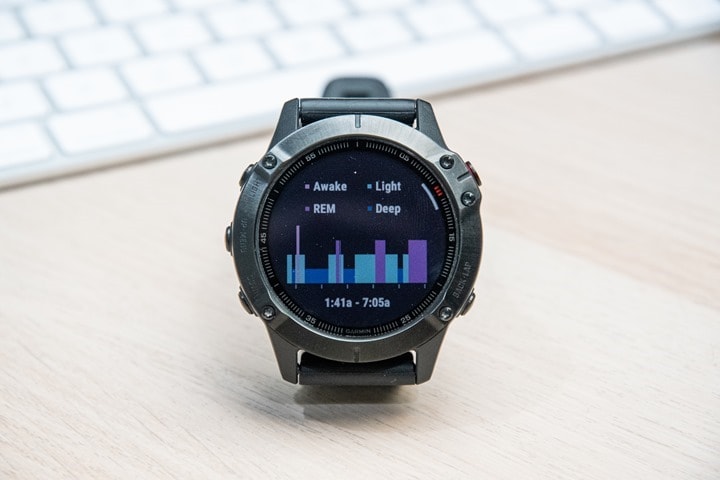 Press down again and you get roughly the same set of data, just visualized differently with the exact times in each sleep stage. As always, I have no meaningful way to validate these exact sleep stages, so, like all wearables we’ll basically just have to go along with it for now. About the only one I can validate is ‘awake’ time, and in this night’s sleep – that seems accurate. 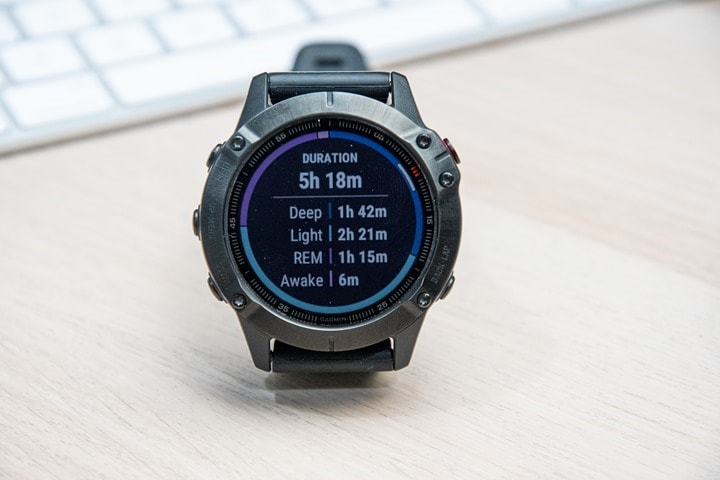 And finally, we get a bit of that elevator pitch again, though with a slightly different twist: 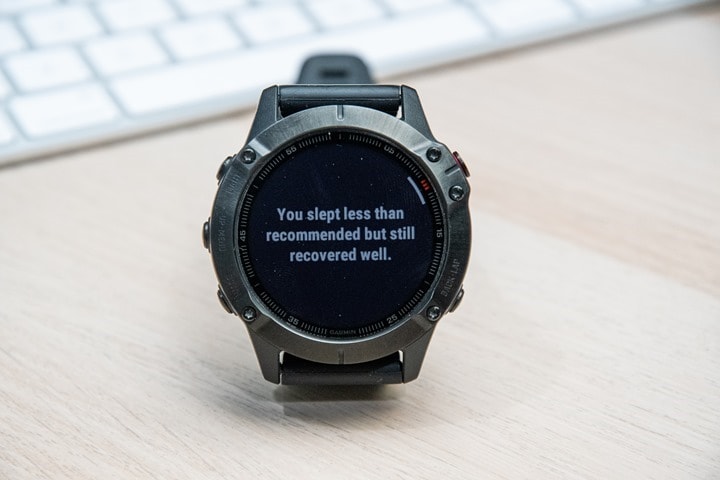 However, behind the scenes there’s actually a substantial change. See, up until this point all of the sleep calculations occurred on Garmin Connect (the web platform), using Garmin in-house calculations. But with this change, the company has shifted all of this onto Firstbeat for the different components. So, on a watch like the Fenix 6, Garmin leverages (pre-sleep) 18 different components from Firstbeat. For example, VO2Max calculations are one component, Training Load is another, Body Battery another, and so on. The exact names that Garmin uses marketing/branding-wise can vary from how Firstbeat licenses the underlying modules.

– Sleep Detection Component: This is where Garmin gets the time you fell asleep and woke up, as well as the sleep stage detection (Awake/Light/REM/Deep)

– Sleep Analysis Component: This takes the Sleep Detection bits, and then analyzes the components to determine a sleep score and a small text explanation. Additionally, the ‘restorative quality’ (e.g. good/fair/etc), is based upon HRV. HRV is also used to determine/show the Stress & Body Battery bits elsewhere in the watch (also FirstBeat features).

– Sleep Coaching feature: This will, in certain cases, give you an additional insight tip following certain sleep events. For example, if there were high levels of stress, the unit might say “High Stress levels from the previous day impacted your sleep”. Note that this isn’t an every day thing at this point, but only triggered in certain events.

Note that there are other standalone features that Garmin isn’t leveraging. For example, there’s the Sleep Quality Assessment module. But Garmin is basically getting that data from the Sleep Analysis feature, whereas the Sleep Quality module is used by Suunto for the Suunto 3/5/9 watches.

All of this is somewhat setting the stage for deeper insights, at least in the eyes of Firstbeat and how they market the sleep suite of products. The idea that you could take all this underlying sleep data and then give *specific* training focused recommendations based on that sleep. In other words, if you got three hours of crappy sleep from a redeye flight or screaming babies, it’d say ‘Skip the run tonight’, or ‘Make the run a bit easier’ or such. You can see a rough demo of that concept on the Firstbeat site. The pieces missing today though are specific training recommendations from that. 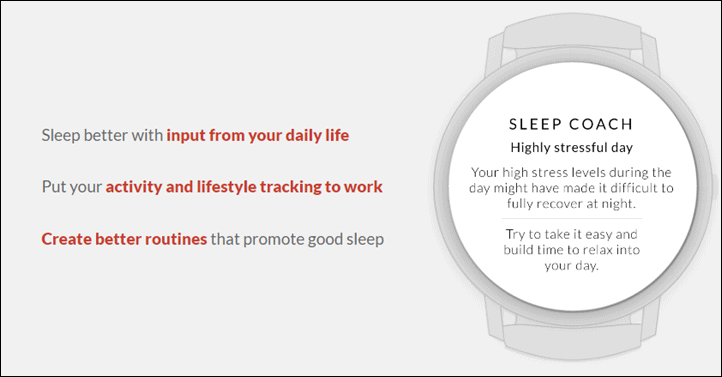 So what’s the ramification of this change? Usually, I’d say that having Firstbeat metrics is typically better than homebrew metrics, since Firstbeat has far more experience in this realm, and often does actual validations of their metrics (and publishes whitepapers). Whereas most times wearable companies spitball the data and hope it works.

However, in the case of Garmin, that’s a bit different. For them, they’ve got almost a decade of sleep data across what is likely now 20+ million sleep-tracking devices out in the wild. As such, only a handful of companies would have larger sleep datasets than Garmin. Namely Fitbit with over 100 million devices shipped and 28 million users, and then more recently Xiaomi/Samsung/Huawei. Apple doesn’t track sleep. And as Garmin’s fitness sales continue to accelerate, that’ll only increase.

In the Garmin forums, they’ve noted that they’re interested in feedback (good or bad) on peoples’ experiences. In my case over the last 4-5 days, it seems mostly a wash. But the challenge Garmin will face is simply a game of numbers at scale. If even just 1% of let’s say 10 million active users have a weird sleep data going forward, it’ll mean 100,000 people have bad experiences. [That 10 million number comes from last April 2019 when Garmin noted 10 million CIQ devices in the market, which means they have even more sleep capable devices that aren’t CIQ capable.]

Of course, Garmin is mitigating that, not just through the beta, but by minimizing the devices supported. Rather than rolling this back across nearly a decade of devices, it’s just focusing on its most recent ones – specifically the Fenix 6 right now.

But, what about others? I asked Garmin just that. Right now the plan is for it to come to all Garmin Fenix 6 & MARQ variants (beta already for that here), and then by the end of the year the Forerunner 945 will also get it. Hopefully we’ll see it expand more broadly than that. Given Polar has it on their $199 Polar Ignite, I’d think this would fit well on anything in the Venu & Vivoactive lineup, plus of course the Forerunner 245 series. 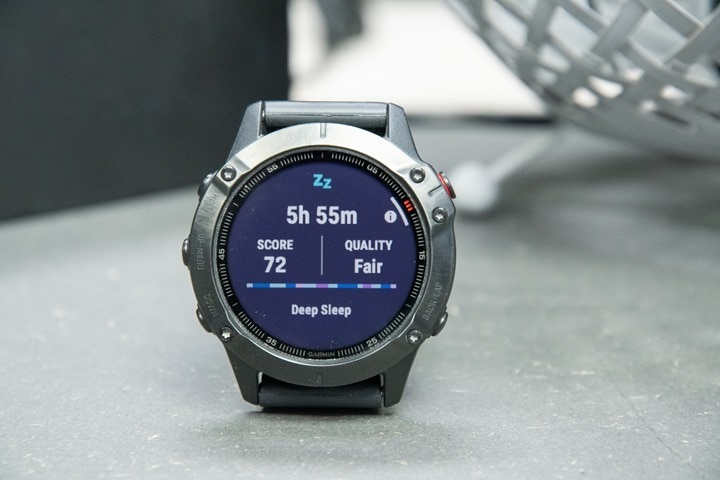 Now, what Garmin is doing here is hardly new. But is in line with trends. We saw Polar last summer really start to nail the on-screen sleep widget realm with the Polar Ignite (they had it prior, but not with as much detail), which they then carried into other watches like the Polar Grit X more recently. We also saw Fitbit do the same too, bringing sleep metrics to the wrist. And undoubtedly neither of these are the first to do so either of course. They’re just some of the higher profile ones that have refined it.

I don’t think this widget is make or break for anyone in terms of deciding what device to buy. But, like most of the features that Garmin adds – it’s ‘one more thing’. It’s fundamentally why their sales have boomed: It’s hard to compete with death by a thousand cuts.

I’ll probably only glance at it occasionally, though, with the widget glances it’s sorta the perfect scenario for it. And like countless other features on a Garmin, you may never use them. But that’s OK (as long as they don’t break something else). As your most favorite feature is someone else’s ‘Don’t care’, and vice versa. Which again, is why it’s so hard to break into this category with any meaningful sales.

In any event – if you’re the type that wants to live on the edge, go forth and download the beta and give it a whirl. There’s already been one updated firmware version since Thursday, and undoubtedly we’ll see more. There’s no hard and fast rule on how long things stay in public beta for Garmin. By the time it hits pubic beta, it’s already been tested internally at Garmin for usually months. So sometimes public beta lasts a week or so to validate nothing blows up, and sometimes public beta lasts months with numerous iterations.