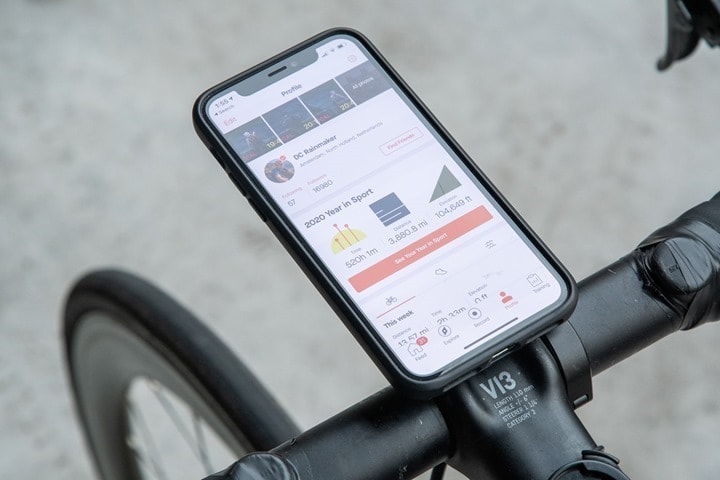 In less than 15 hours the Peak Design mobile mount system Kickstarter will end. I posted about this almost a month ago as part of one of my 5 Random Things, noting that the box of prototypes had arrived, and that I’d circle back in December. Thus, this post. A quick post, since if I took all day to write it, it’d only reduce the time you have to decide. Also, of note – I learned last night you actually don’t have to commit to a given model now. The company says (as does Kickstarter) that you can apparently just put the $1 down for the Kickstarter campaign now, and then when it ships next spring, pay the difference for which case/accessories you want (but still get the Kickstarter discount).

In any case, in the photography world, Peak Design is largely known for making high quality (albeit expensive) tripods and camera clips. I see their photo gear stuff in YouTube videos and such, but frankly, just can’t justify the costs for my use case. So my interest here was more simplistic: Does the cycling aspects of the mount system work as claimed?

So for the last 27 days I’ve been using the bike mount multiple times a day on my bike as I commuted about town, racking up roughly 75 minutes of riding per day with it across the not-always-so-smooth brick bicycle paths of Amsterdam. Ultimately, while I have put this on my road bike (and others have put it on their mountain bike), for my use case that’s not really the main driver here. I have dedicated bike computers for that. 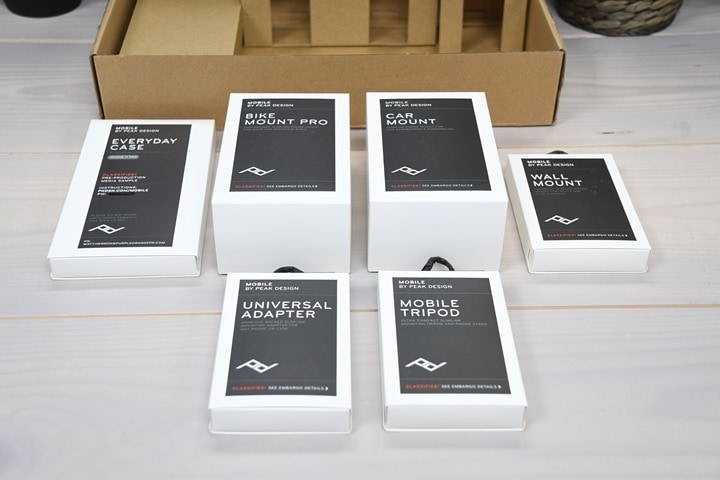 There’s like 11 different pieces to the Peak Design mount system, which is what makes it kinda cool. I suppose that’s the same for most mount systems. Since their site lists all those, I’m not going to dive through them all again. Plus, while I have virtually all of them, the driving ones and such didn’t really get any use since I lack a car.

Still, here’s a gigantic gallery of pretty pictures I took of the entire box worth of stuff:

Now, with that, let’s talk about the case first. In my case, it was for my iPhone 11 Pro. You can see here that it has this fabric-looking finish on the back/inside, while otherwise being a fairly thin case. 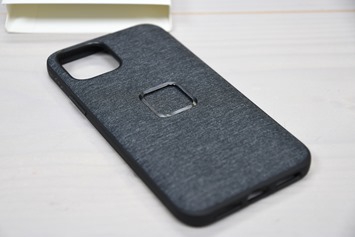 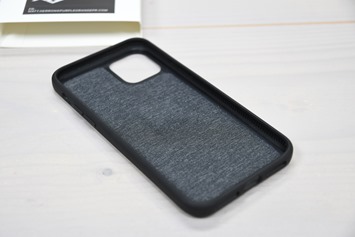 I’ve long used the QuadLock cases on my phone, and the biggest difference here is just how much thinner it is. I know it might not look like a lot, but it certainly feels like it at first. 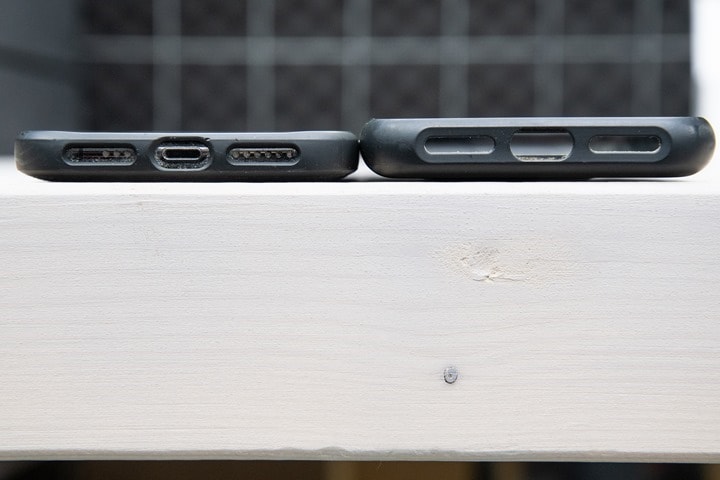 Also notable is that it sits flat on a design/table, whereas the Quad Lock one spins around (that matters to some people): 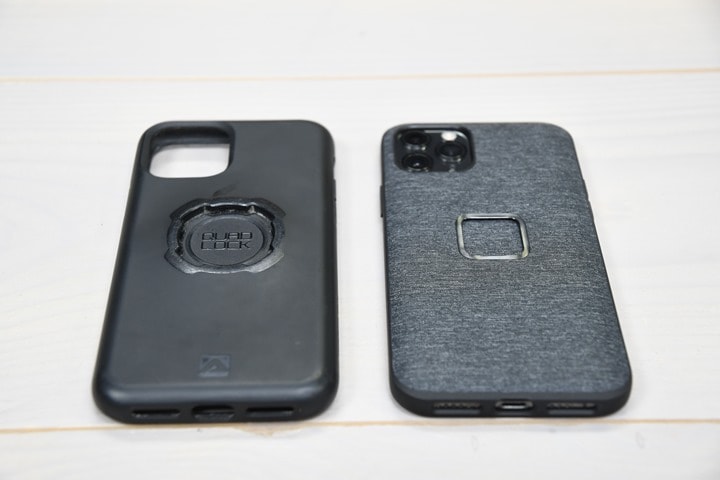 In the middle is a little divot, which is where there’s both a magnet as well as edges that the locking part of some of the mounts lock into (not all mounts have locks, just the ones where outdoors and high speeds occur). 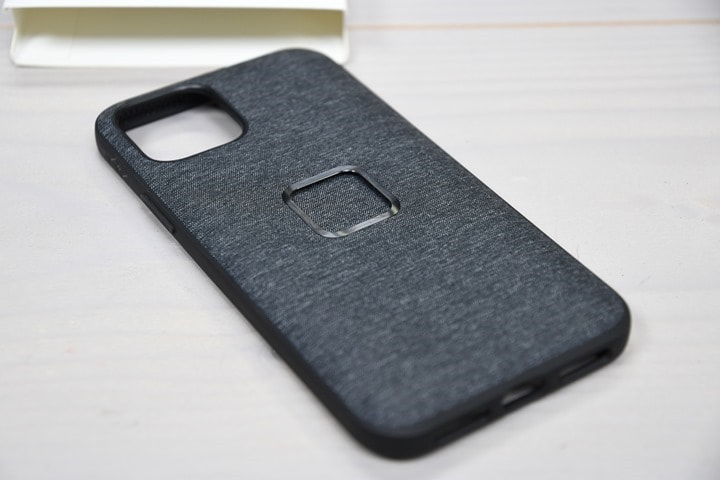 Meanwhile, over on the bike mounts, you’ve got the bit that sticks up and snaps into that. There’s both out-front mounts as well as a more temporary handlebar style mount (I didn’t have that one). 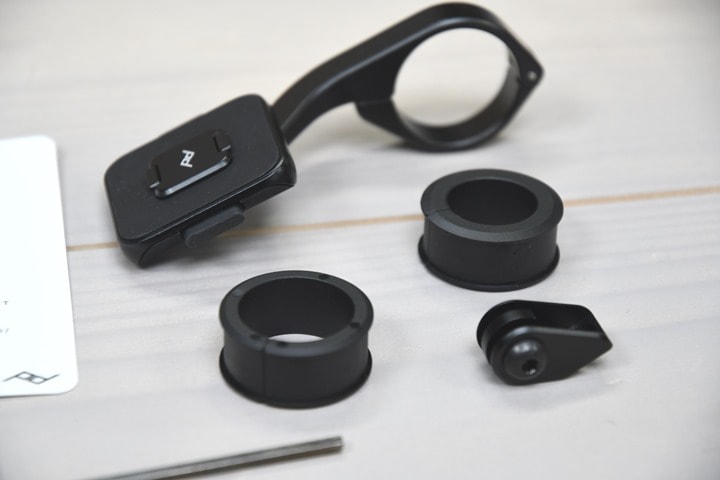 On the bottom of the out-front mount you can attach a GoPro adapter, which is included in the mount. This can be used for just about every action cam, or any other accessory which uses that mount type (like bike lights, and even some Di2 junction box adapters): 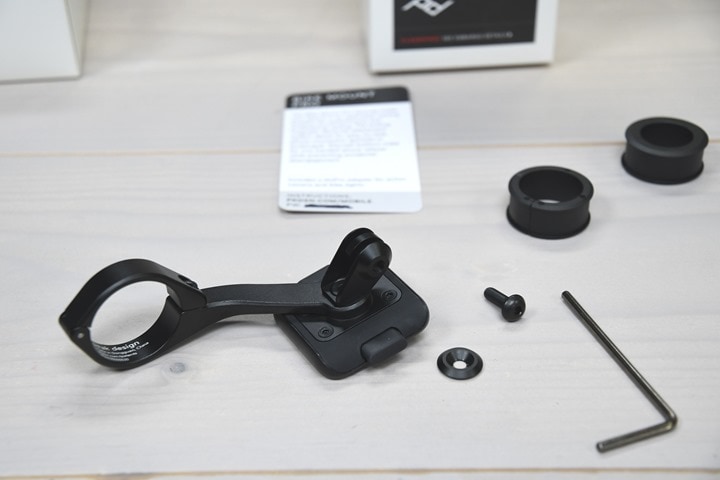 Here’s the whole kit all set up on a road bike: 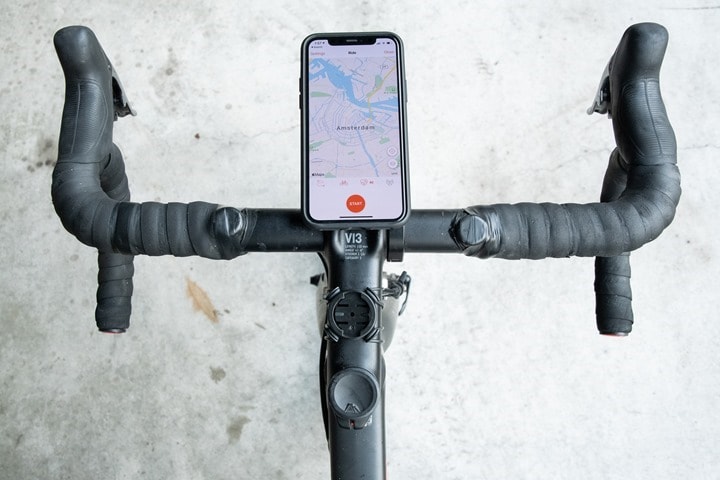 Or, you can rotate it horizontally, if you’re of that persuasion. 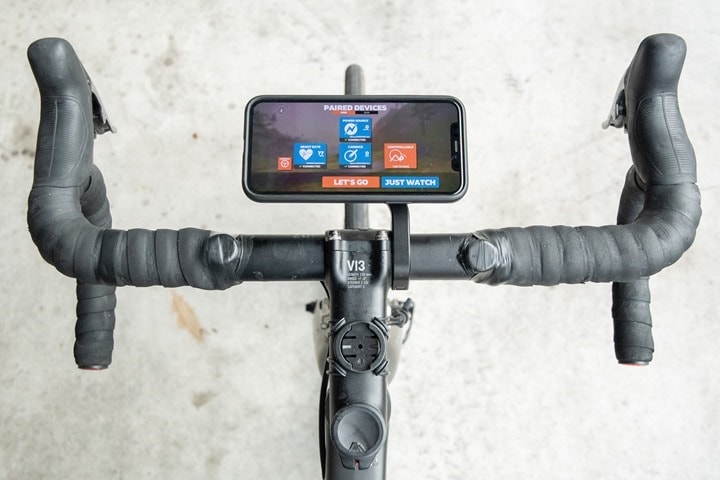 And here it is on my mainstay, the cargo bike: 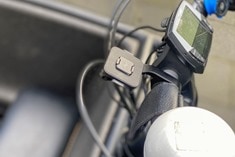 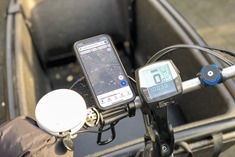 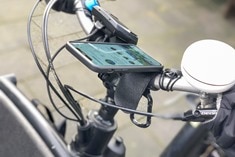 Unlike the Quad Lock mount system I normally use, this doesn’t require twisting or turning the phone to get it to snap in (which makes it better for tight spots). Instead, you just place it atop, and the magnets pull it in, where the locking system (for the bike mounts) then snap it in the remainder of the way, preventing your phone from being ejected. 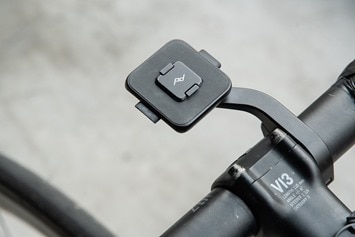 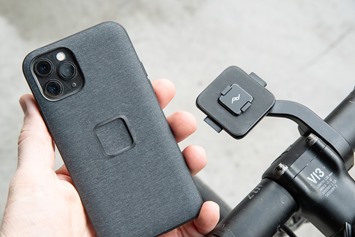 In order to release it, you’ll press on either of the two buttons and then simply pull up. I haven’t had any issues with most of my daily gloves, but if you’re using giant mittens or such, I’d imagine this would be tricky. Then again, so would using your phone. 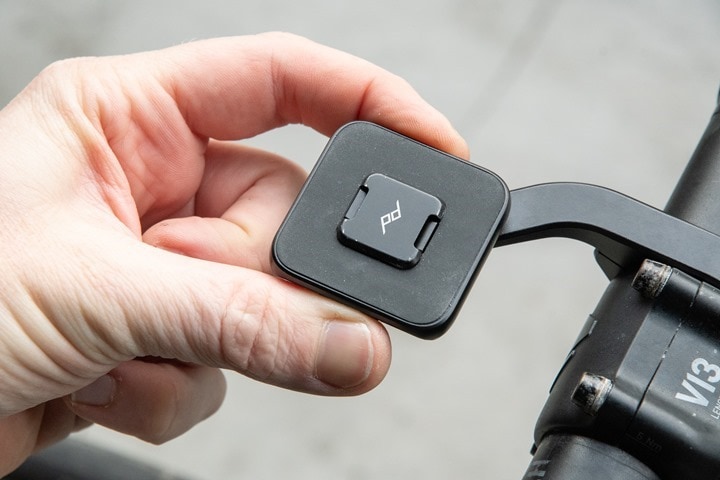 Now, I would point out that there’s a bit more play than I would like. Not enough that it makes any noise on rough roads, but just enough to be able to airgap it relatively easily. But given this is technically prototype hardware – I’ll give them a pass for now on that. I suspect it’s coming from the case-side divot is just about ~0.5mm too deep, so it gives it more flex. 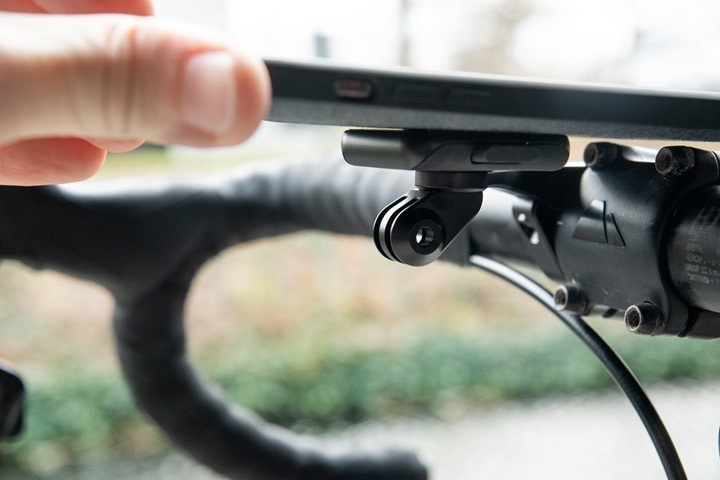 The final piece I want to briefly mention since I thought it was frankly the coolest piece, is this little tripod doohickey. It folds up to the rough length/height as a credit card, but then somehow extends out to hold your phone in an adjustable tripod:

In a non-COVID world where I’m travelling more, I’d use this all the time to set up shots or even record bits of video with it off to the side. I love the adjustability of it, including for use both vertically and horizontally. As well as how small it folds up, it’s been in my jacket pocket most of the last month – ready for use. But more on that usage in a second. 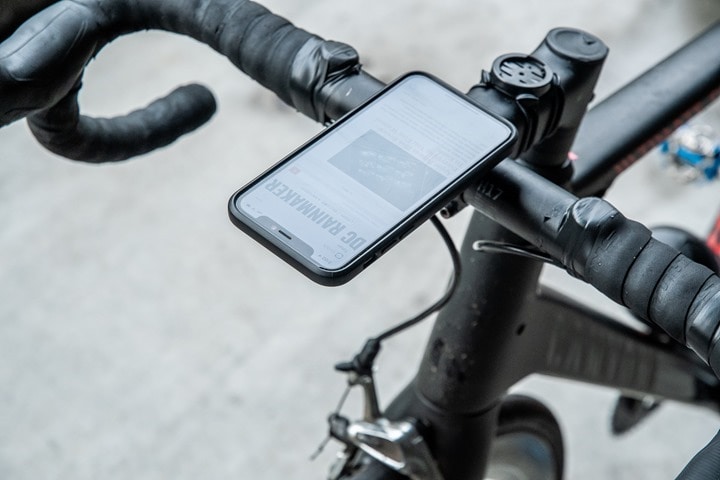 Ultimately, I was focused on three main things here:

A) Did it ever fall off or break?
B) Did the latch become finicky?
C) How did the case look after a month?

The first one is more simplistic. Now, it never fell off or broke. So that’s positive. And the second easy as well – no, the latch feels just the same as before. Great, two down!

The third one was in some ways the one I was most skeptical on. With the texturing on the back (which I’m not sure is actually fabric but just designed to look like it), I was concerned it might look pretty rough after a while. For example, you’re eating greasy French fries or a grilled sandwich – would it leave stains on your case? Would the sweat from being in your cycling jersey make it stink? What about spilling liquids on it?

For better or worse – I’ve done all those things. Literally, I ate French fries and grilled cheese sandwiches for your benefit. I used it essentially daily on my workouts, both indoors and out, where sweat was the name of the game. On indoor trainer/bike rides, I was often constantly sweating on my phone/case (or holding onto it). It’s had more than its fair share of rain against it, and some mud too. And yet, as you can see below – it’s virtually no different: 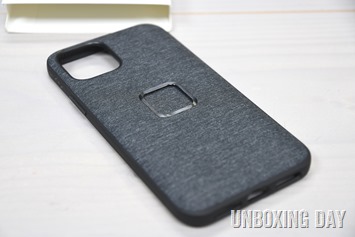 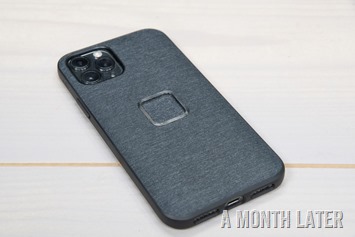 Now about the only downside is that I found I rarely used the mini-tripod, which was frankly the thing I was most excited about.

Well…kinda simple: With COVID-19, I’m not travelling, or in situations that one would normally be even around the city, where I’d use it. For example, if I was on a vacation somewhere – I’d probably use it multiple times a day. But just commuting to drop off the kids, go to the office (which is filled with tripods/stands), and then back to home for dinner – it just isn’t getting much use right now. Our weekends are either spent quietly alone in parks/woods, or on the cargo bike (using the bike mount). The tripod itself just hasn’t gotten a ton of use. I’m bummed there.

Next, some have asked after my preview why not case XYZ or ABC instead? And some of them – like the Quad Lock I largely like. But the Peak Design system is a bit slimmer, and frankly just looks better. There’s a ton of things I don’t pay more to look nicer, but I’m willing to make an exception for the one item that I actually spend more time with than anything else. The same goes for the Topeak Ridecase that works on bikes and has a built-in tripod. That’s awesome, though again, looks a bit beefy for my likes. Ultimately, the reason there’s 95 million phone cases out there is mostly personal preference. Like I said earlier, I’m unlikely to find myself buying their are-you-crapping-me $599 carbon fiber tripod (unless it edits my videos for me), but this is more reasonable in comparison.

Still, my plan is simple – I’ve put down $1 for now on the Kickstarter as a placeholder. I don’t know what case I want (since I might upgrade my or her phone before then), or what accessories I want. But I do know that my wife has already staked her claim that she wants one, to switch from her Quad Lock cases that we normally use. So I suspect we’ll convert the whole family and bike collection over to it for then.