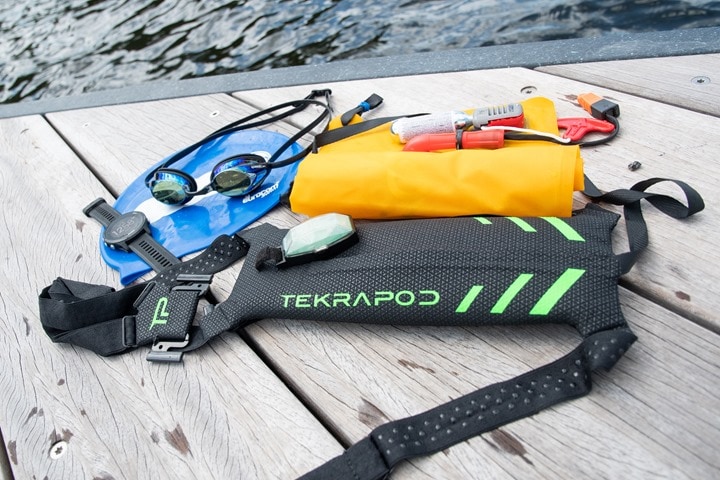 For whatever reason, I find openwater swim safety devices to be interesting. So, if you’re not an openwater swimmer, then returning tomorrow is your best bet. Or, go check out this past post from 9 years ago when I accidentally swam into a policed compound in a foreign country. But, for those who do like getting wet – then read on!

I’ve reviewed or tested a number of openwater swim safety type devices over the years. The goal of these devices roughly falls into two core categories: Be seen (by boats/etc…), or, self-preservation (emergency flotation). Sometimes devices cross the boundary of both, but most tend to be one or the other.

Regular readers know I virtually always swim with a swim buoy. That has two core benefits to me. First, it ensures that boats and others can see me easily on the water – especially useful with any waves/etc. And second, I can stash my stuff inside the floating bag. So that includes sandals, phone, car keys, Snickers bars, margarita mix, etc… Also, I put an extra watch atop for better GPS accuracy. I love it.

The challenge with that solution though is that it’s not exactly race legal. And while being spotted in a race by errant boats isn’t usually a concern in triathlon, self-preservation type safety is. And with longer distance openwater swim competitions, the same is often true too. Thus, Tekrapod. This small CamelBak looking device is designed to by hydrodynamic (like aerodynamic, but for water) while also expanding out into a floatable buoy in times of emergency. It’s got a light atop it, and a whistle too.

Oh, and before we got too much further – note that the Irish company sent me over a prototype unit to try out. After I’m done testing with it, I’ll sort out how to get it back to them like usual. And as always, this isn’t sponsored in any way. If you like this post, just come to the DCR Cave open house next weekend with a box of cookies and we’ll call it even.

How it Works & Swim: 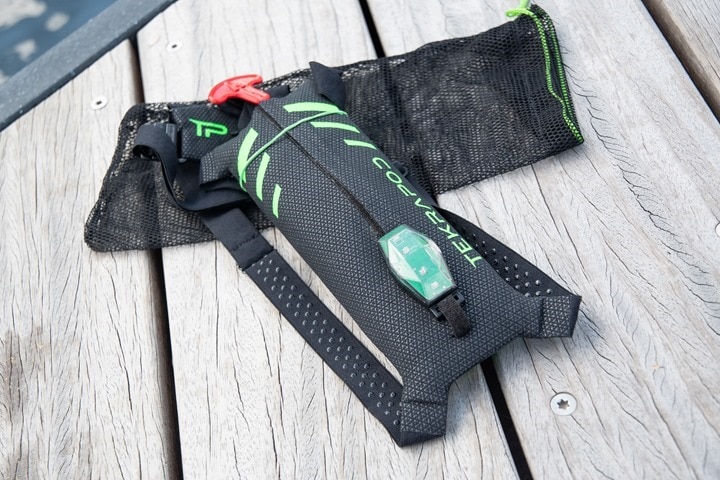 I’m going to try and keep this concise, since at the end of the day it’s basically an Inspector Gadget backpack that makes a floating buoy. The backpack itself is made of the same neoprene material as your wetsuit.  The reason for that is that it ensures neutral buoyancy (making it race-legal). You’ll also notice there’s no seams facing you, to ensure there’s no chaffing if worn sans-wetsuit. Oh, and it comes in a little mesh bag seen above. 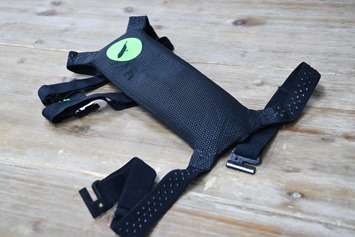 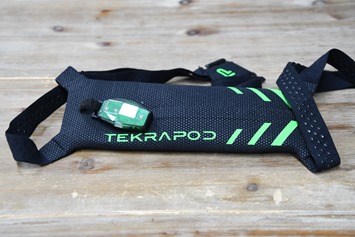 The straps connect kinda like a GoPro chest mount, except without the the cool camera attachment bit (speaking of which: If I lived in a Hawaii-like swim locale with cool shark-like stuff to video below, I’d glue a GoPro mount to the front of the Tekrapod, that’d be awesome). 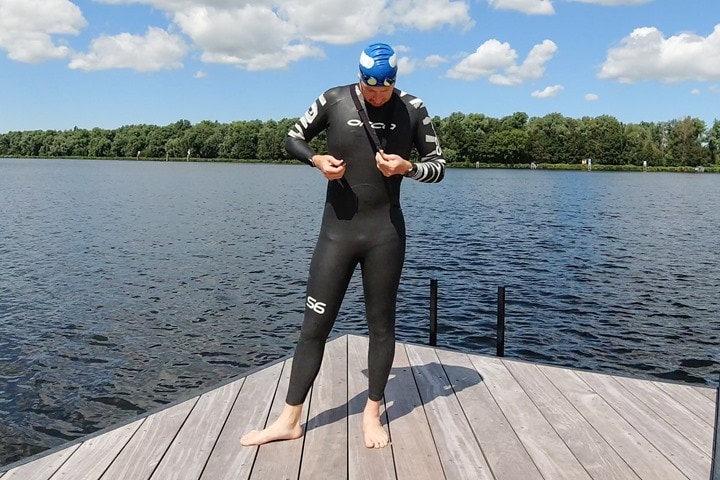 On the upper edge there’s a strobe light. I don’t have exact lumens for it, though I’d also expect this part might change slightly as the prototype unit I had was hand-built. The waterproof strobe light is activated by a small button on the side. 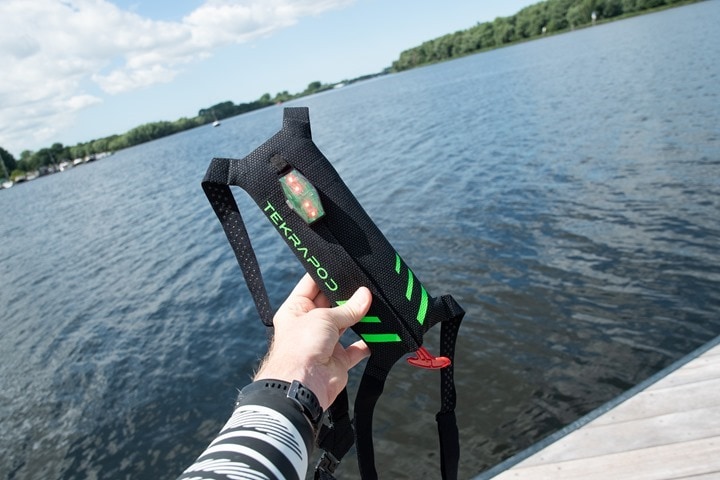 Meanwhile, the good stuff is internal. You’ll notice a Velcro line down the back of the unit. Open it up and you’ll find the yellow buoy folded inside, attached to a standard issue 16g CO2 cartridge. The exact same you use on your bike. 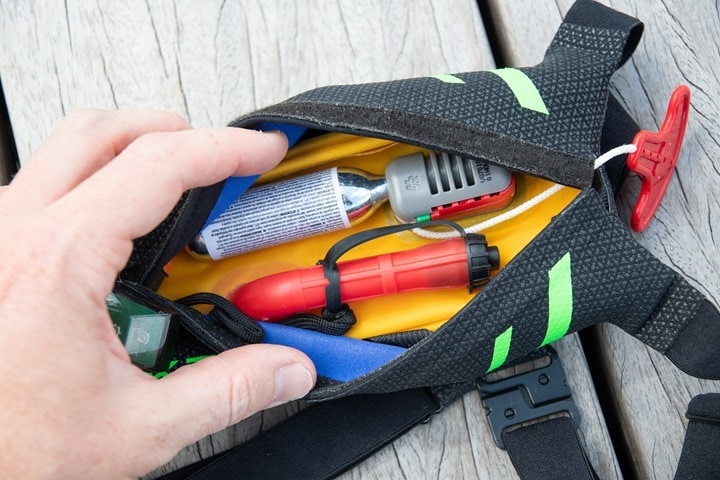 Also in the mix is a whistle that’s attached to the back of the buoy. But more on that in a second.

Once you’ve put on the backpack (which takes no more time than however long it takes you to put on a regular backpack with front snaps), it’s off to the water: 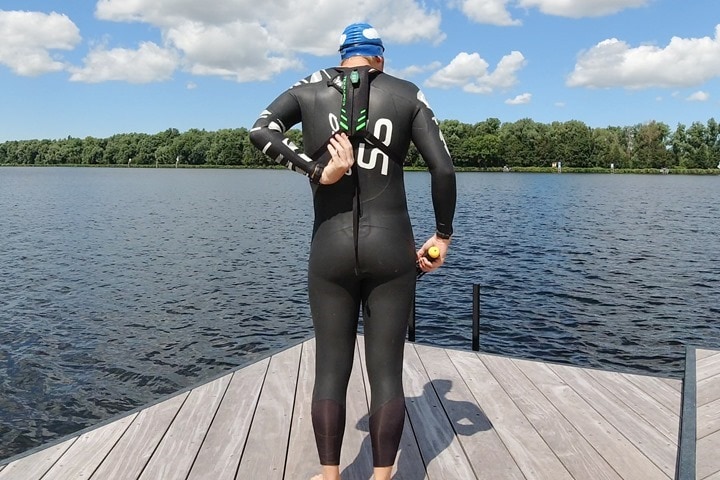 In my case I did a simple loop with it non-deployed. Frankly, you totally forget it’s even there. Oh, and for fun I even attached a Garmin FR935 GPS watch to the upper portion (slightly higher than the light), so I’d have a good GPS track for later. This position doesn’t block the opening where the buoy comes out: 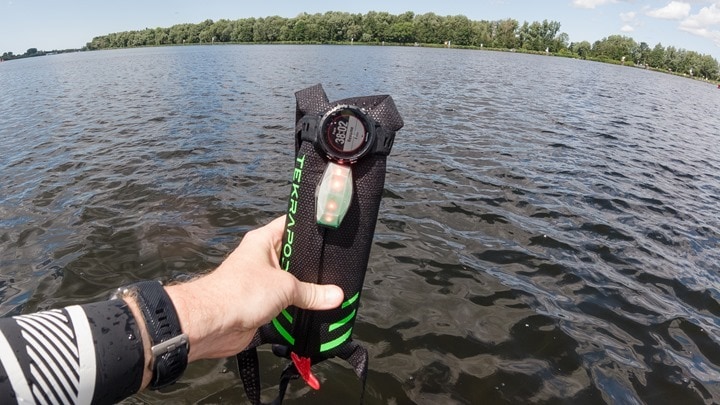 You can barely tell the unit is on me while swimming normally: 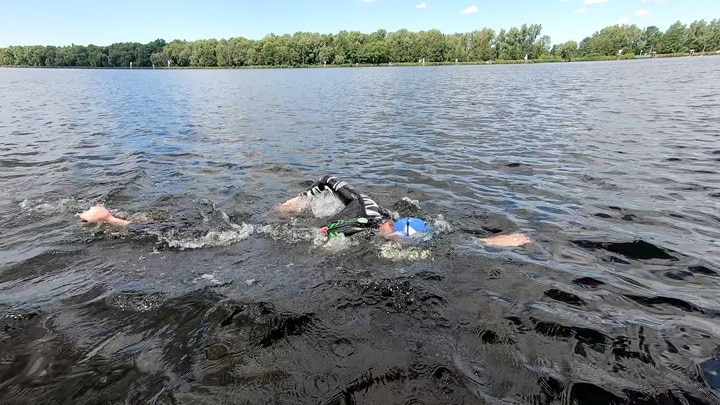 With my swim completed it was time to setup the camera and deploy the buoy. All you do is grab the red handle at the bottom and pull it out, just like those airline safety videos have told you for decades: 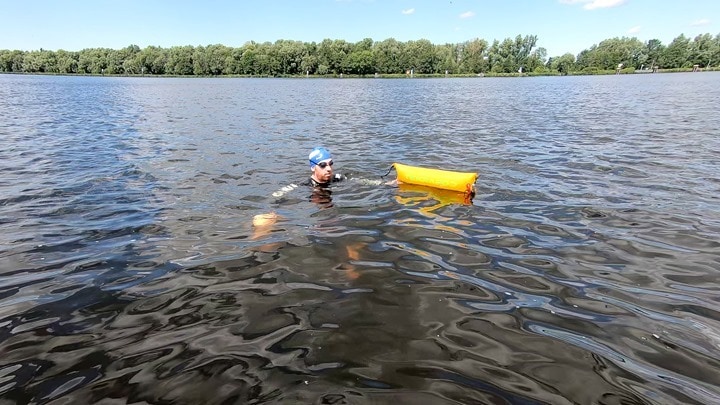 And here’s the 4 second long video of it inflating:

The buoy is also detachable in case you actually need to give it to a friend instead. It’s got a simple clip that pops off in a second: 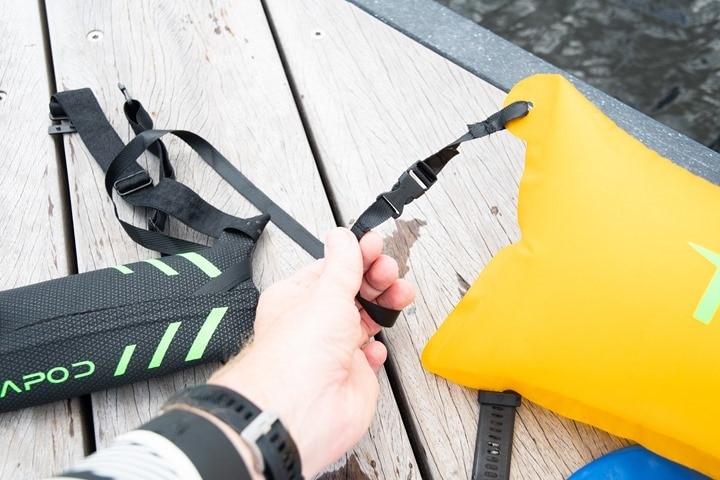 And of course, there’s that whistle I mentioned earlier: 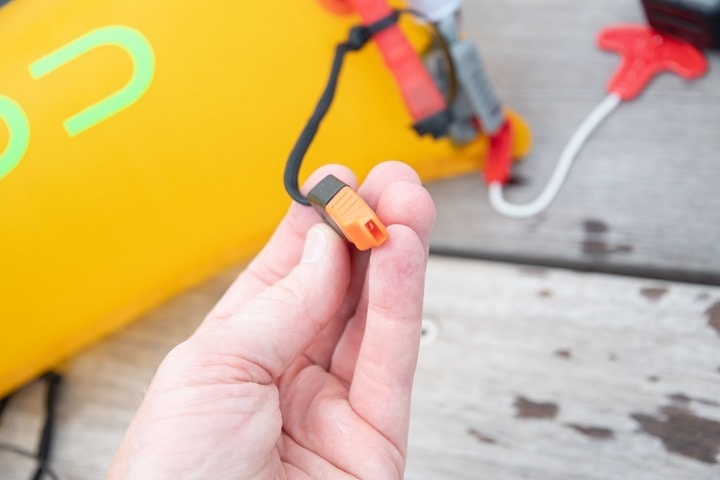 At this point you’ll just wait for whatever’s going to happen to happen. Ideally a boat. Or perhaps you just want to float. 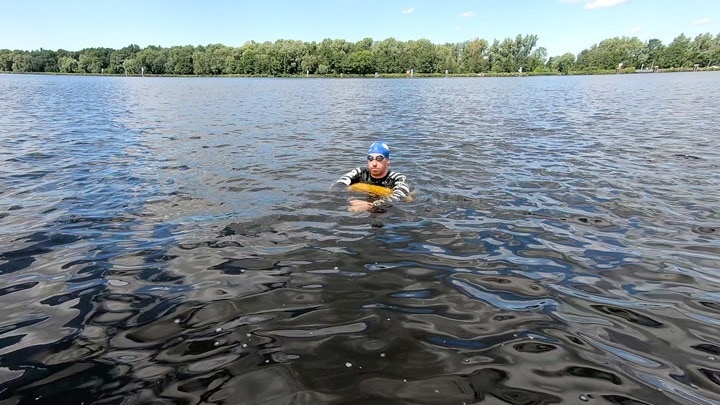 If you want to swim with the buoy behind you you can do so. I tried it for a bit, and it’s not really a big issue. You’ll feel the buoy hit your feet every couple kicks, sorta like when you think you’ve kicked a shark. Same concept: 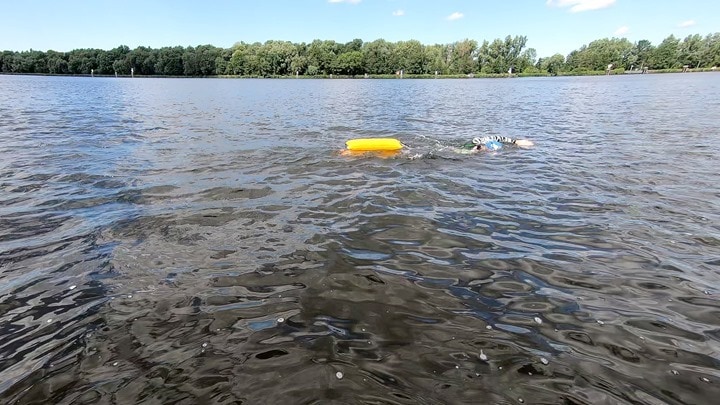 I suspect if you were shorter than I, then the tether is just long enough so that you don’t kick it.

Once back on dry land you’ll open the small manual inflator value (in case your CO2 somehow went awry, it took a mere three breaths to inflate it fully), then flip the cap over and press into the value, which will deflate it: 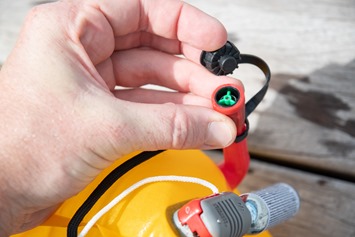 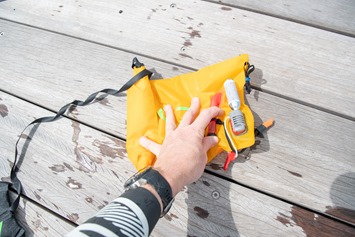 Fold it back up, attach a new CO2 cartridge, and you’re good to go for another swim. It’s frankly pretty straightforward. From a stroke standpoint, no part of my stroke appeared to be impacted by it. It feels completely out of the way, in large part because it is. 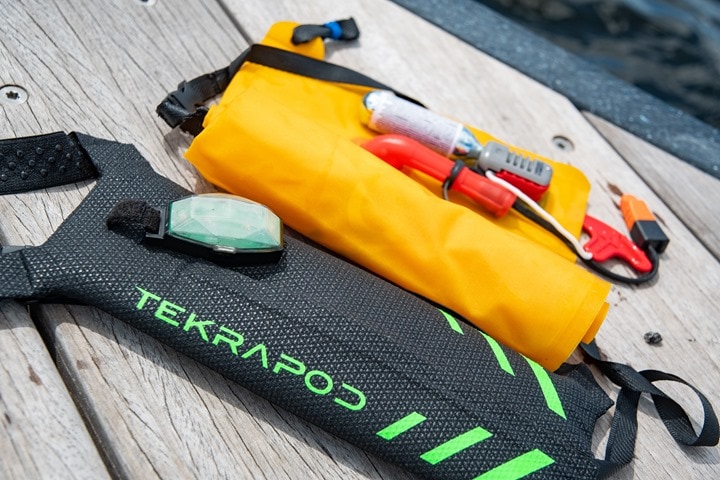 The Tekrapod appears to do exactly that it advertises to do: Be a small and out of the way personal safety device for openwater swimming, with the added party trick of having a strobe light and whistle, as well as being super clean hydrodynamically (according to them anyway). And it’s race legal, with the company already having used the device in sanctioned openwater events.

The challenge for Tekrapod isn’t whether or not their product is solid, instead, it’s more just a case of whether or not their product fits what a given consumer wants. As I noted at the beginning, openwater products like this tend to fall into two camps: Being seen/holding stuff versus personal safety for a swimmer in distress. Which also tends to fall along the lines of training vs race. For a race, this solution seems like a no brainer, and a bit more streamlined than the previous MySwimIt device I tried.

Whereas for training, it’s going to be tougher to get me to switch from the swim buoy, merely because that holds my gear while also being far more visible to most boaters. It’s not as streamlined of course, but I haven’t had any meaningful issues for training, even in fairly choppy water. But again, it just comes down to what you’re looking for product-wise. Two different scenarios, like deciding between a van and a sports car.

The product though is a bit pricey at 94EUR on their Kickstarter campaign, which started last night. Expected delivery is in February, which is prior to next season for most Northern Hemisphere folks.