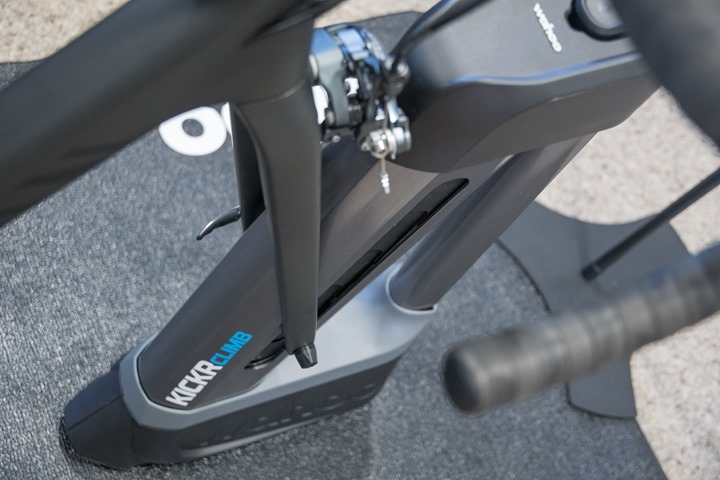 While this Eurobike is a bit quieter when it comes to major new trainers, we do have one item that’s definitely unique coming out of the Wahoo camp: An incline simulator.

The new Wahoo CLIMB will raise and lower the front of your bike to match the incline the trainer is currently simulating, allowing you to actually feel the climbs in Zwift, or just to leave your bike forever in a –10% descent (my personal favorite).  All of which is already compatible with all apps out today on the market.

While the unit is a few months away from shipping, I did get a chance to toy with a prototype a few days ago and form some initial thoughts on it. 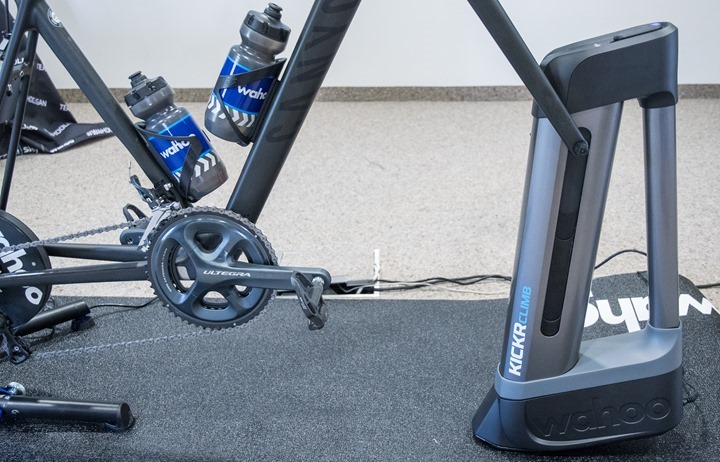 To start things off it’s best to start with how connectivity works, and then work backwards from there.  The KICKR CLIMB actually pairs wirelessly directly to your KICKR 2017 or KICKR SNAP 2017.  It doesn’t talk to the app directly.  In fact, the app doesn’t even know it’s there.

To get things paired up you’ll take the wired remote control from the CLIMB and bring it next to the KICKR/SNAP, which uses proximity pairing.  This remote uses an old-school style telephone coil cable, and has a small handlebar grip/clamp built in: 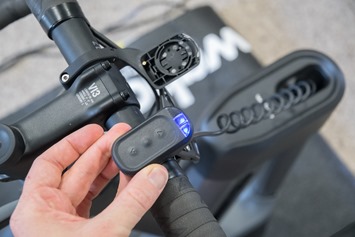 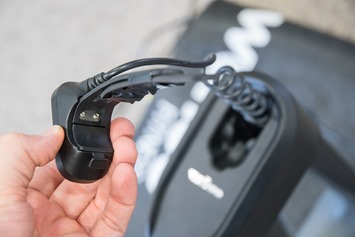 When not in use it recoils back to the KICKR: 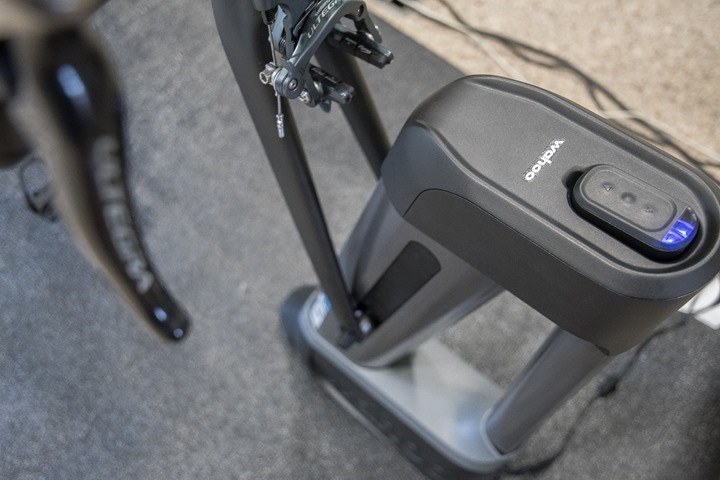 In Automatic Mode (aka Unlock Mode) it lets the CLIMB follow along with whatever gradient the KICKR/SNAP is sending.  So if Zwift sends an 8% grade, then the CLIMB goes to 8% as well.

Whereas in Manual mode (aka Lock Mode) you can override the grade.  That could be because you’re a pansy, or because your dog has decided to lie down below the trainer somehow and you don’t want to squish it when it goes to –10% decline.  Or perhaps you just want to manually control the gradient feel in some other scenario. 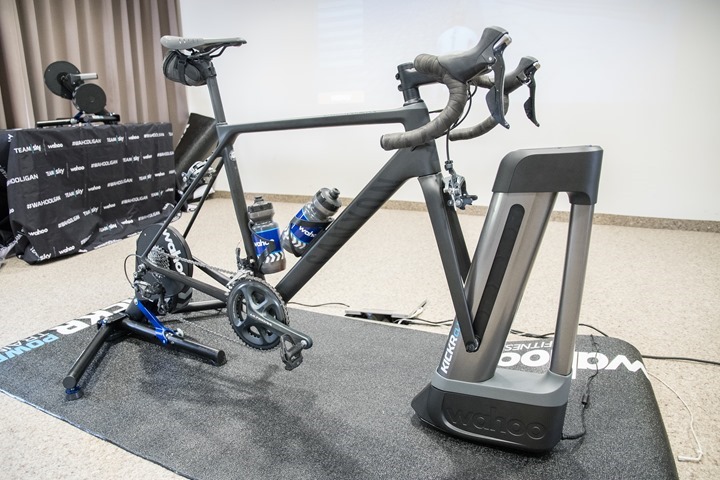 When the CLIMB is moving, it moves pretty darn quick.  You can see this in the video in the next section.  The Wahoo folks noted that it’s probably overbuilt for this purpose in terms of the weight it can handle and how fast it can move.  And I’d agree there, it almost moves too fast – which is something they’re working on in smoothing over the next few months.  But that’s a pretty easy thing to address. 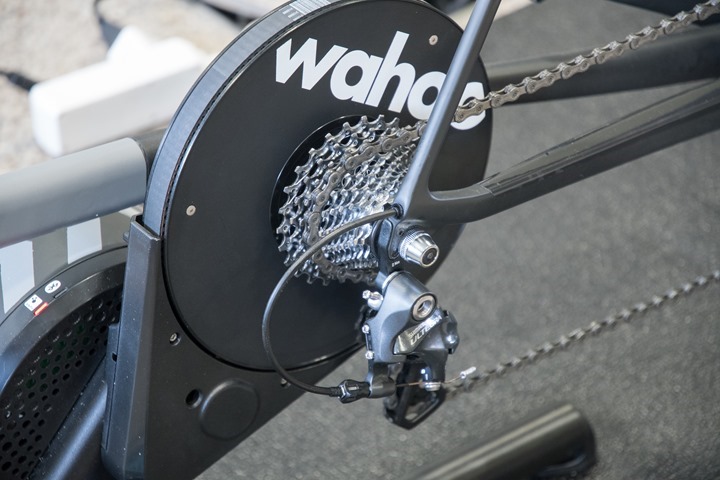 As you may have guessed by now, your bike is totally wheel-less at this point.  Your front wheel is removed and the fork clamped on to the quick release style system on the CLIMB.  This supports standard quick release hubs as well as 12×100, 15×100, and 15×110 thru axle.

And when it comes to going up and down, the max incline is 20%, and the max decline –10%.  I’ve put together this awesome animated GIF to illustrate it.  You’re welcome.

The whole thing is far more stable than it probably looks, in large part because the back of your trainer is locked down – so while there is some side to side give, you’re only going so far.

So what’s the catch?  Well, there two: Price and compatibility.

The reason all comes down to where you put the quick release skewer into the trainer.  On existing KICKR’s, this means that your drop-out (the part that sits over the skewer/wheel) would have come in contact directly with the KICKR structure, clamping it on.  That meant that as the bike went up and down it would be grinding against the KICKR.  And after a season of up and downs on Zwift there’s a very likely chance you’d injure your bike (or worse).  With the new KICKR 2017 there’s a secondary spacer of sorts that fits in to allow your bike to rotate freely: 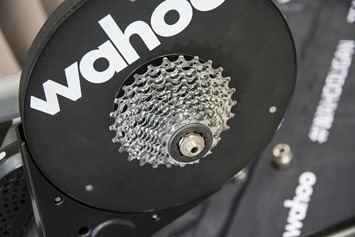 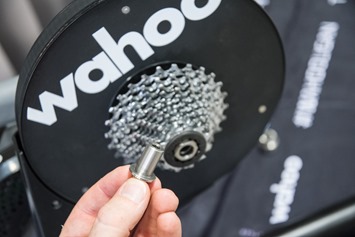 Wahoo says they tried to figure out a way to retrofit existing KICKR’s, but the way those were designed left no room to put in any additional spacers.

The second and albeit slightly lesser reason the new KICKR 2017 is required is that on the left side of the other KICKR units there’s less clearance for disc brakes and such to go downwards.  So on the new KICKR, you’ll see this is leveled down a bit compared to the old KICKR.  In fact, it’s about the only way you can tell the two trainers apart at a distance. 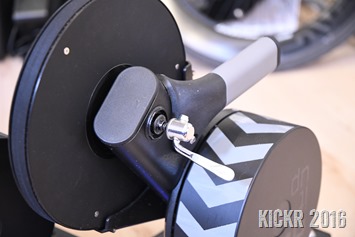 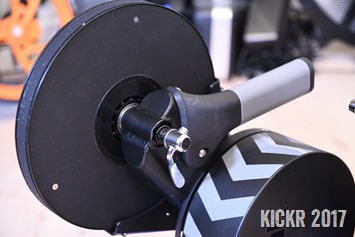 From talking to the company, it doesn’t sound like Wahoo is trying to make a mint on the unit, mostly as a result of likely overbuilding things internally from a robustness standpoint.  Multiple people I talked to at Wahoo indicated they’d love to be able to offer it at a lower price, but at this point the components internally just don’t allow it.

I had a chance to take things for a spin earlier this week.  And overall it’s pretty cool.  Below is a video I shot that walks through how it works and my thoughts on it:

As you can see, the speed which it moves at is pretty interesting.  And again, in talking to Wahoo they think the smoothing piece should be pretty interesting.  As of now Zwift (for example) only sends gradient commands once per second, and they don’t get a ‘heads up’ on those commands coming.  So today they respond instantly to those changes in a manner that feels a bit quick.  Whereas down the road they’ll either smooth those out or perhaps receive commands slightly in advance so the smoothing perfectly matches the action.

So is there a training benefit to incline simulation?  Maybe, maybe not.  There’s one collection of studies here about it, though the thoughts are mixed.  In working through them it sounds like inclines only above a certain percentage have a different physical effect on the body.  And certainly most of us that have ridden know that as well.  Whether or not it makes a major difference in training is a different question.

Also – while you’re at it – check out Shane Miller’s first look video he just posted as well over here. 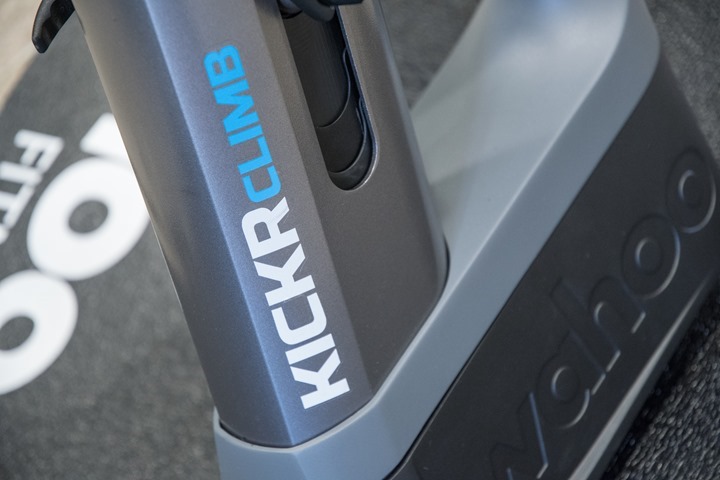 This is definitely cool stuff, and certainly part of the future of where interactive trainers are headed.  Last year we saw Tacx add in road condition support to their NEO trainer (to simulate things like cobblestones), and now with Wahoo simulating incline we add one more piece to the puzzle.  In talking to Zwift, they want to continue to see trainer companies advance in areas like this, as they believe it makes their app and the entire trainer experience more engaging (and obviously helps to bring them more money via subscriptions).

It is, of course, easy to naysay things like this as not integral to training.  And perhaps that’s true.  But Zwift and trainer companies have the numbers to show that more people than ever before are riding indoors on trainers when they might have otherwise been sitting around eating Doritos.  As the cost of these products go down and the apps have exploded in popularity, people are choosing to sit on their bikes and get/stay fit – versus languish for the indoor trainer seasons.

And no matter how you slice it – that’s probably a good thing for consumers and companies alike.

With that – stay tuned for my full in-depth review later on this fall once they’ve got some production units to ride.