This weekend was split on both sides of the Atlantic.  I spent the first portion in Paris, and the second half in NYC.  It was like being a super-model, without the model part.  Just super I guess.

While the weather was mostly nice this week, I was largely riding indoors.  With so much new gear and new trainers to get through, it’s the test of how to get the most bang for your buck from each and every ride.  Whether it be new power meters, bike head units to review, or new trainers – figuring out how to combine all those things together on each ride is the name of the game.

Also, the name of the game is getting all the shots and video I need for each one.  Since I’m sitting on a trainer, I might as well go ahead and get those photos/videos down then.  Except I’ve learned over the years that trying to get photos/videos while sitting on a slightly rocking bike indoors never comes out well (there’s no natural light in the DCR Cave).

So I use tripods, and in this case a slider as well.  It helps elevate the camera over the center of the handlebars, else you’ve gotta play a game of sliding the tripod legs around the bike frame without blocking your pedals/crank arms. 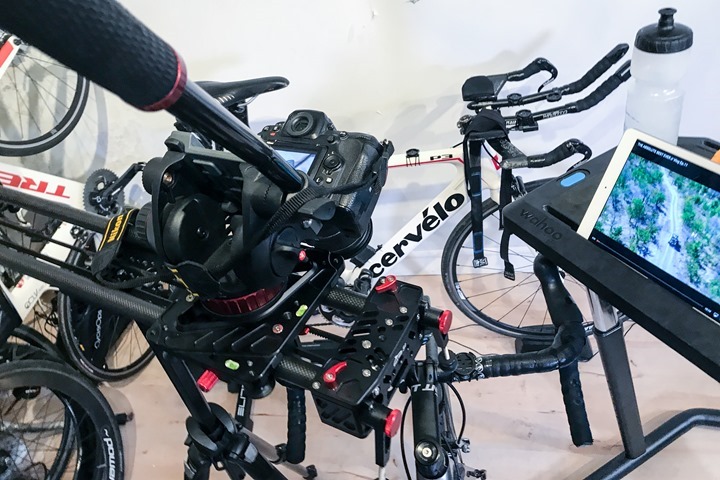 It worked though, and I got the shots and videos I needed.  More on that stuff later-ish.  Which is basically the mantra for almost everything I’ve got in the hopper right now.

2) Evening ride with The Peanut

After wrapping up at the studio I headed home to meet up with The Girl and The Peanut.  From there I gave The Girl a bit of a break from the little one and took The Peanut out for a couple hours for a ride around the Bois de Vincennes. 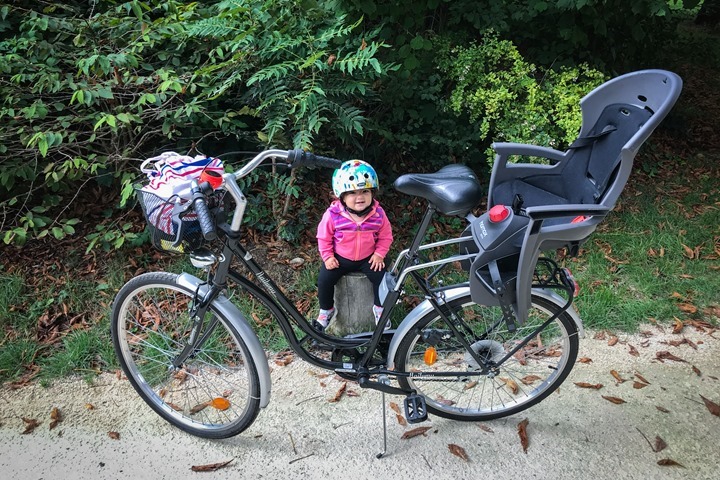 I set up a few points at the corners of the park, and then used the Beeline to just wander semi-aimlessly.  I once again succeeded in finding places of the park I’d definitely never been before, which is always kinda neat. 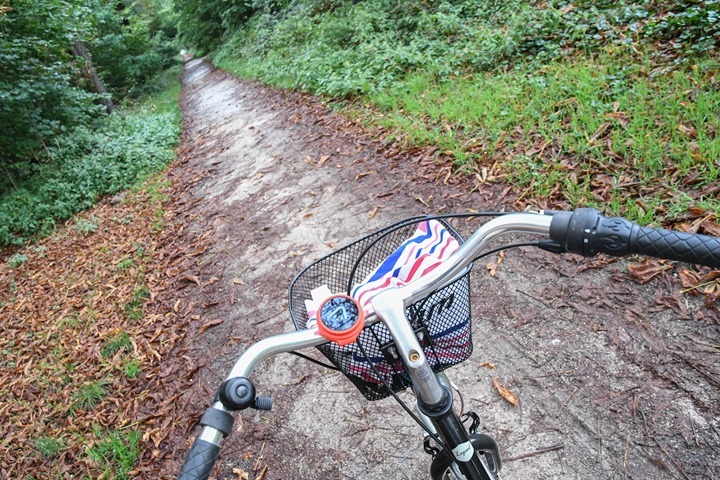 We stopped a few times, either for a snack break or just to crawl across a log.  Because log rolls are best. 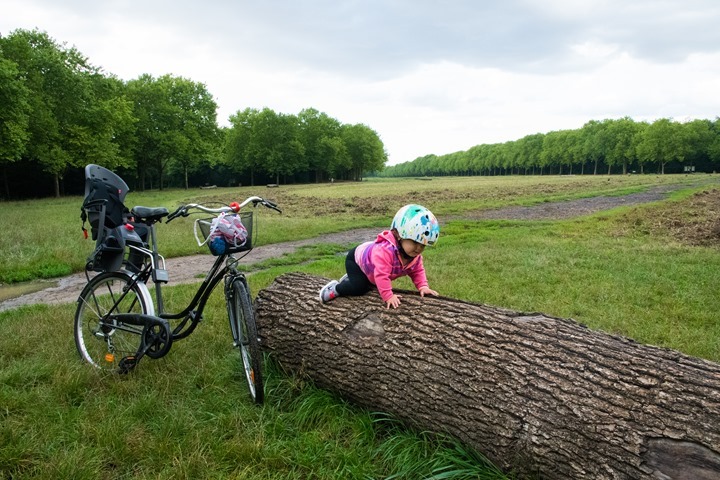 It sprinkled a few times, but nothing she minded.  The storm clouds off in the distance were pretty crazy, but we got home in time just before the rain got crazy.  Phew!

3) Riding along the canal

On Saturday morning I headed out for a few hour ride out of the city.  I experimented this time with one of those automatic round trip routing options to see where it might take me.  At first the results didn’t look promising, with it crossing a less scenic part of Northern Paris.

But just a few miles later it dropped me onto a canal and out we went.  I took it almost all the way to the airport before turning around. 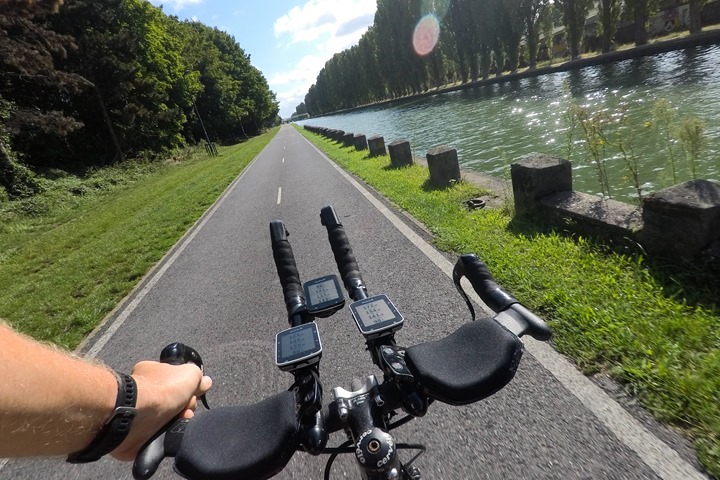 The actual route then continued off into some fields for a while before doing a wide loop back into Paris, but it was clear my ground speed wasn’t fast enough to do the full loop and be back in time for helping to set up for a BBQ we were having.  The stop and go in the city slowed that, as did the same slowing and occasional speed bumps on the canal trail.  Also slowing things down: Getting a flat (which randomly exploded while waiting at a stop-light). 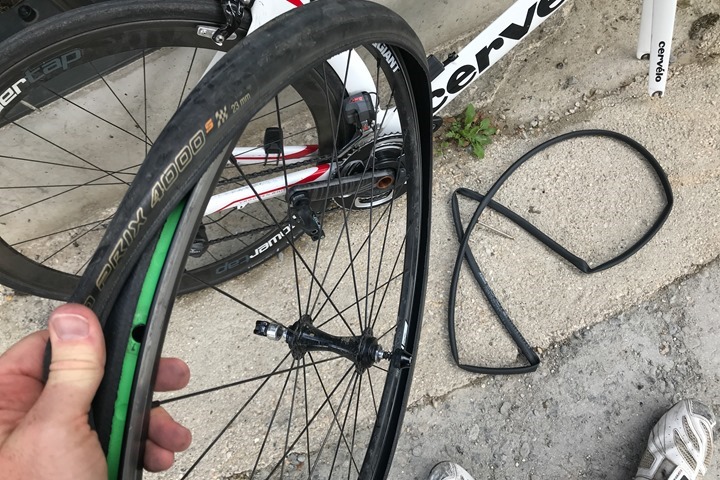 Still, the canal trail was spectacular and I’d definitely take it again (just not peak weekend times in the summer).  I’d simply use different routes to get there to avoid some of the less ideal city streets it selected.  It’s funny though – I’d never once in the five years I’ve been here ran or ridden that route, which is too bad as it’s insanely nice.

Oh, in case you were wondering, the post-ride ribs I made…along with some steak a friend of ours cooked up: 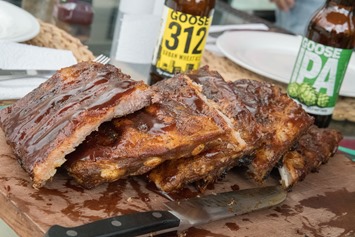 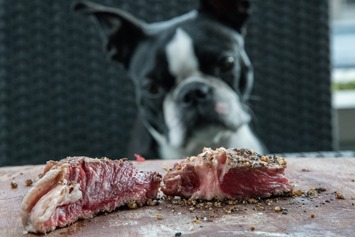 You knew you were wondering.

4) A hop across the Atlantic 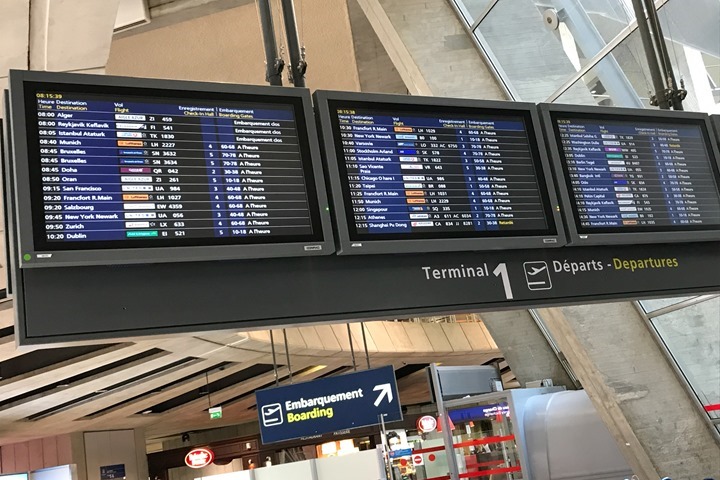 Early Sunday morning I headed out to almost the same place I rode to the day before: Charles de Gaulle airport.

I’d be grabbing a short flight to New York City for an equally short trip.  And yes, I consider a flight across the Atlantic between Paris and NYC ‘short’.  At 7 hours and 41 minutes today, it’s half the duration of a flight to Hong Kong, and 15 hours short of a flight to Australia.  Everything is relative I suppose. 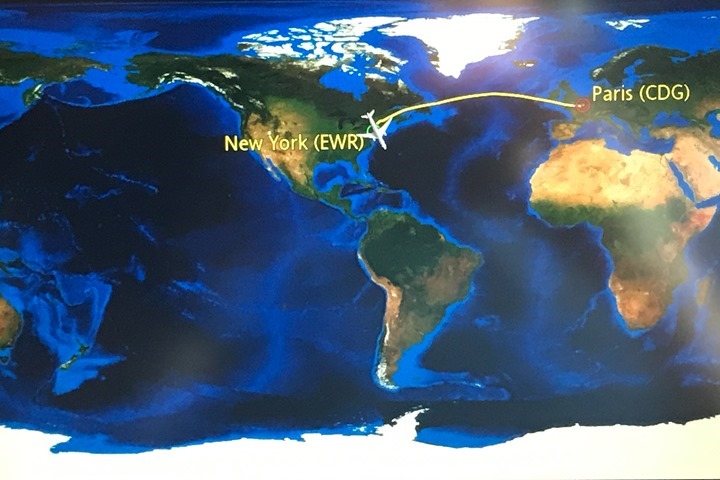 Previous to the morning my spot in seat 20A was looking very solid to have nobody next to me, affording me a place to splay my laptops out across two economy seats.  But then upon checking in on the way to the airport the plane had filled up entirely (well, it was likely already full, just not all the seats assigned).  Sad panda. 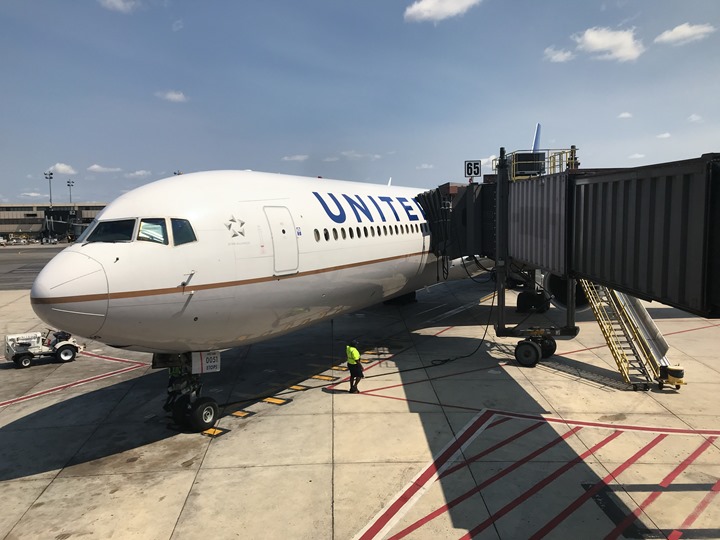 However, when my name got called at the gate it was all happy panda!  Got myself a free upgrade to business class. Woot! Flying just shy of two million miles on United is finally paying off!

Though for almost all of the flight I simply just worked away on upcoming posts and videos.  When I was tired of typing I’d switch to video editing, which I find more mindless than writing or editing photos.

All the while watching the clouds float by (well, until they told me to close my window shade so others could sleep…sigh.)

After landing around lunch time at Newark, I decided there was no better way to shake things out after a jaunt across the Atlantic than a run around Central Park.  I had initially planned to time this to be in the middle of the solar eclipse.  And then I was informed that’s actually tomorrow.  Hmm…

Off I went in full sun. 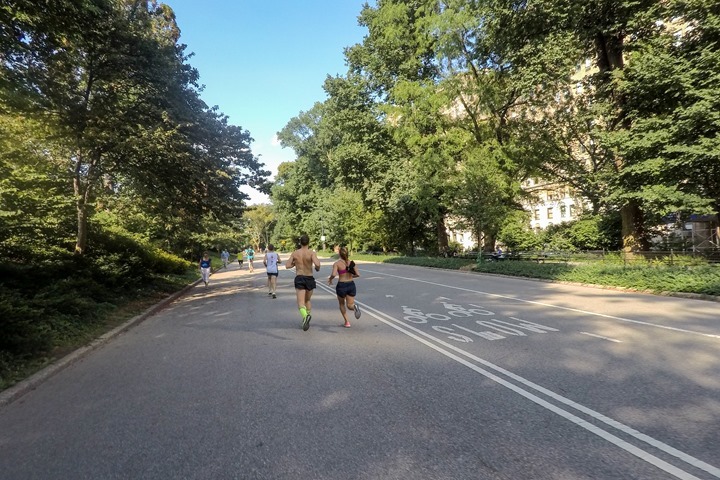 I did a single loop around, which is almost precisely 10KM. Well, I just kept on running till it was 10KM anyway.  You can’t stop at like 9.8KM, that’s just blasphemy.  Even while running in the US with the non-metric system, no runner would end their run at 9.9KM unless things were dire. 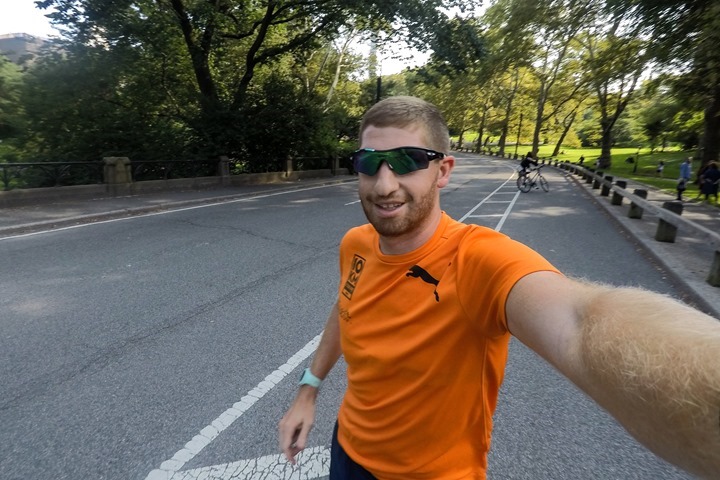 Afterwards, I laid on the grass and enjoyed doing nothing.  No phone, no nothing.  Just sun and grass. 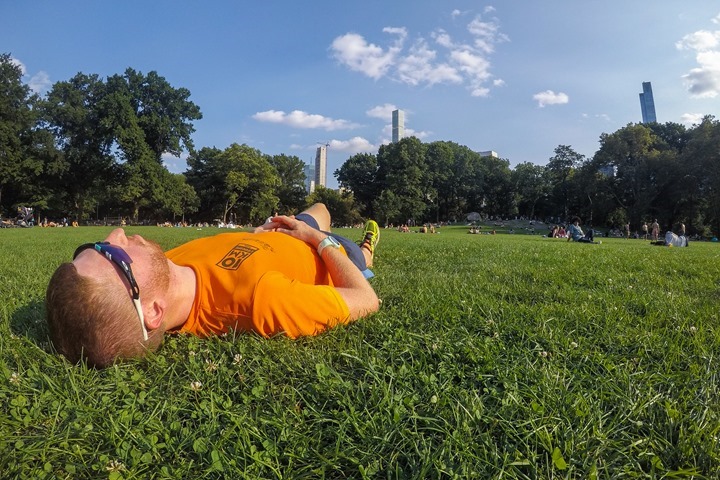 I also watched a bit of a softball game that was nearby.  Nothing hardcore, just for fun. 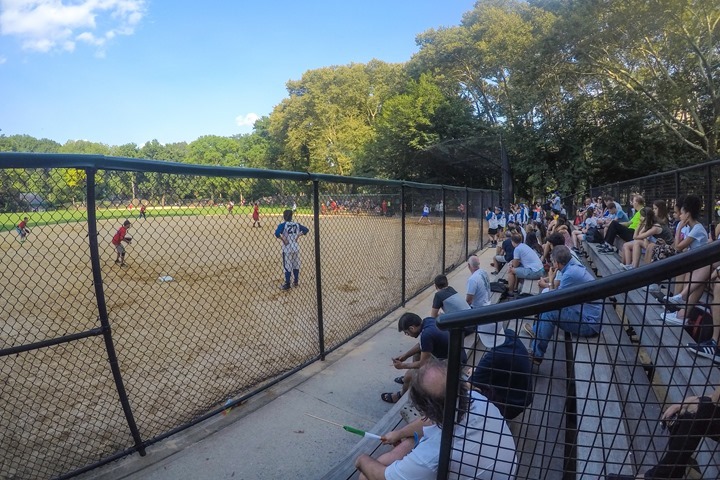 Following which a bunch of errands had to be run (as well as beforehand actually).  So before I knew it my day was done and my weekend along with it.

(In the event you’re looking for my other NYC trip goodness, I’ve got plenty of past posts here. From being on TV, to glorious meat sandwiches, triathlons and much more!  Oh, and my underwear run.)