5 Random Things I Did This Weekend in Sardinia

Turns out the last few months have been a wee bit heavy on travel.  Thankfully, they’ve all been to great places – and for better or worse, we’ll be taking a bit of a staycation for the majority of the rest of the summer.

This week we’re in Sardinia (smallish Italian island), with The Girl’s parents, who are continuing their trip through Europe (started last week in the Netherlands).  We haven’t been before, though have been to sister island Corsica (of France) back a few years ago and really enjoyed it.

Here’s what I’ve been up to the last few days!

While last week was quiet, this week and next week promise not to be.  With Le Tour starting up next weekend, various products are timed to announcement there, and I’m working on reviews for many of them. Concurrently, I’ve also been working to knock out both reviews for previously announced products (like the Polar M430), as well as updates to existing posts (like the Suunto Spartan watch series, or trying to untangle the total cluster$$@# that Withings did to their products).  It’s a bit of a delicate balance between them all.  Sometimes the balancing act breaks. 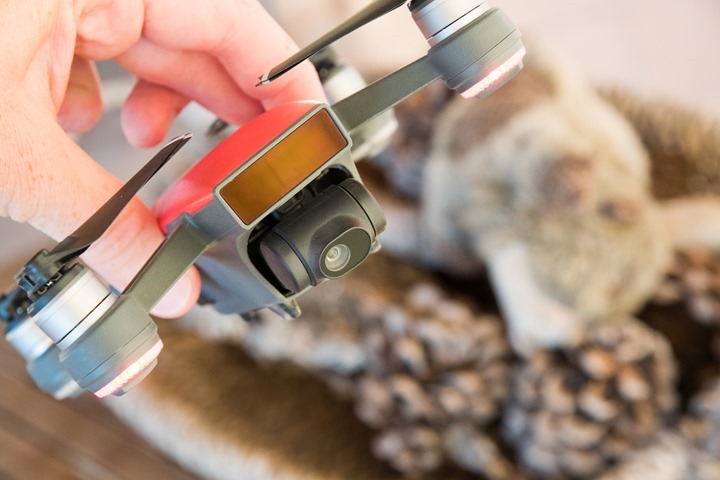 Still, a few hours ago you saw the DJI Spark review post.  That included a bit of sports activity with things like Active Track and the bike. 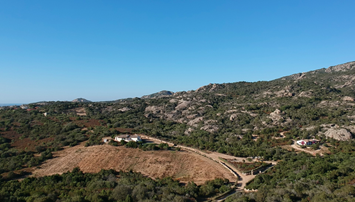 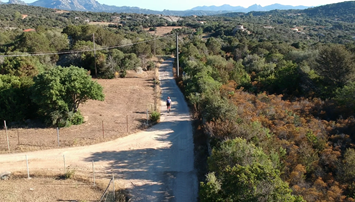 And then again as noted, working on various other reviews concurrently to that.  It’s rare that I’m only testing a single device at once on any given workout, so…more on that shortly. 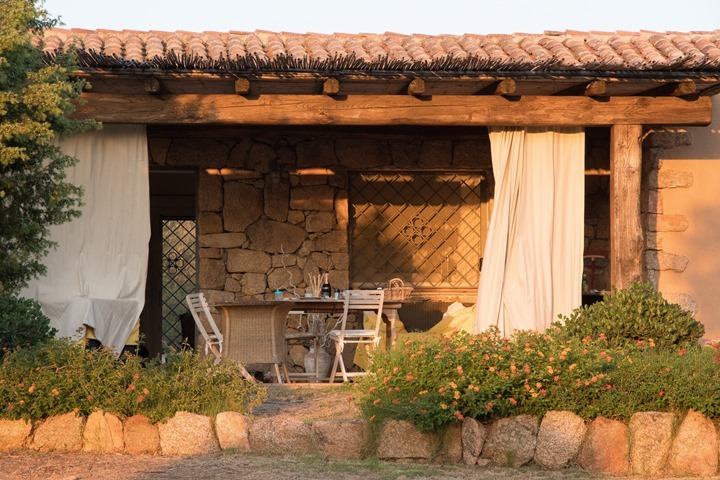 Of course, being in Italy wouldn’t be a complete trip without all the amazing food.  And while there are no doubt many great restaurants on Sardinia, we’ve been just enjoying cooking outdoors on the grill at our AirBNB spot.  It’s a small cottage of sorts up in the hillsides, that overlooks more hills and eventually the sea. 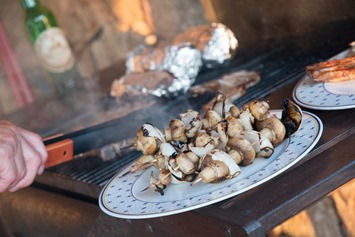 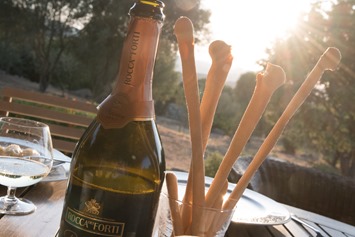 Just like in France, the prices for local items like fresh pastas are incredible. And with just a little bit of creativity you can really kick it up a notch.  I made a simple sage brown butter sauce for these lemon-ricotta ravioli, and then also added crisped sage leaves on top.  Amaze-balls. 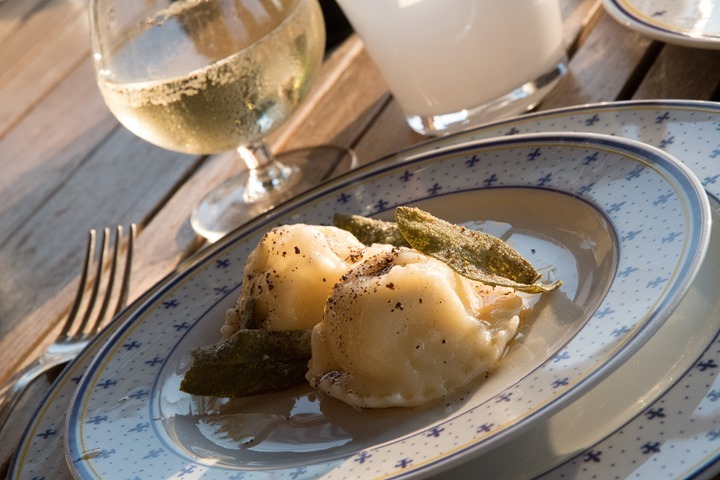 Or just mixing together fresh pasta with fresh pesto, some sliced tomatoes and a bit of pan seared pancetta.  A perfect lunch. 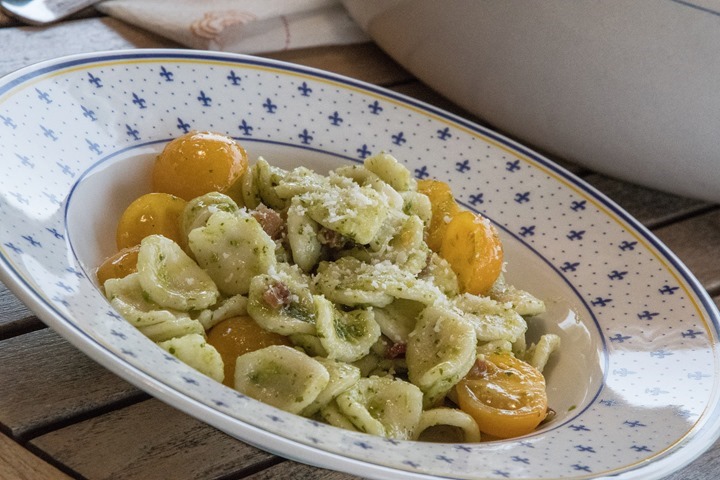 And while the spot has dozens of olive trees on the property, it’s a wee bit too soon in the season to enjoy those. 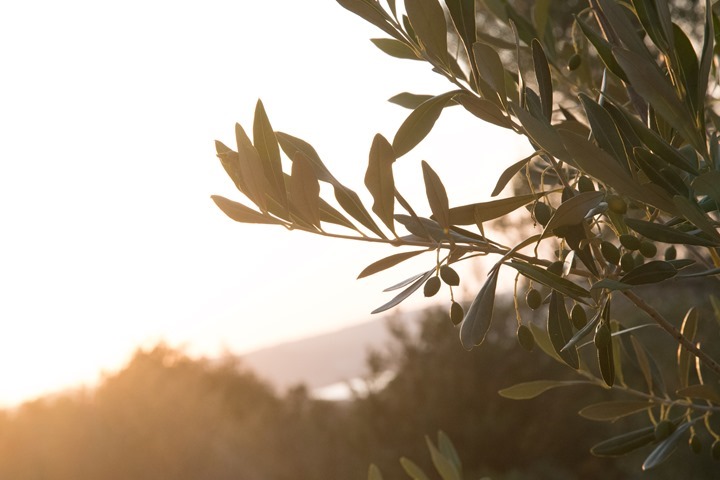 Maybe we’ll have to come back in the right time of year for that!

(In case you were wondering, all the food shots above were with my Nikon D500 DX, almost everything else in this post is with either my iPhone or the GoPro Hero5 Black.  Here’s all the gear I use.)

3) Cycling to all the beaches

I headed out Saturday morning for a bit of a loop.  The AirBNB hosts had on a map a roughly 16 mile route that went past most of the beaches in our area, so I figured I’d do some beach scouting!  My goal was to hit up all the beaches on the route.  Simple, no?

And thus I began.  My first beach was quite lovely: 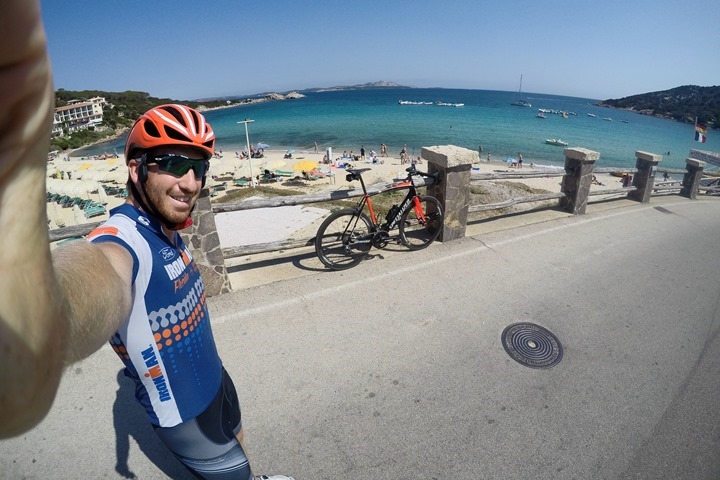 The route itself was also pretty nice, with some cool rock formations along the way. 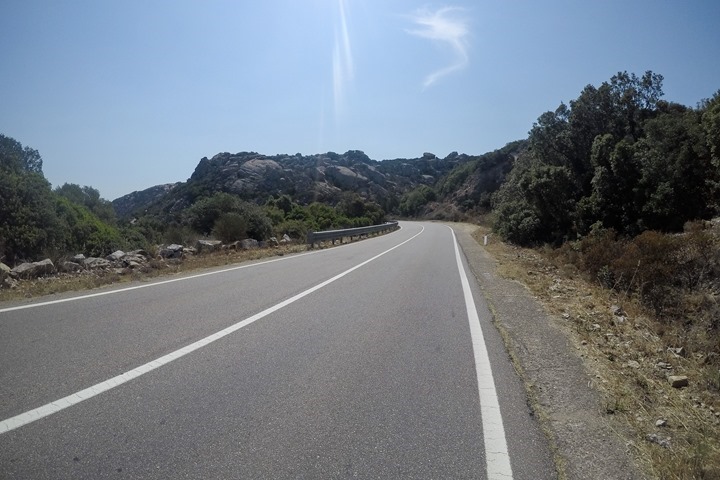 The next stop was Porto Cervo, which technically does have a tiny beach – but mostly it actually had gigantic yachts in it. 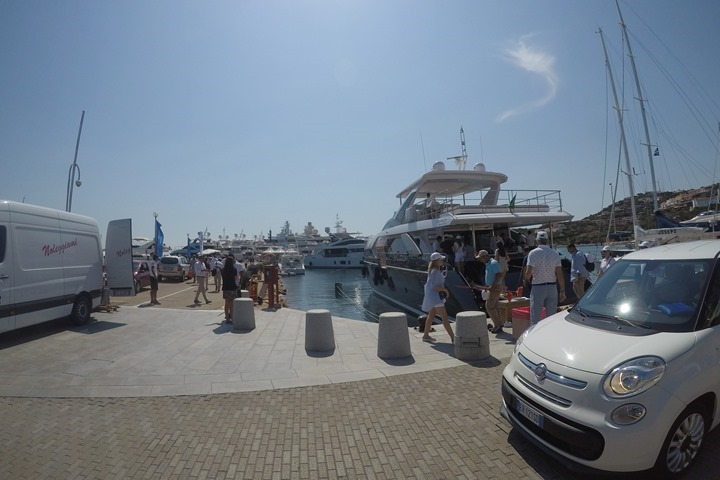 Then I stopped at some unknown beach that required a small trail to get to.  It wasn’t all that nice.

Following that I headed to beach #3, which was quite nice. 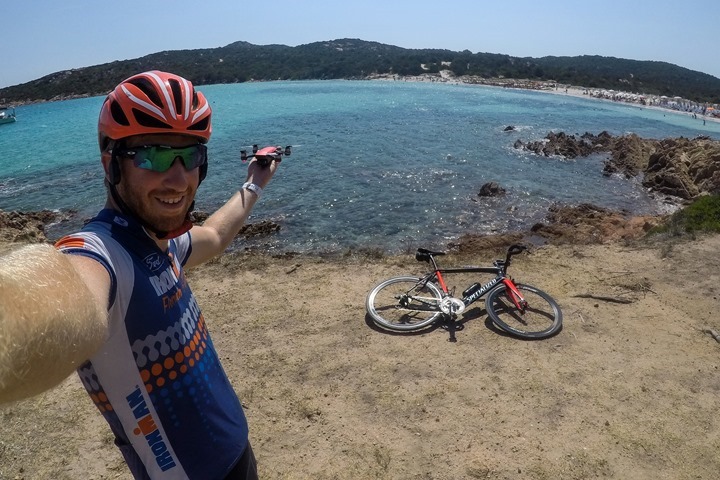 And I’d briefly take out the Spark and get a few shots from there: 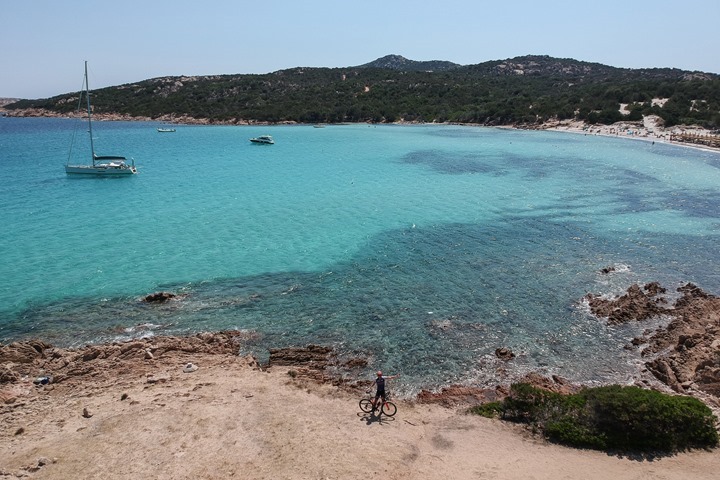 After that, I made the semi-critical mistake of trying to navigate across a section of land without using my GPS.  Despite having 5 GPS devices with me, I ignored them all and went with dead reckoning.  I ended up on this: 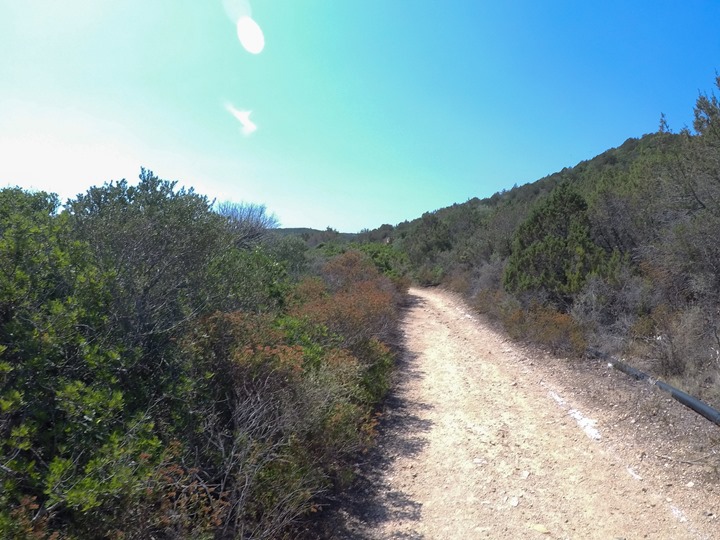 For a long-ass ways.  It was not at all ideal for my road bike when I got to the part where the dirt disappeared and it become rocks or just pure sand.  There was far too much beach here on this trail, with zero water.

Eventually I found the end of that to find myself in a gated golf course community below what was Mt. Everest to get out of it.  Sigh, sometimes you just can’t win.  After all that running around (quite literally in some places on the trail), I was done for, and worked my way back to the main road and eventually back to my starting point.  Success overall though, albeit with a bit more scenery seen than I intended.

While our AirBNB has a pool, so does the municipal sports building behind our apartment (albeit, our little spot’s pool is a hell of a lot nicer)…but there’s always something about the beach that just makes it so much better in summer! 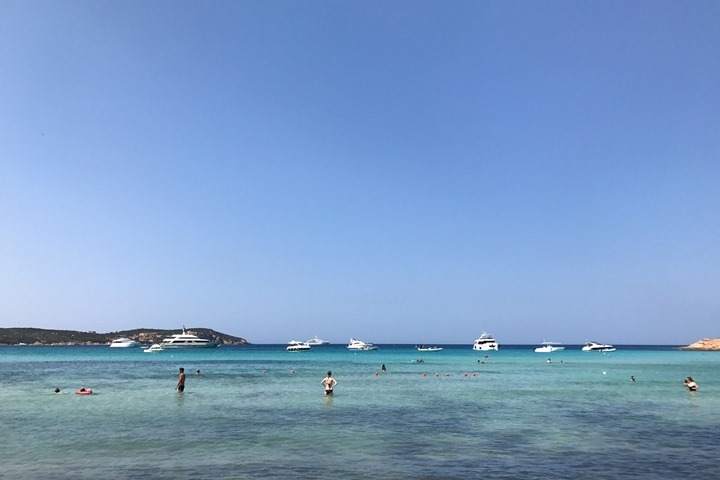 So off we went.  The weather was great on Saturday, though less so on Sunday in terms of sun (less) and wind (lots).  On Saturday I had fun splashing around in the water with The Peanut.  She really enjoys the beach (and the pool). 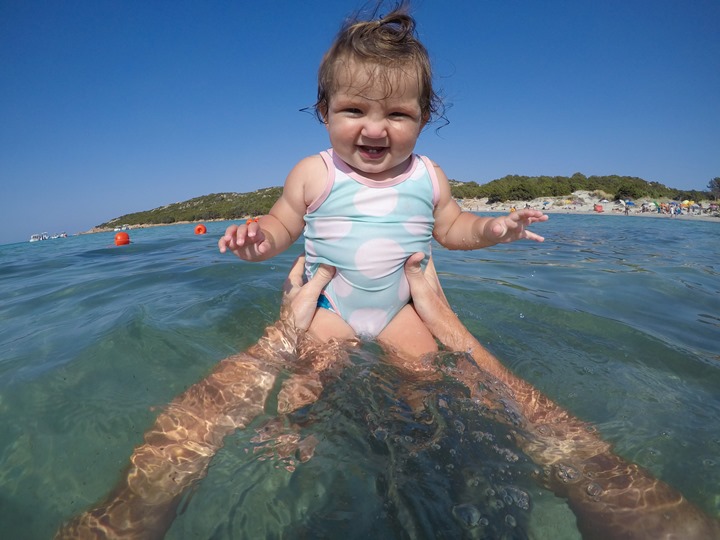 Whereas on Sunday I spent some time underwater with my father in law playing around with the VIRB 360 and how well it handles there.  The water was a bit churned up due to the wind and currents this day, but still, so the stich lines are definitely more visible here than in some scenarios.  The video looks much cooler.

The video looks great too.  If we head back tomorrow and the weather is nice I’ll post that instead, else I’ll post the short clip to YouTube from this past weekend.  Just stay subscribed over there and you won’t miss it.

We went out for lunch one day in Porto Cervo, merely because it was the next exit on the road we had, and it seemed they had some decent places to eat there.  The restaurant walls were lined with famous people that have visited the town (though probably not this restaurant, it’d likely be considered too cheap for them).

These included Steven Spielberg, Rihanna, Paris Hilton, and on and on. 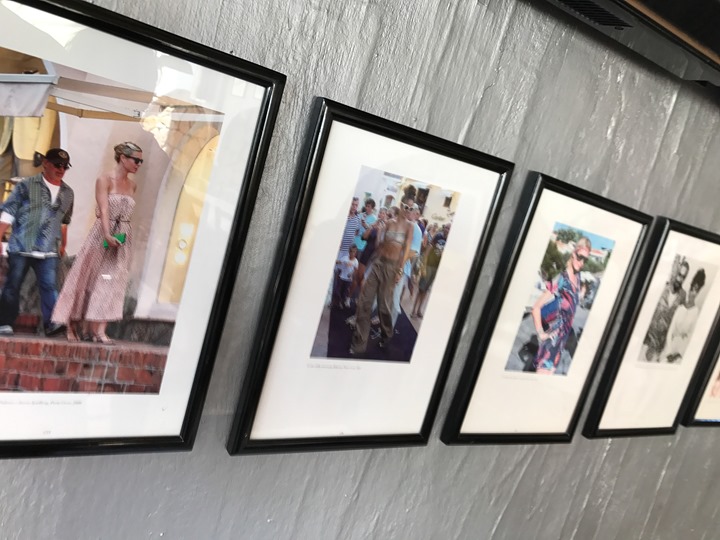 Afterwards, we walked down the pier a bit, as there was some sort of yachting event going on.  It looked like a Yachting Demo Days type thing for really really really rich people.  Though they were friendly, despite us not having the magical leather bands on our wrists.  There were all sorts of yachts available, assuming you had at least $13 million on hand.  Some were upwards of hundreds of millions. 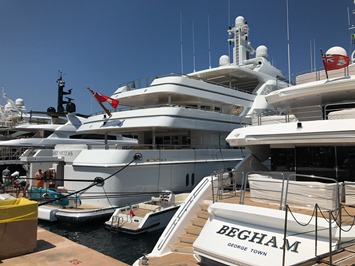 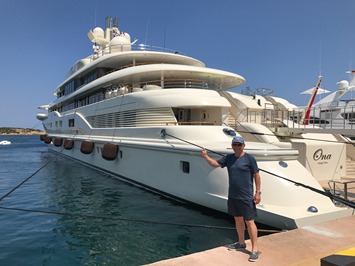 Don’t worry, we only bought two.  Gotta have failover in case one breaks down, right?