5 Random Things I Did This Weekend…in Amsterdam

1) Started the weekend on an early train to Amsterdam

In a clear violation of my rules for being up in the 5AM hour multiple times a week, I once again found myself at Gare du Nord early on Friday morning.  This time catching our 6:20AM train from Paris to Amsterdam.  The high-speed train takes about 3 hours and stops briefly in Brussels about an hour after leaving Paris. 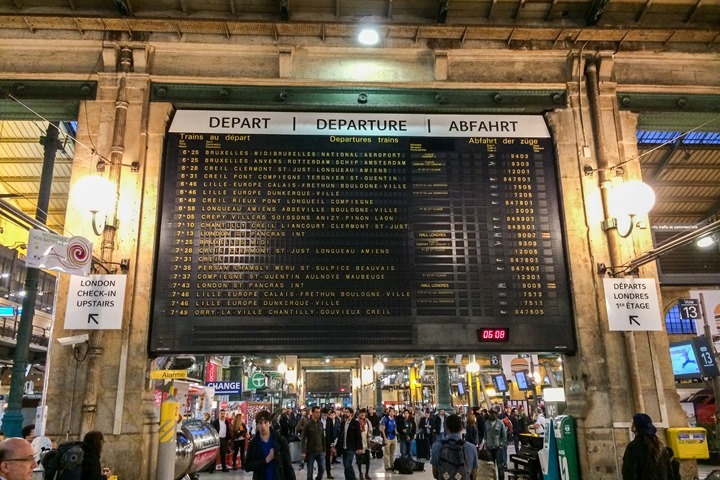 Once we arrived I had a few conference calls to attend to before we could get on with our day.  But after that, we got onto the business of being Amsterdam tourists. 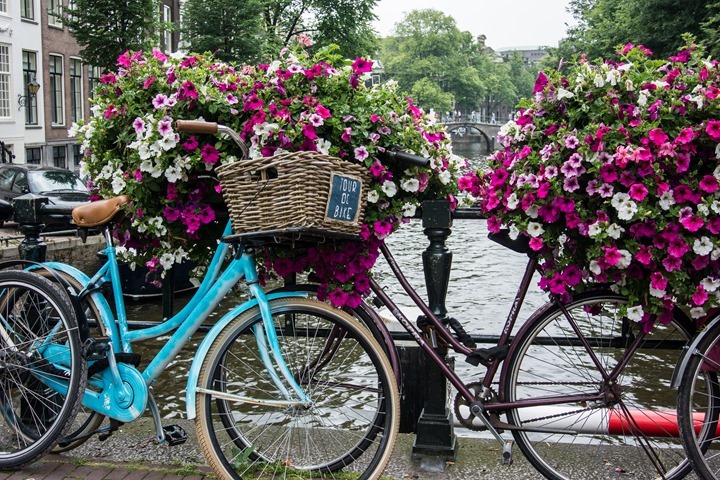 Ultimately, this is exactly one of the reasons why we selected Paris when deciding which city to relocate to as part of my job (we basically could select anywhere in Europe/Middle East/Africa).  The ability to jump on a high speed train and enjoy the weekend in so many entirely different places is something I wouldn’t have been able to get in many of the other locales we were considering.

2) Going for a bike tour around the city, and then rented bikes

After a few hours of aimless wandering looking at shops we headed over to do a bike tour of Amsterdam.  Bike tours are very popular in Europe, usually lasting 2-4 hours.  We’ve done one in Paris with Fat Tire Bikes, and here in Amsterdam we did this one with Mike’s Bike Tours, which actually originally founded Fat Tire Bikes in Paris before they amicably separated (they refer to each other).  In any case…

We selected the mini-tour simply because we figured we’d rent bikes ourselves over the weekend and just wanted a bit of a primer to the city.  While I’ve been here numerous times for work trips, I haven’t done much in terms of playing tourist, so this would be perfect. 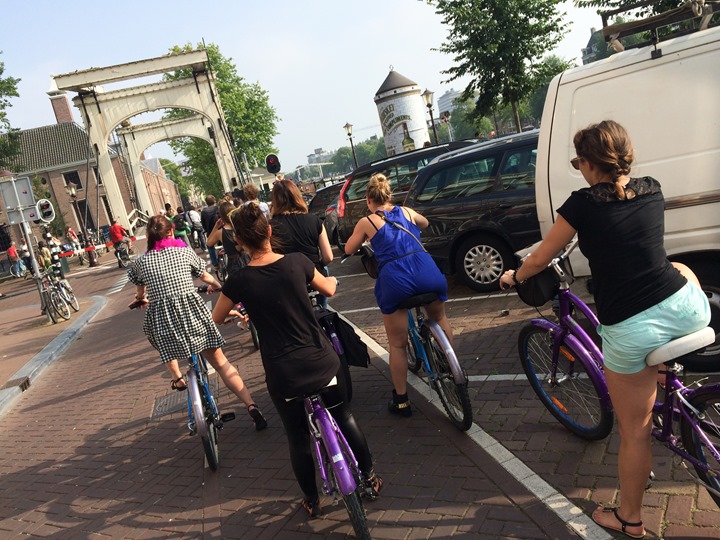 The tour was relatively short (we selected the short one on purpose), but we got to cover a fair bit of ground in the city. 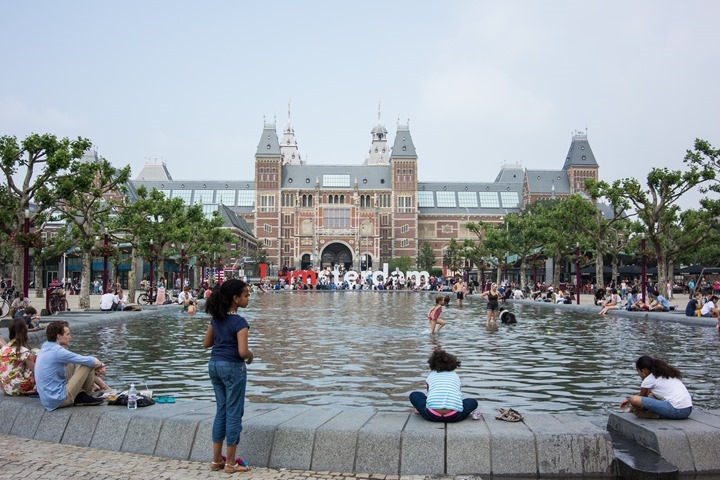 And we were lucky in that our group was fairly easy going as well. 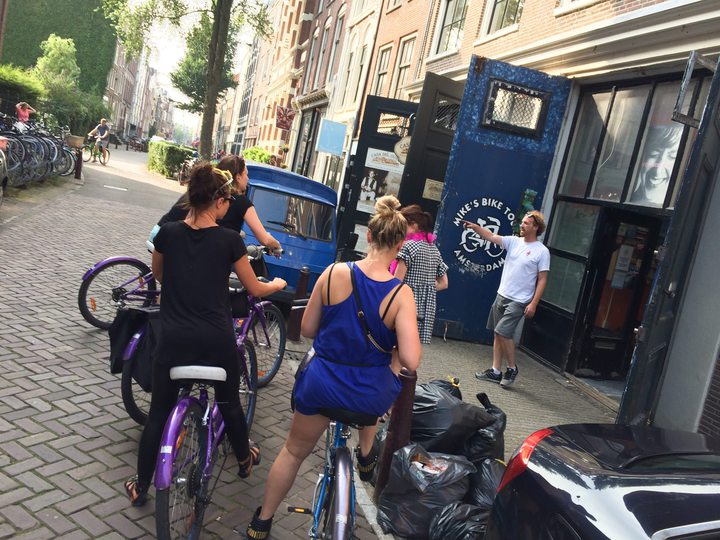 On Sunday we went ahead and rented bikes.  There are approximately 1 million places to rent bikes from in Amsterdam, spaced approximately every 30 meters apart.  It’s cheap and easy. 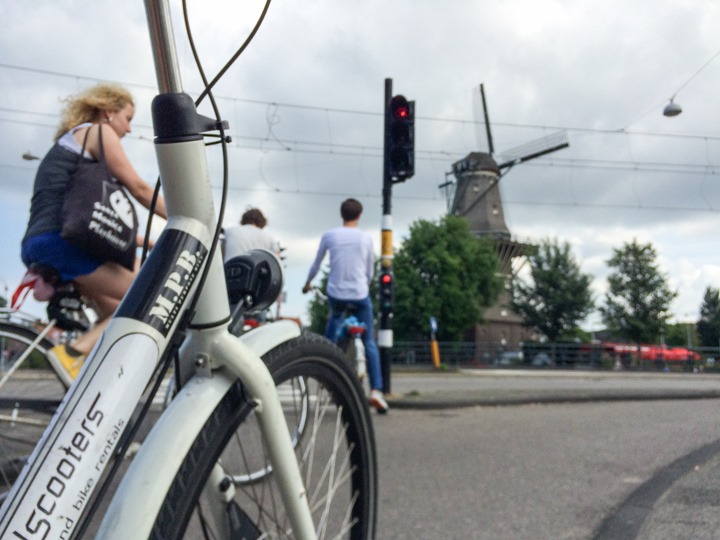 While we had walked a crap-ton on Friday and Saturday, we used the bikes to speed some of our shopping on Sunday.  But, we also went out and checked out one of the windmills in the city. 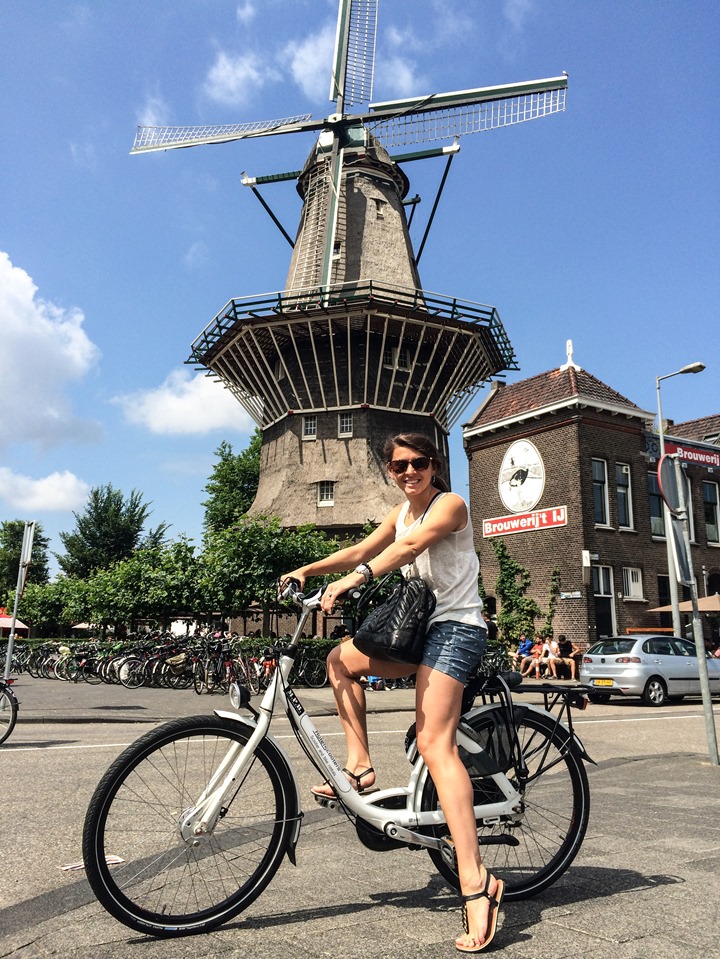 Of course, from a cyclist’s perspective I still feel like there’s almost nothing as impressive in Amsterdam as the sheer volume of bikes.  I don’t know of any city that rivals it, anywhere on the planet.  And the proof is most easily seen in the train station bike parking garage.  Yes, that’s all bikes.  And yes, that’s only a fraction of the bikes parked around the train station. 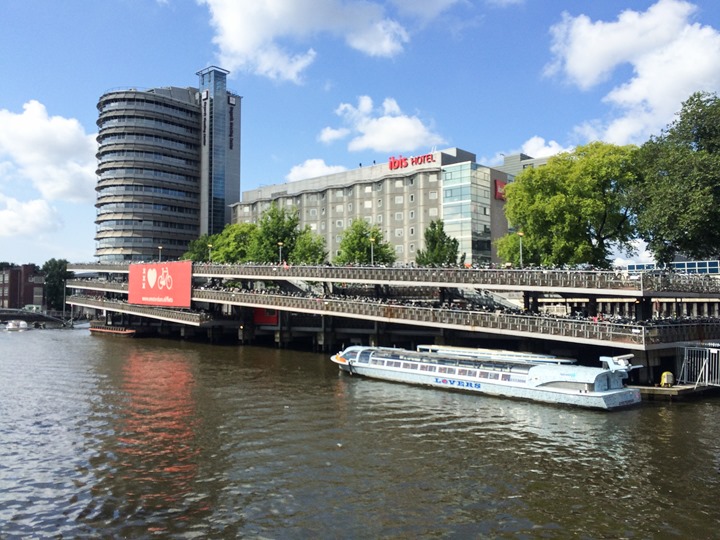 3) We enjoyed lots of food in the city 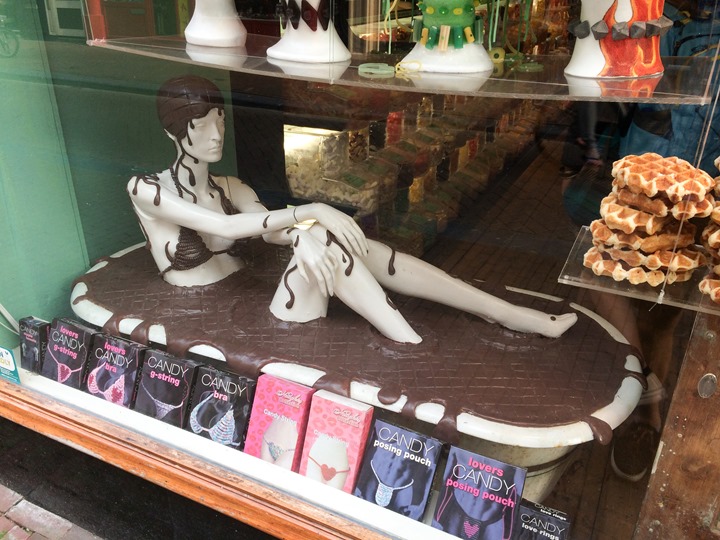 We loved how easily walk-able the city is in the summer, and as part of that how many smaller cafes and restaurants there are with tables out on the street and serving awesome food.  For breakfast we went to Bakers and Roasters, and had this pulled pork creation that was incredible. 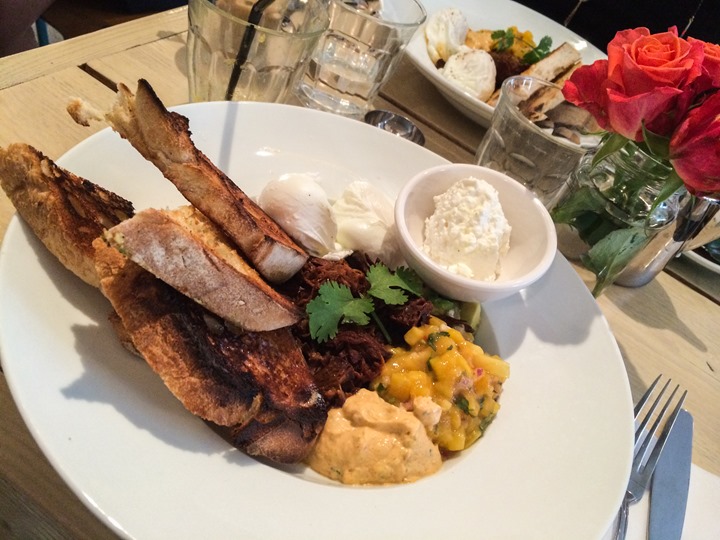 Then there were a waffle or two consumed.  This one was with Nutella on top, and then a caramel-waffle ice cream scoop…because there is never enough waffle in one’s life: 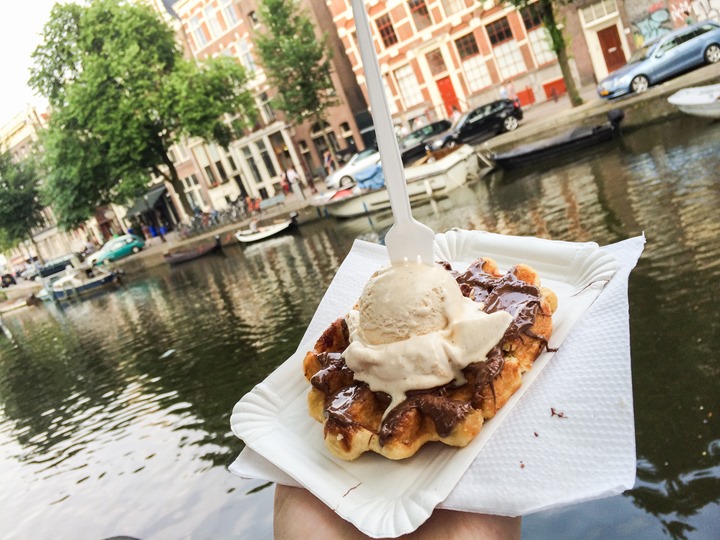 Amsterdam is full of cheese shops.  Sorta like pubs in Dublin.  But unlike Dublin these shops all offer free samples.  Which means much cheese was consumed (and bought). 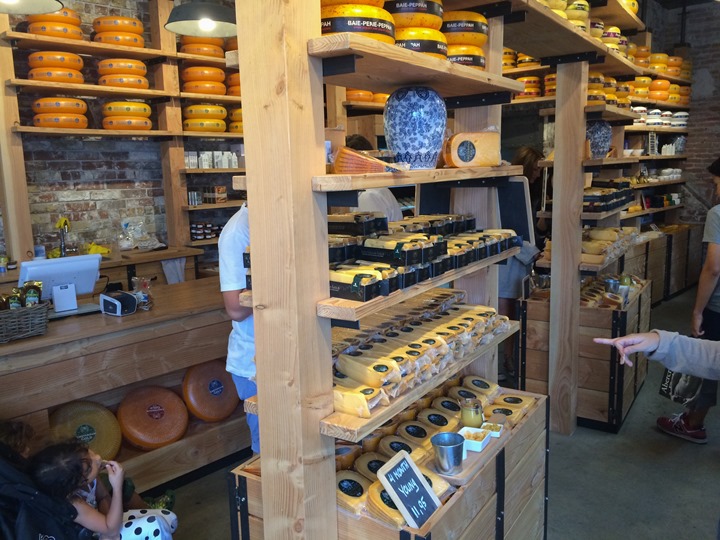 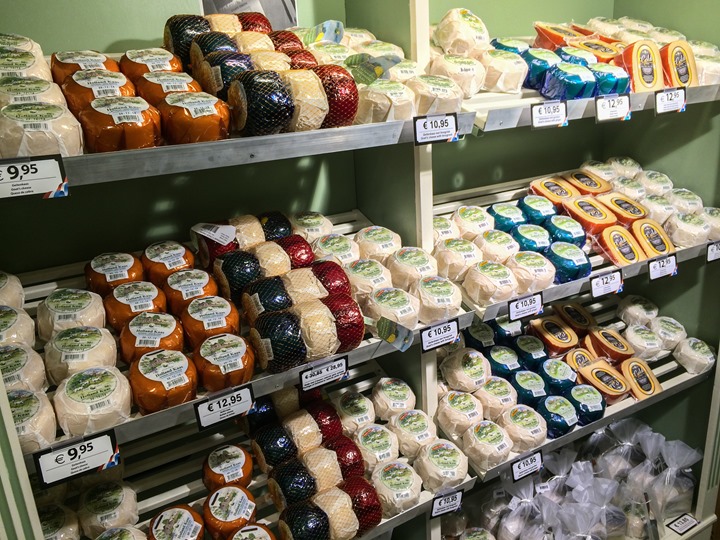 And that’s totally separate from the cheese consumed at canal-side café’s: 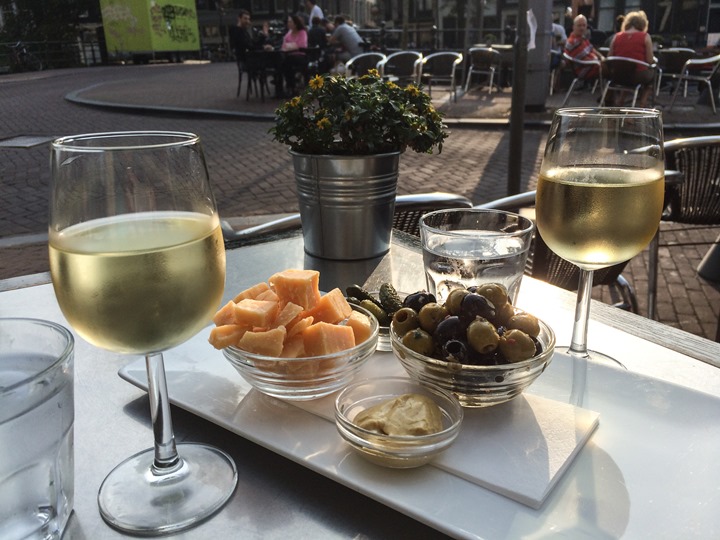 We took this trip to Amsterdam partly as a wedding anniversary trip, and the dinner below was our gift to each other as a “nice dinner out”. Since you might remember that The Girl has been wanting a bunny for a while?  Well, I got one for her: 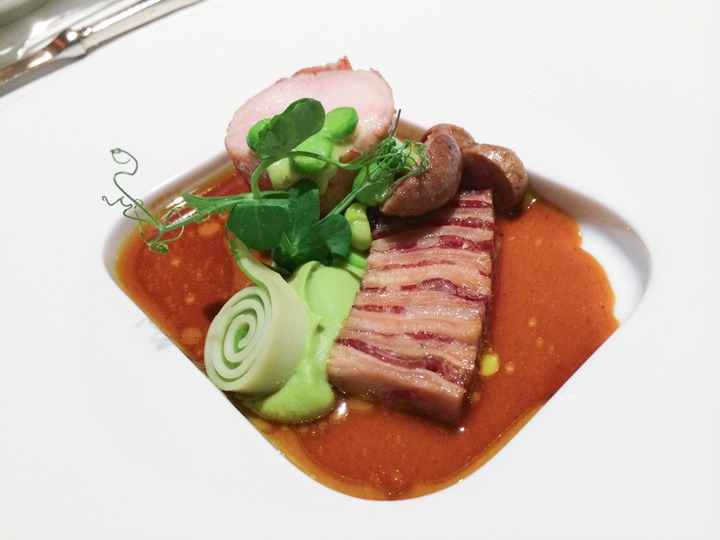 And, in case you’re curious – not bunny below, but rather pigeon. 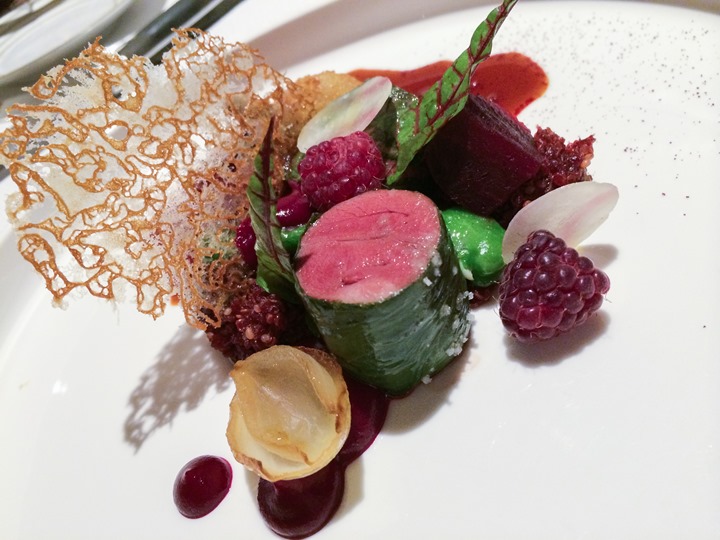 Yes…lots of food, and all of it quite good.  Very impressed on the Amsterdam food front.

Not content with just staying on land, we decided to try our hand at cycling on the water.  Given Amsterdam is a never-ending series of canals, this seemed quite appropriate. 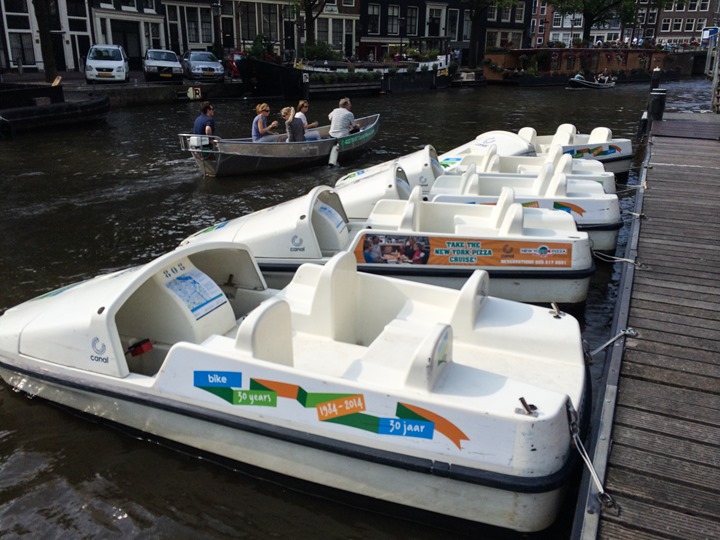 We rented it for about 90 minutes, though I unfortunately forgot to bring a GPS watch with me on the boat to save the track file.  But, we made quite good time (in our opinion). 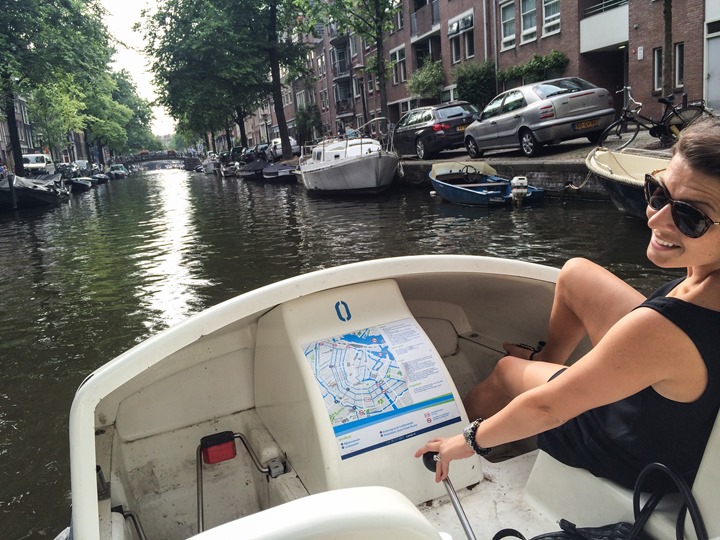 Plus, it offers an entirely different view from down on the water. 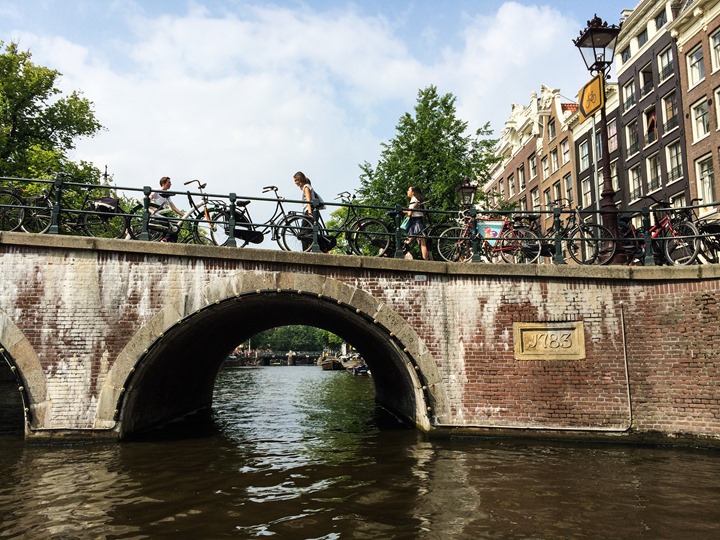 Though, just after we returned the boats we got to watch an absolutely epic $h!t-show go down at an immensely busy portion of the river as a traffic jam occurred with non-talented paddle-boaters combined with huge tour boats, random pleasure craft and the odd bachelor & bachelorette drinking boat.  It took a good solid 10+ minutes for this mess to sort itself out, as it extended well beyond the frame to the right and left at least a few hundred meters of backed up boats.

5) We headed back home, and went for a late night run

After a busy Sunday we caught the 5PM train back to Paris.  This was just about the perfect time as we didn’t get back home too late.  Below, cruising along past cow fields at a few hundred kilometers an hour. 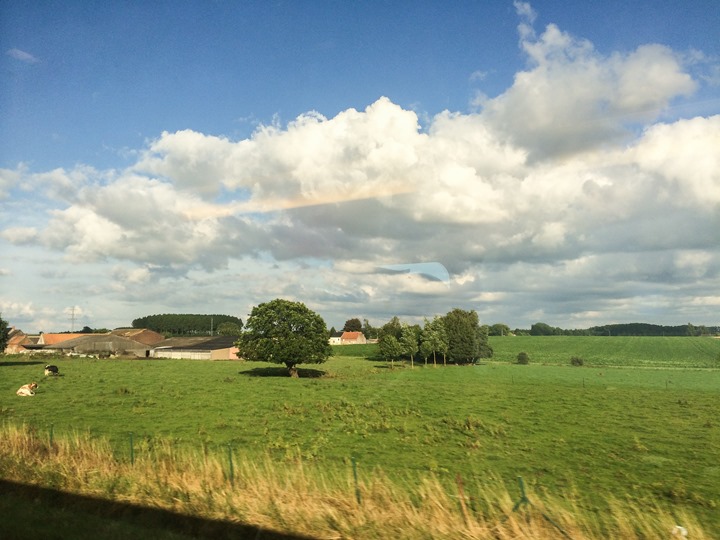 By time we made the connecting trains/etc we got home around 9PM, and within about 5 minutes I was back out the door for an 80 minute or so run.  The Girl would follow a few minutes later on her run as well.

(Oh, and I actually saw a DCR reader along the run.  Or rather, he saw me and we chatted for a minute or so before parting ways.)

It would turn out to be one of the weirdest/quietest nights I’ve ever run in the city.  Actually, let alone nights – just quietest times ever.  Not quite sure why.  Though, perhaps the World Cup game had something to do with it.  I got home with just a few minutes left before overtime, and then got to finish up watching Germany win it all. 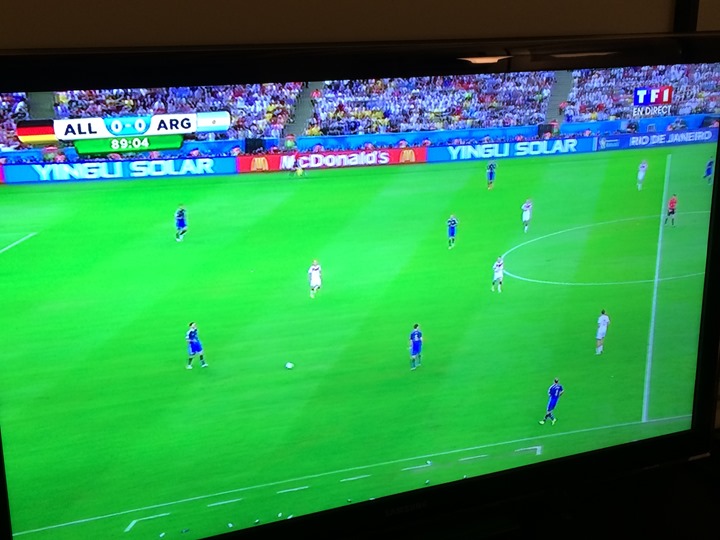 With that – hope everyone had a great weekend!

Of course, tomorrow is Bastille Day here in France (well, it’s not really called that in France or in French, but that’s the closest you’ll get in English).  Perhaps if people are interested I’ll do a 5 Random Things From My Bastille Day post…