The last weekend in February – already?!?  I feel like February just started last week, and now somehow it’s basically over.  In any case, here’s what I was up to as we split our time in both Paris and Barcelona.

1) Running to the Statue of Liberty

Saturday morning I headed out for a run along the river, past the Eiffel tower, onwards to the Statue of Liberty.  It makes for a near-perfect 10-mile run round trip from the front door. 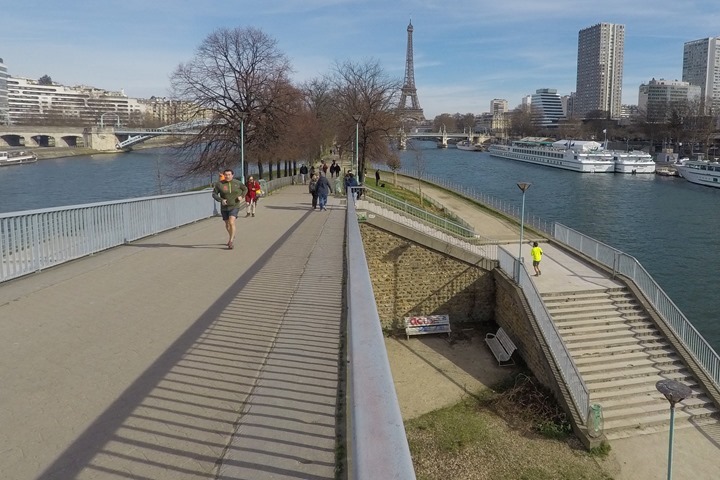 The Statue of Liberty here in Paris is actually a smaller scale version of the one sent to the United States by France.  Note there’s also a smaller edition yet in Luxembourg Park (also in Paris). 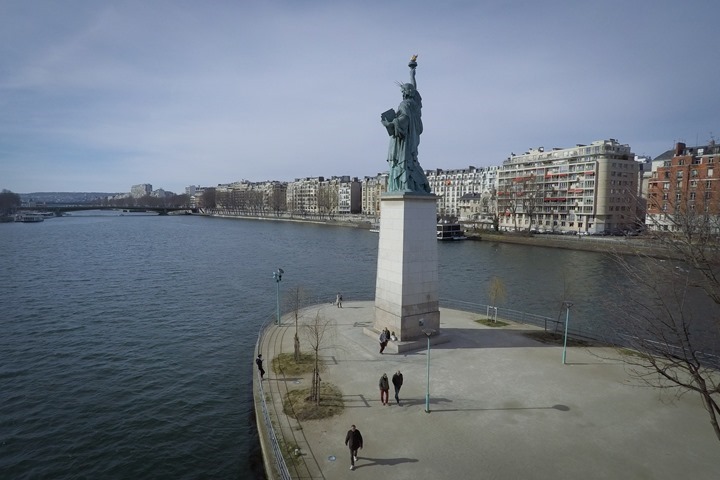 It was a beautifully sunny day out, and while a touch breezy, it was a nice temperature to run in.  No complaints! 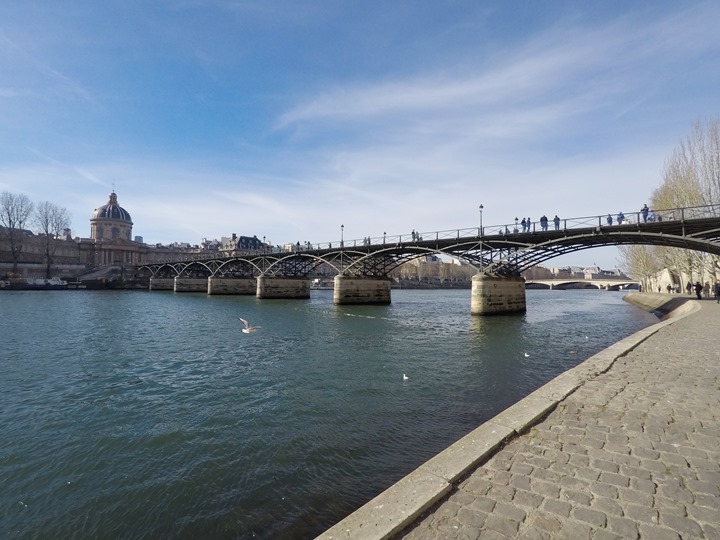 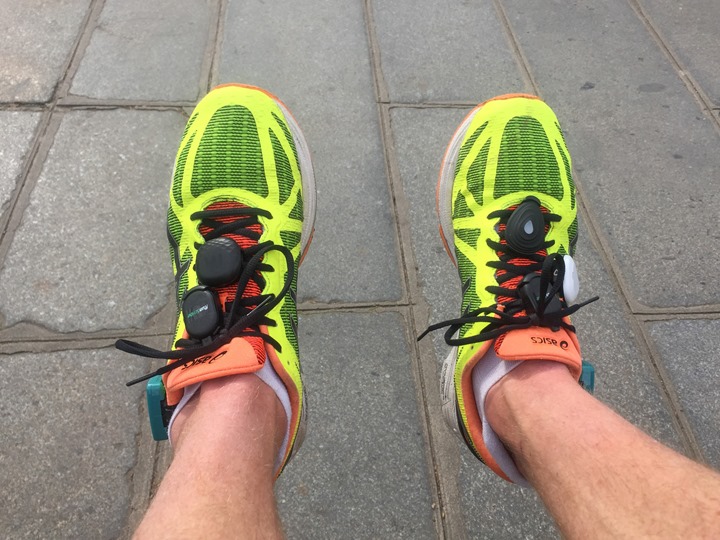 So much data collected.  Still not sure what to do with it all yet. 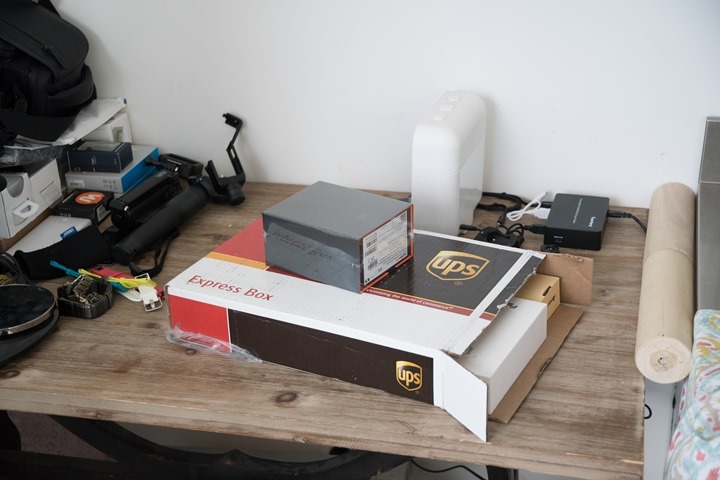 Of course more boxes came in…don’t they always?  It’s roughly one box a week from the US forwarder these days, plus random stuff from within Europe.  Friday’s shipment included the interesting Arofly “power meter” I’ve hinted at lately.  Looking forward to getting it installed later this week when I get back from Barcelona.  Oh, and the Xplova combined bike computer/action cam came in too. 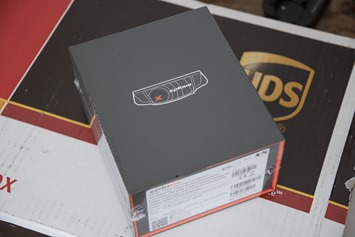 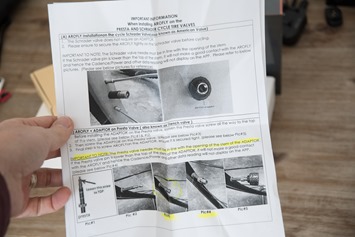 I put both of the above products in the camp of: Either they’ll be awesome, or spectacularly horrible. There will be no middle ground. Just a gut feeling.

Notably, the FedEx man has officially given up on delivering boxes to me.  Instead, he just gives them to the Paris Souvenirs shop below our apartment.  I believe he does it because it doesn’t want to deal with going up the elevator and then subsequent flights of stairs (the elevator doesn’t reach our floor).

On the flip side, it’s not all bad actually.  The souvenir shop folks are super friendly, and they’re there all day long until crazy late.  So if we’re out of town or just ran to get lunch or something, they accept the boxes for us.

Fear not, the UPS guy still loves us, and delivers to us.  And he’s cool enough to actually check both the Studio/Office as well as home addresses, despite what the package says.  Also, he’ll try a few times during the day at both places in case one fails.  He’s awesome.  Oh, and as for La Poste? Ha, any French person can easily answer what I (and they) think about La Poste.

3) A fancy dinner at friends

Saturday evening we headed over to our friend’s house for a relaxing dinner.  Both of us have small babies, both born within a few months of each other, and both expats from Canada (well, The Girl, not so much me), and both triathletes.  So they were well qualified to be our friends.  The fact that they were foodies was really just a bonus.

They cooked up a storm of all sorts of fanciness, largely from this amazing cookbook that I’d never heard of before (Trois Fois Par Jour, which translates to Three Times a Day): 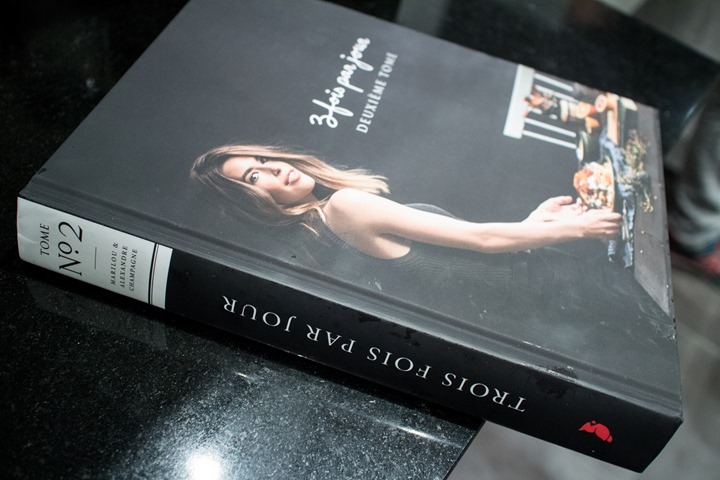 It’s all in French (Volume II), though maybe you can find it in English somewhere (I only see Volume 1 in English on Amazon).  Either way, the recipes they selected – including a barley risotto with duck confit, and a pistachio based pesto sauce like bruschetta were awesome.  Though, only my risotto picture came out. 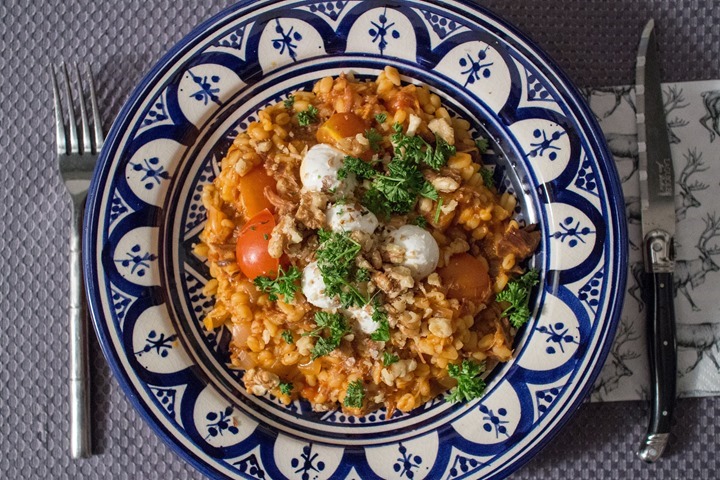 There was also a lot of wine consumed.  Because…France?

It’s pretty much cheaper than bottled water here.  Thanks guys for the amazing dinner!

4) Flew down to Barcelona 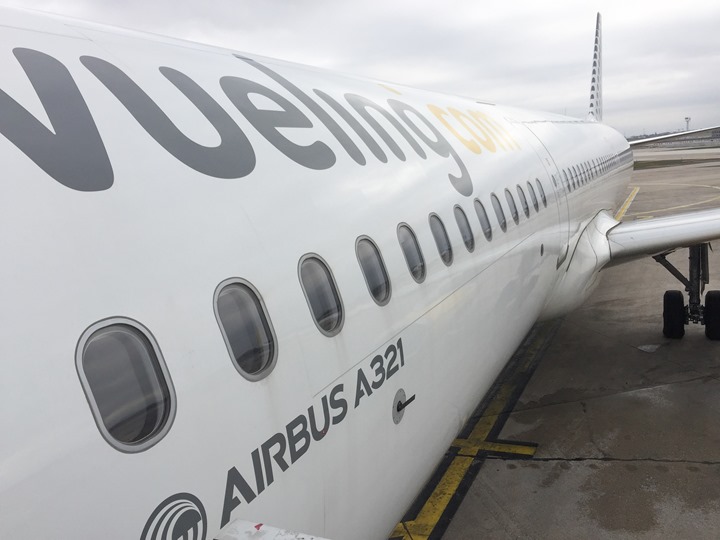 Sunday mid-day The Girl, The Peanut, and I all boarded a plane for the short flight down to Barcelona.  It’s about 75 minutes, so nice and quick. 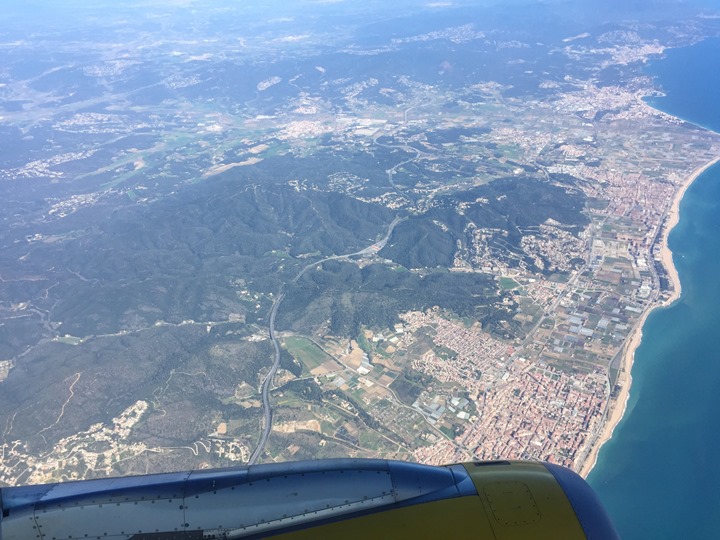 This week kicks off Mobile World Congress (aka MWC).  This event is typically more mobile focused, but in recent years has seen more and more wearables hit the scene.  Last year we saw a number of mainstream fitness companies (i.e. Garmin) announce new offerings here.  This year we’ll see it flip back more towards the traditional phone makers who are now peddling wearables as well.  So companies like Huawei, which introduced two new Android Wear watches yesterday, or LG a week or so ago.

But I usually find other tidbits from smaller start-ups here.  For the most part this isn’t a big show for me.  It’s just super easy to fly to from Paris, and the weather is nice here. 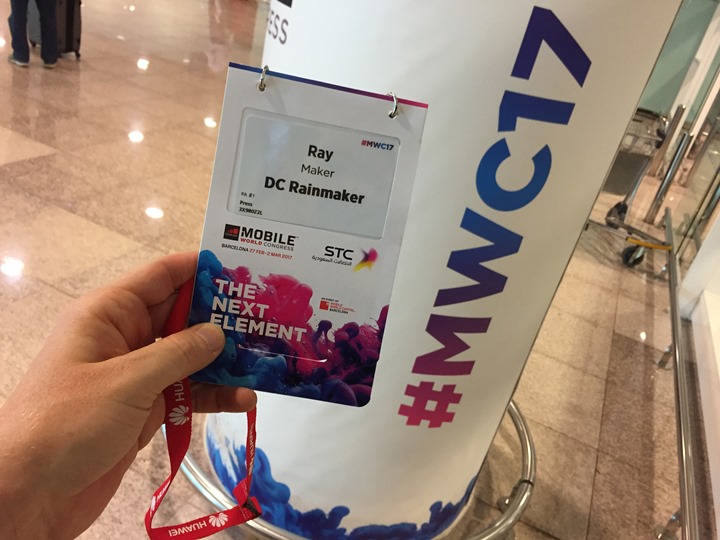 So I’ll stay in town for much of the week and use the area to get other product review stuff done that would normally be tricky in Paris this time of year (namely openwater swims).

5) A chilly openwater swim along the beach

Speaking of openwater swims…after getting settled at the Airbnb, it was off to the beach.  While we’re staying further from ‘downtown’, we’re only a block away from the beach.  A happy compromise I’m more than willing to make.

The water temperature here at the moment it quite swimmable, at a nice warm 13°C/56°F.  Interestingly, the sea temperatures are actually done by NOAA satellite.  Who knew?  Of note is that my watch matched the temperature within 1°.  Not too shabby!

My route was a meander from one pier to another one a ways down the beach.  The water had a fair bit of swell in it, something not easily seen from shore, but once you get beyond the piers, it becomes more noticeable when the tall buildings and horizon disappear from view often.

Tomorrow I’ll go longer, but I didn’t have a ton of time before needing to get back.  Still, snapped this nifty shot at the water’s edge while trying to get a selfie.  Which, I suppose I technically got – but just wasn’t expecting the wave. 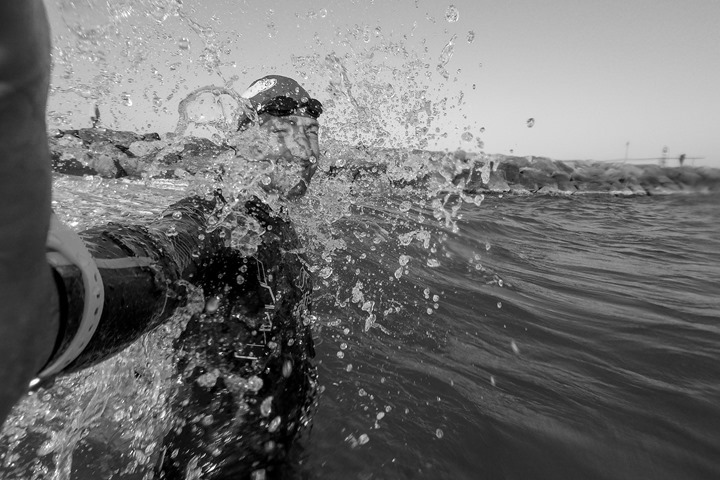 The above was taken on a GoPro Hero5 Black, which is what I used for the whole swim.  The waterproofing is really key for why I use that specific cam anytime I’m near water.  Just simpler that way.

In any event, The Girl was following along from shore: 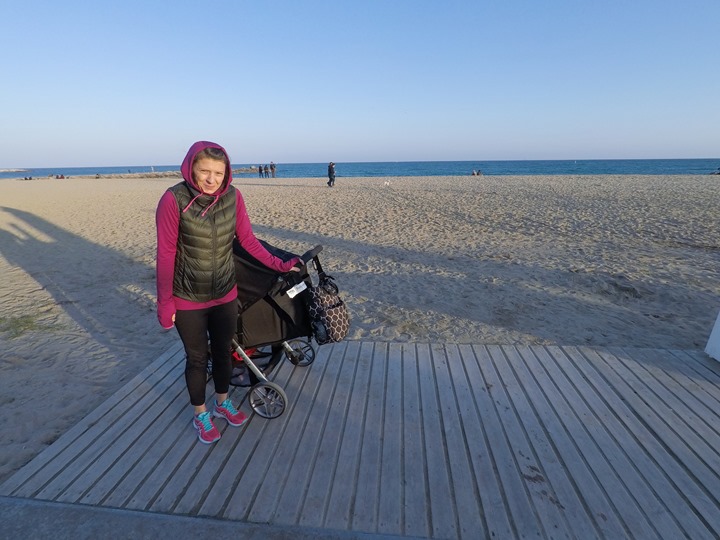 She was just watching for my bright orange swim buoy in between the swells. 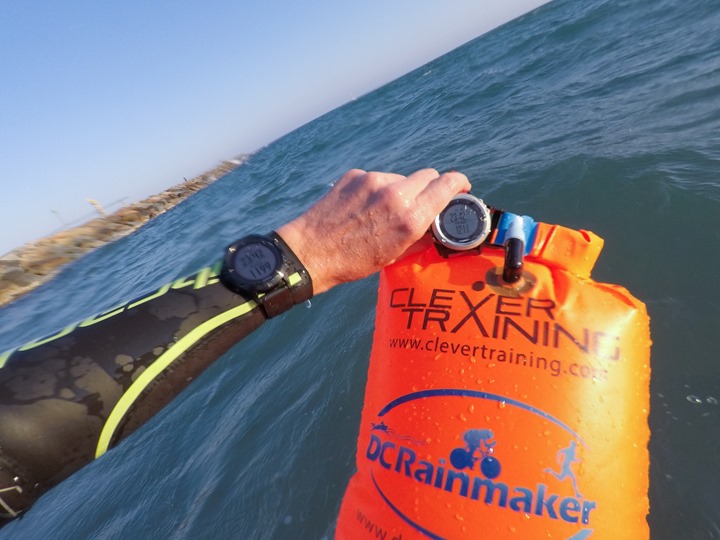 Oh…one funny tidbit: Mid-day Saturday I went to go find my wetsuit and realized that I never got around to getting it replaced after that shark incident last summer.  Well crap.  Definitely wasn’t useable.  Thankfully, my friend Julio has no desire to swim in February in openwater, so I was able to snag his wetsuit for a few weeks.  Wootage!

With that – thanks for reading! And check back later today for the WatTeam PowerBeat Gen2 In-Depth Review, it’s already scheduled to publish at 3PM CET/9AM US ET.