Third time’s the charm! And so it was – the 3rd annual DCR Open house this past weekend.  This year I had folks from not only all across Europe, but also even the US join in!  Plus, we had more meat and cheese than ever before!

Like last year, there were two parts to the day.  To begin, on Saturday morning we held a group run around Paris, about 12K worth.  Then following later that evening I cracked open the door to the DCR Cave!

First up was a run around the city center of Paris. We started off around 9AM from the DCR Cave/Studio, and then walked out to the bouquinistes boxes along the river to get GPS signal.  And of course take a quick starter picture. 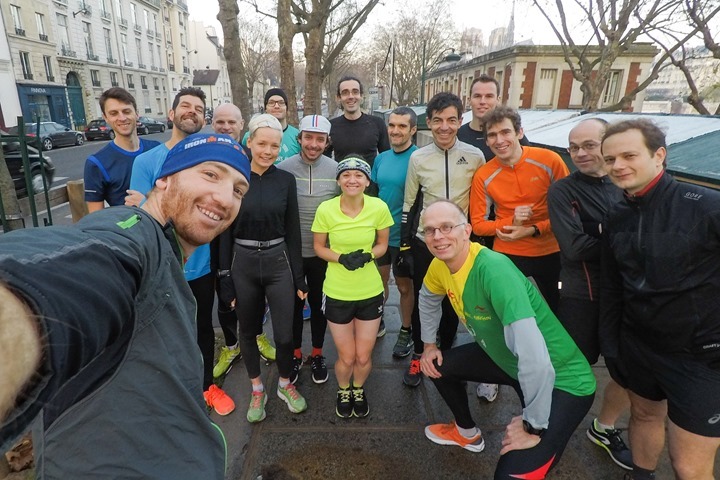 This would serve as proof of life in case we lost anyone, though one person joined us later in the run – so we could only hope we wouldn’t lose them.

From there we crossed a small bridge past Notre Dame, then it was down along the river on the now closed road.  This time of the morning though it was desolate – perfect for running! 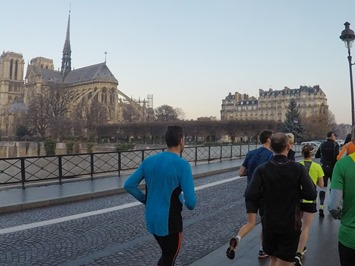 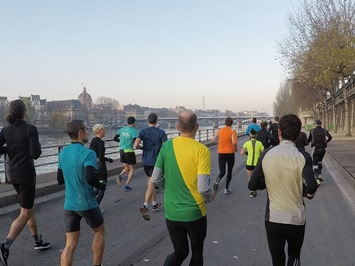 Despite the forecast being a bit chilly, it was actually a rather pleasant running temperature.  Plus, it was even a bit sunny out, and no wind at all. 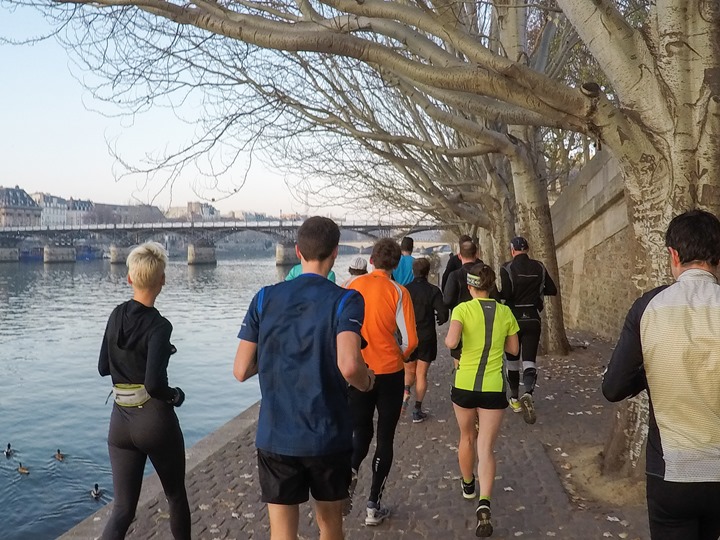 From the river we routed our way up to the Louvre, pausing for a photo in front of the famed pyramid before continuing on. 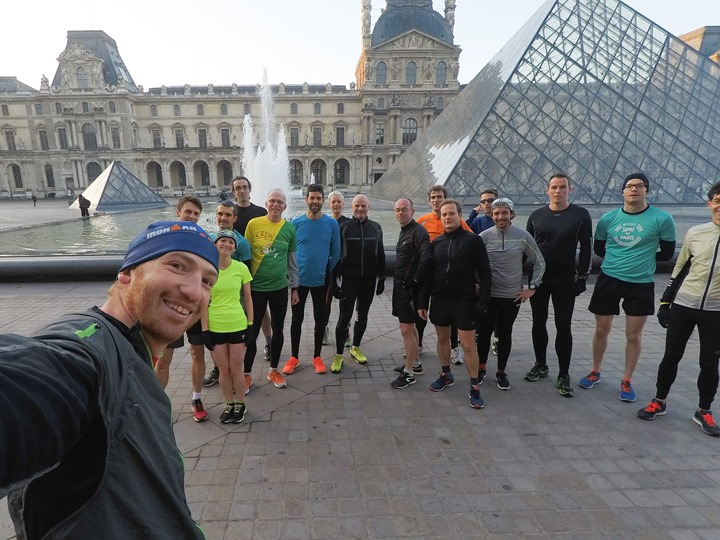 We’d then cross the Tuileries gardens before rejoining the river in our quest to reach the Eiffel Tower. 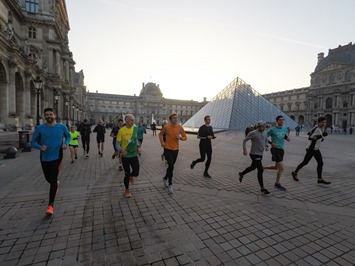 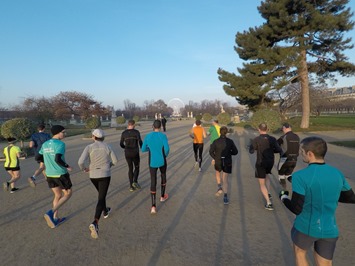 At last – the Eiffel Tower (plus, nobody lost yet!).  The backlight sun made it a wee bit difficult for a photo, but I think it worked out.  Well, minus my big head blocking the view of one person. Sorry! 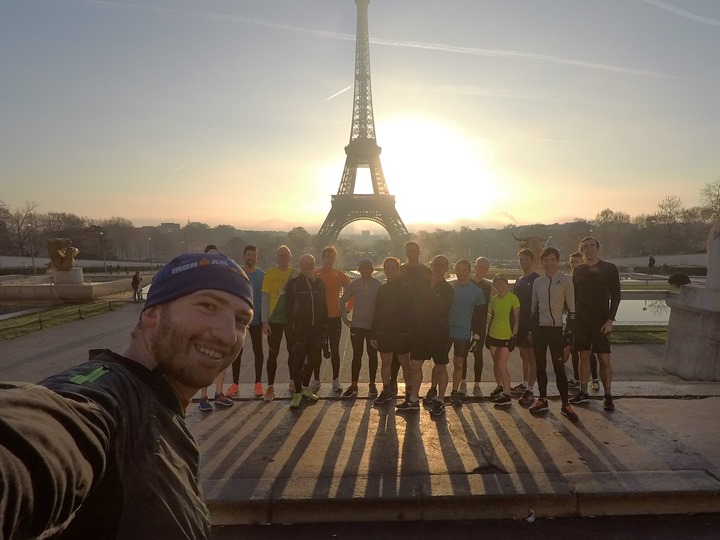 Plus, as we ran down from Trocadéro, I got this awesome shot. 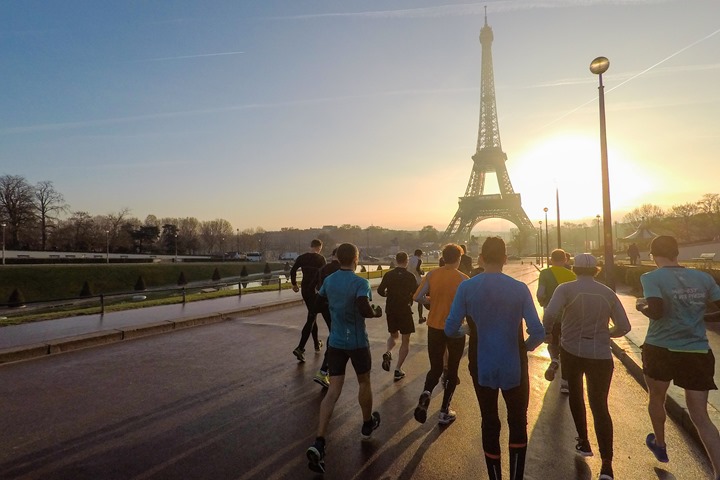 Since we weren’t quite sure if the backlit photo would turn out, we briefly paused for one more photo near the bottom of the tower: 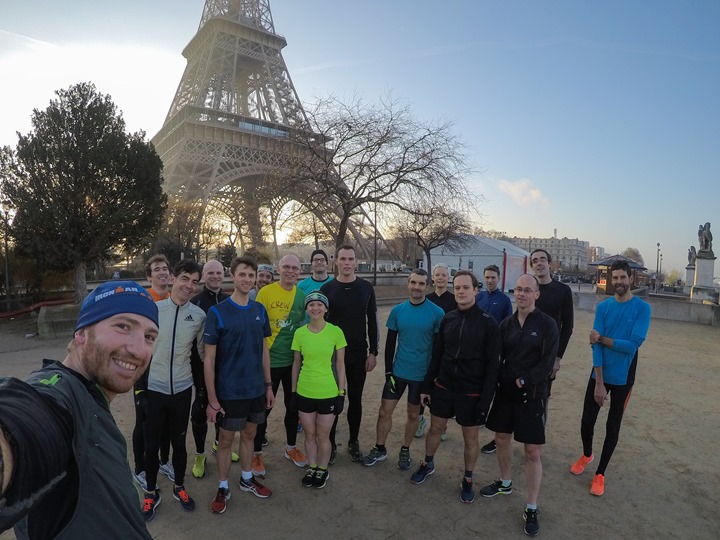 From there it was back along the river home.  Of course, there was the 100m sprint, as marked on the pavement on Les Berges: 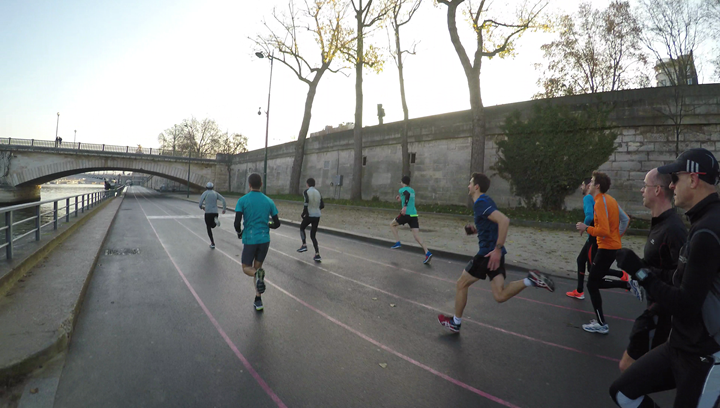 Once back at the Studio, The Girl had freshly baked banana bread (with Nutella swirls), plus some other goodies.  Meanwhile, cupcakes for the evening baked in the ovens nearby. 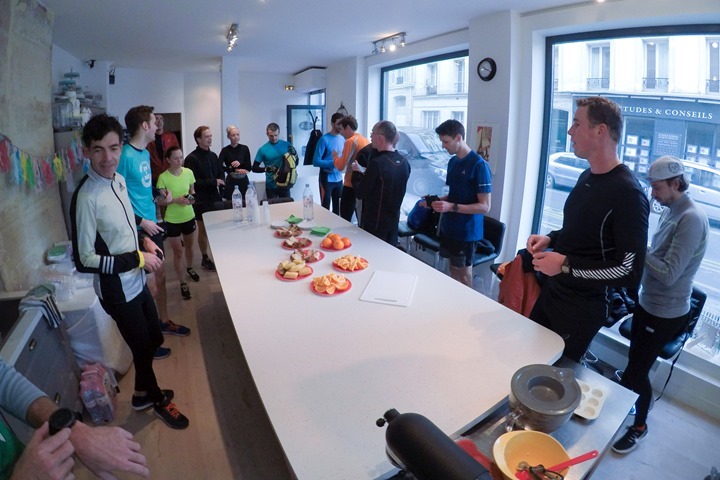 Here’s the run on Strava, which also has many of the people on the run uploaded to as well (as Strava automatically shows them).

This route is one of my favorites, and is listed in my Paris Swim/Bike/Run Resources guide (right next to my Restaurant/Food Guide).  Oh, and in case you were wondering – everything on this run was shot with a GoPro Hero5 Black.

Thanks to everyone that came out in the morning!  It was fun chatting with everyone during the run, and we managed to score great weather for it!

Next up we had the main event – the DCR Open House!  This was held within the DCR Cave and Bertie’s Cake Studio (upstairs is The Girl’s space, and downstairs is the the DCR Cave).  Like last year we were definitely beyond the normal limits of the space in terms of people, though this year I was smart enough to run the air conditioner the entire time, which kept the temperature roughly in check (yes, even in the middle of winter). 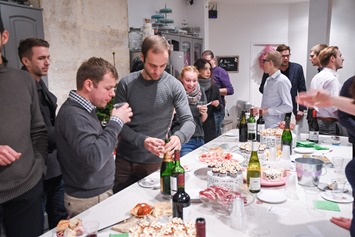 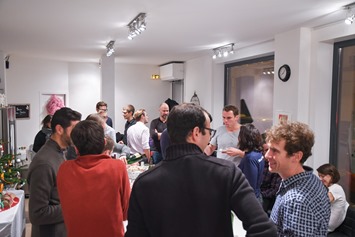 As noted before, folks from all over Europe came, and even someone who was in town for the weekend from Washington DC came!  She was sporting my most favorite DC Tri Team shirt!  Boom! 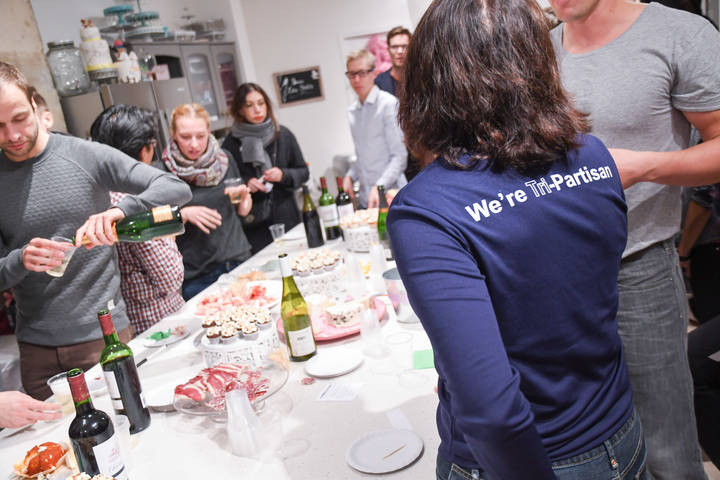 This year we doubled down on food, with a massive meat, cheese, baguettes, and cupcake spread.  Because everyone wants cupcakes, right? 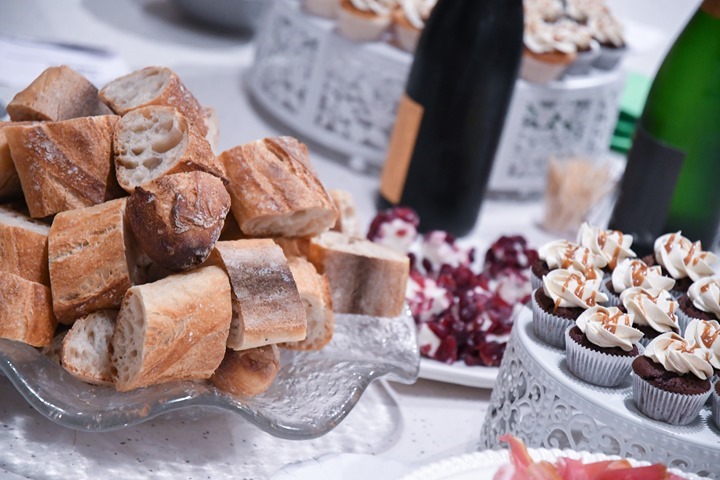 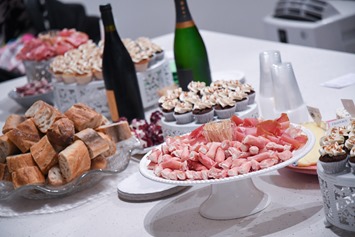 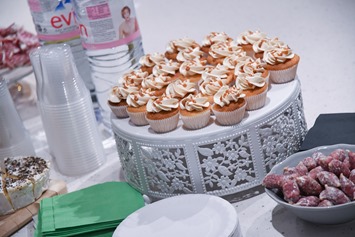 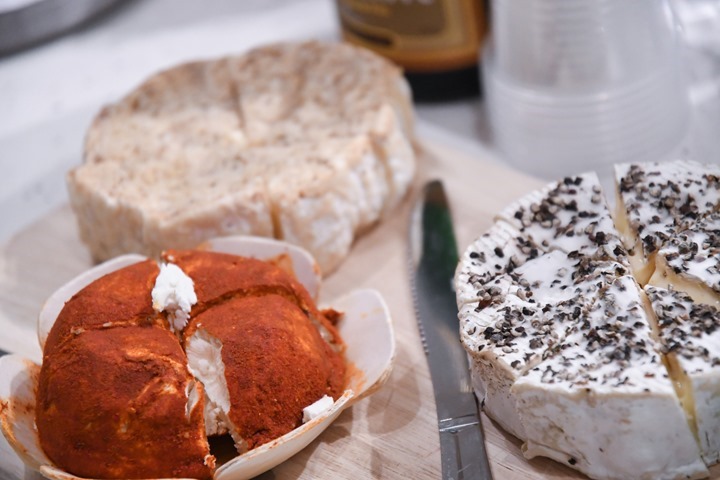 And then as is tradition, we also had a little Christmas tree setup.  Though somehow we couldn’t find the star for the top of the Christmas tree.  Not sure what happened there. 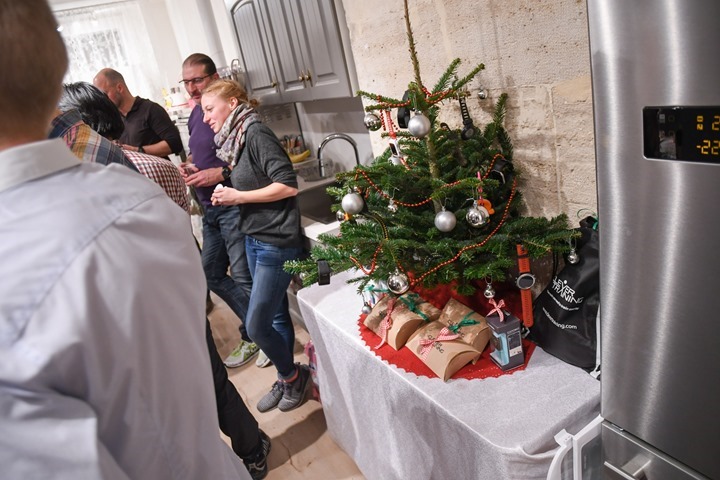 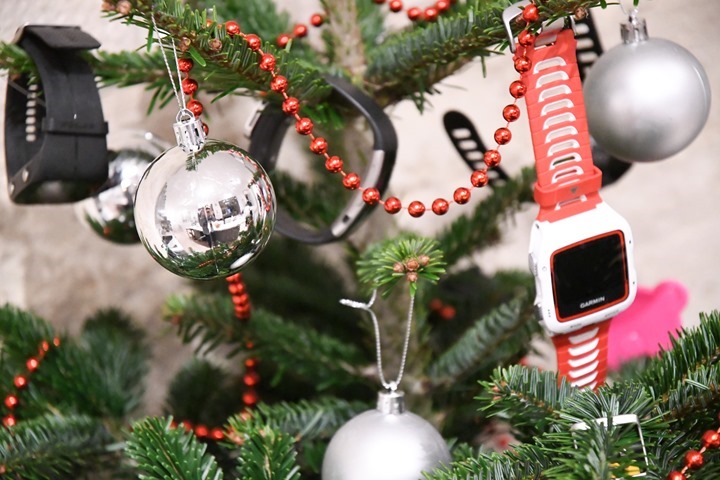 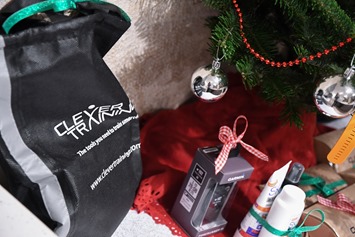 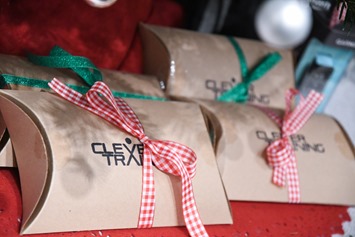 Last year we held a contest/quiz for those prizes, but with this crowd well into a few cases of wine, that seemed like an unnecessary complexity for giving away gifts.  Plus, it meant more work for The Girl and I.  So instead, we just had everyone put their names in the bucket (it was from our wedding), and then we gave away goodness from there. 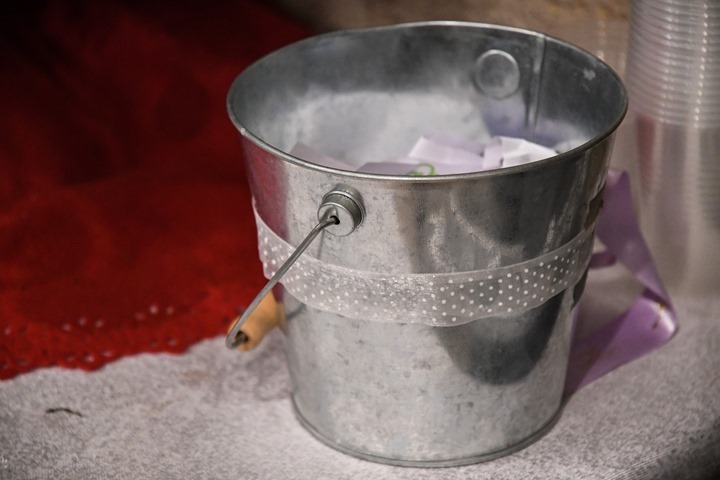 And of course folks could check-out the cave downstairs, or as it was for one couple – try riding my noble stead, the Cervelo P3C.  We’ll see if they want to post the pic below in the comments. 🙂

As I’ve found previously – Zwift in ‘watch-only’ mode makes for a great screensaver, and that was the case this night as well.

Plus, I used the TV mounted near my drone section to play videos from a playlist of ‘pretty’ drone videos I have.  Basically, just cinematic videos (non-explainer ones, the full drone playlist is here).  You can check out that playlist here.  One can see the (very slow) progression of my video editing skills.

Speaking of the cave, let’s dive into a quick cave update! 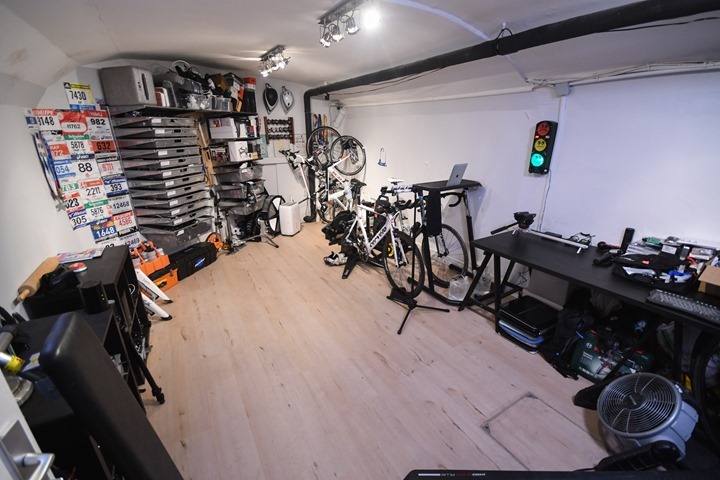 It’s been a few years since I’ve done a cave walk-through, so I figured now’s a great time to do so.  So this evening I shot a full walk-through of the cave, explaining what’s changed since a few years ago.  Including what I like, and what I don’t like.  I think YouTube is the best medium for that, so let’s dive into it here (ok, it ended up a bit long!):

With that – thanks to everyone that stopped by over the weekend at either of the two events.  It’s awesome to be able to chat with folks about all sorts of topics (not just sports tech).  And in general, if folks are making the trip to Paris I’m usually happy to show the DCR Cave. Simply get in touch via the contact form.  Though, I can’t promise it’ll look as clean as in the pics above, as that pretty much only happens one day a year.

Plus, as Einstein said: “If a cluttered desk is a sign of a cluttered mind, of what, then, is an empty desk a sign?”

Oh – and as for the Santa 10K Race on Sunday? Stay tuned for that goodness tomorrow morning!