Back home in Paris!  Here’s what I was up to over the weekend, which was actually somewhat calm (and filled with lots of sleep, finally!).

1) Riding with the Mavic 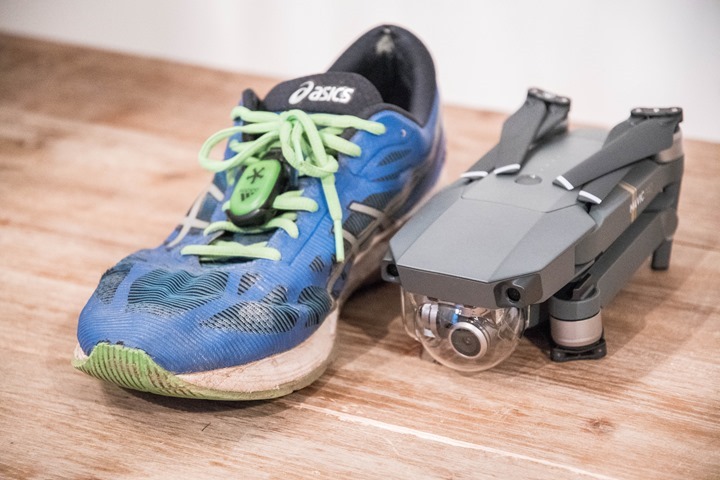 With the GoPro Karma review behind me, it was onto what most people are interested in – which is the DJI Mavic.  This unit does have follow-me modes (though not as useful as Airdog), but it also has vastly more cinematic modes than the Airdog does.  It’s just a better all around drone than Airdog, whereas Airdog is better at pure sports action (without a secondary pilot).

So I got that all unboxed, which you can find here in The Queue (yes, it lives again!). 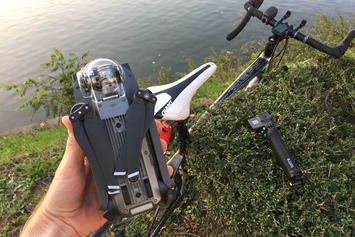 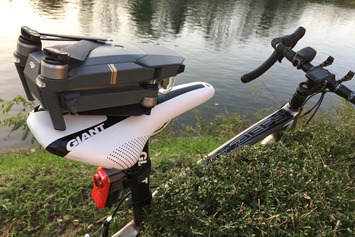 I then went for a bit of a ride outside of town.  Drone laws in Paris means drones are a no-go within city limits.  So I head out to a few different places in the surrounding area to fly.  Thus I rode along the river a ways to one.  I wasn’t really shooting much else here, so it was mostly just basic flying/testing.  If I was doing review shooting, I’d go somewhere else. 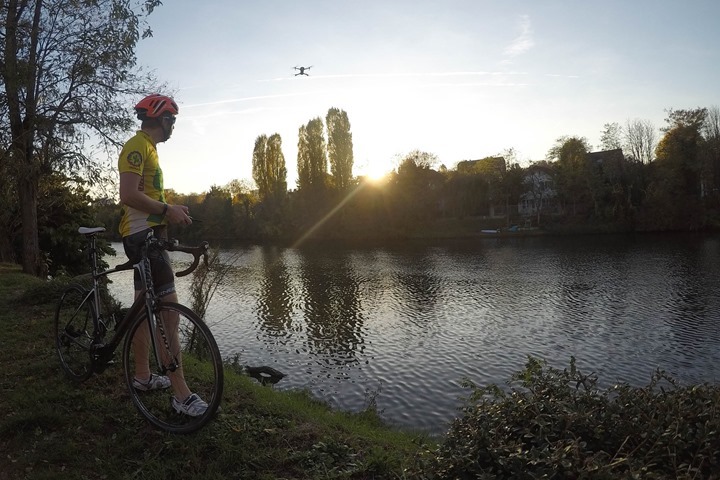 What is most incredible is really just the size of this drone.  It easily fit in my jersey’s back pocket.  All of it.  The drone, the controller, my phone, keys, a credit card, and even the GoPro 3-Way selfie stick with a Hero5 Black attached.  All of it fit. 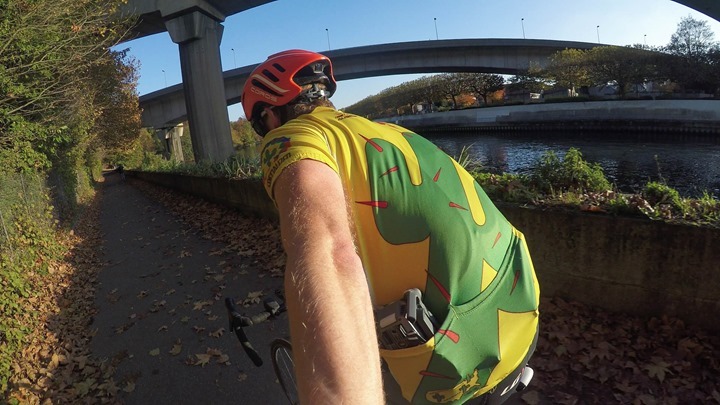 The drone itself was awesome, as you’d expect.  I was in the right target range for battery life (on target for about 25 minutes flying), and the video was super crisp assuming you remembered to focus. 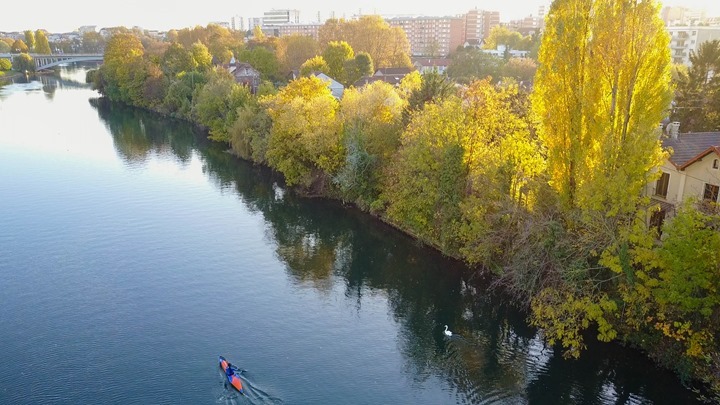 After I was done, I headed on home.  I’ll do some more flying this week out of the city.  While I had hoped to get the DJI Mavic review out this week, The Girl needs some assistance in the bakery for some bigger orders this week.  So I’ll be pushing the Mavic review to next week, and knocking out some watch reviews this week (which don’t take as much time away).  Still, look for some stuff on YouTube over the course of the week.

When I returned last week from Colorado, it was with a whole crapton of stuff in tow.  One of the benefits of flying a million miles on United over the last few years, is I now get three 70 pound checked bags.  Oh, and The Girl gets matched status.  So that’s six bags each.  And technically, The Peanut also gets some number of bags too (it’s complicated figuring that out).

When we landed, we took up every bit of space in the van that picked us up.  Had we been thinking a bit more, we would have simply had the driver stop first to drop off the trainers at the DCR cave (it’s on the same street we live on, just 150m earlier), and then continued onto our house.  But after a sleepless redeye flight, nobody was thinking.

Which meant this week I had to finally get not just the two trainers I brought back down to the Studio/Cave, but also the Kurt Kinetic Smart Control trainer that showed up.  So first, it was down the stairs to the elevator: 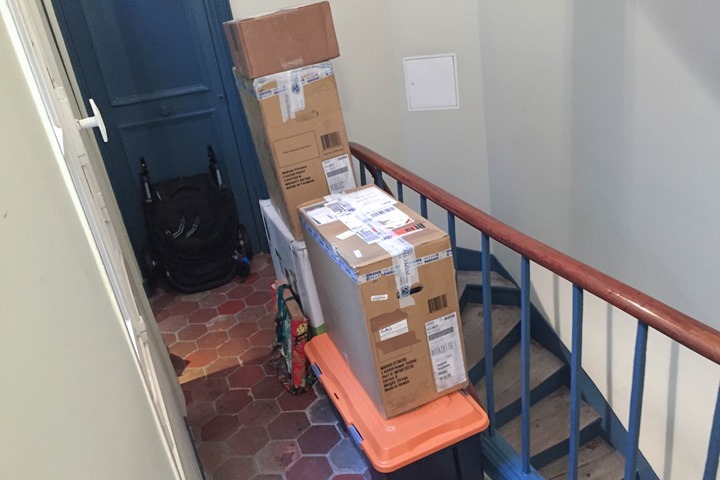 Then into an Autolib I grabbed: 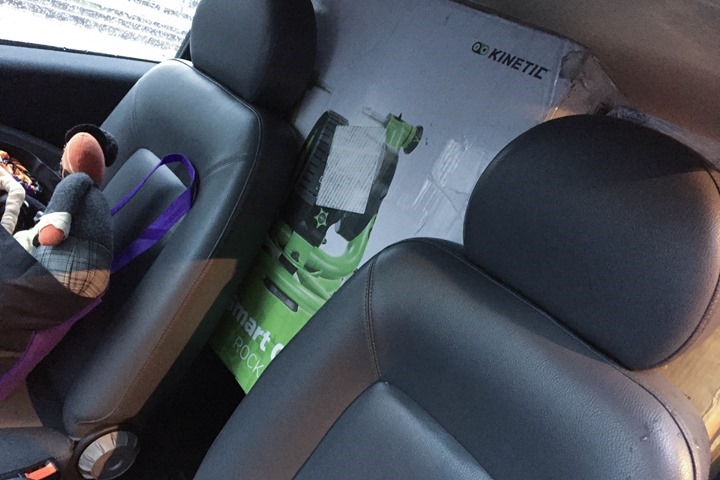 Then out of the Autolib: 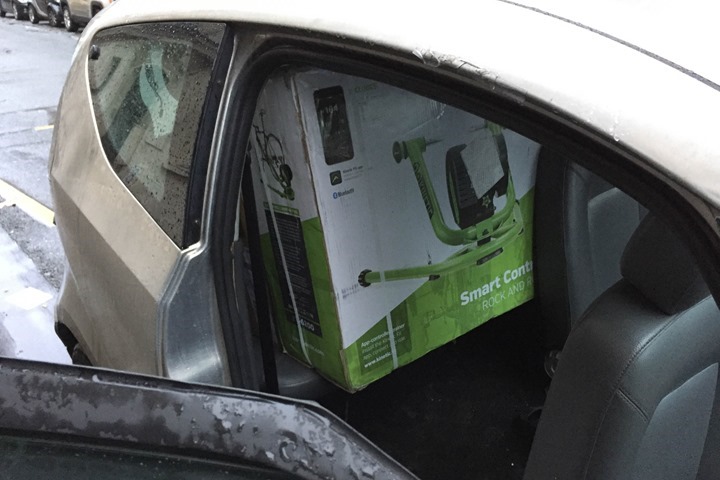 And finally, sitting in the doorway of the Studio. 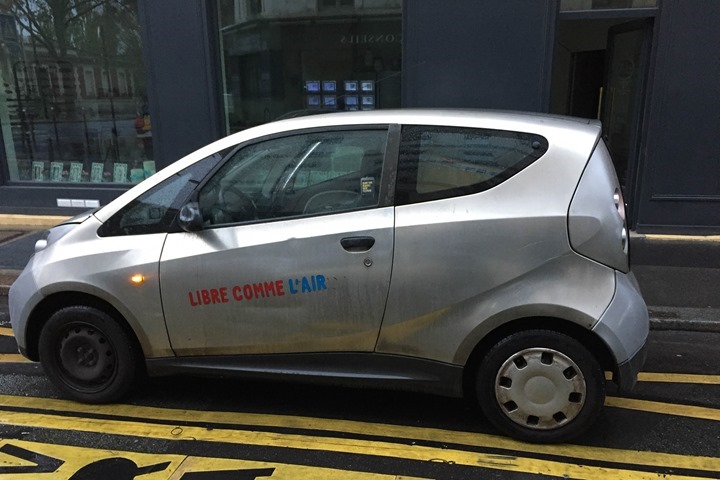 I’ll deal with getting them unboxed tomorrow.  And yes, I also had to take down some Halloween decorations, from our party a few weeks ago, to long term storage.

Sunday afternoon I had about 90 minutes to escape the house and get in a ride (plus get back).  With it raining sideways and chilly, there was approximately zero chance I felt like going outside.  Not so much because I mind the rain, but because with the amount of time I had, I’d largely be city riding – so it would not have been that good of a workout.

So I headed down to the DCR Cave to knock out some time on the trainer.  In this case, the Tacx NEO.  I generally gravitate towards it versus others, probably just because of the entertaining road pattern/feel stuff in Zwift. 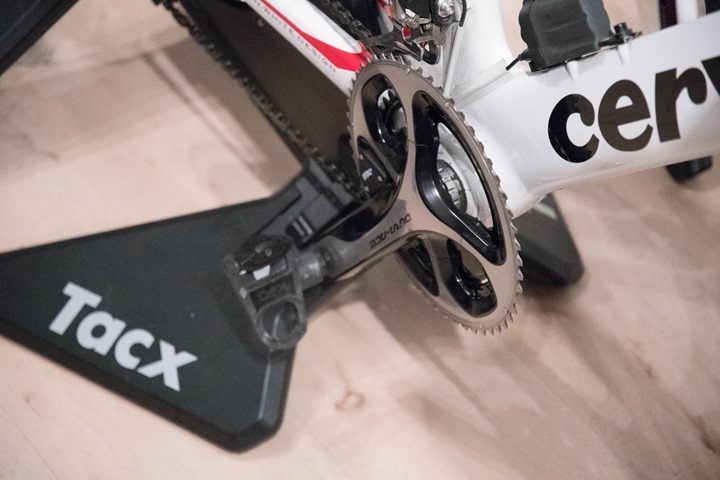 Of course, as is always the case when I return from trips – none of my stuff is properly charged up.  So I burned a bunch of time getting a second Edge to record the new dual 4iiii power meter data.  Then spent more time figuring out which ANT+ ID was which, since I’ve got a bazillion broadcasting as power meters down there with trainers plugged in.

All of which left me with about 40 minutes of actual ride time. 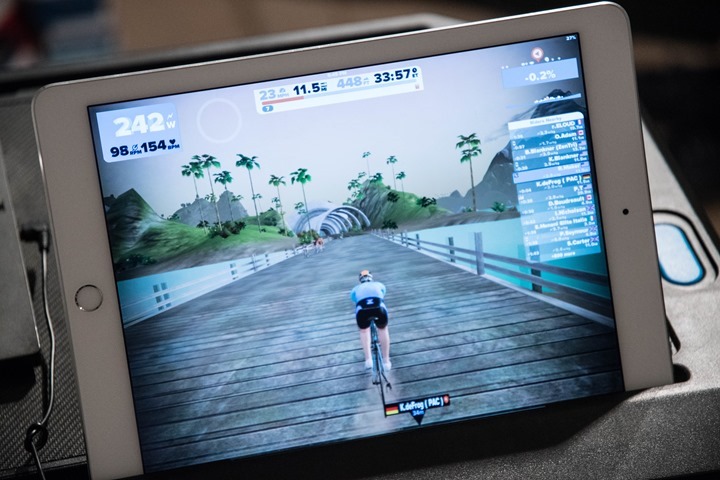 I continue to love the KICKR Desk, simply because it holds the iPad and iPhone upwards.  I know there are far cheaper solutions, but this just works well for me.  I do really wish it had a way to lock the wheels though, since the DCR Cave floors aren’t level, so I have to use random weighted objects to keep the cart in place. 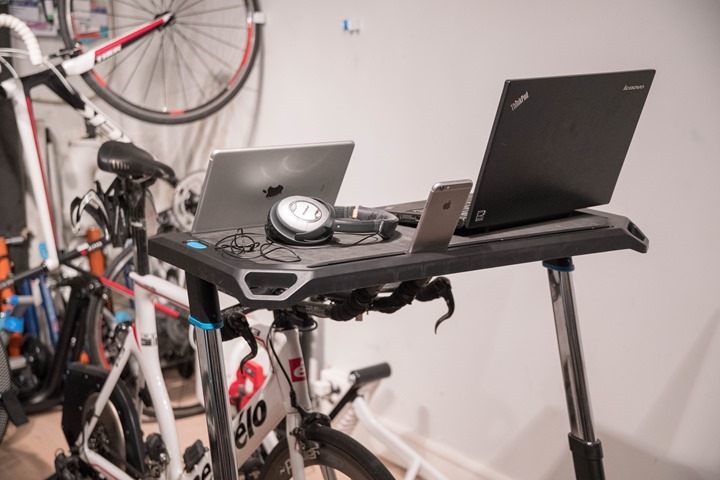 With the ride done, it was quickly back to the house to give the Girl a hand with the babe.

Coming with much of that same box of stuff from my US trip was also a slew of gadgets to unbox.  Some of them, like the DJI Mavic, actually arrived direct to France and were waiting for me upon return.

While others were things that were sent to me in the US, either from companies or items I bought.  For example, Apple shot over an Apple Watch Series 2 Nike edition in there: 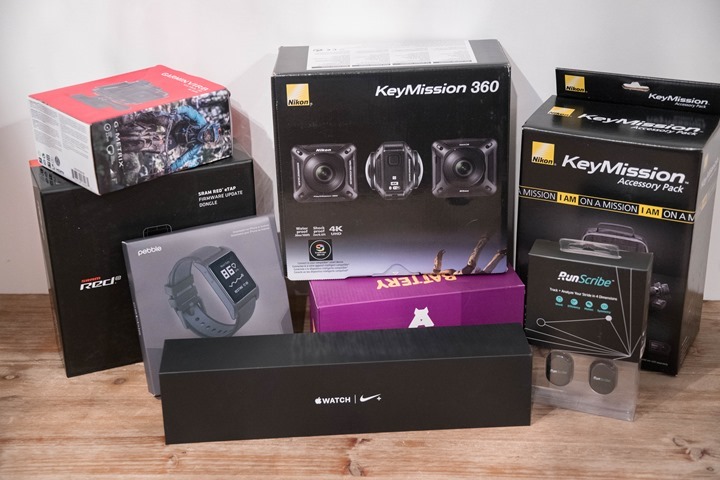 And then I bought the Nikon Key Mission 360° Action Cam.  Maybe it’ll suck less than all the other 360° action cams I’ve tried.  Plus I picked up things like SRAM RED eTAP for my road bike (going to convert that over).  It’s funny, the entire massive eTAP box contents (seen here) fits into one tiny box when consolidated.  And that still has room left over.

Also in there was my retail VIRB Ultra 30, after sending back the media loaners.  Then the Pebble 2 HR, which I picked up on Kickstarter.  Along with a super-old Kickstarter order of an extra Airdog battery.

You’ll also see in there the RunScribe’s new Gen2 units too.  I’ve actually run quite a bit with RunScribe over the last year, I just haven’t quite caught up on posts there for a review.  I suppose sometimes that’s the case for lots of products that I’ll try out but may never make review status.  However, I find that having tried so many products is useful for everyone, even if it never makes the full in-depth review limelight.  I can then speak about the product, versus just shrugging my shoulders without an answer.

5) Breaking out the Sous Vide Circulator

It’s been a while since I used the Sansaire sous vide circulator.  I guess I’m less inclined to use it in the warmer months, plus, it’s been a bit busy around here.  But now in the cooler months it feels like a better time to do more hearty dishes.

Tonight I just went with a simple warm-up of doing steaks this way.  I had grand visions of something more creative out of the Modernist Cuisine at Home book. But alas, our collective wake-up time on this Sunday put the local markets out of reach. 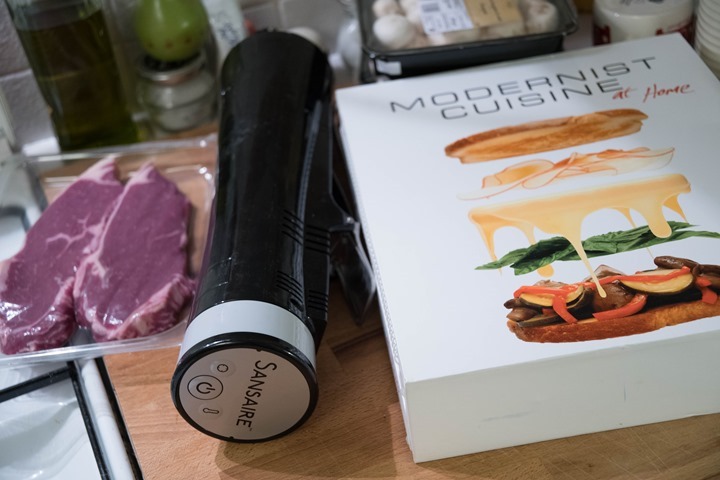 I’ll experiment with more complex dishes over the coming weeks.  I know the company recently did a Kickstarter for their new Delta circulator, but a spring delivery just seems too far away to be logical for me.  Plus, I already have a gizmo anyway. 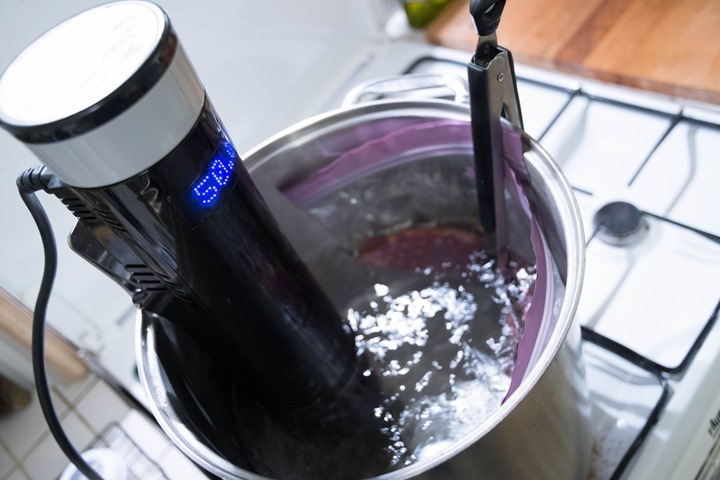 I made a bit of a mushroom sauce to go over it, nothing fancy.  And then roasted some butternut squash and sweet potatoes with brown sugar and butter. 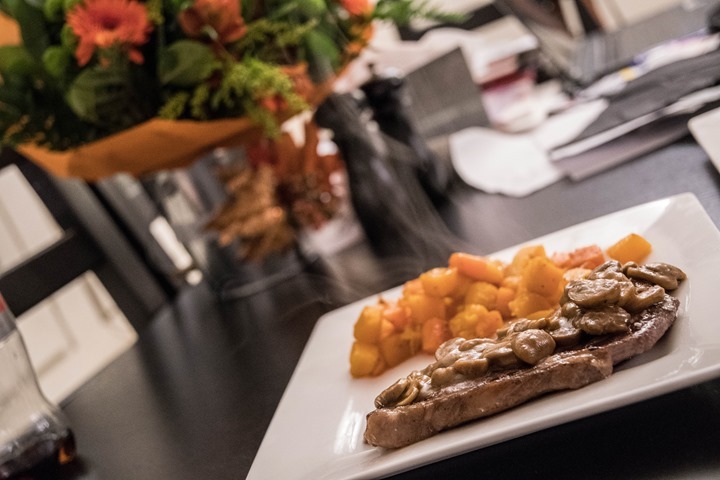 For the non-cooking portions, The Peanut helped out (including a trip to the grocery store).  Once the front burners were lit though, she headed off to play with her light-up turtle. 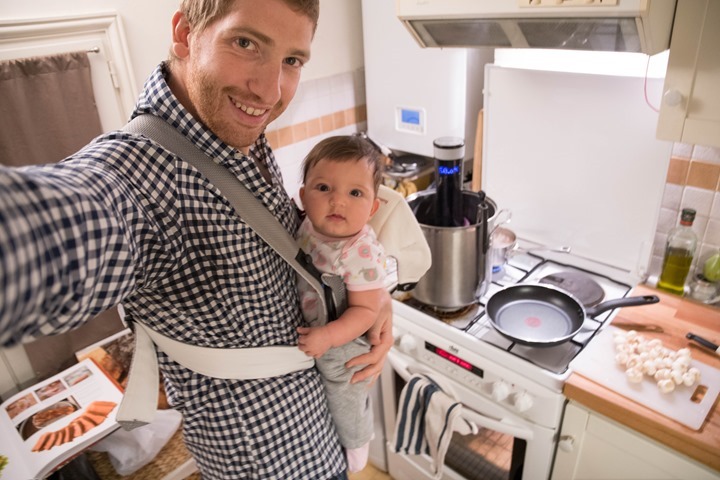 I think next time I’ll definitely be doing ribs. We’ve gotta hit up the restaurant supply store tomorrow night for a bakery supply run, so I figure I’ll pick out something good while perusing the meat department. 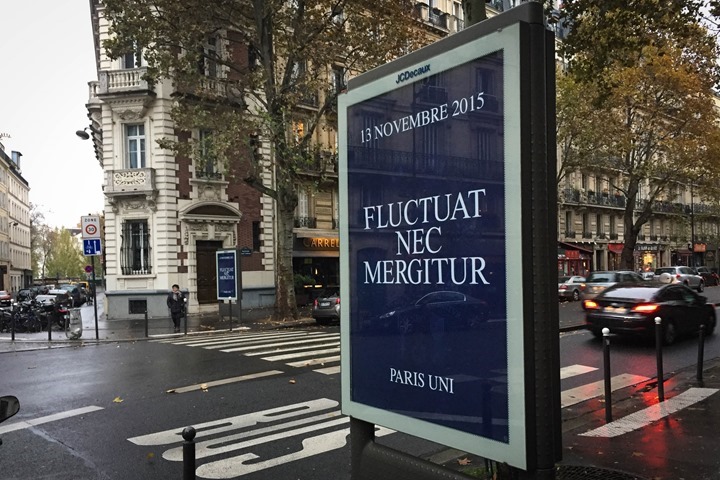 So there’s six items this week.  I wrote everything, and then realized I didn’t make room for something that’s pretty important around here – which is the first anniversary of the attacks last year on November 13th, 2015 in Paris.  There were a number of special events going on around the city, though even on the streets near us many of the normal advertising spots were converted into remembrance posters.  The signs read “Fluctuat nec Mergitur” – a Latin phrase which means “Tossed but not sunk”.

I wrote about that day here.

I’ve talked at times about how things have been different since then.  If you were to watch the news in the US or Canada, you’d probably assume it was a war zone here.  But in reality, it’s pretty much life as normal for those of us fortunate enough to not have been directly impacted by the attacks.  For the many who lost loved ones, it’s no doubt still a painful nightmare.

But everyday life in a city as large and vibrant as Paris goes on.  Sure, there’s a bit more security now when entering areas people congregate, albeit many people incorrectly see the occasional soldier around the city and assume that’s a response to the attacks.  They’ve actually been doing the rounds since around 2006.

Cafes, restaurants, events, and numerous other aspects of life in Paris have long since returned to normalcy.  The only element that hasn’t?  Tourism.

It continues to be incredibly hard times for tourism here in the city, impacting everything from hotels to small restaurants, tourist activities like cooking classes, and even we at the bakery have seen a dip.  So if you’re thinking of visiting the city – there’s no better time to enjoy it than now.  The summer crowds are gone, and all of the holiday aspects are starting up. The best thing we can do to honor this city is to keep moving forward and not holding up inside. So I sincerely hope to see you soon visit the city soon! 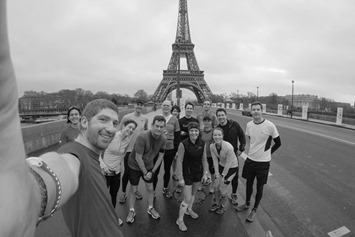 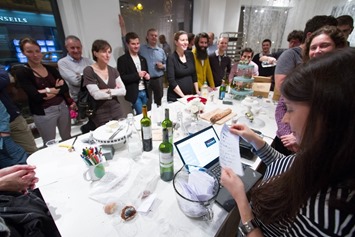 Just in case you missed it before, we’re precisely a month from the 3rd Annual DCR Open House, here in Paris!  You can read all about it here, and get signed up as well.  It’s shaping up to be an awesome weekend. Between the DCR (and The Girl) group runs, the evening party, as well as the Santa Clause 10K the following day – should be a blast as always!

Again, all the details can be found here.