This product has been discontinued by the manufacturer. It's been replaced by the Garmin Edge Explore, you may want to check out that review instead.

Garmin releases new Edge Explore 1000 Edition: Tells your friends when you crash into a ditch 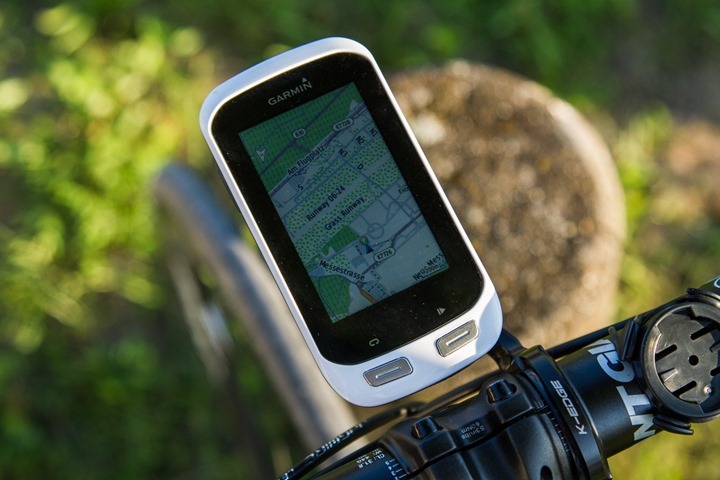 Minor Confession: A small part of me simply wanted to title this post: “Garmin Releases Yet Another Product This Summer, Because It Can”.  But alas, I hear that’s not terribly great for search engine optimization (SEO) and since I get approximately 53 SPAM messages per day to my contact form by SEO companies offering their services, I didn’t really want to give that lobby further fodder.  Instead, I give you this title – the most SEO-appropriate creative twist I could – and will further fill the post with plenty of mildly relevant content. Sound good?  Good – let’s begin.

I’ve had a chance to dig into the unit a bit while here in Germany at Eurobike – so let’s dive into it. 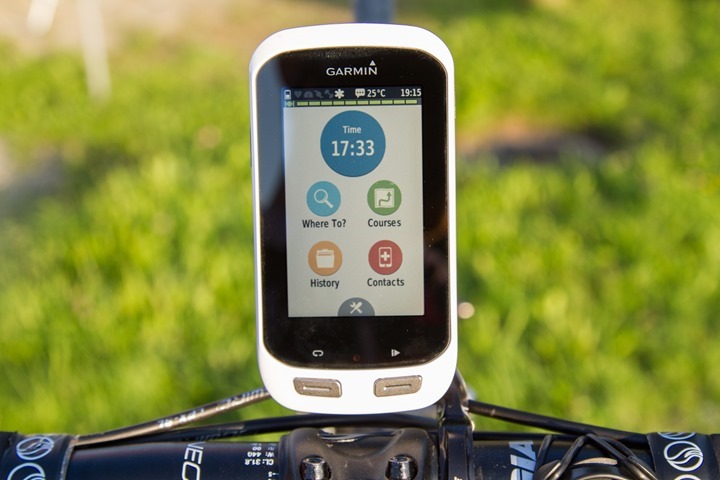 The Edge Explore is essentially a dumbed down Edge 1000.  It’s got near-identical (near being the super-important part) hardware to the Edge 1000, but lacks many of the advanced features such as structured workouts, Strava Live Segments, or ANT+ trainer control.

Here’s the quick overview of what’s new, unique, or different between the two (high level):

Based on my extensive menu/page button pushing extravaganza – those should be the only differences, but it’s possible I missed something.  It’s actually curiously interesting how slightly different the menus are between the two units.  I would have expected some of the settings menus to be precisely the same, but alas things are dragged around in slightly different spots.

Officially this is called ‘Incident Detection’, but that’s probably because lawyers had their way with it.  For the purposes of ‘keeping it real’, I’m going to call it just ‘Crash Alerts’.  Cause that’s what it’s there for.

But what exactly is Crash Alerts?  Well essentially it will alert a predefined list of contacts that you’ve kerplunked your bike.  It does this via your phone and can notify that person via e-mail or text alerts.  That person will then receive a map of your exact location.

In order for this to work you’ll need your phone with you, and need to have the Garmin Connect Mobile app installed on the phone and paired to the Edge Explore.  Additionally, said app will need to be running in the background somewhere.  This is sorta like other past cycling crash services (ICE Dot comes to mind).  You’ll then define contacts to notify within the Garmin Connect Mobile App: 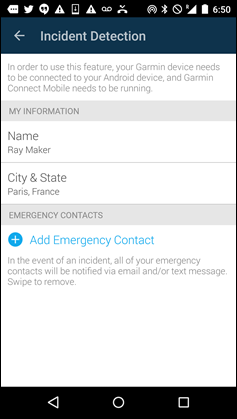 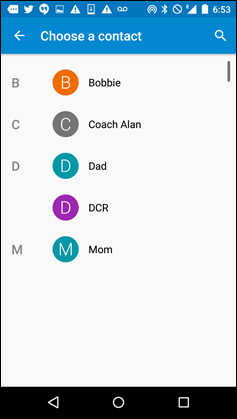 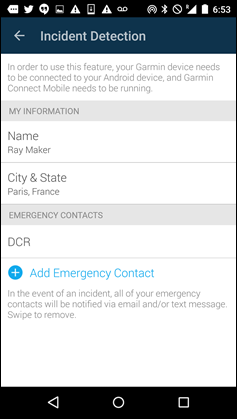 Once those contacts are setup and the phone is paired to the Edge Explore, it’s time to crash.  When you crash the function will trigger within a few seconds.  From there it’ll shriek on both your phone and the Edge Explore with an alarm.  This alarm gives you 30 seconds to disable the warning before your contacts are notified.  It counts down and all: 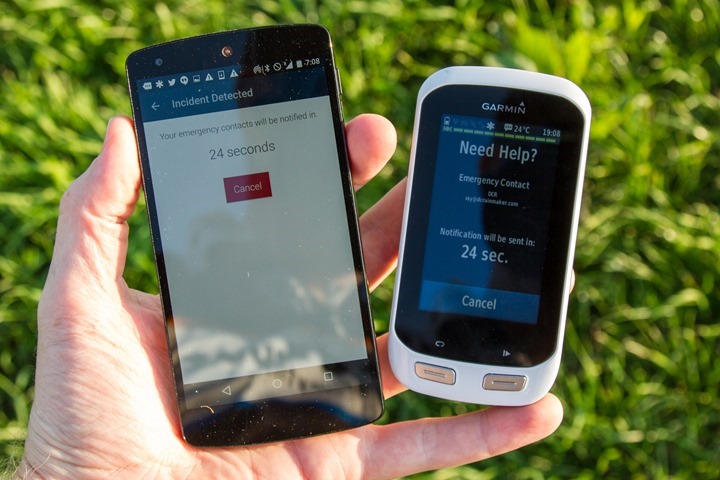 Seriously, the alarm is loud – you can hear it in the video in a second.  I believe half of Eurobike heard it too.  This won’t accidentally trigger and you not hear it.  Elderly citizens in the next country over also likely heard it.  And if you’re audibly impaired, it also turns on the LED flashlight as well as vibrates.

In the event it was just a false alarm (which also seems really tough, but I’ll get to that in a moment), the unit gives you the option to dismiss.  You actually have to press the menu twice in two different spots – just to ensure it’s not being accidentally pressed by something.  You can do this on either the phone or the Edge Explore: 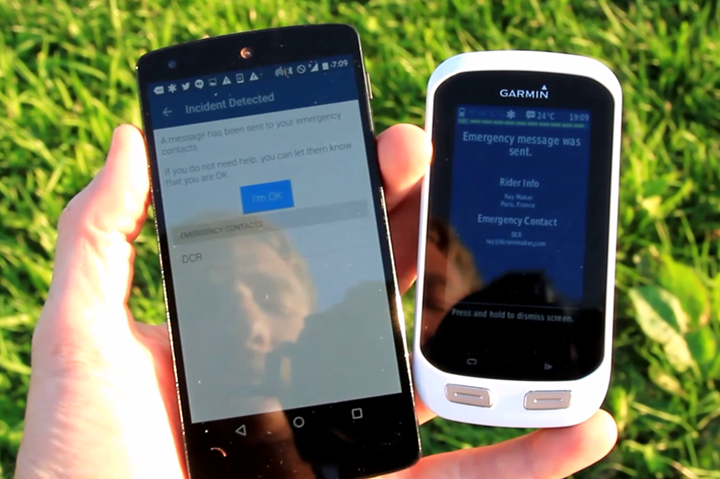 If you don’t dismiss it in time, you’re BFF’s get notified with a text/e-mail message.  From there they can click on a link and see where exactly you are, map and all.  It’s up to them to decide whether to leave you in the ravine/bush/car windshield, or to call authorities (or call you to see if you’re alright).

Now, say you crash and get up and decide you’re just fine.  You can then send an ‘I’m OK’ message as well from the unit.  It sits on the screen after the crash alarm has fully triggered, waiting for you to show signs of life. 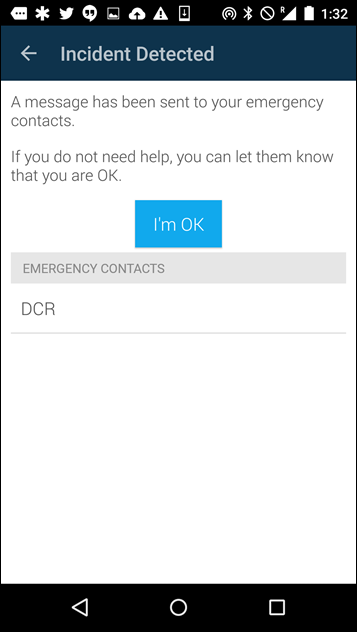 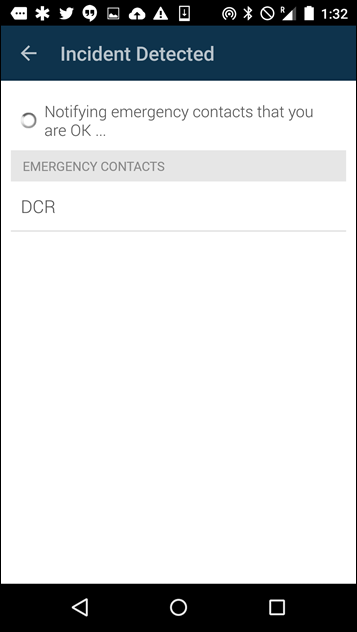 When you do that, it’ll send another notification to friends and family. Finally, note that the unit will show you the incidents in the drop-down menu too – and you can look at the locations listed there. 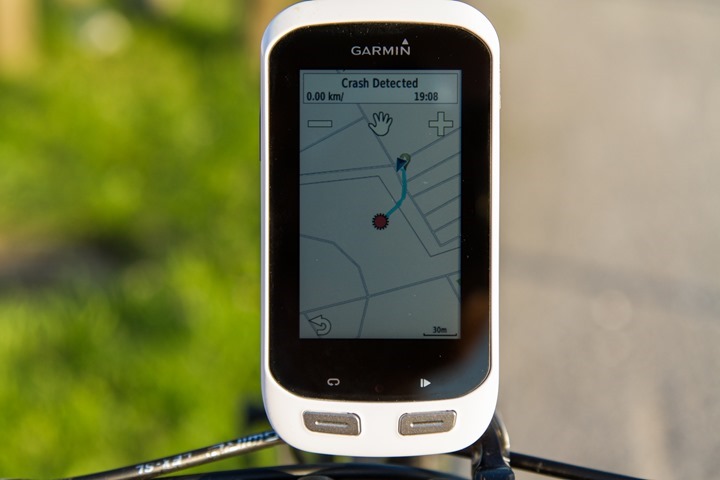 To demonstrate this whole process of triggering it, I put together this short video this afternoon:

Now, it’s actually somewhat important to note that I had a bit of trouble getting the crash detection to trigger.  When I vigorously shook the unit up and down (like waving it)– it would trigger.  But merely throwing it across the field at the grass did not.  In fact, I threw it many times – some probably exceedingly hard at the ground – and not once did it trigger that way.  But, this isn’t a final unit and also perhaps had I thrown it at concrete it would have triggered more reliably.  But having been hit by a car before while cycling, I know that one doesn’t actually always land on concrete.  Nonetheless, I’ll give them the (temporary) benefit of the doubt that it’s a prototype issue until I get a final production unit.  (Update: Garmin tells me that normally they’d take into account the speed you were at as well, so given I was standing that would impact things.  This is done to minimize issues while mountain biking or on rough roads.)

So why won’t the existing Edge 1000 get a firmware update to enable automatic crash detection?  Because the hardware physically lacks an accelerometer in it.  Said accelerometer is how the Edge Explore knows when you’ve had a bad day (just like playing a game on your phone using motion).  Interestingly though, I’ve been told that the Edge 520 does include such required accelerometer – and thus is slated to get the update down the road, though there aren’t specific timeframes for it.

Note: The Edge 500/510/810 do not have an accelerometer either, thus, no update for them either.  I also wouldn’t expect any sort of update for wrist-based devices (i.e. Forerunner/Fenix/Epix), as there’s likely too much variability with accelerometer data there as you grab things like water bottles, etc…  Further, dismissing an error on a wrist based devices while riding may well end up causing an accident. 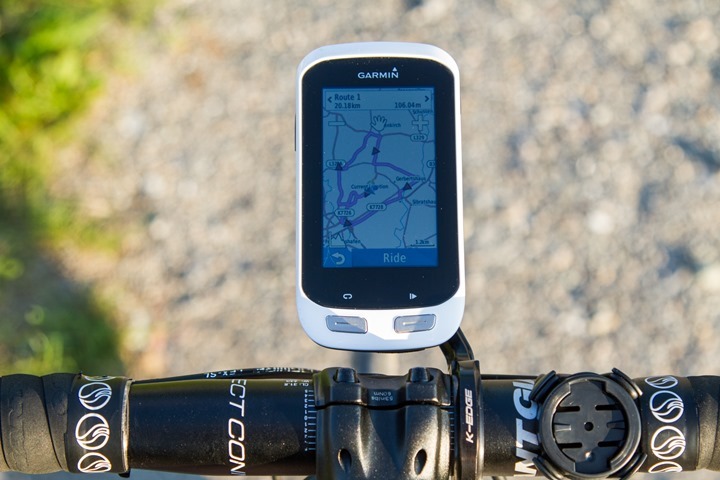 While my time with the Edge Explore has been limited, I have put a few miles into it today.  In many ways, once riding it’s basically just an Edge 1000 – and I use that all the time (along with other units).  So that piece works reasonable well today.  Obviously this unit is targeted at touring, so it’s more about a simplified route planning experience.  And that too works fairly well.  I’ve created a few routes around the Eurobike area and followed them a bit without issues.

I’m not 100% convinced that crash detection from the unit to the phone makes a ton of sense though, for the simple reason being that your limiter there is the Bluetooth Smart connection – which can have some distance challenges depending on everything from the phone model you use to your body type and what might be between you and the phone.  And that’s ignoring that I had a really hard time getting it to trigger – but I’ll assume that’ll be worked out in the final production units.

So overall – I put this in the category of ‘shrug’.  Nothing wrong with it technically, just odd pricing for it.