The Tour de France in Paris: Riding it, watching La Course, and the Finish

As is always the case, yesterday is an epic day for cycling fans in Paris.  I went for the trifecta of craziness, and tried to jam it all in.  Here’s a look at my (semi-exhausting) day.

When the Tour finishes each year in Paris, there are basically two parts to the route.  The first part is completely different each year – and starts in the suburbs of Paris and winds its way into the city.  The second part that’s much more well known commences once the riders pass the pyramid at the Louvre and then shortly thereafter begin loops on the Champs-Élysées.

In looking at the first portion, the route was actually reasonably easy to get to the start, and it wasn’t super-long – about 50KM in total.  But more importantly – it was actually a really cool and unique looking cycling route.  So I hoped on my bike around 8AM and headed out to the RER-C train station next to our house.  Regrettably, I forgot said station and every other RER-C station near me for miles is closed until the end of summer for construction.  So that cost me a (large) bit of time.

Instead I just rode in the direction of the starting line and eventually found an open train station:

After departing the train it would have been about a 10 minute ride to the starting line.  Though, somehow I took a wrong turn or twelve and it ended up being more like 25-30 minutes of additional pedaling.  No worries, eventually I found the starting line – just as they were setting it up: 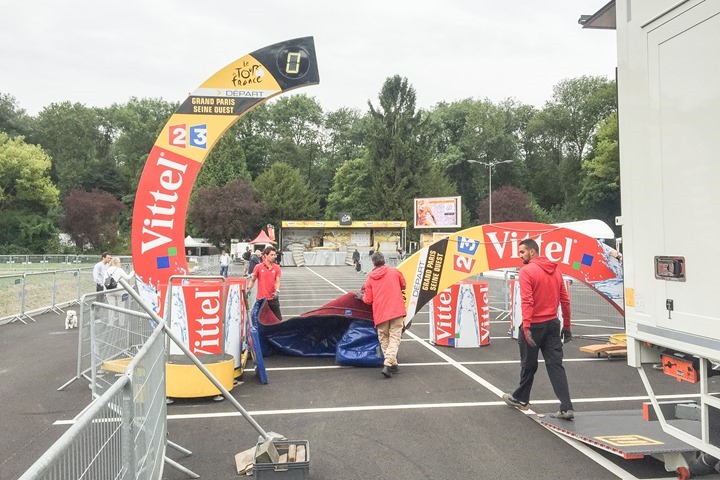 It was mostly a rather dreary morning.  Not super cold, and not really raining yet either.  Just the odd 2-second sprinkle every 10-15 minutes, but nothing like the fiasco later in the day. 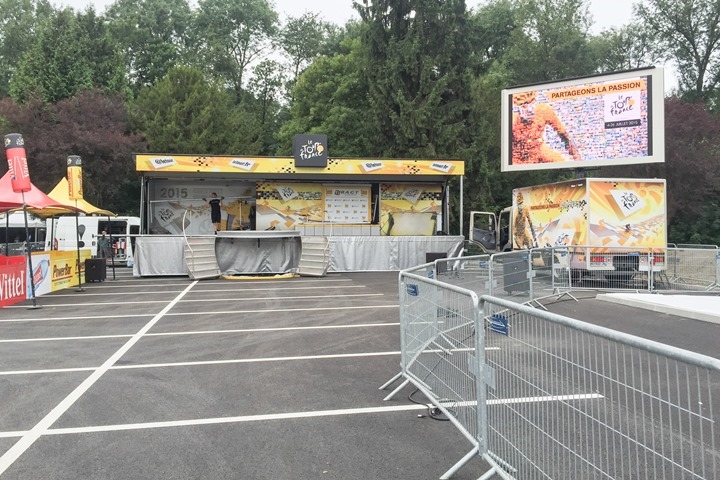 I watched for a few minutes as they set up things.  I figured it’d be more interesting to just have it all setup for my recorded course video. 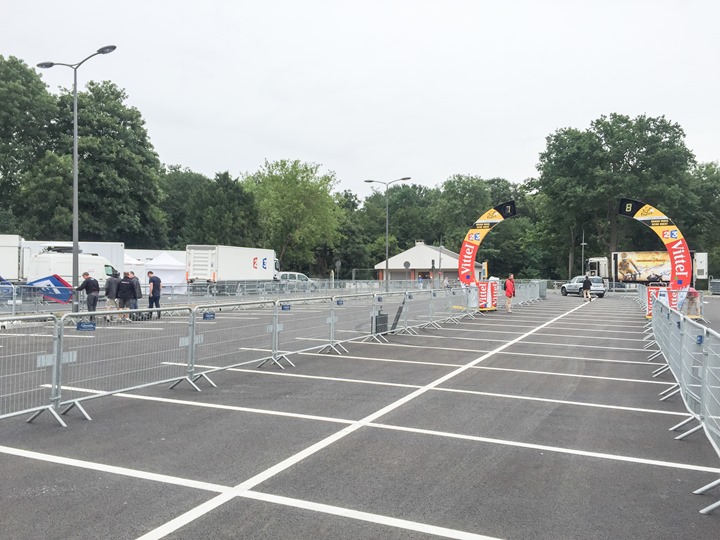 Beyond that, there was only a single team vehicle there – a lonely Team Cannondale-Garmin RV.  It’s unclear if they just decided to park there for the night, or if it had just arrived from the 7+ hour drive from Alpe d’Huez. 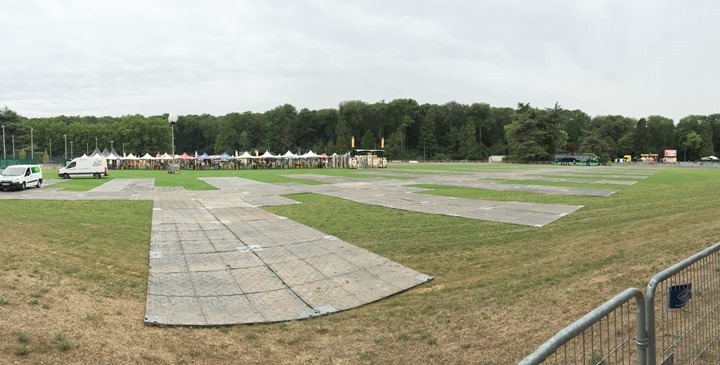 From there I headed on out.  I was somewhat surprised there weren’t more riders out there riding the course.  I sorta expected to see tons, when in reality I only saw a handful.  Mostly just a lot of workers setting up various promotional items. 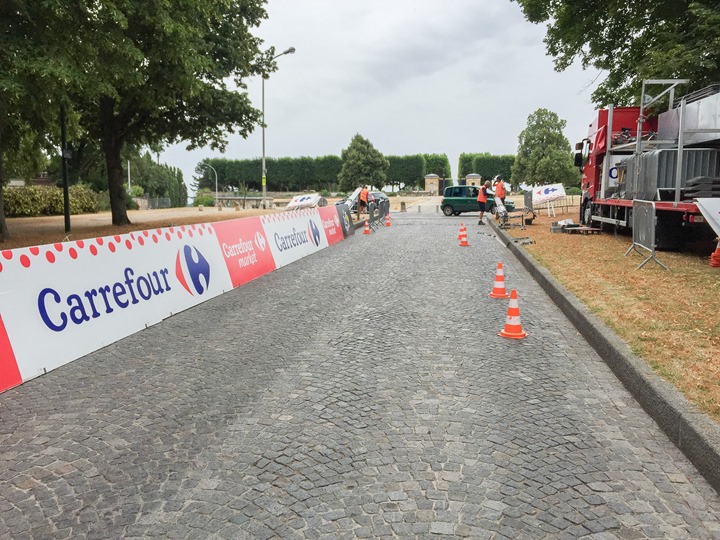 Following the route is trivial easy since they put up these neon-yellow/green arrows every few hundred meters and at every turn.  So while I had spent the time to create the entire route turn by turn on Garmin Connect to download to my Edge 1000 the night before, I didn’t end up needing that layer of guidance.

What was cool about that route though was that it was very clearly designed by a Parisian cyclist.  It’s as if the person had a goal of making a ‘best of’ hits album, with little snippets of all the coolest segments nearby.  So many times during the ride I thought to myself: “Yup, I’ve done this section before on X ride with plenty of other cyclists”.  Super cool. 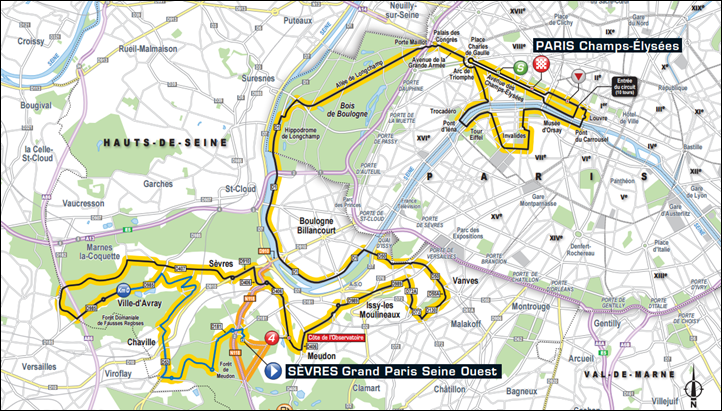 I had actually shot the whole thing on the new VIRB XE (and the Sony 4K X1000V action cam).  But both failed in their own unique ways.  To begin, the VIRB XE failed to find/pair to any ANT+ data, despite trying numerous tries searching for all sorts of sensors.  Given I’ve got more sensors than spokes, surely it could have found something.  Then, about half-way through the ride I plugged the camera into a battery pack mid-recording (since it would be a tight squeeze on battery-life).  Despite the recording light still recording/illuminated red, it actually decided to skip recording this entire section until the moment I disconnected the cable (where it magically resumed).  Of course, even with that – it also failed to correctly track distance due to this split. Super-frustrating, though at least I had mostly good luck with it last week in Croatia on the sailboat.

Meanwhile, the Sony X1000V cam lasted about 45 minutes before it died.  While I love the quality from the Sony cams (and their desktop software is pretty cool too, especially the multi-cam views that the VIRB Edit lacks) – the battery life is just horribly unreliable (I’ve got three cams).  Not to mention the display on the camera is super old-school.

Though, I suppose neither cam would have recorded the final bit of the stage.  As by time I got to around the Louvre fences had been put up for Rivoli as the La Course event was about 2-hours away from starting.  I probably should have started a bit earlier.  Oh well, live and learn – always next year, right?

Watching the Women at La Course:

After a brief interlude with the Watteam PowerBeat folks installing an almost final version of their power meter onto my bike, I headed back out to watch the women race La Course.  You’ll remember my more in-depth post on it last year.

This race was held about 1PM and follows the same looped section as the men that would race later in the day.  However for the women it was a single-day couple-hour race versus a multiple-stage race. 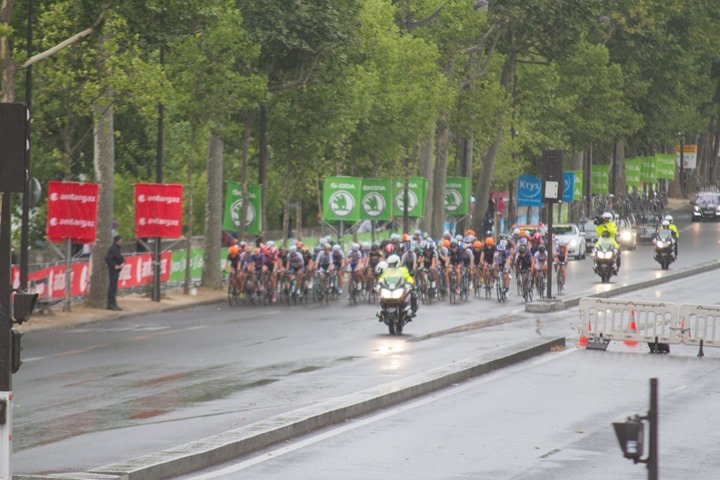 By this time the weather had turned to light rain, which on the pavé of the Champs-Élysées, was more than enough to do serious damage to the riders.  Nearly half of them didn’t finish.  Brutal.  It’s a core reason why Le Tour then changed rules for the men’s race a few hours later. 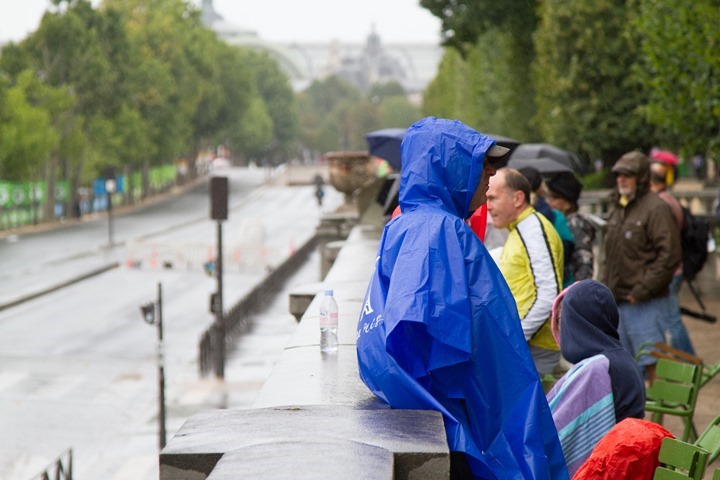 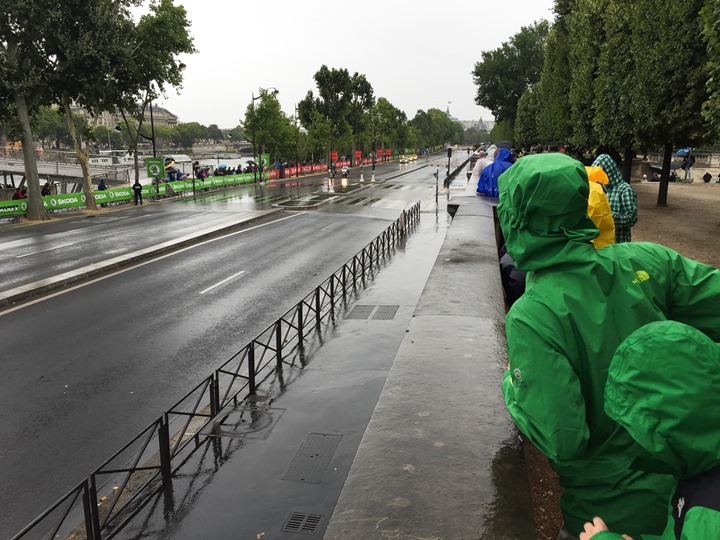 I watched with Pro Triathlete Brad Williams as the women went around and around.  Like the men later in the day, the speeds were definitely fairly cautious compared to last year.  Still, totally fun to watch.  A quick gallery:

Oh, and as I was standing there – from across the way a DCR reader shouted out to me.  Hilarious!  In retrospect, we should have crashed his party/view.  Way drier than the rest of the day. 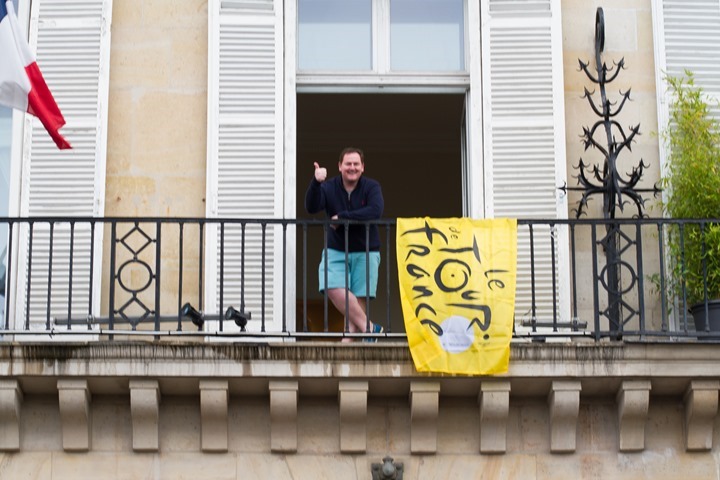 From our vantage point you couldn’t quite see the finish, which was up just beyond Concorde.  So after the final lap we headed over towards the Eiffel Tower to catch the men swing through.

The Caravan & the Men’s Finish:

After leaving the Tuileries behind, we arrived about 20 minutes later to the Eiffel Tower by foot.  With the different approach this year into Paris than past years, I knew I’d be able to get a great and unique shot of the peloton in front of the Eiffel Tower.  Normally they stay on the opposite side of the river away from it.

By time we arrived it was clear the entire day was becoming fairly delayed.  With the rain, everything was slowed down – starting with the women but that would carry through into the caravan and the men as well.

About 30-40 minutes late, the caravan buzzed into town.  By this point it was raining pretty hard, with some nasty wind to go along with it – and not exactly warm.  It was basically miserable out. 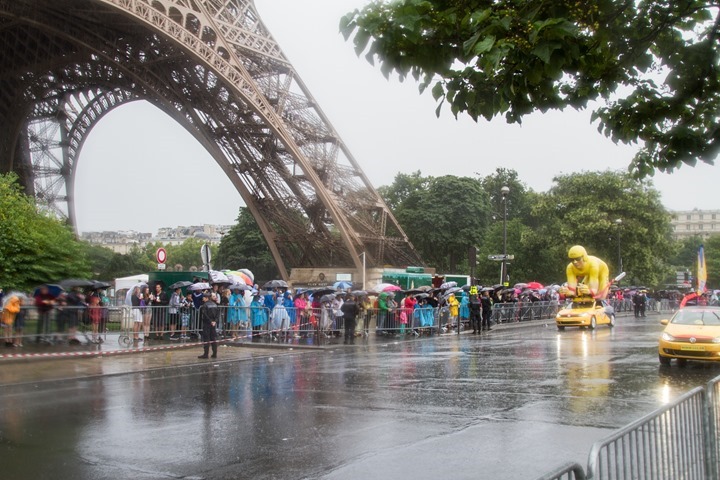 Both Brad and I could barely use our phones due to our fingers being so cold and shaking.  All my texts looked like drunk texts.  In retrospect wearing something warmer and waterproof might have been wise. 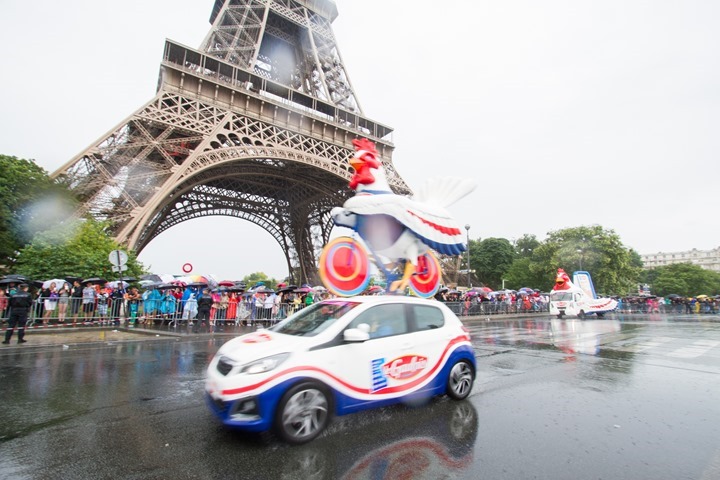 After the caravan passed, it would be another hour before the men came through – at best.  So we made our way about 20 meters over to a sausage stand to obtain warm foods.  That helped. 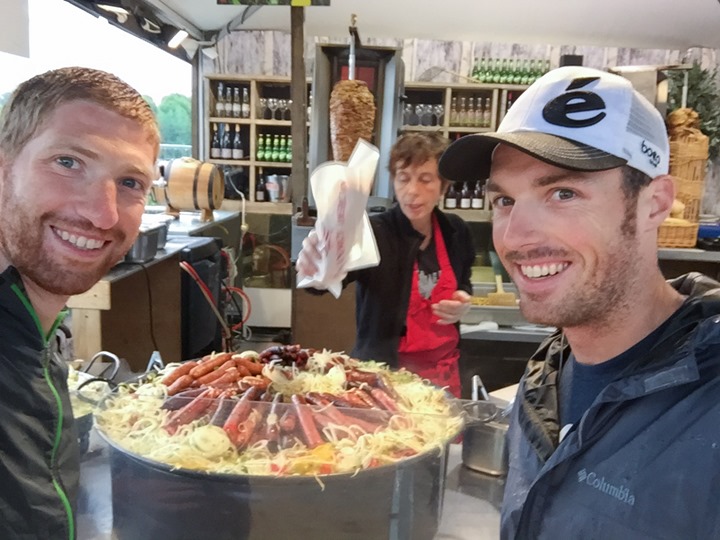 From there we went back to our spot and did a bunch more waiting.  The final stage route did not lend itself to fast speeds, given the windy turns on wet roads – so the riders were a bit slower than anticipated.

Eventually though, they crossed the bridge over the Seine.  You can see Team Sky as they visibly slowed down to take in the moment. 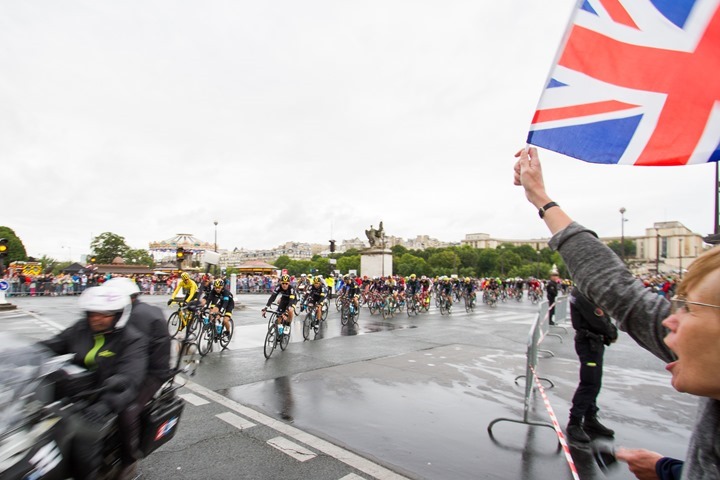 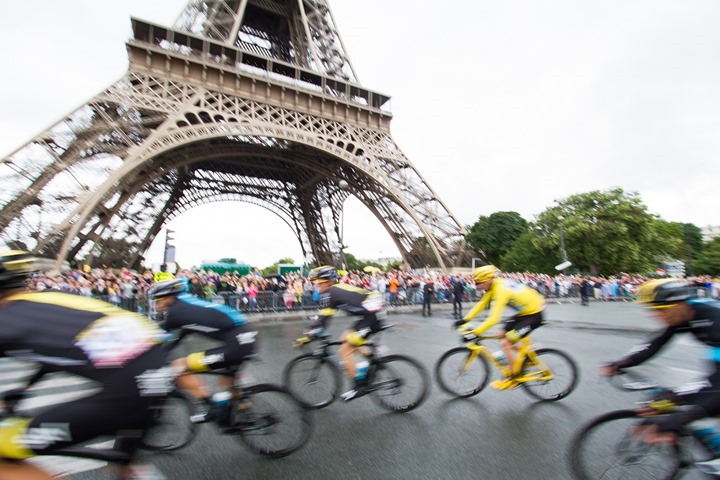 Then the rest of the peloton swooshed around the corner. 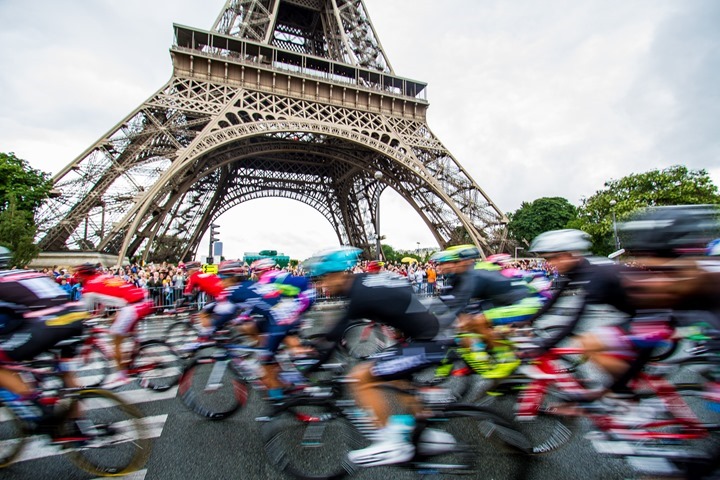 Within 20 seconds, they were pretty much gone minus a few stragglers. 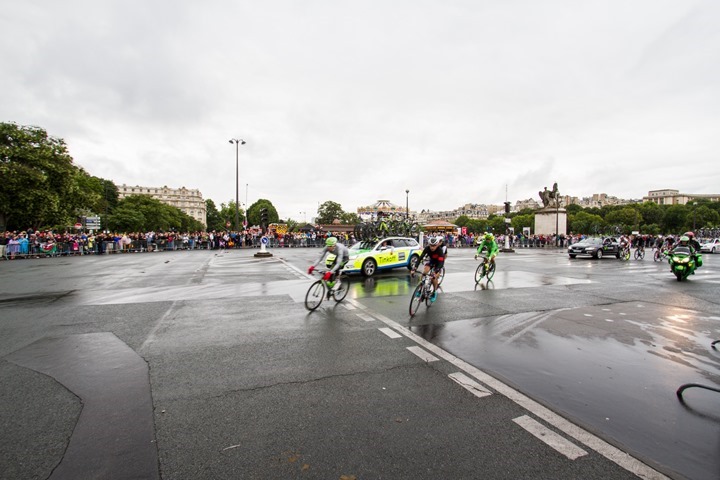 From there Brad and I ran back to the gardens a mile or so across town.  We actually made surprisingly good time, beating the riders before they even finished their first loop.  Even had time to take a photo of people’s ‘camps’: 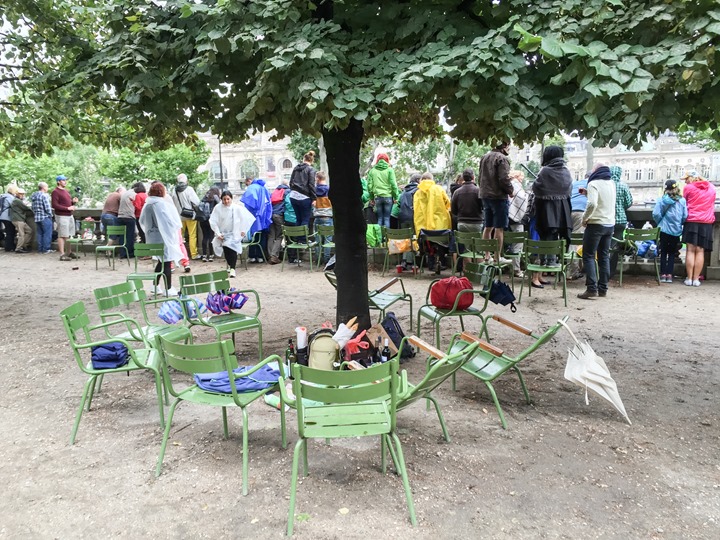 Then the riders came through – with a lead-out from Team Sky: 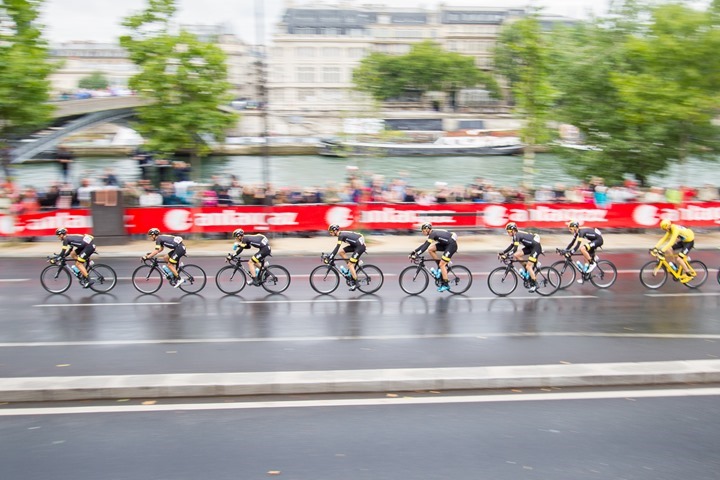 At which point we commenced watching them from various points within the gardens – still the best place to see the riders.  Here’s a small gallery:

Oh – and of course – The Girl met me there too – with dry clothes! 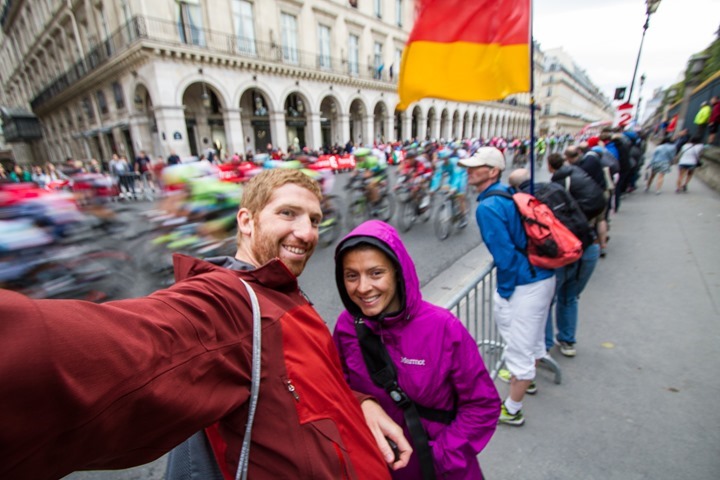 Finally, I thought it’d be interesting based on yesterday’s post to collect some power meter data from riders.  And by some, I mean all of it.  For both the women and the men I used the WASP as they came around each loop to grab short snippets of ANT+ data floating in the air. 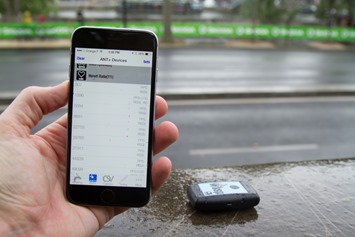 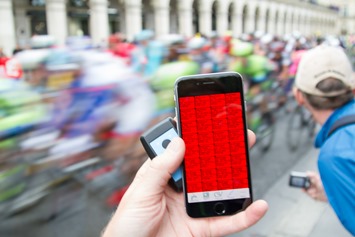 Within the women, that would be 55 power meters.  And for the men, I got 102 power meters.  For both fields, that’d be about 60% of the total riders.  Though since more women DNF’d, I think the numbers were probably higher there that I didn’t catch in the first half or so.  Additionally, for the men, the speeds were higher and with standing on the side you only get a second or two.

Interestingly, more women used HR straps than men, coming in at 55 vs 44 for the men.  Though, I could see how the men’s numbers would likely be artificially lower for the final stage because some might not bother to wear it on such an easy stage/day (versus the women, who would have been out there to actually race).

Sometimes with only getting data for a brief second you get odd numbers popping on the screen.  Though, most of the time I got enough information about each power meter to identify the brand and model (including one that I haven’t seen before…). 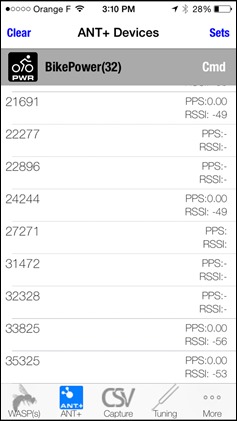 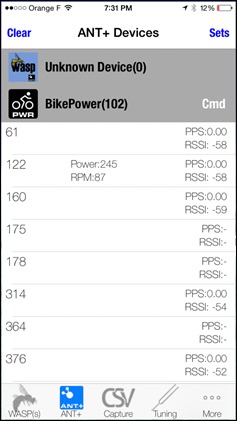 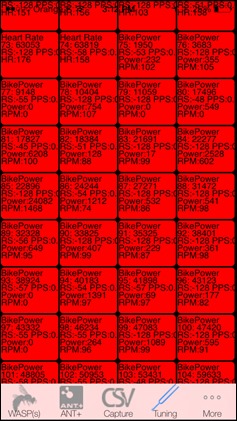 As for identifying specific power meter data to people, that was actually easier than I expected.  Riders would often fall behind or break away briefly, in which case I could easily pick-out a given rider’s ANT+ ID’s and then name them as such. 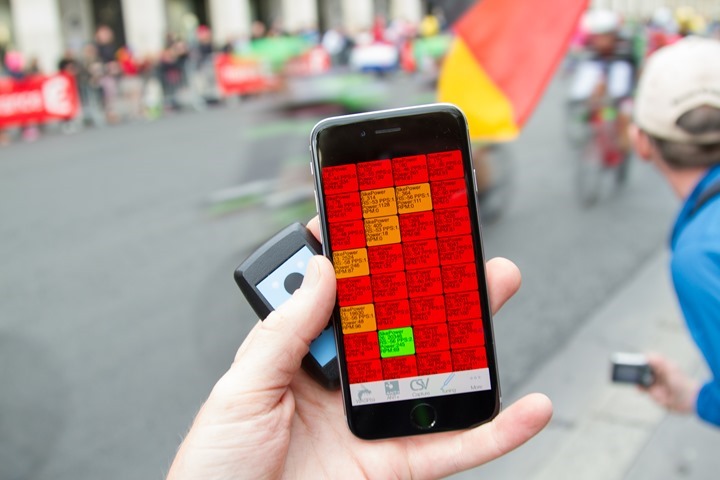 I’ll stick all the data up somewhere at some point this week (probably within a post later in the week with some leftover TdF photos/stages I’ve got), for folks that want to see what the data looks like.  It’s obviously only brief snippets – a couple seconds at best – given the speed they were travelling by.  But might make for some fun graphs – especially some of the lead-out sprints down Rivoli.

(Note: If you’ve landed on this page at some point in the future and are looking for tips on spectating the Tour de France, start with my spectatorwhich guide.  And don’t forget to check out the comments on that post for recommendations from others as well.)