Earlier this year a significant announcement was made that there would be a women’s race at the Tour de France.  It wouldn’t be the entirety of the Grand Tour, nor even a multiday event – but – it would be a start.  And for this year anyway, it would be a single day on the same stage.

The race was set to start at 12:45PM local time in Paris.  Unlike the men’s stage that’d be starting a bit later, the women’s stage would take place entirely on the circuit within Paris.  Whereas the men started hours away and rode their way to the city before beginning the famous 7KM loop within the city.

Thus instead of warming up in some town far away they warmed up right in the city. 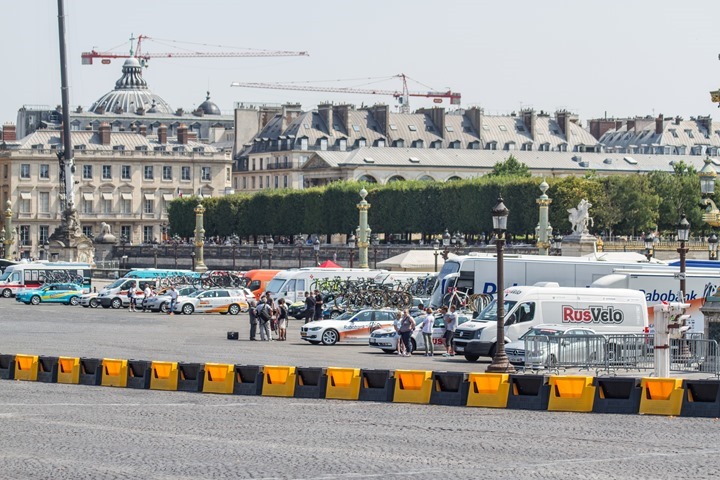 Unfortunately, unlike virtually all stages in the men’s race which are easily accessible (within just a few feet of fans) – the women’s warm-up area was about as far as you can get from fans.  Yes, that’s it – over there in the middle of spare space in Concorde.

After a lot of walking later, and with a 300mm lens, I was able to get these shots of the warm-up area.  Do keep in mind how close you can normally get with these posts. 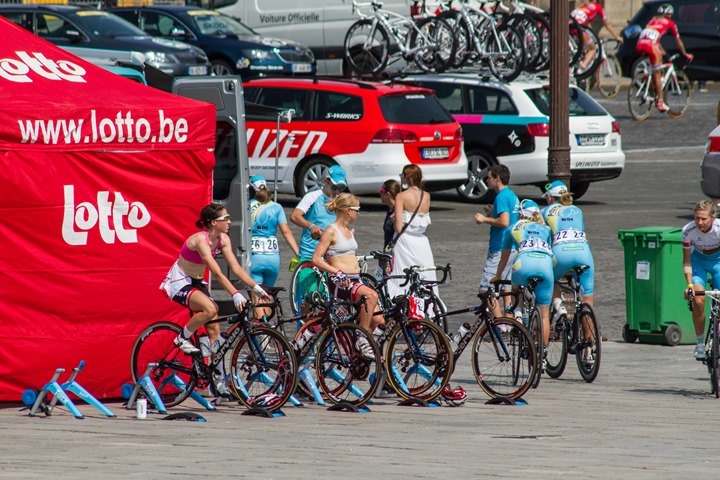 Of course, the women don’t quite have as nice of digs as their male counterparts.  The team arrangements ranged from rented trucks… 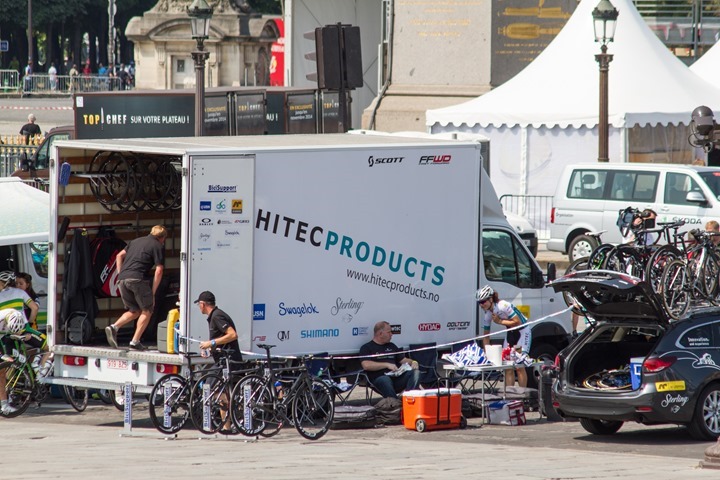 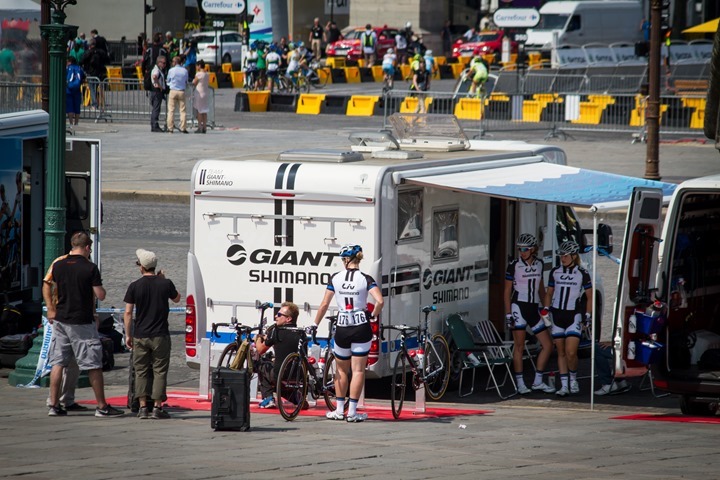 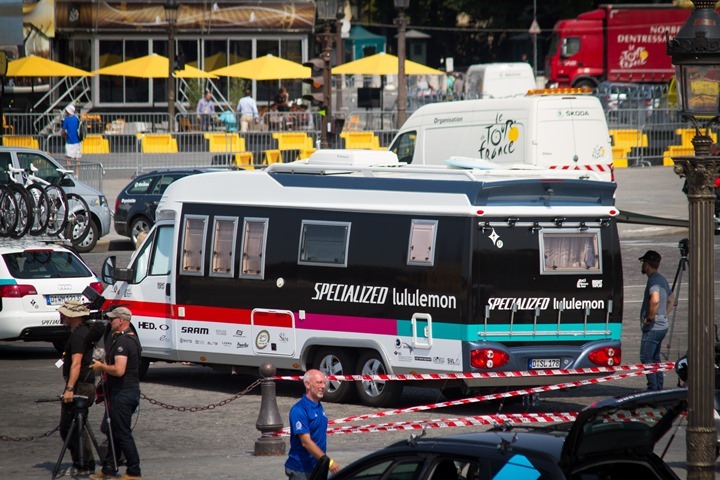 Interestingly, Team Specialized Lululemon just put themselves up on Indiegogo (like Kickstarter) in order to raise funding.  The funding period just opened up on Friday.

The team however that clearly had the most funding was team United Healthcare.  They have a full-on bus on par with the men’s team, and even the red caution tape to boot!  As an aside, almost al of the trainers I saw on the women’s teams were Tacx units – appearing to be Bushido’s of some variant (too far away to tell exactly). 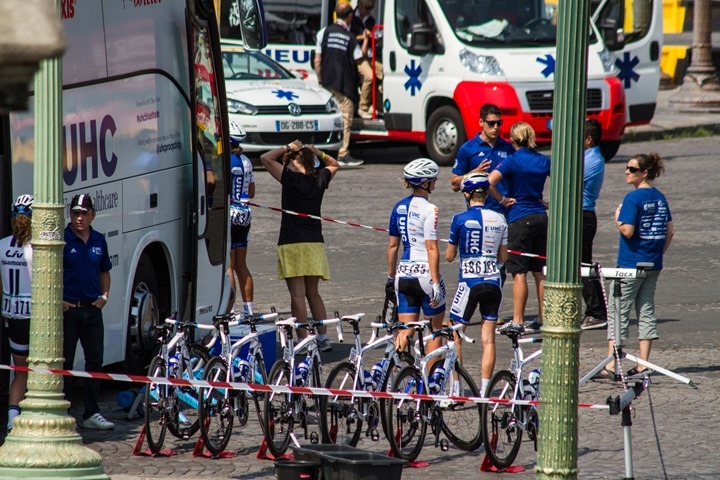 Some of the women also warmed up on the course itself, and occasionally stopped by to talk to friends and fans. 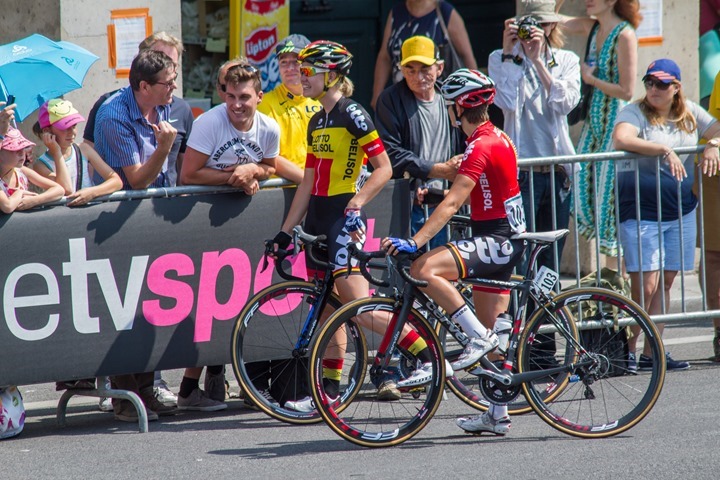 With 12:45PM start time approaching the lead-out police motorcycles and neutral vehicle headed out ahead of the racers.  Unlike the men’s race there was no caravan (parade) ahead of the riders. 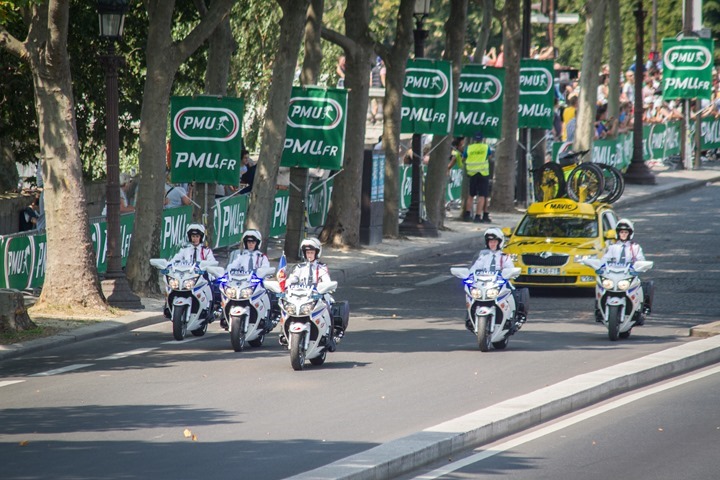 Interestingly, all of the police motorcycles were driven by women – nice touch! 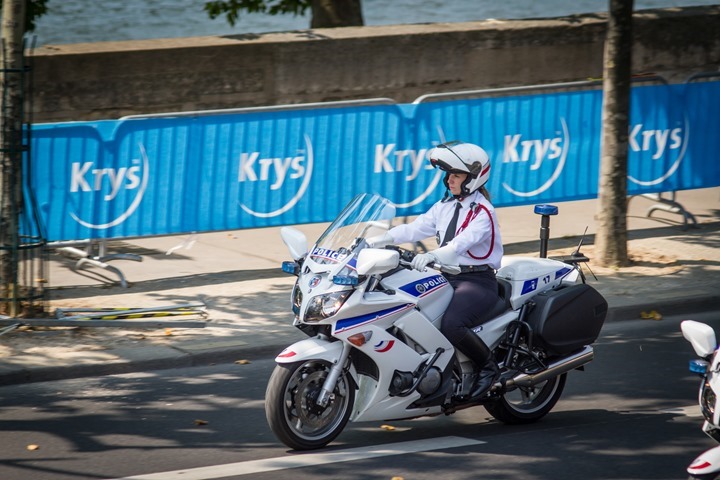 Trailing about 30 seconds behind them was the lead race official car and then all the riders.  The first lap was done at quite a bit slower pace than all the remaining laps. 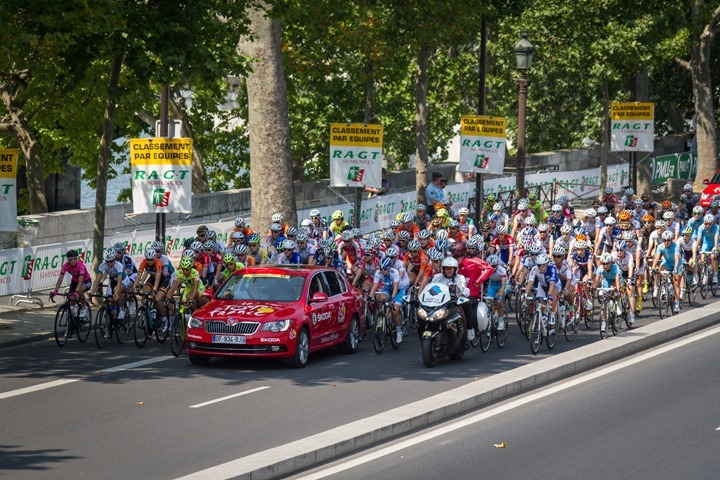 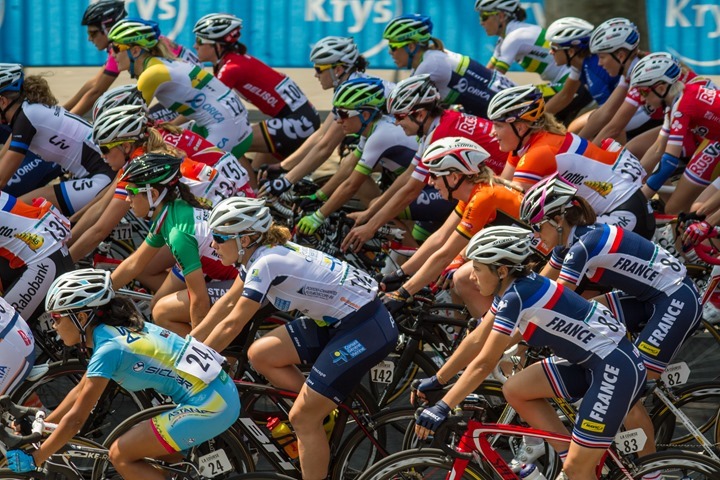 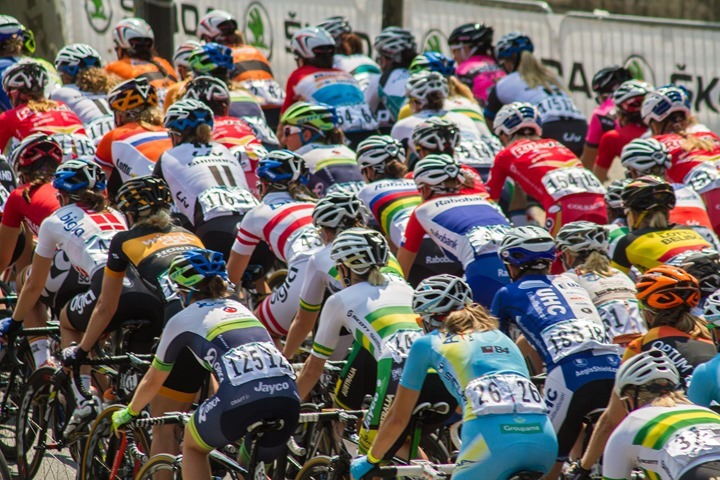 After they passed by I worked my way down the river a bit, while still staying in the park.  People were already out enjoying the day spectating from the balcony overlooking the course.  I suspect this couple was in it for the long haul, having dragged the chairs up there and broken out the expensive bubbly. 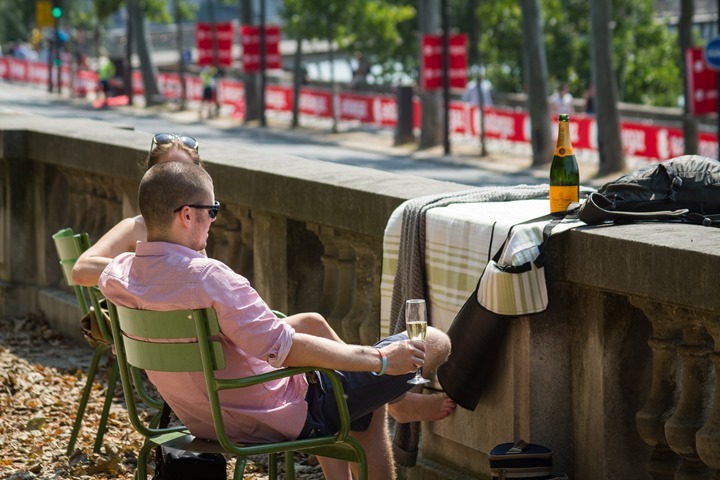 Soon the women came by again.  You can see the speed has picked up as the pack has elongated over several hundred meters (including beyond the frame). 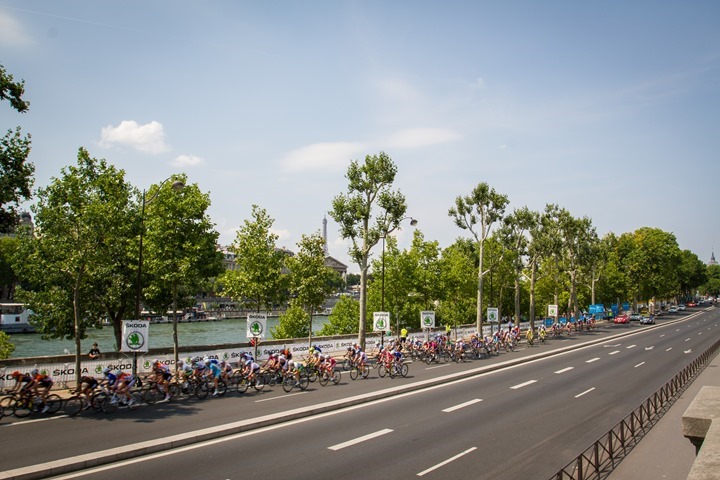 I then zipped across the park, in time to find a spot and catch them some 1.5 laps later.  Just like the men, the ladies had a police escort ahead of them at all times (even on the closed course). 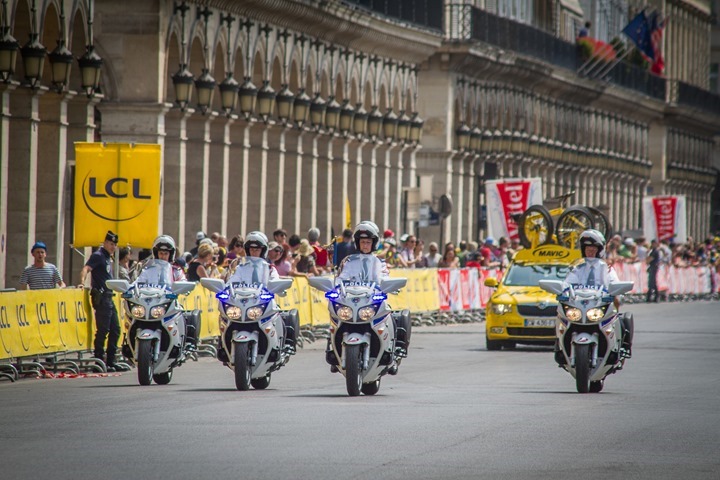 It’s here that the 1KM banner is stationed.  This is 1KM (1,000 meters) to the finish line, though, beyond that is also a sprint line which was/is used to award points for sprinters. 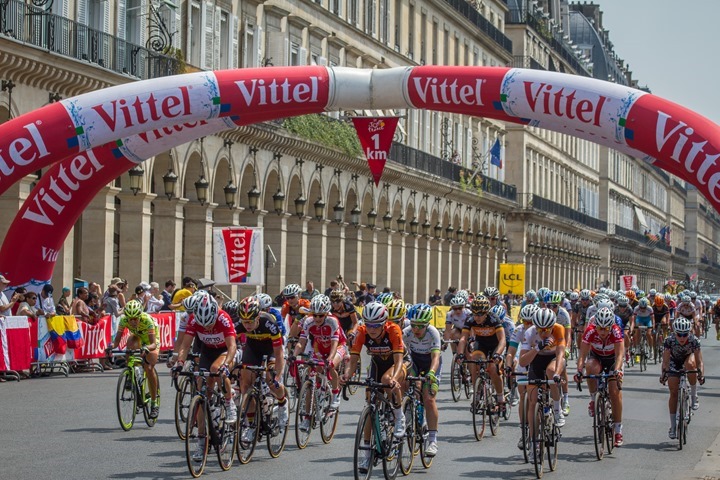 It was while this was going down that one of the team cars got pulled into action – swapping out a wheel for one of the United Healthcare riders. 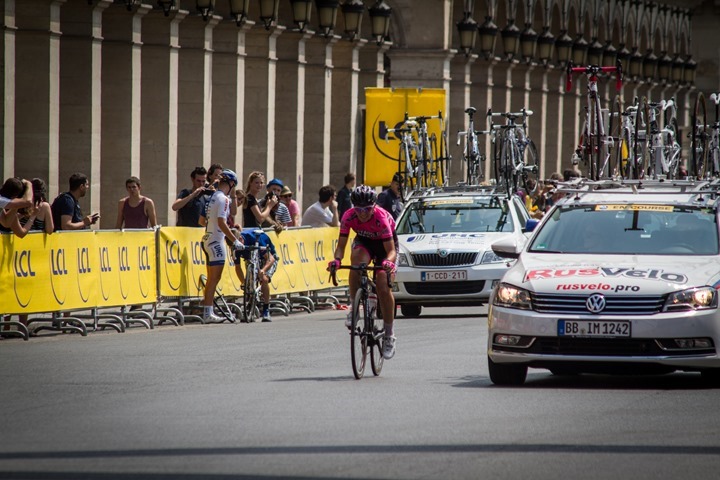 As is usually the case – he swapped the wheel quickly and gave her a push before jumping back in the car. 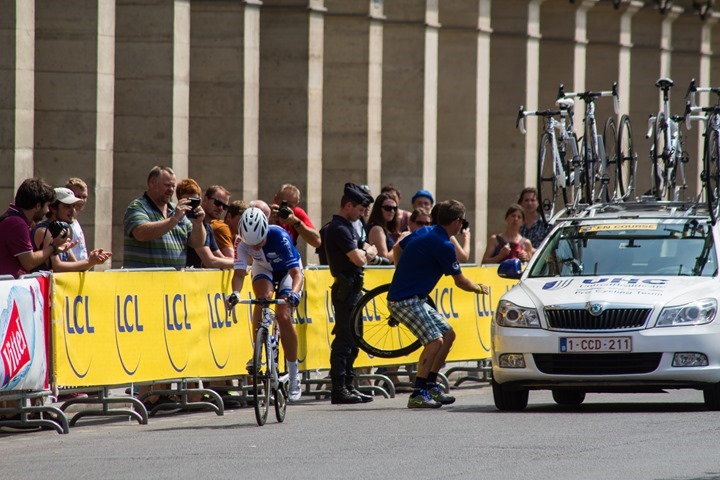 The race was set to take about 2 hours, with each of the twelve 6.5KM laps taking about 8 minutes.  So my goal was to move to a different position each time.  But of course, I got distracted in the Norwegian corner.  After all, they had kegs and BBQ’s going already. 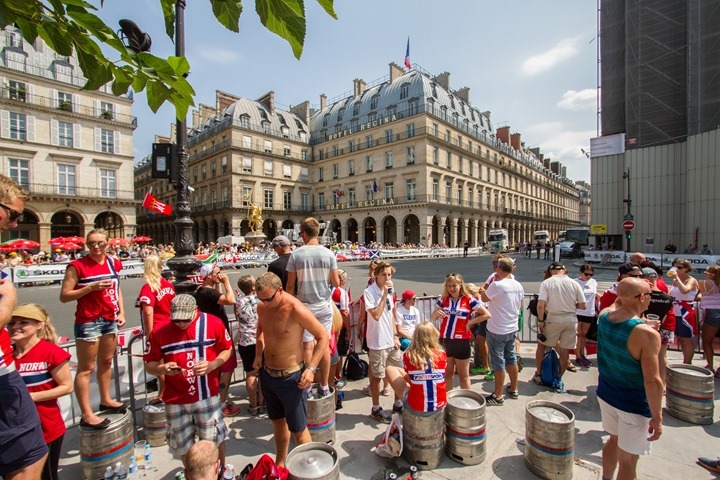 Adding to that was that there’s a lot of walking involved – especially in completing something as simple as getting from this side of the street to the opposite, which added about 2/3rds of a mile of walking – though, I managed to do it in between the two passes. 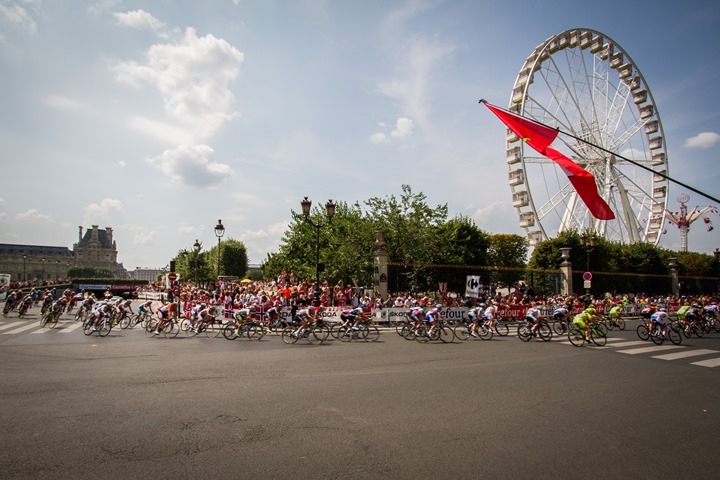 Next I worked my way down the outside of Rivoli street, past the 1KM banner again. 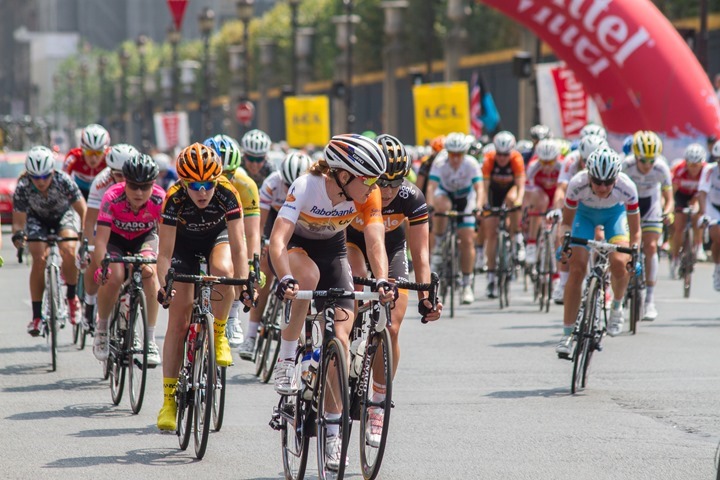 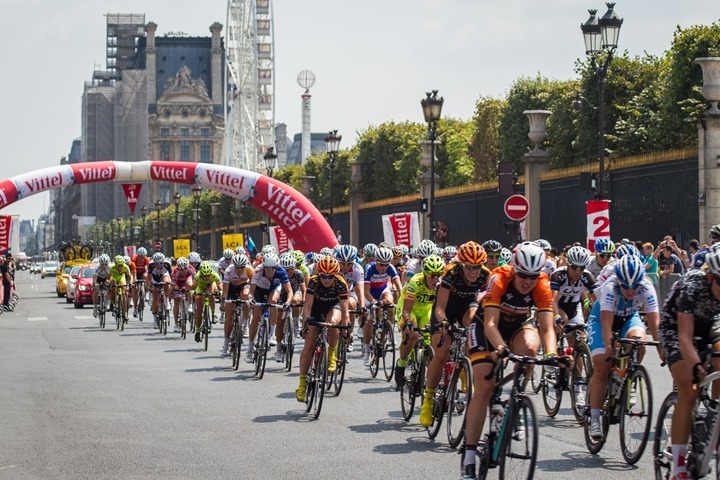 Which, is a great place to illustrate just how many team cars there are with spare bikes and wheels.  It was about equal to the men’s race actually.  See, while the men’s race has far more cars overall, once they hit the circuit they reduce the number significantly so there isn’t a multi-mile tail behind the riders. 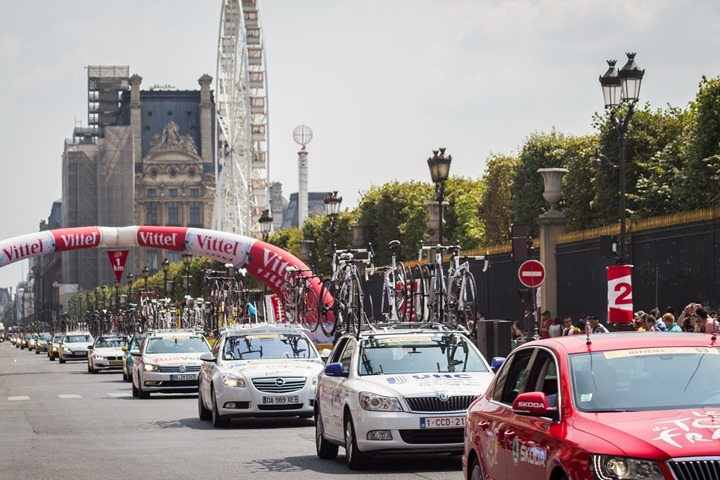 After speeding down the smooth pavement of Rivoli – likely the place where the fastest speeds are achieved – they then zig-zag across the massive intersection at Concorde. 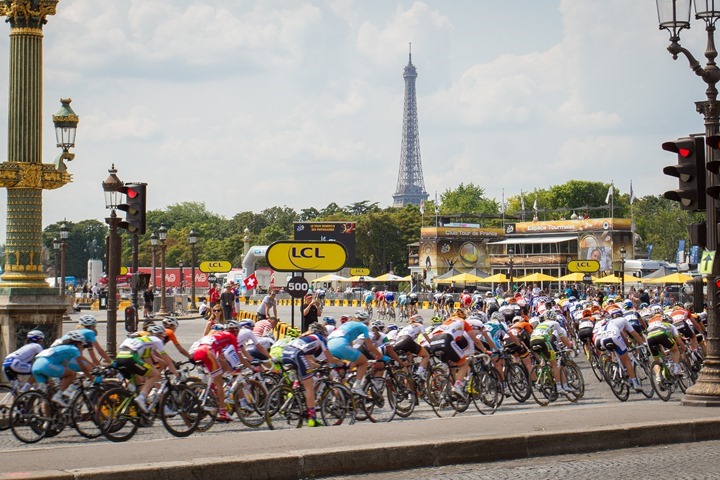 It’s just after making the turn onto the famous cobblestones of the Champs-Élysées that they’d many laps later find that finish line.  You can see it off to the left in the below photo where the yellow grandstands are. 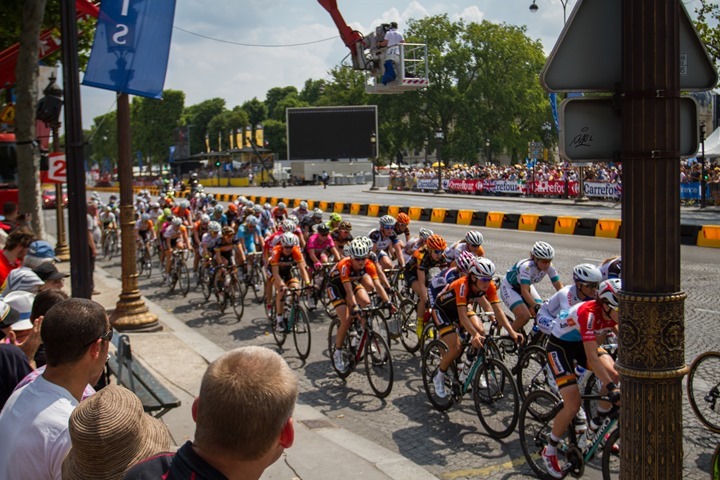 They had numerous TV’s setup along the course, with almost all of them tuned to the race (albeit in this photo the speed of the camera shutter snapped nothing).

Interestingly however, in the VIP arrival plaza at Concorde, they did not have the women’s race on.  I wasn’t in said plaza, but could see the TV’s from across the Place de la Concorde.  Though, said VIP arrival plaza was largely empty.  As were many of the stands in the VIP area.  Which in some ways served to underscore the subtle ways that the TdF didn’t quite treat the race on the same level.  Surely plenty of people would have been excited to have such incredible seats.  And surely it would have been easy to allow close-in fan-access to the riders during warm-up.  After all, it’s those types of things that drive memories in young girls thinking about racing.  And ultimately – isn’t that the real long-term goal of this event?

Similarly – while there were official stores for TdF merchandise approximately every 100-meters around the course, there was not a single place to buy a single La Course branded item.  Not even the official La Course website appears to list such items (the ‘shop’ link simply goes to the generic TdF store).  I was specifically looking for the rather cool La Course poster seen in many adverts and web images.  But no luck.  And trust me – I walked the entire perimeter of the course accessible to the public…interior and exterior fences. 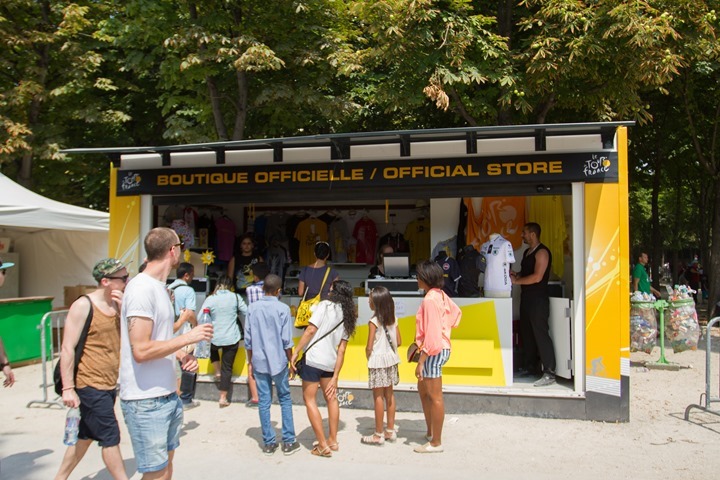 In any case, back to the race.

I continued working my way up the Champs-Élysées.  It’s here that the cobbles really set in, as it’s all uphill to the Arch.  This is particularly devastating though if you fell off the back of the group, as you were essentially suffering not only in the heat solo, but on the cobbles solo. 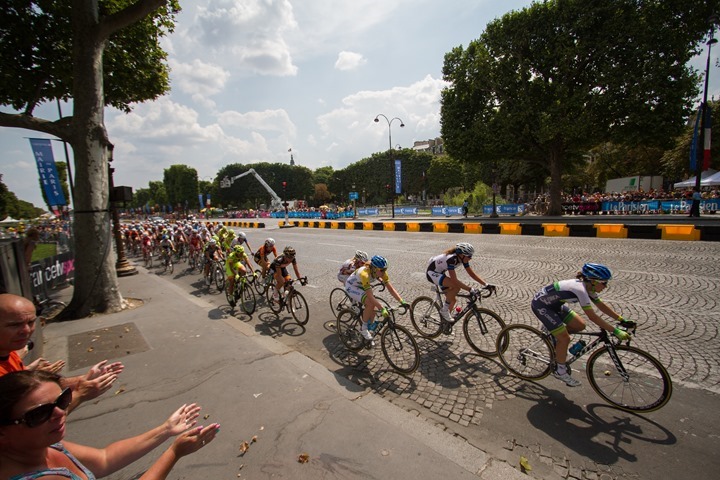 Coming back down however, the riders scream down the cobbles – though I’d still be curious to see where the fastest speeds are typically achieved on the course.  I suspect the cobbles slows things down compared to the smooth pavement found on the flats.  At least, it does for me when I’m riding it every week. 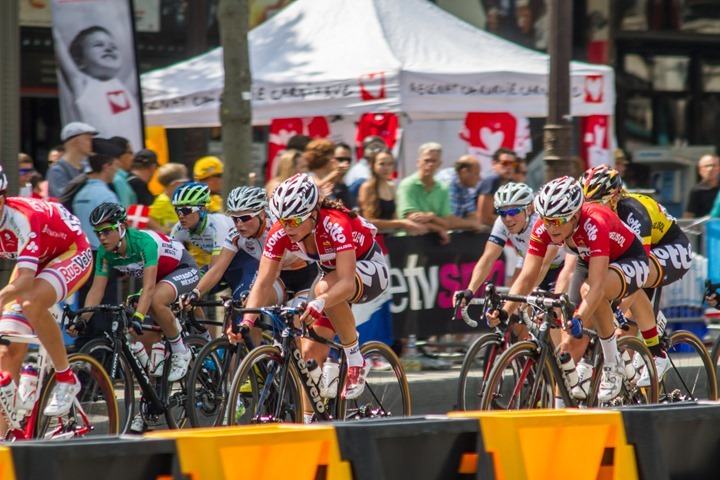 I finally found myself at the highest point of the loop at the Arc de Triomphe de l’Étoile (the Arch).  It’s here the riders make a sweeping and famous loop around the grand monument that sits at the intersection of 12 grand avenues (and one hilariously awesome traffic mess every other day of the year). 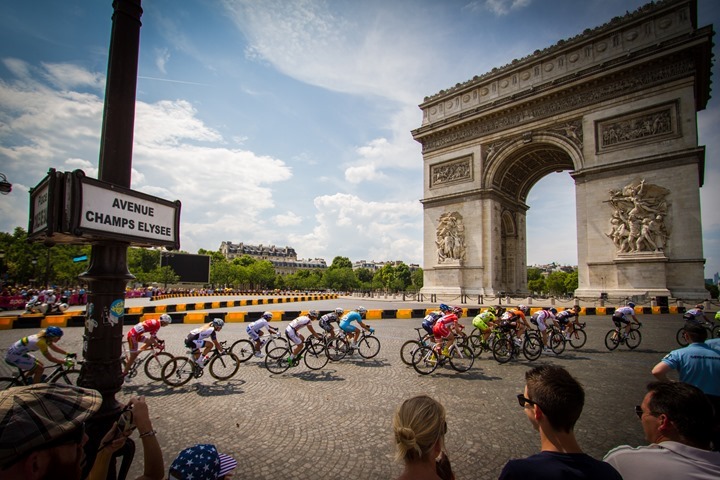 Today however, it was just for the riders.  In most cases they’d only go 2-3 wide around the massive circle, but the speeds they carry and the length of the peloton as it snakes through there was impressive. 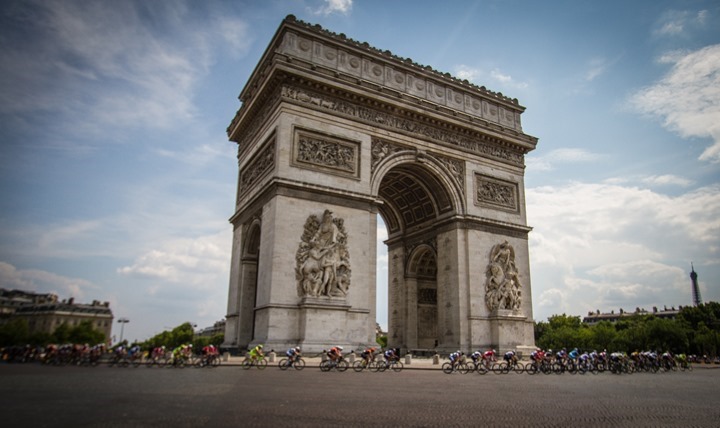 And it’s on the above photo that represented the last loop of the women’s race.  Just a few minutes later they’d be celebrating on the same finish line as the men would be some 4 hours later.  And, they’d be doing so in front of the same crowds that would be waiting and watching for the rest of the day as well, hanging out in the unrelenting sun to see cycling from both genders finish on what is unquestionably the greatest cycling stage in the world.

Hopefully next year we’ll see just a few more stages as part of La Course – I know I’d look forward to it!