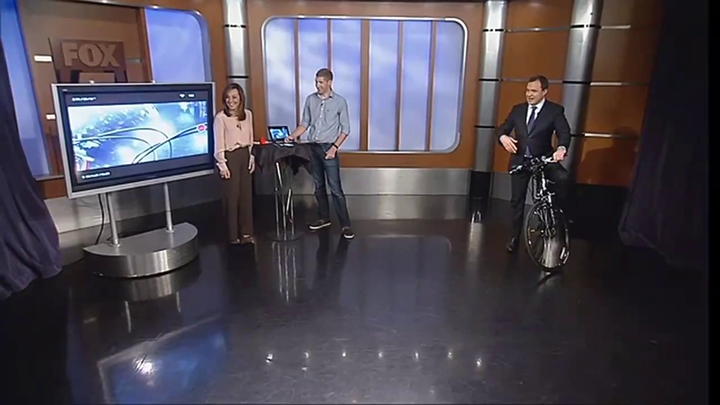 On Friday I had the opportunity to return to the FOX TV New York City studios to do a live segment as part of FOX NY’s morning broadcast.  I’ve made a few appearances on the station previously, including one about a year ago, and then again during CES in January to highlight some new gadgets that had just been announced.

This time, I was offering a glimpse at a mash-up of devices for sport and fitness that had largely come out over the past few months.  I settled on five devices, including three watches and two different cameras.

Rather than re-write the entire televised segment –  I’ll let the segment do the talking!  Here it is, in its entirety:

So now that you watched that, I figure it might be fun to note a few little things.

First up, the picture-in-picture video you see during the Cycliq Fly6 portion of the segment was actually by me, shot in Paris.  We had wanted to do it live in the studio, but since the Fly6 doesn’t transmit the video feed live, that was somewhat off the table.  Nonetheless, I figured I’d be fun to actually grab the recorded segment during the taping, for afterwards.  Here’s what that looked like.  I’ve spliced the two pieces while the bike is moving into one video:

Next, as you saw one of the anchors – Greg – actually does an impressive job of popping the wheel on the bike to make it up the steps.  Now most of the readers here probably wouldn’t find themselves normally on that type of bike.  But, it was what I found had been procured by a Central Park bike rental company when I arrived in the morning.  So, keep in mind it wasn’t super light-weight, thus getting that popped up ad-hoc and not tumbling down into the massive cameras was impressive.

For fun, here’s the video form the GoPro camera.  I didn’t quite tighten the gorilla mount enough, so it moved a little, but actually kinda worked out.  I also had only brought a regular fully enclosed case, so it blocks much of the noise out (so you might need to turn up the volume a bit).

For those wondering about the live streaming piece.  For that we just used the GoPro app tethered to the Hero4 Silver via WiFi.  Then plugged in the iPad to the TV via a simple HDMI connector.  The only downside with that setup is that the GoPro live streaming is pretty low resolution compared to what it actually records.  Hopefully the upcoming full-HD streaming solution that’s being tested by GoPro will take care of that. 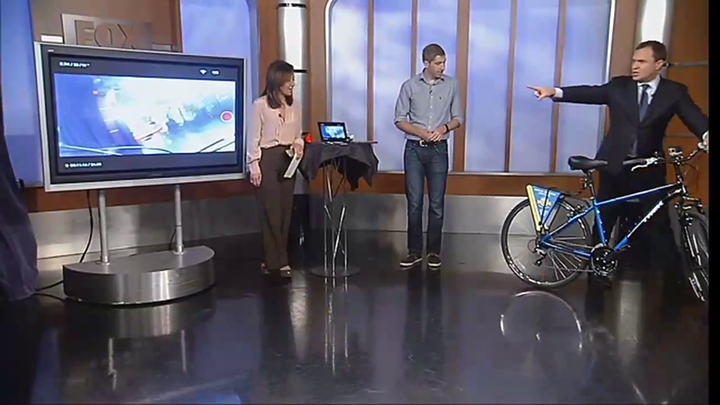 Here’s a quick shot afterwards with the anchors and station manager Lew Leone, who is gracious enough to keep inviting me back to show off gadgets.  Photo from host Rosanna’s Twitter feed. 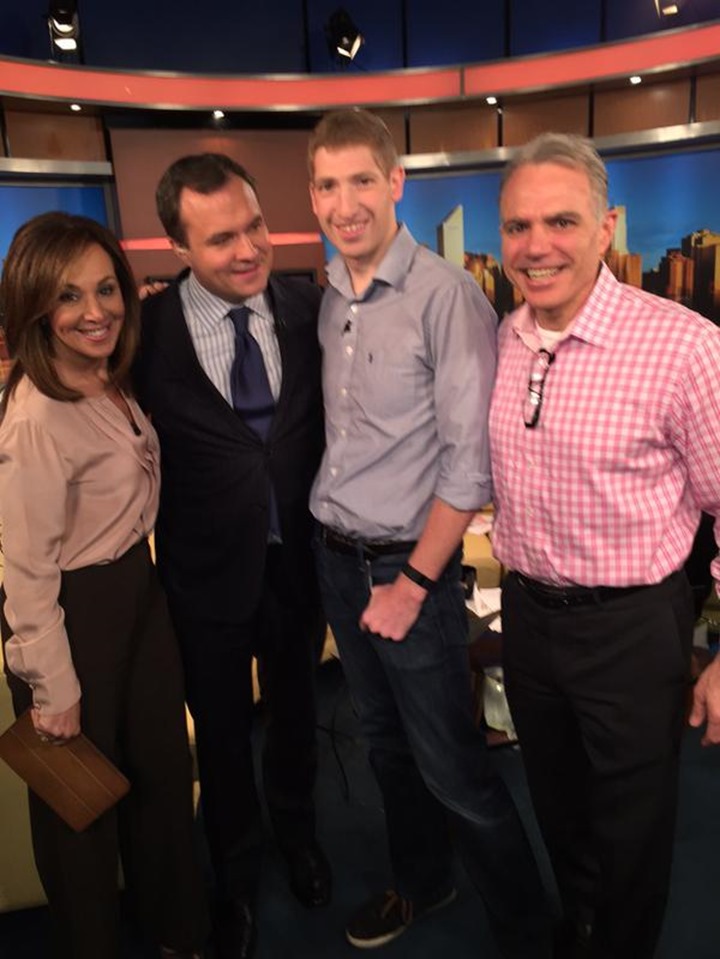 And, speaking of behind the scenes tidbits – here’s what was written on the cue cards that the anchors had.  There was some minor tweaks we made at the last moment that weren’t on this specific printed one but were on the teleprompters.  But essentially I work with their producers to put together these quick snippets together for them, and then everything else is just adlib. 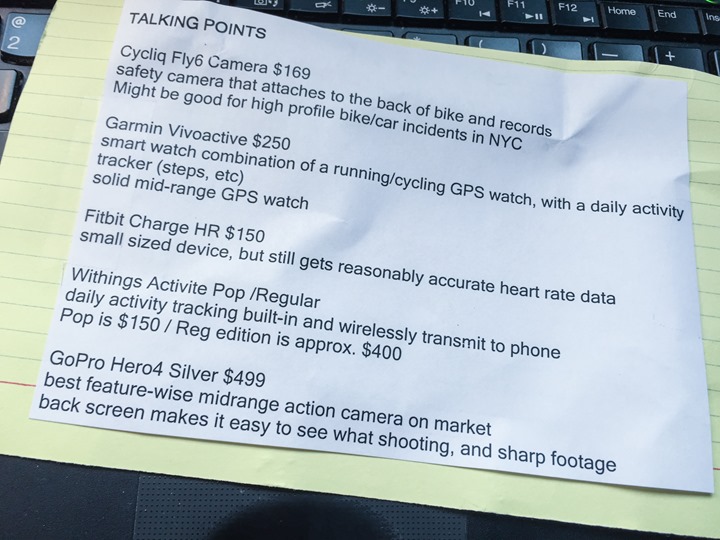 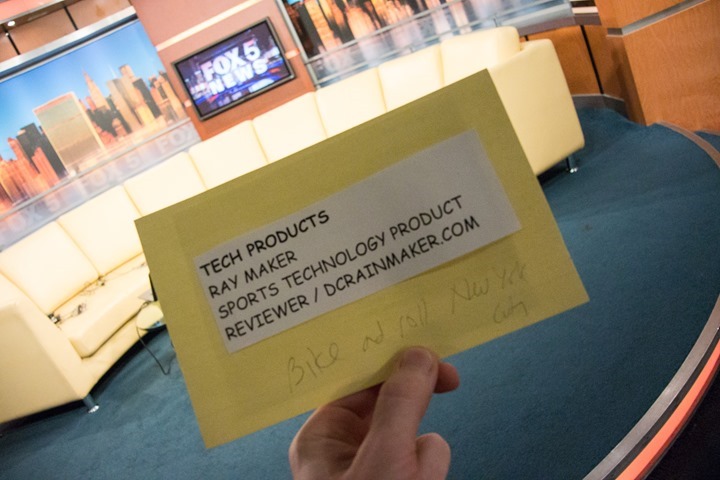 From there, I headed out into the rain – past the row of satellite remote TV trucks back to my hotel.  Despite a bit of sprinkling, it was a nice 20-30 block walk back. 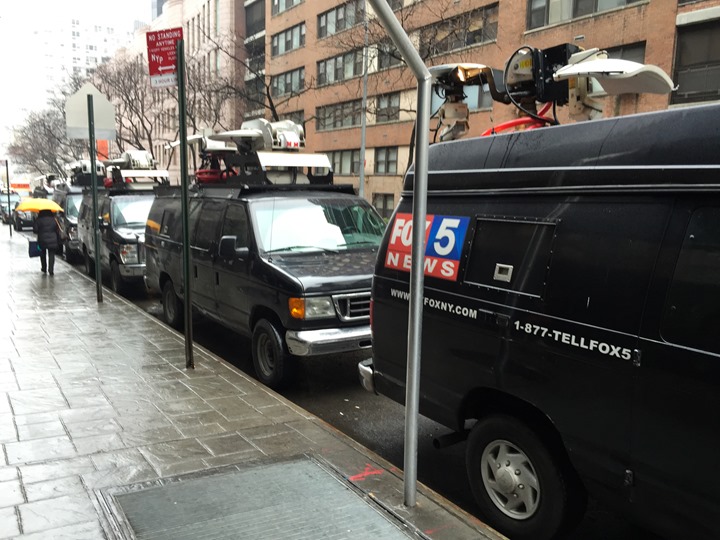 With that – thanks for watching!  And again, thanks to the super-friendly FOX NY crew for having me aboard!