Here’s my second roundup of Eurobike tech snippets.  The Part 1 roundup can be found here.  This is in addition to all my other more Eurobike product-specific posts where the focus was a single product or company.  Let’s dive right into things. 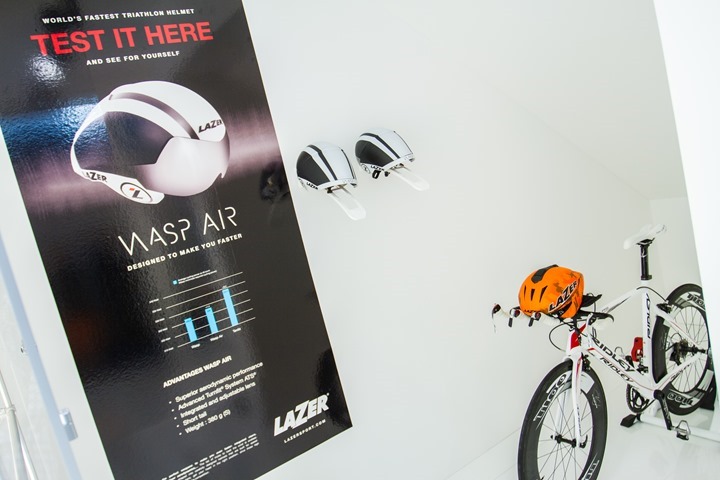 First up is Lazer, who was on hand demonstrating a small pod that attaches to their WASP aero helmets and lets you know when your head position is no longer aero.

One of the biggest aero challenges for triathletes and in particular in long course triathlon is that over time their position shifts as they fatigue.  In the case of head position that could mean that you’re head is pointed too far down, resulting in the tail of your aero helmet acting more like a wall sticking straight up behind your head. Not at all aero.

The sensor concept is remarkably simple: You simply use the buttons on it to set ‘level’, and then from there on out anything that’s not level will beep and vibrate at you.  So if you tilt your head too far down, it beeps, or too far back, it beeps.  In the final production versions it won’t beep for side to side (in the prototype it was).  The sensor can be seen as the little white box on the back. 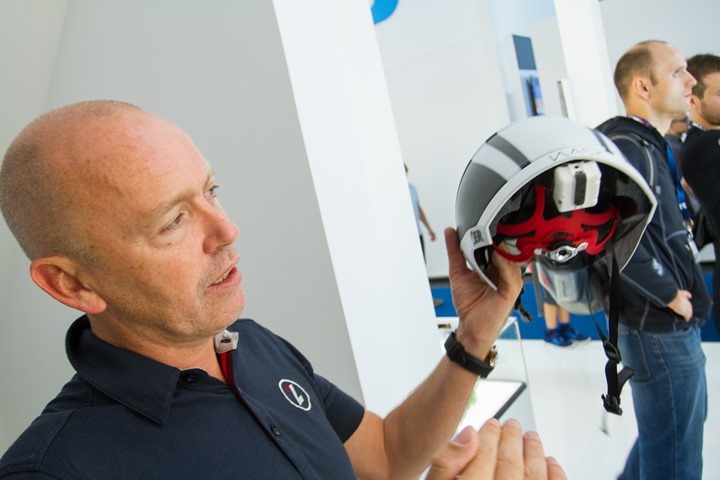 The idea behind the sensor is that it fits into their existing WASP Air helmets via a Velcro system, while their newer helmets from January onwards will have a more improved design to accept it.  Right now the pod seen is a bit bigger than final production.  The final version will weigh in at 20g. 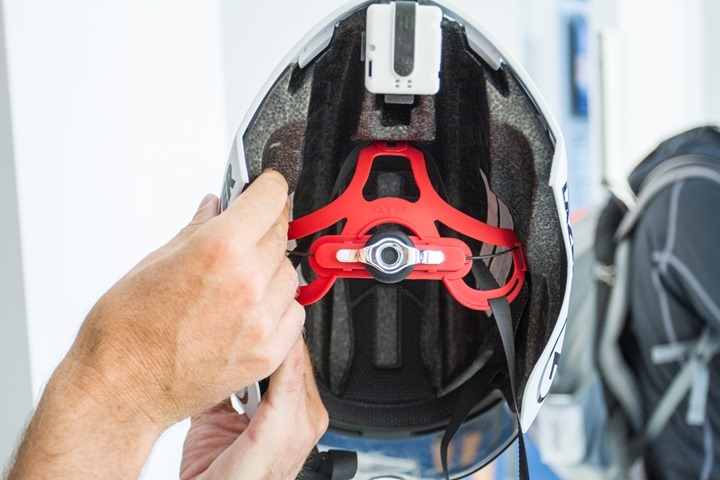 Here’s another prototype variant with a bit thinner design that was electrical taped in there.  They admitted that quite frankly the same could be done with any aero helmet using their pod. 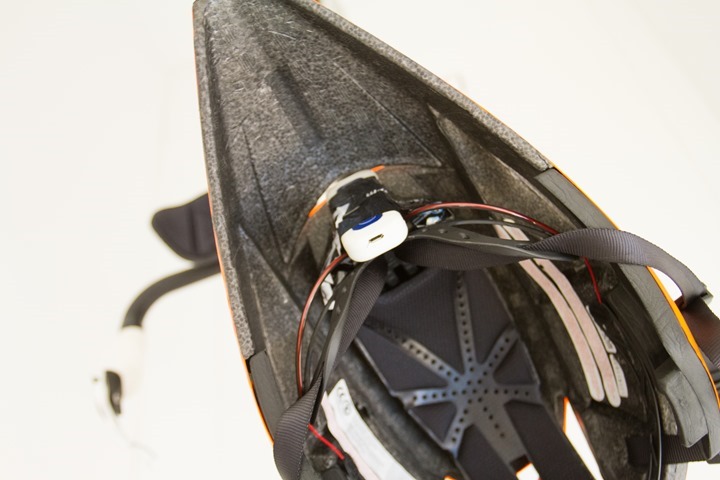 When you move out of position, it’ll both vibrate and beep.  Below is a super-quick video I put together demonstrating it.  The beeping you hear is from the helmet, not a grocery checkout line:

Fear not, if you get sick of it, you can simply reach back and toggle the switch off.  Super easy and accessible.

The final pricing isn’t quite yet decided, but they said it’d be under $100US, and available in March.

They noted that today it doesn’t comply with UCI rules (that’s not triathlon focused), but that they are working with Ironman and the other long-distance race organizers to ensure it’s allowed.  Currently an agreement is in place with Ironman branded events to permit it.  Pro Triathlete Jenny Fletcher should have raced with the system this past weekend in Austria at the 70.3 there. 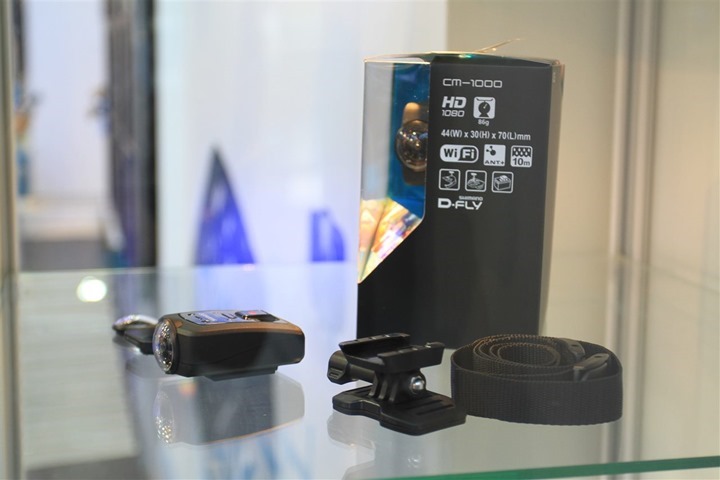 I swung by the Shimano booth at Eurobike to chat with them a bit about their CM-1000 action camera.  You’ll remember I posted about it back in July.  It’s a pretty cool little unit.  The operative word there being ‘little’.  It’s tiny.  And has quickly gotten attention in the peloton due to its size.

Overall, I like it quite a bit as it connects to ANT+ sensors and is easy to use.  The only catch?  The software still isn’t out to take advantage of that sensor data.  Thus, it’s no different than any other action cam on the market.  At the show they’re now saying later in September for the software.

I also asked if there were any other improvements they saw as possible.  Unfortunately, beyond knowing the software date – the reps really didn’t know anything else detailed about the camera.

In a nearby case there were some new rubber/silicon cases for the unit though, which could be worn to protect it.  Like an action camera condom. 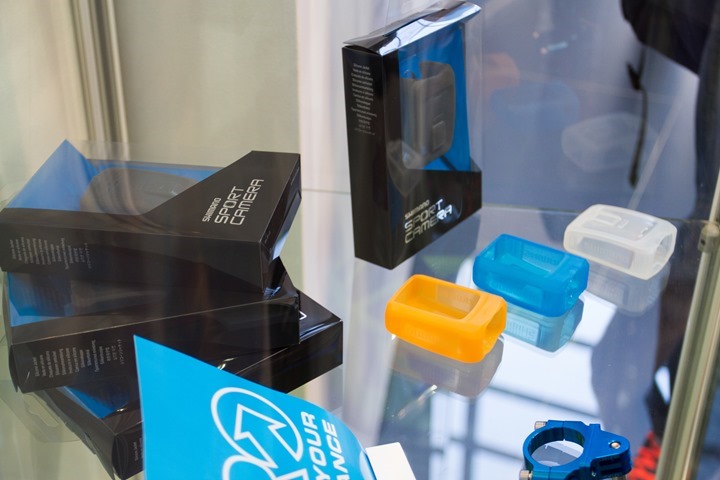 For my review of the unit, I’m pretty much just waiting on the software.  That’ll ultimately be the make it or break it moment there.  Hopefully it’ll come soon. 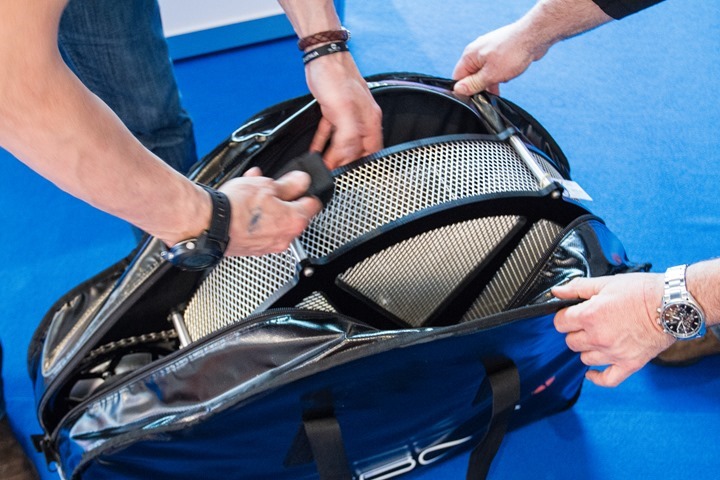 I had a chance to sit down for a few minutes with the guys from the New Zealand based Revbox trainer company.  They’ve created the below wind/fan-based trainer that generates a much higher resistance level, and does it at much lower cadences.  It’s apparently quite popular in Australia and New Zealand, though it hasn’t really taken off in Europe or the Americas yet. 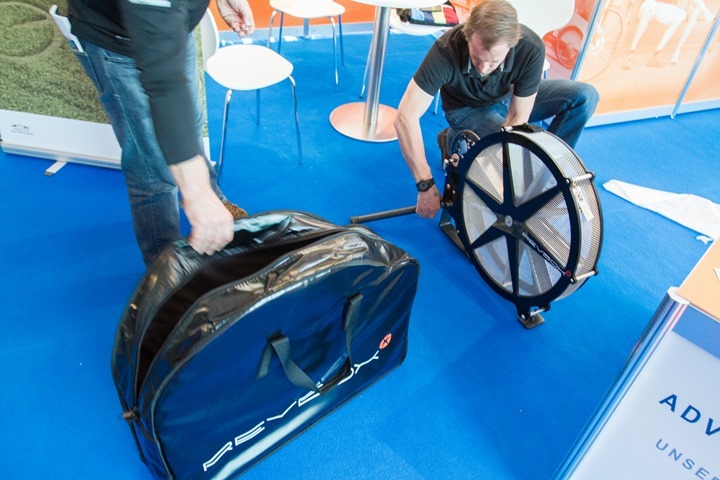 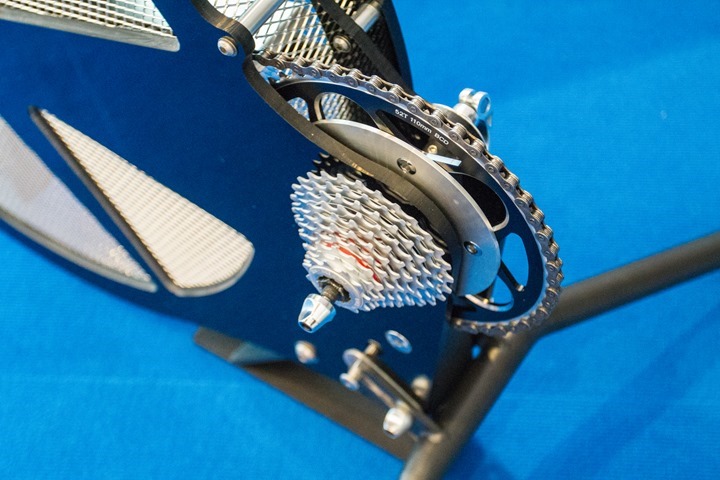 The whole thing took them all of about 2 minutes to put together from its travel case.  As you can see above, the unit is pretty beefy when it comes to the componentry, designed to potentially sustain some serious wattage. 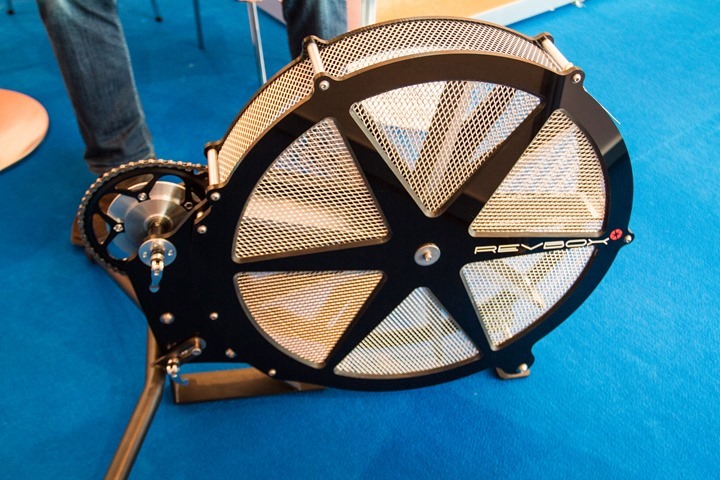 I didn’t have a bike there to demo, but no worries, a unit already arrived last week right before I headed back out.  I won’t have a chance to unbox it till post-Interbike, but am looking forward to seeing and more importantly, feeling, the difference.  They’ve made a number of claims around the training benefits of this particular type of trainer, so that’s a core aspect I’ll be looking at.  Today it doesn’t have any integrated ANT+ or Bluetooth Smart sensor capability for transmitting power, but it’s something we discussed as a possible add-on down the road. 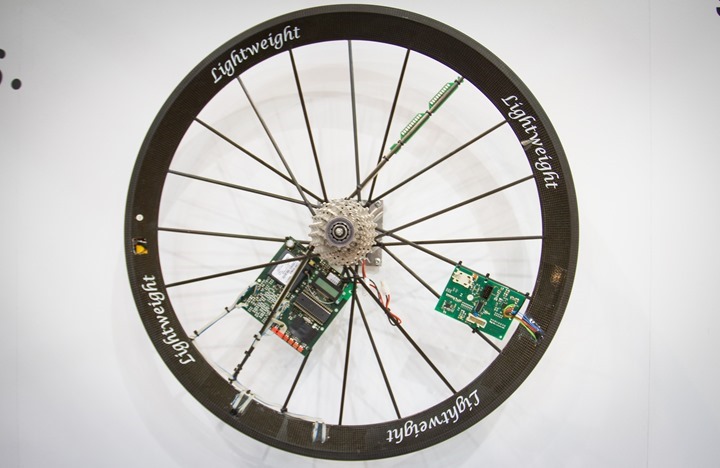 Next up we’ve got  a new product concept put forth by Lightweight.  They were demonstrating pressure and temperature sensor-equipped wheels.  The original goal of their project had nothing to do with making an actual product, but rather, merely to measure the temperature of the tube/tire during severe braking.  Initially the rig started out pretty crazy looking.  Hello Laptop! 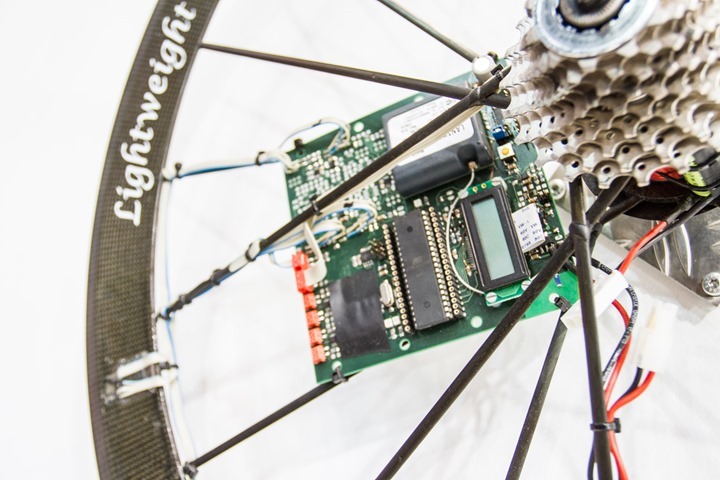 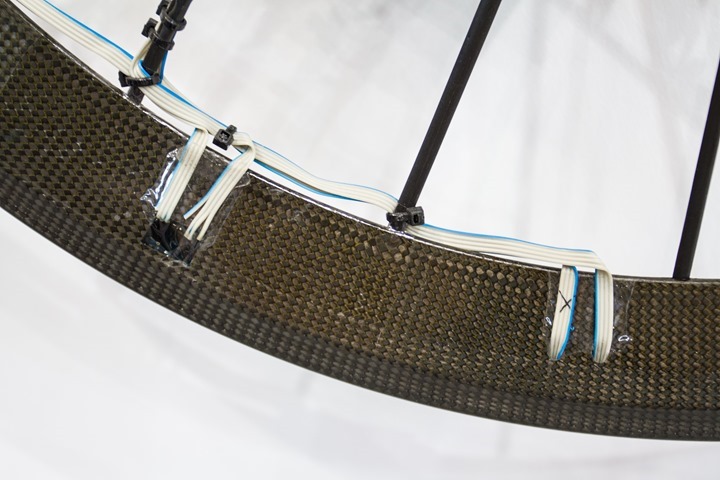 But, on the second generation unit it got smaller: 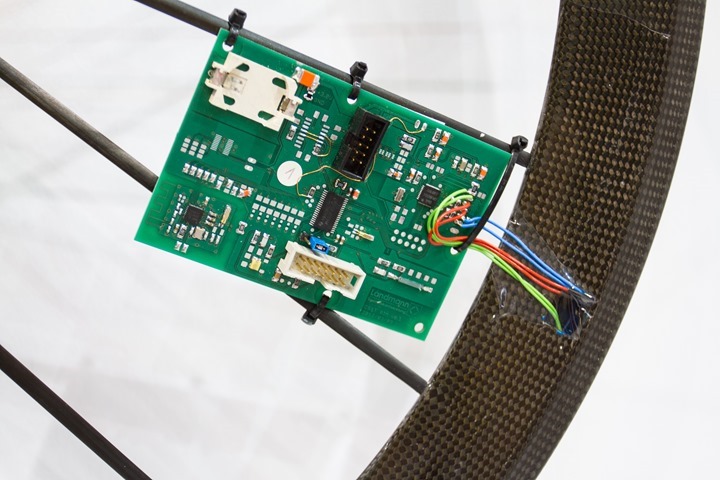 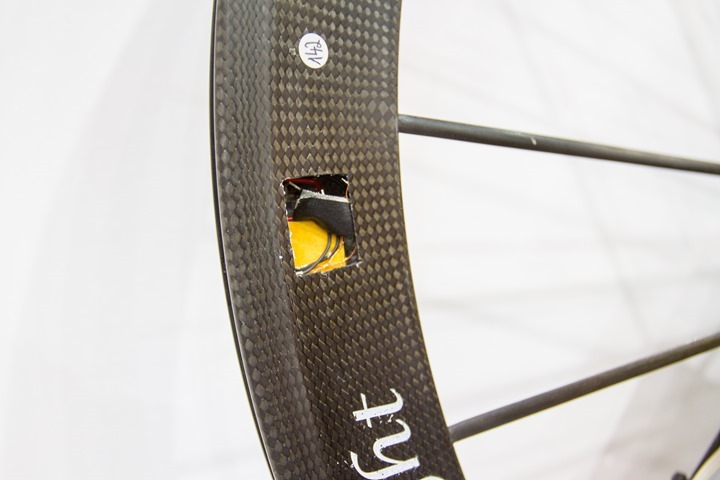 And finally, on the third and current installment, it fits entirely within the wheel frame: 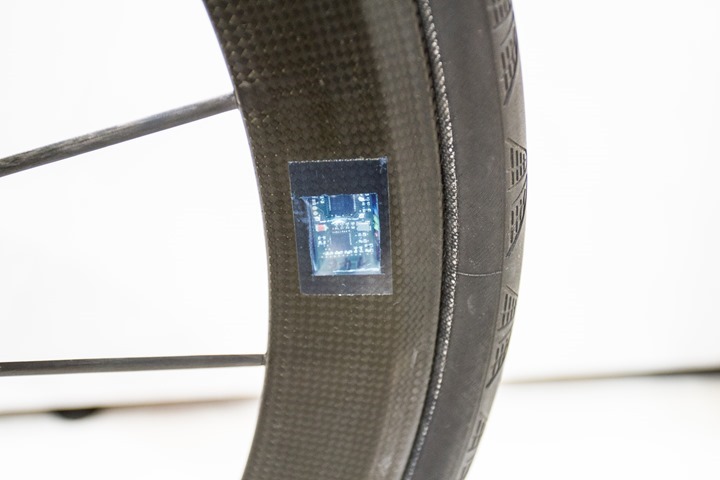 The unit then measures both the temperature at the edge of the rim (internally), as well as the pressure of the tire.  Seen below, the temperature is 24°/23°, and the pressure is 1.4bar and 6.9bar.  The front tire wasn’t really inflated much.  The back tire obviously a bit more. 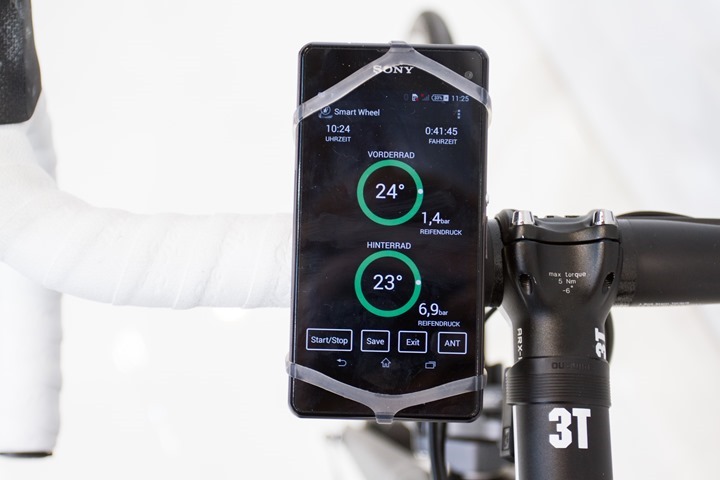 It was interesting pinching the tire a bit and watching the pressure fluctuate.  The changes would show up within about 1-2 seconds.

The data is all transmitted via ANT+, in this case to a custom app they’ve developed.  They noted though that they’d really like to work with Garmin (specifically) to add it to their head units, similar to how Shimano did on Di2 and the Edge 1000. 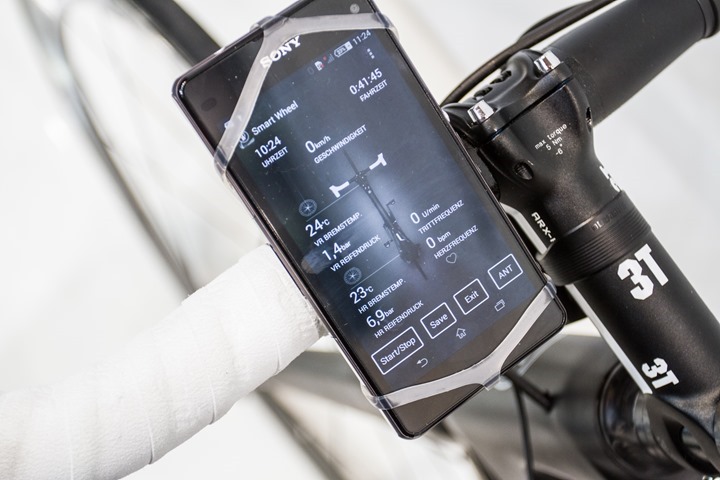 Of course, the idea of tire pressure sensors isn’t new.  Nor even ANT+ ones for head units.  That happened via Kickstarter a few years ago, but failed to lift-off.  And in that case, the price was reasonable…unlike Lightweight’s estimated $800 per sensor pair, plus the cost of their wheels.  Of course, it’s also just a concept.  So I suspect over the past week they’ve learned that people think that price is bat-crap crazy.

That said, it’s cool to see companies pushing the envelope.  I think there could be some interesting data collected and correlated against power meter data for different tire pressures at different external temperatures and conditions.  Like everything else though, it takes normalized data and likely lots of it for trends to become apparent. 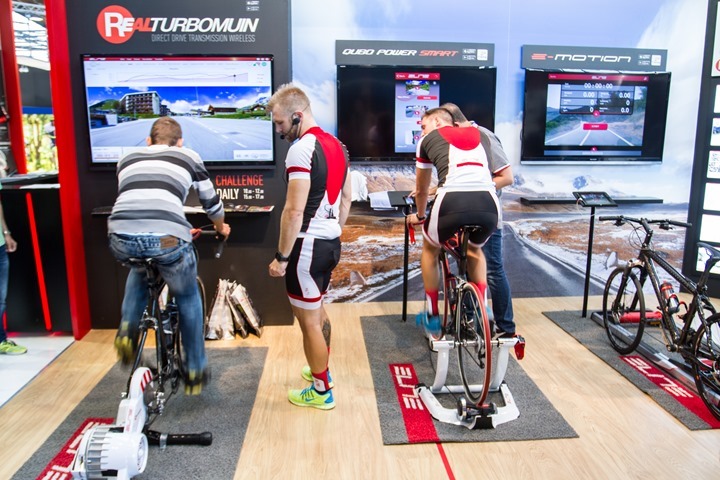 I just wanted to draw attention to an update I made to yesterday’s post about their Muin Trainer.  Due to some minor confusion in the booth I wasn’t given the details about their Real Turbo Muin new trainer, but just last year’s edition’s tweaks.  Turns out, there’s a pretty big new trainer offering, so I got the details from their crew last night.

Essentially, they’ve hit the market with a full resistance controller trainer with many of the same fluid characteristics of the existing Muin trainer (fluid, quieter, etc…).  It can be controlled wirelessly, and they plan to add ANT+ Trainer Profile support by the end of the calendar year.

Check out the updated section in yesterday’s post.  Further, look towards Interbike next week where I’ll give some more hands-on thoughts ahead of a unit arriving at my place no later than the end of the month in time for the 2014 Trainer Recommendations post.

That’s it for this year’s Eurobike roundup.  I leave you with the below photo, taken outside the hall on the second day.  There wasn’t much room for non-sports tech stuff this year due to my schedule being so packed.  But I did watch these guys plop into the water a bit. 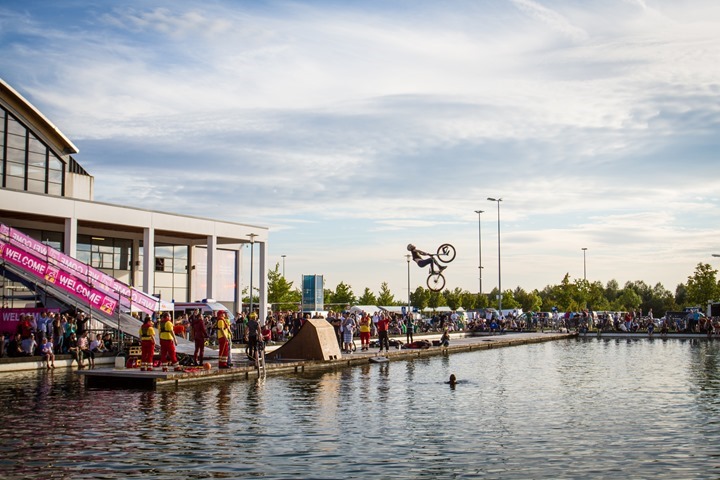 With that, thanks for reading!  If you’re looking to burn a bit of time, here’s all my Eurobike 2014 posts!  Next up…Interbike next week!