I’m operating on a bit of a 1-day broadcast delay this week, and not because I’m trying to protect anyone from any wardrobe malfunctions – but rather simply because it was a busy weekend as you’ll see below.  Plus, we’ve started a bit of a week-long road-trip down the West coast of France – so I’m sidetracked in enjoying that!

1) Delivered a wedding cake a few hours away to a chateau.

Despite my artistic inability to properly frost a cupcake according to the standards The Girl sets forth, I do have responsibilities at the CupCakery.  For example, I’m in charge of edible testing.  I’d like to think I’m a critical cog in ensuring the taste testing wheel goes around.

Additionally, when it comes to all things electronic or digital – I’m usually at fault responsible for the awesomeness of the design.

But there is one final responsibility that I’ve gotten somehow: Delivery man.

When it comes to any complex delivery outside of Paris, I’m usually it.  And, for that matter – any complex/big delivery inside of Paris.  So this past weekend on Friday evening we made the journey a few hours away to an area in Normandy where a wedding was being held Saturday.  I believe the drive took about 50% longer than normal, given we’re driving about 200% more carefully than normal.

Luckily we had no problems* making the delivery the next morning – with things turning out quite nice: 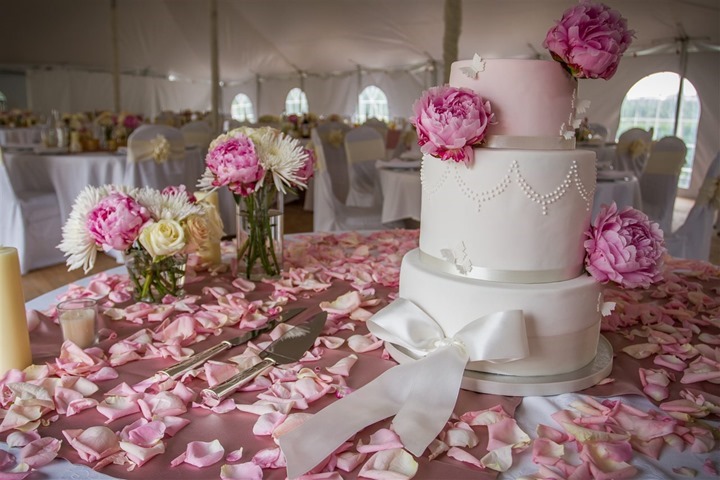 *By ‘no problems’ I mean that we found the correct chateau eventually.  The other chateaux that we visited were courtesy of Google Maps apparently thinking we’d like to house-hunt for chateaux.  But, the hosts at those were all quite friendly however.

2) Saw a chicken cross the road

Shortly after delivering the cake and being able to drive like a normal person again, we saw this cross the road in front of us: 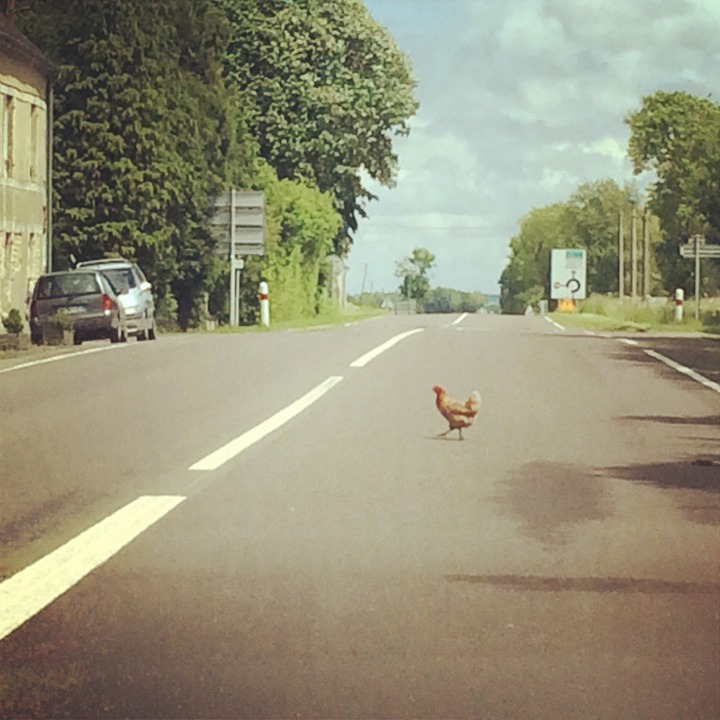 Yes, seriously.  We aren’t quite sure why he crossed the road.  But we are sure that he was definitely more successful than the road kill just to the right edge of the photo.  Win some…lose some.

3) In unrelated news…had chicken for dinner.

After packet pickup – which I’ll cover in tomorrow’s post, we grabbed dinner.  I thought it only appropriate that it was poulet. 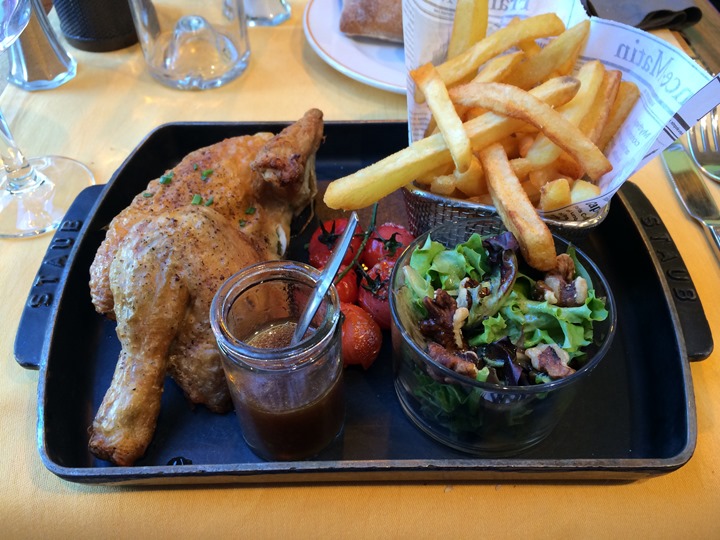 While Saint-Malo and the rest of the coast is well known for mussels, I figured it might be a poor selection pre-race.  Don’t worry, I’ve been more than making up for them since (3rd serving already!).

In order to mix things up a bit, I ran a marathon on Sunday.  It was a point to point event from the town of Cancale to the famous Mont Saint-Michel (2nd most touristed locale in France). 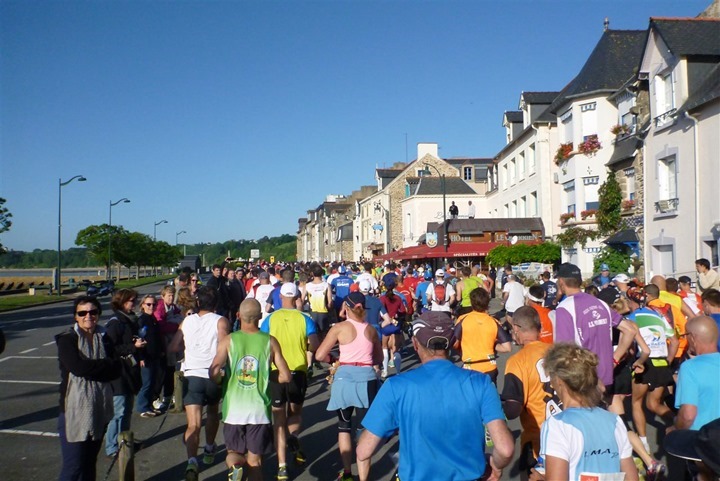 I’ll dive into that more tomorrow in my race report.  But, I had ‘fun’ running 26.2 miles.  And, being that you can actually see the finish line from the start line – it served as a very visual reminder that running 26.2 miles away is really rather far. 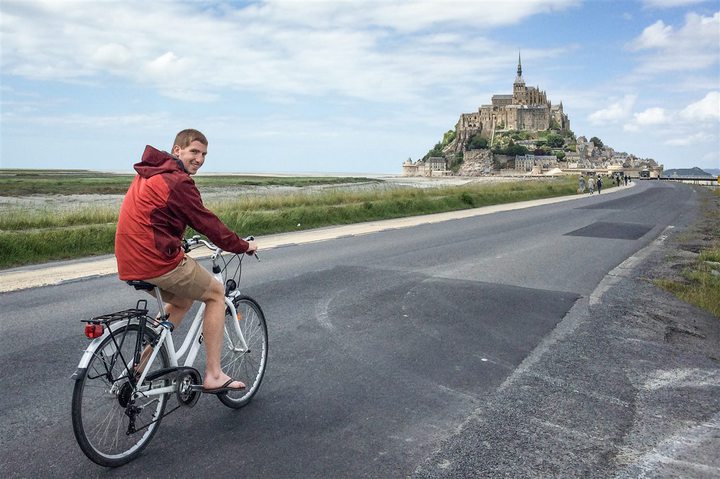 After hobbling over to the hotel, popping a few blisters and showering, we headed back out and grabbed the bikes from the hotel for a bit of a wander.

I’ve long noted the importance of an easy pedal post-long run (or post–race).  It makes all the difference in the world when it comes to recovery.  Note that I said ‘easy pedal’.  I generally recommend doing this on something less performance oriented…like…a beach cruiser. 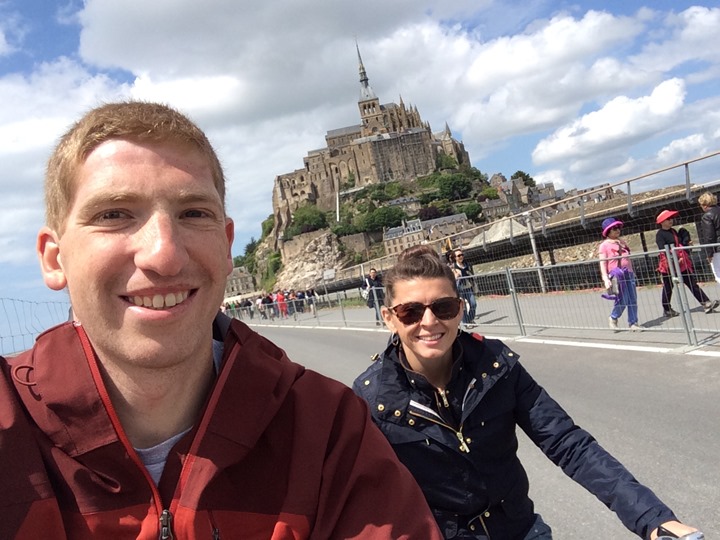 So we first cycled out to to the big island of sorts that you see above.  Then, after that we kinda set out wandering around on small paths and trails. 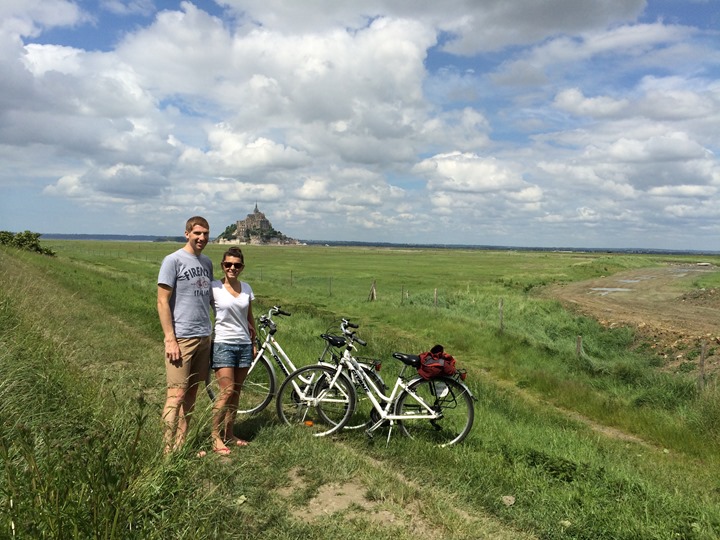 It was quite nice and really helped the legs.  In total we ended up just bumbling along probably a bit more than necessary – about 2 hours, albeit at all of 7 MPH.  No GPS on my bike, but just a swag on distance and time based on the rough route that we took.  Very enjoyable though, and nice that we saw almost nobody else out there (car or bike) during our wander after we left Mont Saint-Michel.

With that – more on the marathon tomorrow, and then a bit later in the week I’ll wrap up some of our journey down the coast before I head into the Pyrenees for some riding this upcoming weekend (albeit without The Girl, as she’ll whisk back to Paris on the high-speed train).

Thanks for reading, and hope everyone has a great week ahead!