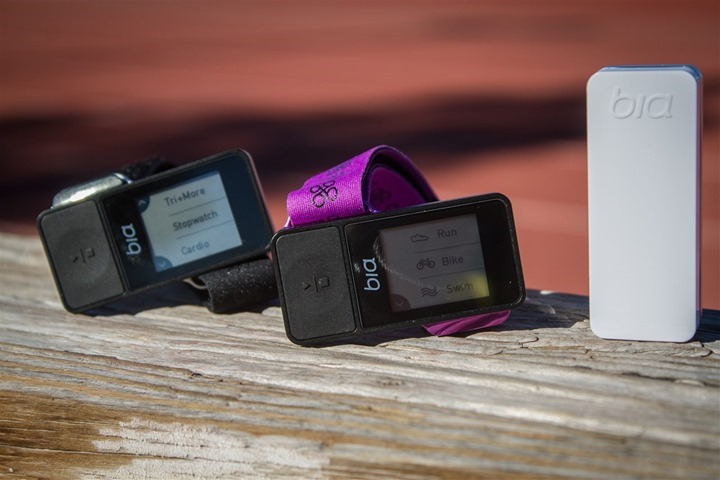 Earlier this week while in Las Vegas for CES I had the chance to meet up with the founder of Bia, the only womens focused GPS watch on the market.  Cheryl Kellond and I met me at the UNLV track allowing me to get a bit of a walk-through on the unit, which should start shipping here in a few weeks at the end of the month to Kickstarter backers. 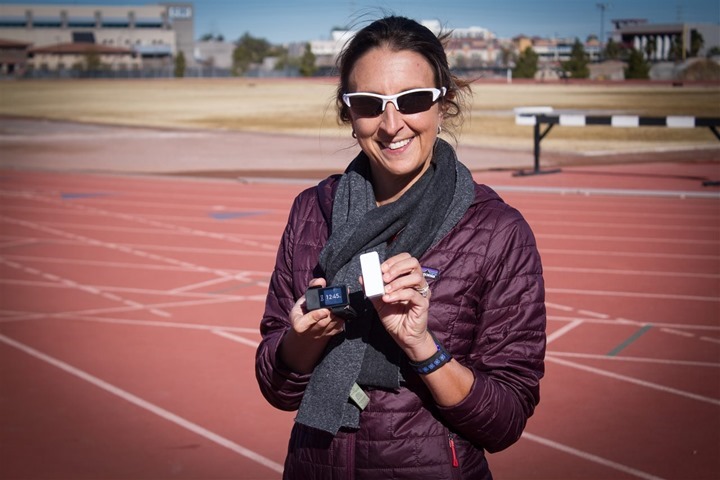 The unit originally started on Kickstarter about 18 months ago, as I previewed in a post then – though is now available for the general population to plunk down cash for pre-orders.

As you might notice above, the watch isn’t actually one piece however, but two separate pieces.  First is the watch portion, which you see below.

At first glance you may think it’s odd that it has a slightly crooked sitting position, however, the reason for that is to avoid being on top of your wrist bone.  As you can see, it fits perfectly around the bone just above the unit to the upper right.  Thus eliminating a very common complaint from women about GPS watches today.  As a bonus, it makes the display slightly easier to read while running. 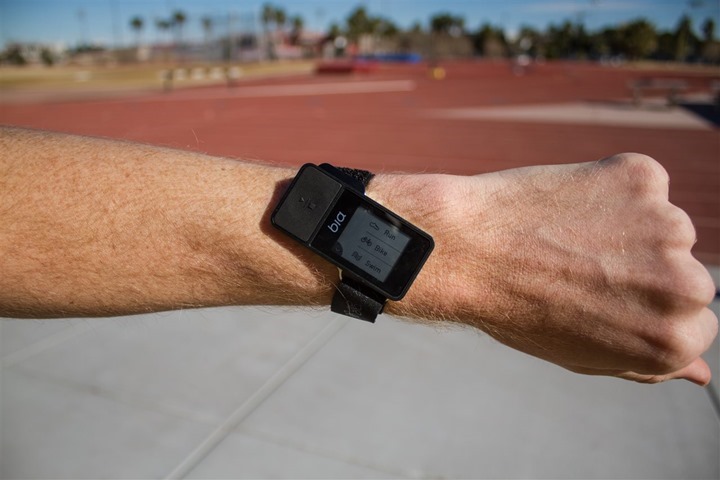 The wrist watch piece is fairly light.  It comes in at 30g (my by measurement, including the Velcro strap).  The weight is kept down by having the unit just be focused on the touch screen display and button.  It has a battery life estimated at 18-24 months. 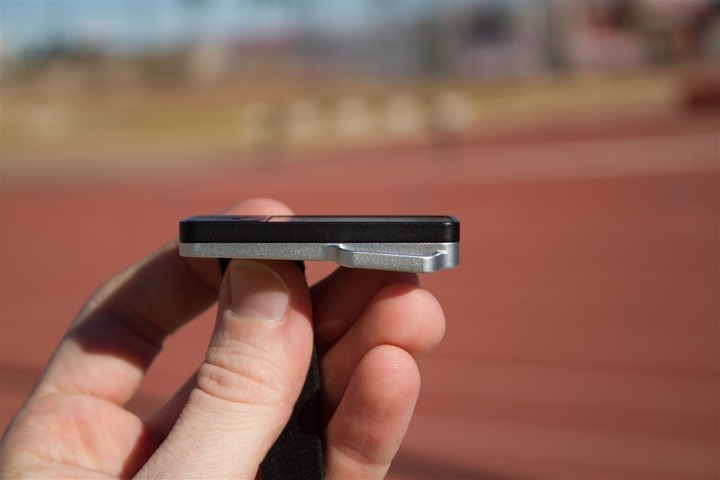 Next, you’ve got what they call the ‘Go Stick’, which is in the range of the size of a pack of gum.  This clips onto your waist band (or wherever else), and contains the GSM chip, the GPS chip, ANT+ connectivity, and then the storage for the unit.  Ultimately, it’s the brains of the operation.  For those familiar with smart watches – think of this as the phone, and the watch above as the smart watch.  Without the Go Stick, you won’t get very far. 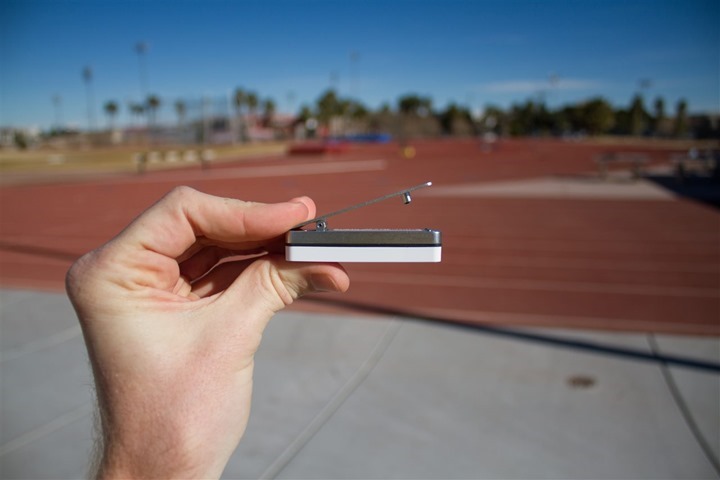 The Go Stick is the piece that you’ll need to charge – but gets about 17 hours of battery, designed to cover a full Ironman distance event.  You can see the little charging clip/cable below. 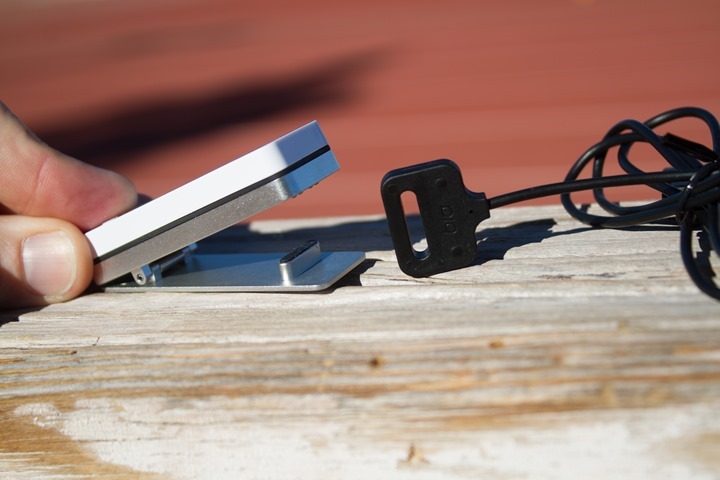 The Bia unit has a few unique features which haven’t been seen on a fitness GPS unit before.  Technologically, the two most groundbreaking ones would be that it includes GSM based live tracking…without requiring a cell phone.  Meaning, the unit actually has a cellular GSM chip within it, that allows it to constantly stream your location to the web. 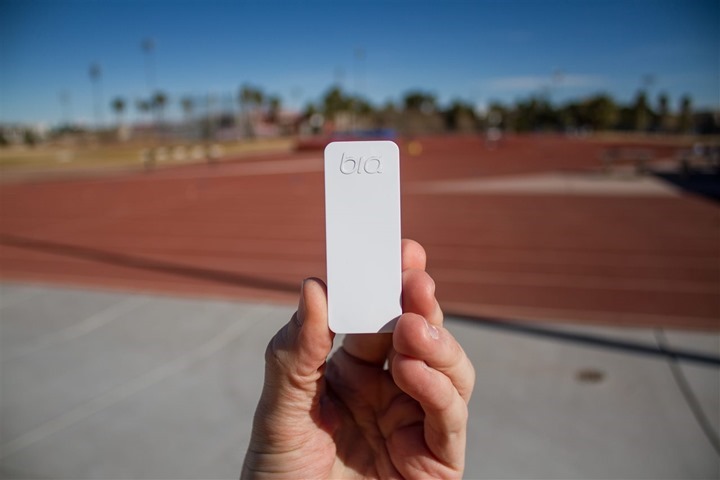 Cheryl noted that the live streaming level was quick enough to allow her team in a different location to give her turn by turn directions via telephone while they were following her driving through a foreign city.  The system has a cumulative 5-second lag in it – which is impressive as most others doing live tracking via cell phone are about 30-60 seconds.  Exactly how much they charge for live tracking remains to be determined, it could be a bucket of hours (like a pre-paid SIM card), or a straight monthly fee.

As part of that GSM chipset comes the the ability to have ‘Safety Alerts’.  By simply holding down the button for about 4-5 seconds, the unit will trigger sending an SOS message to predefined contacts – again, all without the need for a cell phone on you.  SOS/Safety alerts will/are free. 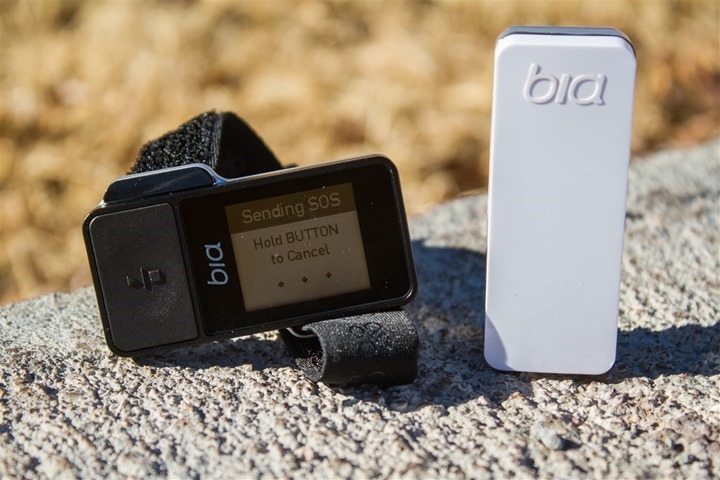 We played with this at the track a bit, and the alert came in about 20-30 seconds later to our cell phones, which had been pre-configured to be texted in the event of an SOS alert.  You can configure these text message contacts online via the site.

Now, what I thought was most impressive was just how darn accurate the SOS alert was.

Ponder the below image carefully.  You’ll see the Bia unit sitting off to the side on the wall.  You’ll see the location on the cell phone displayed (red dot).  Note the ‘V’ of the sidewalk in the image, and note that it’s in exactly the same part of the ‘V’ in the Google Maps image (that came from the alert text message).  Incredibly accurate.  Very cool. 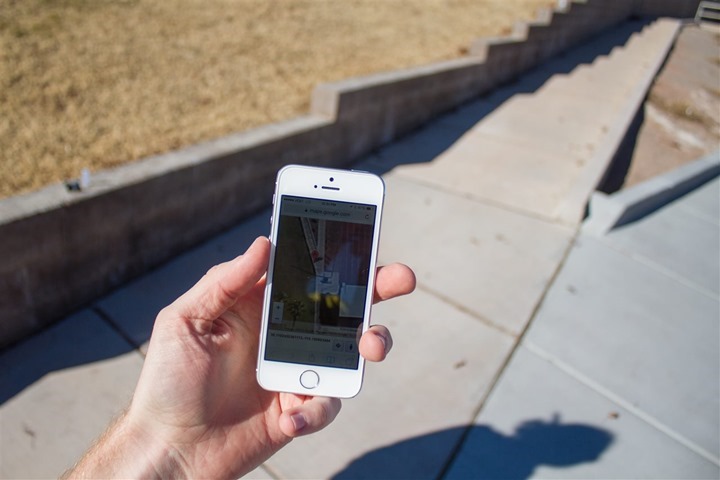 To cancel the alert being sent, you can simply hold the button down again. 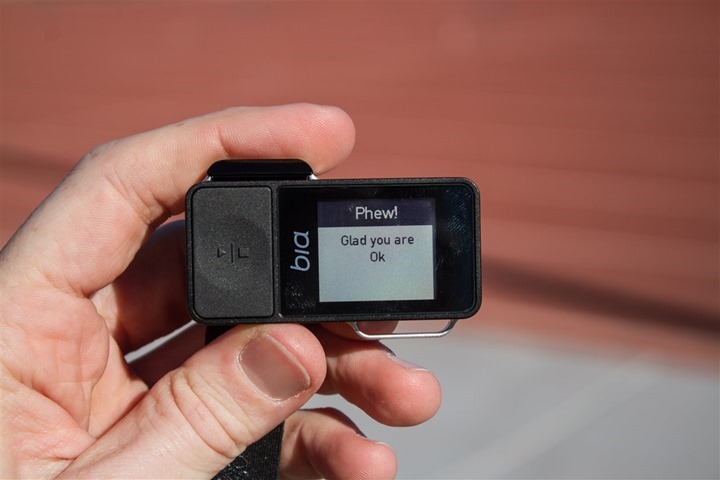 The unit supports triathlons, and thus can measure either all three sports as part of a complete activity – or can measure each sport individually.

Below, you can see the ‘starting’ screen where you choose which sport to pursue: 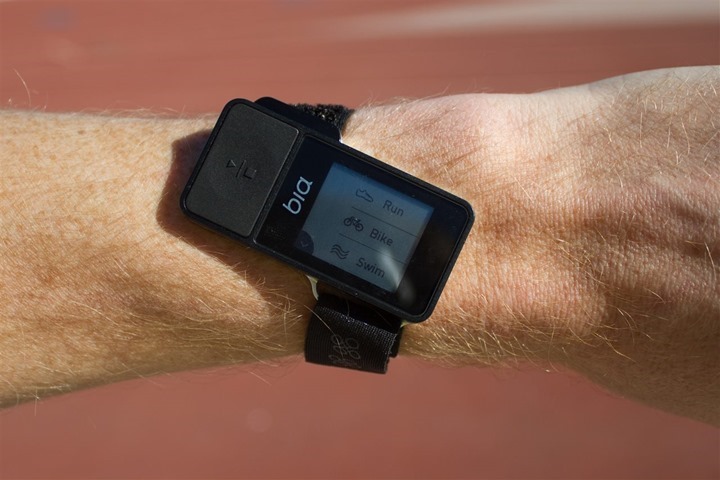 After selecting run, I’m given three further choices – whether to just run (basically, your standard tracking mode), to do Run/Walk (typical Run X time, Walk X time prompts), and then an Indoor mode for connecting to a footpod on a treadmill. 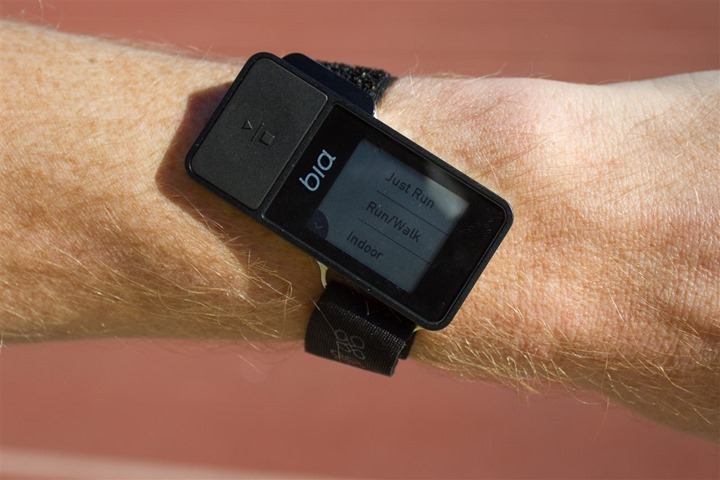 On the triathlon side, you can choose a standard swim/bike/run triathlon, or a duathlon or aquathlon. 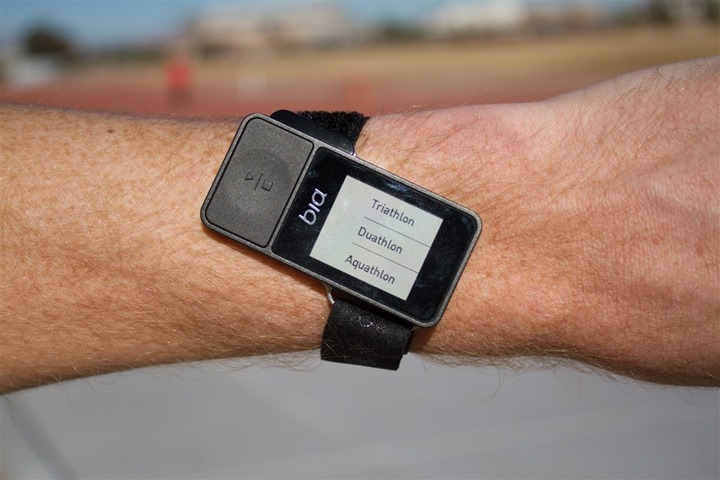 When it comes time to start running, the unit will first connect to the Go Stick, which seems to only take a second or two.  You’ll activate the Go Stick by shaking it.

Then, it’ll connect to satellites.  Like most new GPS watches these days, the unit downloads satellite location data ahead of time, such that it can find your location quicker.  It downloads the most data of any unit I’ve seen on the market, 14 days worth.

It also found satellites quicker than any unit I’ve seen on the market – approximately 1.5 seconds.  This was true both in Las Vegas, as well as in Paris.  Now, some of that quickness may be because by time you get to the prompt of displaying satellite connection, it’s already had a few second head-start on you. 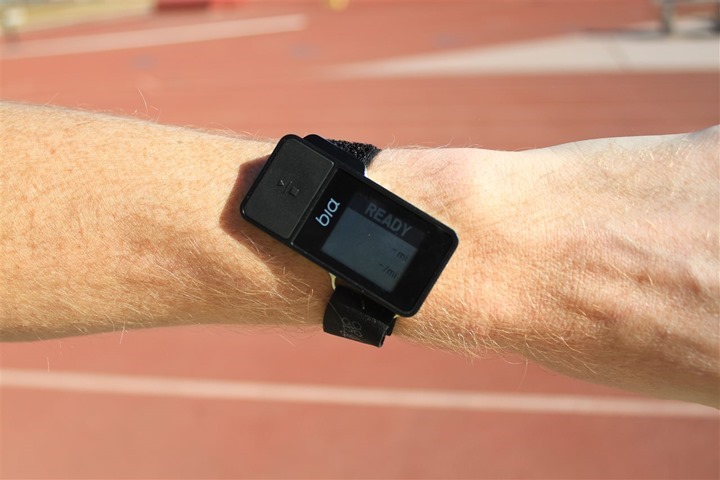 As for the go Stick, I just clipped it to my waist band: 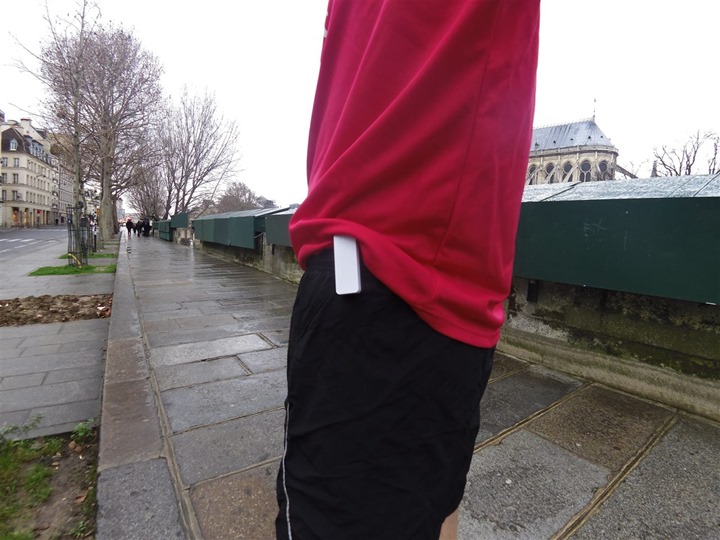 With that, while in Vegas, I headed out for a few loops around the track.  Keeping distance on a track is actually the hardest thing for a GPS unit that I can find (seriously).  The constant curving nature tends to throw off units, even if only by a tiny amount.

However, the unit tracked very well in my simple 2-loop test – spot on (this is the completion screen): 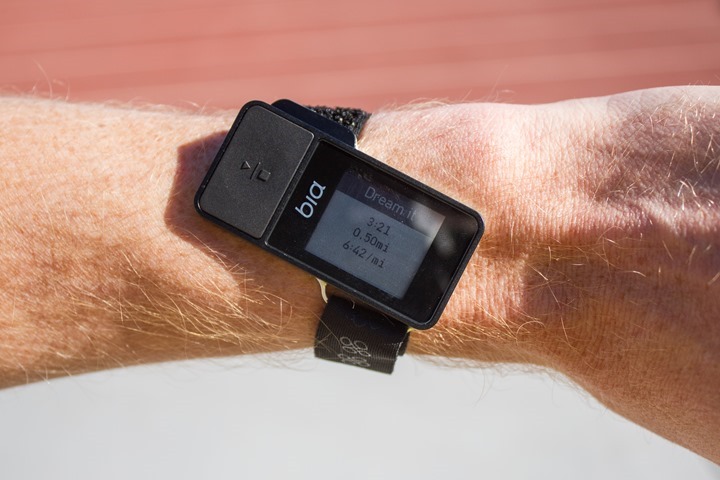 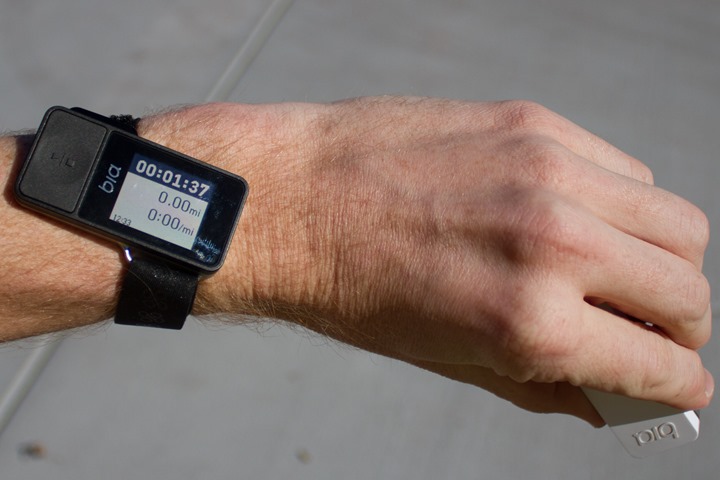 Once back in Paris, I did a nice 40 minute run post-flight.  In the rain (of course it’s in the rain, what else would it do here…). 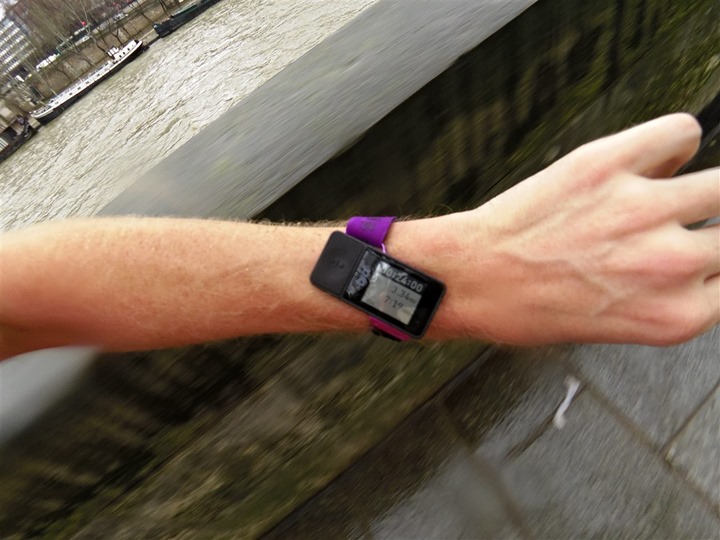 The unit tracked well while running.  The instant-pace is something they’re still working on (a bit oversensitive), but it was good enough during the run for me to pace by, despite the occasional bumps.  By time I had gotten back in my front door, the unit had already uploaded the run via GSM (it works internationally) to my online account. 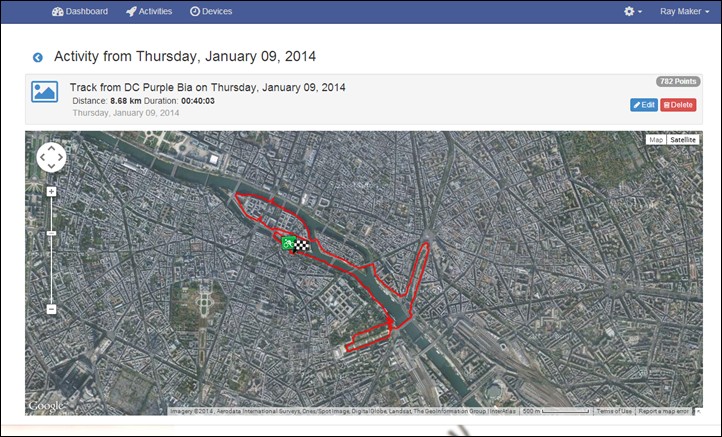 The track file was nearly spot-on where I ran, albeit slightly shifted by about 10m from my actual path.  In talking with them last night, they realized that they hadn’t yet adjusted the DATUM for France yet – which they believe would result in the slight offset I’m seeing here that I didn’t see in the US.  So they think they’ll have that all sorted out this weekend.  Given it’s still beta, that’s understandable.

In the US if I looked at the track file from my run around the track – it’s almost perfectly exactly where I ran on the inside lane all the way around. 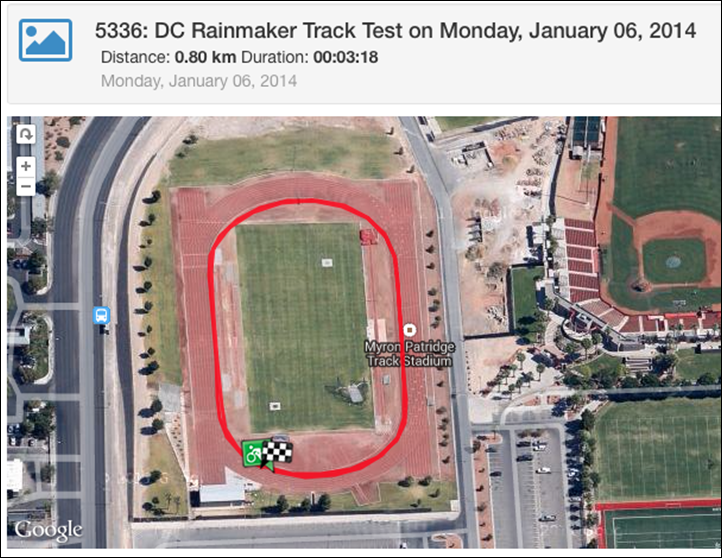 Upon release you’ll be able to export out your files as TCX/GPX (which work with everyone out there), and in addition they’ll also have automatic uploading to Strava and Training Peaks (the first hardware unit on the market to do so to both to my knowledge).  This would include stuff like heart rate data via ANT+ as well.

Finally, of note is that the unit has firmware updates via GSM automatically – so folks don’t really need to do much of anything to get the updates.  It just happens, and is free. 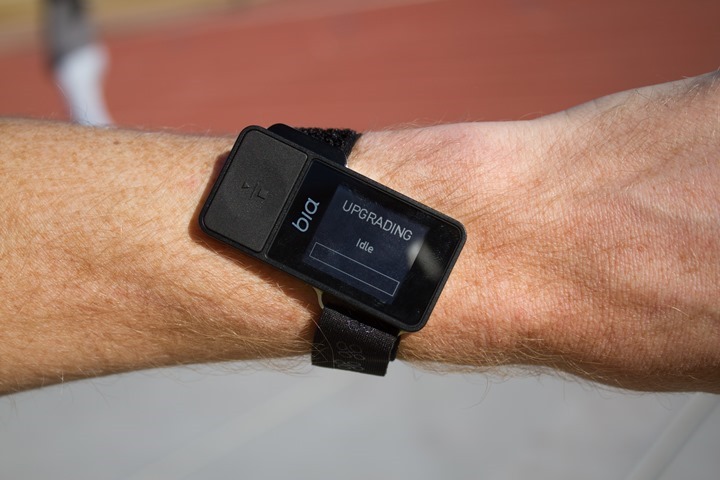 The prototype unit I had worked well overall, but of course there were minor beta/prototype hardware bugs I saw.  All of the issues that I did see they had already addressed outside of my unit, so that’s good.  As noted earlier, they hope to begin shipping out units by the end of this month to Kickstarter backers.

There will be some features that won’t be there upon launch, but that they’ll phase in over the next few months.  I’ve noted those in the comparison tables with dates of when they’re coming.  Which, is a point of note.  I’ve now added in the Bia watch into the product comparison tool, so you can mix and match and see how it shakes up against other units.

Given the planned price point of $279 (Kickstarter folks got it for quite a bit less), it obviously won’t have the feature-set of a Garmin FR910XT.  And in fact, Cheryl was pretty clear that’s not her target market, and she doesn’t want the unit to be that complex either.

Rather, it’ll be more targeted at folks who may have been looking at something like the TomTom units, which are simpler/easier to use units.  Of course, with the Bia’s features targeted at women, that’s clearly their target market.  Though, they do have different color units and bands – like the black unit seen below – so men can wear it as well without going all purple. 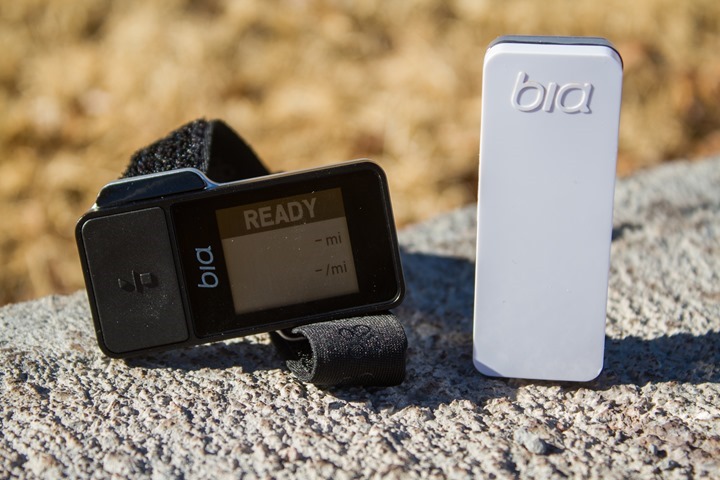 Finally, once they get the majority of their features in the unit sometime this spring I’ll do a final In-Depth Review.  As always, this isn’t so much a review as just a first look at things.

With that – thanks for reading.  And feel free to add any questions below!