Samsung to add ANT+ to full range of mobile devices, plus a look at the S Health app 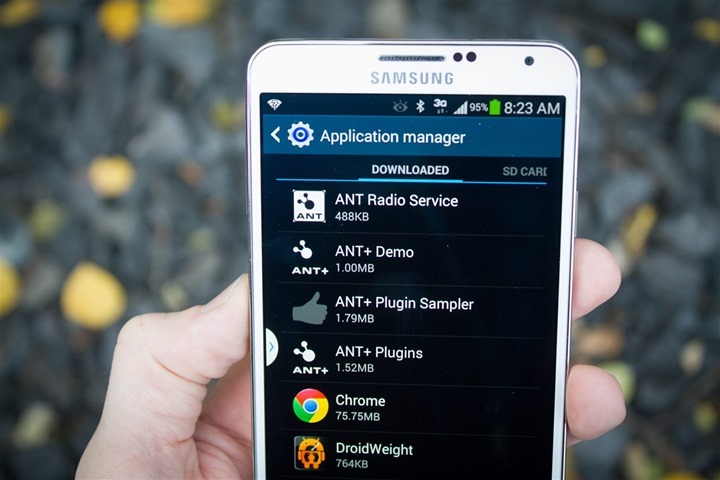 ANT+ being added to all recent and new Samsung mobile devices:

Probably the single biggest bit of news that came out of the ANT+ Symposium last week was Samsung’s announcement that they’ll be releasing ANT+ to all S4 devices in the coming weeks.  This built upon the previous announcement made just over a month ago when Samsung unveiled that they were adding ANT+ to the latest Galaxy Note.

But in reality that turned out to be just the beginning.  Samsung has now committed to enabling ANT+ on the following devices current/new generation:

This means that ANT+ will immediately become available on more than 20 million S4 devices that were shipped (and that’s as of July, we should get the updated FY14 Q1 numbers any day now).  Further, all future Samsung mobile devices (i.e., the eventual S5) will also get ANT+ support, and will broaden beyond just the above list. Probably the most useful device on the above list being the standard Samsung S4 mobile phone (the base/most common model).  Yet interestingly (and unfortunately), the Samsung S4 Active variant won’t get the ANT+ support.  The Samsung S4 Active is unique in that it can go underwater with you to the pool.  Which is more about not having to worry about the phone in day to day sports activity (cycling in the rain), than actually using it while snorkeling or swimming.

The update enabling ANT+ on these devices will be included as part of the Android 4.3 update – which also brings full Bluetooth Smart compatibility to these devices as well.  A funny twofer that lights up both protocols equally.  The timeline for this is release within the next month (at latest).

As you can see in the above development device in the first photo, the ANT+ Radio Service and ANT+ Plugins will also be installed by default on these devices – ensuring application compatibility out of the box for ANT+ connectivity.

With the addition of ANT+ you’ll be able to connect to any ANT+ sensor with apps that support it – such as ANT+ Heart Rate Straps, ANT+ Power Meter, ANT+ cycling sensors (speed/cadence), and anything else that an application wants to connect to (as you’ll see in later sections).  Further, the S Health app will directly connect to a slew of sensor types immediately, and in the future even ones like the ANT+ racquet sensor. 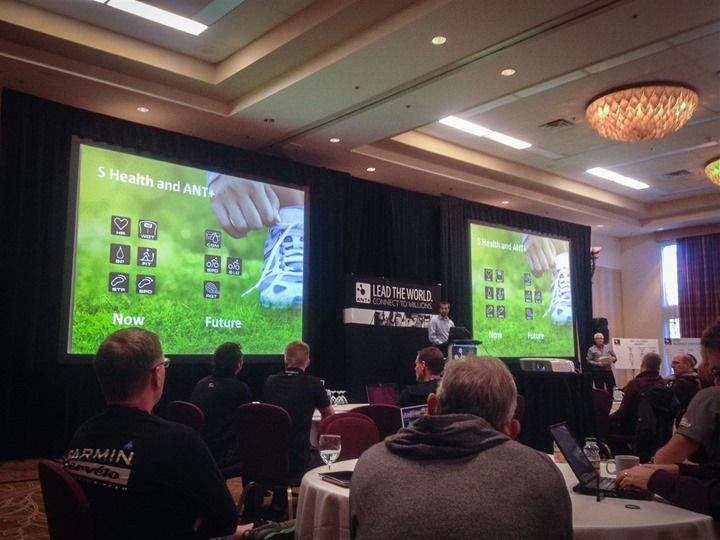 Today, the number of Android apps that support ANT+ devices is somewhat limited.  There are apps that cover the major scenarios – such as IpBike as a cycling head unit.  Though I think we’ll see a nice expansion of compatible apps – hopefully ones that will also have a heavy focus on beautification of the user experience.

What’s interesting here is that I think this could serve as a bit of a catalyst for Android ANT+ apps.  This is further fueled by the Garmin Monterra Android device announced this summer, which is a bit of an experimental product by Garmin aimed at the outdoor/hiking market.  That device includes ANT+ support and would enable apps to run on either platform (Samsung or Garmin) and do as they please with the sensors.  This means companies like Strava or Garmin could develop apps to take better advantage of sensors (right now neither really do much since it’s honestly not worth their time given low adoption numbers).

Finally, some have asked about the Samsung S3 phones and ANT+.  Technically speaking, the S3 actually does have a compatible chipset in the device to be able to enable ANT+ on them.  However, Samsung doesn’t currently have plans to do so.  What was interesting though is it seemed as though that was a bit of a soft-barrier, and not a hard set ‘no’.  Meaning, it seemed to me that they were keen on hearing if there was significant interest from S3 owners on getting it enabled.

Said another way – if having ANT+ enabled on your S3 is something of value to you, the comments section is a good place to extrapolate on your thoughts in a constructive and thought out manner.

A quick overview of the S Health App: 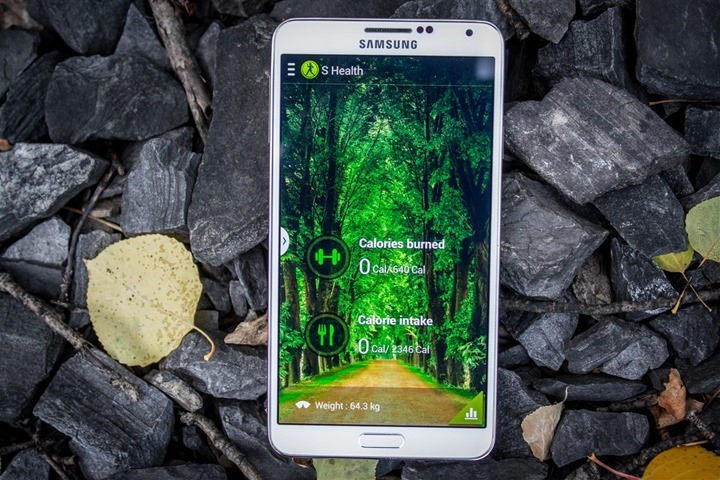 In addition to the core ANT+ changes coming to the Samsung device platform, there’s also the new S Health App.  Now, I’m the first to generally note that there’s probably too many health and fitness apps already out there today on phones.  So I was somewhat skeptical that this might be the same.  And in some ways, it is.  But in other ways, it’s got some very unique things that nobody else has – especially around device connectivity.

The S Health app is designed to be a bit of a central hub for fitness and health related activity on the phone.  The app will be pre-loaded by default on all Samsung Note 3, S4, and S4 mini devices, and they’re looking to expand beyond those devices but don’t have specific timelines yet for that. 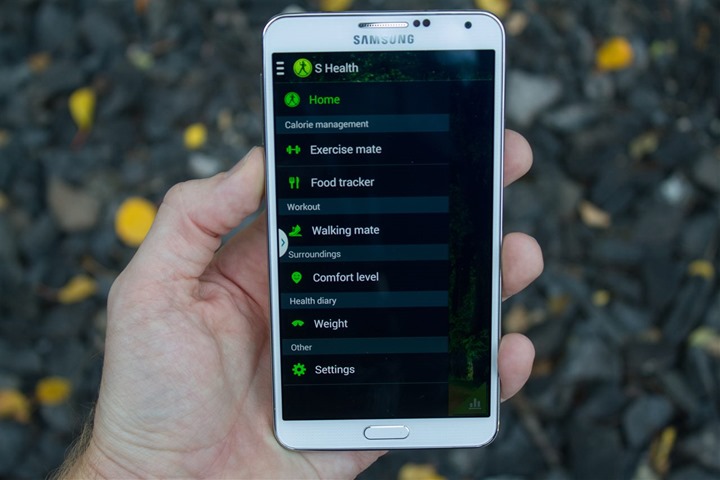 Starting with Exercise Mate, this allows you to record various activities such as running, cycling, or anything else other than walking (well, you can record walking, but this is more for a specific activity). 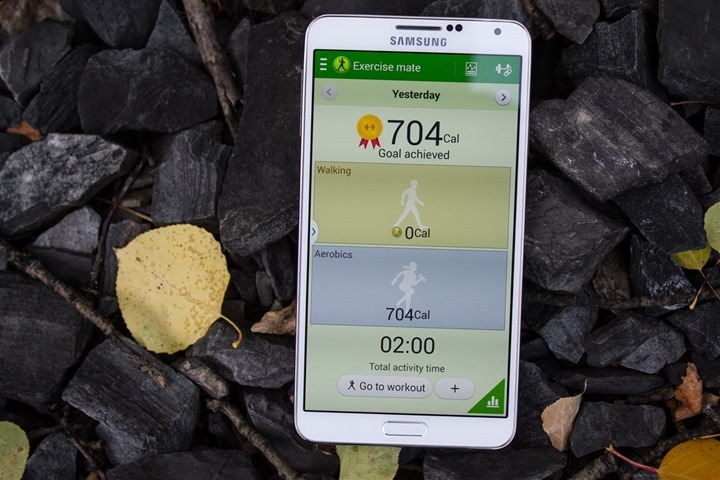 The key item here is that it leverages ANT+ to connect to a slew of sensors.  You can see some of these below, both ANT+ as well as any standard Bluetooth or Bluetooth Smart sensor. 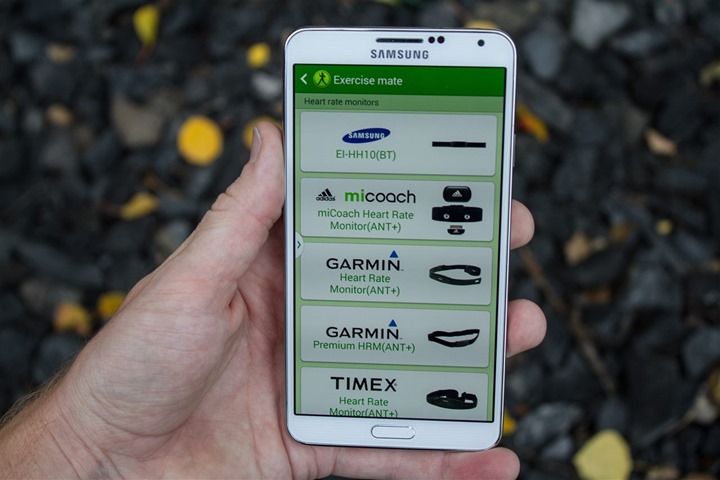 And yup, you’ll even see the newly announced Galaxy Gear in there too: 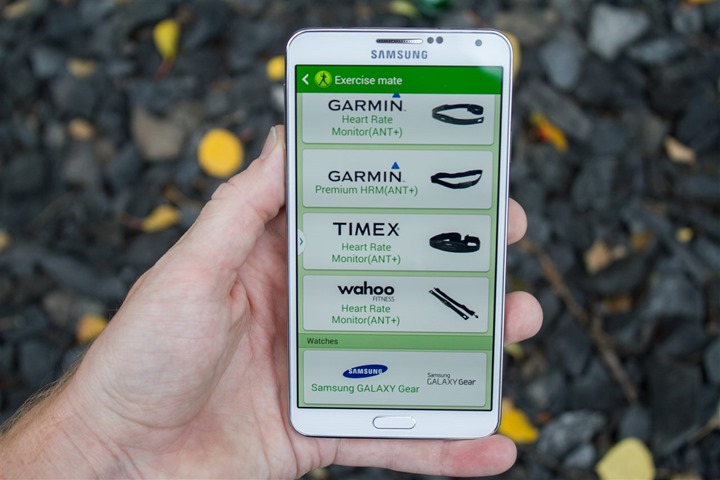 Now unfortunately, the phone I had available to take photos of didn’t have even half the devices shown earlier in the week.  So instead, they’ve provided me with a list (same as earlier) of all those devices:

Of note here is that there is also connectivity to the ANT+ Fitness Equipment devices (such as treadmills and stationary bikes), but that list isn’t quite ready to be released yet.  I’ve talked about these in the past in the context of connecting to Garmin watches.  They automatically stream data straight from the treadmill to your device – including speed/pace/power/etc…

Today out of the gate the official ANT+ device profiles they’ll be supporting within the app itself are:

They have plans in place to further add these ANT+ profiles:

There are some missing, the most notable is actually power meter.  Though, I think they’ll see some of the partners ask for that – and honestly, I’d have to believe there’s far greater demand for power meters over Racquets – simply looking at pure market adoption of devices.

Now, do keep in mind the above profiles have NOTHING to do with the underlying devices ability to connect to power meters.  These profiles are only talking to what’s available in the Samsung-specific app they’ve developed (S Health). 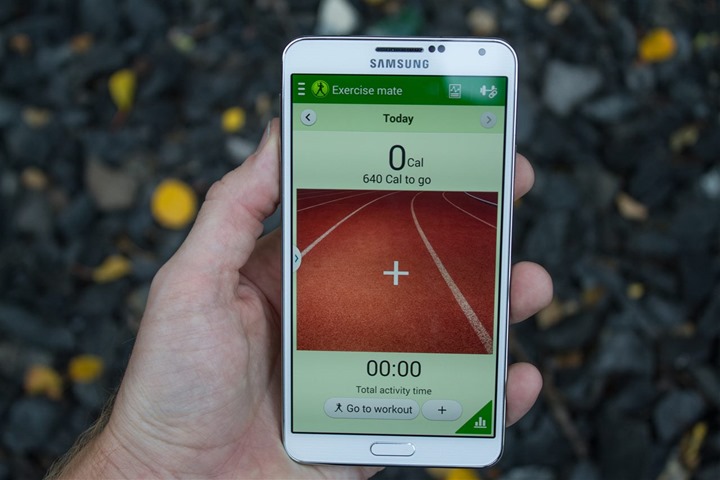 Now, the irony here is that the week before Garmin announced they were ceasing support of these devices going forward with the Forerunner 220/620 running watches.  Meanwhile, a week later Samsung announces support for it.  I suppose where one dies off, another is reborn.

Next we’ve got weight tracking.  You’ve got two options here.  First is to simply manually enter in your weight. 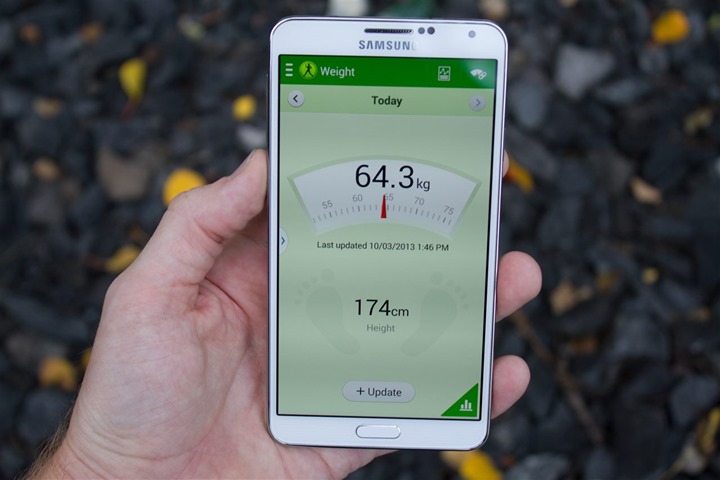 Or next is to connect to an ANT+ enabled weight scale.  Again, the ironic part here being that the week prior Garmin also cut ANT+ scales going forward from the upcoming FR220/FR620 watches. 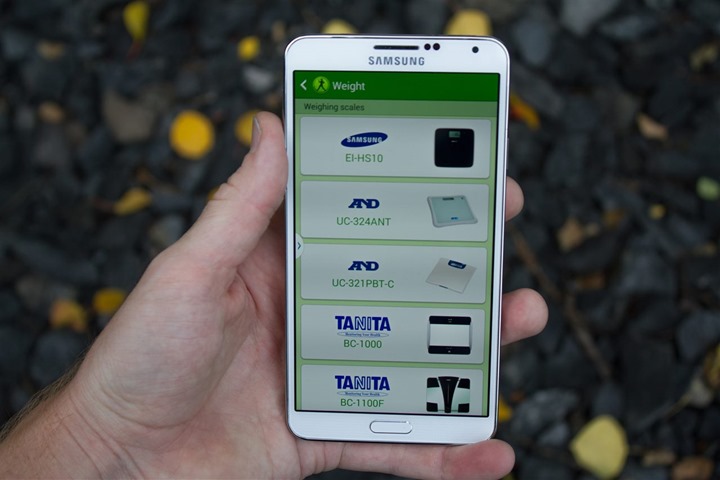 You can see this better represented in this slide they shared, which talks to some of the devices that they’ll be supporting out of the box: 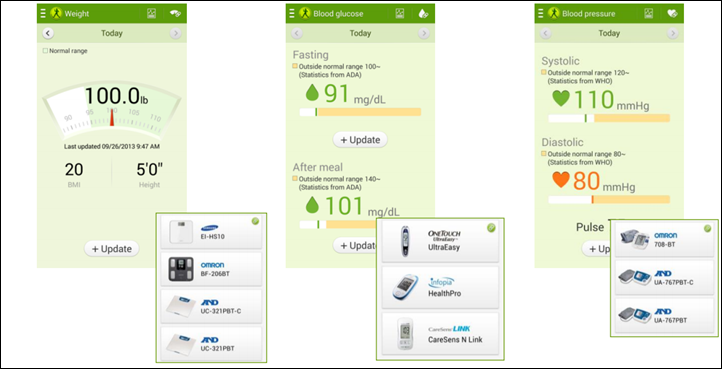 As part of the app you can then add in 3rd party services/platforms/accounts to upload exercise data.  Right now, that list of apps is pretty slim – just a Samsung and Netpulse online platform.  But the team noted they’re extremely active to add any partners that want to be enumerated here.  For example, Training Peaks, Strava, MapMyRun, etc… all being prime candidates. 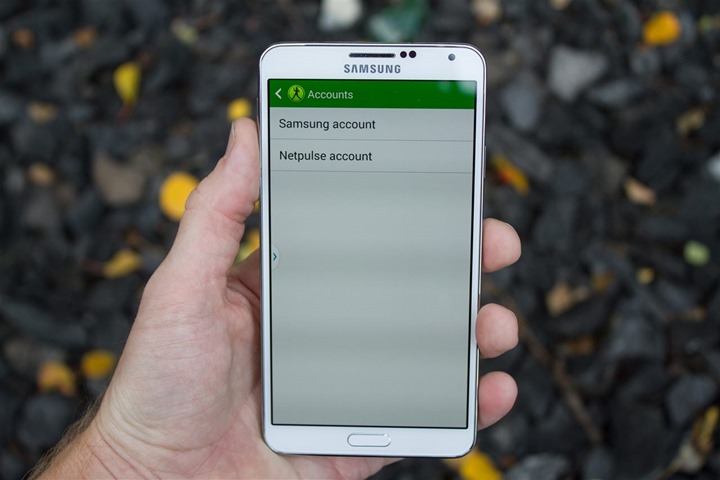 Lastly, while I have no photo of it, the Walking Mate app then records your walking activity over the course of the day – just like a FitBit or Nike Fuelband.  This occurs in the background 24×7, with what the team described as “unnoticeable” battery impact.  This concept isn’t new of course, other apps on both Android an iOS do this as well. And in fact the iPhone 5s takes it a step further adding a coprocessor to track and store data outside of the operating system dealing with it.  I think we’ll see that trend likely continue into other platforms such as Samsung’s as well.

All of this information is then combined together in the S Health App for a holistic picture of your day to day activities.  The unique aspect here being that it seems to cross both endurance sports type activities as well as daily activity tracking.  Most apps out there are just one or the other. 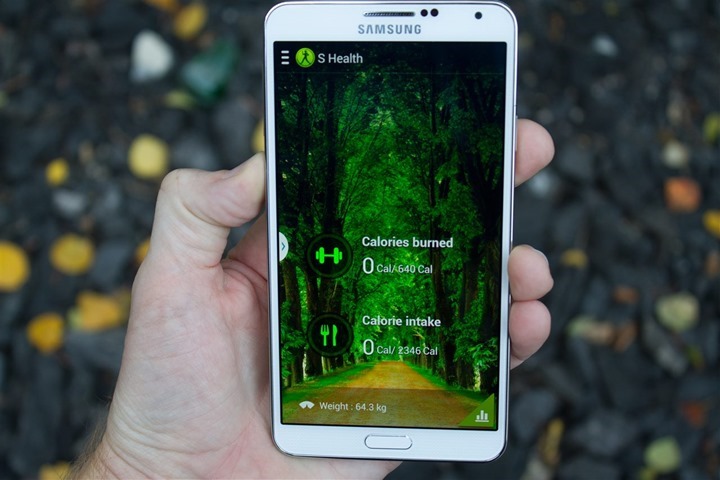 Here you can see some of these graphs being pulled together – showing exercise, food, and walking on a single day (photos taken at 8AM, so still early in the day). 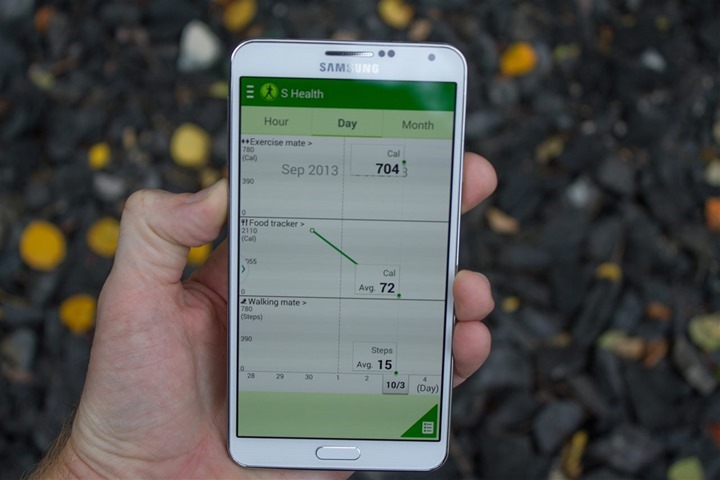 It’ll be interesting to see how this app develops.  I think the key here will be adding as many partner services and devices as possible – ultimately becoming the ‘go-to’ place for getting data onto the phone and into the cloud.

And, as far as the ANT+ announcements go, this is massive for them (ANT+) as long as apps quickly move to take advantage of it.  If apps don’t however, or if they languish in non-exciting user interfaces that don’t make users ‘love’ using the apps, then I think we’ll simply see interest wane.  Further, I’d really like to see them (Samsung) enable ANT+ on the Active, as I think that’s a key device that crosses over to the groups of consumers that would actually use the S Health app with ANT+ devices as well as 3rd party apps.

With that – thanks for reading!  And more still to come from last week at the ANT+ Symposium!