A few days ago I saw a tweet on the official Tour de France Twitter feed announcing some sort of gallery opening featuring 80 images from years past. After a bit of poking around, I found out that this display was actually just around the corner from me, up the hill at Luxembourg Gardens. A short couple minute bike ride away. 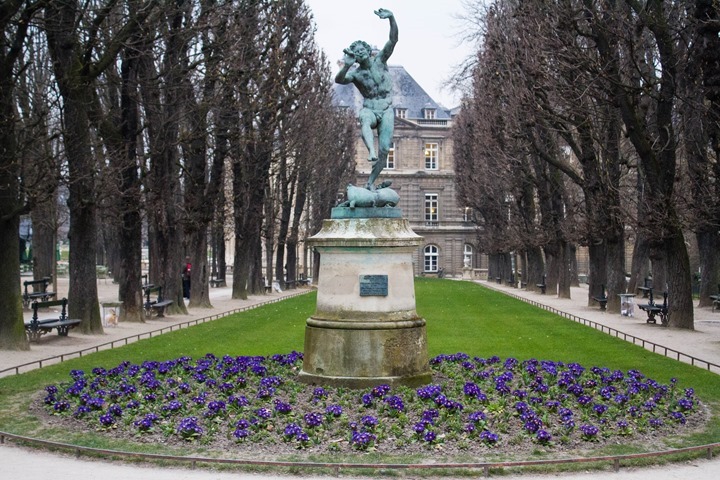 The opening event was scheduled to start at 6PM last night, so I grabbed a nearby Velib bike and headed the short distance up the hill. 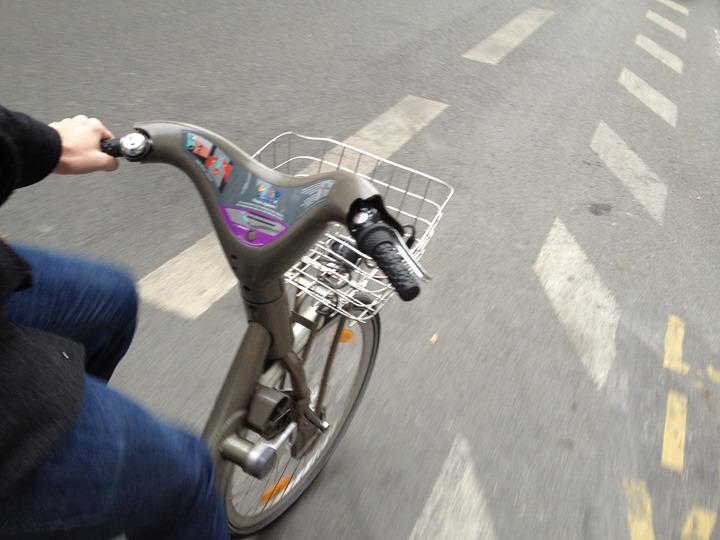 Upon arrival, I found a large swarm of people. Given this is where I often run loops, it was easy to differentiate between normal swarms, and non-normal swarms. This being within the non-normal variation. 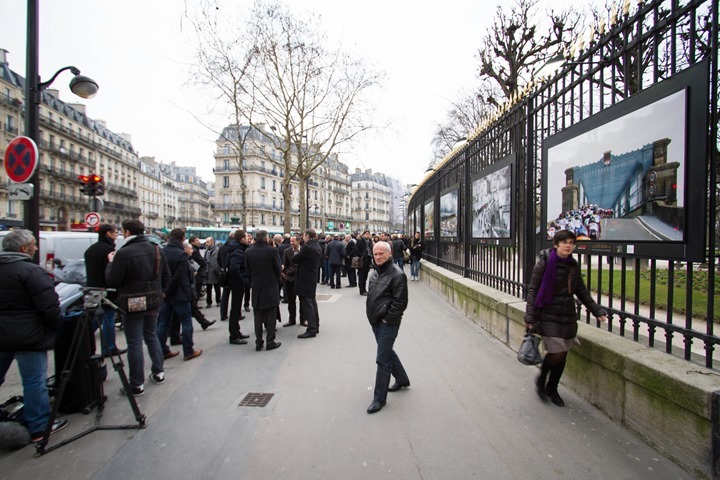 I suppose a bunch of cameras and reporters and photographers kinda gave it away. Along with celebrities that I don’t recognize, but am probably supposed to recognize. 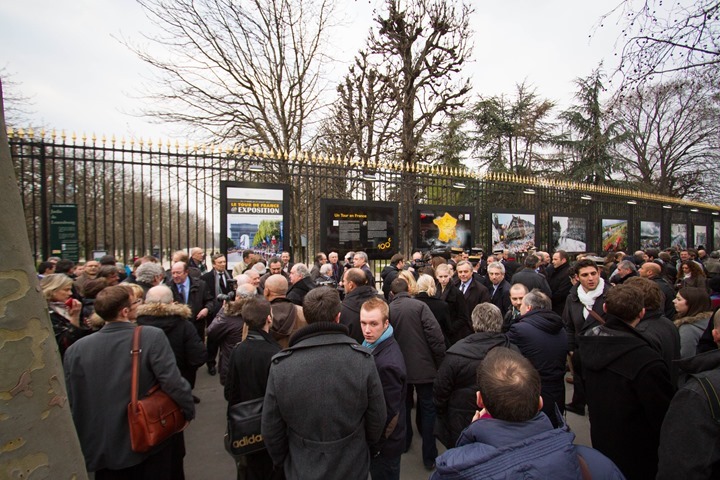 While heading up there, I had figured the gallery was inside one of the buildings that sits on the park. Turns out though, the TdF gallery was actually on the walls of the fencing that surrounds the park. Over the course of the winter we had seen other bits of art displayed there, as it forms a bit of an outdoor gallery.

I determined that said swarm of folks was there for the press conference which was apparently running late. And as exciting as hearing a press conference in French sounded, I just decided to set off on my own to check it all out. After all, it was open park area. Well, actually, technically outside the park – which is even more open.

The display started with a brief overview of the history of the event. 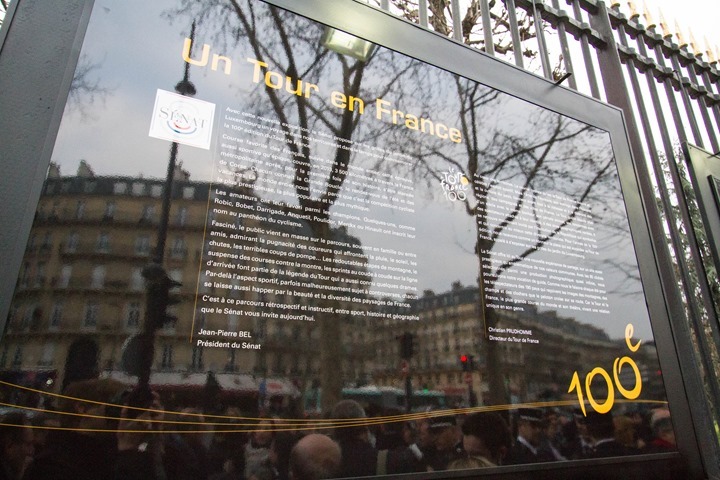 The next photo was an overview of the 2013 route. This year marks the 100th anniversary of the Tour de France. 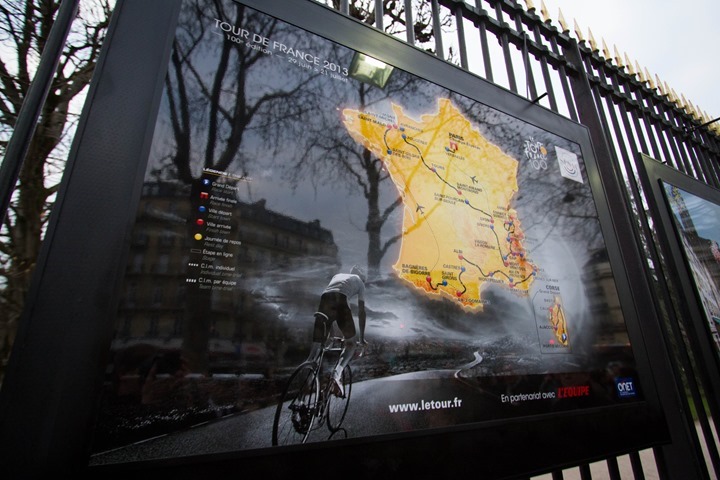 From there it was on to the photos!

While I’d like to say there was some order to them, best I can tell – there was no order to the 80 photos on display. Like someone had put them in a can, shaken, and put them up on the wall. Variety is the spice of life. 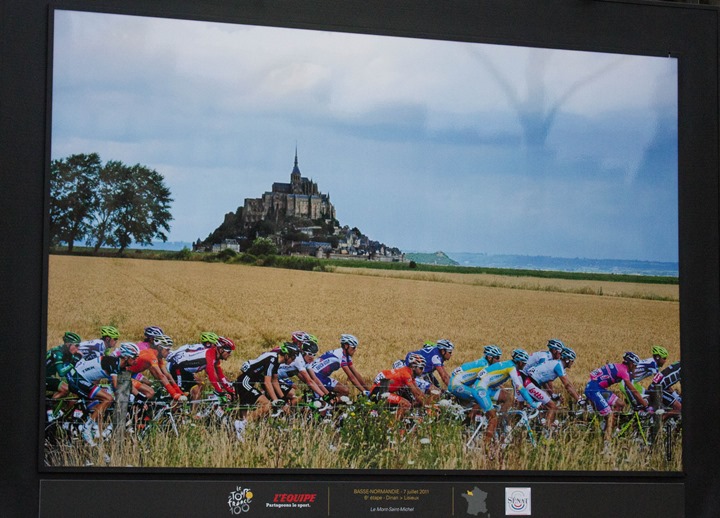 Below each photo was a small snippet of text noting the place, date, and stage start and end points. 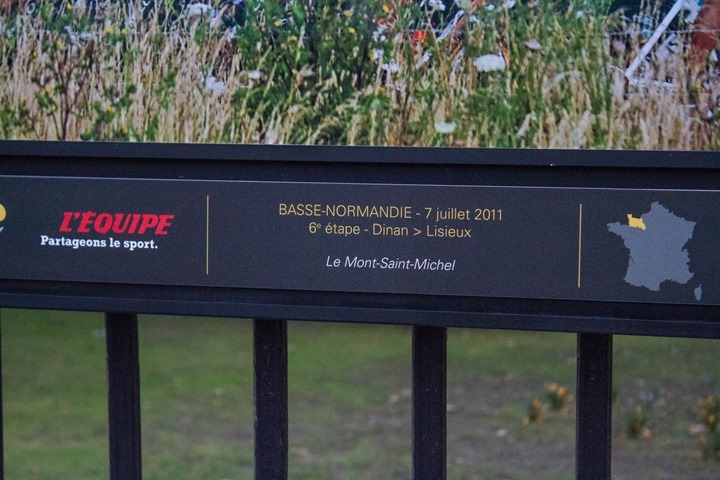 Additionally, since the event is sponsored by L’Equipe (French sports newspaper), there was a logo for them on the frame as well.

The photos ranged in date, staring with the 1920’s: 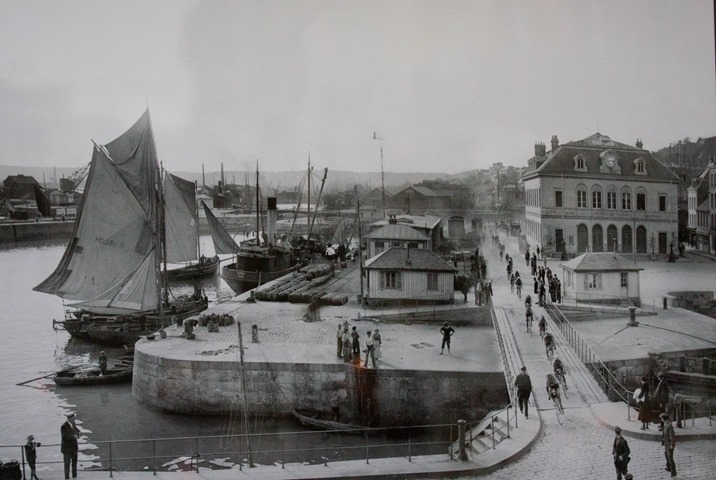 While looking at the below photo, I realized that it looked astoundingly like riding a bike in India does today, given the quantity of cows on the roadway mixing it up with cars and bikes. 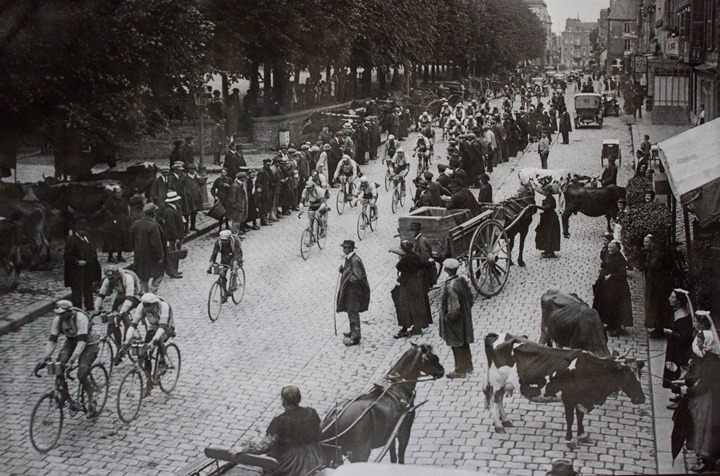 Aerodynamically fit in a wind-tunnel, these riders were not: 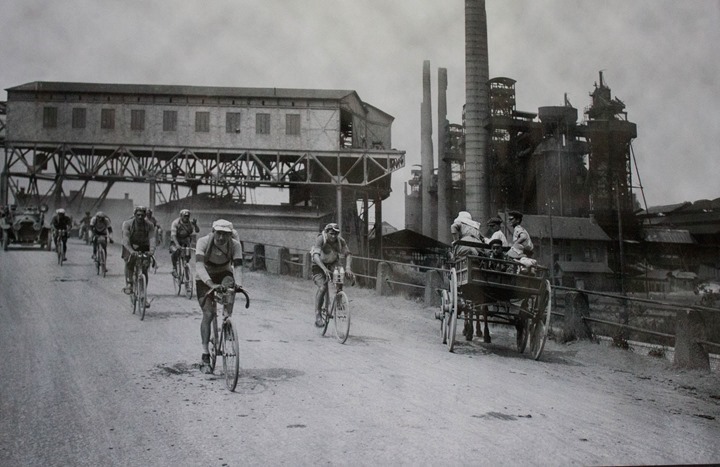 And I don’t think the riders got off their bikes and onto the team horse-pulled wagons this year, despite the snow and mud: 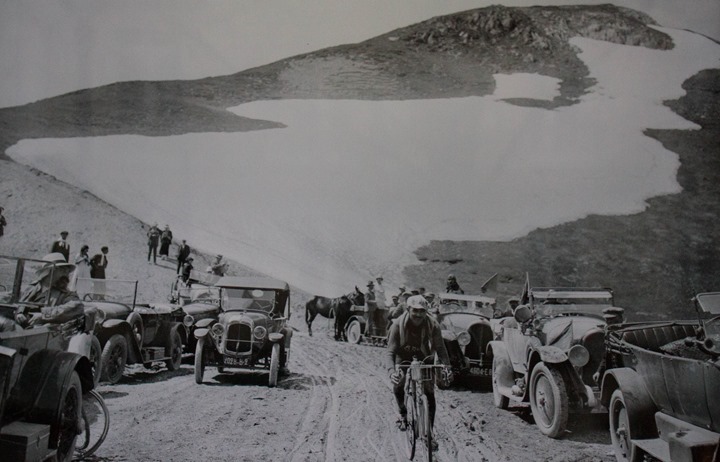 At the other end of the date spectrum, were photos from just the last year or two: 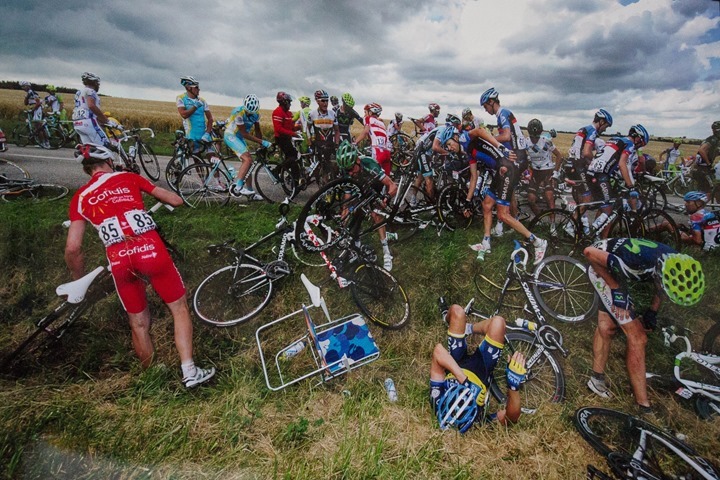 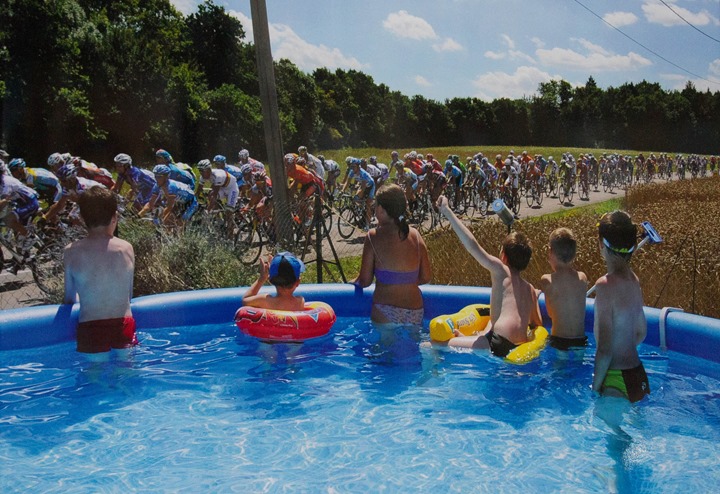 Now, I did observe a few interesting things while photo gazing. First up, there were only perhaps 5-7 photos out of the entire set where a single rider was identifiable. In virtually all those cases but one or two, the rider was from well outside the last 10-15 years. I’d have to believe this was on purpose.

I suspect that over the next 3-4 months that this is on display (until the end of July), that it’s likely further doping allegations will surface on more riders. Given that, it would be less than ideal to have said rider pictured on the fence. In fact, that’s probably why nobody at all recent was pictured individually. I suppose the number of recent riders that didn’t dope and are still recognizable is fairly small.

No matter the reason, it was too bad, because photos like the below were generally much more interesting than another photo of the peloton going across the field. They tell the stories of individual riders, rather than a mass of people. 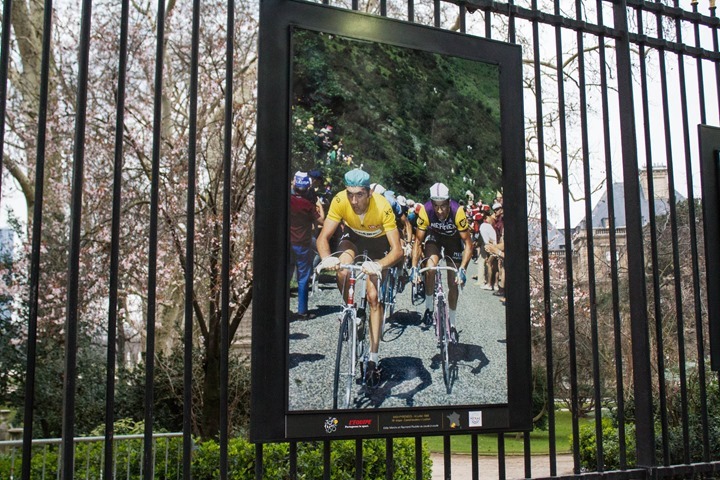 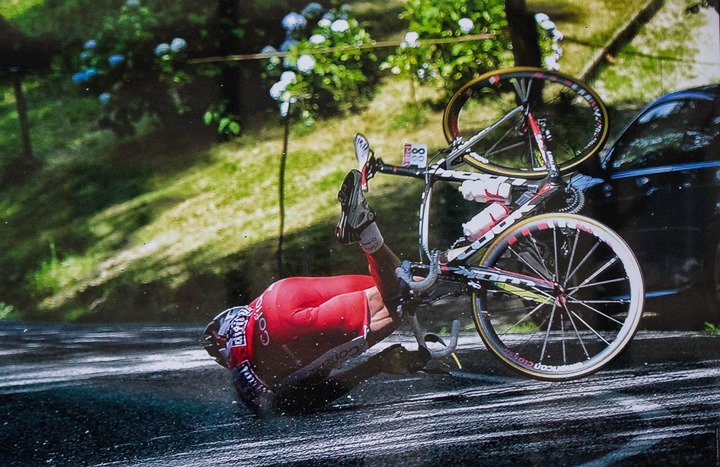 The vast majority of the photos were of the peloton, or distant shots: 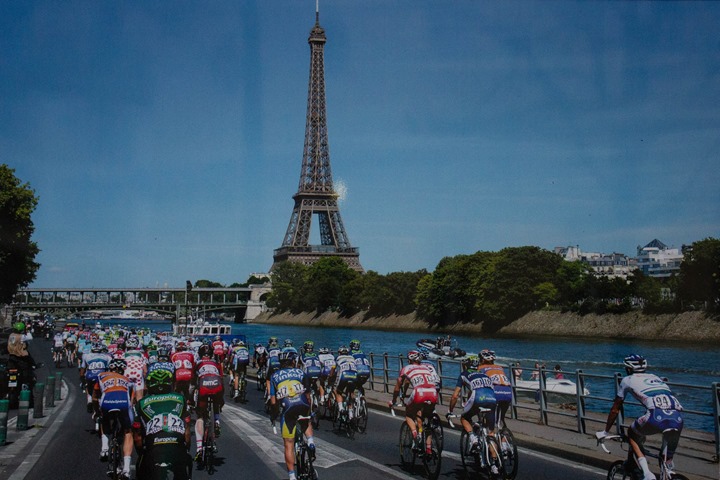 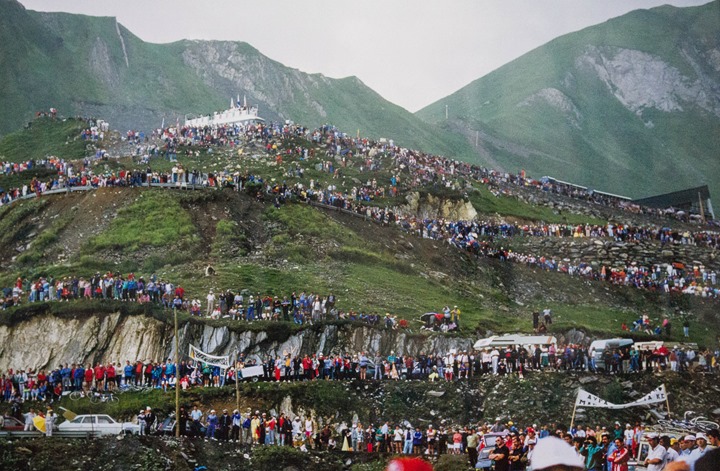 Another pattern I noticed was that while there was very good coverage of the 1920’s, and good coverage of 2005ish to 2012ish, there were only a handful of photos of the 80’s and 90’s, and maybe one photo between 1940 and 1980. Apparently people didn’t cycle during those times.

Maybe this has to do with the partnership, or some other aspect. I just found it noteworthy.

Another interesting way that the partnership manifested itself is that since all the photos were taken by L’Equipe, you didn’t quite see as much photographic variation as I’d have expected. Perhaps we live in a spoiled age where every day at the end of the Tour (or just about any pro race) I can glance through incredible galleries from a number of different sites. Those sites in turn offer differing perspectives. And possibly in that sense, they offer an overall better set of photographs. Said more bluntly – while there were no doubt some cool photos (most of which I shared), but I felt like I’ve seen many better photos from independent sources over even just the last week’s worth of races – than I saw on the fence from 100 years worth of events.

Later last night, The Girl and I did our run around it, and she generally agreed. Maybe it’s the critic or reviewer in me coming out – but for something as cool as the 100th anniversary, I’d expected to see more iconic photos, or ones where I just went “Wow!”. 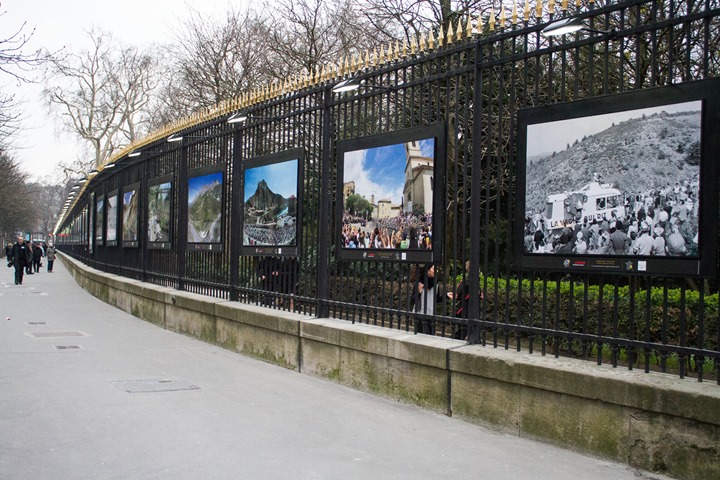 As is always the case at the gallery, it’s fun to watch people looking at photos: 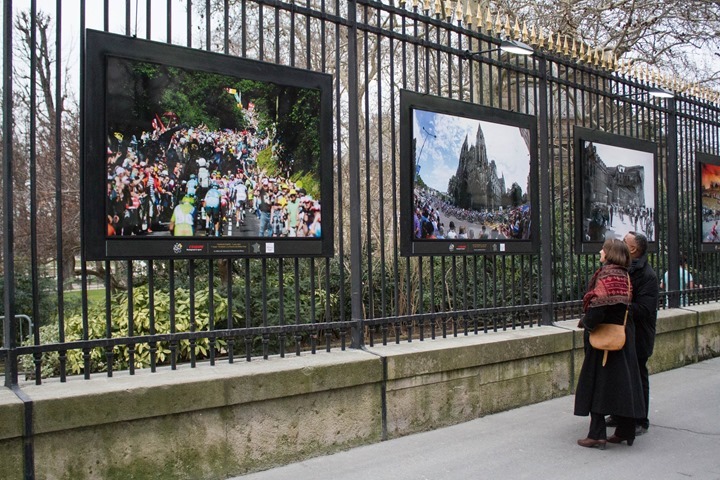 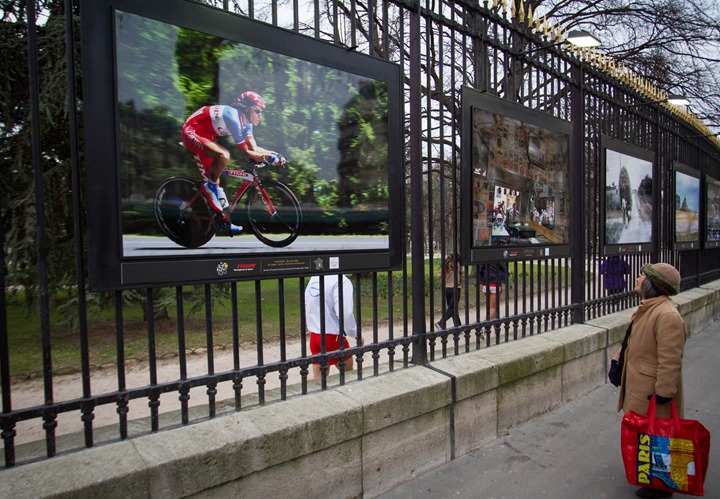 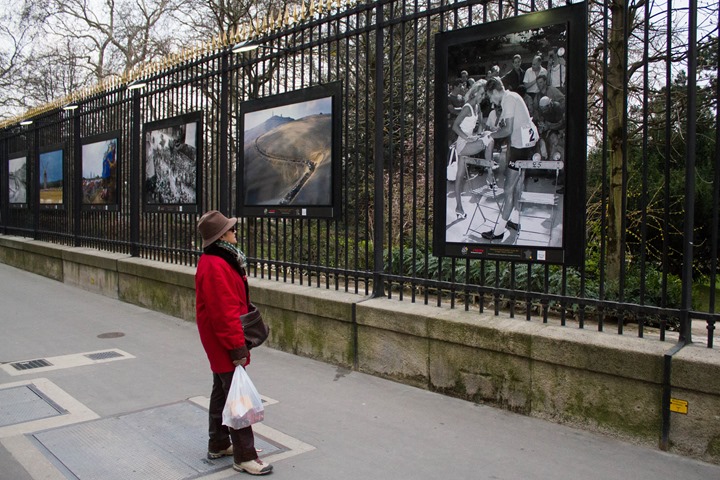 Even a number of cyclists were stopping to check it out: 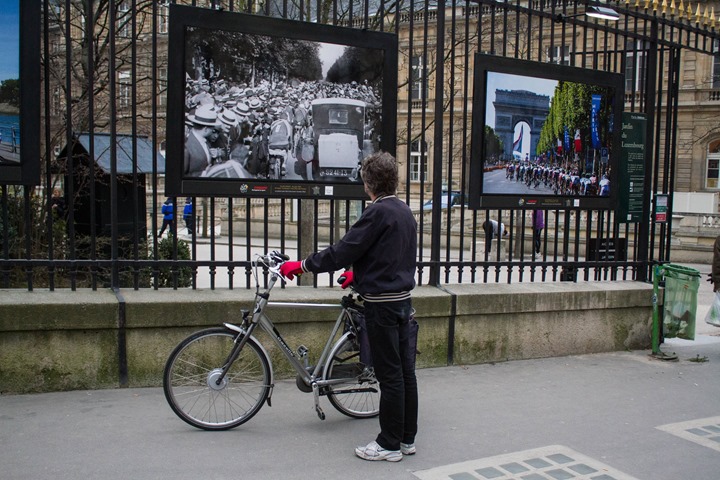 So if you’re in Paris before the end of July, swing on up to check it out. Mostly because you should check out the Luxembourg Gardens, but then since you’re there, check out the Tour de France gallery wall. And, it’s equally as cool at day or at night – as the photos are all individually lit. 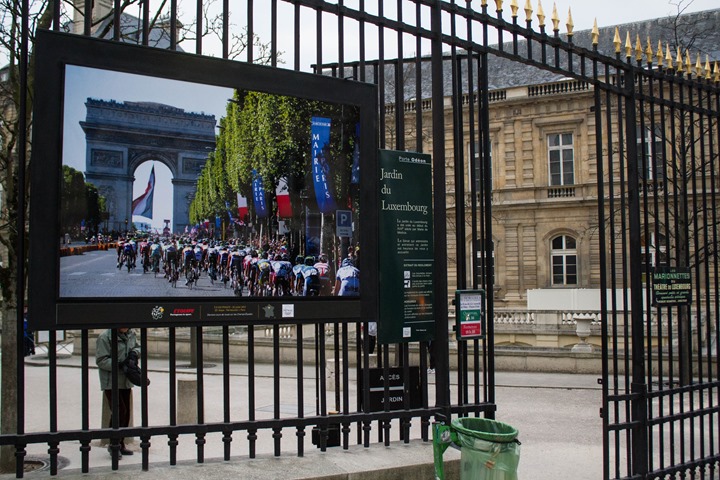