What it takes to build complex sport technology products from nothing 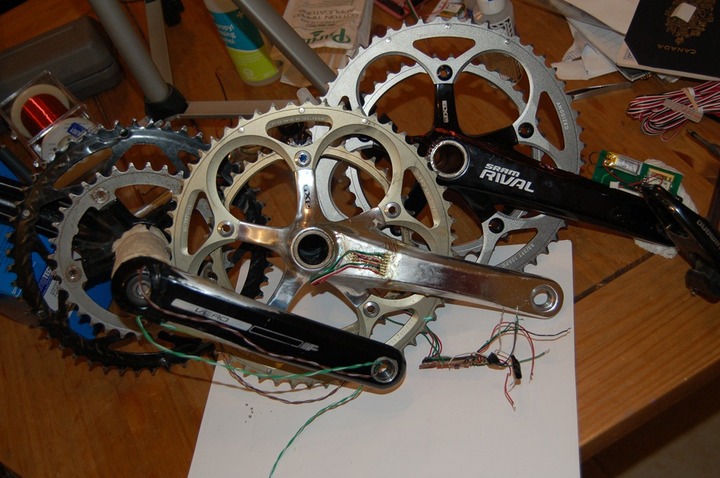 A number of months ago there was some initial hype around an individual (Keith Wakeham) that’s building a power meter and documenting the progress in weekly blog posts (though lately more frequent).  The current prototypes of his power meter are focused on measuring left/right power within the crank itself.  Ironically, he noted in some very early posts way back last summer that he actually had applied to work at Quarq.  He just unveiled the name of the company – Accuity – in a recent post.

While the project has merit, what I think is almost more interesting is actually to see a product slowly being put together bit by bit.  Not only the weekly progress, but the decisions that have to be made along the way are being highlighted.  And there’s a lot of decisions to be made.  From technical hardware decisions like chipsets, to software decisions to licensing decisions to fluffy things like markets and target audiences.  And that’s just the decision making – which has nothing to do with the actual hands-on designing/engineering, testing, troubleshooting, manufacturing, selling or supporting.

For example, in his most recent post he notes the decisions around ANT+ versus Bluetooth Smart, which I thought was interesting in terms of the detail he listed:

“While I might pick up a BTLE sensor tag from TI [Texas Instruments], I have no ambition to pursue BTLE at this time. Cost mainly. ANT+ will require FCC + $1500 membership + $750 device registration / testing. BTLE requires $22500. I am not joking. I became a BTLE adopter and I can barely understand the documentation and only have the vaguest ideas how it works compared with ANT+. Right now that’s a learning curve I am not willing to accept. If Accuity gets off the ground, has people test some prototypes, then I’ll reconsider.”

I don’t have enough clarity to both sides of the camp to be able to state with 100% certainty that the above is accurate, as I know there have been some changes around Bluetooth Smart lately.  The one thing I’ve learned with talking to both organizations and companies working with them is that there are many loops and holes where one can dive through.  But, it’s the landscape that hobbyists turned entrepreneurs and eventually turned product-selling business face.  Of course, this is true of any industry.

For those interested in my commentary on the above scenario (which is probably about three of you, including Keith) – is that the answer to which protocol question is: ‘Both.’  The way to go is the dual Bluetooth Smart and ANT+ implementation like Stages have done with their Stages Power Meter.  This is effectively covering both bases, and gives them (and by extension, end users) complete flexibility when it comes to head units.  Folks can go traditional ANT+ like a Garmin/CycleOps/Timex head unit, or they can go cell-phone based apps that support the specification.  I really think that any company that’s developing power meters for introduction into the market beyond this summer and isn’t doing this, is already putting themselves behind in the game.  There are some dual-chipset challenges today with this area companies are waiting on, in theory these are planned to be resolved in Q2 CY2013, however, I have low confidence in those dates being hit at this point (they’ve been continually delayed).  This delay is impacting many companies today and their ability to get dual-protocol products out (actually, it’s impacting almost every company I talk to lately).

One of things I talked about in yesterday’s podcast with the IMTalk folks is that it’s not about getting solutions like Keith’s to 95%.  Getting to that point is – all things considered – the easy part.  The challenging part is getting that last 5% to work, and more importantly, to work consistently.  It’s this last 5% (or even 1-2%) that challenges even the biggest companies.  Garmin’s Vector being probably the most perfect example of that.  In some cases, that last 1-2% may be in the form of software related issues (for example, where I saw the Stages PM in the January timeframe), and for others, it may be in the form of manufacturing focused issues (for example, where Garmin’s Vector’s issues primarily sit).  Even then, upon release companies in the power meter field still have issues.  Take Polar, they recalled all their units last spring.  While they only had a small number of units out in consumers hands, they were nonetheless recalled to get updated. (Preemptive ‘Where is Vector’ question, most recent answer can be found here.)

Of course, over time most of these technical and production challenges can be solved.  But the timeframe to solve them can literally take years.  In talking with Keith, he’s been poking at it on and off for a few years (he opened the doors on his prototype work late last summer).  Most PM companies spend about 2-3 years working on designs and prototypes until the point of an actual production unit in consumers hands that someone paid for.  This is the major reason I generally recommend folks not wait for whatever new-fangled power meter that’s “almost on the market”.  There’s a lot of new-fangled power meters that are in perpetual almost on the market state.

Along the same line as what Keith is doing with his power meter, another man out of the UK is doing on the erg trainer front (resistance controlled trainer).

His goal is to develop a £50 resistance controlled component (electric) that can attach to an existing trainer (i.e. perhaps attached to a $100 trainer), allowing one to control the resistance of the trainer remotely.  Just like a CompuTrainer, except about $1,600 cheaper.   This is pretty cool in that even the cheapest units in this realm start at about $800-$900 these days.

Now his approach is a bit more homebrew than Keith’s power meter approach.  Both have end-states as opensource in terms of guidance, but the trainer will realistically be the only one that the average Joe can probably put together.

In fact, you see below the use of remote control airplane servos as part of the control unit.  I expect in time you’ll probably see more polish around the implementation.  Like most engineering implementations, things start off looking a bit backwater before they move up to 5th Avenue polish levels.  But that’s what makes DIY cool. 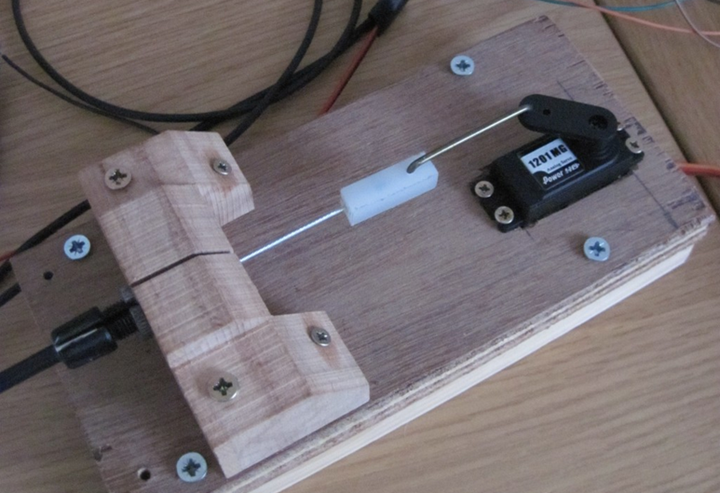 Like the power meter blog, the trainer blog is updated weekly with tidbits of his journey along the way.  In it are tidbits of the design choices he’s made.  Unlike the power meter blog, his goal isn’t to produce a sellable finished product, but rather something you can cobble together yourself.  Thus, some of his design aspects are more homely than Keith’s.  Take for example this section:

“It soon became clear that sweating over my laptop or dev board, trying to press buttons while training was going to end badly, so I needed a way to more easily enter lap markers and manually change gradient while on the bike.  A rummage through the drawer of “things that may come in useful one day” turned up a spare remote from an old fan heater, which was quickly hacked up to provide a wired remote for some up/down, lap, and stop buttons.”

Yup, a fan heater.  But, again, that’s what’s cool about DIY – pulling together the pieces.  In time I suspect that fan heater remote control will end up being something slightly more repeatable that’s easily bought.  For example, Part Number 123ABC off of RadioShack.com or Amazon that provides similar functionality for a couple dollars and doesn’t require you taking apart your household appliances.  Mostly because I know The Girl would kill me if I tried to take apart our heater to build something for a trainer.  Actually, just another trainer alone would probably get me in a similar end-state.

The point of this post was twofold.  One, for all the geeks out there that find this interesting, and two, to give a better understanding of where companies really start out from in the sports tech world.  Over the next month or two I’ll also be visiting some companies at the opposite end of this segment, and will show you how they’re building products.  From design to engineering to testing and support.  The same product development cycles exist in companies large and small, it’s just some use a spare heater controller, and others have dedicated injection mold facilities in China and Taiwan to spit out anything a computer can render.