It’s been about a month since the sorta-annual DC Rainmaker survey opened up.

And quite frankly, I was BLOWN AWAY by the response this year.  3,143 of you finished the survey.  And as I promised, I’m going to give you a look into some of the results.  Not everything of course, because the PDF is some 418 pages long.  That’s like…well….my average product review length.

So, who are you all?  Here’s the make-up of readers today: 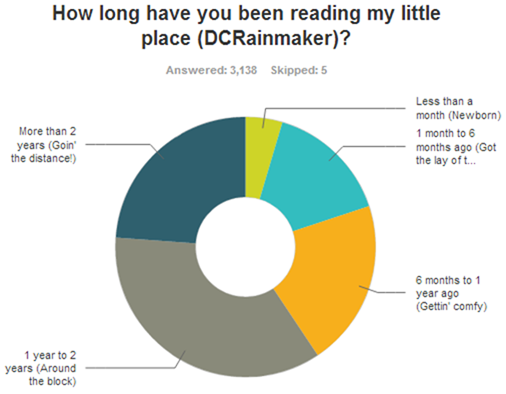 The vast majority of you (68%) found the site via search engine, with the next biggest category being via other blogs or forums (18%).  Beyond that, it was a mix of social media or directly from friends.  And everyone else probably heard about it from my Grandpa.

When I looked at content type and mixture (in other words, product review posts vs sport how-to, vs sport tech, vs Ray Randomness vs Paris Blog, etc..), the majority of you found both the enjoyment of each type, and the balance between them to be about right.   There were 8 people who didn’t enjoy product reviews.   There was a solid contingent of folks that did want more frequent product reviews (the exact term being “A Lot More!”).  Approximately 19% of you wanted ‘slightly less’ Paris Blog posts.  Though, I only seem to post on that about once a week (if that).  So perhaps that’s fulfilling things.  85% of you in general though found that the post length was “Just right today!”.

When I look at increasing/decreasing content types, it’s very difficult for me to scale to more than one product review per week.  In fact, even hitting one product review a week is rather difficult.  Certain products take far more time than others.  For example, cycling trainers and multi-sport watches tend to be the most difficult to put together due to the high level of complexity and shear number of features.  Whereas running watches are relatively straight forward for me (plus, it helps that I run quite a bit more than the other sports right now).

I was surprised to see that only 24% of you knew about the deal I have with Clever Training (where you get 10% off anything they sell including virtually every device/trainer/thing I review, and shipping is free over $75US).  In doing so, you support the site in a big way.  Same goes for Amazon (I prefer you buy diamond rings through them, or at least the box of laundry fluffy sheet things).

I asked what the blocker was for those that were aware, but weren’t using the deal (Clever Training).  The biggest by far was for international folks, which face import duties (trust me, I hear ya with me at 19.6% into France!), as well as shipping costs.  I think the shipping costs work out for most items that folks are trying to import (i.e. more expensive ones).  That said, Clever largely does have flat rate shipping, but I’m working with them on more ideas for international folks to make it more appealing.  I do hear however good things from international buyers (particularly those in Australia with crazy messed up local pricing).  And on the rare occasion there’s a blip, I think Clever has done a solid job in overcompensating on ‘making it right’.

When I asked what would motivate more of you to support the site via that avenue, and nearly 800 of you gave written responses – which are hugely valuable.  The vast majority fall into the bucket of more specifics around flat-rate international shipping for all DCR readers, and around a ‘Deal of the week’.  I’m working with Clever Training on both.  Deal of the week is definitely a biggie, though there are some delicate issues there.

On giveaways, 5.6% of you said to get rid of them.  The remaining asked for them to stay, with 90.6% of you asking for either more giveaways, or that the roughly monthly giveaway allotment was spot-on.

Looking at guest posts, I prefaced that finding time to post in-depth content on a daily basis is challenging while working a full-time job.  At the same time, I’m also a bit of a stickler in that any guest post content I do post must be of the same quality bar (be it technically, photographically, or just humor-wise).  Wait, I am funny, right?

Some 81% of you said you’d like to see more guest posts.  Within that 433 of you offered comments on what type of guest posts you’d like to see.  And a small number of you volunteered your services.  Some of you wanted to see more occasional posts written by The Girl (like this one she did last fall on the gear she uses).  The other content types requested largely centered on secondary reviewer opinions on products (either via a small section in a larger review, or just a different product reviewer).  Very few people wanted to see other folks race reports, which I generally agree with (there are exceptions of course, such as when some friends borrowed my turkey costume for a race).

The biggest area that you thought was solid ground for guest posts was ‘Behind the scenes’, likely from technology companies.  I’ve got some ideas coming up in the next few months with some upcoming visits with various tech companies in this space that might help in this area a bit more. 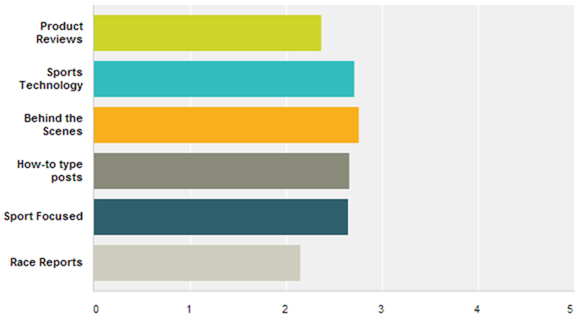 Obviously, I’m somewhat protective of diluting any content here with content that I don’t think you’d find value in (which is defined differently by different folks), so this will likely be a pretty slow-roll if/when it does happen.

This last section covered areas around new ideas, or new directions the blog could go in.  This survey required essay style written answers, which 1,172 of you wrote out detailed thoughts.

At this point, as I look at the products on my plate, I will continue to keep that sports technology focus.  Like I have over the past few years, I think the larger fitness (encompassing both endurance sports and connected devices like scales and Fitbit-style stuff) is really where I’ll spend most of my time.  There’s plenty of products in this area.  A number of you asked about sports camera/video gear reviews.  For me, while I have a good grasp of much in the photography realm, I don’t really go that deep on a lot of it.  Plus, virtually any of those major cameras related to sport are well covered elsewhere.  Where you can expect to perhaps see me poke into that area is accessories for sport cameras that personally interest me, or for scenarios that I don’t see coverage for.  For example, last week you saw me talk a little bit about an iPhone action-camera case that I used skiing with my brother.  I’ll be toying around with it next week in Perth.  Same goes for cheap alternatives for doing DIY pool analysis (for stroke recording).  That sorta thing.

I don’t expect to see any branching into nutrition or clothing at this point.  Honestly, it just doesn’t interest me.  And I find both to be highly personal to each persons unique requirements.  Just my two cents.

Next up, forums.  This is an area I’ve long poked at the idea of (though, sorta like a kid poking at broccoli).  I think there’s definitely a hole in what’s out there today around sports technology.  But, you were just as mixed as I am:

Based on that, I’m largely going to keep things as they are today.  As many of you pointed out in the written responses to this question – forums generally are an administrative headache.  And at the present, I realistically don’t have time to dedicate to it.  Perhaps down the road things will change, but not today.

Whether or not to do a phone app was much the same way.  I’m generally not for it at the moment, since I’m not seeing the value it can bring (either to you or me).  And 75% of you agreed with me.  The remainder channeled the one idea I was toying with, which is a bit of a consolidated review app.  Something that would pull in all the pertinent details around products in a given category and make it easy to make in-store purchases.  Given the new product comparison calculator I rolled out back in November with the site re-design, I think this is largely accomplished there.  It’s funny, this is almost an identical percentage to what folks said during the last survey.

Finally, a training camp of sorts.  My rough vision for this would be a blend between a traditional training camp where there’s expects in the field on various topics (i.e. swim/bike/run/nutrition), but also fused with the technology aspect in having the major companies (or minor) be present too.  Allowing you to do a bit of a demo-day on equipment or tech gear.  If you wanted to take out the latest Garmin/Polar/Timex watch for your two hour run, you could do that.  My goal in something like this would be to have the best of the best when it came to people presenting at the camp.  I know many of those folks, and the rest I believe I can successfully blackmail.

Your feedback ended up being a difficult question to measure statistically, since most of you pointed out that it highly depended on where it was.  In retrospect I should have broken this out into two questions – one for US folks, and one for everyone else.  That said, some 215 of you said you’d sign-up immediately, and another 900 of you said you’d consider it, with location being a key deciding factor.  In my head, I would likely probably try and focus on a US camp first, simply to reduce initial issues with language for me as a planner.

Obviously the key to making this work is a complex blend of venue, the right people there, and the right opportunities for you.  Many of you offered help in this area, and it’s something I’m continuing to ponder.

Finally, at the end of the survey I had an ‘open-mic’ for you to note anything else you’d like to.  About 1/3rd of you took the opportunity to do so.  It’s here in this section that I got the most value out of the survey, and where I genuinely appreciated everything that everyone took the time to write out.  You’re all awesome!

There were many concrete  suggestions in there too, some of which I’ve already started to implement.  For example, some of you asked for a roundup of Kickstarter-style projects in the Week in Review.  I’ve been doing that the last few weeks as things were relevant (not every week is there something relevant).  I’m going to keep chipping away at the suggestions as I can.

As many of you also commented/noted, time is truly my single biggest limiter.  As I work and travel pretty heavily, fitting it all in is tough.  And usually, when you see things a bit quieter around here, it’s largely because other aspects of life (work/training/etc…) have moved the scales a bit.  So anything I do here time-wise I want to ensure that you get the biggest bang for the buck on.

But again, a HUGE thank you to everyone who filled out the survey!

And thanks for reading!

(Oh, P.S. – here was the results from the last survey I did)