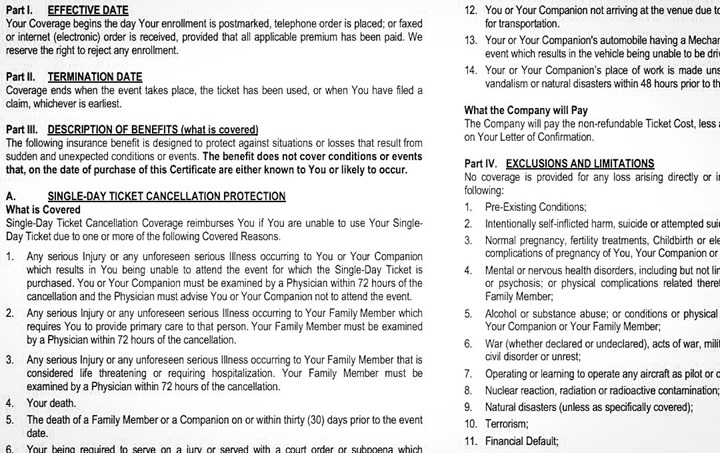 Late last week, Active.com announced a new option that will follow along with all the magazines, extra pasta dinner tickets, and random other junk that they offer you at the end of the race registration process.

The new offering allows you to get a complete and full refund on your registration fees should you need to cancel for the most common reasons, which they cite as “injury, illness, job loss, transportation delays, military/family/legal obligations”.  Looking at the actual legal document, it also covers you in most situations if one of those impacts your significant other instead of you.  Officially this whole thing is called the “Registration Protector” – like some comic book super-hero.

Now what’s interesting is that quite frankly, the whole thing seems incredibly cheap.  Sure, for a local 5K running event, you’re probably not going to pay $7 on top of the $35 – as the timelines probably place you closer to the event in question.

But if you shift your focus to a $675 Ironman branded event – the $7 is cheaper than Active.com’s fees (which are on top of that $675), and the insurance cost is basically equivalent to three gel packets.  For me, I’ve never had to cancel a major event in my race schedule.  The closest I came to cancellation was due to injury after I got hit by the car in another race – but I was well enough to compete by time the next race occurred.  But with most triathlons costing at least $125+ these days for distance equal or larger to an Oly tri, I’d easily pay the extra for piece of mind.

Now there are some notable restrictions here.  Like missing school, you’ve gotta provide a teachers note.  In this case, a doctors note that you are indeed unable to compete in the event physically (interestingly, mental illness is not included).  With the case of a doctors note, I can’t imagine that’d be terribly difficult (a note for physical injury).  Heck, just about any non-sports doctor is going to be more than happy to write a note telling you it’s a bad idea to swim 2.4 miles, bike 112 miles, and then a marathon.  You could likely get that note without any injuries.

The whole reimbursement process is being stated as 30 days.  This doesn’t however cover any of the additional typical race aspects – such as travel costs (hotel/airfare), or anything else around items bought for the race.  Additionally, they do have a rather lengthy list of circumstances (full PDF policy there) not covered by the policy:

Some of these aren’t likely of significant concern to most.  For the most part, I typically don’t run into issues with nuclear reaction, or radioactive contamination.  And I’m usually able to avoid most pandemic’s.  Pollutant release is debatable.  Especially after beans.  Lots of beans.

But there are some catches that are notable:

1. Pre-Existing Conditions
3. Normal pregnancy
9. Natural disasters (unless as specifically covered);
16. The event being cancelled or delayed by the venue or promoter for any reason (including bad
weather) unless as covered herein

Obviously pregnancy isn’t an issue for me, but I know some woman that aren’t sure about registering for events next season due to potential (or existing) pregnancy.  So this doesn’t help you there.

Then there’s that funny little weather clause.  In cases like the NYC Marathon, you would have gotten nothing back via this policy.  Though to be fair, there really aren’t all that many cancellations out there in the endurance sport world due to natural disasters (I can only think of about three in the past 12 months within the US, though there may be more).

Then there’s that pre-existing conditions item.  For most folks looking at an Ironman, you’re likely registering a year out.  And for most half-iron distance races, you’re talking at least 4-8 out months in most cases.  So pre-existing conditions are likely less of a concern with those timelines in having an injury that’s not yet healed in time.  Where they become an issue is with folks that may re-injure themselves in the same area ahead of the goal race.  It’s unclear how they will handle this.  Will they consider it pre-existing, or a new injury?

Only time will tell.  And the same goes with how well they handle claims.  Ultimately it will come down to the underwriter (linked to above) and the insurance company behind it (Allianz).  For most of us, when it comes to claims insurance companies are either a pain in the ass, or fairly functional – there tends to be little in between.  When I look back at my bike vs car insurance claim post (What I learned about getting hit by a car), the replacement aspect was fairly clean and straight forward.  I can’t fault them too much there.  Clearly a different insurance company, but a random data point nonetheless.

Obviously Active.com is far from the pinnacle of awesomeness in most athletes minds.  But I’m willing to give them a shot next time I use them to register for an event, if they offer the $7 deal.  Playing around with a few half-iron events, I wasn’t getting the offering.

I’d be curious though what your thoughts are on it.  Good deal, bad deal, or scam?  As always, thanks for reading!

(P.S. – Some of you may remember the last time I looked at an endurance sports related insurance offering, here’s that post).