Back a few weeks ago a USAT e-mail was sent out to the majority of members promoting a new bike insurance program from a company called CyclePro.  The e-mail highlighting the program basically explained at a high level that it would protect your bike (and thus, your wallet) against damage, theft and pretty much all sorts of other badness that might occur to your bike.  Here’s a brief screen clip from that e-mail: 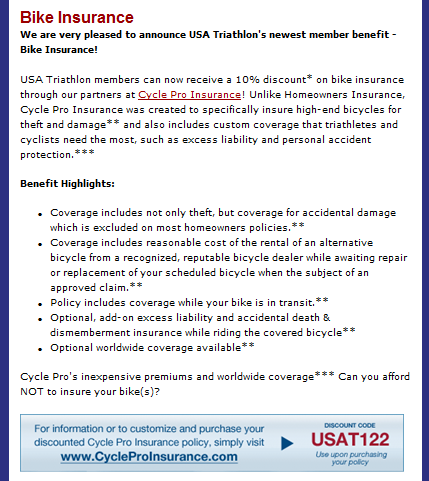 As one who travels regularly with my bike, as well as one who has had a bike destroyed by a car – I was curious what this program actually entailed.  If for nothing else than the piece of mind that I could pay some premium to ensure that the significant investment I put into the bike isn’t in jeopardy every time I ride it down the street.

So last week I followed the links to check it out.  Using their site is pretty easy – it only takes about 20 seconds to fill out the estimate form, which the pops back a cost estimate number instantly.  I used my race bike and did some quick napkin math as to what it actually would cost to replace:

All in we’re talking $5,400 roughly.  I’m sure if I were to overanalyze things like my water bottle cages and the like it would be a bit more – but the items above are the big three.  A few seconds after entering it all in the form (along with the 10% USAT discount) I get back this: 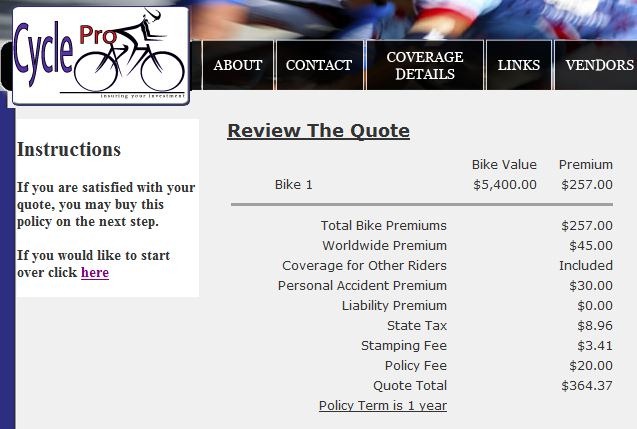 In looking at it I was pretty surprised initially as to the cost/expense.  I insure a bunch of high end camera equipment and underwater camera equipment with roughly the same value – but at a third of the insurance cost.

Out of curiosity I go ahead and try reducing the bike cost – to see the impact on the annual premium. This time I just go with the lowest option you can choose – $3,100, and get back this: 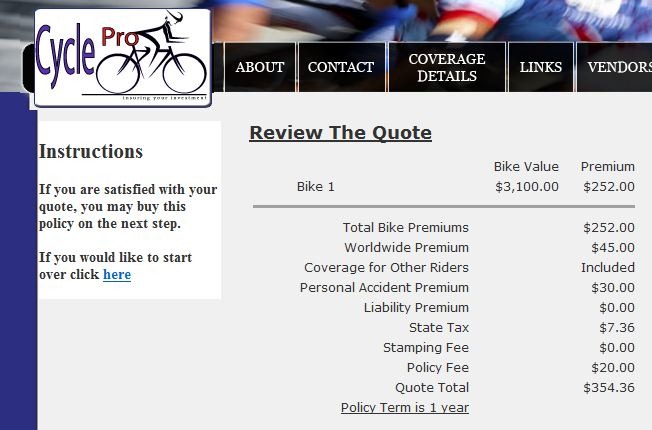 As you can see – the change is nominal, all of about $10.  Clearly, I might as well cover everything.  I additionally went through the test of removing ‘worldwide premium’, which basically means if I’m out of the country they won’t cover my anymore.  But at $45.00 – that seems like a cheap option for the coverage since I do go out of the country with my bike.  You can see it itemized above.

Thus all in I’m looking at about $365 a year for the coverage – which something I’d have to renew each year.  On face value that seems expensive, but if I look at the cost of replacing a totally trashed or stolen bike – I suppose it’s not too bad.  Unfortunately nobody ever said cycling or triathlon is a cheap sport.

The next thing I do is start browsing through the detailed policy.  After all – I wanted to validate there weren’t any massive loopholes that got them out of paying should something occur to my bike.  The coverage is basically broken down into three areas: Theft, damage and liability.  Most of us are concerned with the first two.  The third – while interesting, isn’t of primary concern to me…so I’m ignoring it for the purpose of this post.

First up – theft.  What would happen if my bike were stolen?

Well, the answer turns out to be incredibly complex.  First is the question of where it was stolen.  The policy delineates between an insured location (your home) and the non-primary insured location.  First let’s assume it’s stolen in your home.  All of the following are not covered: 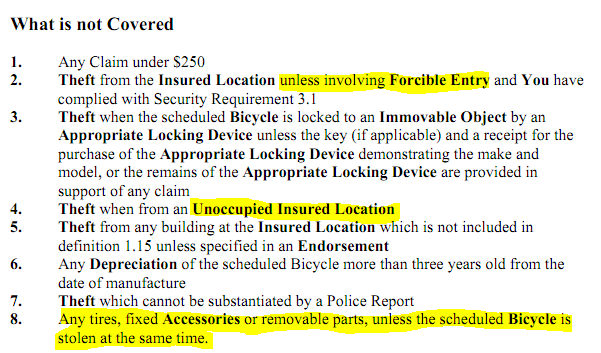 The policy wording has you jumping around constantly between the different sections figuring what each referenced section means.  Above for example, it points you to 3.1 – which states…well..actually nothing.  That section (3.1) simply tells you to turn to section 1.15.  But 1.15 is actually incorrect – it really means to point you to 1.14.  1.15 covers loss of limbs, whereas 1.14 covers locking requirements.  I suppose from a legal standpoint this helps you the buyer – since this policy would likely get shredded in court by a good lawyer if it came to that.

Then we have the issue of ‘unoccupied’.  If you do a bit more searching in the wording – that term actually means a place of residence where you haven’t been home in 30 days.  While I can’t argue with the wording here, I fear that this leads to a more general issue around wording and that when it comes time to make a claim, they’ll try to bait and switch the words on you and say that you simply weren’t home.

Then we have the last piece – “Any tires, fixed accessories, or removable parts…” are not covered unless the entire bike is stolen.  While I’d grant you that in most cases they’re going to take the whole bike – I could see scenarios where they don’t.  And my tires and power meter are basically worth more than my bike, thus cause for concern.  Further, they don’t ever define the term ‘removable’.  Have they ever built a bike?  Everything is removable.  Everything.  It’s just a matter of how much time you have.

But don’t worry…I’m not even close to the good parts of the policy.

Let’s move onto theft from an uninsured location – i.e. a hotel room at a race.  Here’s what they have to say there: 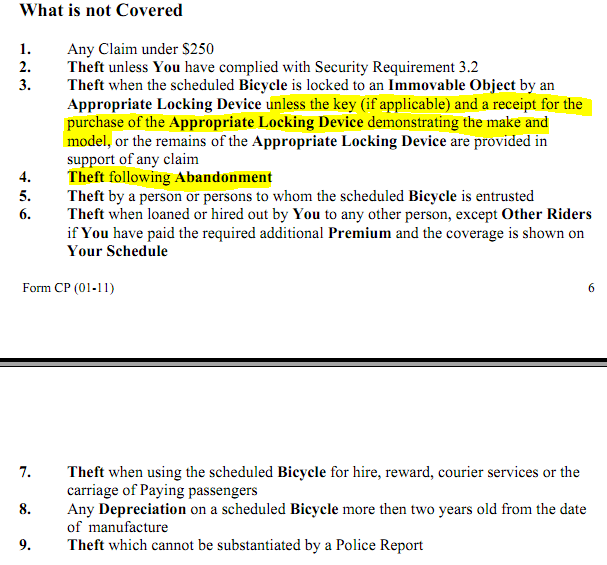 You see very similar language to the insured location component.  Except this time they also add in abandonment.  Abandonment is defined per the following:

So while transition area is covered, your hotel room is not since it’s not the “insured location”.  In other words, if you leave your hotel room for more than 12 hours and your bike gets stolen – you’re out of luck.  (Note, the above says that if it’s in a “transition area” you’re good up to 48 hours.)

Let’s move onto another section covering theft from a car – which is actually one of the more common ways a bike gets stolen.  They’ve got basically the same provisions as above, plus an extra set as well. Check these out: 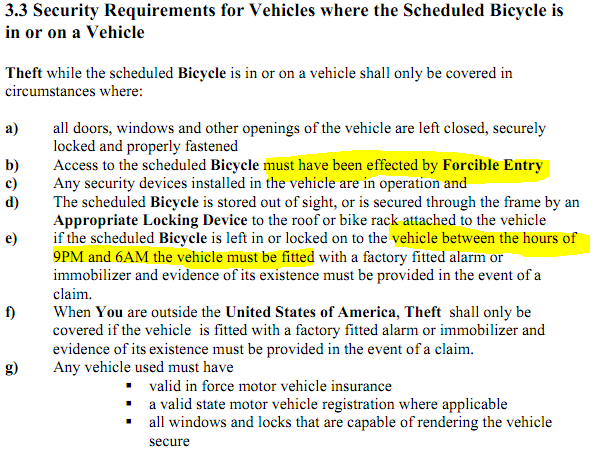 Nothing here is too big of a deal, as most cars have alarms on them, but if not you might want to be aware of that 9PM to 6AM provision.  My primary worry here is about the definition of “Forcible Entry”.  If someone unlocks my car doors in the same way the AAA man does with what is affectively a coat hanger – that’s not going to leave damage.  Yet, per the policy language defining that term – actual damage has to occur.  Reference forcible entry section:

Thus…their loop hole.  Unless they broke a window – your bike won’t be covered.

Speaking of lack of coverage, let’s talk about straight up damage.  Probably the biggest concern for most folks is simply crashing and having the bike damaged.  On a carbon frame that can mean the end of the bike’s life.  So what does it say about crashing?

Well, it’s actually not too bad.

There’s 13 exceptions – but none of them seem to cover scenarios I think occur regularly.  Stuff like corrosion or manufacture defects aren’t covered – which is fair enough, as I wouldn’t expect those to be covered.  I just want to be able to crash while training or racing and get a happy bike.  And as long as your racing in a non-ITU triathlon – you’ll actually be in good shape.

But you folks which are single-sport cyclists…you’re pretty much hosed.  Because at the end of the list of damage exceptions, there’s this little nugget:

Translation: Every cycling event out there.

The kicker here is the low dollar amount.  They know that in the case of an average crash it’s unlikely that you’re going to destroy both the wheels and frame – so they’re hedging that you’re only destroying/breaking some of it – just enough to stay under that limit (or enough for them to repair).  Basically worming their way out of paying.  Of course for road racing cyclists – the draft-legal packs are the heart of racing.  That’s where the crashes happen, and it’s simply a fact of life for roadies.

But I’ve actually saved the best nugget for last: Replacement.

Assuming you manage to eek by and not get whacked by one of the 398 different exceptions in the policy, it finally comes time to get your goods replaced with stuff just like you had before.

See, they’ve added this into the policy at the beginning of each and every section:

What this means is that they don’t actually have to give me back my Cervelo P3C with a Quarq Power Meter and HED3 wheels.

Thus, at the end of the day, I don’t see how anyone would actually buy this policy.  The exemptions manage to cover just about any usable scenario.  I see very very very few cases where I’d actually get back money or my bike.  While in theory it’s a good policy for simply crashing your bike and getting it replaced – I worry heavily that the above ‘like kind’ exemption will basically mean you’re going to get back junk or no-name brand bike or bike parts.