Running into a Parade, Cycling in Circles, and Crushing Cardboard 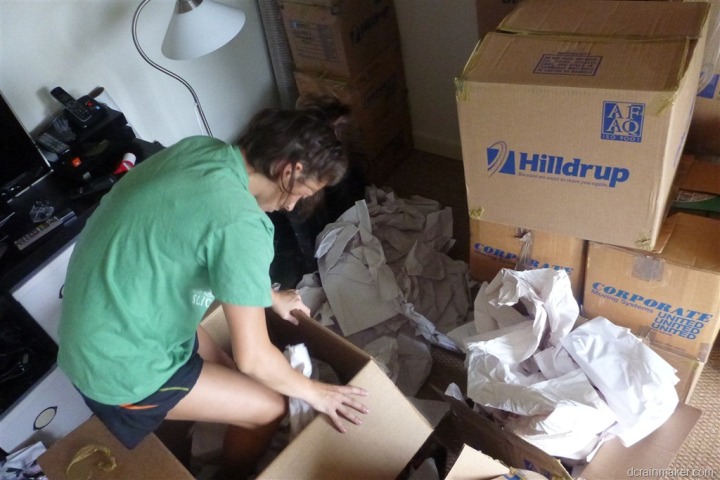 But first up – Saturday, Bastille Day!  Bastille Day is France’s equivalent to the US’s Independence Day (well, mostly, not quite a perfect equivalent, but close enough).  Like in the US, they have all sorts of parades, parties and celebrations.  Though, it seems (at least in Paris) to be a bit more formal from a celebration standpoint, primarily the parade, which is Europe’s oldest.

We had planned to sleep in a bit, but the French Air Force had other plans.  At some point in the morning, enough fighter jets buzzed by our windows to re-start WWII.  I later caught photos of just one of the many formations of helicopters during our run: 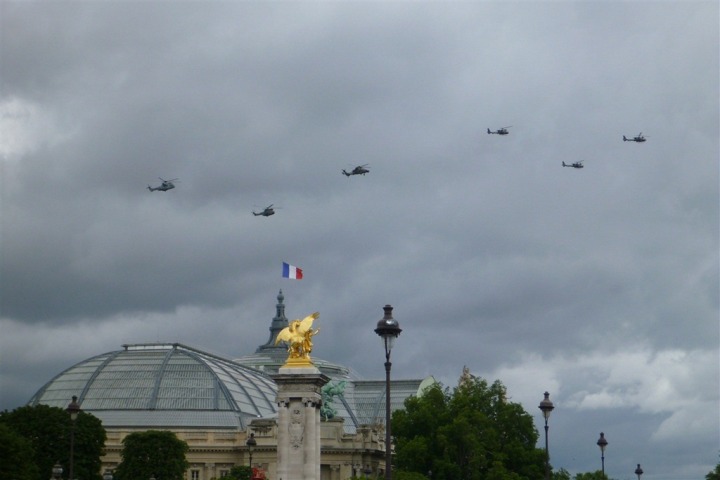 Speaking of the run…with The Girl’s sister (and another Friend) in town for the week, we headed out on a nice easy 10K run.  We figured we’d wander up/down the Siene.  At first, this worked out really well – with a combination of roads closed for the parade, as well as the usual weekend closures. 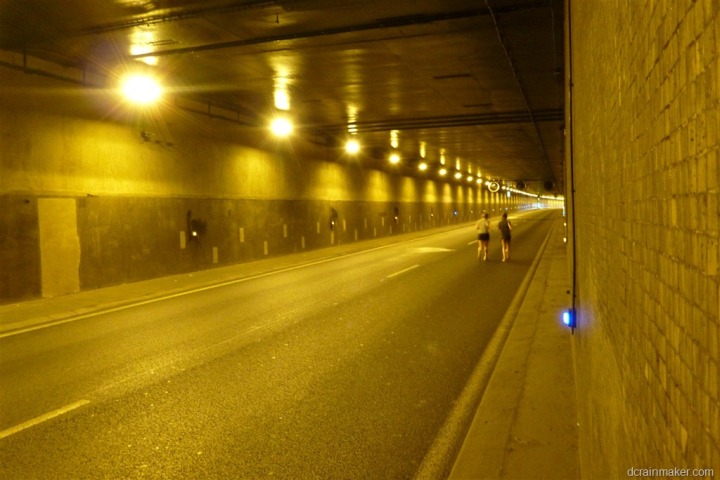 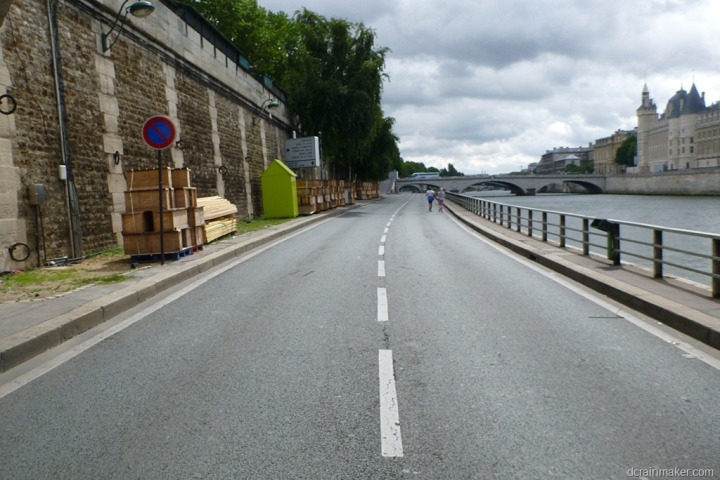 Soon however, our run came to an abrupt stop, as our route was cutoff by a bunch of really big tanks.  Well, and what I presume to be millions of people, watching said tanks and other assorted big vehicles and well dressed marching peoples. 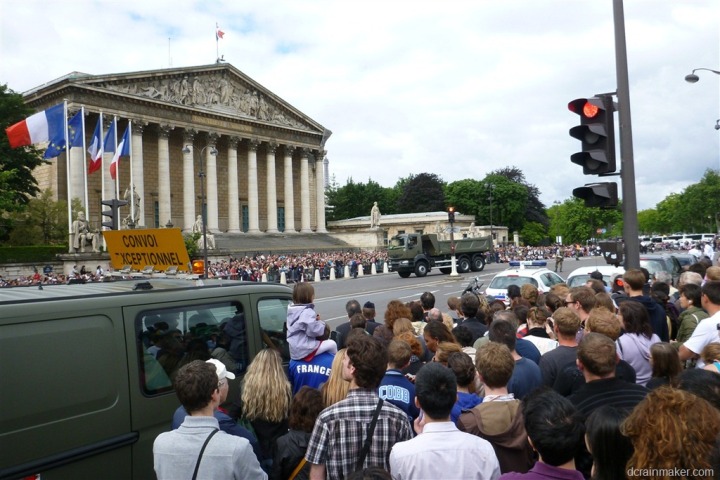 This was towards the end of the parade route, after they marched down the Champs Elysees  and then passed the presidential viewing box.  In fact, that first part is a similar portion of the route to that of the finish of the Tour de France.

Eventually, we found our way past (well, under actually), the crowds and parade, and were able to continue on our run.  Ultimately, we ended up at the Eiffel Tower, which strangely enough had a giant disco ball hanging from it: 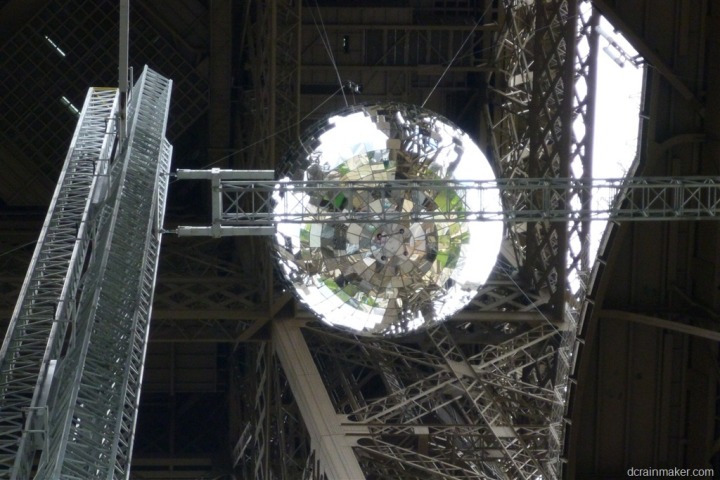 This thing was like the size of a airport shuttle van – just hanging there.  It was all part of the Bastille Day festivities.  The Eiffel Tower would be just in front of the giant fireworks show that occurs later in the evening.  And this year, the theme for the night was ‘Disco’, hence, the giant disco ball (speaking of which, where exactly do you order such a disco ball? The largest ball I could find on Amazon was a measly 20”).

After hitting up the Eiffel Tower, we headed back towards the parade route, ultimately passing the Esplanade de Invalides, which is simply the giant grassy area in front of the Invalides – that building you see in the background.  Though today, this would serve as a massive helicopter landing zone.  The helicopters in the first part of the post were landing here, and you can see one just about to touch down (in front of the gold dome).  Sorry for the fuzzy photo, it was raining. 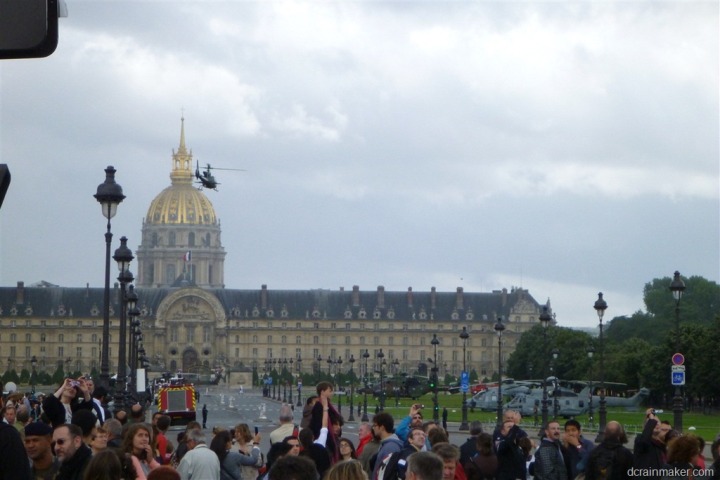 Speaking of rain… In general, the weather in Paris is downright confusing right now.  One moment it’s sunny, the next raining.  Sometimes, it’s literally doing both – as you see below.  Water was falling on our heads at the same time that we were basking in sunshine. 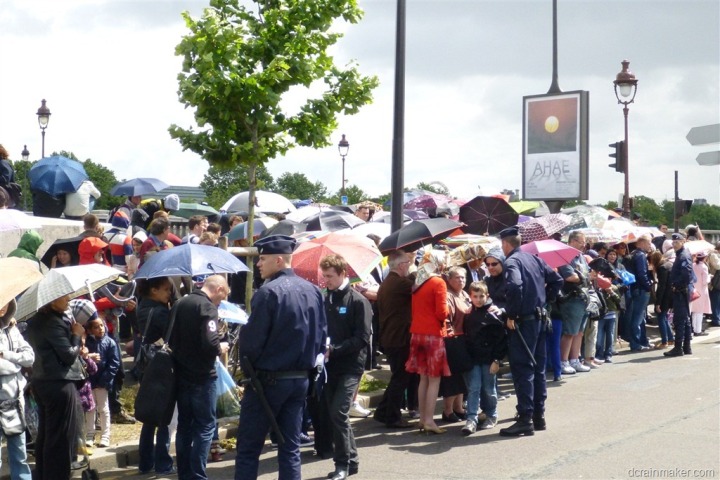 For the most part, people around these parts are wearing winter parkas.  The highs the last few days haven barely hit about 70*F, and the lows are in the 50’s.

Here was one brief moment where the sun came out.  Note though that the crowd clothing selection has a mix of heavy jackets, light jackets, no jackets.  Just general confusion on what to wear. 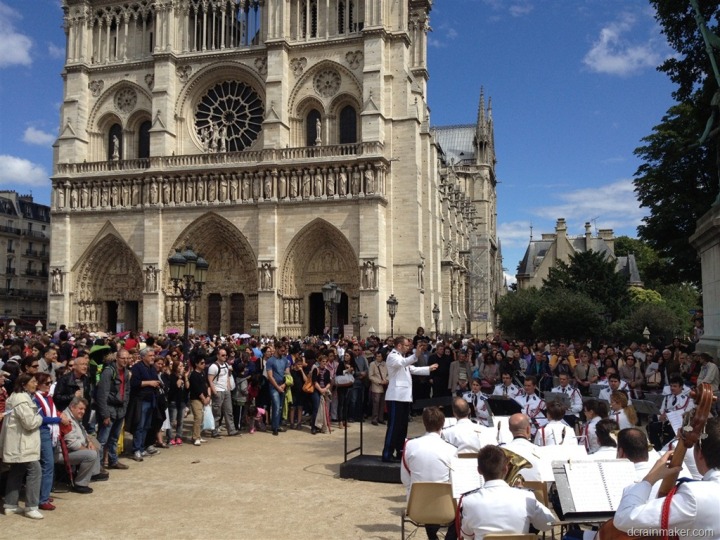 On the bright side – the non-hot and non-humid weather means that cycling around the city on bikes is great!  No hot and sweaty mess.

We wandered all over the place.  Between The Girl, here sister, and their friend – I was in good company. 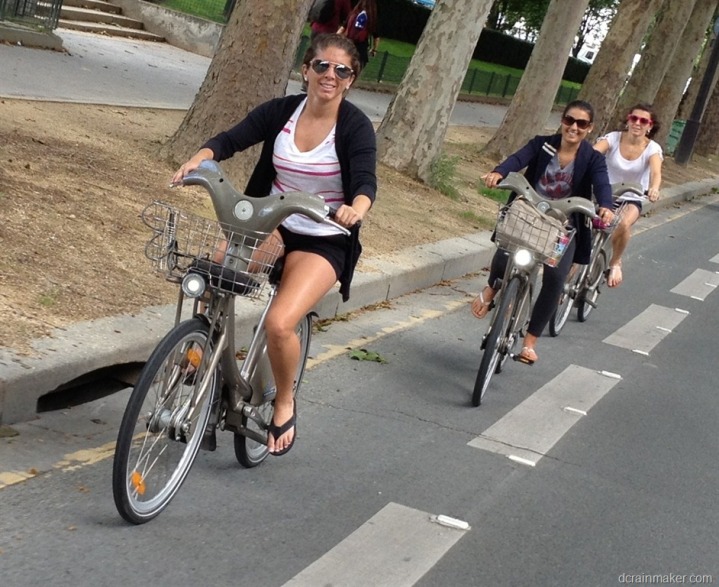 And of course, biking to dinner means you can justify appetizer courses like this (really, we couldn’t even make a dent in this – we’re not sure why they gave us this much). 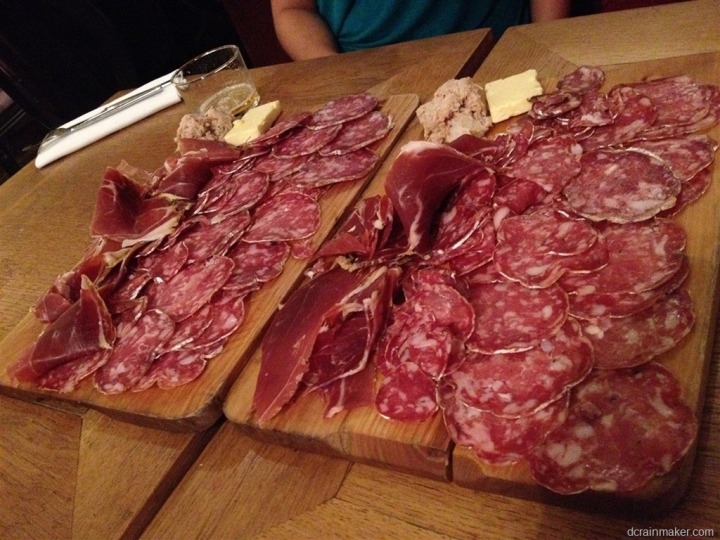 Speaking of cycling – Sunday I took my first crack at bringing my triathlon bike out and trying to get in something representing a long ride.  By long, I mean about two hours.  So more like a short medium ride.

The first challenge was just successfully getting out of the city.  There were some moments (like below), where I was reasonably certain I was about to end up on a freeway onramp.  No amount of Google Map view was helping the situation. 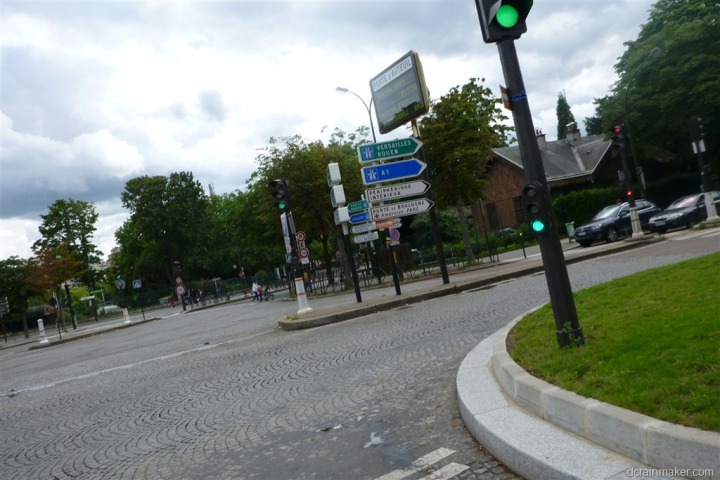 Thankfully, I barely avoided the highway, and ended up at the below, the Hippodrome de Longchamp.  Hippodrome simply means Racecourse.  And Longchamp is the place.  But on the outside of the race course, there’s a roughly 2-mile loop that cyclists (and runners) can use, and it’s virtually car-free. 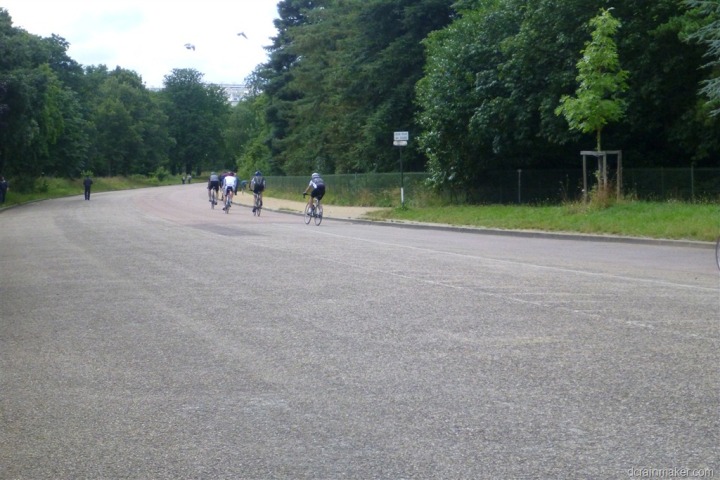 On the inside of the loop is the horse racing track.  It looks all swanky. 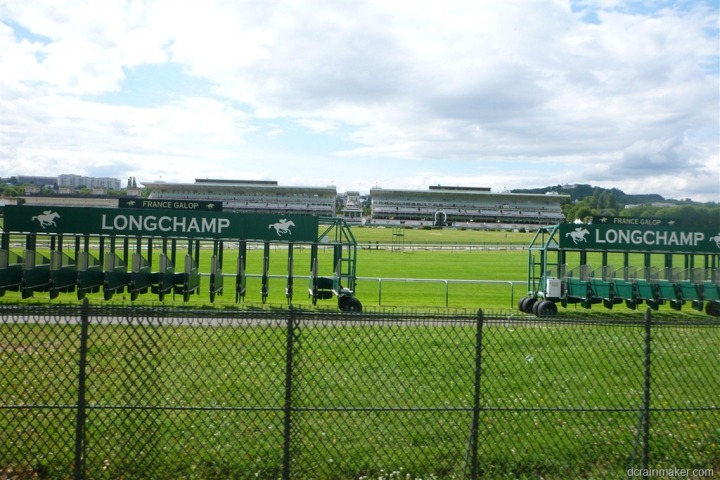 Today I was riding with two new pieces of technology.  The first was the Joule GPS.  This is CycleOps first foray into the GPS cycling computer market.  I’m just getting the hang of it, though for the most part the menu and dashboard system remain very similar to the past Joule cycling computers.  There’s new pages related to GPS tracking – such as the below showing the loops around the horse track as I completed them (I restarted my ride after my 30 minute journey from the center of the city). 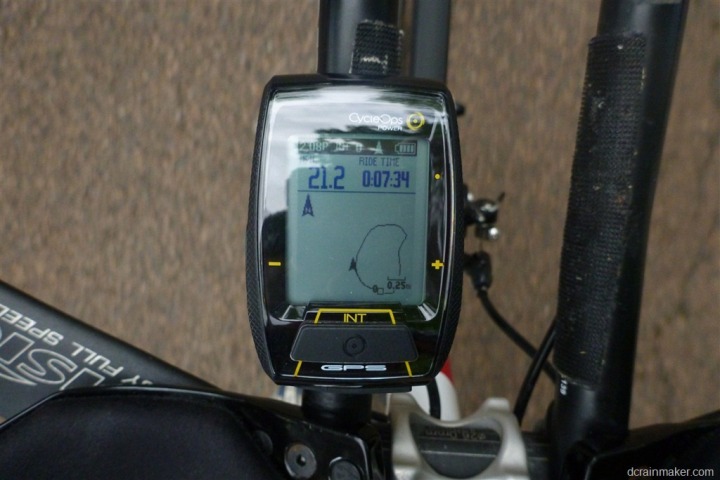 Here’s another dashboard view.  Sorry for the reflections, always a bit difficult taking shots on the bike with the sun. 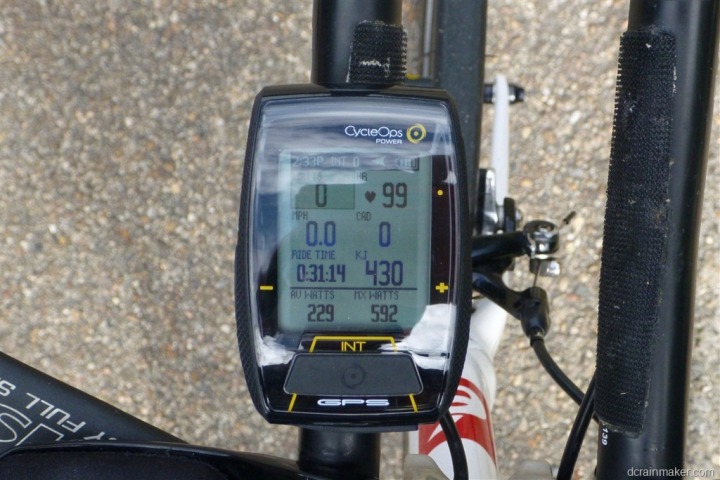 The other new item on the bike is the Power2Max power meter, which is seen here inside the front chainring (where the big ‘2’ is).  The Power2Max broadcasts ANT+, so it easily paired with the Joule GPS.  Additionally, there’s also a PowerTap G3 on the rear wheel for testing, as well as the Polar/Look Keo Power Meter pedals (planning on that review in the next 10 days).  It’s like the trifecta of power! 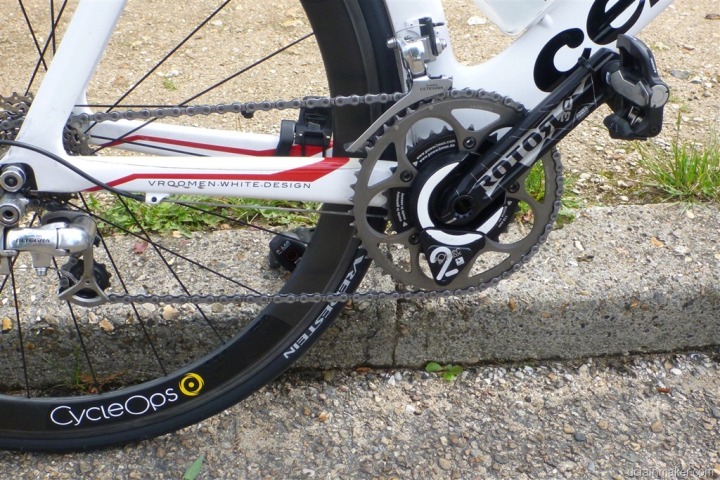 And finally, here’s a a look at the Joule GPS from the side profile view.  I’ve gotta get rid of the Velcro on my bars, which used to hold a water bottle there.  The problem is pulling up the velcro will leave all sorts of sticky grimy stuff.  Anybody got any recommendations for cleaning it off (that won’t leave scratches)? 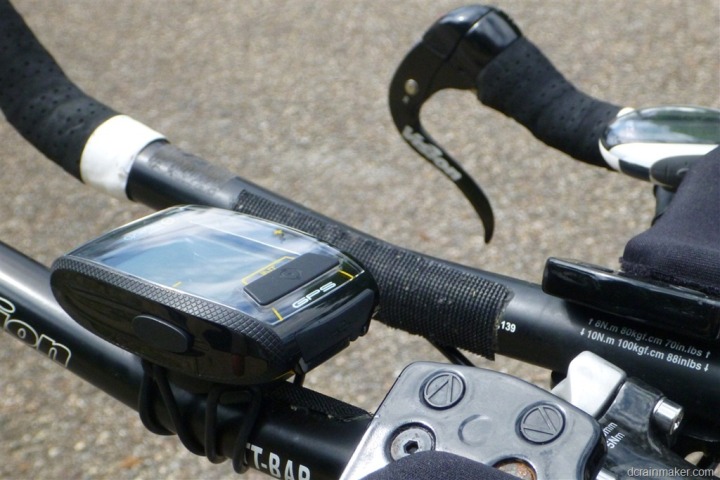 After about 30-40 minutes of fairly fast loops, I headed back into the city, which took another 30-40 minutes to get back.  I’ve still gotta work on optimizing my route back in, both for the highest speed route, as well as the one with the least cobblestones.  Me and the cobbles are definitely not BFF’s…yet anyway.

Hope everyone has a great week ahead, and thanks for reading!