Riding along in a fog

Before we get to my foggy ride, we’ll start with my trail run.  Coach and I made a last second change of venue to Prince William Forest National Park, instead of Fountainhead.  The reason was that he came up with a route that better mimicked some of the aspects of the Escape from Alcatraz course – which is a blend between on-road and off-road.  So my Saturday route consisted of the same terrain. 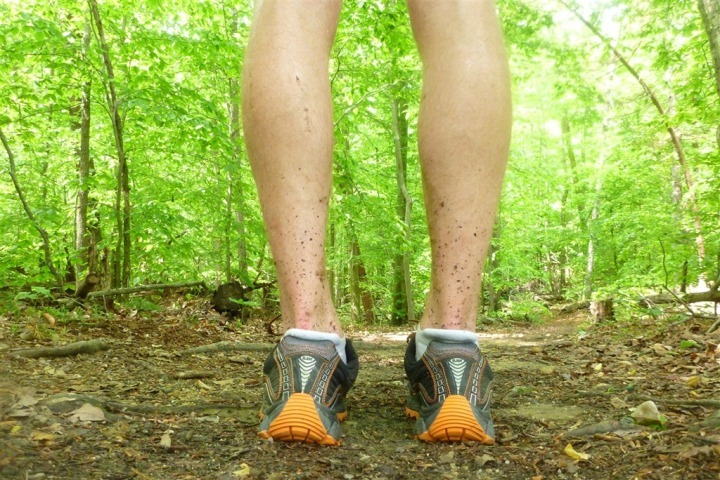 Roughly half of each 6.75 mile loop was trails, much of it along a small stream.  Some of the terrain was more wide open and quickly run, like below: 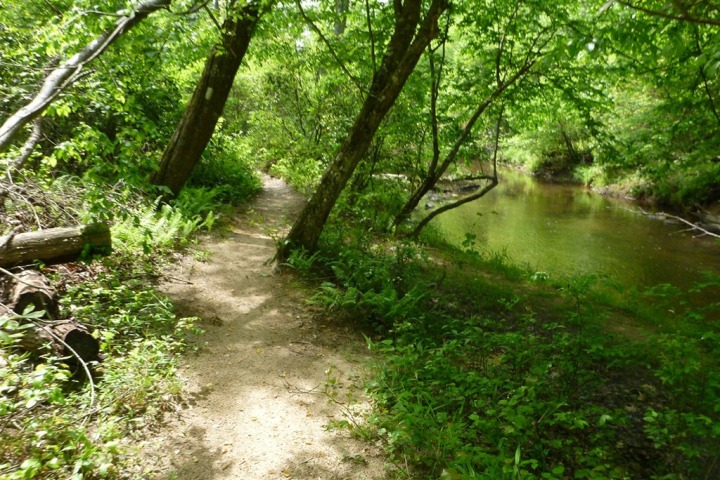 And some of it had some rocks along the way that were trickier to navigate.  At Fountainhead last weekend, there wasn’t much in the way of rocks – so I didn’t get much practice there.  Like anything else, you learn to adapt, so they slowed me down a fair bit as I tried to get the hang of them. 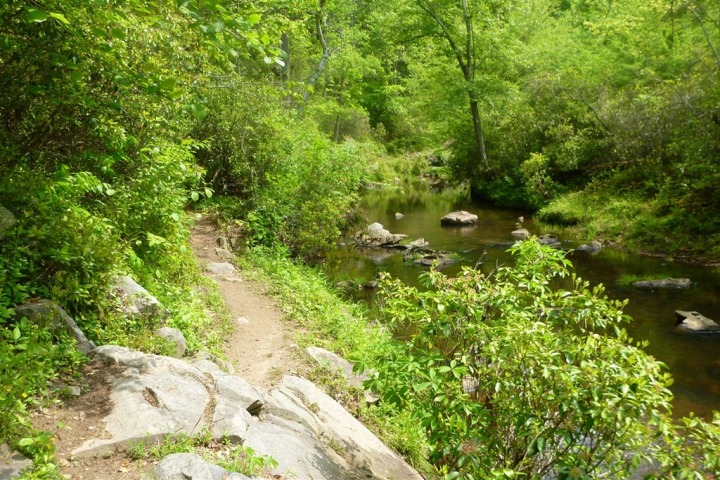 Oh, here’s me.  I’m really enjoying trail running.  You don’t quite get the same paces as you do out on the road, but the time goes by really quick.  Especially when I’m running new routes. 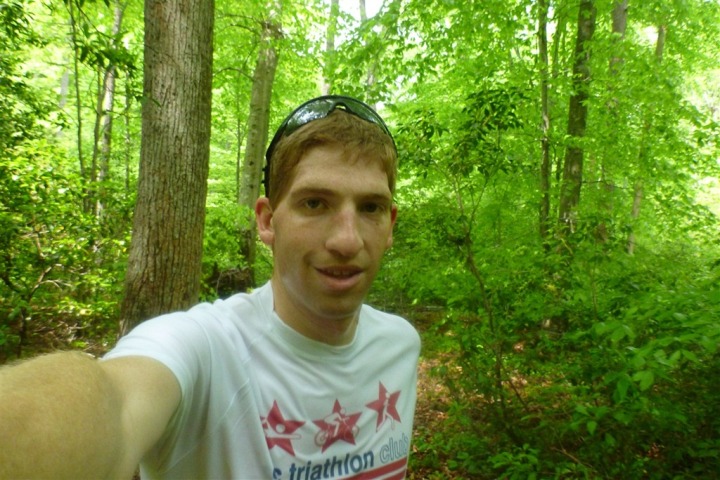 Eventually, the first and last portions of each loop were out on the roadway.  The first portion was relatively flat, but the last portion of each loop was a @*#U$(*@#$#.  That curve you see up ahead is just the first piece of a fairly steep hill that hurts whether your running or cycling (going up).  While cycling (going down), I can easily hit 45MPH with just soft pedaling.  It’s crazy steep (and fun). 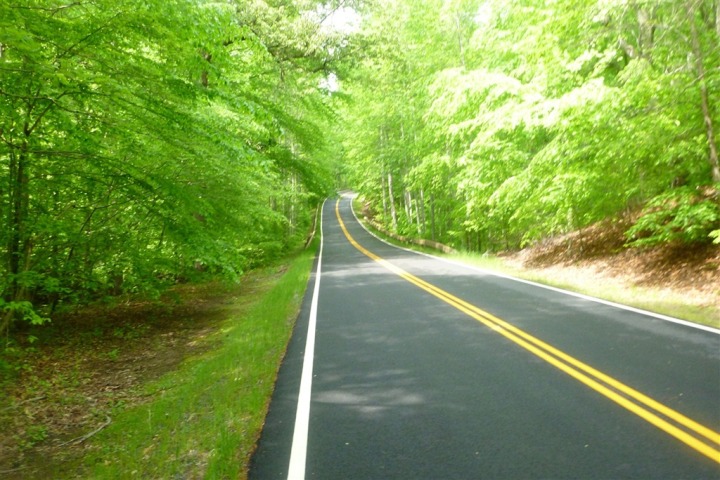 I was having some heel area issues with what I believe may be stemming from my new trail running shoes.  Perhaps not breaking them in correctly, or perhaps just the different surface and using different muscle groups.  Either way, I was hurting with each right footstep – so I bailed after the first loop since things were getting a bit ugly.

But, I was happy to see that both units were pretty close again (6.75 miles to 6.71 miles).  Not too shabby.  Note, I’ve configured both units for 1-second recording.  Also, I haven’t actually seen any pattern in the trees that indicates one is always shorter or longer than the other.  Out on the road, I do tend to see the Ambit always just a bit shorter than the FR910XT. 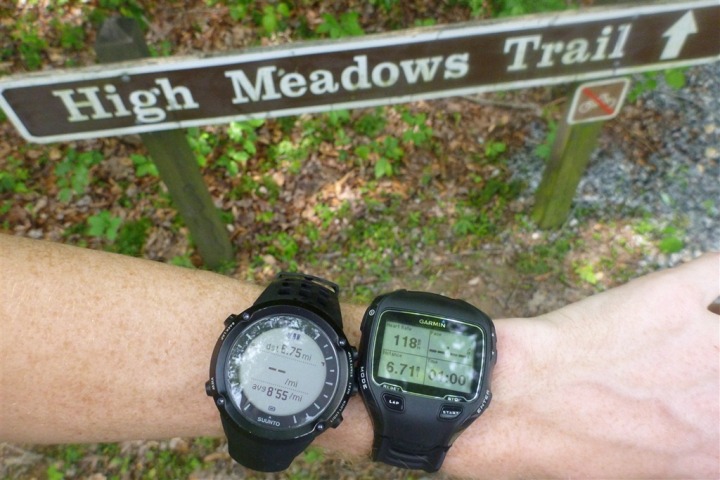 Sunday I got a bit of a late start to getting out on the road for my ride.  It wasn’t entirely intentional, but just sorta worked out that way.  I spent a good 90 minutes futzing with both a stuck screw on my cleat, and time with  the Polar Power Meter Pedals in swapping them to my triathlon bike.  The bulk (60-70%) of that time being the cleat issue.

With both of those solved, I made my way out to the mountains to ride along Skyline drive again.  The drive out there was looking so-so on weather, but as I neared the ridgeline, it got fairly sunny, so I figured all was good.  I went ahead and stashed my collection of random bits of nutrition.  It was pretty much just a ‘clean out the race bag freebie bin’ kinda day. 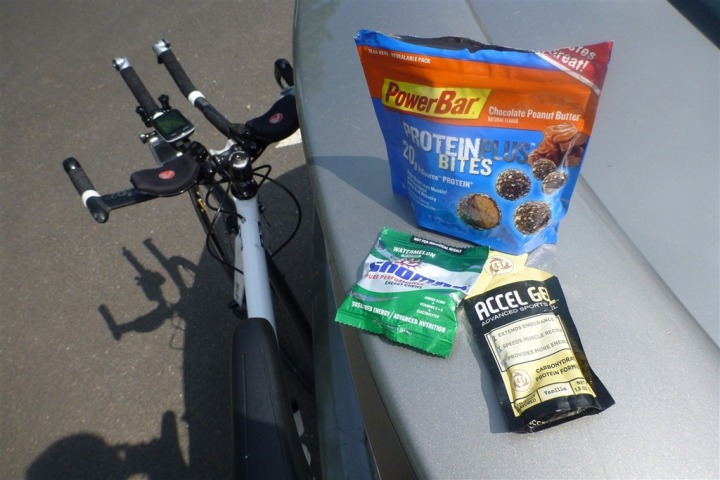 A few minutes later, I was up and on my first climb – into the nice warm sun: 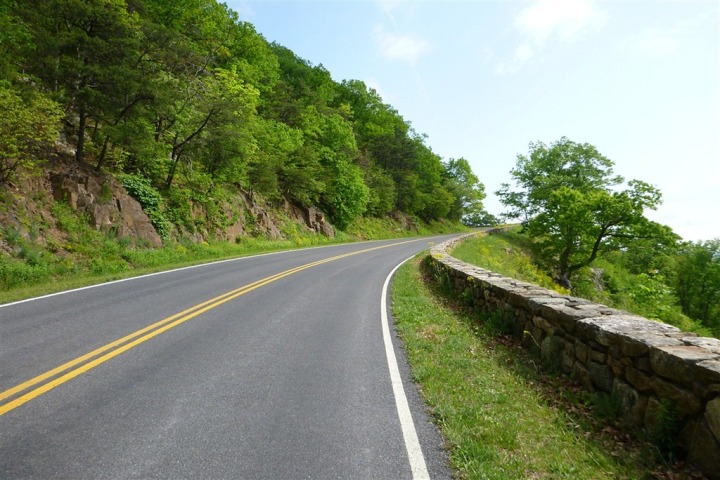 I had my bike pretty well packed with gear for various tests today.  For example, I stashed a GoProHD on the front, not because I’m testing the GoPro (no, I already know that rocks), but rather because I need the video for a different product. 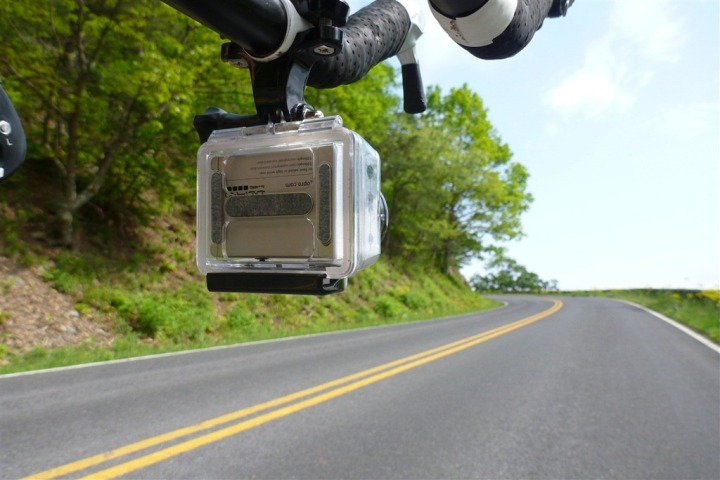 Additionally, I was running four recording units today.  I was interested in three items.  First, was elevation differences using barometric altimeters.  Mostly between the two Garmin units (FR910XT and Edge 800) and the Suunto Ambit.  Secondly, I was interested in overall GPS differences between the GPS-enabled units (excluding Polar CS600X, which was not GPS-enabled).  And third, I needed the Polar unit for the power side of the Polar/Look Keo power system (which allows me to compare it against my normal Quarq Cinqo). 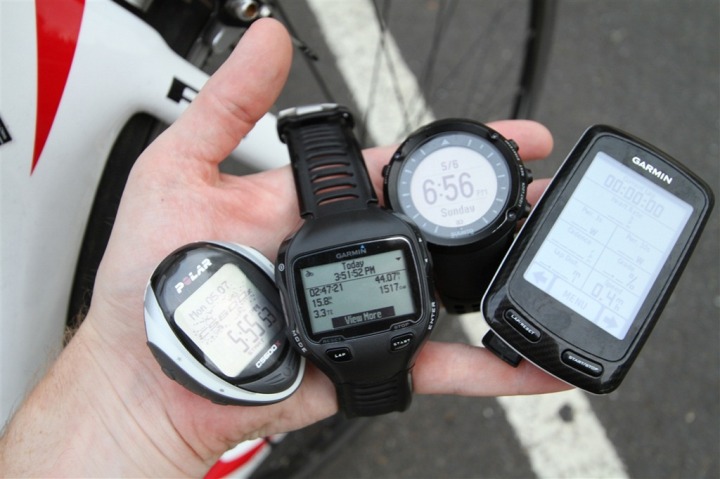 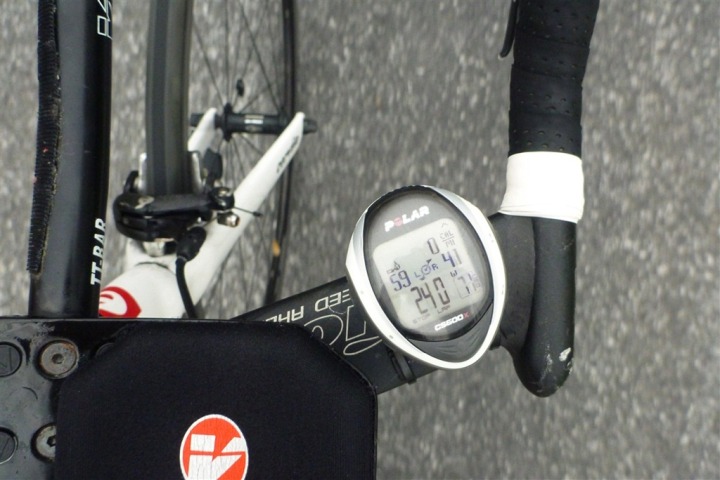 About 45 minutes into the ride, things began to get foggy.  I had seen the clouds covering the ridgeline on the previous climb, and by time I got there they certainly didn’t go anywhere else. 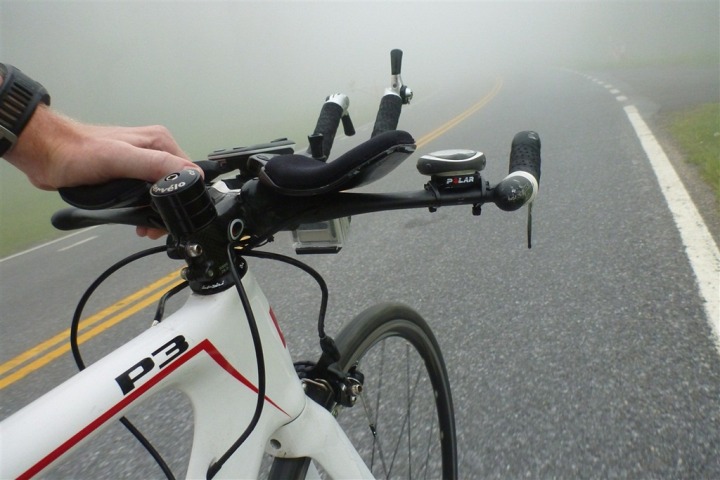 Over time, it got even more dense.  Really impressive actually. 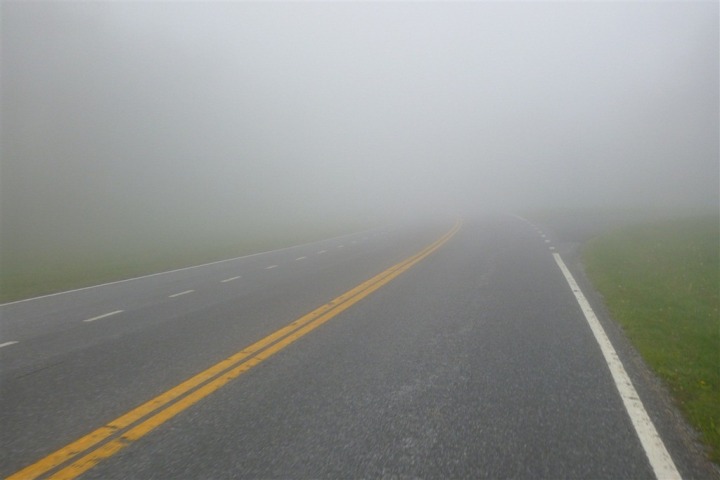 In case your curious what it was like descending, here’s a few minute clip (no need to watch it all, just skip around).  Just to understand how quickly things come out of nowhere, watch at about the :30 (second) marker as I car approaches.  Well, actually, you don’t see the car approaching, it’s just ‘wham’, car.

It never actually rained, but you can see the buildup of moisture on my arm while I climbed.  Just lots of little droplets: 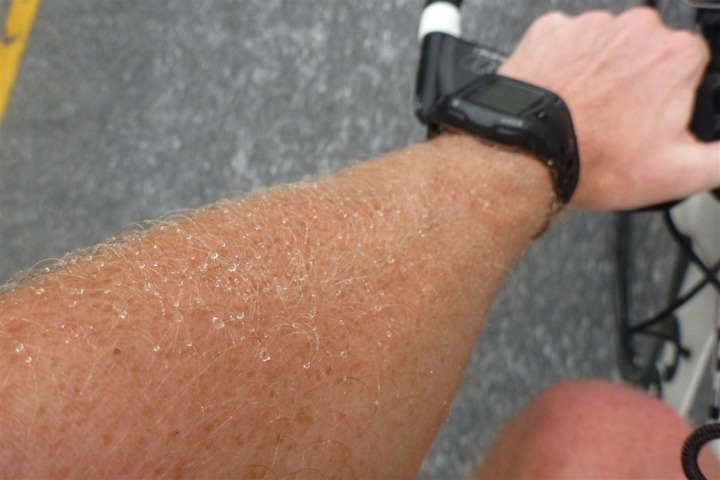 And of course, the self-portrait: 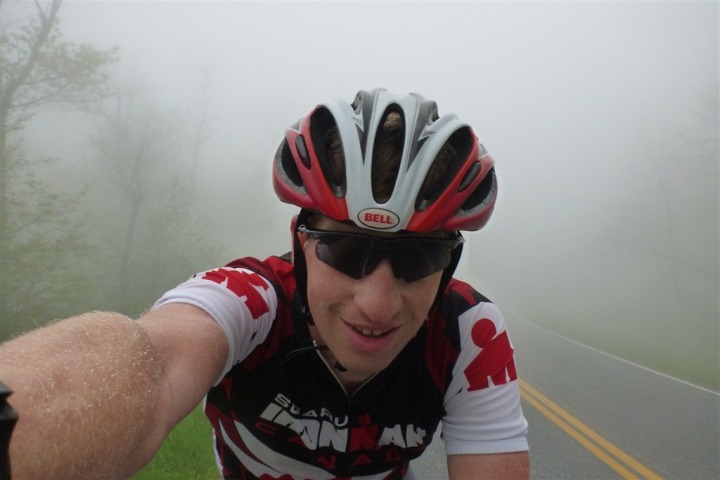 All in, the ride was 44ish miles, all of which were the typical Skyline climbing or descending.  It took a touch bit longer than normal, since I wasn’t able to go quite as fast on the descents as I wanted, since at times I just couldn’t see more than about 2-seconds ahead of me.  My sunglasses often fogged up and became covered in water, plus, there just wasn’t much visibility at times.

Now, as a result of my lack of visibility (in this case, my sunglasses still fogged up from the descent I started two miles earlier), I didn’t quite perform that well for the speed thingy.  Clearly, I need to up my game.

Later on, after finishing, I found this in my jersey.  It’s not that I found a dollar that’s unusual, it’s rather that at some point during my pre-ride jersey addition phase, I actually thought I’d be able to buy anything for just a single dollar.  Not sure what I was thinking, but I do remember adding a single dollar beforehand, but got distracted before I added the ten to the jersey.  No worries, that ten bought my milkshake post-ride. 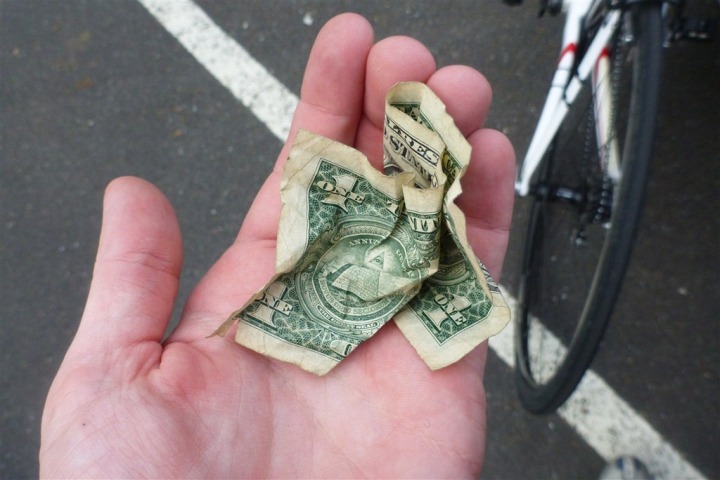 Look for the results of the barometric altimeter tests here in the near future.  I just didn’t quite have enough time to get them all exported and lined up against each other this evening.  On a future ride I may bring along some non-barometric altimeter ones for fun (for example, the Motoactv, Timex Global Trainer, and FR310XT).  Though, it becomes more of a logistical challenge than anything else.  For this test today, it was largely ‘set it and forget it’ affair.  After all, I want to concentrate on my ride (and not hitting Yogi, Booboo, or Bambi) – rather than dealing with half a dozen GPS units.

But, I’ve got lots of good stuff up on the docket for this week.  Thanks for reading, and have a great weekend ahead!