A relaxing weekend in San Francisco

This weekend I was out in San Francisco for the last Men’s Health Urbanathlon of the year.  The event was held on Sunday, but we actually went out Thursday to enjoy a bit of the city and make a weekend out of it.  While I’ve been to San Francisco a number of times, The Girl had never been – so we thought we’d have some fun and relax some.

But mixed into the weekend I also had the chance to sit down with the folks from Basis – who are on the cusp of releasing a watch that aims to measure heart rate 24×7 via an optical blood flow sensor – no HR strap required!  Not only that, it also contains a 3D accelerometer (for measuring a variety of items, including sleep), body temperature (via skin readings), ambient temperature (room/outside temp) and galvanic skin response (skin moisture output).

But, because this post is about my weekend and not about Basis – you’re gonna have to wait a wee bit longer to hear all about them.  Fear not, likely sometime this week.  The good news is that they are not only putting together some pretty interesting stuff – but they are also some cool people.

How do I know they’re cool people? Well, they had Nemo!

Yup, seriously.  The morning I posted about my Shark Blimp – I walk into their offices and see the Nemo Blimp floating there.  Brilliant! 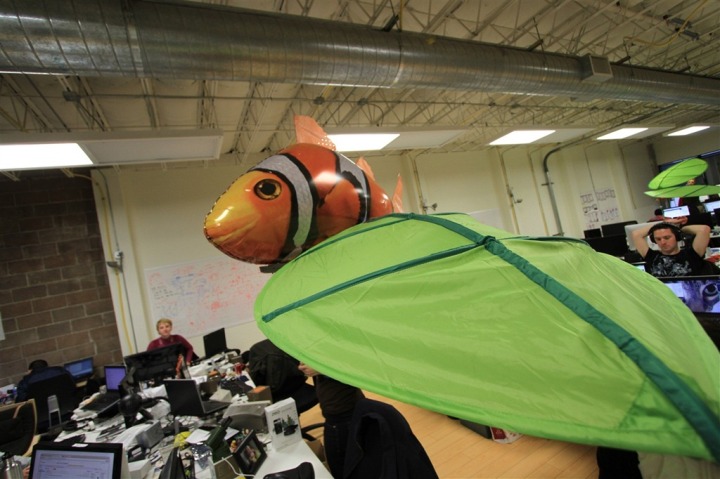 I couldn’t make this stuff up if I tried.

The rest of Friday included hitting up awesome places to eat – like House of Nanking and Incanto  The first being a popular Chinese eatery, and Incanto being a small Italian restaurant.  Here’s a snippet of noodles from the Chinese place. 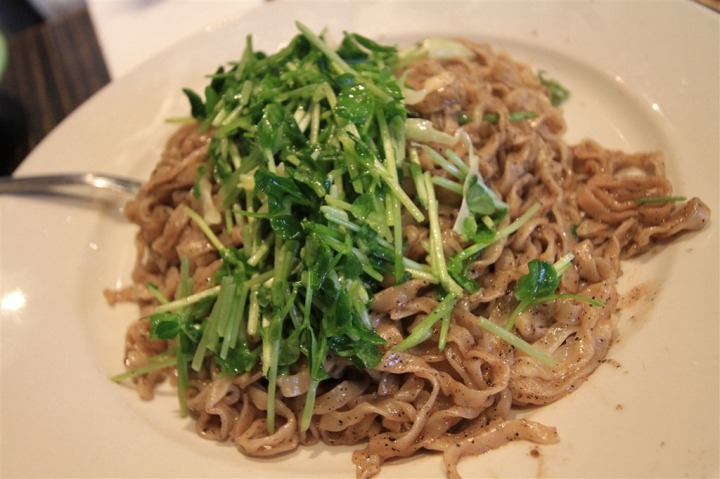 The day ended with a run in the rain.  Mile repeats in the rain to be precise.  We had 6 x 1 Mile repeats to do, and ended up doing them along the waterfront right in front of the Golden Gate bridge.  While the weather was miserable (pouring, cold, and windy), and it was dark out – we still had fun and just ran.

I took the below photo right as we started at dusk: 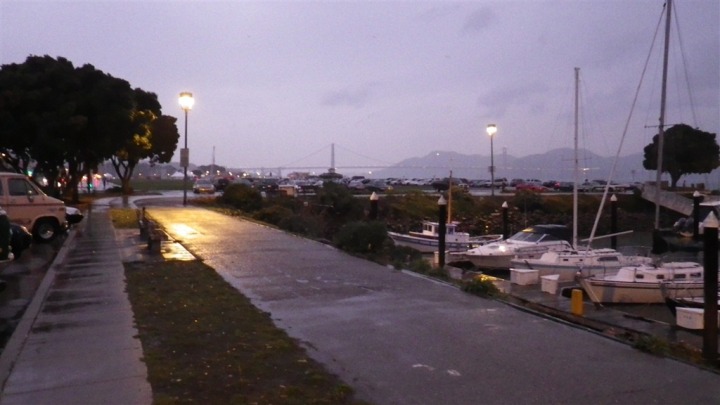 I’m happy to report that after more than 10 miles of pouring rain – Mr. Motoactv is still alive.  Waterproofing seems to be holding up.  Some shower tests are in order shortly.  From a functionality standpoint the touch screen doesn’t have problems in the rain.  The tap to lap button was a bit finicky – but I’ve been finding that finicky even in dry weather. 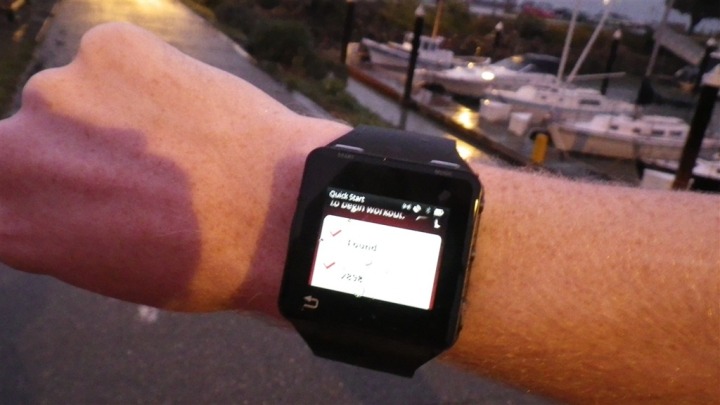 As I got closer to the bridge, the weather continued to get worse.  I snapped the below photos in between my intervals (90 seconds rest). 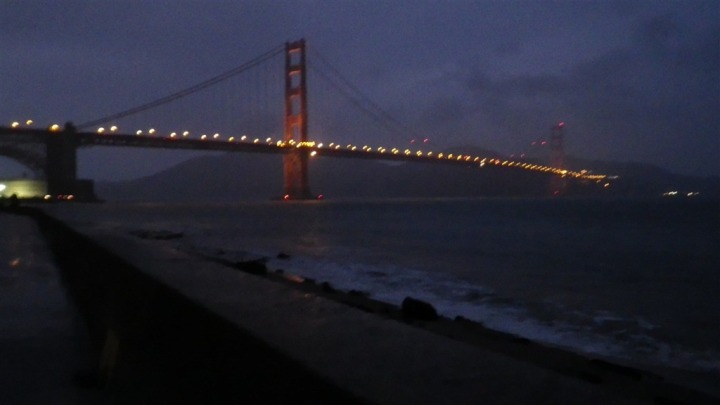 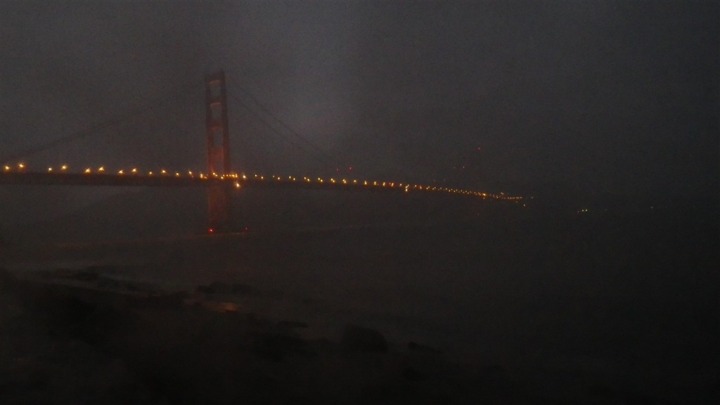 The next morning however – the sun was out and making for a beautiful day!  After sleeping in as much as our east-coast time zone bodies would let us, we played the part of tourist and got some miles into our rental car. 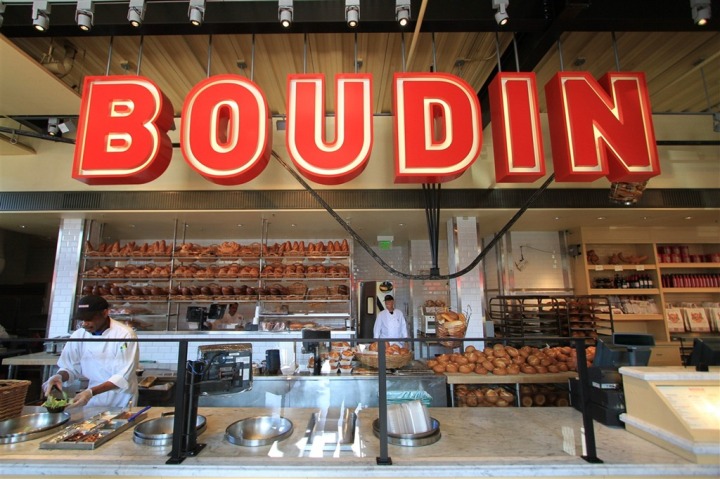 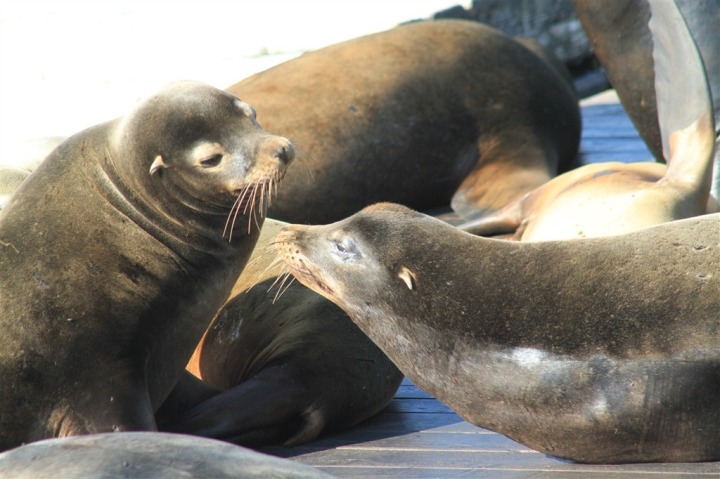 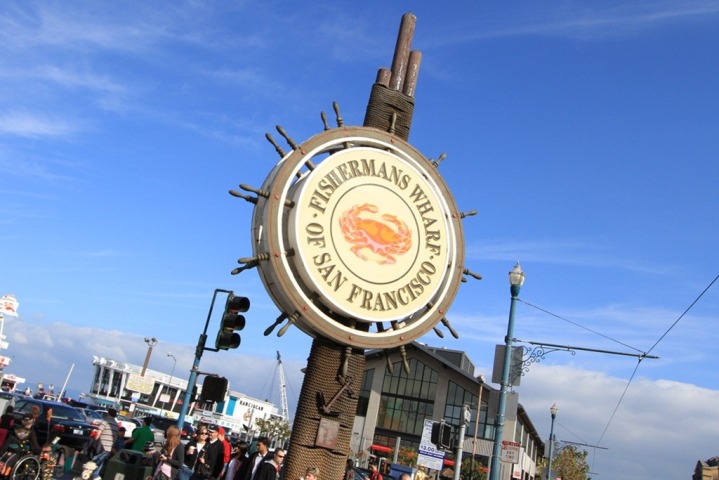 What? You thought we’d bypass the Ghirardelli Chocolate Factory? Oh no…that was the one non-negotiable item of the day. 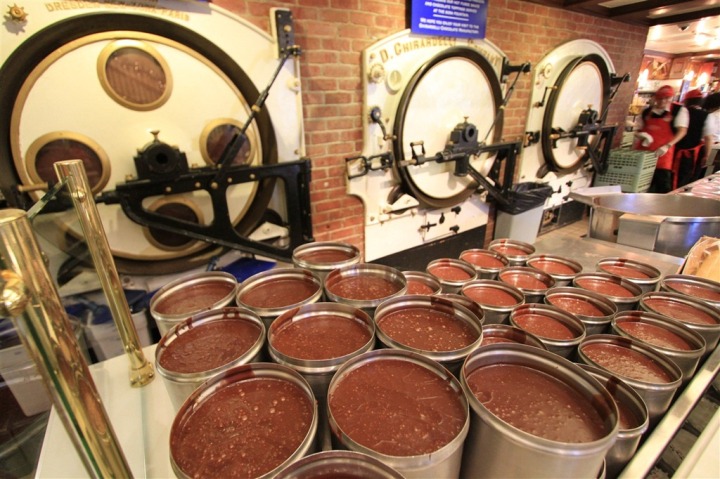 From there we crossed the Golden Gate bridge and explored the Marin headlands.  Beautiful area.  Only wish we had our bikes – tons of cyclists out there! 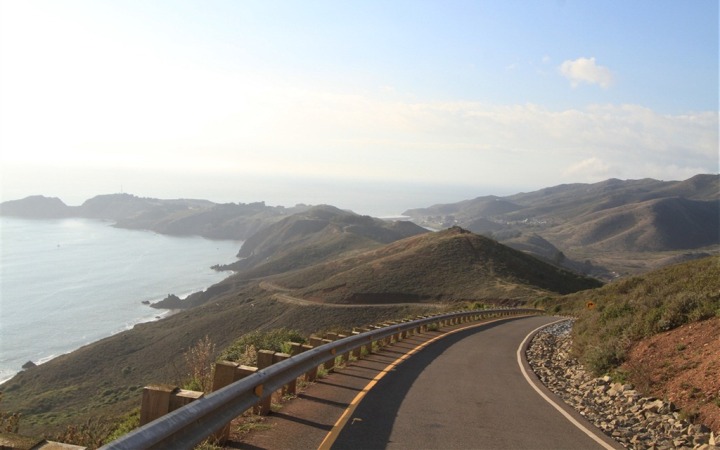 The Sea Lions weren’t the only ones out in the water.  Nope, plenty of surfers as well.  Also saw a number of openwater swimmers down along the waterfront near the Aquatic Park. Lucky ducks! 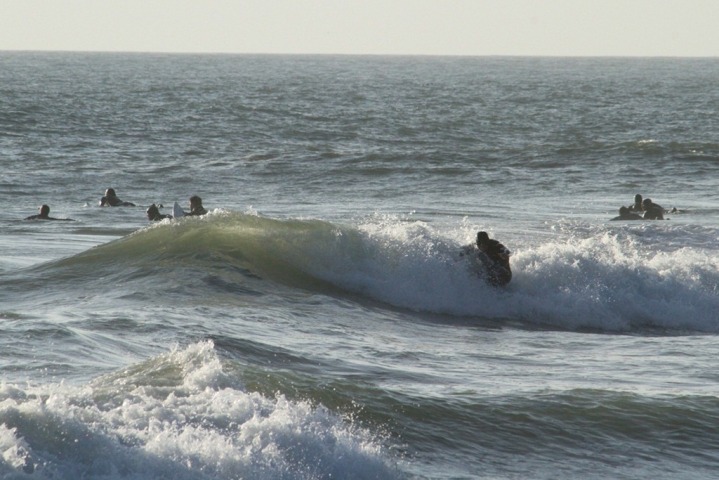 And somehow, the bridge never gets old… 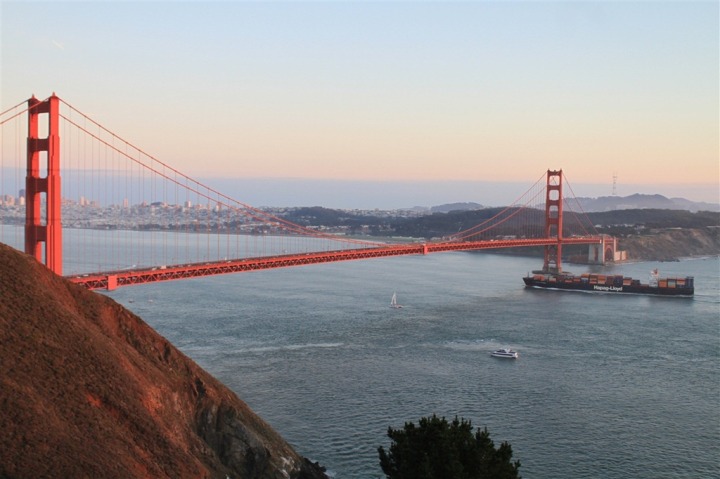 Onwards to Sunday we had the Urbanathlon itself.  Without question – the San Fran course is a beast compared to the other US courses (Chicago and New York City).  A mile into the course you have to climb up to Coit Tower, a relentless hill in the way.  Then from there out it’s one thing after another.  Not to mention the placement of the stadium steps mixed in at the 5 mile marker – as opposed to the end of the race. 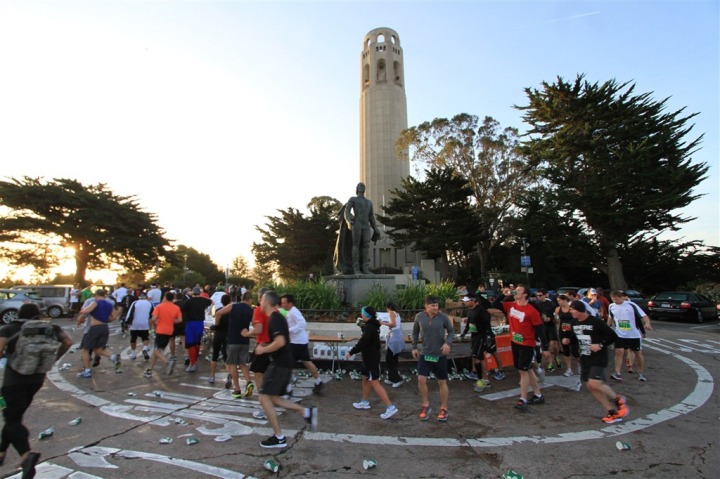 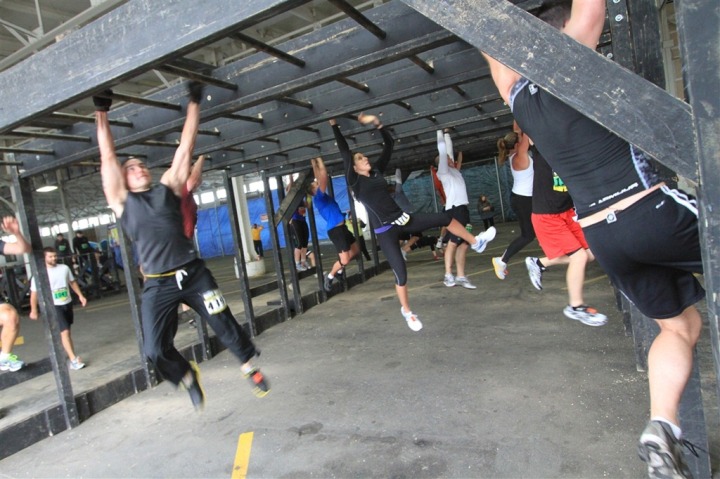 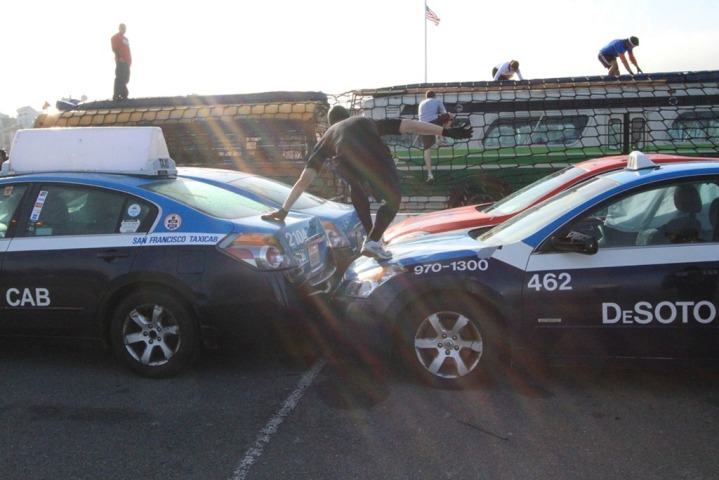 For all the action, swing on over to my massive photo filled post on the Men’s Health blog.

After I was done spectating the Urbanathlon, I got in my last ‘long run’ before the Philadelphia Marathon next weekend.  This time, the long run was only 60 minutes, split 30 minutes Z2, and then 30 minutes at race pace.

I started off along the water near the beach, in the same area that I ran intervals Friday night. 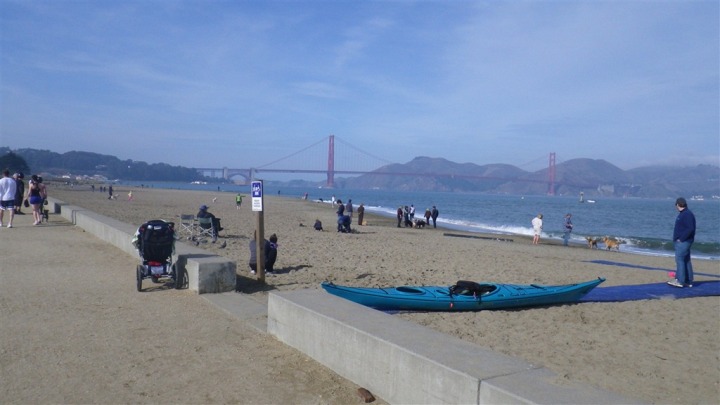 Then for the sake of not having to do endless loops, I made the quick jaunt up the hill to the bridge and ran across it. 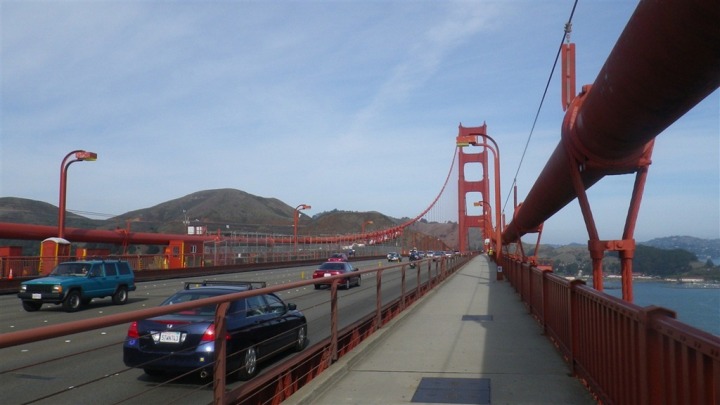 Actually, I ended up running to exactly the half-way marker – merely because I wanted to try and have virtually all of my ‘at race pace’ section be on flat ground.  So I dropped down onto the flats only a couple minutes into that section. 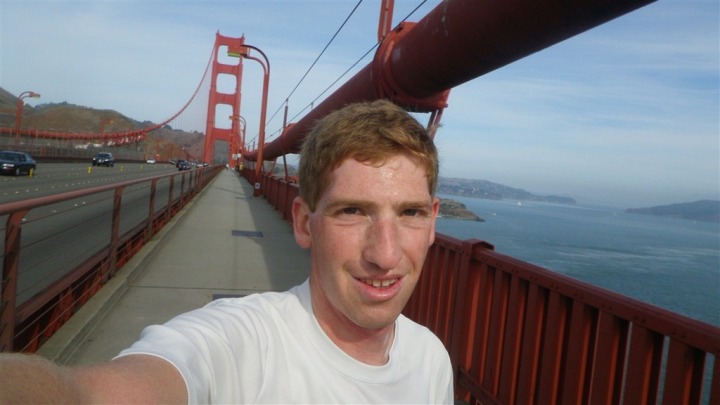 Once back down on the park I knocked out a few quick high speed loops. 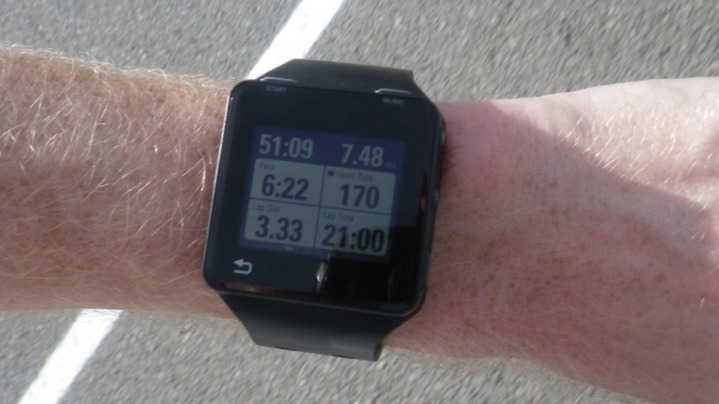 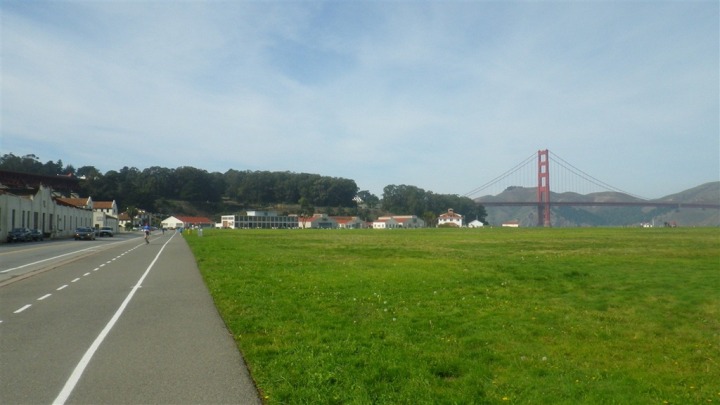 I was pretty happy with my paces on flat land, and more importantly pace to heart rate relationship.

I was also happy to see that the FR610 and the Motorola Motoactv largely agreed – only .05 miles difference.  Not too bad, especially considering the winding steps up to the Golden Gate Bridge.  More than within the GPS accuracy of either device to know which one was truly correct (if either).  The firmware update to the latest version really has made the two almost always match. 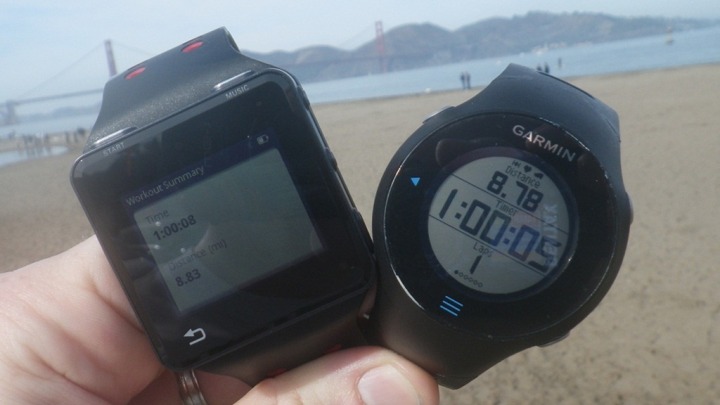 With the run complete we quickly packed up the car, left my small ruggedized camera on top and headed to the hotel.

About a mile later while making a right turn…the camera departed the car and was promptly run over by another vehicle.  Astoundingly – it showed almost no visible signs of damage – and even took this picture of the scene right afterwards: 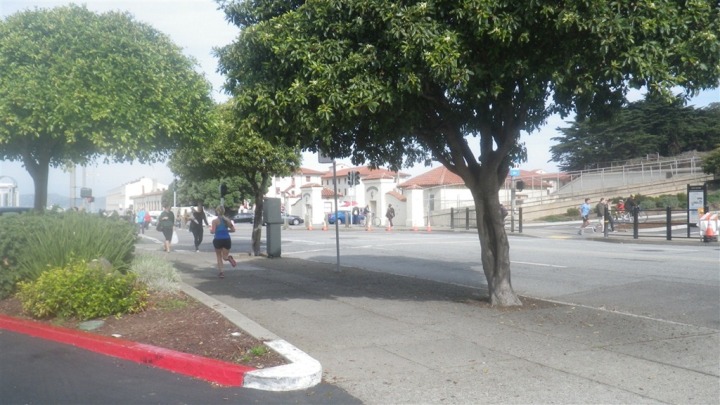 Unfortunately, like many injuries, it’s the internal ones that are more damaging than any external scratches.  While the display looks normal when the camera is off, once you power it on, it shows a rather trippy pattern. 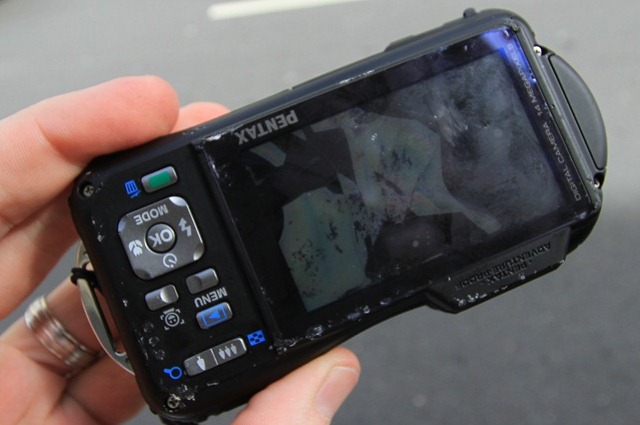